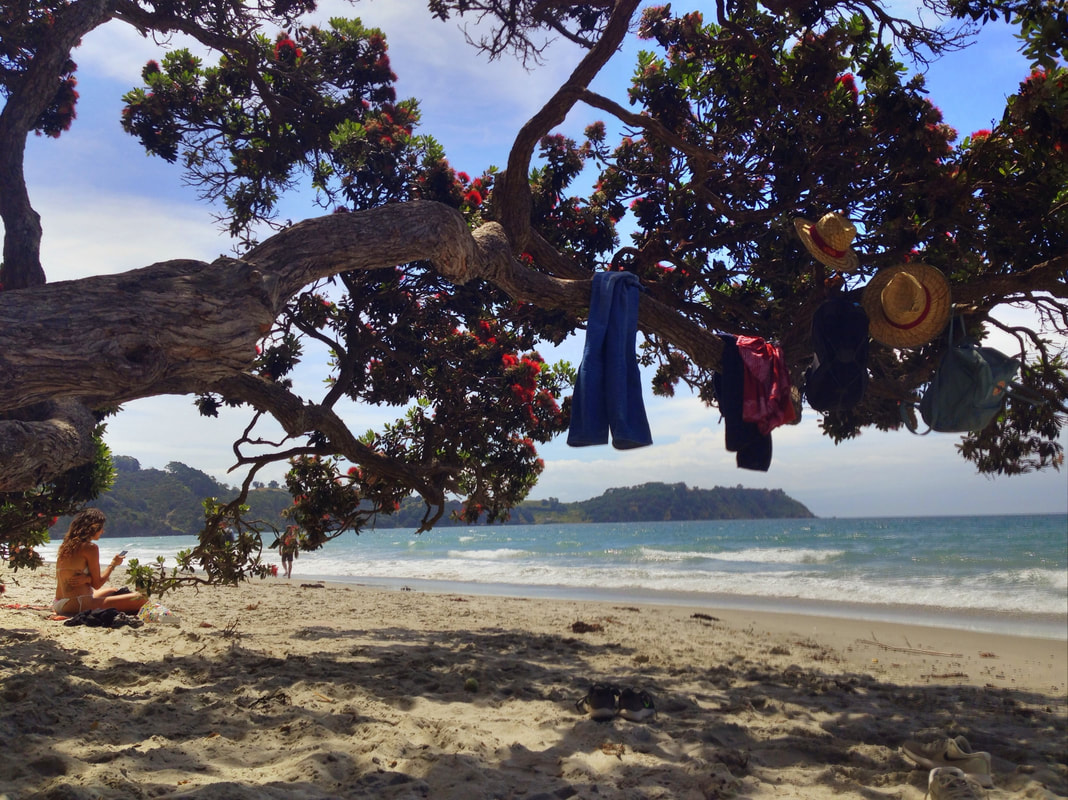 My time in the city always has an expiry date. I find ways to enjoy myself with the suddenly increased choice in art, theatre and nightlife... but it doesn’t calm my soul like the strength of nature can. It’s like a control+alt+delete of the mind. It brings the ever raging stream of thoughts to an abrupt halt, entirely empties the mind with a focus on the physical connection and the state of being and then thoroughly organizes all the thoughts and impulses recently gained, organized by priority.

Luckily, Auckland... loud, traffic-jammed, impulse-swamped Auckland... is riddled with green. Now I’m not only talking about the inner-city reserves, parks and volcanic cones suddenly interrupting the city madness... No, New Zealand’s biggest city is surrounded by Regional Parks* and islands. That’s right, just off the coast the best natural treasures of the north are just a ferry ride away.

* For a report on the volcanic cones and Tawharanui / Shakespear Regional Park check the Auckland blog. For a report on my 4-day trek over the Hillary Trail in Waitakere Ranges, check this story! 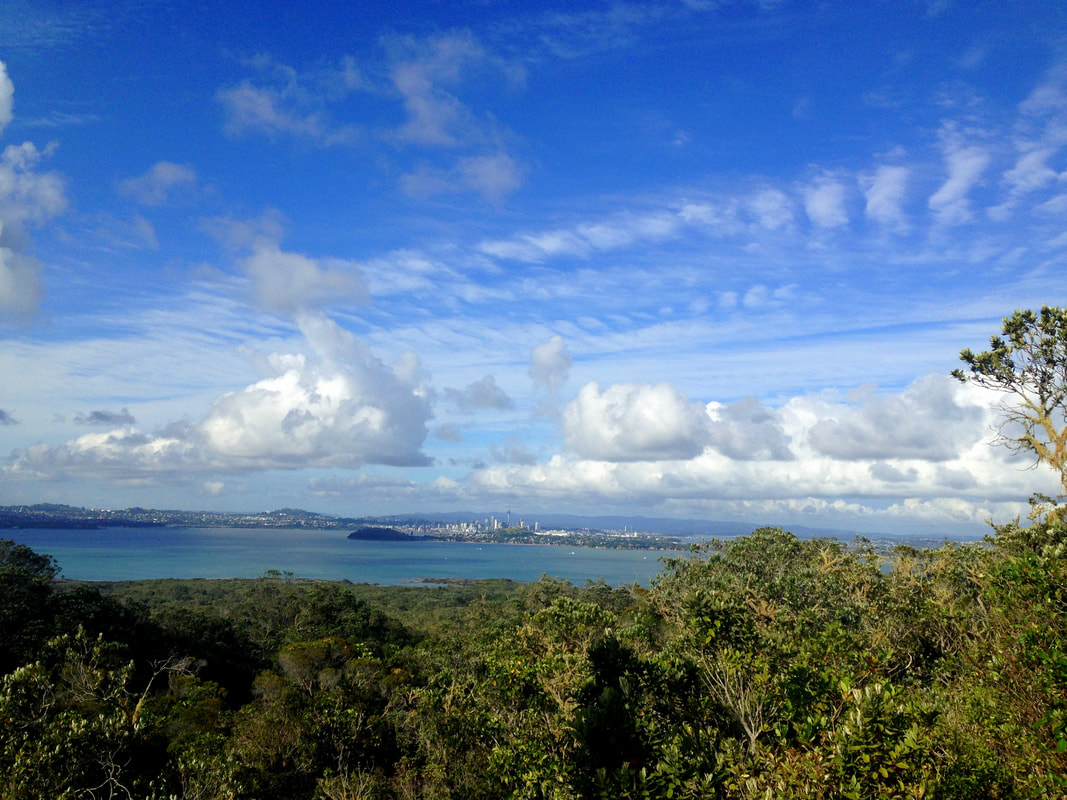 My first little hiking expedition was held on the volcanic Rangitoto Island in the Hauraki Gulf. The island was formed by a series of eruptions that initiated about 6000 years ago, some of them lasting several years! The name comes from the Māori expression “Ngā Rangi-i-totongia-a Tama-te-kapua”, which means “the days of the bleeding of Tama-te-kapua”, referring to the captain of the Arawa Waka who was badly wounded on the island during a battle with the Tainui tribe over Islington Bay. In 1854, during colonial times, the English bought the island for £15 and used it as a source of basalt in the local construction industry. In 1890 it was set aside as a recreation reserve (although during WWII some military bases were installed to support the harbour defences), which it luckily still is. 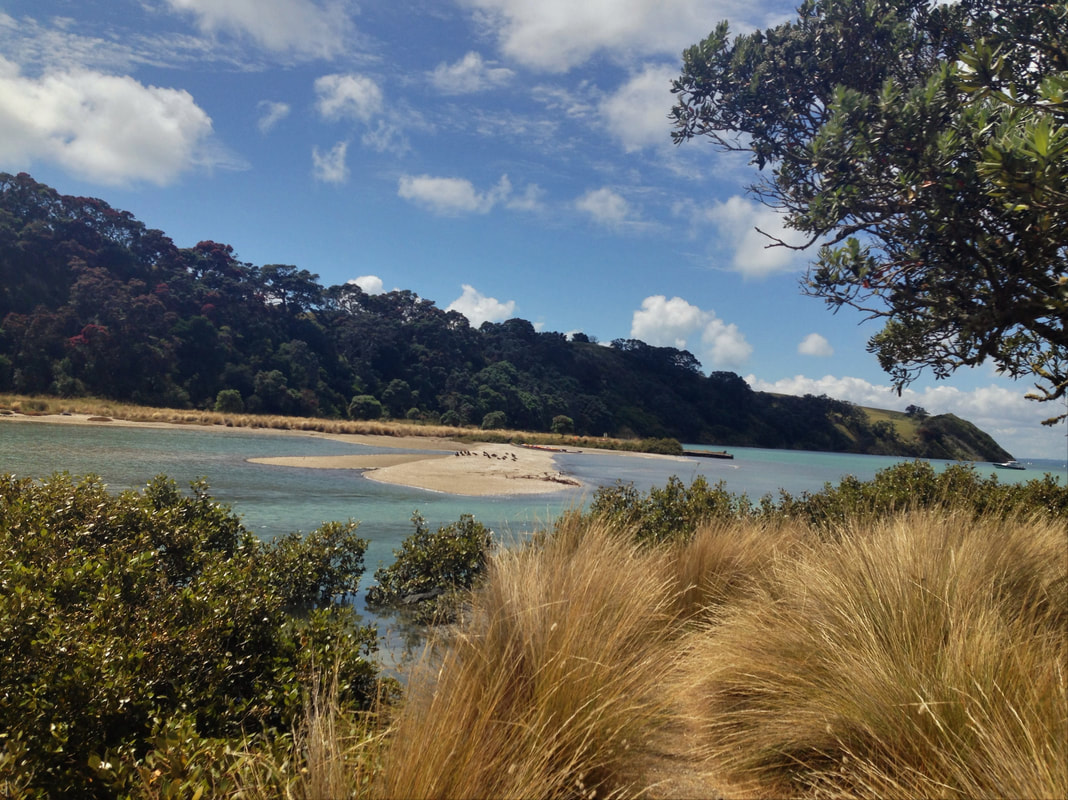 As I always attempt to make the utmost of my money I did some research on cheap tickets. Ha, the Fullers Early Bird special, only valid on Saturday and Sunday if you leave on the 7:30AM ferry is cheap AF. This sounds early, but think of this: Rangitoto Island is the closest one to Auckland and one of the most popular daytrips. Ergo: Entire truckloads of tourists are vomited out on the island, the whole day through... BUT they usually leave at the 9:15 or 10:30 ferry AND they walk goddamn slowly. So if you’re on that early one you’re ahead of these headache-masses. It’ll almost be like you have the place to yourself! 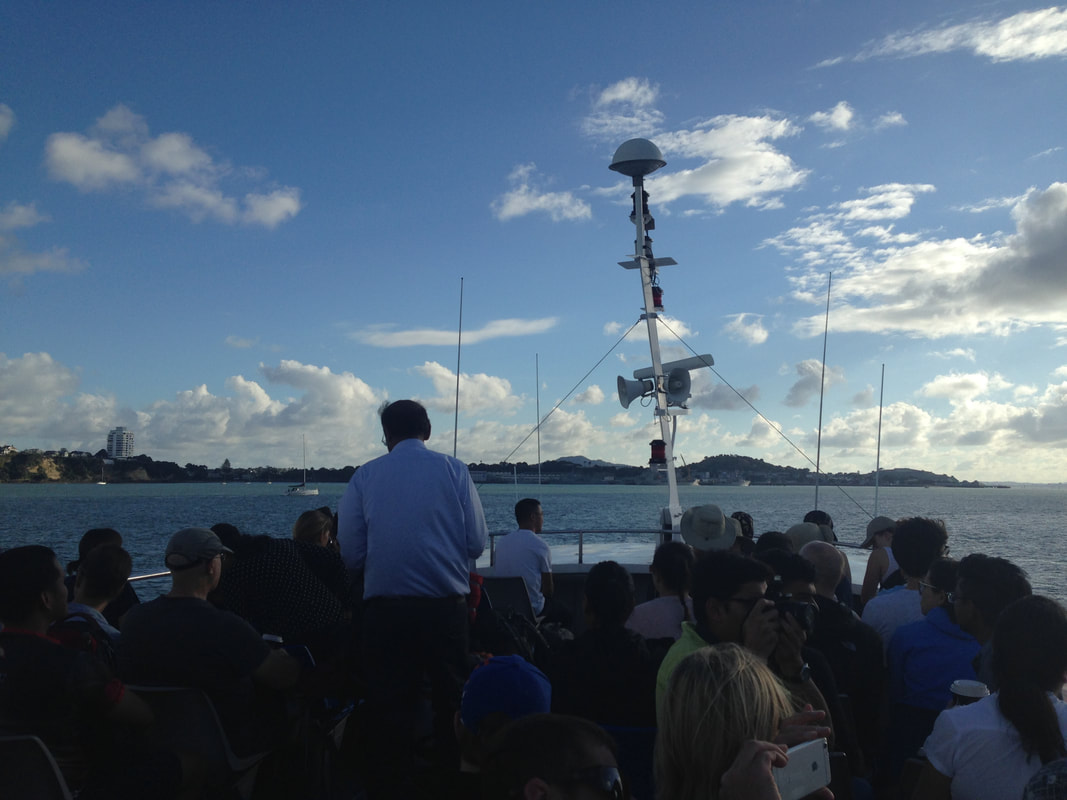 Reality check: Even the 7:30AM-ferry was loaded. Luckily I do walk faster than most people I know and than everyone on that boat, so I was ahead of the game. I had read it takes about an hour to walk up to the volcanic cone, but I was there in 25 minutes. It’s only 260m high anyway. That said, the views are spectacular. Standing on top of one of Auckland’s most iconic landmarks you simply know what it feels like to be alive.
Make sure to take a right along the way in order to visit the lava caves, a truly unique sight! As I arrived the first one there in the morning I could take my time to crawl through the grottos wearing my headlamp, absorbing the silence of ways once carved out by the scorching streams of lava.
As I had checked off all the highlights in 45 minutes I studied my map to see what else I could do, as the day had just started. I traced down a road leading to Islington Bay Wharf, which I walked in about half an hour (instead of the 2 estimated hours). This was a fantastic little hike through volcanic fields ending at a rather scenic harbour, home to many little trails leading passed the bay. I continued until I reached the end of the island, where a scenic narrow isthmus formed the connection with another island, the final attachment made by a tiny little bridge. I had reached Motutapu Island.

Important information: There is NO drinkable water available on Rangitoto Island and there are no shops. Based on my experience I can confirm 1,5 litres is not even close to being enough, I had to recover two full days from dehydration. With this heat and humidity bring at least four litres if you stay the full day, preferably more. Not kidding. It’ll get less heavy during the day. 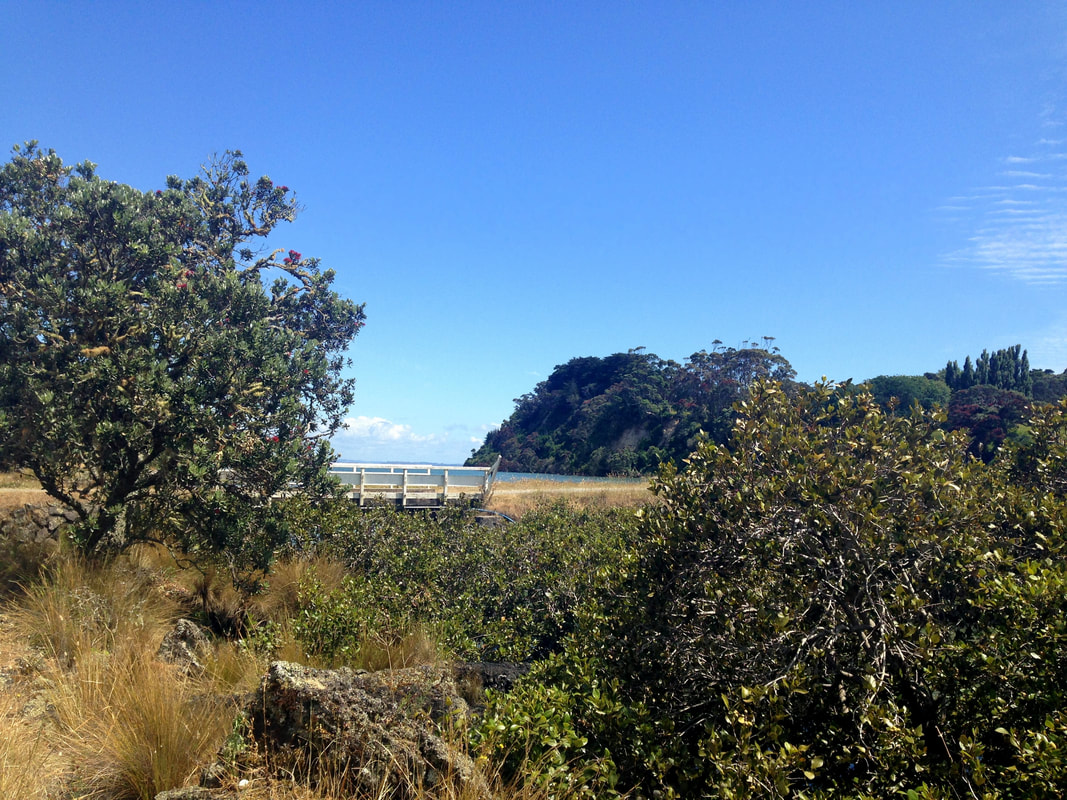 This island was occupied by Māori for over 100 years, until a volcanic eruption about 700 years ago destroyed all their settlements. The name comes from “Te Motutapu a Taikehu”, “the sacred island of Taikehu”, who was a tribal priest of the Tainui tribe. It’s interesting to witness the sudden landscape diversity from Rangitoto’s lush overgrown jungle to Motutapu’s low grass and wet meadows full of cows. 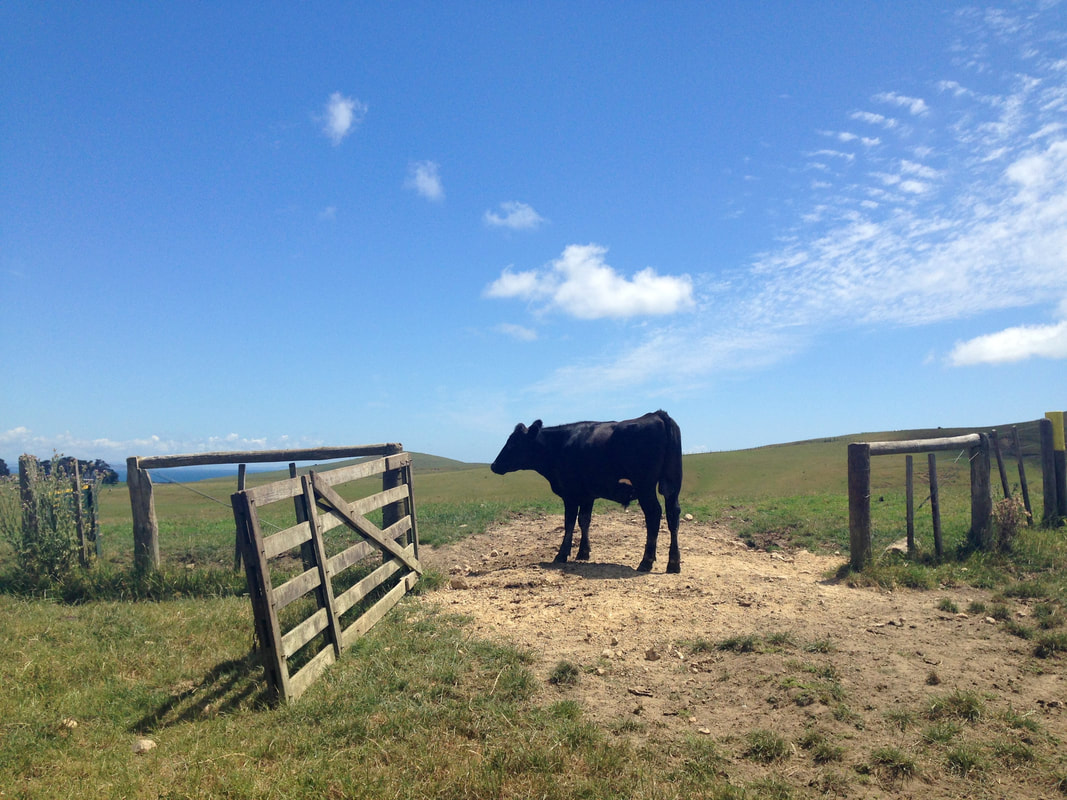 You truly have two different experiences here in one single day! I continued to the trail immediately on the right after the isthmus, which started off quite clearly but slowly disappeared in vegetation further down the road. At some point in time I was so lost I decided to turn around and hike back, until I ran into a cheerful Dutch couple I met on the boat. As a team we could make it, we assured ourselves. Let’s conclude it was a challenge, referring to several mise en scenes of us waist-deep in hibernation, trying to balance hesitant steps on the uneven soil full of invisible potholes covered by greenery. The way out was a long and challenging one, but therefore even more gratifying.
If you’re the camping-kind-of-guy, I highly recommend bringing your gear along and pitching your tent at the Motutapu campsite. It allows you to explore this compelling islet on a more thorough level. Category: “I wish I had known this beforehand."
Waiheke Island

Another interesting one on the list you’ve certainly heard about is the popular tourist-infiltrated Waiheke Island. Also for this one you have several interesting deals to turn this into a budget outing. Websites like Groupon and Grabone regularly come up with some highly discounted promotions and I’d like to make you aware of the Hotseats-deals from the Fullers ferry service, offering $10-a-seat-deals one-way if you book a bit in advance (at least a week). I decided to take the SeaLink ferry to Half Moon Bay on a cheaper student ticket (which I’m not, but they didn’t check at all) and return with the Fullers ferry service on the other side of the island at Matiatia with my Auckland Hop-card for transportation, which also gives a discounted fare.

I thought a while about my mode of transportation... For one I’m not going to board a fucking hop-on hop-off bus or join a tourist-tour. I like to see this island, but to lose all my pride over it is a bridge too far. Bringing a car to the island via the Sealink ferry is very pricey, and so is renting one on the island...

And to be honest, I’m here for the wine. Drunk driving is (very understandably) a punishable offence in New Zealand.

But... that doesn’t count for bikes right? At least, in my country it doesn’t (that’s why all main clubs and discotheques had a sea of bicycles in front of the entrance), and The Netherlands is kind of the Kingdom of Bikes, so we make the rules right? ... Right? Well, I can always turn to my old trusted technique of solely speaking my native language all of a sudden, which makes even the most hard-ass cop give up eventually. BUT, I had to obey one stupid rule: wearing a helmet. There are many ways to acquire a look of mild retardation, and this is certainly starring in the top-3. I basically cycled out of the uterus, so I don’t really see the necessity. Which is a tedious way of saying I do not have a helmet head. 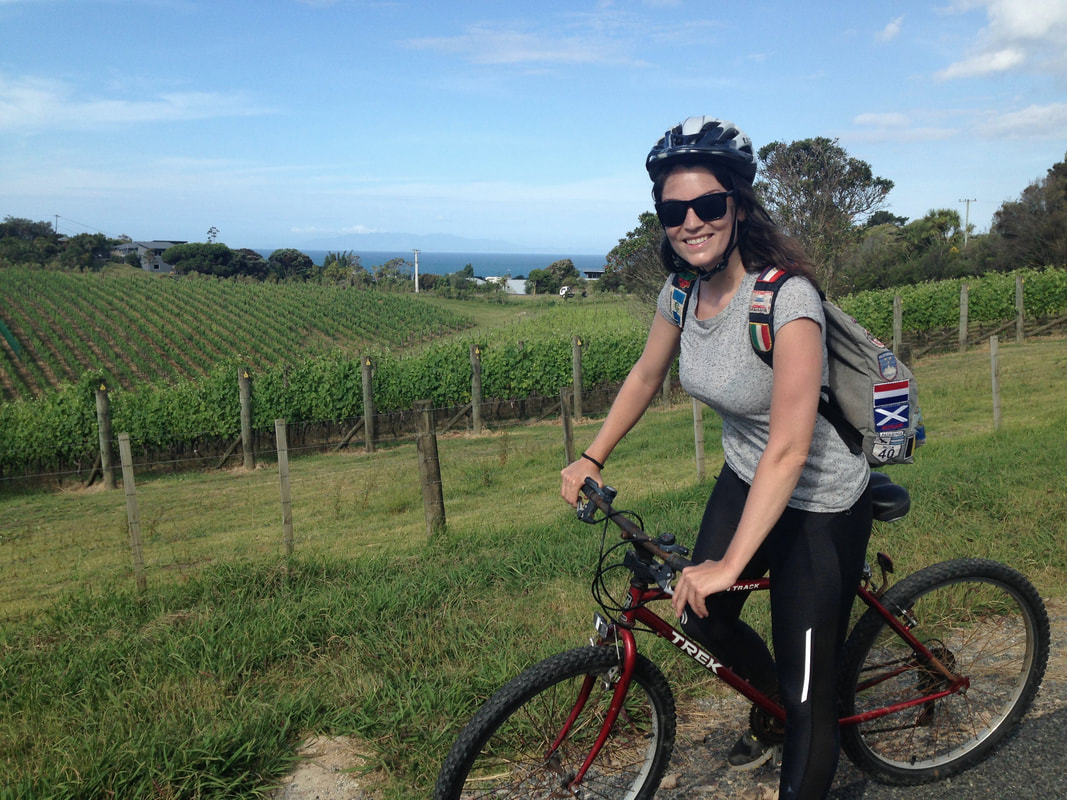 Better deal with that shit drunk. So we weren’t even cycling for 30 seconds or my travel buddy and I took a sharp right to the Kennedy Point winery, which won several prices for their splendid Syrah. Good, as I like me some cuppa red. A tasting cost $9 for which you get three small glasses based on your personal selection. I went for the Red Trumpet Blend, which was a bit sour, a highly appealing Cabernet and indeed, the obvious winner of ‘em all: the smooth and flavourful Syrah. Together with some appetizers and an atmospheric terrace overlooking Half Moon Bay, this place is a recommendable spot on the wine-trail. 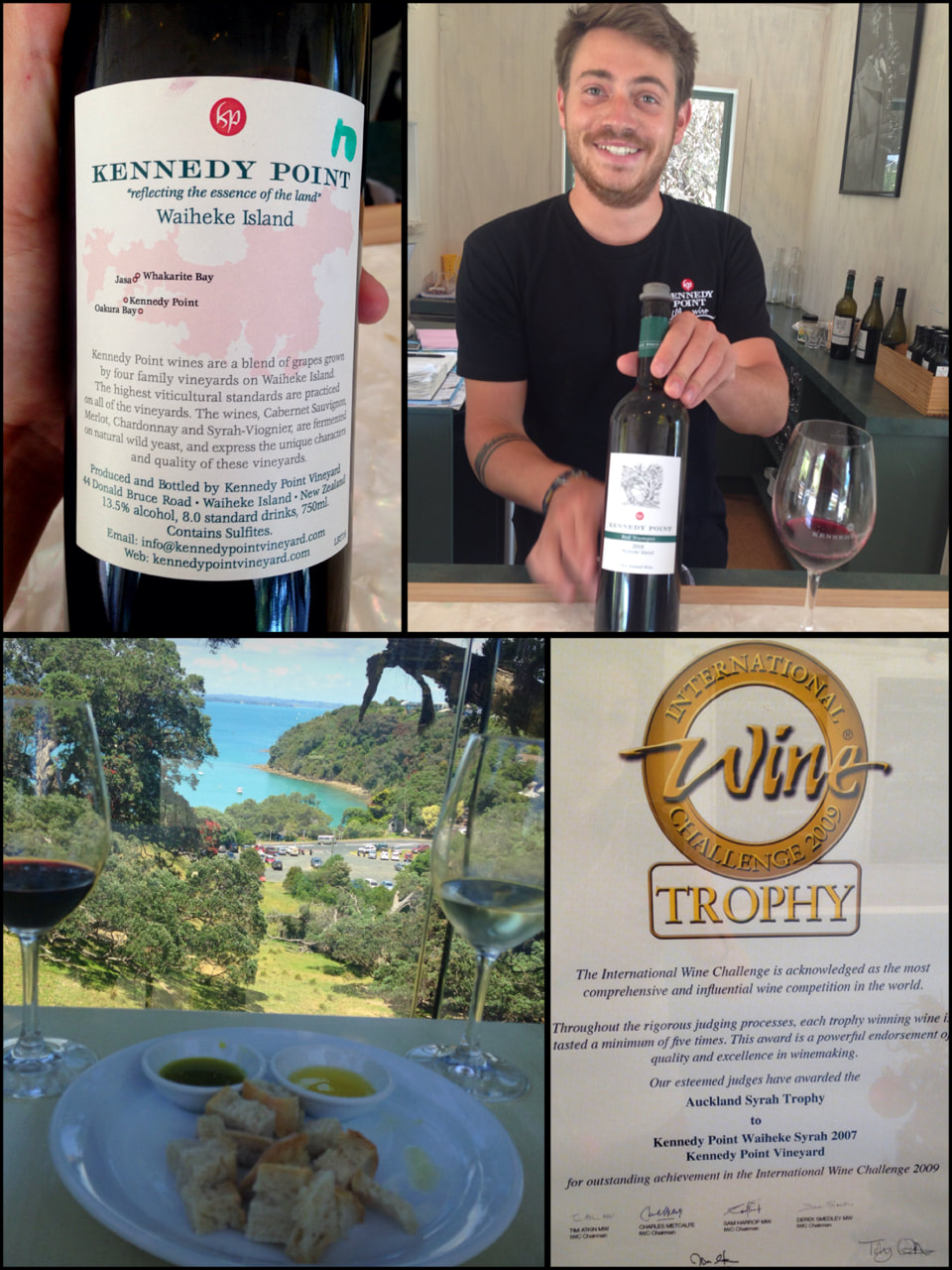 ​The next stop was at Wild In Waiheke, which wasn’t only a ‘winery’, but also some outdoor spot for archery and outdoor sports, infested with daytripping families. If that’s the target group, I wonder how good the wine really is... so we turned around and went to the fancy and popular Stony Ridge next door. It’s one of the more well-known brands widely distributed in NZ supermarkets... and therefore jam-packed with visitors. This results in a less welcoming vibe where you have to do the tasting inside standing at the bar, the chairs only reserved for those tourists willing to dig deep in those wallets. Not that I’m sensitive for those kinds of ‘regulations’. We downed the first Sauvignon Blanc and Syrah like shots and took the last tasty Malbec to the terrace to consume it with a view. An enchanting view, it has to be said.
​The alcohol kind of numbed the stinging ass-pain and made the steep climbs more bearable. I mean, it’s a great idea, getting around freely and cheaply on a bicycle, but don’t underestimate how hilly the landscape is here. Fit bikers’ legs are an absolute must. As is sunscreen (factor 50 – ozone layers and stuff) and a sufficient water supply (there’s a supermarket on the island though). However, it makes those little beach breaks extra rewarding... especially if you stop at the scenic Onetangi Beach where the water temperature seemed to be exactly spot on. 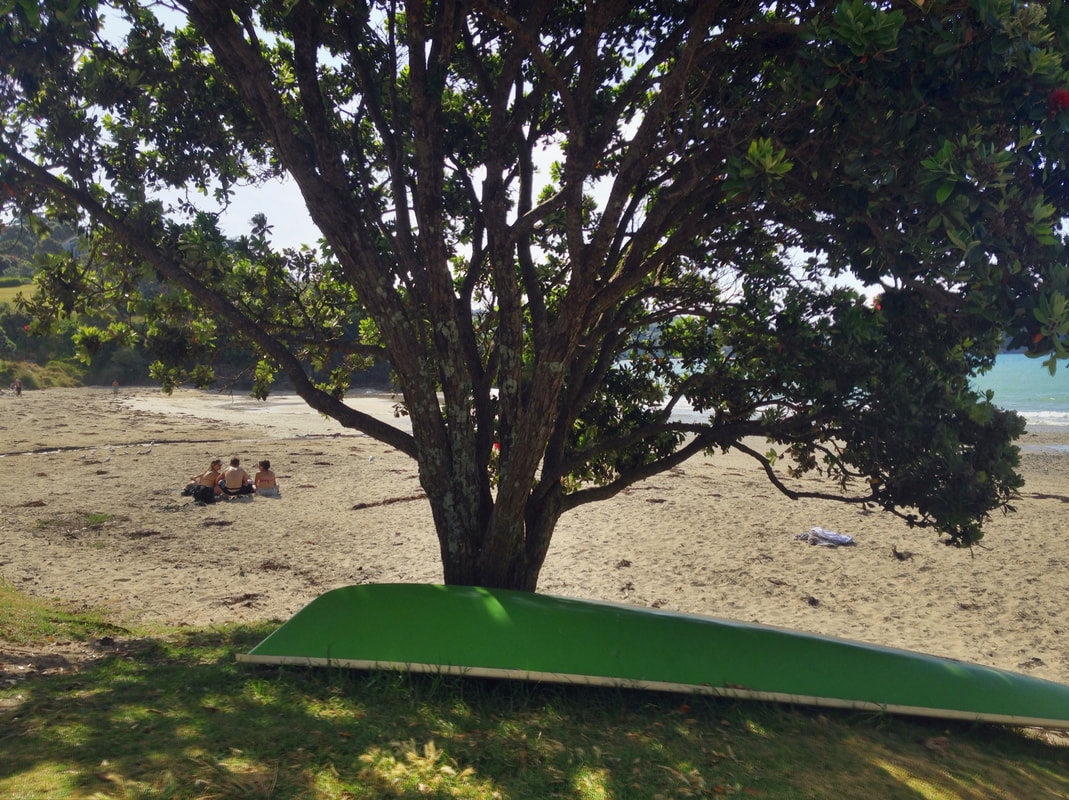