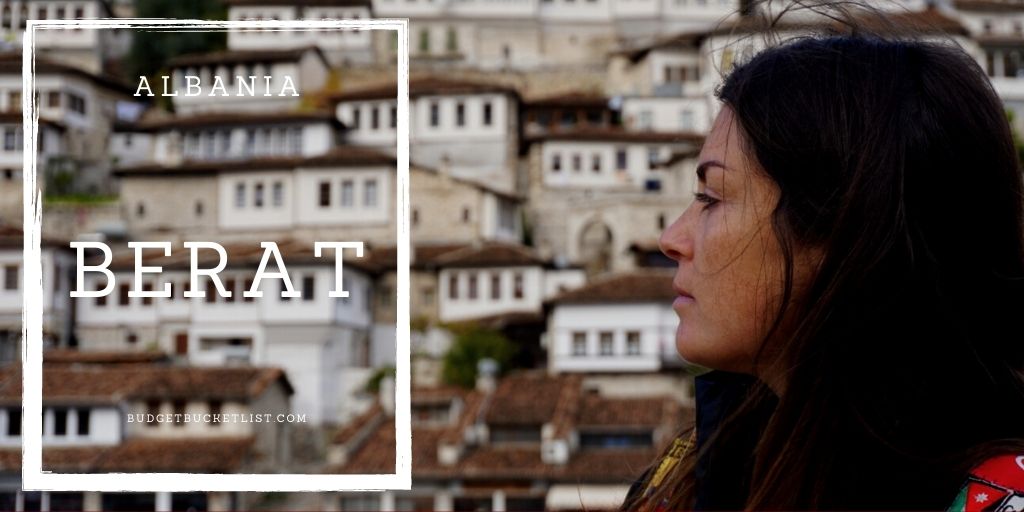 Not in the story-mood? Scroll down for the Quick Budget Fact Overview: an itemized information summary of Berat! ↓
I consider myself a UNESCO-World-Heritage-fetishist. As such, Berat was an unavoidable stop on my 1-month Albania itinerary. One simple glance at this “City of a Thousand Windows” makes it clear why the entire historical centre is included in this prestigious list. The unique architectural style and multi-layered influences dating back to a variety of timelines characterize this extraordinary town, whilst inviting for an extensive and thorough stroll. Even though former communist leader Enver Hoxha didn’t do Albania any favors, he didn’t fail to notice Berat’s exceptional charm and importance by proclaiming it Albania’s “Museum City.” Indeed, you should go.

The Kala, also referred to as the Citadel, Old Town or Castle Quarter, is possibly the most prominent area of Berat, proudly towering above the city… providing hands down the best views in town. The Berat Castle, which has an extensive Roman and Byzantine history*, is remarkably well-preserved and contains an interesting conglomeration of ancient architecture, nowadays protected as cultural monuments. It’s quite interesting that people actually still live inside of the city walls. As this fortress-population was predominately Christian, it doesn’t come as a surprise that the interiors of the fortified walls contained 20 churches opposed to only 1 mosque (the Red Mosque for the Ottoman garrison -  only the ruins are left). Entirely in theme, it also houses the Onufri Iconography Museum, in case religious icons excite you.
​
Fun Fact #1: The Berat Castle is depicted on the 1996 / 2000 / 2013 10-lek-coins. Fun Fact #2: You are charged an entry fee if you walk in from the main north-side entrance… but there are also three smaller unguarded entrances all around, where you can simply walk in for free (one is marked on Maps.me).

​
* To fully dive into this historical era, I recommend visiting the archaeological site of Dimal, down the banks of the Osumi River. This ancient city, which dates back to 200BC, played a vital role in the Illyrian-Roman War.
Too busy to read now? No problem, save it for later!
​Save on Get Pocket | Save in Browser Bookmarks| Save on Instapaper
Mangalem
​
The Kala area is tucked in between two historic neighbourhoods at the foot of the hill, sitting on opposite sides of the Osumi River and connected by the Gorica Bridge. On the northern side you’ll find the Mangalem area, which is traditionally Muslim. This section of the town could be considered the most distinctive of Berat, portrayed as one of its main images in travel guides and promotion materials alike. Expect to find traditional scenes of white stone houses bordering swirling alleys, the sun glimmering in early sunrise over the terracotta rooftops. Berat’s most significant mosques - the Sultan’s, Lead and Bachelor’s Mosque - are all situated within the Mangalem borders, as well as the Helveti Teqe. The what?! A “teqe / tekke” is a building complex where mystical religious rituals and teachings are performed in a secluded fashion, in order to eliminate external disturbances and allowing for internal growth and spiritual realization. The Helveti form an Islamic brotherhood of the Sufi order. The Helveti Teqe includes some delicate tilework as well as chambers with detailed carved wooden ceilings. There’s a second Teqe (Rüfai) in the Castle Quarter.

On the border of the Mangalem, on the way up to the castle, you can halt for a quick stop at the Ethnographic Museum. I’d say it’s optional. Sure, it provides a rapid insight in Albanian customs and traditional practices… but if you have already visited one of the many ethnographic museums elsewhere in the country, it adds very little to it, especially for the rather steep entry price they charge.
Gorica
​
From the Mangalem quarter you can easily cross the river to the Gorica-side of town, which has a similar appearance, but unfortunately less sunlight. This neighbourhood is entirely Christian, and as such includes sights like the St. Spiridon Basilica and Church of St. Thomas. It must be mentioned that Berat is one of the many cities in Albania where, surprisingly enough, Islam and Christianity have been coexisting in a more or less peaceful manner. The Gorica area underwent a thorough reconstruction after it was almost wiped off the face of the Earth by a severe earthquake in 1851. Since then, the lower area is defined by freely placed buildings, whereas the dwellings get tucked closer to one another the more you ascend up the hill.

Quick note on the bridge: According to legend, the foundations contain the remains of a young woman… who was buried alive inside to appease whatever cruel god supposedly ensured the construction’s strength over the centuries. That didn’t work though: It was knocked down numerous times by floods of the Osumi River, and subsequently severely damaged by explosions during WWI.


New Town
​
At last, you can obtain an entirely distinct experience by visiting the contemporary New Town, covering the recently built stretches as Berat further expanded (the town is surprisingly large and spread out)! If you’re keen on plunging into the local nightlife scene, you’ll find your kick on and around the vibrant Bulevardi Republika. 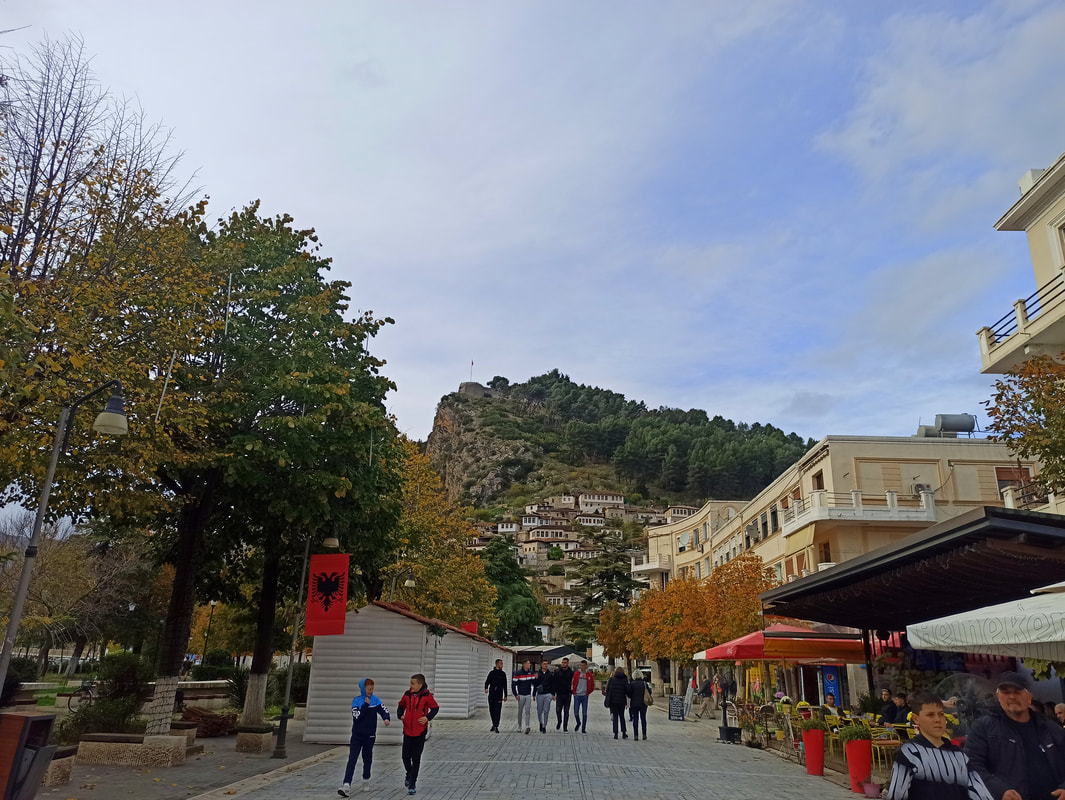 Discovering Berat will demand at least 2 days of your travel time… but why stop there? If you truly planned your trip well, you made sure to rent a car to uncover the more hidden secrets of Albania. There are plenty of interesting sights scattered around Berat that are extremely complicated to visit by means of public transport. Personally, I strongly recommend hiring a vehicle at Rental Car Shokdra, with whom I have an excellent experience. They provided me with a reliable car, as well as readily available customer service matching the overall high level of friendliness and hospitality the Albanians are famous for. 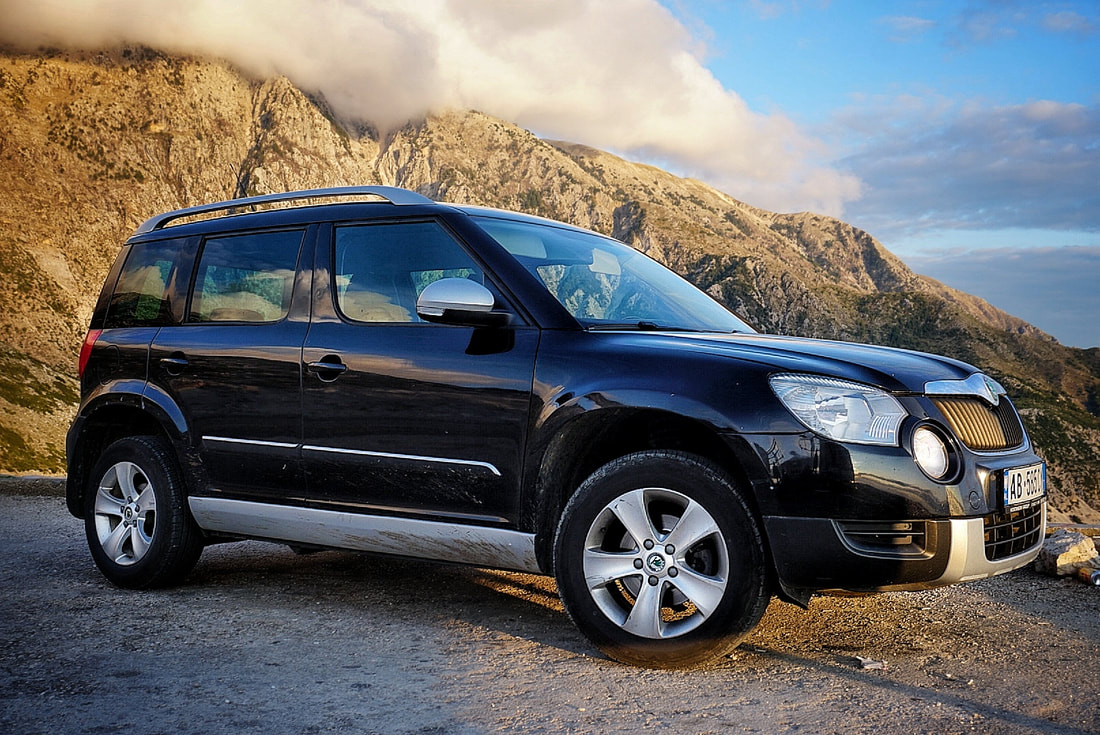 Opening photo & Car Shoot by Miles Watson Photography.
​
Tomorr National Park
​
The #1 suggested daytrip is definitely the one towards Mount Tomorr. More than just another mountain to hike on, Tomorr has a strong symbolical and mythological meaning in Albanian folklore as well as in the Pagan, Christian and Islamic religions. Thousands of pilgrims flock around the mighty, rugged peak each year, ready to take on the strenuous hike up to the 2416m elevation. With its positioning in the centre of a flat plain, granting undisturbed views in all directions, ascending Mount Tomorr indeed provides for a true “Holy-Shit!-experience.” Be ready for a hike through dense deciduous and coniferous forests, along the habitats of endangered bears, wolves and birds of prey. Apparently, the area is also well-known for its frequent storms… which I experienced first-hand: During my visit I was tormented by a horizontal hailstorm slapping me right in the face and blocking all views… A real party-pooper for any hiking plans!

The logistics: It’s a good 1,5hr-drive from Berat, following the staggering Osumi Canyon (which continues until Çorovodë). When I visited, a comfy asphalt road was just finished, starting just before the village of Poliçan. I recommend backtracking on this road upon your return, as when you continue you’ll eventually end up on a very rough dirt road which isn’t too great to drive on. I'm talking out of experience, as we had to turn around.

Trails can be found here. 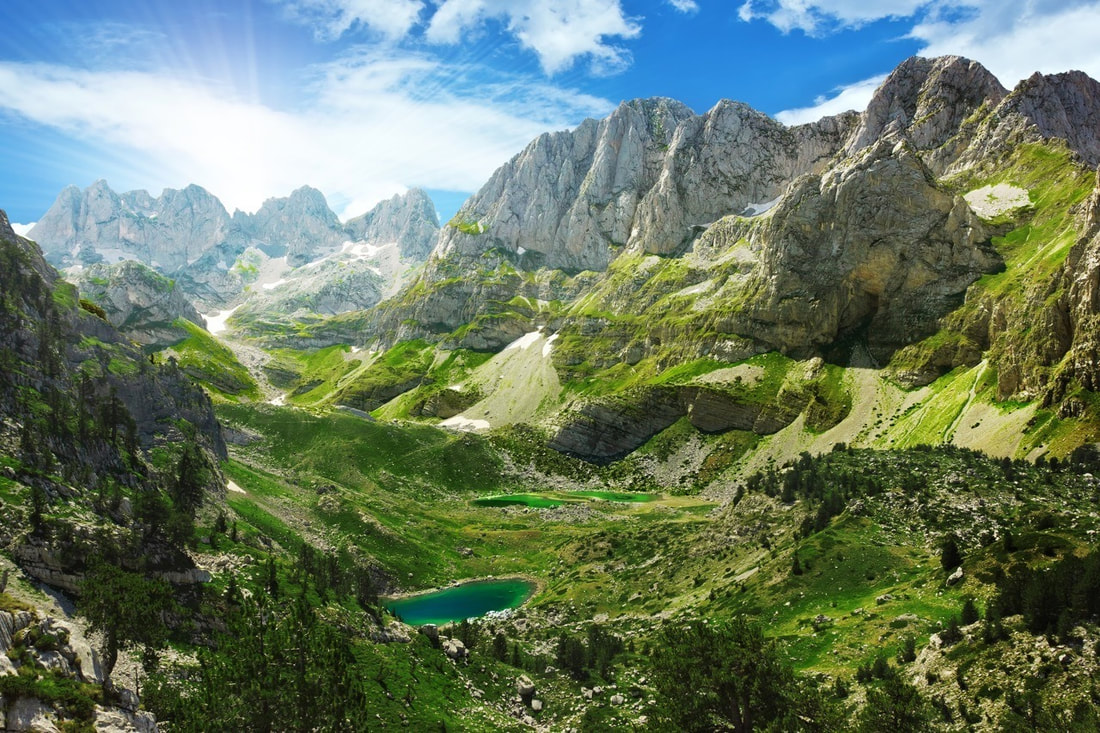 If you have more luck than me... this is what it could look like. Photo credits: Chasing the Donkey.


While on this Tomorr-roadtrip, you can return to Poliçan and potentially continue to the Bogovë Waterfall.

The downside of visiting wineries is that they’re generally outside of the city center, and as such require a vehicle... which is a liability after some unavoidable drinking. The upside is that, well… they serve wine! In case you were able to arrange a designated driver, or are willing to get a cab/hitchhike, there are two main wineries at your disposal: Cabo and Nurellari.

[Whatever you do, avoid Kantina Luani – it’s merely a pub at a gas station, not a wine bar as we were led to believe]

Another intriguing stop is Apollonia, the archaeological remains of an ancient Greek trade colony which was founded by colonists from Corinth around 600 BC (upon invitation by the Illyrians). Over time, Apollonia gradually gained political independence from Corinth and was eventually organized as a city operating under an oligarchic system. When the Romans took over, the town turned into a crucial military staging ground, as well as a cultural center gaining fame for its prestigious school of philosophy… one of its students being Augustus, the fist Roman Emperor. The relevance of Apollonia began to decline in the 3d Century AD, when its harbor silted up due to an earthquake… and it was eventually fully abandoned in the 4th Century AD.

It's good to know that the site is very widespread, demanding a full hiking day for a complete exploration. The part that requires a 600 lek entry fee (discounts only available for Albanian citizens), is only 5% of entire Apollonia. This area does contain the most dense collection of archaeological restored remains, incl. a small museum. You don’t have to pay for this if you don’t want to… you can also simply drive to the village of Pojan, and walk up the hill from the other side, which isn't gated. With my background of 6 years studying Greek and Roman civilization I quite enjoyed this daytrip, but I must add that I didn’t think the restorations were done in a very pleasing manner: The missing parts were simply filled up with red bricks and cement, completely out of line with the original colors and materials and as such, failing to recreate the foregone appearance. The information signs are written in such flawed English that it is impossible to follow any storyline or explanation, and the provided location-maps are actually mirrored, which is thoroughly confusing. In short: It’s an interesting spot, with lots of room for improvement.
​
Another part of the site, not mentioned anywhere on-site or online, is an obsolete communist Cold War Tunnel forming a gigantic underground labyrinth. I randomly stumbled upon it and couldn’t believe my eyes! If you want to have a gander, just search for the hill on the left side from the main entrance… It’s actually that entire hill which forms the tunnel complex, not giving anything away from the outside. From the hilltop also stare at the opposite mountain range. The observing eye can trace down some openings, which were in fact the ammunition storages, even hiding tanks. What an awesome find!
Quick Budget Fact Overview 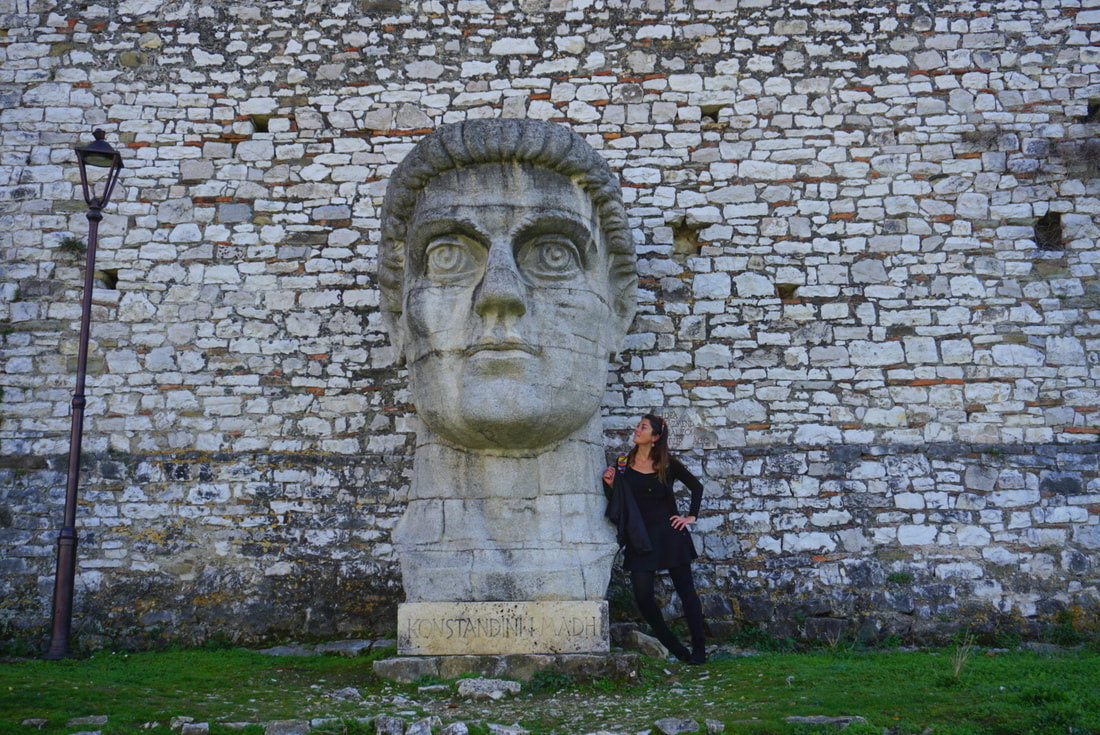 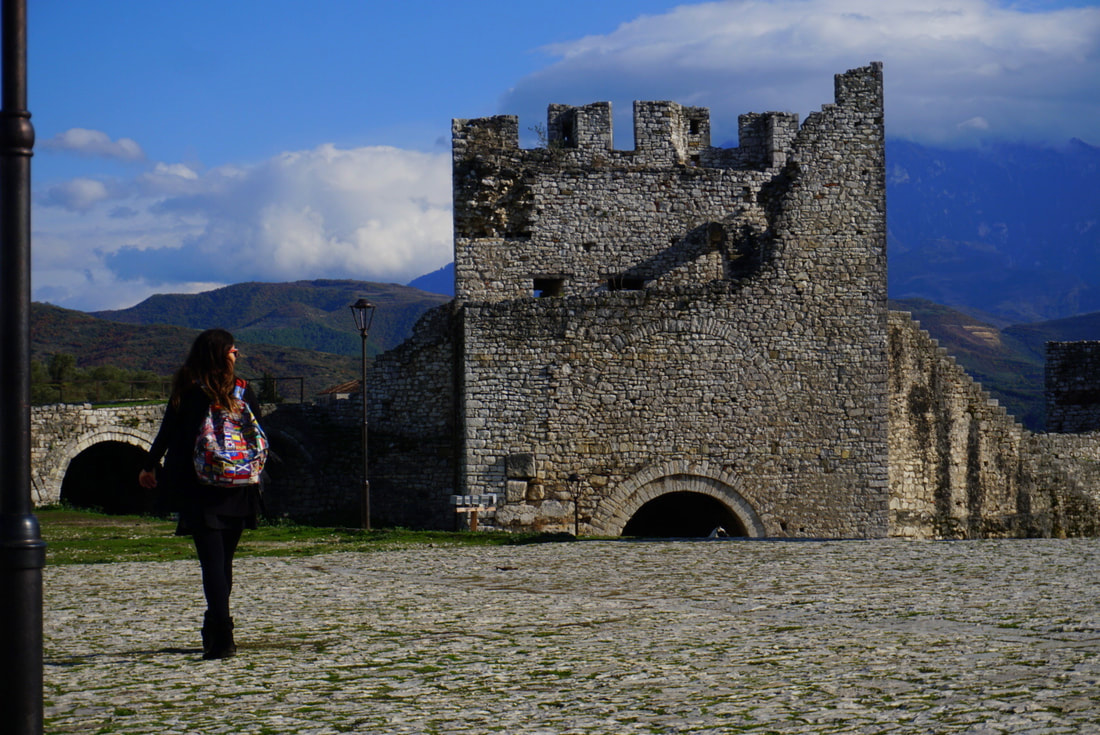 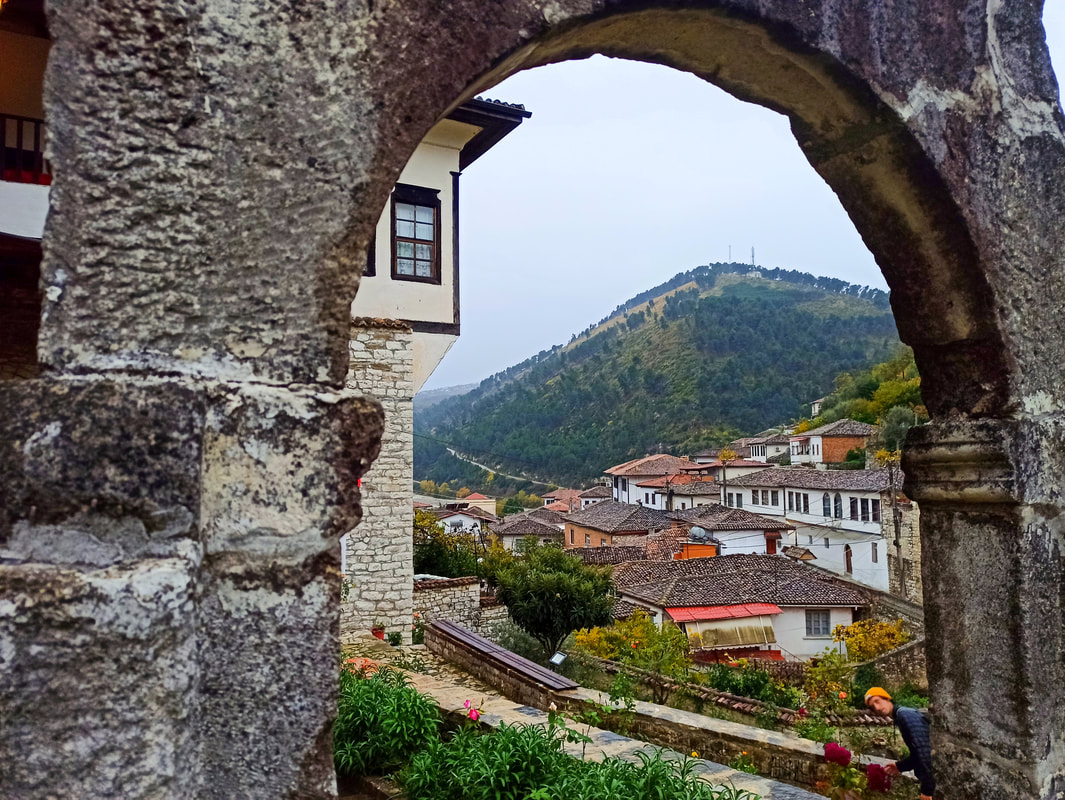 Next?
​​
In order to support the travelers’ community, I spend many hours per week to adequately document all information and advices for prospective visitors, accompanied by a (hopefully) entertaining insight into my personal observations and experiences. This service is and will remain free. However, if you voluntarily want to make a contribution and support my travels and thus the creation of new stories and information supply, here is the button you’re looking for:
Donate
Related:
​- Get your Albania itinerary ready: Berat, Gjirokastër, Korcë / Ohrid Lake, Theth, Shkodër, Tirana, Mount Korab & the coast!
​​- Check out Budget Bucket List's FAVORITE HIKING DESTINATIONS worldwide!
- Visit Balkan's finest: Montenegro's National Parks Blog, Kotor Bay & Lovcen NP and Cetinje, Podgorica, Prokletije NP and Montenegro's Coastal Towns Blog
- 10 typical Dutch celebrations no traveller should miss out on
​​- History preserved: Time capsule of Romanian culture Maramures
- Be about Bulgaria: Check off Bansko, Belogradchik, Plovdiv, Sofia and of course Veliko Tarnovo!
- Where modern meets classic: Vilnius, Lithuania
​- 8 ways to save money in Vienna, Austria
​​- German gems: Aachen & Frankfurt am Main
​- Europe's best skiing & hiking: Get your ass over to jaw-dropping Switzerland!
​- Budget Bucket List hitchhike trip to... Kosovo!
- Unravel the mysteries of Serbia
​​- Discover the splendours of Turkey: Istanbul on a Budget & Reasons to visit Edirne