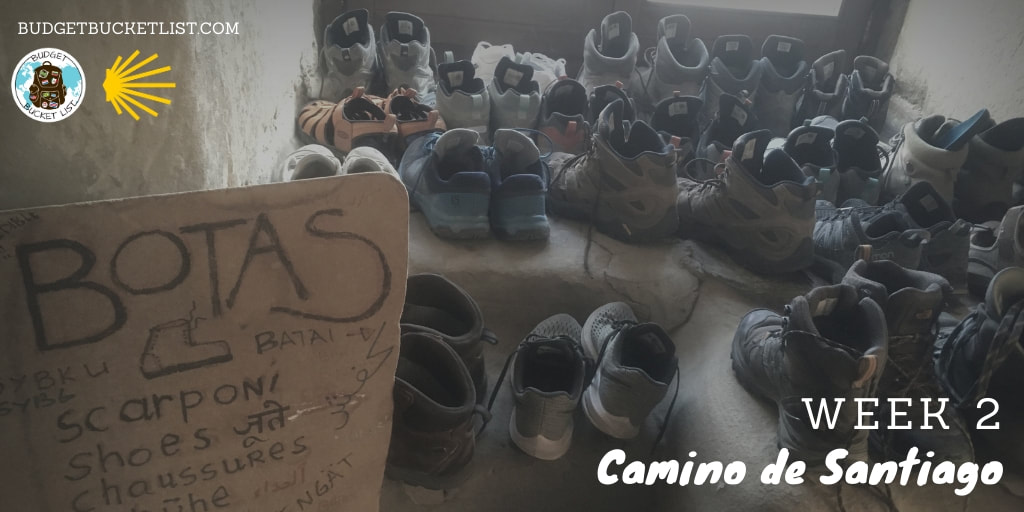 Where the first week had an overall “oh-my-god-I’m-on-the-Camino-vibe”, the second one exchanged hysterical excitement with a more neutral acceptance that this is my life now. Yeah, I’m a pilgrim, so what? I live on the damn Camino, bitches! My body kind of overcame the shock of the daily flogging I personally keep on subjecting it to, my pack became one with my body. The legs stopped hurting as much as they did in the first week, my blisters slowly grew into permanent protection layers of rough callus.

I noticed I came closer to myself, my body and my capabilities. Fun and merriment got occasionally alternated with reflection and problem-solving. I started seeing how the Camino is a mini-version of how I live my life. Intense, fast, passionate, merciless, hedonistic and entirely independent. Full of fire. Traits I consciously developed and admire in myself, but also leading to the same old pitfalls and disruptions in balance. This Camino started to feel like somebody took my entire life story and crammed it into a dramatic yet compact theatre piece, acted out entirely by me, while I simultaneously watched it all unfolding itself as an audience. Bizarre, but insightful.
​
​
Not really feeling like reading this time? Video Diary Week 2:
Save this article for later!
​Save on Get Pocket | Save in Browser Bookmarks| Save on Instapaper
7: Torres del Rio – Logroño

The last Camino report ended in Torres del Rio, an appealing little municipality crawling up a hill in the western corner of the Navarra region. I had Couchsurfed with the rather unusual character Josu, swiftly followed up by yet another host awaiting my arrival in the substantial city of Logroño, marking my entry into La Rioja territory. After traversing long stretches of countryside, it always comes as a reversed culture shock to suddenly enter the land of the masses. Cars! Buildings! Exhaust fumes! Why do people build this shit – the hippie-side of me generally wonders after days in nature – What purpose does it serve if you can also live among the trees and flowers? I loosened my frown slightly after entering the medieval bridge stretching out into the rather charming historical city centre… right, if there’s one thing that those (colonial) Spanish folks can pull off pretty damn well, then it’s putting together attractive urban environments. Be it in Latin America, or on their own soil.
Even though I made an oath to myself to not get involved with so-called ‘Camino Families’ (groups of solo hikers glued together as inseparable unities), I today walked alongside one. An ensemble of rather pleasant individuals, I must add. Ones that like their wine, too, just to mention one pretty obvious shared passion. In short: I was entertained. But before stuff could get too hazy, I pulled out and hurried to Eduardo’s house. Eduardo? Yes, of course, Eduardo: Logroño’s most kickass Couchsurfing host, offering me a super soft bed (in a private room!), shower, laundry service and even a mouth-watering dinner and breakfast. Yes, the world is that kind, turn off your TV and come out to experience it for yourself!

Night spent in: Couchsurfing
* For those who don’t know what Couchsurfing is: It’s a digital network where travellers from every corner of the world meet and stay at each other’s houses, entirely cost-free. You can take on the roll of host or guest (surfer) and either request to stay or host, selecting a profile of your preference with a healthy amount of positive references. The focus lies on a cultural exchange, and participants are generally encouraged to spend time together, exchange stories, food and experiences.

The great care of Eduardo aside, I woke up rather mashed. My prior wine drinking affair was promptly washed away by an intense cloudburst (my first rain on the Camino!), and needless to say my rain gear and thermals were situated elsewhere, so I got soaked to the bone in suddenly rather hostile evening temperatures. Result: I had overnight turned into this fairly unattractive creature with leaking eyes, a continuous stream of snot dripping out of my nose and a voice like I’ve been chain-smoking crack for the past 5 decades. Right, so what do you do then? Pump 30km out of those legs anyway, like nothing happened. Might as well. Weak in the body doesn’t mean weak in the mind.
​
Admitted, the struggle was real. I’m still surprised I actually pulled it off. This physical all-time low promptly turned the focus inwards, triggering inner reflection and mental processing of recent trauma. Upon completion, however, every step was 1 too many – I was done. So quite thankfully I could fully submerge myself in an oasis of luxury and relaxation as a reward afterwards… Ha, no, of course not: 90 fucking beds in 1 single room, a new record. The Camino has no mercy.

It’s incredible what the body is capable of. It surprises me every single morning on the Camino how a night of sleep can fix you right up. Steph 2.0, ready for action! I kinda hooked onto Lennart (or he to me), who for the upcoming week would take on the role as my permanent hiking buddy (hold up – is a 1-man-camino-family a thing? No, I didn’t think so either, pfhew!). This fresh young German chap, who acquired exciting trail names such as “l’homme sauvage” and “feather man” due to his shaman-like plume-embellished walking cane and persistent passion for wild-camping along Santiago’s trails, has already been hiking for 2,5 months. He once kicked off in Germany, but one crushed relationship later he continued solo from Cluny going all the way down to Finistère, a stretch of almost 2000km in total. I noticed I can only form durable friendships with people who I somehow admire, who demand my respect one way or the other… it goes without saying that a guy engaging in such endeavours at the age of only 25 has my utmost appreciation. Behind the pretty baby-face of this fluttering butterfly, hedonistically following everything fun and pretty grabbing his instant short-term attention, and his sometimes boyish greenness of observation and interpretation, goes a better understanding of the concept of life than most of us twice or thrice his age. 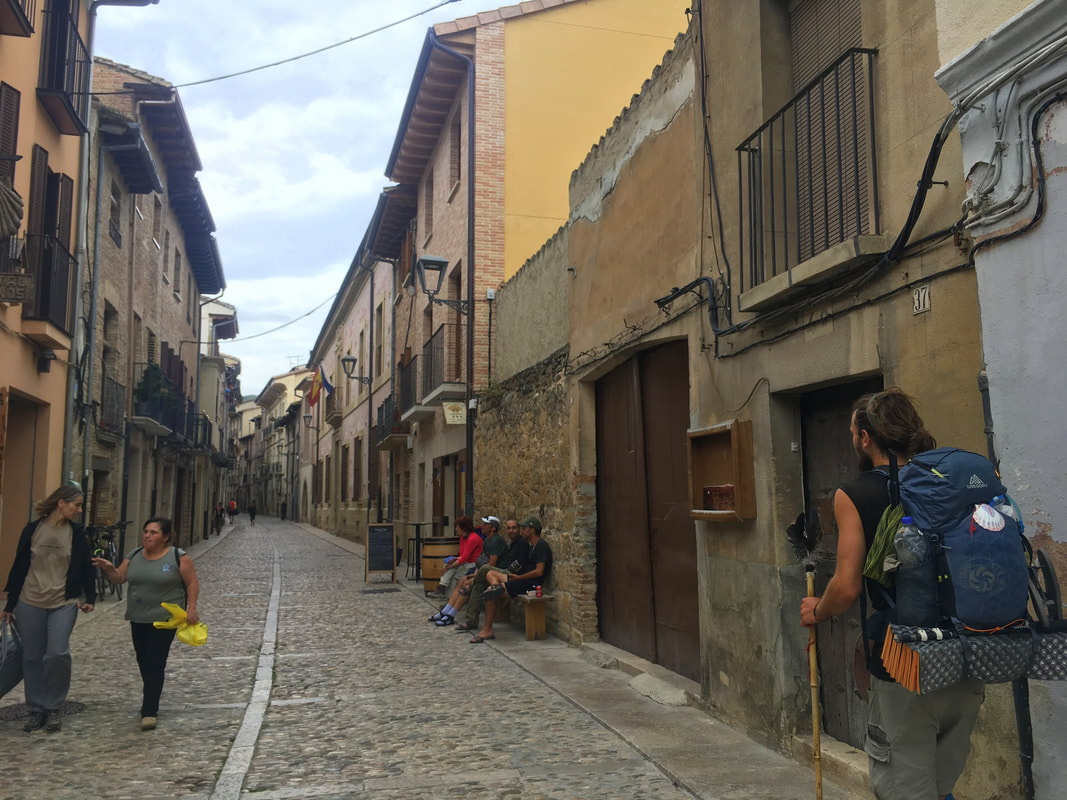 ​The downright mindboggling landscapes blurred the notion of time, and before we knew it we had reached the tiny, amiable township of Grañon… where we spent the night in a church. Oppan Pilgrim Style, right in your face! Where I’m used to churches only taking money, be it via our tax payments, church entry prices or forced donations, for now they give back for once, which is refreshing. What I liked even more is that a communal dinner is served based on voluntary donations of yesterday’s pilgrims, a favour passed on to today’s receiving end. Looking out for one another!

This donativo-based concept carried on another night to follow (3 in a row now)… a conscious choice, as I’m in fact planning my hikes around them. Besides the opportunity to pay whatever the hell you feel like (without being unreasonable), I simply find the volunteers operating such donation-based shelters 100% friendlier and more sincere than the albergues with a profit motive. You feel the love and dedication, purely coming forth out of devotion for the trail, its objective and its people. Us.
​
After an extremely boring and monotonous stretch of Camino right along the highway (why, Spain, WHY?!), this lodge really went the extra mile (to stick with hiking lingo). During the evening gathering we were presented with notes of pilgrims of our own nationality, who passed along this very place about 3 weeks ago… and as such, were bound to arrive in Santiago any moment now. They had scribbled down their concerns, reflections, hopes and/or observations, which were to be read out loud for the first time now, by us… triggering smiles, nods and occasionally truthful tears. Afterwards they were thrown into the licking flames of a fire. Burn it all and rise from the ashes. Indeed, hallelujah to that!

While I was far from impressed with the Camino on the previous stretch, today offered a welcome change. I will never ever understand why the Spanish government deemed it a splendid idea to build a modern, loud, polluting highway right next to Europe’s most famous century-old hiking trail. A trail literally accounting for the lion share of the entire local economy due to worldwide tourist masses flocking together right here for this sole reason only… but at least they now offer ‘scenic alternative routes’, highlighted in every single guidebook. Basically, the ‘Real Camino’ got fucked up so badly at times, a ‘fake’ (way better) Camino had to be brought into existence. Not all businesses are too pleased with this development, however, and an actual ‘sign war’ is in place to remove the signage towards the B-route leading hikers around their bars/supermarkets/hotels. There’s 1 true God on the Camino (/the world), and that’s profit. Amen.

At last, a break! I got so sucked up in the brutal rhythm of the homme sauvage I almost forgot I intended to play travel blogger along the Camino, stopping frequently to go for a gander and poop out some stories. Not that that’s what I was going to do in Burgos (it was Netflix-‘o-clock), in fact… I didn’t even really like the place. With some places you just ‘click’ – in fact, I do so with an overwhelming bunch of them, to such a degree that I'm full-time traveling for over 5 years now, scared to miss out on places I might also​ like… but Burgos, na-ah, not my vibe, hard to put my finger on it. The universe agreed, making sure that every single piece of private accommodation was either booked or price-wise infeasible… which left us stranded at yet another freaking religious albergue with yet another freaking NIGHT CLOCK at 10PM. What is this logic, if you’re a believer you need more hours of sleep or something? Is praying that exhausting, really? I find it a rather patronizing attitude towards a collective of full-grown adults. There goes our Saturday night… *looks up at the sky*: “Go on then, say something, this can’t be what you meant with ‘eat, drink and be merry’?!”

The transfer to a private hotel room the upcoming day was a downright relief. Boots off, legs up, no 50 people coughing, farting and rustling plastic bags right next to your face... boy! How much I needed that! But Burgos simply wouldn’t let me have it: An unwelcome revelation was yet to be puked out all over me right before departure, ending the week less than desirable... 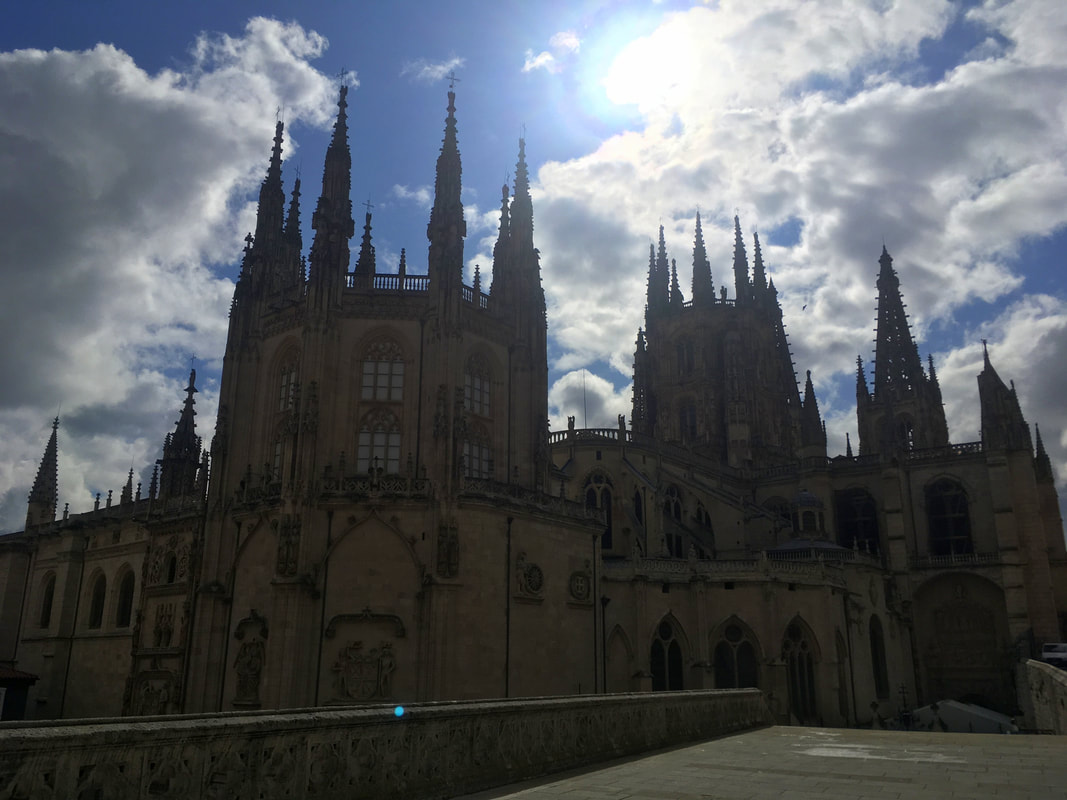