Download File
An edited version of this post can be found on STEEMIT: Upvote me to support my travels for free!
​ 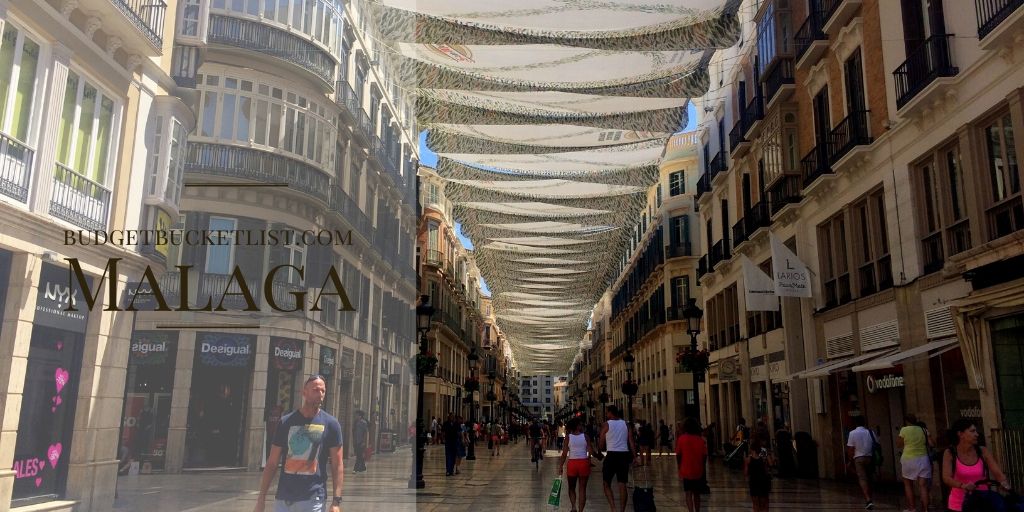 Honestly, I didn’t expect much.

Malaga just happened to be close to the Ryanair-airport offering some seriously attractively-priced flights, but the remaining power of attraction can be summed up as an absolute 0,0. I just expected some trashy beach place, crime scene of a scandalous Dutch-English invasion of slightly overweight adventure-avoiding rednecks skimming the sweltering Costa del Sol in their search of a sunny alcohol-drenched comfort zone. 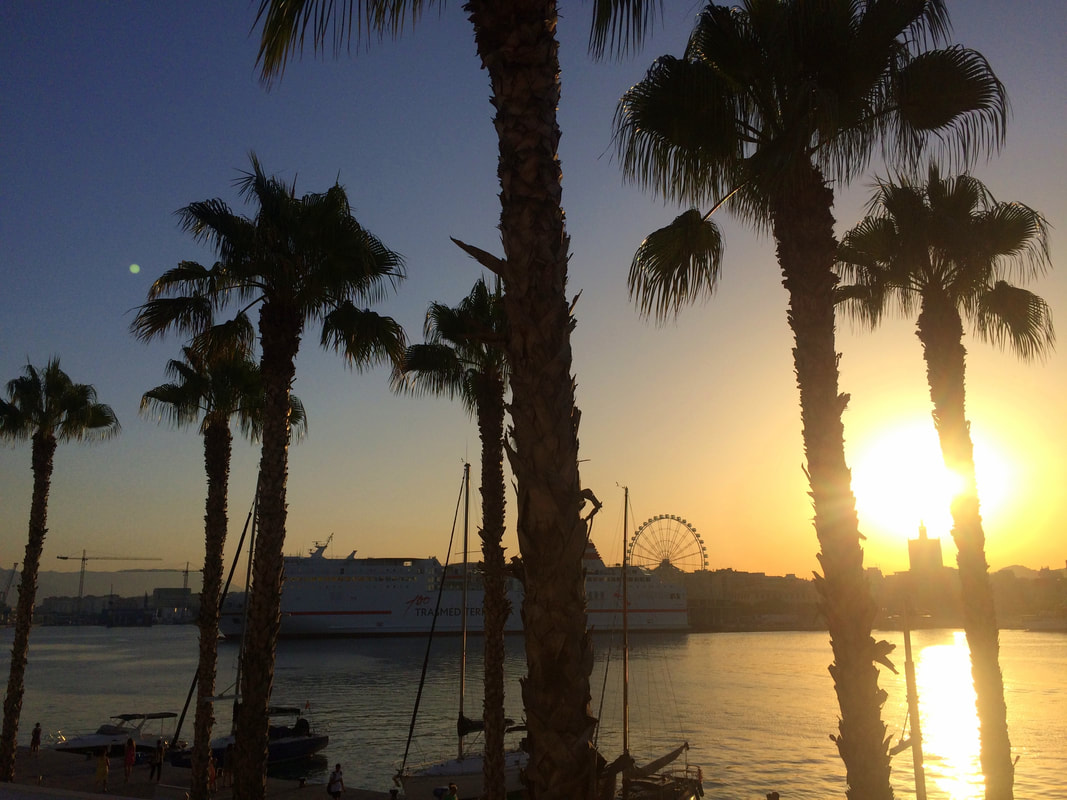 I found exactly that. BUT out of sight of the sunbathing masses there was a bit more to it… a hidden wealth of greenery and culture that is right there in front of you if you only bother to come out of your beach chair and look for it. I didn’t even get in the beach chair to begin with. I have only so little days in my life and so many places to explore, why waste my time sweating away at a polluted shore breeding a fine dose of cancer while watching a bunch of people I don’t even slightly associate with slowly turn orange? My Argentinean-Spanish Couchsurf-host Erick utterly agreed and before I could even open my mouth to pitch a plan, he had already run out to reappear in a cloud of dust on his roaring motorbike. He tossed me a helmet and tilted his head backwards, “jump on, te muestro mis lugares favoritos en Malaga, you’ll understand why I moved here and never left.” 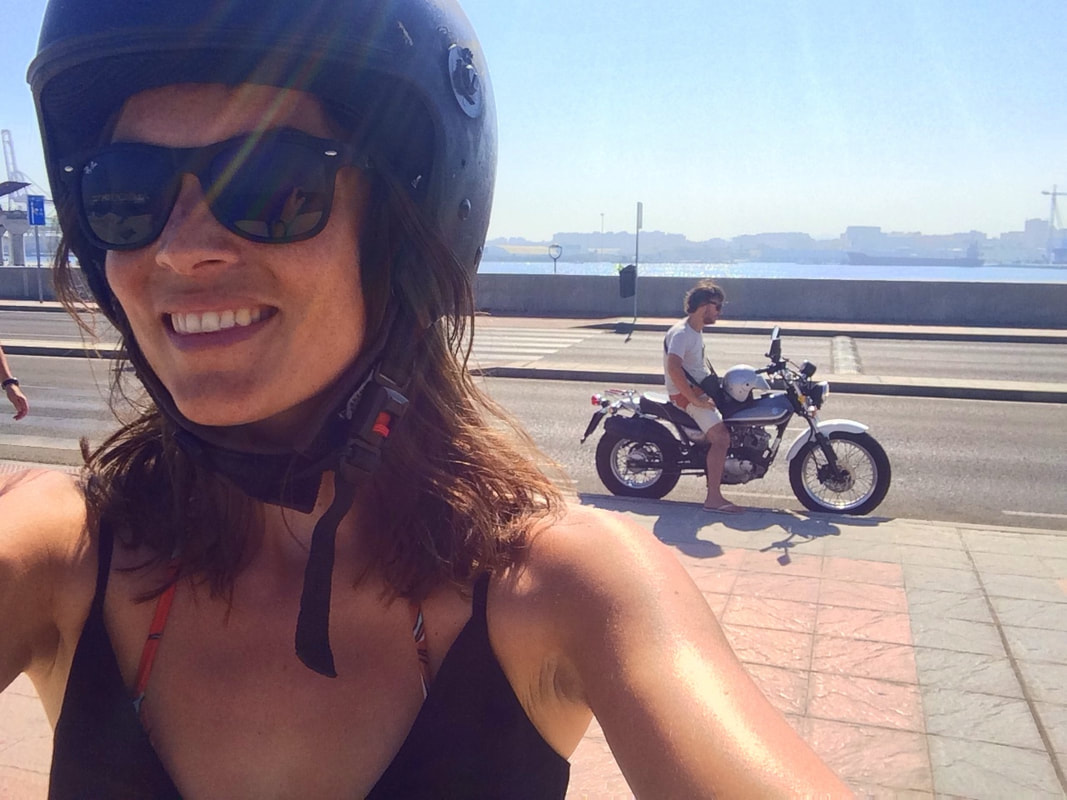 I grabbed on tight to the backseat and surrendered to the mind-boggling speed Erick felt was necessary, trying to leave my fears behind and only take adrenaline along. With the sights of the white coastline behind us we drove land-inwards, climbing up the whirling mountain passages curling through an impressive stretch of rich vegetation.
​
This is also Malaga, who would have thought. 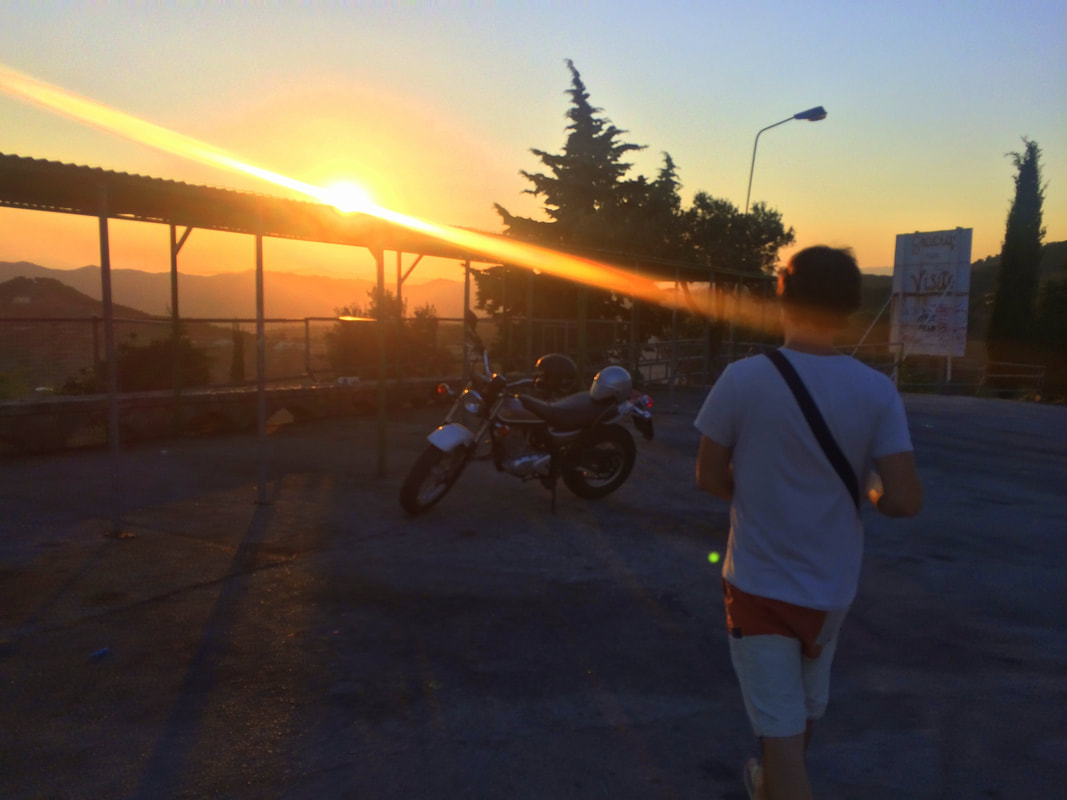 When the motorcycle slowed down and the speed-induced wind made place for the stinging heat southern Spain is known for, the true intensity of the landscape suddenly hit in. The abrupt silence without the deafening motor cleared my mind, and while the wind played with my hair I listened to the distant wail of the gleaming ocean. Besides some squeezed cigarette buds and a heart drawn in the dust there were no signs of human presence here… just us and the dry forest surrounding us, giving away some astounding views. “Espectacular, verdad?” his voice suddenly broke the silence. I nodded and tried to lick my dry lips, cracked by the sun, but my mouth was full of smut. “You look thirsty. Well, in that case I know exactly what you need.” 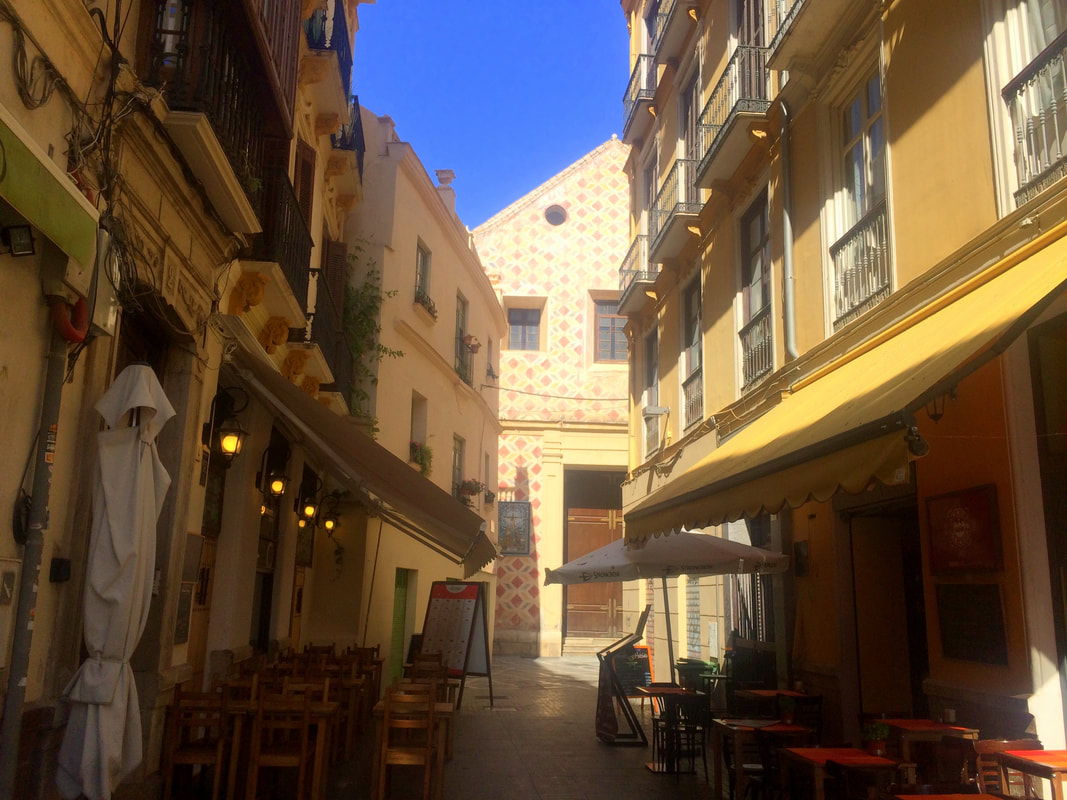 We quickly returned to exchange his motorbike for a car and before I knew it I was racing 70 km eastwards towards a tiny beach hamlet called La Herradura. Erick is a full-time professional musician playing in no less than five bands and high tourist-season means gigs every single night. From jazz to soul to funk, you can’t blame the man for a lack of variety. This evening it was time for his seventies-cover-band however, his high-pitched voice moaning the familiar sounds of the Beegees and Lynard Skynard through the snug patio of the Colchera Bar, decorated with lanterns hanging off weeping willow trees and candles dripping over the vintage wine bottles holding them. ​ 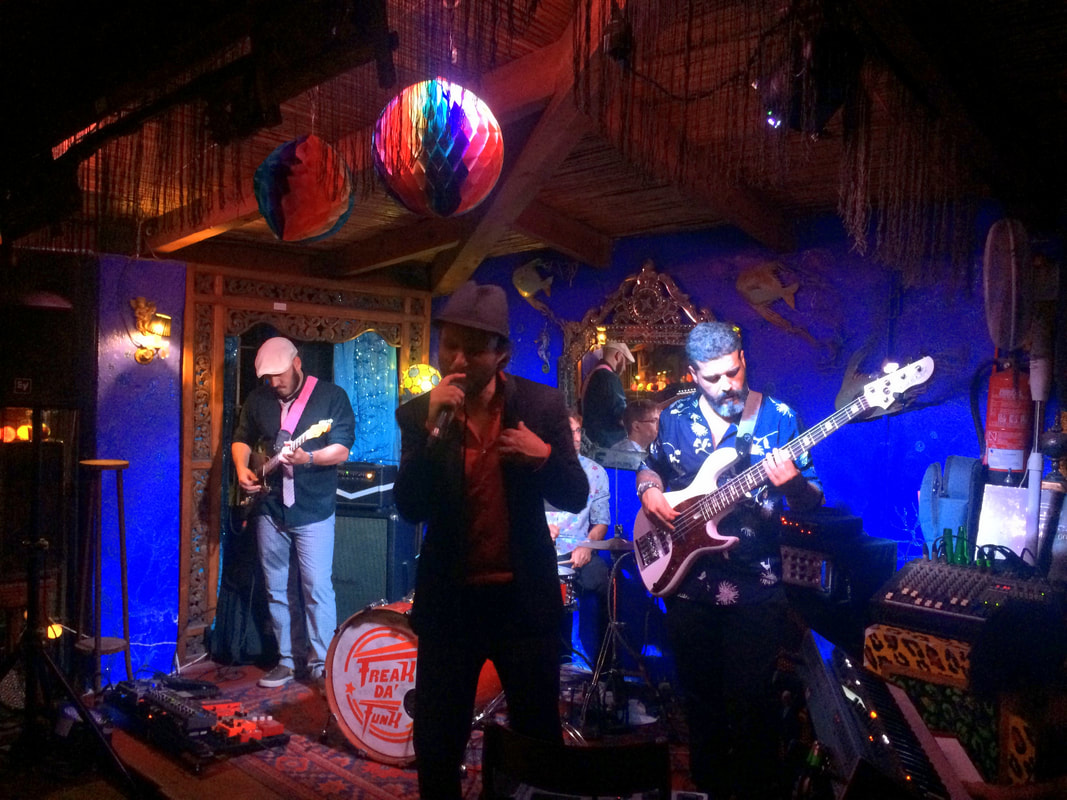 The late hours of the night only permitted a late start of our morning, melting breakfast together with lunch. After I watched Erick chew his tapas of Spanish cheese and Iberic ham away, he agreed to drive me to something more animal-friendly. El Calafate (named after the Argentinean destination I visited no less than a year ago) is one of the many fully vegetarian restaurants the vibrant centre is home to, offering a low-price menu to the more budget-sensitive plantlovers among us. 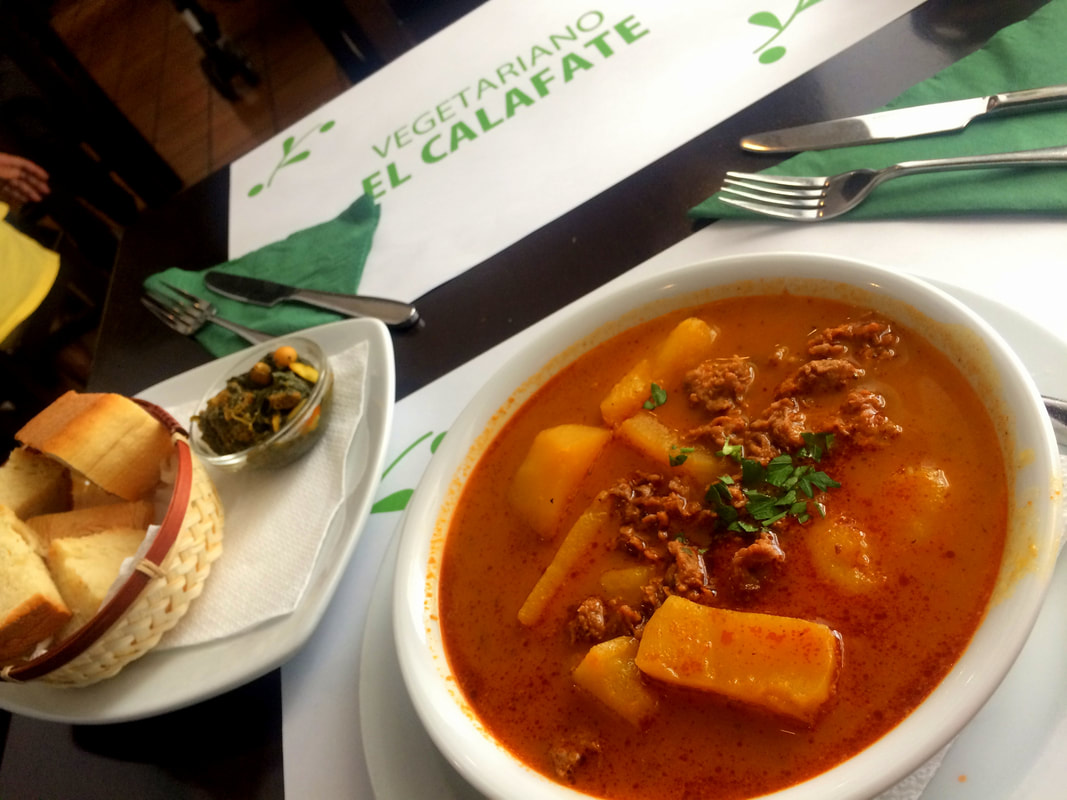 What are you looking at? A seitan and potato cazuela, vegetable-couscous and (outside of the photo) a soy-milk-rice-porridge, that’s what.

​
Subsequently Erick took me to one of his secret highlights: the Marriott Hotel roof terrace. And besides a spectacular view over the entire inner city and harbor, this roof terrace has a swimming pool.

A swimming pool that, ladies and gentlemen, is forbidden terrain for non-guests. I didn’t even want to swim, but now I did.

“Ehm Steph, maybe you should ask fist”, he stumbled. ​ 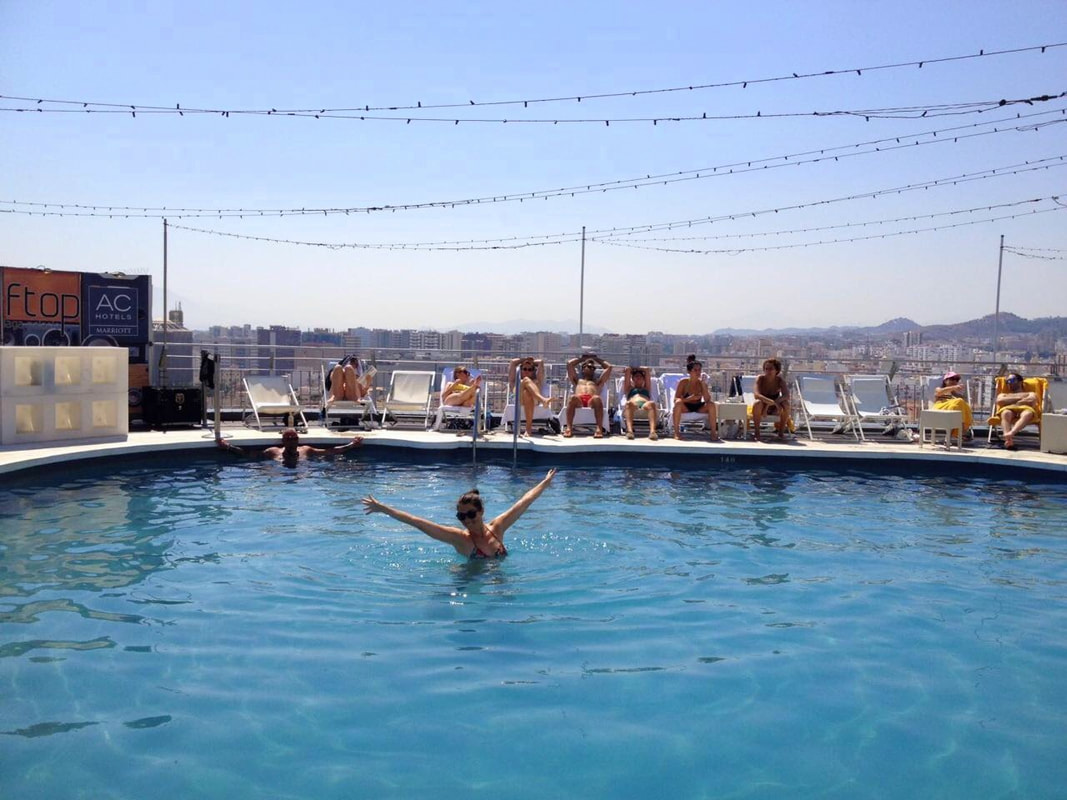 “I never ask, I just do”, I shouted just before I made a little water-bomb right next to the wealthy. Did I get caught? Yes I did. Did I get kicked out of this 5* property? Well, that’s a way to describe it. But before they figured out I was bullshitting them they already spent twenty minutes running around like headless chickens in the web of lies I carefully set out for them, providing me with plenty of time to refresh in style. 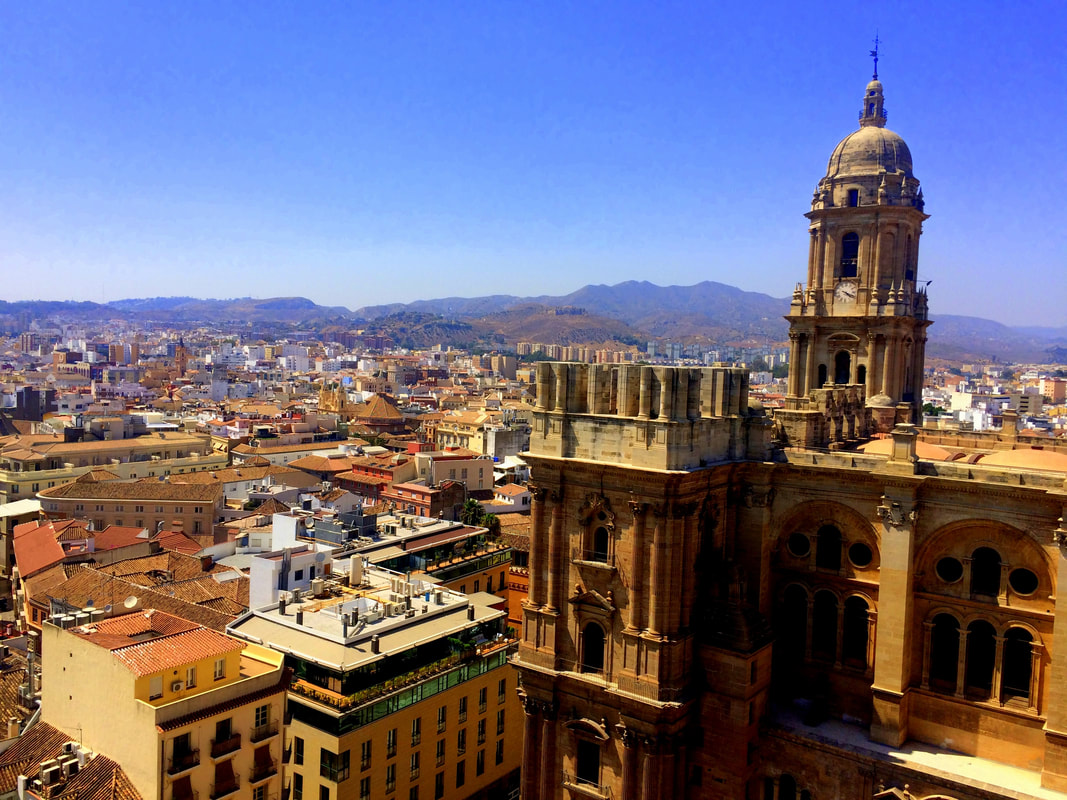 Time for yet another look-out point! Mirador Gibralfaro. Gibralfaro is actually a castle, that without providing a satisfying explanation was closed for summer… but if you make it up the hill and stop in the turn just before the entrance the mirador can make up for it, providing views over the beach town from a high-up angle.

A beach that, it’s hard to avoid it, must be seen from up close as well before leaving Malaga. So Erick started his bike again to drive me all the way down to the pier and via the coast up to the Peñón del Cuervo, a sight raided by mainly local visitors. And that’s not a good thing.
​
No offense, I adore the Spanish. Their good-hearted nature, passionate vibes and generous smiles make me even forgive their funny accent… but tidy they are not. It always hurts my heart to see a unique and gorgeous piece of nature, what Peñón del Cuervo unquestionably is, being hidden under a pile of trash and plastic. If you’re proud of your country (and I know they are), just take care of it, for fucks sake I don’t need to explain why. Okay, one potential highlight ruined, next!​ 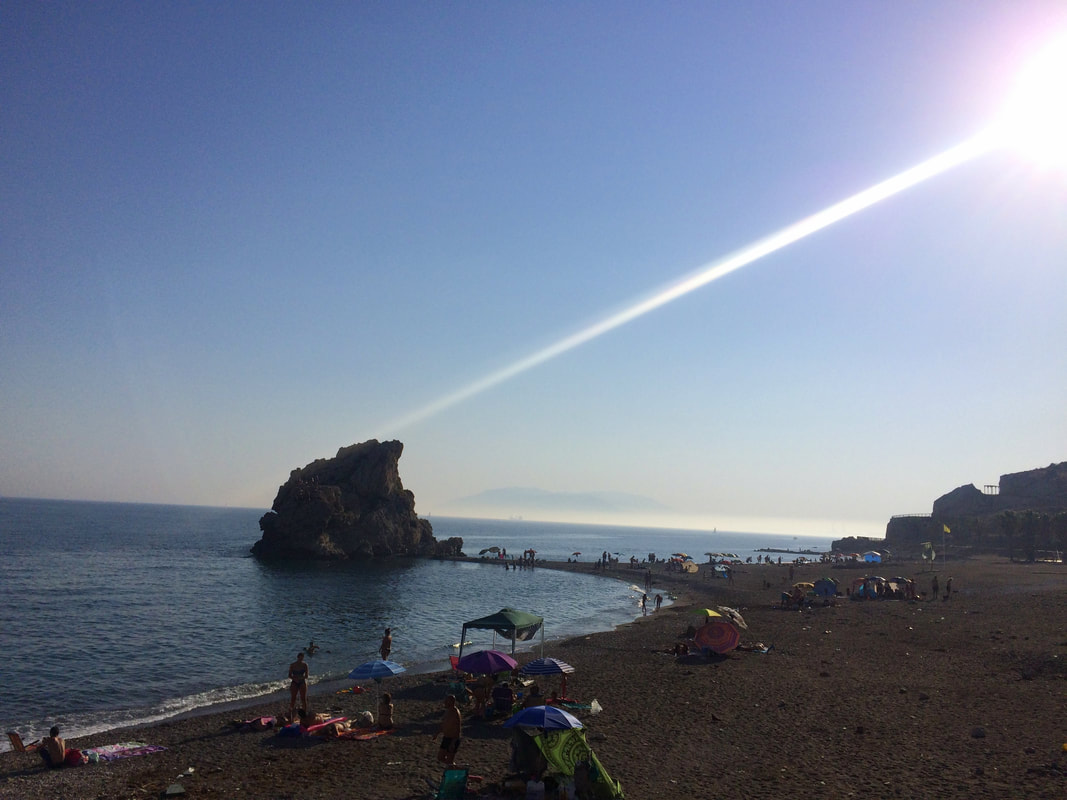 I felt like I saw the entirety of Malaga in one day, made possible by Erick and his bike, but I knew I had to dig a bit deeper. Culture always satisfies me, but I waited until Sunday as I’m bloody cheap as well… why pay for the museums when they’re completely free one day a week? Well, maybe because Malaga is in high season filled with Dutch folks at least as cheap as me (it’s a cultural thing, so far only Israeli’s beat us and I admire them for that) and you can literally crowdsurf over the visitors… after you waited in a line lingering through the length of 6 blocks to get in to begin with.
Not optimal, but sometimes you have to deal with what you got. Which was in my case an overcrowded Museo Picasso, a must in the city this internationally admired genius once called a home. True, you got me, I’m always the first to ridicule cubism, as the level of crap produced within this genre is simply too damn high. But here you got their guru. The master that simply can’t be beaten. And, who had a pre-cubism period too, hurray! I had to stand still at every single piece, because more than the sublime combination of forms and colors this man knows how to capture the sentiments of a scene, more than realism ever could.  ​ 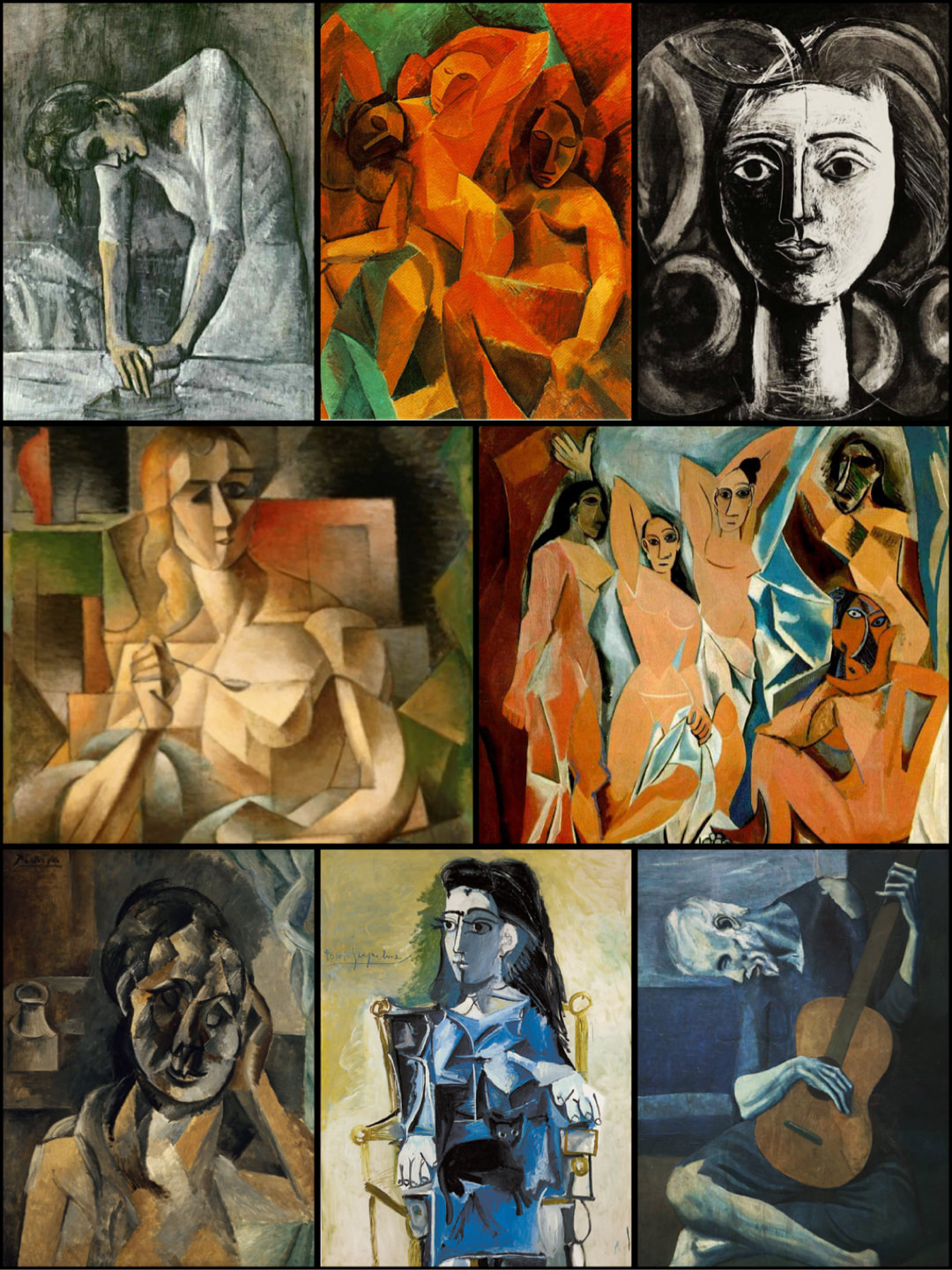 Another thing that’s free on Sunday is the Cathedral, because: mass. Isn’t it always free, as they used our tax money and donations to finance this giant golden structure that could provide housing for millions of poor and homeless to begin with? No, no it’s not. It’s The Church after all. 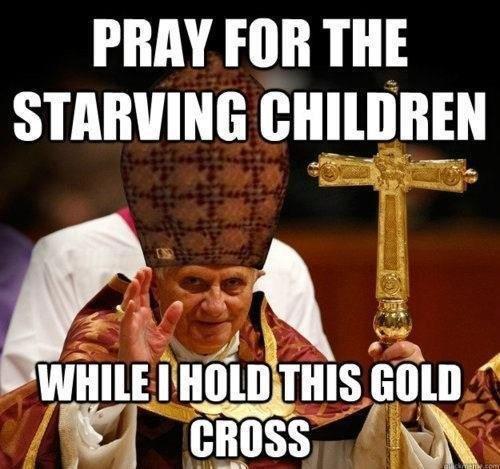 You were not allowed to take photos, but as not even God can judge me, here are some.
I still wanted to go scuba-diving, check off all the other museums and admitted, maybe an extra tan indeed wouldn’t hurt before heading up the cold north… but all that luxury choice stress made me just want to back off and do nothing at all, just head downtown and see what comes on my way.
Sitting on a terrace at Plaza de la Constitución, sipping an excellent cup of coffee the size of a soup bowl and watch life pass by in a city that positively surprised me. Modern and classic at the same time. Trashy and stylish. Meant for relaxation and thrilling adventure.

​Four days isn’t long enough to jump to any conclusions, but the first impression counts right? 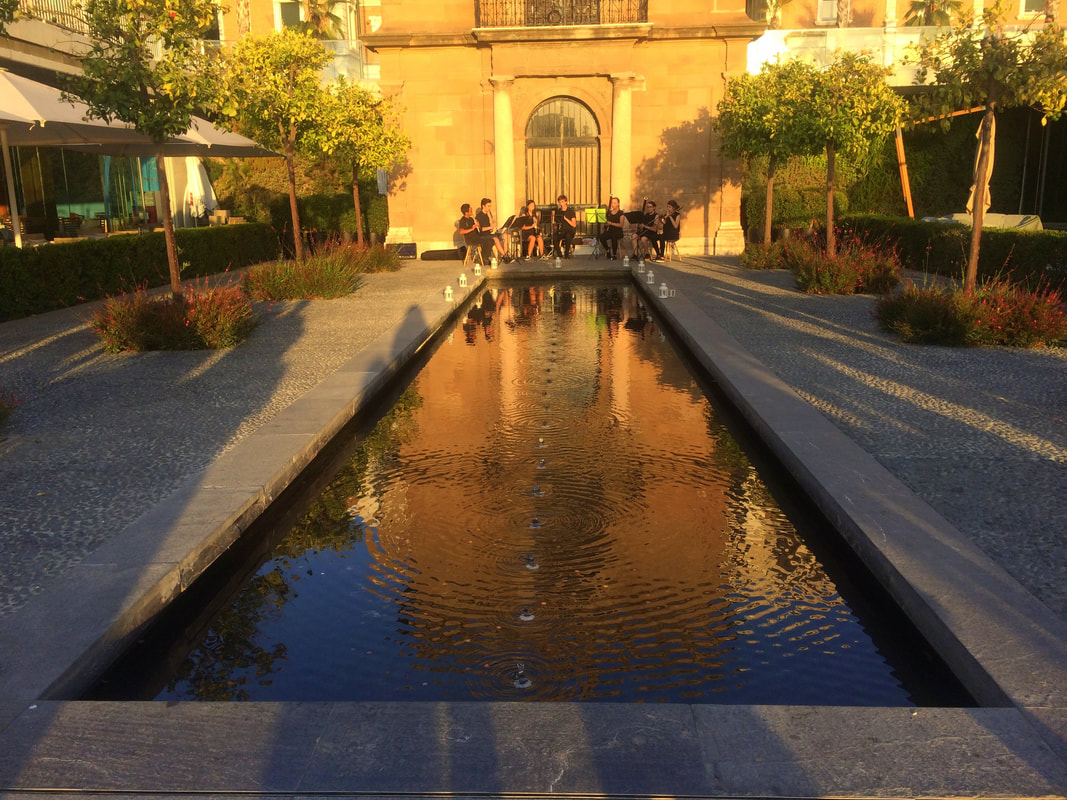 In order to support the travelers’ community, I spend many hours per week to adequately document all information and advices for prospective visitors, accompanied by a (hopefully) entertaining insight into my personal observations and experiences. This service is and will remain free. However, if you voluntarily want to make a contribution and support my travels and thus the creation of new stories and information supply, here is the button you’re looking for:
Donate
From Malaga I also went on a daytrip to Gibraltar to check off another kind-of-country… want to see how that ended? Have a look at the story here!
​
​
Related:
- Citytrips in Spain: Barcelona & Sevilla
- Walk like a pilgrim! 6 weeks on the Camino Frances towards Santiago de Compostela / Finisterre (900km) - check the reports here!
- A (doomed) daytrip to Gibraltar
​- Erick's hometown: Buenos Aires, Argentina
- Explore Cyprus: Check out the Cyprus Nature, Cyprus Top-5 Cities and the North Cyprus Blogs!
​- Just across the border: The sublime Algarve coast in Portugal
​- Europe's best skiing & hiking: Get your ass over to jaw-dropping Switzerland!
​- 8 ways to save money in Vienna, Austria
​​- German gems: Aachen & Frankfurt am Main
​- Discover more Belgium: Antwerp & the most kick-ass Flanders itinerary!
- Unravel the mysteries of Serbia
​​​- Top-5 places to visit in South Limburg [The Netherlands]
- Beaches in Mexico: Cancún (don't go there), Cozumel & Tulum
​- Beaches in Panamá: San Blas, Santa Catalina & Costa Abajo
- My 1-month Workaway-project on an (almost) uninhabited island in Panamá: Isla San Cristóbal, Bocas del Toro
- Beach getaway: Nicoya and the Costa Rican coast
​- The tropical beaches of Tortuguero, Costa Rica
- Beach and surfspot in El Salvador: El Zonte
​- The beaches of Honduras: Tela & Roatán
- Enjoying the beaches of Nicaragua: Isla de Ometepe & Playa Gigante
- Beach hangouts in Uruguay: Cabo Polonio, Barra de Valizas & Punta del Diablo
- Argentinean beaches: Puerto Madryn & Colón
- Brazilian beaches: Florianopolis, Ilha Grande & Rio de Janeiro
- Paraguayan beach: Encarnación
- Bolivian beach: Copacabana & Isla del Sol
- Colombian beaches: Palomino, Cartagena, Santa Marta & Tayrona National Park, Colombia
​​- The ultimate off-the-grid beach & surf spot in New Zealand: Port Waikato
​​- Malaysia's tropical scubadive-island: Pulau Tioman
​​- The psychological start of a journey... in the city of Marrakech [Morocco]
- 10 typical Dutch celebrations no traveller should miss out on
​- Budget Bucket List hitchhike trip to... Kosovo!
​​- Discover the splendours of Turkey: Istanbul on a Budget & Reasons to visit Edirne