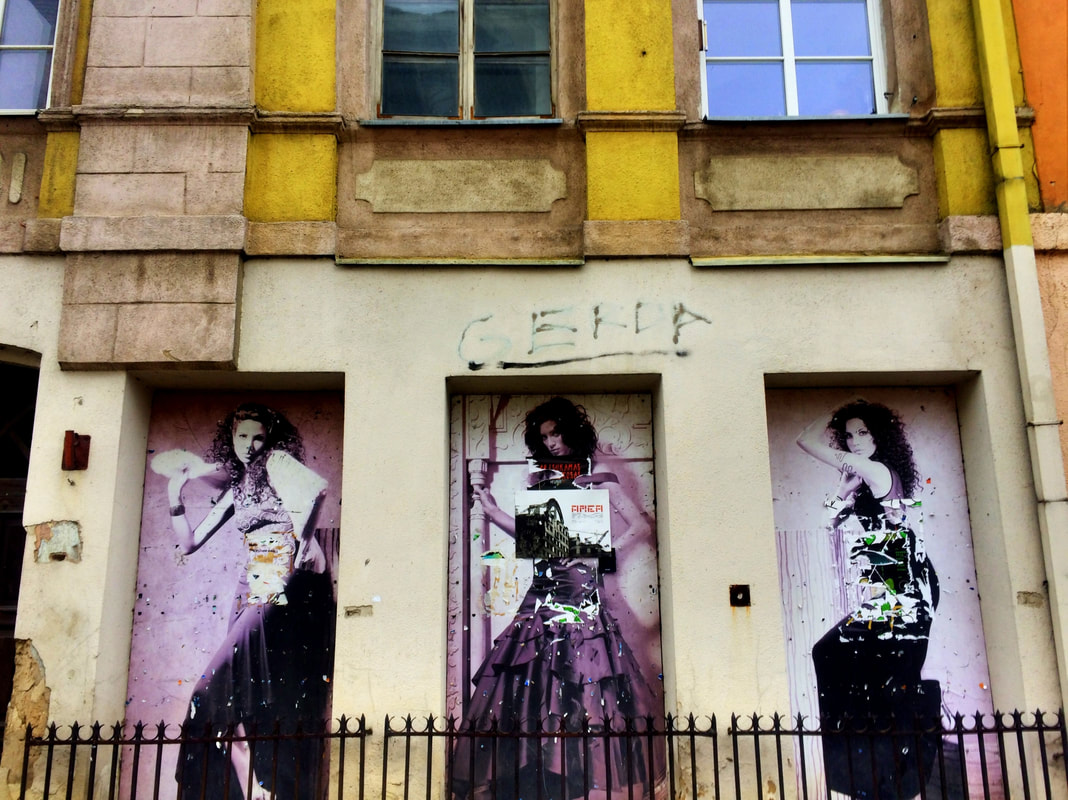 I only met one person in my life that had been to Lithuania. And that person was from Lithuania.

The reason why I ended up here is as impulsive as the way I ended up in Scotland. I wanted to visit some friends in Denmark, but there were no cheap Ryanair flights (I’m talking 10 bucks a flight) going from the Netherlands to Copenhagen… so I traveled via Scotland and stayed another three weeks there while I was there anyway. Same story with my return trip, there was no cheap flight back so I checked where this budget-airline did fly to. Kaunas. Where the hell is Kaunas. 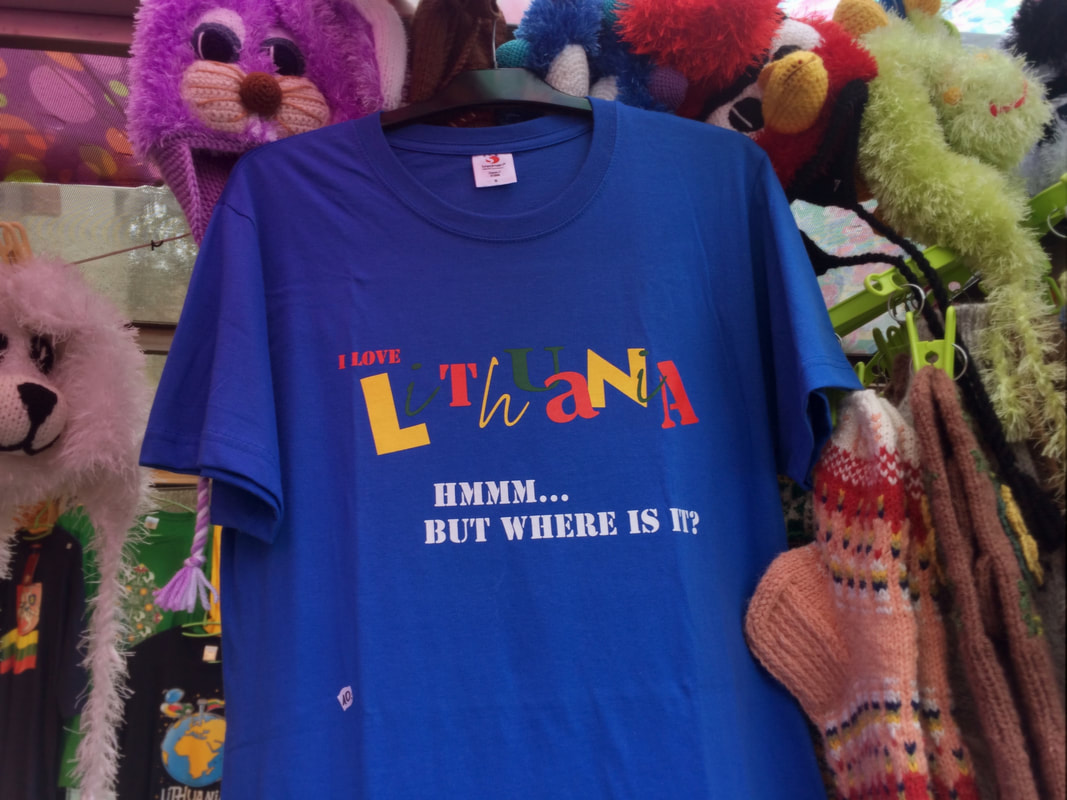 So there I sat. In an airplane crossing the Baltic Sea from Scandinavia to the Baltic States. In between people talking in a language to which I had zero reference points. It sounded like a mixture between Slavic, Polish and Russian but then very different, with mouth movements I couldn’t even slightly approach. I stared at the newspaper of the overweight bald man sitting next to me (half over me, to be frank) and saw the characters and accents.

Words like dvynukėms, priežasčių and besidžiaugusiems… Oh man. Please tell me this is going to be alright. 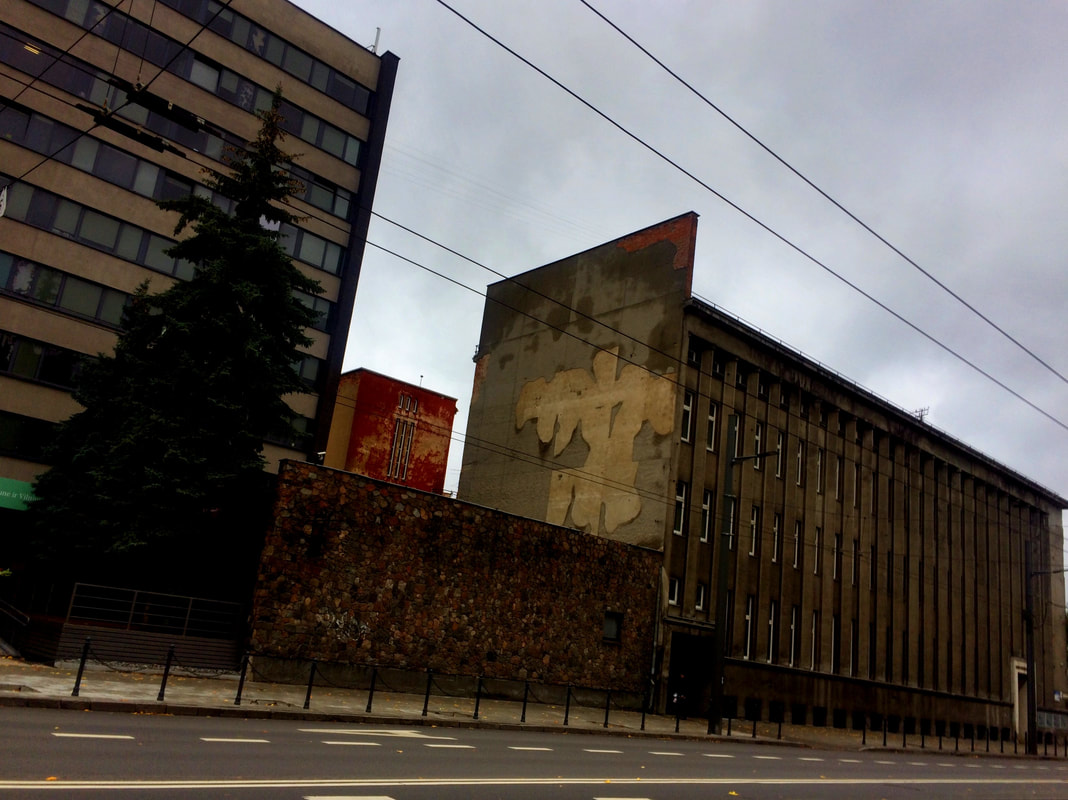 ​I almost blew off the airplane stairs. Holy cow. I thought I knew what ‘cold’ feels like, but it gets a whole different meaning in the Baltics. Denmark could be considered tropical next to this. I rushed inside to quickly put on all clothes I brought with me, six layers. A bit overwhelmed I called my Couchsurf host Polivos (or Povilos, or Poivus, whatever they name their people here), who rushed to pick me up.

He brought me to his big house where he lives together with his Russian wife Albina, who he met via the internet even though she didn’t have internet. Maintaining contact with her sister, Polivos convinced Albina to come over to Lithuania to meet him and they were married within a month. Whatever works. Fourteen years later she looks exactly the same as in the photo albums with the wedding pictures they showed me, she driving to the aisle on a heavy motorbike in long white leather boots and a tight embroidered dress. Her long black hair dancing on her back, her full sensual lips just peeking out under the veil, like a Siberian version of Angelina Jolie. In the background people sat on plastic chairs drinking vodka around a fire, posing for pictures with a restrained smile in front of a cement wall. 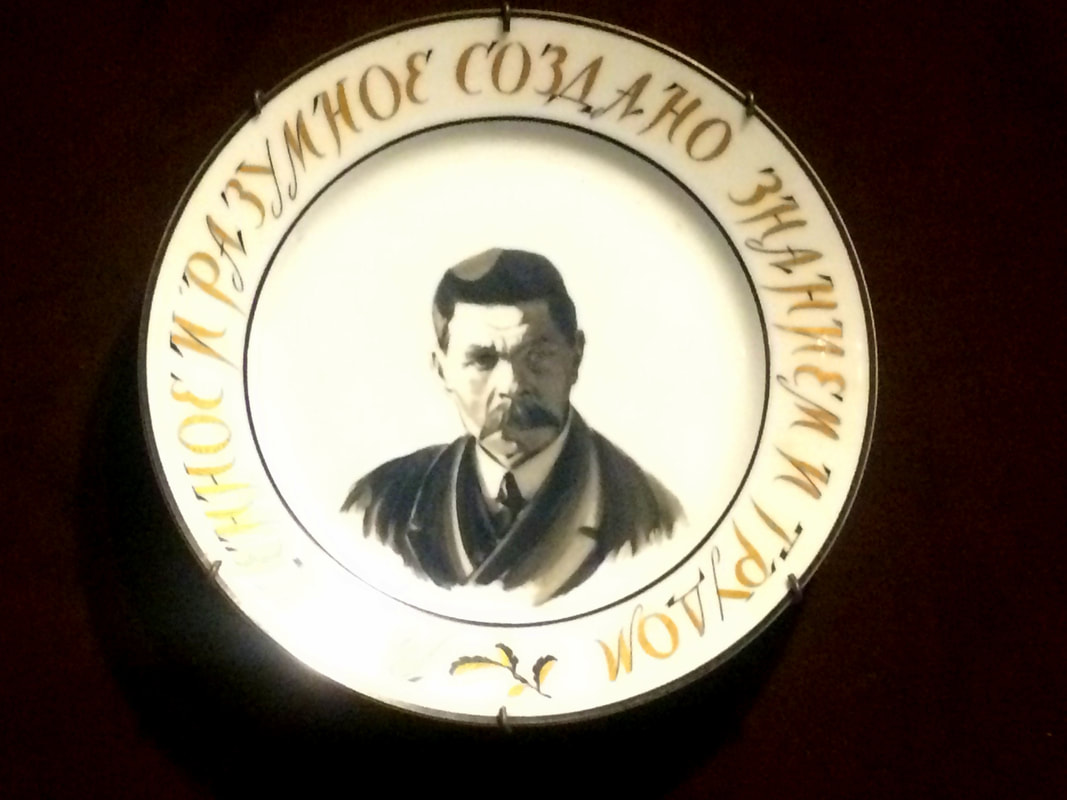 The secret to her eternal youth? The gym. Every single day.  Albina spoke Russian, Polivos Russian, Lithuanian and Polish, and I speak everything but those languages so our communication options were rather limited… but the titty dance he demonstrated showed me they spend sufficient time in there.

​And as I was leading their lives for a few days, so was I. Sitting in between the weights and lifting machines I realized communism never really left the country, watching seriously muscular people with pale skin train with Spartan precision like another Cold War was on the way. I suddenly realized I didn’t see anyone smile here yet, the entire day… maybe the cold freezes a permanent expression on their faces. 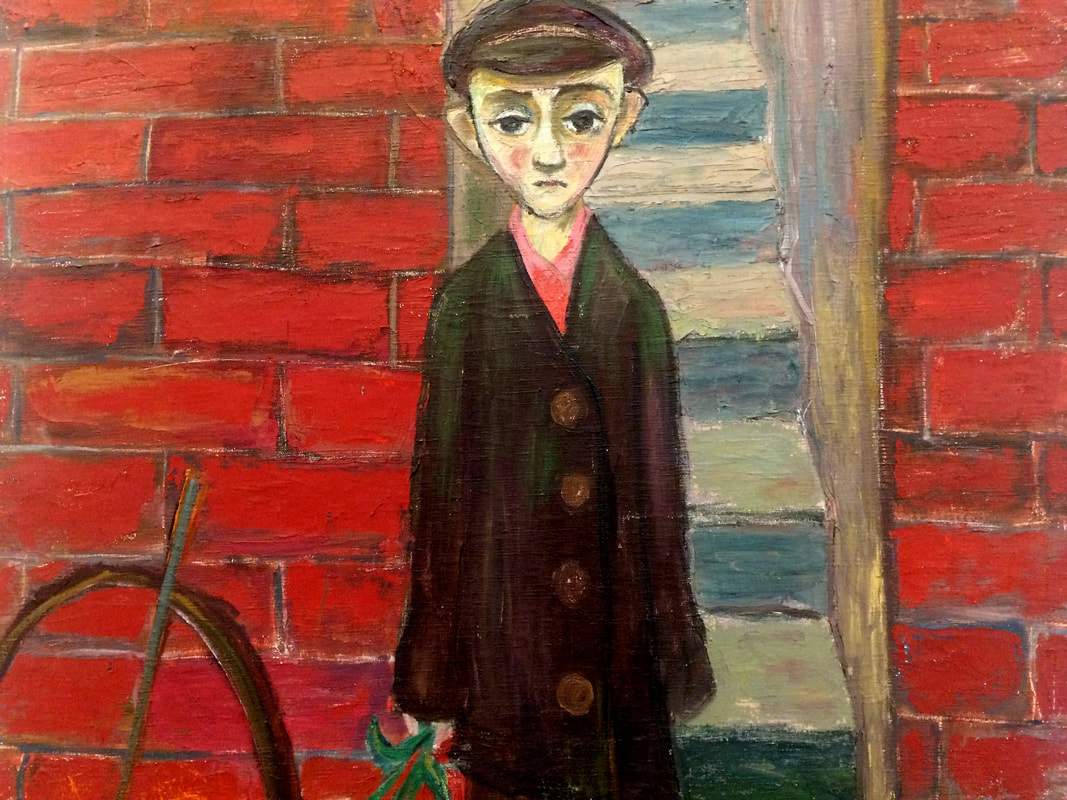 A local artwork - reflecting the overall mood of Kaunas


​The evenings were long and quiet. I was treated with hospitality: local food (potatoes, mushrooms) was prepared for me, rides were freely given to me, a bible in Spanish was provided to me (very religious people having an atheist in the house), accompanied with photo cards about the blessings of Jesus… but without talking it’s hard to share. So I bought wine, social drinking is always good, right? Right. That was gone in ten minutes. Apparently people know how to drink fast here. 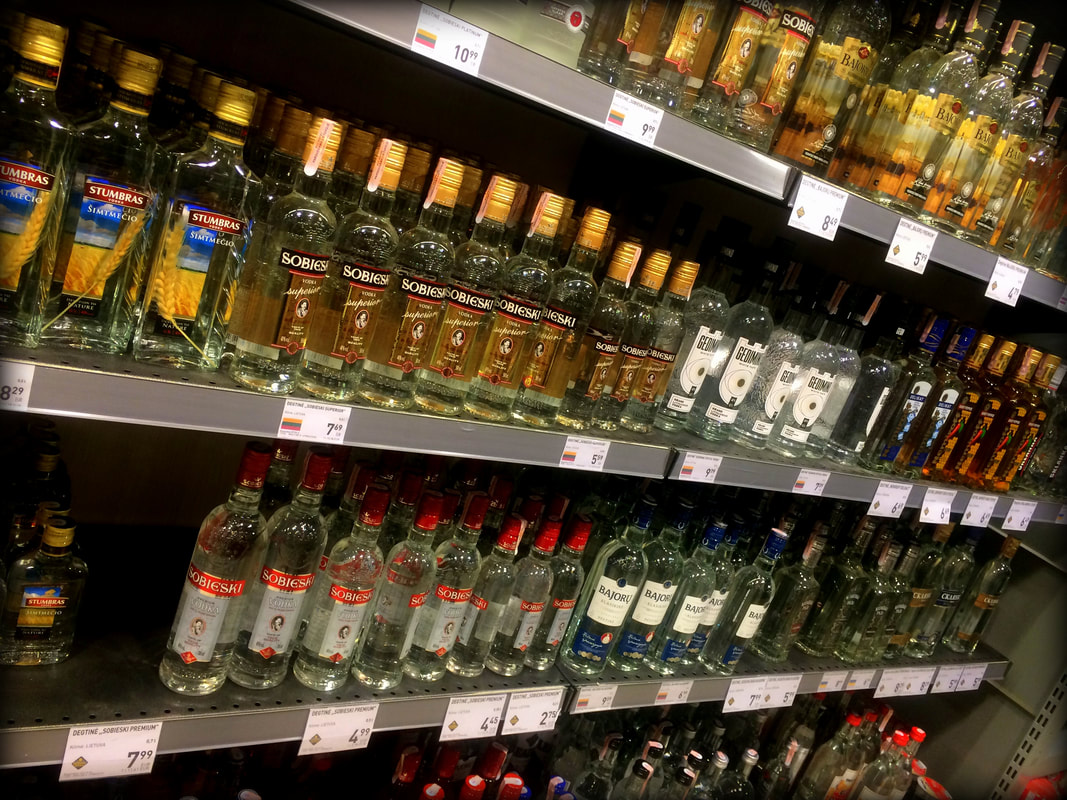 ​A significant part of the local supermarket

​
So I watched all Youtube-videos about Lithuania that Polivos could find on the internet. And then all their photo albums. All their holiday photos of every single trip they ever made. And a digital introduction to the famous Stalin Park, a local attraction celebrating the joys of totalitarian communism (ehm? my daily dose of wtf). And then it was time to sleep, in the kitchen next to the tarantula they call their pet. 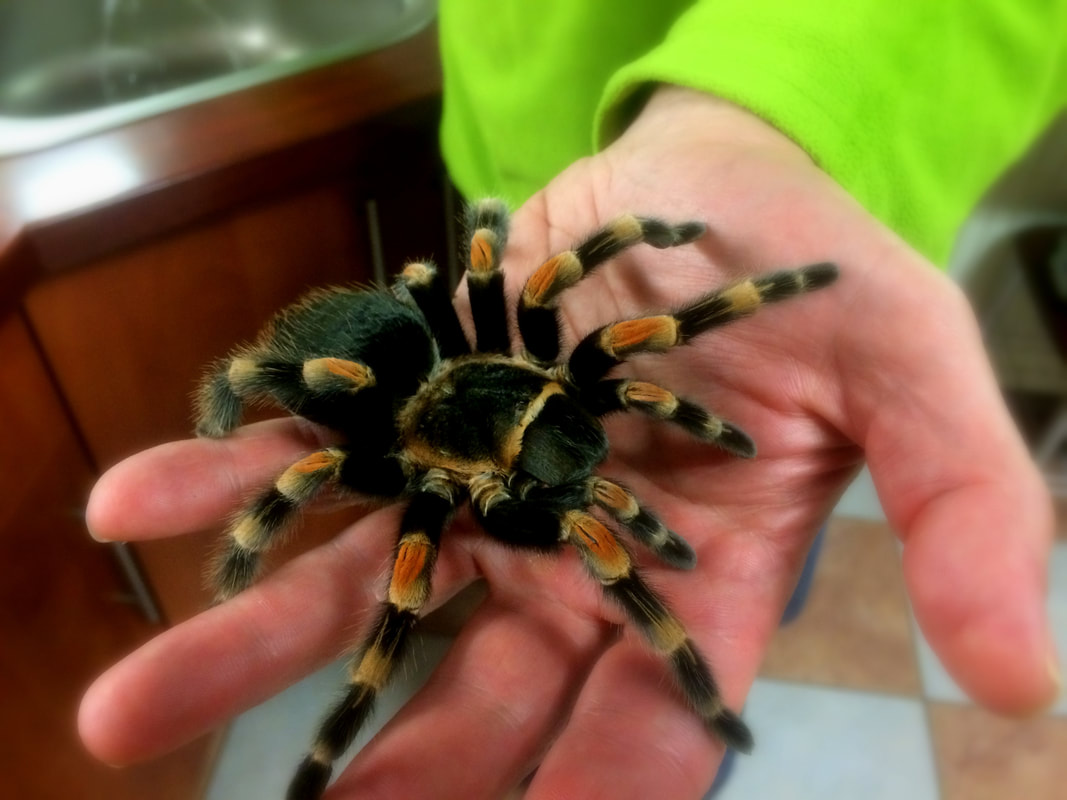 ​Maybe I should just head down town and discover the wonders of this place called Kaunas. In the bus I stared at all the women with bright pink and purple eye shadow, eyebrows drawn on their foreheads in surprised-looking bows. Their porcelain faces powdered to look even whiter, their hair dyed platinum to look even blonder, dark roots marking their skull. I wouldn’t necessarily describe the architecture as particularly scenic or mood-uplifting. Long grey blocks, balconies crumbling off the cement…
Communism was ended not so long ago, around 1990 after the declared independence of the Soviet Union, which is not enough time for a cityscape to recover from its effects 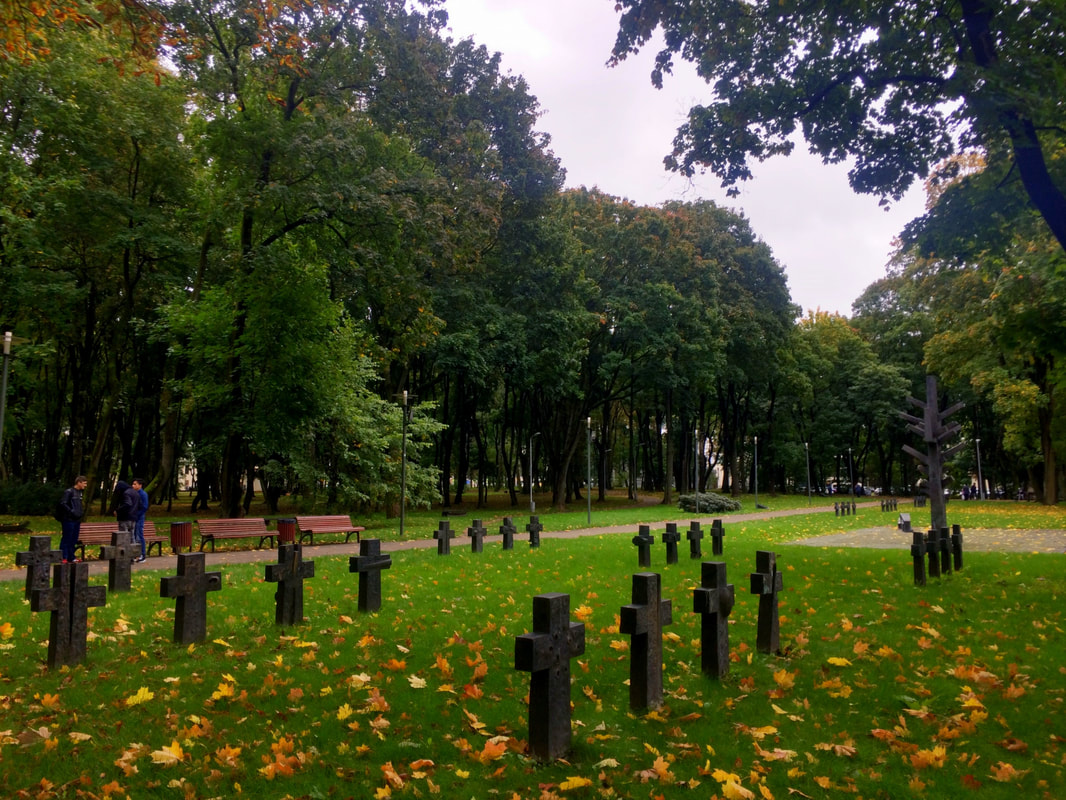 … no this is not a cemetery, it’s a park where children play and people have picnics. Obvious, right? 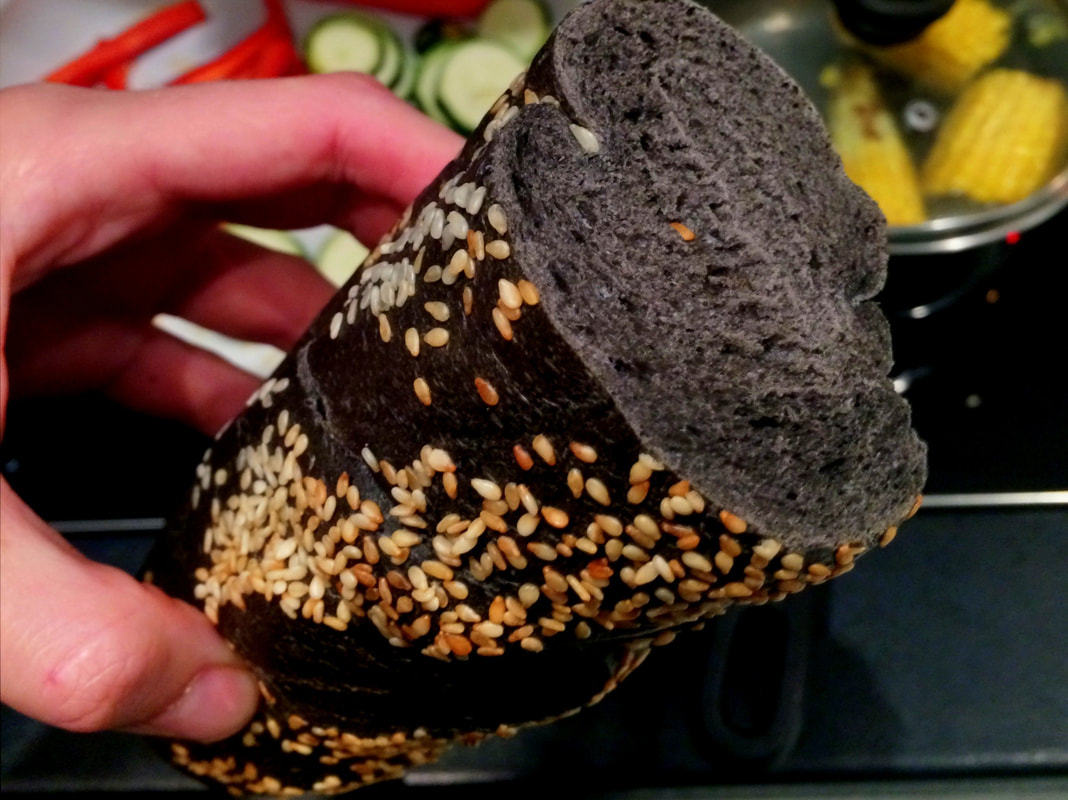 Even their bread is pitch-black, soul food for the depressed and satanic

​
I strolled along the dark lanes, inhaling the exhaust fumes of the permanent traffic congestion. I ended up at the Picture Gallery, housed in a deserted building on the edge of the city ring. Inside I found modern art glorifying bull fighting, which promptly enraged me, alternated with Chinese art carved out of ivory which can’t be called quite ethical either. 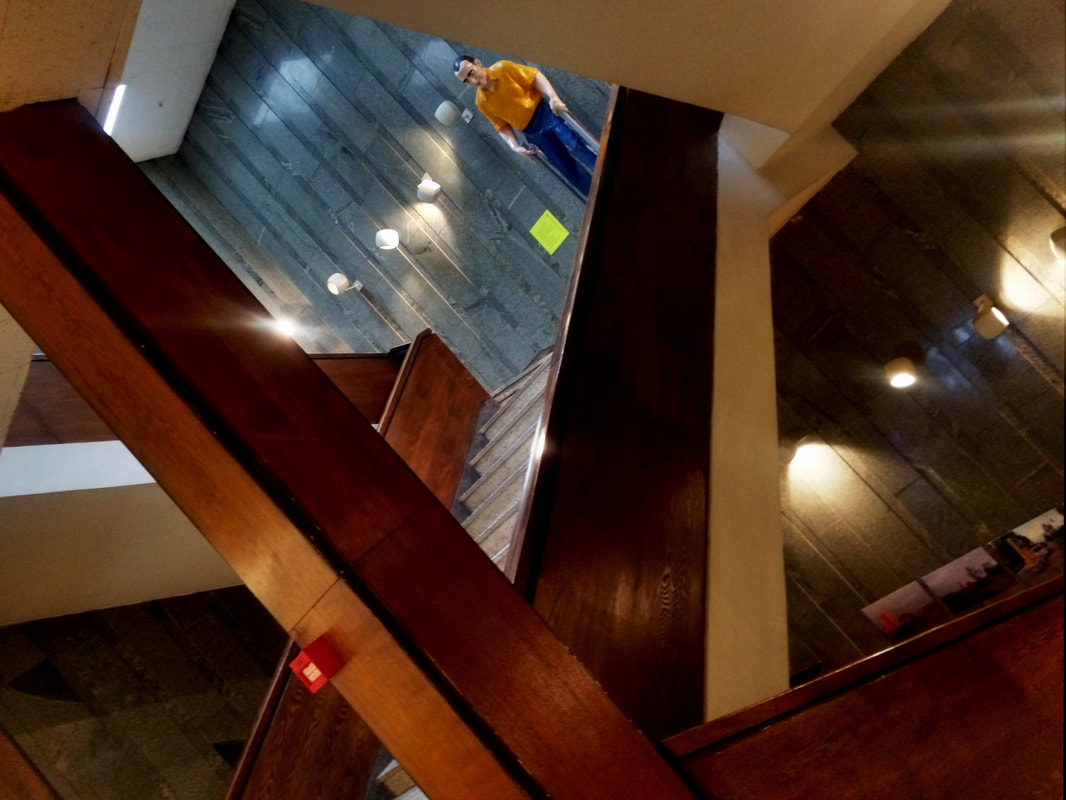 … and I don’t know what this is, but it scared the shit out of me.

​
​I tried to trace down the Museum for the Blind, which actually sounded quite interesting to me, but found the Art Gallery Mykolas Žylinskas instead. I approached the intimidating and highly uninviting building and asked if I could buy a ticket. Apparently today was my lucky day, as all museums were free of entrance. I was kind of glad I didn’t have to pay to see this collection of baroque furniture and porcelain vases… you know, kind of the stuff your grandmother decorated her house with. I learned for the ugliest clock ever produced in the history of humanity you need to go to Kaunas. 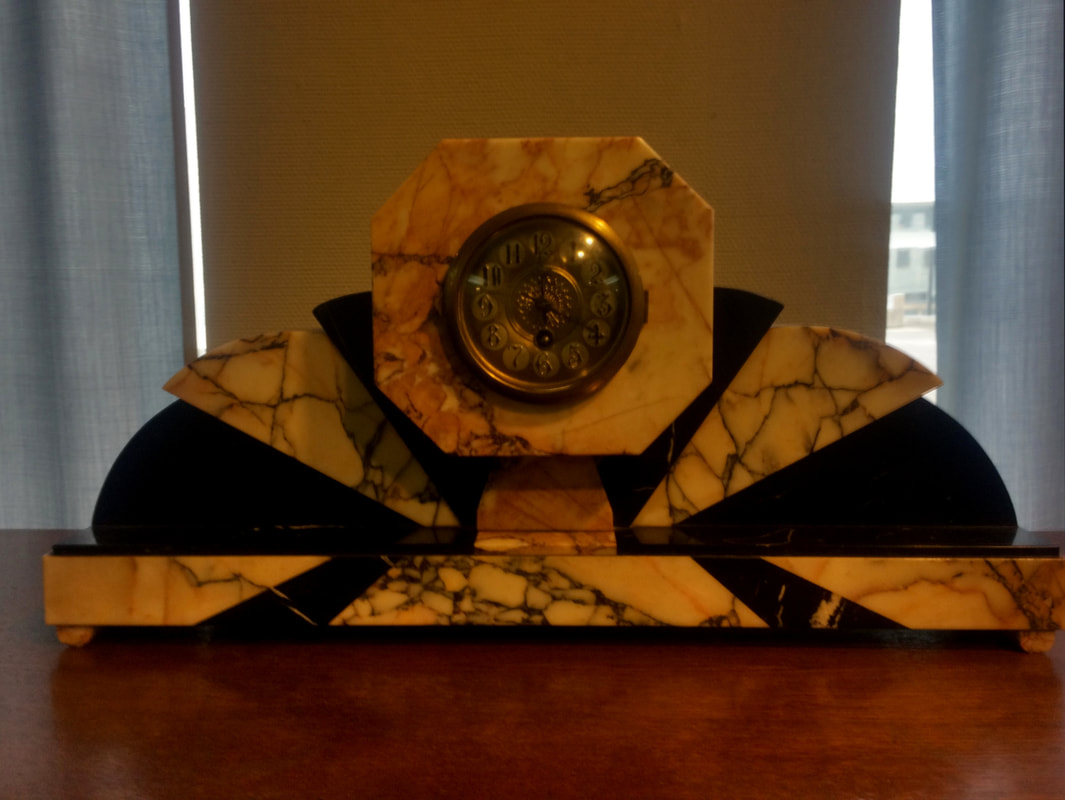 But that said, they do have a real mummy. PLUS a baby mummy. Can’t argue with that, it’s quite intriguing. However, I quickly got annoyed with the bulky women in checkered skirts, fur coats and hairsprayed wind-proof hairdo’s following my every move, as apparently their job was to watch the only guest they had. So I quickly bought a 6-cents postcard with a church on it for my hosts, as I assumed these hardcore evangelics would appreciate that, and continued my day. 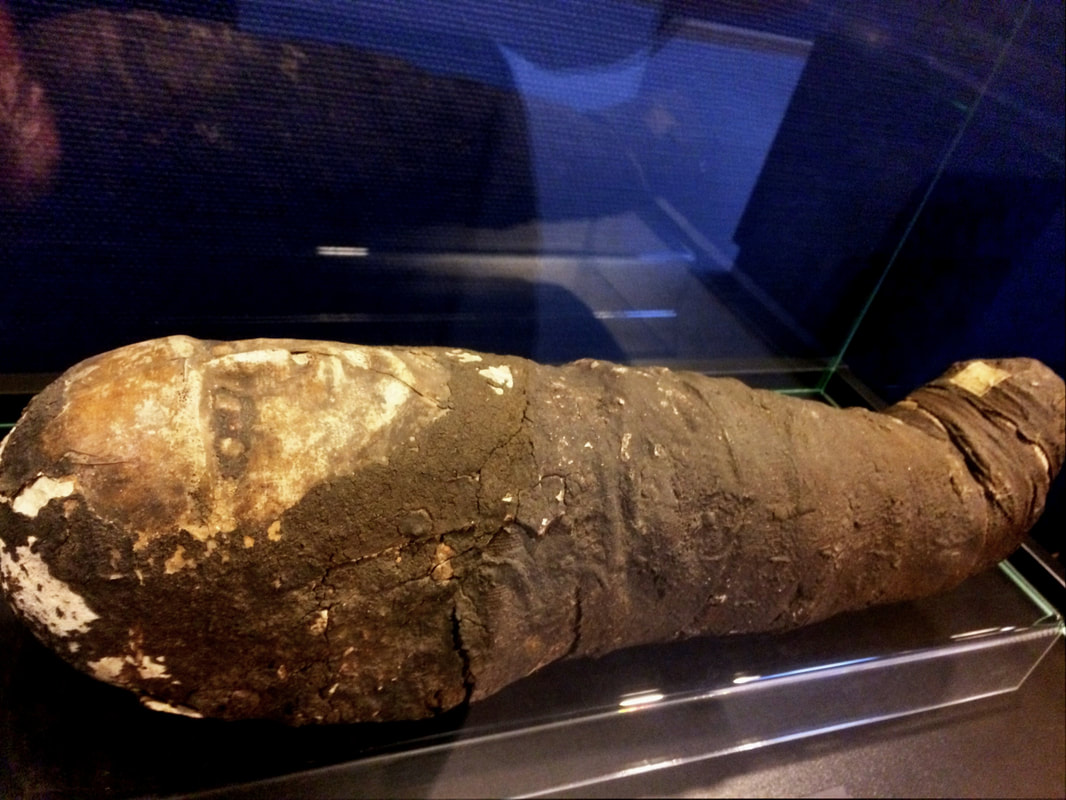 Kaunas, the ultimate place to get excited about death

​
I followed the pedestrian shopping streets that hosted the same coffee shop every twenty meters. I watched old ladies selling geraniums in kitsch plastic vases and listened to the sound of construction that seemed to be echoing through every corner of the city. 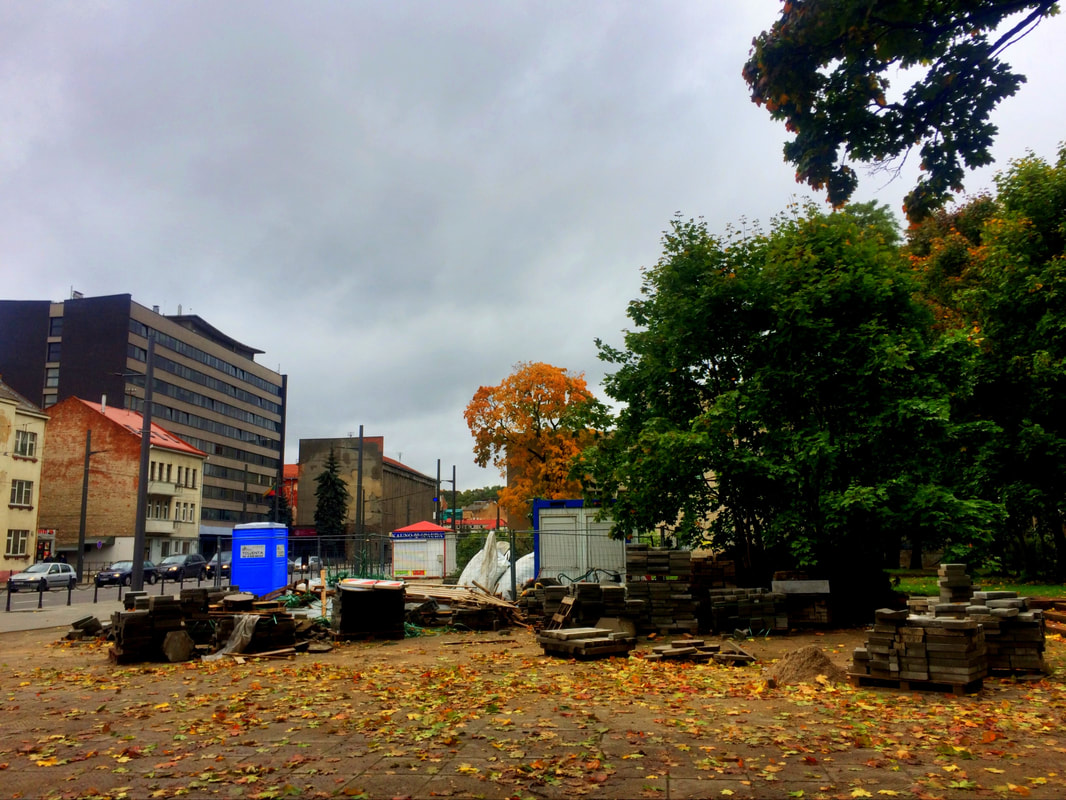 ​I entered the Devil Museum, just to make a silent statement against the religion overflow the last few days…
… and checked out some trendy-looking photo gallery with confusing imagery I didn’t understand. 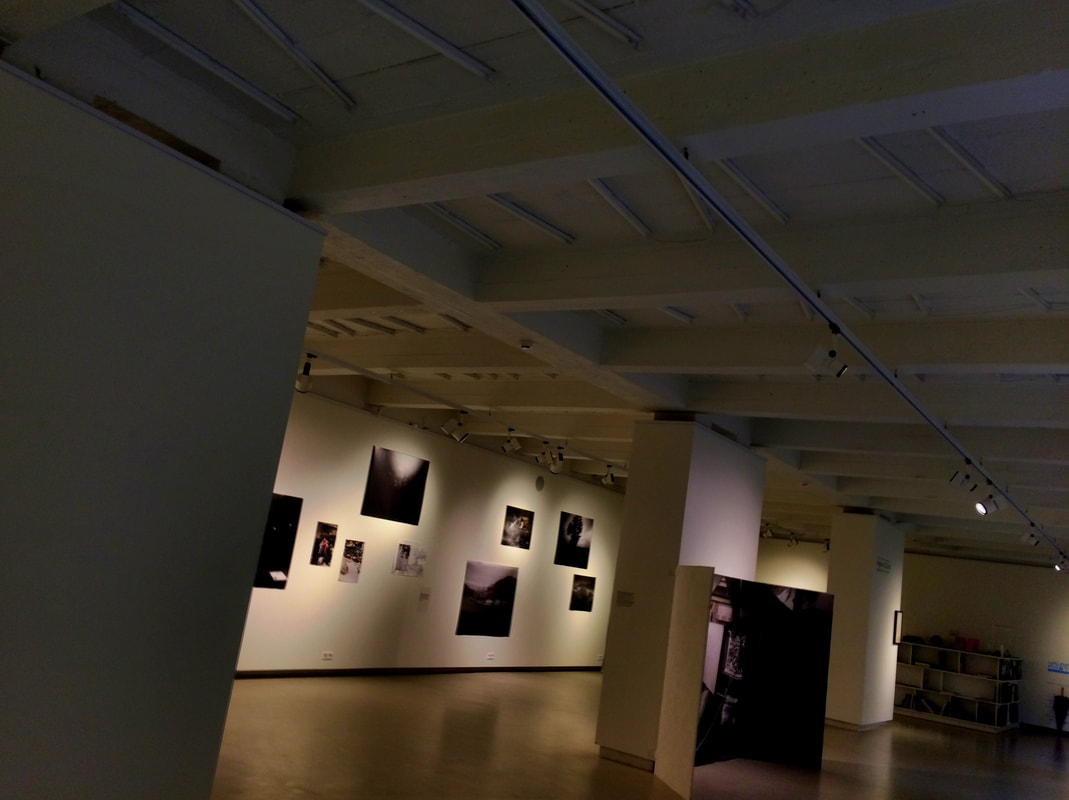 ​I tried to talk to people, but they seemed shocked with social confrontation and uttered some words in that language I cannot comprehend. Even smiling to strangers made them shake their head in confusion, quickly moving away from me. So I waited on a cement wall until the day was done, interrupted only by the pure necessity to buy an extra sweater as the cold slowly infiltrated my bones causing an unstoppable shiver.

I just wanted to leave. 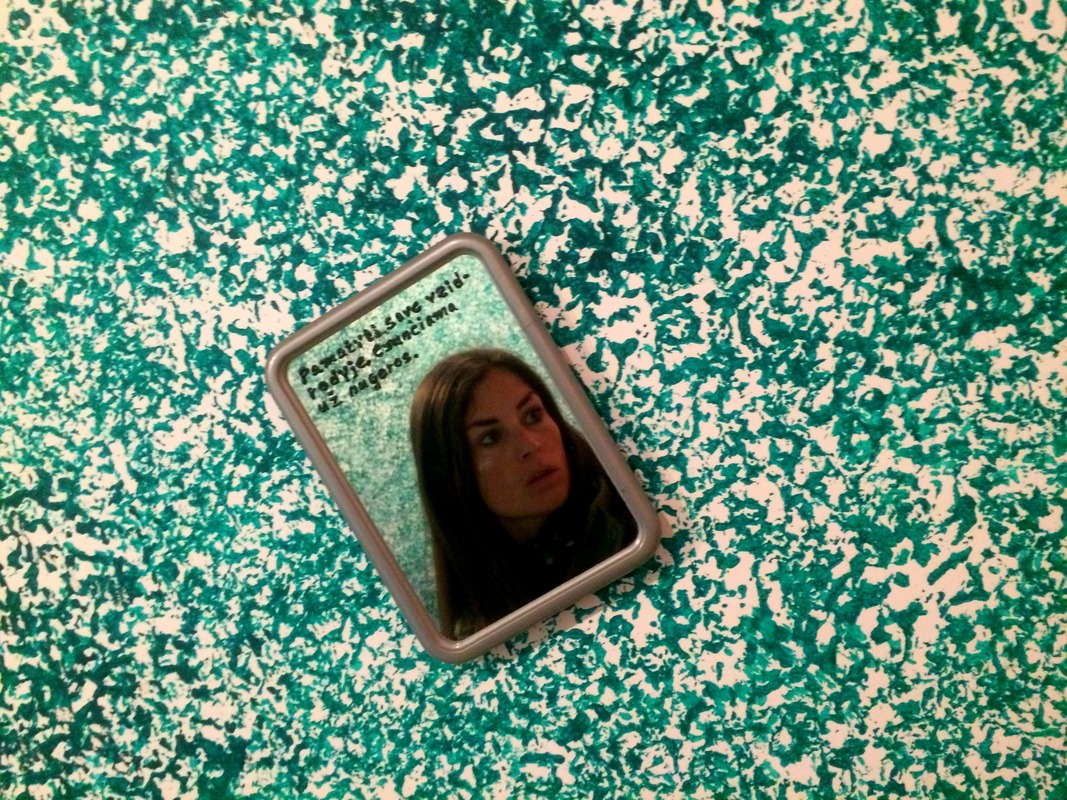 And if my story still didn't put you off, maybe this legit travel advice will. It's on the internet so it must be true.

Jokes aside, after Kaunas I moved to Vilnius and Aukstaitija National Park and, contrarily to what this introduction with Lithuania suggests, I had the time of my life here. I ended up adoring this country, Kaunas just absolutely didn’t do it for me.

​
In order to support the travelers’ community, I spend many hours per week to adequately document all information and advices for prospective visitors, accompanied by a (hopefully) entertaining insight into my personal observations and experiences. This service is and will remain free. However, if you voluntarily want to make a contribution and support my travels and thus the creation of new stories and information supply, here is the button you’re looking for:
Donate
Related:
- A perfect wooden cabin in the middle of absolutely nowhere: Aukštaitija National Park, Lithuania
- Citytripping in Vilnius and rope-jumping in Alytus
​- Europe's best skiing & hiking: Get your ass over to jaw-dropping Switzerland!
​- Budget Bucket List hitchhike trip to... Kosovo!
- The 3 golden rules to travel Sofia on a budget! & Why you shouldn’t miss out on Plovdiv! [Bulgaria]
- The Gorilla Mega Classic fitness competition in Cuenca, Ecuador
- The city where humanity reached its lowest point: Cancún, Mexico
- A horrendous night in Copiapó, Chile
​- The least exciting place in Colombia: Manizales
- The arsehole of Ecuador: Guayaquil
​- Not worth the effort: Huacachina, Peru
​- Avoid avoid avoid! San Juan del Sur, Nicaragua
​​- One to not include in the bucket list: Manila, The Philippines
​​- Working out with Couchsurfers: Oaxaca [Mexico], Xela [Guetemala], Edinburgh [Scotland]
​​- 13 Strange Observations of South Korea
​​​- Guest Blog 'Kosovo Girl Travels': Travel tips and stories from Kosovo's first and only travelblogger!
​​- Check out Budget Bucket List's FAVORITE HIKING DESTINATIONS worldwide!
- Visit Balkan's finest: Montenegro's National Parks Blog, Kotor Bay & Lovcen NP and Cetinje, Durmitor NP, Podgorica, Prokletije NP and Montenegro's Coastal Towns Blog
​- Read about Bosnia & Herzegovina: Mostar, Blagaj, Trebinje, Sarajevo, Jajce, Banja Luka and Sutjeska National Park (incl. Maglic Peak - the country's highest!)