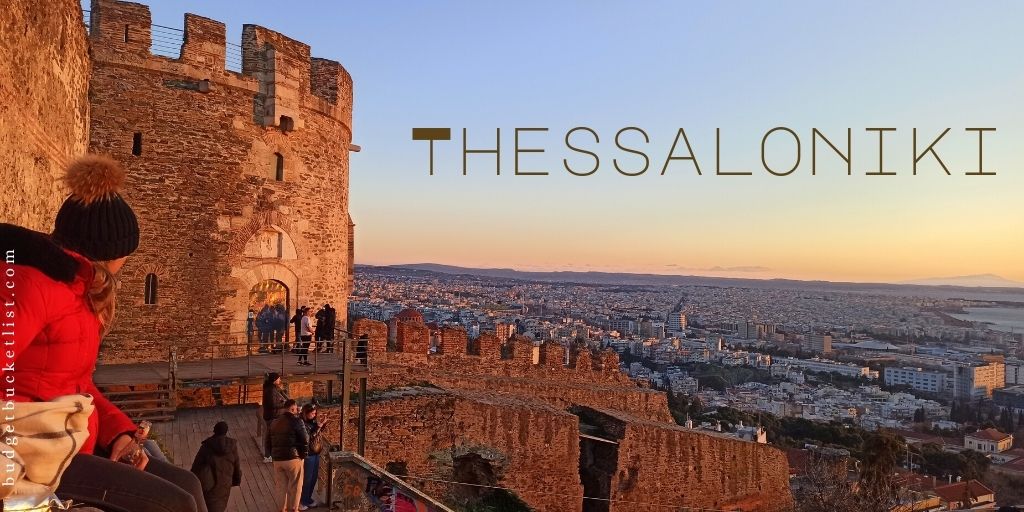 Not in the story-mood? Scroll down for the Quick Budget Fact Overview: an itemized information summary of Thessaloniki! ↓
On paper, Thessaloniki has a lot to offer. Greece’s second largest city not only functions as an economic powerhouse, the harbour town is also renowned for its lengthy list of festivals, radiant nightlife and cutting-edge cultural scene. The Port of Thessaloniki’s prime positioning on the Thermaic Gulf, tucked into the northwest corner of the Aegean Sea, has been proofed quite commercially lucrative indeed… However, it’s exactly that industrial character that leaves quite a visible mark on te city’s appearance, dominating the otherwise appealing remnants of the foregone Byzantine and Ottoman times. Somehow, Thessaloniki was crowned the European Capital of Culture in 1997… she said, scratching her head. A corrupt city marketing trick? Or is Thessaloniki simply a tough nut to crack and am I obviously missing something? I went with the latter, as that’s always a good motivation for a thorough exploration.


The time has come to present my findings. What did I trace down in Thessaloniki that I actually liked? 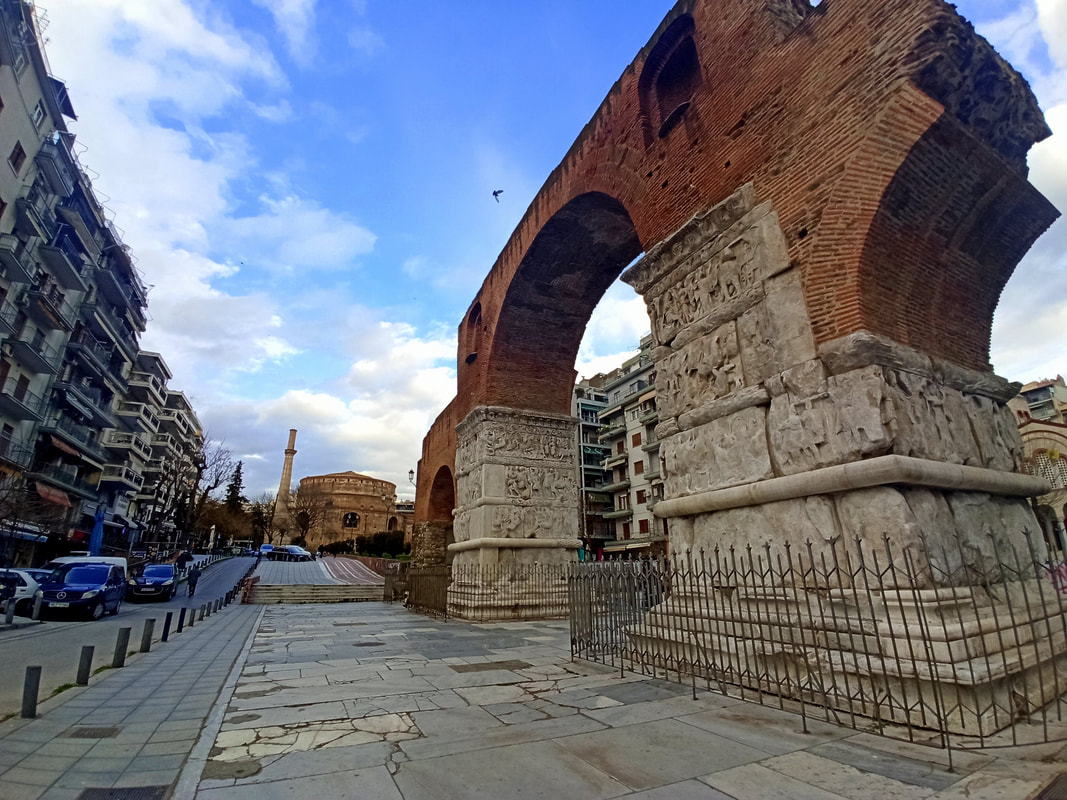 Too busy to read now? No problem, save it for later!
​Save on Get Pocket | Save in Browser Bookmarks| Save on Instapaper
​UNESCO World Heritage Sites

As a bundled listing, the “Paleochristian and Byzantine Monuments of Thessaloniki” are included in the UNESCO World Heritage List due to their outstanding universal value, ranking among the most significant monuments worldwide dating from the Byzantine period. The monuments included are believed to have influenced the monumental arts with their crafty frescoes and mosaics, while functioning as one of the first bases benefiting the spread of Christianity (they phrase it like that’s a good thing).

To thoroughly dive into this, let’s go back in time for a second: The city of Thessaloniki was founded in 315BC by Cassander of Macedon* as part of the Kingdom of Macedonia. When this kingdom fell (in 168BC), Thessaloniki merged into the Roman Empire, serving as the capital of the province of Macedonia. When the Roman Empire split up in two, Thessaloniki grew out to be the second largest and wealthiest city of the eastern Byzantine Empire (only beaten by Byzantium, also named Constantinople / current-day Istanbul). The metropolis formed an important trade hub on the Via Egnatia, the road connecting Dyrrachium (Durrës in Albania) and Byzantium.

I’m not sure exactly how much time you have planned in Thessaloniki, but I recommend to at least visit a few of the list, surely including the Heptapyrgion… a prime sunset spot!


* He named the city after his wife Thessalonike, who was Philip II’s daughter and Alexander the Great’s half-sister. You can trace down their statues around town. 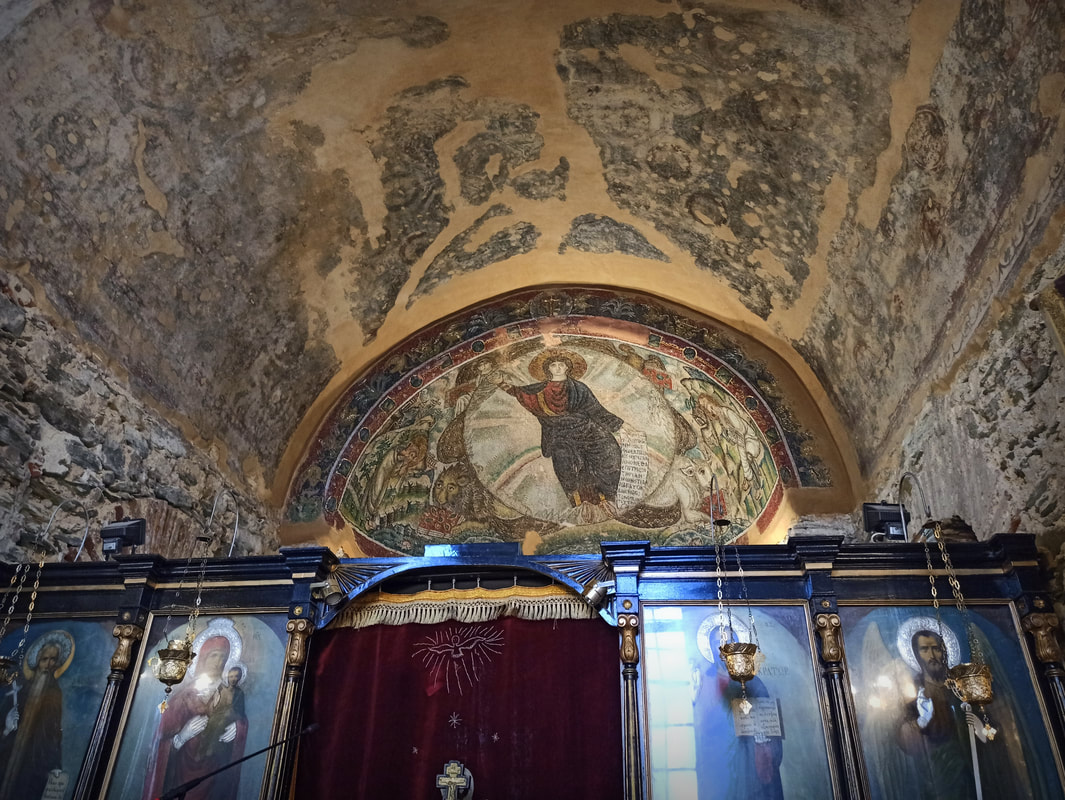 Many of the mentioned UNESCO sites are located in the most attractive part of the city: Ano Poli, the “upper town.” This area was the only part of Thessaloniki that survived the Great Thessaloniki Fire of 1917, wiping out most of the city and leaving 72,000 people homeless (and 70% unemployed, due to destroyed businesses). The Old Town truly is a world apart from the city center… Think narrow swirling streets, adorable traditional houses and alfresco tavernas.

Besides a sizeable chunk of the Byzantine treasures, the area also includes the Atatürk Museum and house of birth. Wait, you mean the founding father of the Republic of Turkey… what the hell is he doing here? Well, the Greeks and Turks go way back. It all started in 1430, when Greece and the entire surrounding Balkan area was conquered by the Ottoman Empire for a duration of nearly five centuries. Thessaloniki was captured by Sultan Murad II, who sacked the city and enslaved about one-fifth of the population. During Ottoman times, Thessaloniki didn’t lose its relevance and, together with the now-Turkish city Smyrna, formed the main trading hub. Independence was only obtained in 1912 and as such, Kemal Atatürk was born in the Ottoman Empire of which Thessaloniki was a crucial part. However, it didn’t end there. When the First and Second Balkan War broke out in the same year, Greece decided to declare war on the Ottoman Empire in order to expand its borders. As a result, it gained Epirus, Macedonia, Crete and the North Aegean Islands from the Ottomans (and Thrace from Bulgaria). Then, in 1919-1922 the Greeks invaded Smyrna under the flag of the Greco-Turkish War… and failed. What did happen is a population exchange, deporting the Muslims of Greece to Turkey and the Christian-Orthodox living in Turkey to Greece, even if they had never been there and were definitely not welcome. This severely affected the local demographics and, needless to say, turned the lives of thousands of people entirely upside-down.**


* The Greek Consulate during the times of Ottoman Thessaloniki served as the center of operation for the Greek guerrillas. Nowadays, it is the Museum of the Macedonian Struggle. Ottoman monuments include the Bey, Yeni, Paşa and Yahudi Hammam, as well as a wide selection of mosques.

** This area is the main focal point of the Thessaloniki “Free” Walks tour, which is tip-based. I participated in that tour as well, but wouldn’t necessarily recommend it. Even though I liked the personality of the guide and his musical contribution of some traditional live Rebete-music, he speaks soooo damn slow and has an issue with getting to the point of his story. He goes on and on about the same topic when everyone already lost interest 10 minutes ago, even though the sights covered in the tour are worth seeing. I recommend exploring on your own instead.
Harbour Area & Contemporary Art Center

Everything I liked about Ano Poli is absent in the Port of Thessaloniki and the waterfront area, which was entirely rebuilt after the Great Thessaloniki Fire. It’s quite sad to realize how superb the place once was, until modern architecture and current humanity f*cked it all up, leaving us to admire history instead of the present. A problem definitely not unique to Thessaloniki or Greece, and one of the many topics addressed in the downright superb Contemporary Art Center, which is paired with the Photography Museum (MOMus). What I liked about this museum is that it goes beyond just a simple exhibition of artefacts and artistic photography… it raises questions, it educates and make your mind wander off to certain social dilemmas underneath. Every corner of this exposition has a new narrative, every single one of them grabbing my undivided attention. The highlight of Thessaloniki for me!

The area is thoroughly re-developed, in an attempt to make it slightly more attractive to visitors. If you follow the waterfront city-inwards you will eventually bump into the White Tower, one of the earlier mentioned UNESCO-monuments. It was constructed as a Byzantine fortification, but repurposed by the Ottomans as a notorious prison where numerous mass executions were carried out. Further down the coast, you can also trace down a couple of beaches, including Neoi Epivates, Peraia, Agia Triada, Epanomi Nea Michaniona… all can be reached by local buses, lines 69 / 72.


Talking about museums… The following museums are free the 1st Sunday of the month in Nov-Mar / 6-Mar / 18-Apr / 18-May / last weekend Sept /  28-Oct: Archaeological Museum; War Museum of Thessaloniki; Museum of Byzantine Culture; Roman Agora; Folk and Ethnological Museum (the last 2 minus the 1st Sundays). 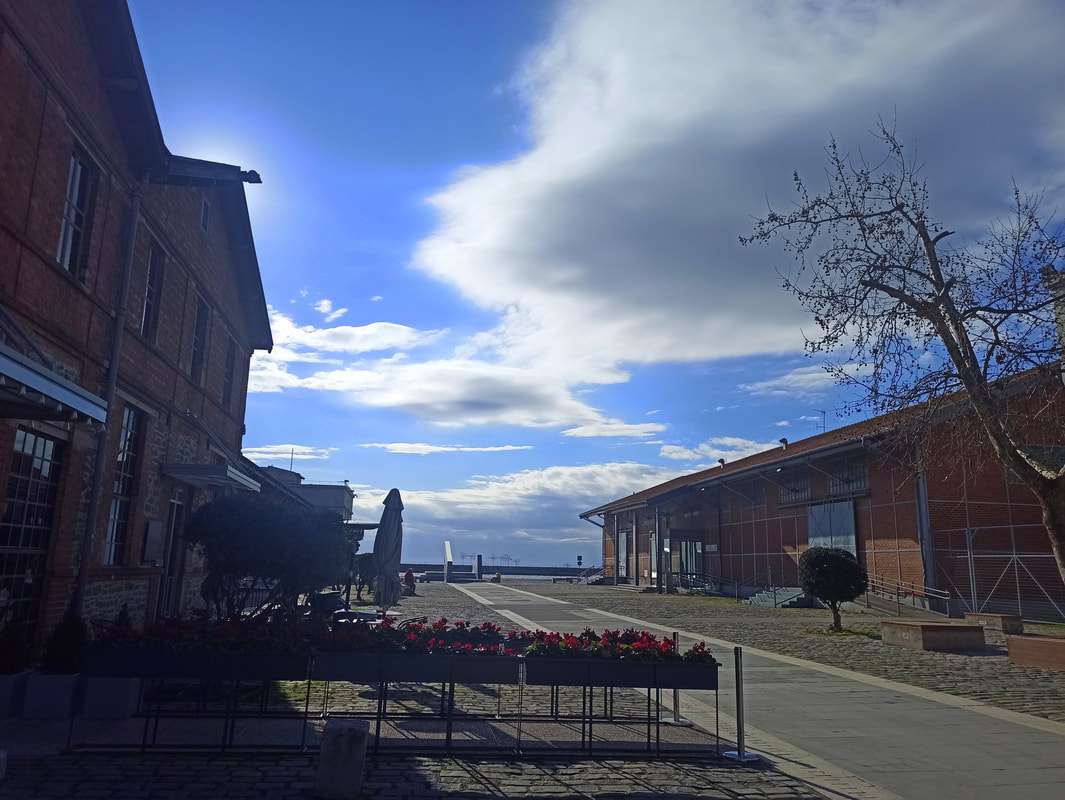 The landmark that most prominently caught my eye was the Arch of Galerius, also named Kamara. This structure, together with the Rotunda, was commissioned by the Roman Emperor Galerius. They form the main elements of the imperial precinct linked to the palace / fortress. It’s an interesting sight to see these in-your-face pillars of history flawlessly adopted into the modern reality of Thessaloniki. Besides that, the area Ladadika, where these monuments are located in, form the vibrant core of the local nightlife: Thessaloniki’s USP, which was unfortunately severely blackballed by that annoying little thing called covid. Thessaloniki’s response was to re-open all establishments, but to forbid any music to be played… Uhuh, so let me get this straight: They are generous enough to allow us to spend the same amount of money on a glass for which we can easily buy a bottle to drink at home, whilst still hanging out among crowds spreading covid to one another, but they’ll take away the only reason why people go out to begin with: enjoy and dance to music with their friends. Big sarcastic thumbs up Thessaloniki!

Luckily, our Couchsurfing hosts Stavroula and Anil, experts of the night, went out of their way to let us taste a bit of the midnight adventures to be had in this otherwise vibrant city. Be it in a silent bar in Ladadika, filled up with Stavroula’s laughter and anecdotes, or at a home hang-out easily transformed into a spontaneous house party bristling with new friends-for-the-night. In the end it’s exactly these experiences, over any UNESCO listing or world-class monument, that add flavour to a place… attaches it to certain emotions and memories you once had there. I might not have felt the strongest connection with the city itself, but I was patient enough to let the beauty in.
Quick Budget Fact Overview 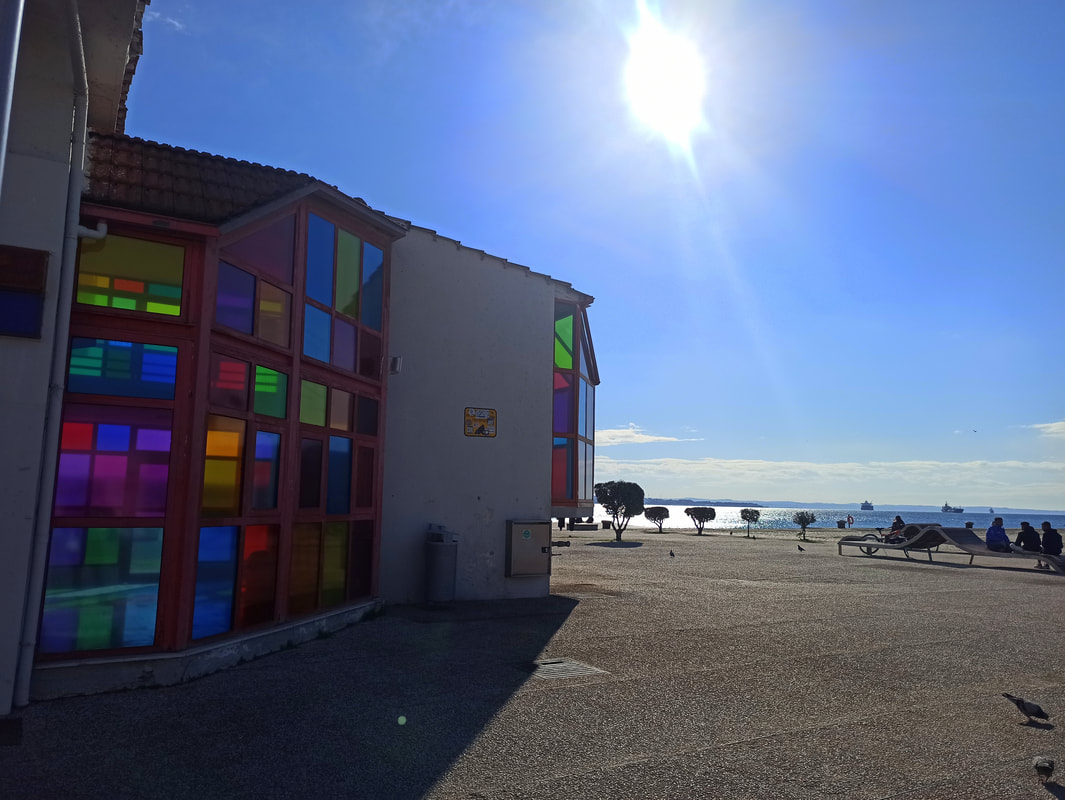 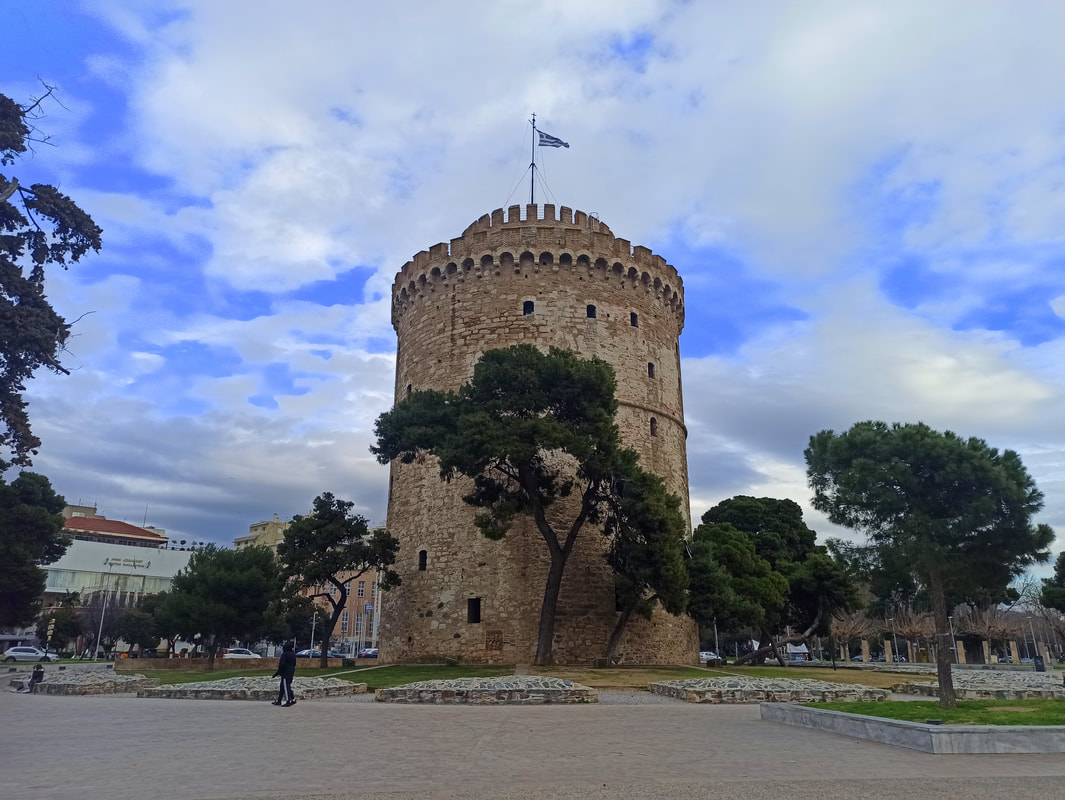 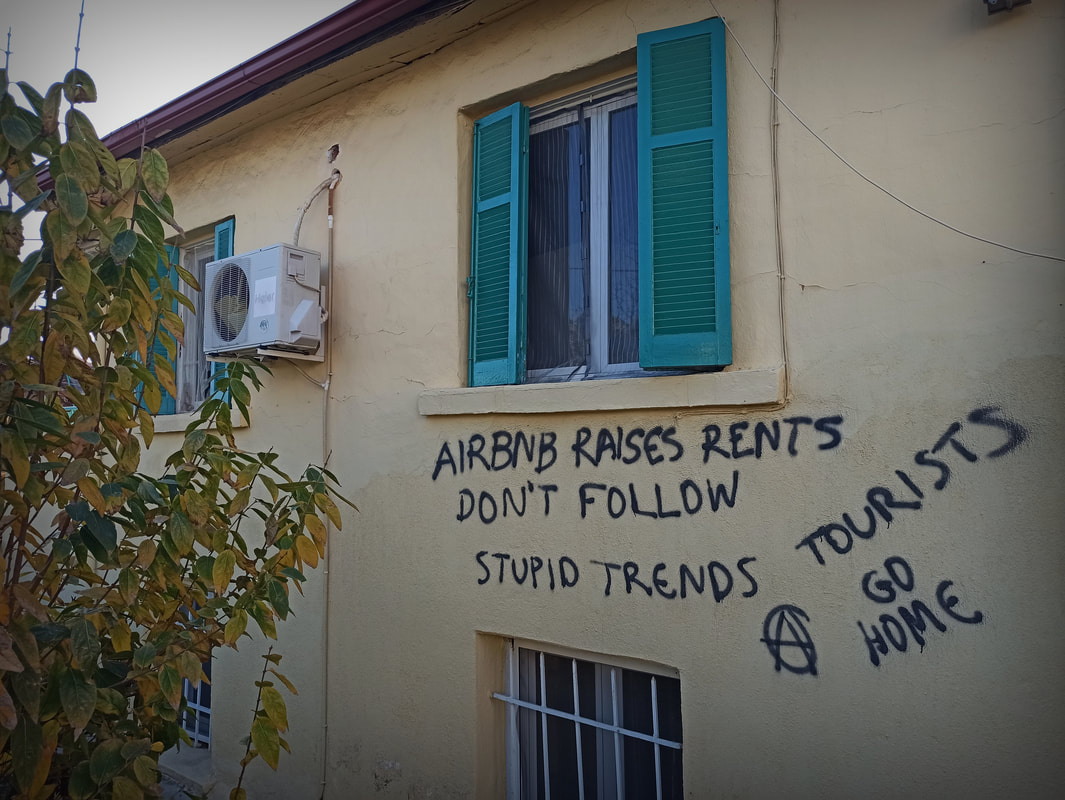