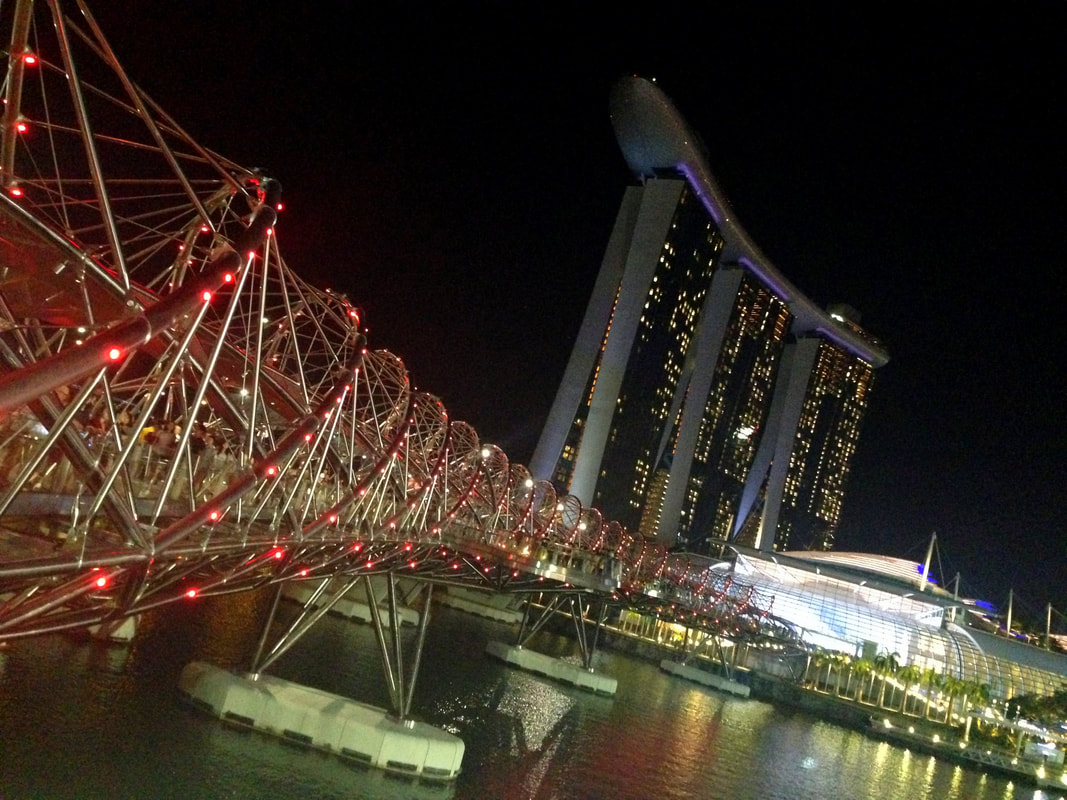 It’s interesting how a good memory I treasured for seven years can be wiped away in one singular day.

It was my first experience with Asia back then. I was curious, excited to uncover all those delicate treasures I studied since childhood on every scrap of travel magazine I could lay my hands on. True, Singapore is more a business city, skyscrapers overwriting its authentic origins, but it was all I had back then so I dove into it with child-like curiosity and excitement. The experience was good I guess.

But then again, I’m a white western woman. Yes, I feel ridiculous writing that down even, as what does my skin colour, origin or gender matter? Sadly, it does in Singapore.
Looking back
​
Dark clouds dominated the trip from the very beginning, when the journey kicked off in Malaysia. After a tropical week on a bounty island my travel companion and I decided to head down to Singapore, making a pit stop in the last Malaysian city before the border: Johor Bahru. From the looks of it I reckoned it was kind of a boring business city, man-made. But at least hotels and eateries would be around the corner, right? Right. Upon check-in the receptionist glanced at his passport with a look of full disdain. She didn’t know if she could check us in. But money = money, so her manager made her... however, her attitude persisted.

​
[For the record, this part of the world is less modern and advanced than mine or his country, which is totally fine by us, we wouldn’t think less of anyone because of it... however, here unlike in the rest of Malaysia they apparently need some countries to look down on... must be the proximity to its neighbour Singapore.] 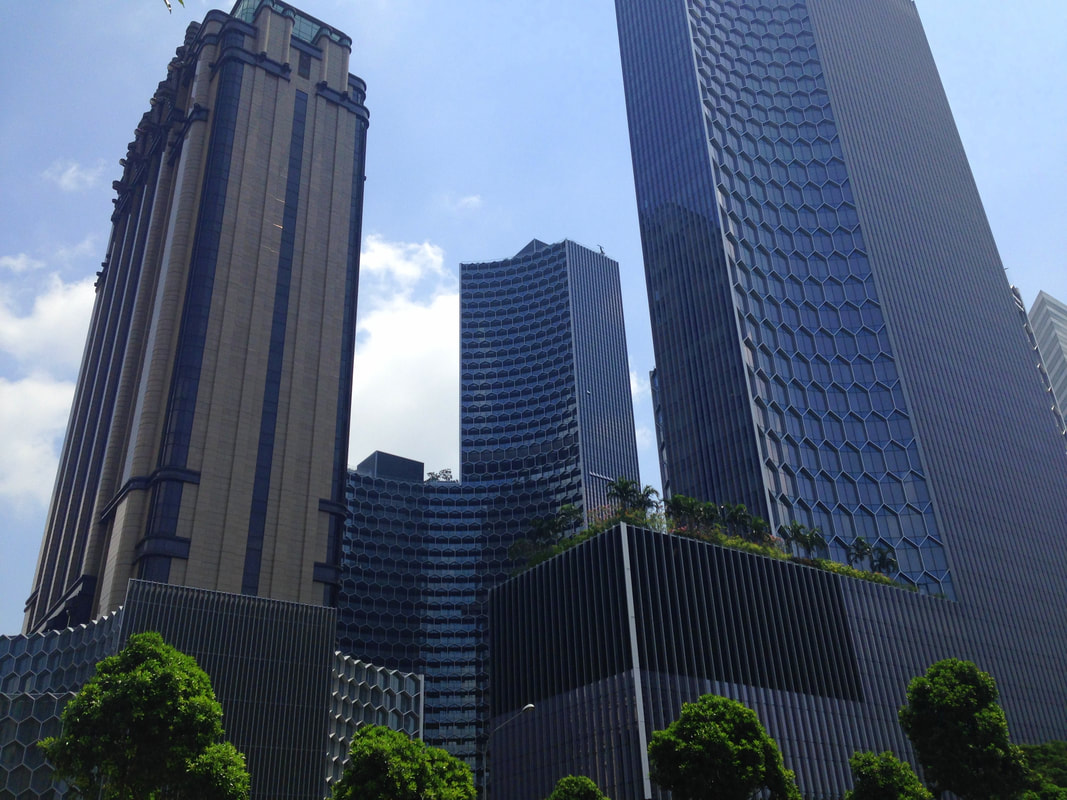 When we left the hotel I felt like I was thrown into the lions. Hundreds of eyes stared at me, not even blinking when I stared back. Indian and Bangladeshi men followed me, bending over to check out my ass from a better angle. I wouldn’t say this has anything to do with love for women, more with their lack of respect for them. To demonstrate this: The next day I wanted to order Indian roti for lunch. After being entirely ignored for 20 minutes I kindly verified if my order was being processed.

Upon that the man grabbed my food, destroyed it with his dirty hands and mingled it into a ball, after which he spat on it. Then he pushed it into my direction with a bit of sauce on the side.

I looked him into the eyes for a few seconds too long, turned around and cut all ties with him and this situation at the spot. Bullies want an audience, they want a scene, they want to witness the pain they cause. Because I didn’t give him this satisfaction he followed me, looking for confrontation, only backing off when he saw I wasn’t alone.


In the meantime we had to fight off a group of robbers who were pulling our bags and trying to rip them away from us. In a shopping mall. At broad daylight. Johor Bahru for you.

We were never more glad to leave a place. However, it was about to get a tad worse. The border to Singapore was awaiting us and there, I can guarantee you, you are not welcome if you’re not entirely white, western or Chinese. I could enter immediately, zero objections. Even though my country The Netherlands has that thing legalized they have the death sentence for: marihuana (we do ‘shrooms too... I tell you an even better story not many people know: We even had a government-related cocaine factory until only a few decades ago, getting our resources exactly from this region: Indonesia, Malaysia and Singapore that wasn’t even a country yet but part of Malaysia back then... until the U.S. ruined all the fun, as they always do.)

My fellow globetrotter, however, was shovelled aside without further explanation. 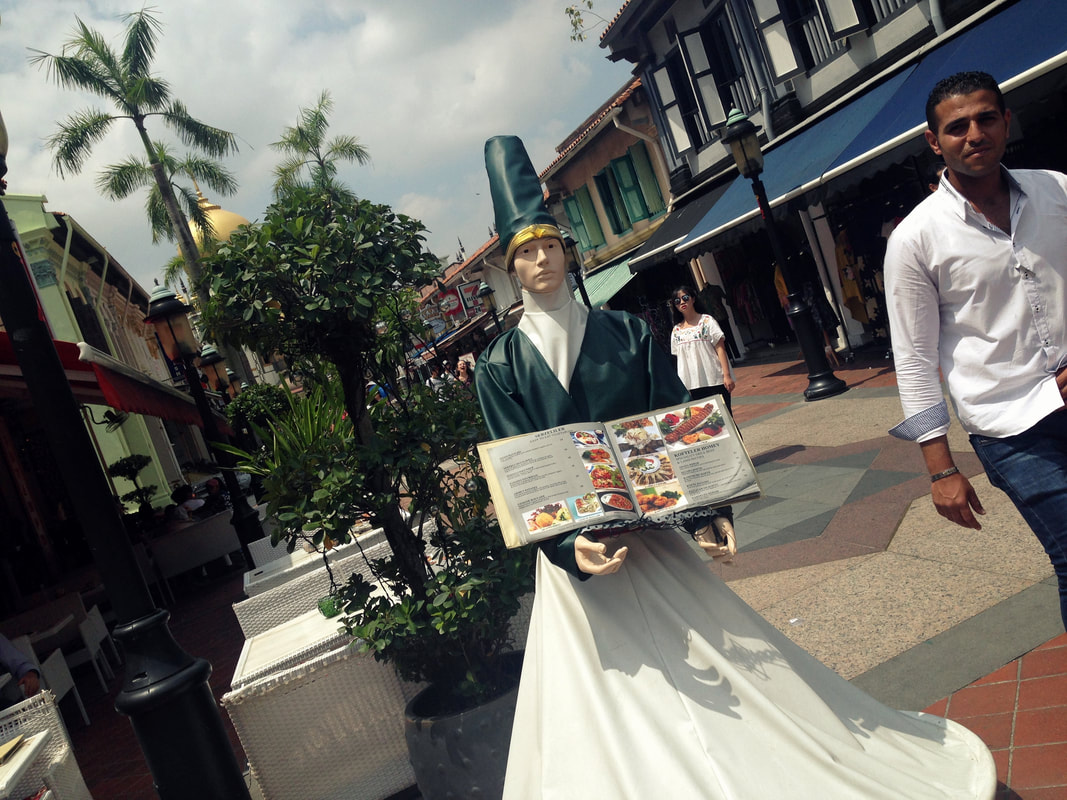 First he had to make six fingerprint-scans for a variety of different databases, then he was taken away for interrogation. Fourteen men and women sat in front of him, intimidating one single man like they were in some Hollywood gangster movie. The fact that he had a visa (approved by the Singaporean immigration office who did a background check already), no criminal record whatsoever and a good job making more in a week than these officers probably do together in a year didn’t make a difference. His crib stood in the wrong country. They kept on asking why he was here, ‘travelling’ being an impossible answer to them. Apparently only first-world citizens have that privilege, not him (check the Singapore immigration website, they literally refer to certain countries as containing ‘second-class citizens’).

He had to proof we were on a holiday, the actual receipts of hotels not being enough. All hotels he stayed at were called and questioned, photos had to be presented and his relationship had to be proofed and double-proofed, because... and I quote... ‘why would a white woman be involved with somebody like him’. 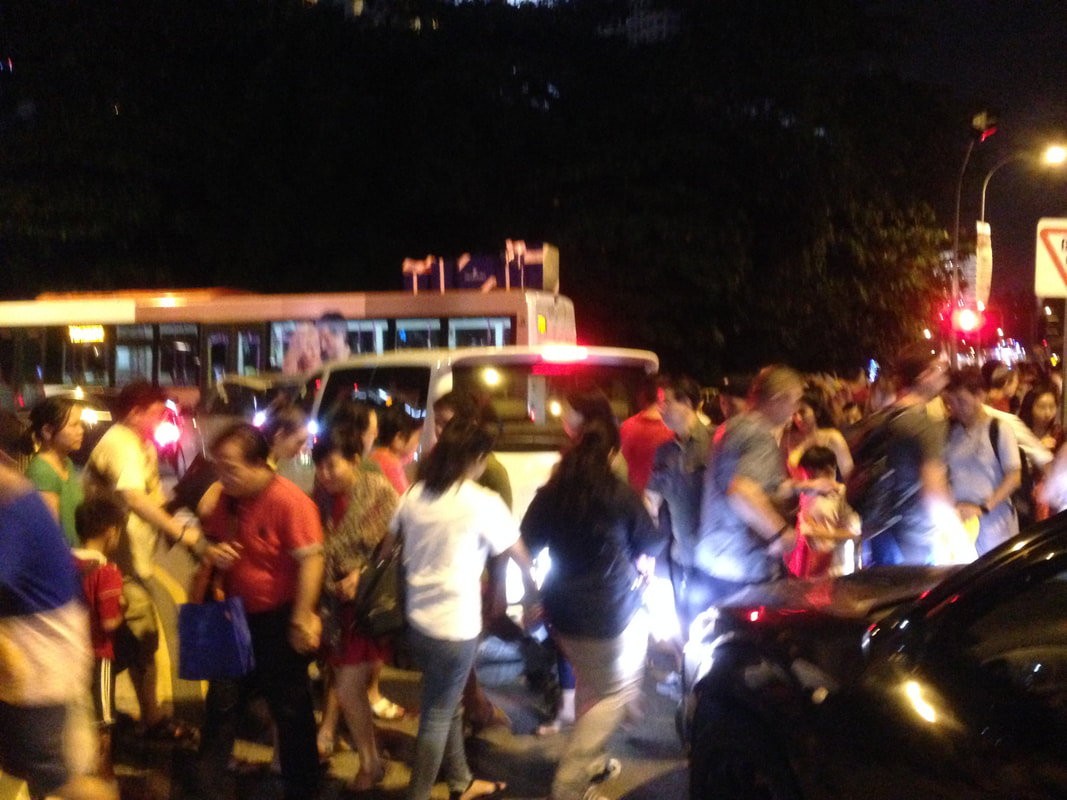 They were going to deport him back to a country he had no ties with. He was simply born there because his dad worked there at the time and then moved along. They weren’t gonna give him a trial or a lawyer and they didn’t even do a background check on him. He was guilty for his nationality. He couldn’t make a phone call or have any contact with me, sitting outside on a dirty floor for hours, worried sick.

​Suddenly a door opened. After 2,5 hours he could go. He was one of the lucky 25% of all people sitting there like criminals. With the request to “please tell people about your pleasant experience in Singapore” he was sent off. 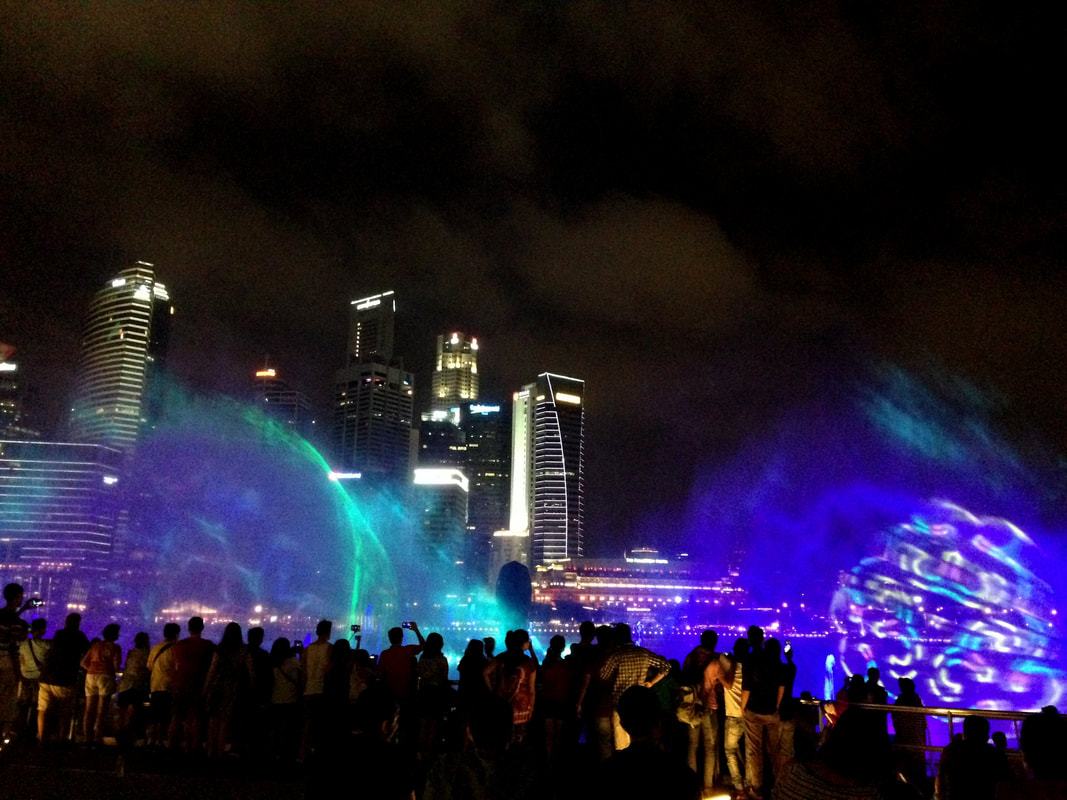 At this point we didn’t want to be in Singapore anymore at all. They didn’t deserve us. I was disgusted. People that are kind to only certain others aren’t kind people to begin with. Even when I mentioned this to locals they said “oh, he’s probably black right.” No he isn’t, but that shouldn’t even matter. I shouldn’t even have to write that down.
​
I was shocked how many locals defended this policy, saying they have the right to further investigation. Yes!!! Please investigate, Singapore! Because that’s exactly what you guys are not doing: You judge on someone’s nationality and hold on to that judgment even though an overwhelming amount of facts state the opposite.

​The Singapore circus continued. Hotels treated us badly. People didn’t want to sell us a phone card because we are foreigners, and “there are too many of them”. Well, what do they think they are then? They’re Chinese and Indian. They weren’t even a country until not so long ago when they separated from Malaysia. Borders should be futile to them as they are in nature.
​
We did some nice things, fair enough. To get our mind off things we wandered along the marina. Participated in some Chinese New Year activities, as we do treasure a certain curiosity to other cultures. We visited the funfair and witnessed the Spectrum water- and lightshow.
But it was ruined. This can’t be undone. I have been travelling in every single continent and visited 52 countries so far, but only now I realize what that means if you’re not privileged enough to have ‘the right passport’. I decided to leave and never return again.
​
​
In order to support the travelers’ community, I spend many hours per week to adequately document all information and advices for prospective visitors, accompanied by a (hopefully) entertaining insight into my personal observations and experiences. This service is and will remain free. However, if you voluntarily want to make a contribution and support my travels and thus the creation of new stories and information supply, here is the button you’re looking for:
Donate
Related:
- The most dangerous border crossing of South America
- A border crossing from hell: Honduras
- Corruption at the border of Colombia
- The concrete capital of Malaysia: Kuala Lumpur
​- 10 things you can't do in the non-touristy part of Morocco
​- Visit Europe's mini-countries: Gibraltar, Liechtenstein, Luxemburg, Kosovo & Wales!
- Make a Malaysia roundtrip: Kuala Lumpur, the Cameron Highlands, Ipoh, Taman Negara, Penang, Tioman Island, Kuching, Melaka, Miri, and Sabah!
​​- Visiting the tiny sultanate of Brunei
​- Travel Asia off the grid… discover the magic of South Korea!
​​- 13 Strange Observations of South Korea
​- A little sneak-peek into North Korea!
​- Jordan, a destination on the rise: Extensive guides to Petra, Amman and Wadi Rum
- The worse place to go to in Mexico: Cancún
- When traveling goes terribly wrong: Gibraltar
- Where you shouldn't go to for holidays: Kaunas, Lithuania
- Digital Danger
​- Dear mama...
- Having my passport stolen in Argentina...
- ... and again in Brazil a week later
​​- Comfortable with the uncomfortable? Bohol & Panglao Island, The Philippines
​- 8 ways to save money in Vienna, Austria