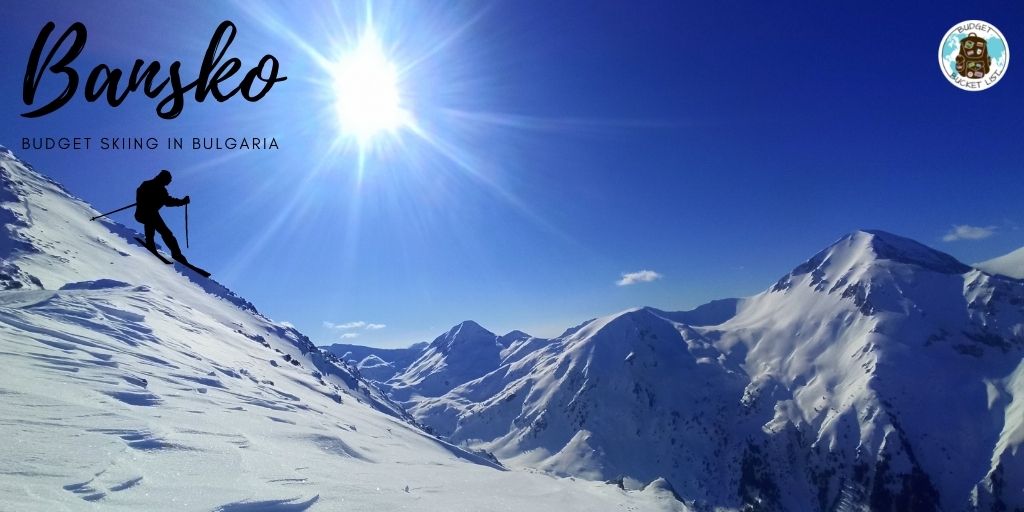 Not in the story-mood? Scroll down for the Quick Budget Fact Overview: an itemized information summary of Bansko! ↓
Skiing is by no means a budget activity. Yet, there are ways to splurge and ways to keep your expenses in check. The first step in organizing an affordable skiing holiday is selecting the destination. Not everyone is aware of it, but Eastern Europe hosts a wide variety of interesting ski locations. Let’s have a look at Bulgaria, for example: A country that offers no less than 20 ski resorts. The most popular one? Bansko! Not only because it’s the country’s biggest with an impressive 75km of perfectly groomed ski runs, but also due to the pleasant combination of a vibrant fine-dining scene and an ever-popping local nightlife… for Bulgarian prices!

Properly in budget-style I hitchhiked, my thumb bringing me all the way from southern Dospat to downtown Bansko. I expected a modern, soulless and purely functional place, merely designed to serve the needs of the snow-loving crowds… but instead, I found a surprisingly scenic and picturesque town with a cheerful hustle and bustle filling the swirling alleys. Even if I wouldn’t be here for skiing or hiking, I wouldn’t mind spending the day here, simply unwinding and absorbing the local ambiance. Yet, I couldn’t control my gaze continuously drifting off to the intimidating yet inviting peaks of the Pirin National Park. A park that has been on my bucket list for years now… Renowned for Europe’s most southern glaciers and 118 glacial lakes, thick forests*, high ridges, steep slopes and a colorful variety of animal life (including wildcats, brown bears and gray wolfs). A display of nature so incredibly pristine, it has been recognized as a UNESCO World Heritage site! To think you can actually descend the thrilling slopes of such a prominent landscape is a travel privilege almost to good to be true. Almost.


* Bulgaria's oldest tree, the Baikushev's pine, is located within Pirin National Park. It’s about 1300-1350 years old and as such “witnessed” the foundation of the Bulgarian state in 681 AD. 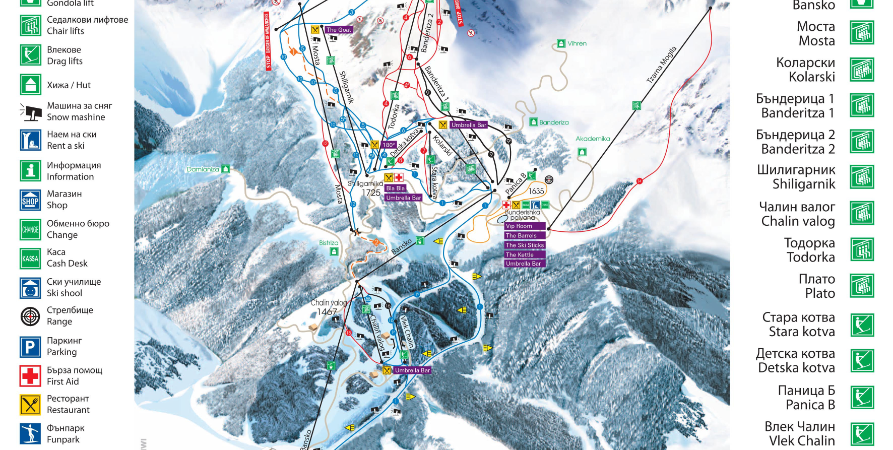 
From beginning to end, my entire clear and sunny day at the Bansko Ski Resort was simply delightful. Normally, I properly dislike the awkward prep-process of grasping all my rental gear together, waiting around in loud lines while sweatily chucking my feet in stiff ski shoes that are all equally uncomfortable in their own special way. In Bansko's main ski center next to the gondola it took the professional staff about 5 minutes to put together a professional set. Rental ski clothing I could easily and cheaply rent in one of the many rental shops dotting the main road. A great solution for those who like to travel light! The modern gondola (comparable to those you’ll find in the Swiss / French / Austrian Alps) brings you straight up to the main skiing arena, where a wide variety of chairlifts drop you off on top of your favorite slopes. It surprised me that I never experienced waiting times exceeding a minute or two, while I visited on a rather busy day.

The slopes can be divided into 35% suitable for beginners, 40% for intermediates and 25% targeted to advanced skiers and snowboarders. It was good to notice the beginners having plenty of terrain to better their moves. At the same time, because Bansko is so attractive for beginners and intermediate skiers, the advanced crowd also reaps the fruits: The black and borderline-red slopes were basically private domains! And I’m not talking about just any random collection of black slopes… the Alpine Ski World Cup and Snowboarding World Cup were hosted here! How’s that for a warm-up? Freely flying down the steep drop-offs until the mere speed drew the tears out of my eyes, without anyone in the way altering my trail… it’s a special kind of magic. Bansko caters to all!
Whereas black and shaded slopes often get rather icy and annoyingly slippery, I noticed this wasn’t the case anywhere in Bansko. Later I learned that this was the work of a 24/7 grooming practice, continuously guaranteeing soft and smooth slopes to its users all day through. This, to my great relief, also prohibited the formation of bulky snow-bumps at the end of the day. Another big pro is the ski road pleasantly leading all the way back down into town when the day is done, like a kind consolation price after the last lift unfortunately closed its doors. That doesn't mean the fun is over though… the second you click off your gear the banging beats of the ‘Happy End’ apres-ski bar welcomes you right back into the valley.

A happy end indeed, bring on the mulled wine!
Did you know that with a Bansko Season Card, you can ski 3 days free of charge in Verbier, Switzerland? Nice extra if you’re here for the long haul!

I was very surprised with the affordable accommodation rates in Bansko, unlike Borovets, Bulgaria’s second largest ski resort. The sheer amount of hotels and guesthouses seem to keep the prices down. I paid only €16 a night for a very comfortable and clean private room (Guest Rooms Bansko).

I by all means recommend sampling the delicious Bulgarian cuisine, but keep in mind that the main street of Bansko might not be the place for it if you want to keep the costs down. Wander further down the backstreets to find spots such as Grandmother Vuna or Fast Food in Pirin St. where you can fill your plate with straightforward traditional food for just a couple of euros. Otherwise, the Billa supermarket serves warm ready-made food and allows for self-catering (stick to their home brand Clever for extra low prices). If you travel with a vehicle, there’s also a Lidl just outside of town. I always bring lunch to the slopes for further savings.

You can book quite affordable shuttle services between Bansko and Sofia / Sofia Airport. Otherwise, there are rather frequent bus services and even an (infrequent) train service connecting to Sofia via Velingrad [more info below in the Fact Overview]. Hitchhiking is recommended in pairs, with at least 1 man… unfortunately.


Bansko in Summer / Spring: Find an overview of amazing hikes in Pirin National Park departing from Bansko in this overview. Other popular summer sports include mountain biking.

Rila Monastery
​
Like one national park isn’t enough… the second you leave Pirin National Park, you basically hike straight into Rila National Park. Unlike Pirin, not a UNESCO World Heritage site on its own, but containing one… the marvellous Rila Monastery. The compound is named after Ivan of Rila (876 – 946 AD), who lived in a cave devoid of any material possessions. His students, who travelled to the mountains to receive his education, erected the building that grew out to be the largest and most renowned Eastern Orthodox monastery in Bulgaria. Even though it was raided and destroyed during a sequence of Ottoman invasions, the complex was relentlessly rebuilt in the end of the 15th century thanks to the financial help of Sultana Mara Branković. Currently the monastery is regarded as the most significant cultural, historical and architectural monument of the country, and it even appears on the 1999 1-lev banknote.
Despite its remote location, I truly vouch for a visit. Both the sublime natural location at a 1147m elevation and the architectural value are a feast for the eye… a proper wow-moment upon entry. And if a round-trip is too time-consuming, there’s always the option to spend the night! Yes, really. You can actually sleep in this UNESCO World Heritage site, paying a nightly fee.* This is especially interesting if you intend to challenge yourself with the famous Lakes Hike, which takes an estimated 7 hours to complete. In winter, however, this can only be done with professional gear and potentially a mountain guide.


* As the accommodation price seems to be increasing yearly and no blog I read mentioned accurate prices, I refrain from quoting exact rates. Expect to pay around €20’s worth per person per night.

** Bring food, as there’s nothing there. Other articles mentioned an on-site bakery and adjacent overpriced restaurant , but even those were closed in winter.

*** The Rila Monastery doesn’t charge an entry fee. However, the museum costs 8 lev, per 2022. It hosts a modest collection of artefacts, including the Rafail’s cross. This artwork was made from a whole piece of wood and depicts 104 religious scenes and 650 miniature figures, using magnifying glasses. It took monk Rafail 12 years to complete it… after which he lost his eyesight.

**** The logistics: Technically the Rila Monastery is really close to Bansko… but don’t forget we’re in the mountains! You have to loop aaaaaaall the way around them to reach it. You can either drive, hitchhike (in pairs) or book a tour to reach this UNESCO highlight. From the monastery, there are technically 2 buses a day back to Sofia, in the morning and afternoon… but sometimes they get cancelled (as confirmed by the nuns), and in my case it only brought me to Dupnica for whatever reason, from where I had to wait 2,5 hours for the next train. Find info on the Rila Express here, although it seems to be temporarily suspended.

There’s not a whole lot going on in Dospat, hidden behind the Rodope Mountains just north of the Greek border. And that’s exactly what attracted ‘Uncle Pete’, my good old travel friend who I met somewhere in between the ancient Mayan ruins of Guatemala. It took me 3 separate hitchhikes through a snowstorm to get in, and 3 to get out again… but it was worth the serenity of a village where everyone knows everyone, and the news of a foreigner making an appearance spreads like a wildfire. The town is a great, remote base for hiking and you can pop by the Dospat Dam, which is Bulgaria’s highest.*


* Oh, and if you ever by some twisted turn of events happen to visit the South Shetland Islands of Antarctica… have a peek at Dospat Peak, which is somehow named after this place.

There are several natural thermal baths surrounding the Bansko area, located in neighbouring villages. You can relax the muscles after a long day of skiing in the pools of Banya, Ognyanovo and Dobrinishte... of course, free of charge!
Photos by Miles Watson Photography.
Quick Budget Fact Overview 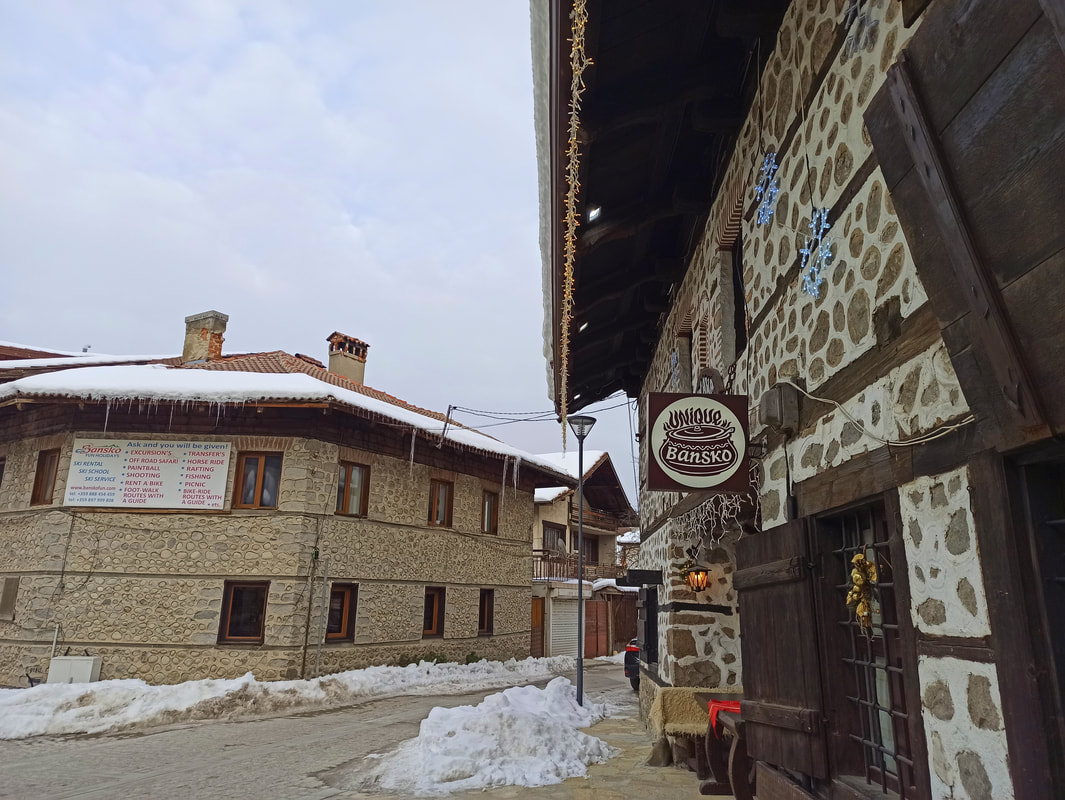 You can order your Lonely Planet here. 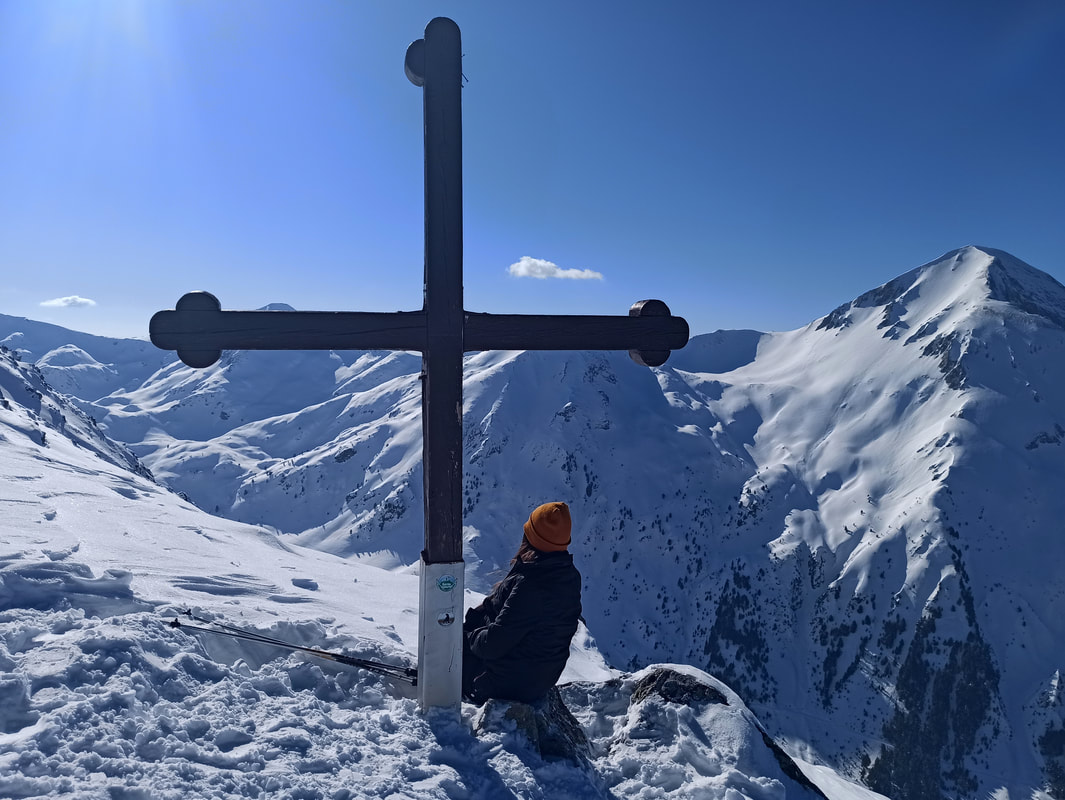 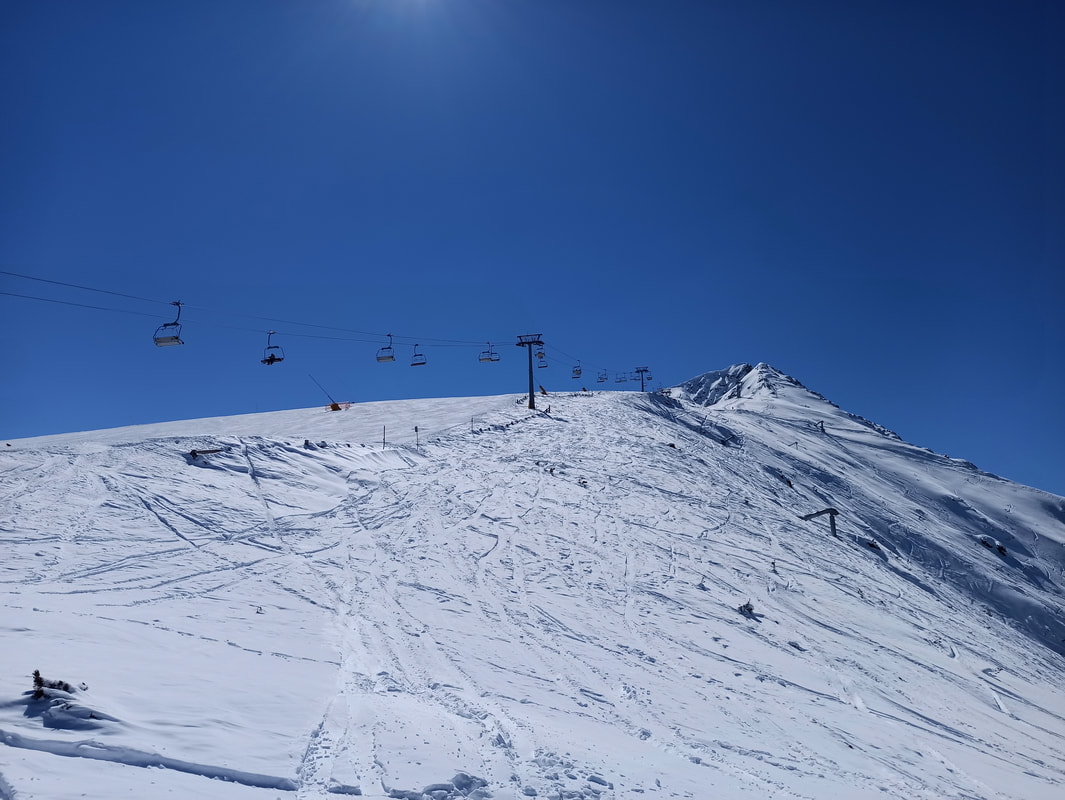 Transport
Next?
In order to support the travelers’ community, I spend many hours per week to adequately document all information and advices for prospective visitors, accompanied by a (hopefully) entertaining insight into my personal observations and experiences. This service is and will remain free. However, if you voluntarily want to make a contribution and support my travels and thus the creation of new stories and information supply, here is the button you’re looking for:
Donate
Related:
- Be about Bulgaria: Check off Belogradchik, Plovdiv, Sofia and of course Veliko Tarnovo!
​​- Skiing on a budget: Romania's top ski resorts!
​- Romania's Winter Wonder Land: Sinaia & the Sibiu Region (and sleep in an igloo!)
​- Europe's best skiing & hiking: Get your ass over to jaw-dropping Switzerland!
​​- Check out Budget Bucket List's FAVORITE HIKING DESTINATIONS worldwide!
- Visit Balkan's finest: Montenegro's National Parks Blog, Kotor Bay & Lovcen NP and Cetinje, Podgorica, Prokletije NP and Montenegro's Coastal Towns Blog
- 10 typical Dutch celebrations no traveller should miss out on
​​- History preserved: Time capsule of Romanian culture Maramures
​- Get your Albania itinerary ready: Berat, Gjirokastër, Korcë / Ohrid Lake, Theth, Shkodër, Tirana, Mount Korab & the coast!
- The 3 golden rules to travel Sofia on a budget! & Why you shouldn’t miss out on Plovdiv! [Bulgaria]
- Where modern meets classic: Vilnius, Lithuania
​- 8 ways to save money in Vienna, Austria
​​- German gems: Aachen & Frankfurt am Main
​- Europe's best skiing & hiking: Get your ass over to jaw-dropping Switzerland!
​- Budget Bucket List hitchhike trip to... Kosovo!
- Unravel the mysteries of Serbia
​​- Discover the splendours of Turkey: Istanbul on a Budget & Reasons to visit Edirne