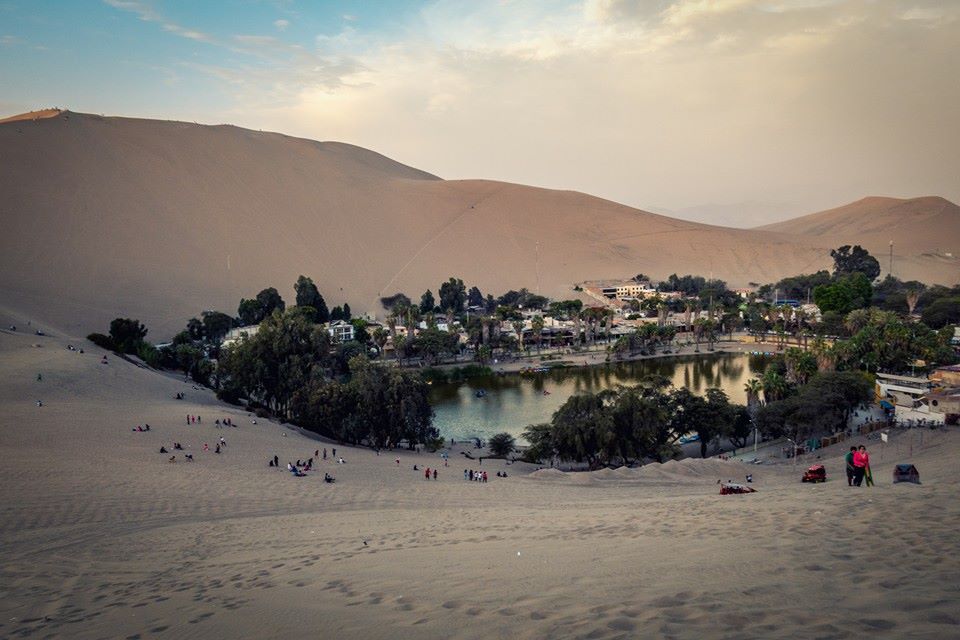 As Aladdin always has been my favourite Disney movie, the Google Images results of Huacachina triggered my imagination and easily convinced me. It wasn’t quite the flying carpet that got me there, although my mental bus driver did make the bus fly over the notoriously dangerous Peruvian roads more than once. Of course I went with the cheap local rattle-bus without air-conditioning but with missionaries reading out loud from the bible for hours, as I am convinced that suffering is inseparable from travelling and a significant part of an enjoyable experience. Yes, I’m a peculiar girl.
​
The views made me feel like we drove on a boiling hot moon, our bus meanwhile crushing some of the numerous immense condors flying over. 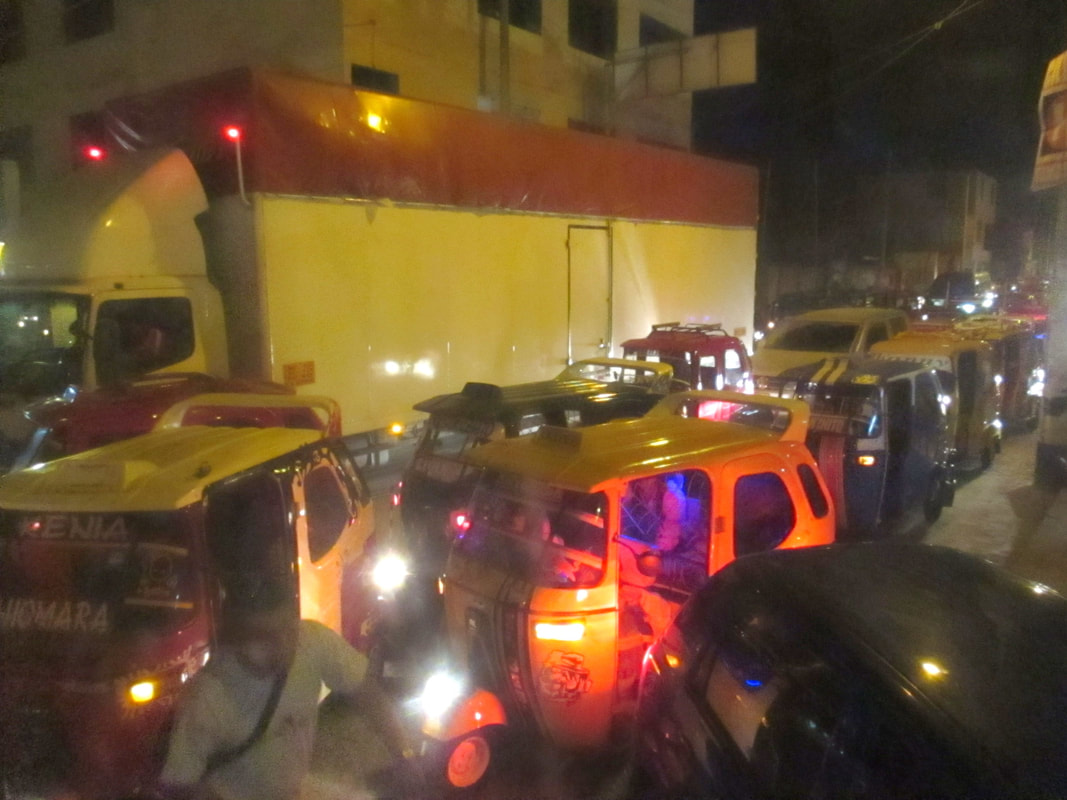 ​Upon my arrival the first thing I did was jumping into the swimming pool of my shabby hostel, as I was quite overheated. 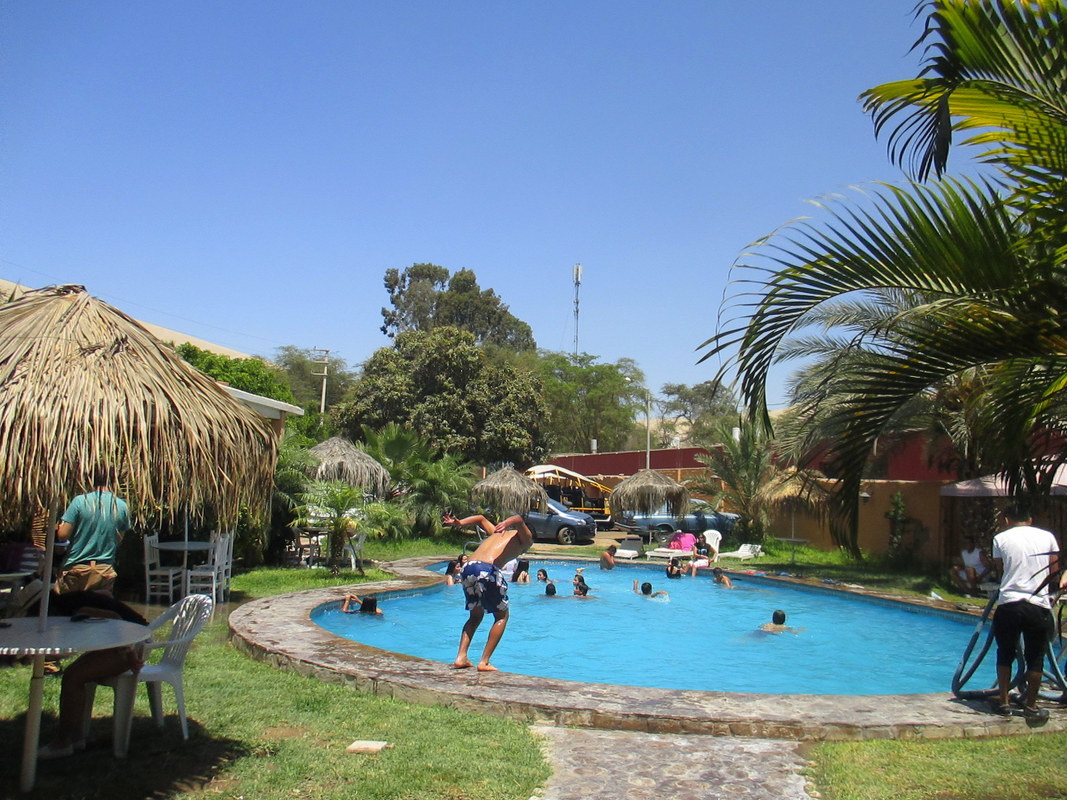 I thought me and the Frenchies I met on the spot deserved some alcoholic consolation after enduring this bus ride… and as this place was mentioned as a ‘backpacker party hub’ this shouldn’t be any problem right?
​
Hm, not sure where these wild party people were hiding, but we couldn’t track them down. The bars we entered excitingly advertised on cocktails, but they forgot to buy the ingredients to actually make them. Disillusioned we ended up quietly sipping some Pisco Sour at a bar called Huacafuckingchina. Classy. 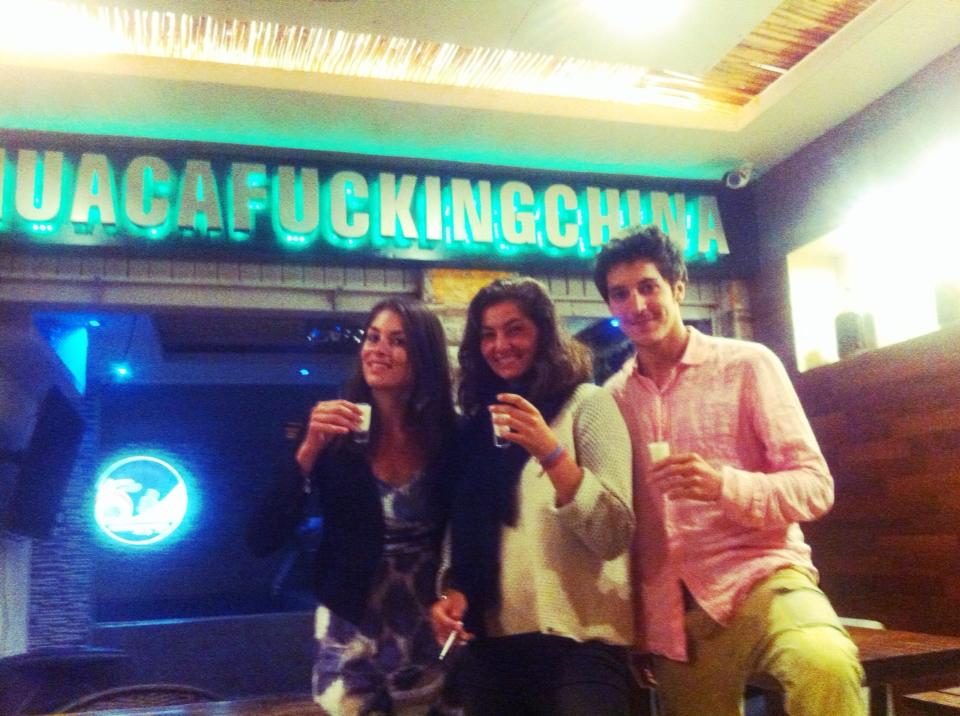 Looking around at this oasis, which appeared to be artificial, an uncomfortable feeling took over.

Apparently Huacachina was pumped out of the ground for the wealthy jetset some time ago, but I felt once they disappeared the place run down completely and became quite tacky. It looked a bit sad, the lonely local cougars walking around the street looking for young male backpackers to shag and loud music pumping out of empty bars. 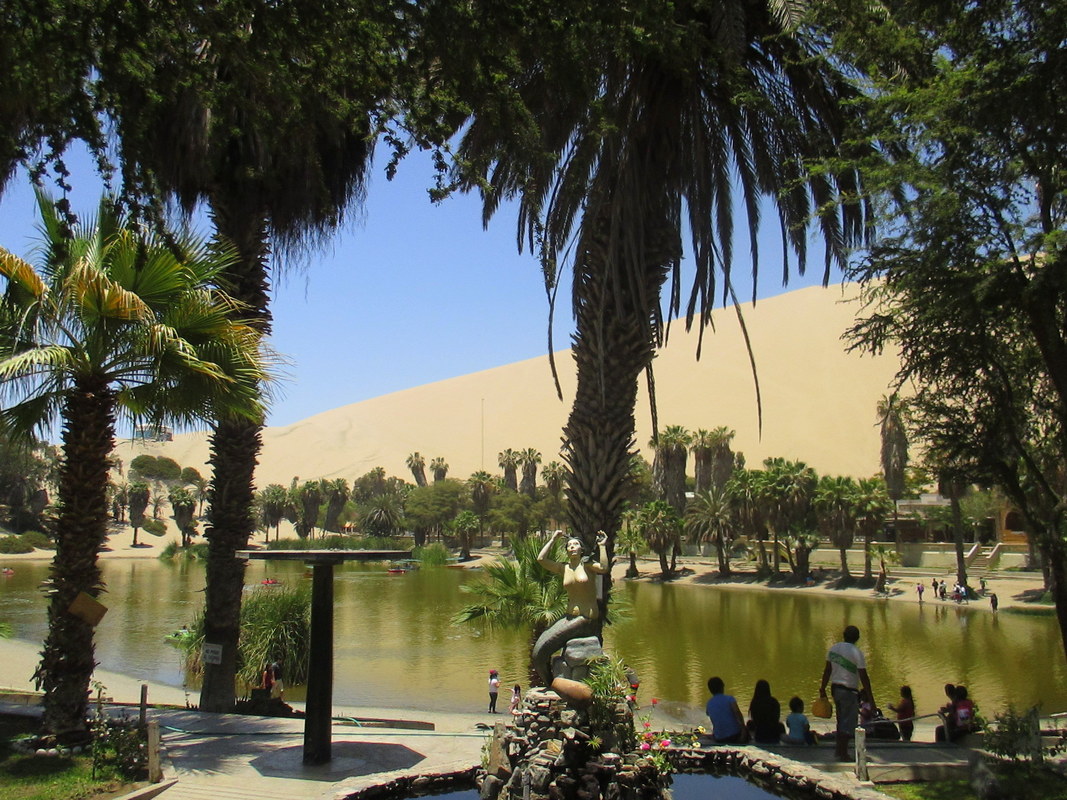 ​The bus loads of giggling school classes and overweight Asian people (yes they exist) who invaded Huacachina the morning after didn’t encourage me to fall in love with the place either. So after an overpriced breakfast I tried to get out of this ‘oasis’ and climb the sand dunes for some world class views. The emphasis on ‘tried’. I gave away quite an entertaining show instead while trying to run over the sand as hot as coals, letting go some intense shrieks. Why the hell would people want to try the sand boarding, I pondered... unless they're super excited about contracting some second degree burning wounds. 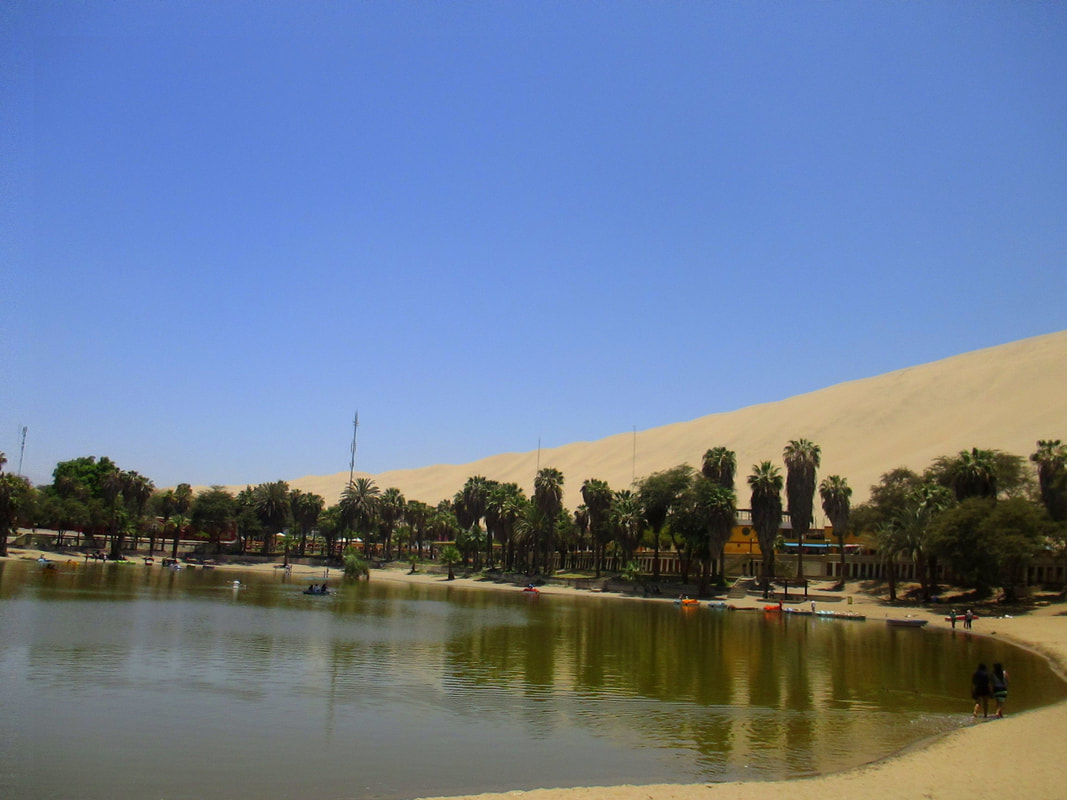 I did sand boarding often enough (Australia / Chile / Brazil), which was enough excuse to prioritize alcohol over physical exercise anyway.

I was located in Peru’s only wine 'hotspot'. This must have been a hint. Why is there only ONE wine city? Because Peruvian wine is beyond gross, that’s why.

Ignorant and still full of hope I booked a wine tasting tour as that worked out cheaper than taking the cab to the wineries in Ica myself. I accepted the humiliation of following a guy with a fluorescent cap holding up an umbrella which said ‘tourists this way’. I travelled through France, Chile, Spain, Australia, Uruguay and most importantly: Italy and Argentina, so my expectations are quite high when it comes to sublime red wine. Peru didn’t meet those expectations. 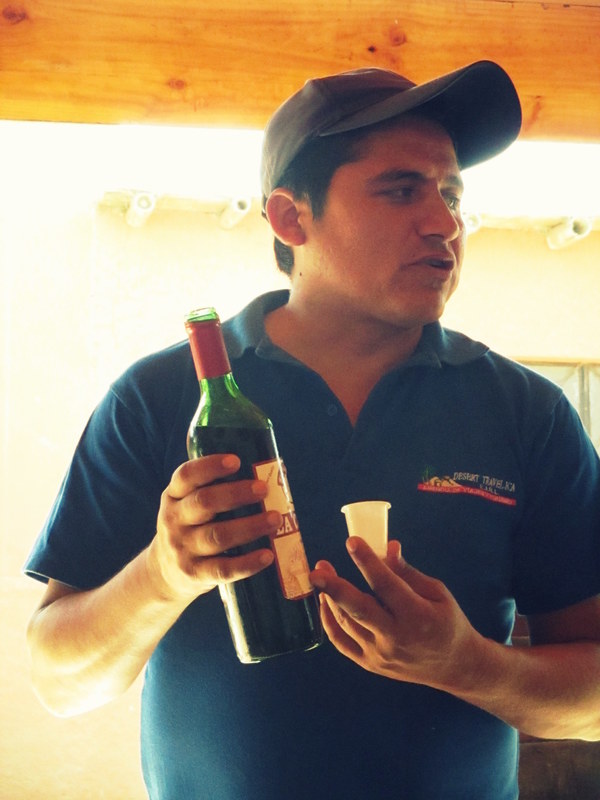 ​It was disappointing enough that the wine tour was a touristy disaster of money-grubbers bringing us to two shops (‘wineries’) right next to each other without showing us any vineyards whatsoever. But the sweet dessert wines tasting like fluid sugar were worse than the Bacardi Breezers I downed when I was 14. Still, you wouldn’t hear me complaining though. I was drinking under a palm tree with 37 degrees while my friends in Holland just had their first freezing night. Ha. 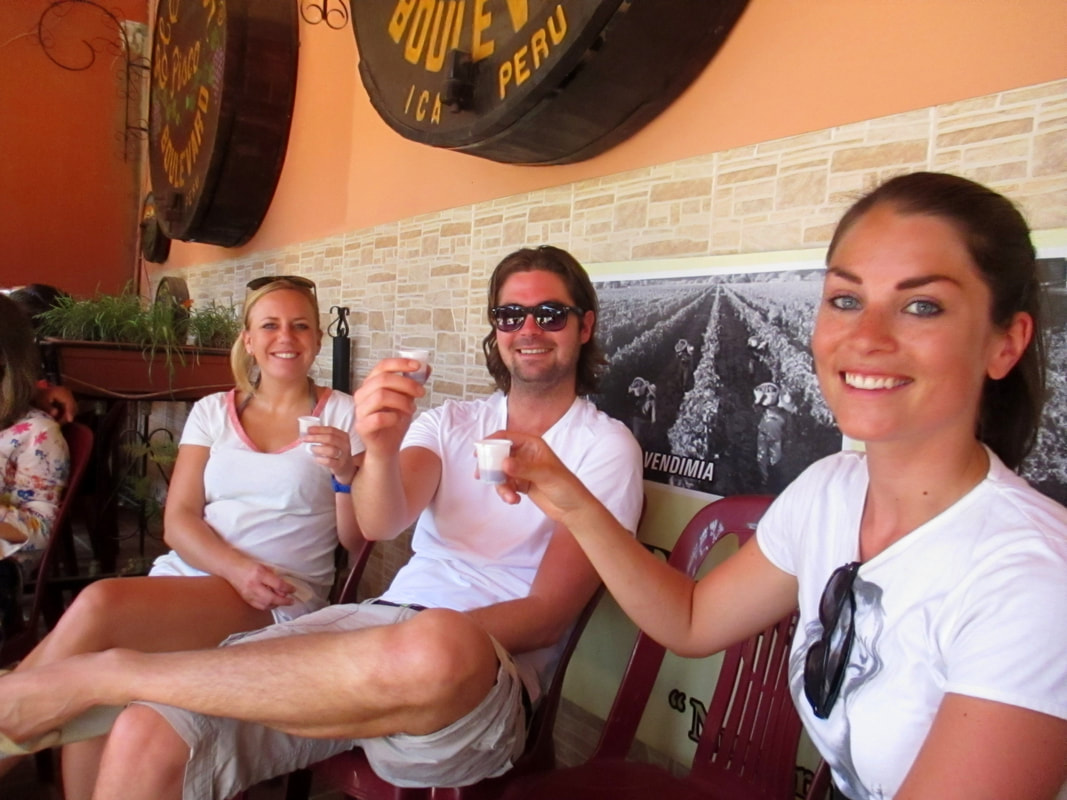 By the way, this is how Huacachina city marketing tries to sell the place to you, decide if you fall for it:

“Huacachina is a desert oasis in Southern Peru, located approximately 5 hours south of Lima. It is a small lagoon surrounded by palm trees and gigantic sand dunes, similar to those seen in the Sahara Desert in Africa (oh fuck off, I went to the Sahara desert, NOT the same). In the 1940’s, the oasis became a popular beauty spa for wealthy Peruvians in Lima: the waters were thought to have healing powers, and many Limenos came to bathe in the waters to soothe and heal their bodies and skin. A number of luxurious hotels were created along the lagoon, along with a boardwalk and streets. However, at some point in the 1950s it fell out of favour, and for decades it was abandoned, and largely considered a place without any touristic appeal [I’d say it never recovered from that!] At some point in the 1990’s however, clever businessmen began to offer tourists the option to explore the gigantic sand dunes in a 4-wheel-drive dune buggy, and travellers quickly realized that this was a rare and enjoyable experience in a country that was already famous for providing mountains, jungles, and ancient ruins. The sand dunes in the desert around Huacachina are beautiful, sensual, and very photogenic." Right... I'm not buying it.
In order to support the travelers’ community, I spend many hours per week to adequately document all information and advices for prospective visitors, accompanied by a (hopefully) entertaining insight into my personal observations and experiences. This service is and will remain free. However, if you voluntarily want to make a contribution and support my travels and thus the creation of new stories and information supply, here is the button you’re looking for:
Donate
Related:
- Argentinean wine adventures in Mendoza
- More Argentinean wine in Cafayate
- Visiting the Uruguayan wine region: Carmelo
- Terrible Bolivian wine in Tarija
- The city where humanity reached its lowest point: Cancún, Mexico
- A horrendous night in Copiapó, Chile
​- The least exciting place in Colombia: Manizales
- The arsehole of Ecuador: Guayaquil
​- Avoid avoid avoid! San Juan del Sur, Nicaragua
- Where you shouldn't go to for holidays: Kaunas, Lithuania