The insane turbulence during the flight left some bruises, and the moment I left the airplane the ice cold sea wind almost blew me off the stairs (Puta! It’s winter here in August). I entered the arrivals hall and saw some Julio throwing all luggage on one big pile, all travelers attacking it as hungry lions. After I fought for my backpack I asked in my best Spanish (English isn’t anywhere to be found in this continent, I learned soon enough) where I could take a bus. They told me I have to change my money to coins first, so I waited 45 minutes in line at the bank… where they then told me no buses go anymore at this time at night. At this point I didn’t have any sleep for 25 hours. 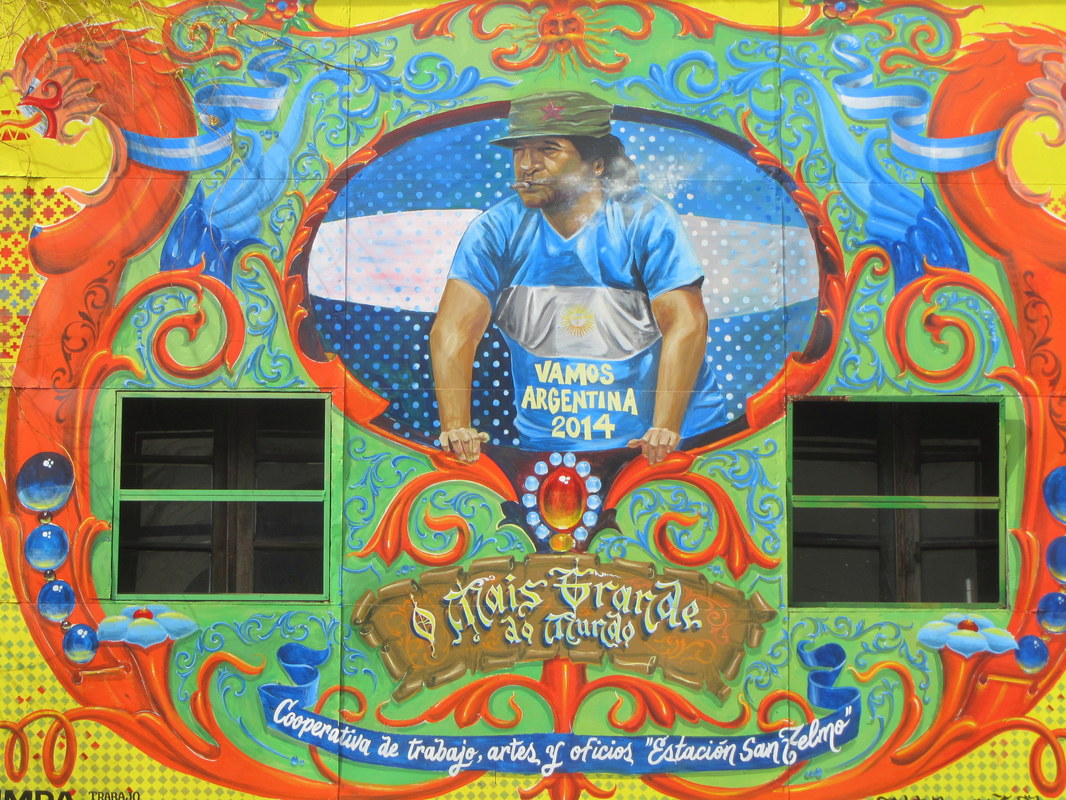 Bzzzzzzt fastforward 48 hours:
​
My nose itches from a sunburn, I am sipping at the best glass of wine I ever tasted, tango music is filling the room, my tango teacher looking like Al Pacino takes my hand and leads my to the dancefloor.

He grabs my chin and says with a sensual accent: “Stephanie, you have to look in the same direction as I do… tango is life, tango is love, and if you look away from me I will never follow you.”
​After a chaotic start, the people of Buenos Aires turned my welcome to South America into a warm one after all. Coming from a pretty individualistic country I was very surprised that every time I was lost, some Argentino immediately put on his/her jacket and walked me to the place where I needed to go. In Amsterdam you can walk around all day, stand in in a metro with 15 people per square meter, but no one will ever talk to each other. Here it’s hard to feel lonely, as every time you sit down some Argentino will join you sharing his views on (sensitive) politics, tango or most importantly: fútbol. 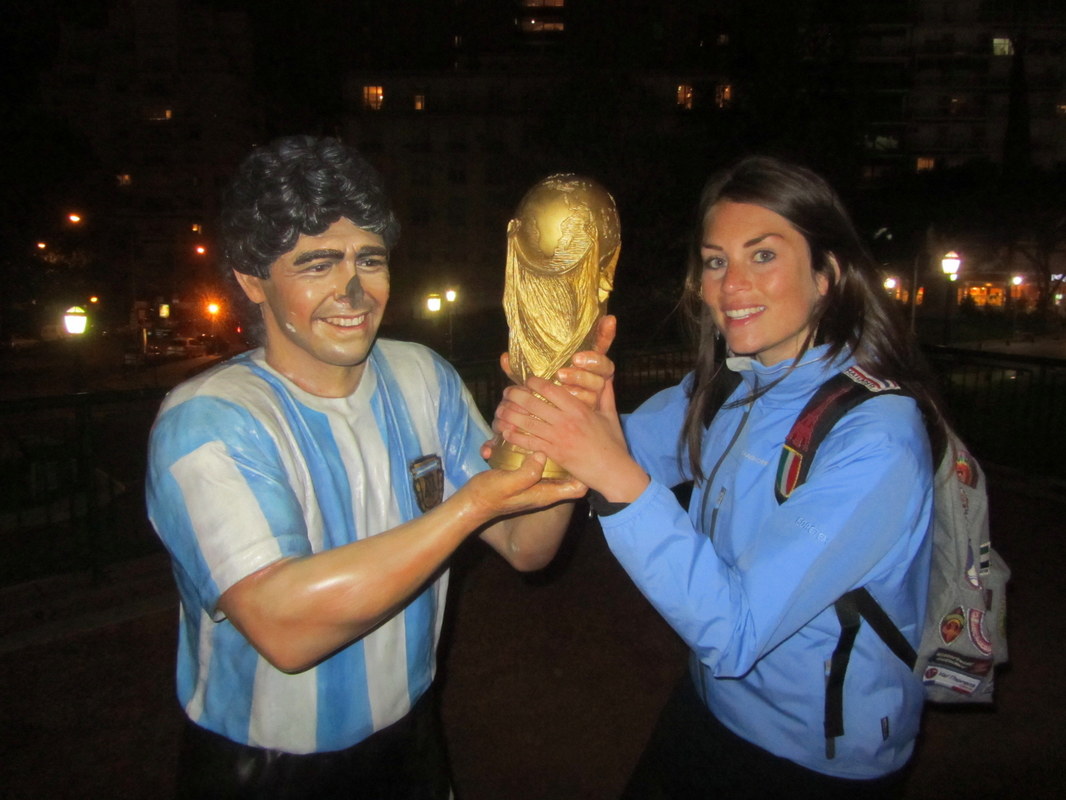 ​Yes, Argentina has three true national heroes. Their names are Evita Perón, San Martín (the founder of independence) and Diego Maradona, and their statues and paintings can be found at every street corner.
​The warmth of the Buenos Aires inhabitants can also be witnessed in the daily interaction. At the first encounter you will immediately be kissed on the cheek by this complete stranger, and also men kiss each other when they meet. And oh oh los chicos! When in my country a man sees an attractive woman he watches secretly, waits half a night, hopes for some eye contact and then (maybe, if he dares) buys her a drink and asks for her phone number. Welcome to Argentina: Here as soon as a man sees a woman of his liking, he stops immediately with what he was doing and makes as much noise as he can. Then he walks/dances towards her and whispers “¡Dios mío! You are the most beautiful chica I have ever seen, your eyes are a gift from God, your mouth, your skin… yes, I think you are the girl for me.” Obviously, they had a lot of practice. Interesting: If you fall for it, I am told they take you to a telos, love hotels where you pay per hour so they have to rush through it. How romantic! 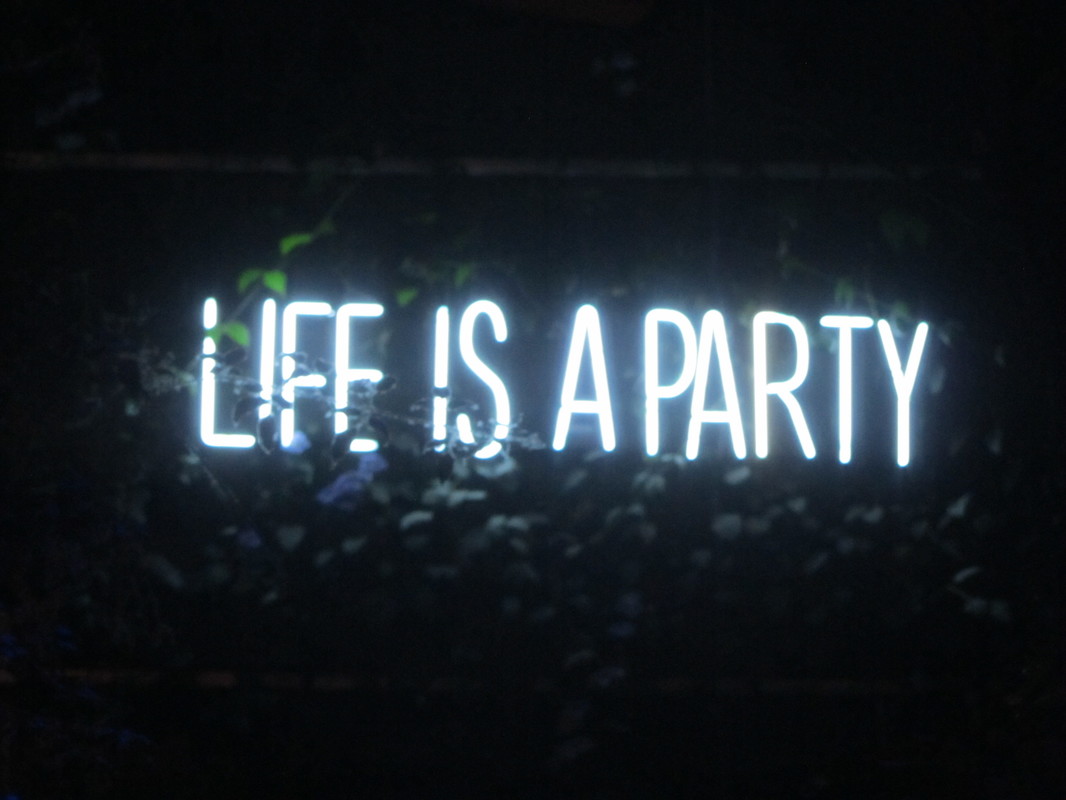 I intended to stay in Buenos Aires for maybe 3-4 days. I ended up staying a week and was still running out of time. BA is 202 km² and has 15,8 mln residents. In short: It’s massive. It’s therefore hard to get bored. Something can look very close on the map, but you might end up walking 1,5 hours to get there. Therefore I always took the metro (5 pesos/€0,45) to 1 area and then walked around. My absolute favorite area is Palermo.
​
All butterflies were released in my stomach when I strolled down the bohemian streets. I could hear the sounds of Nirvana blast out of the speakers of the colorful restaurants and coffee bars. The adorable shoe shops and little designer clothing stores made me light-headed. I turned into some kind of Smeagol… It physcally hurt not being able to buy all that beauty I saw (I have to carry it around for months in my backpack, you see). This place makes you feel like Mary Poppins, after she jumped into the chalk painting on the street.
​When you’re there, don’t forget to visit Malba for a dose of fascinating cutting-edge art, paintings from Frida Kahlo and the impressive temporary expositions.
San Telmo feels like Palermo, but is less trendy and more Argentinean. The walls are covered with the images of both Maradona and socialist visions on politics (which teaches you that the president, the English and the Chileans are not very popular). ​ 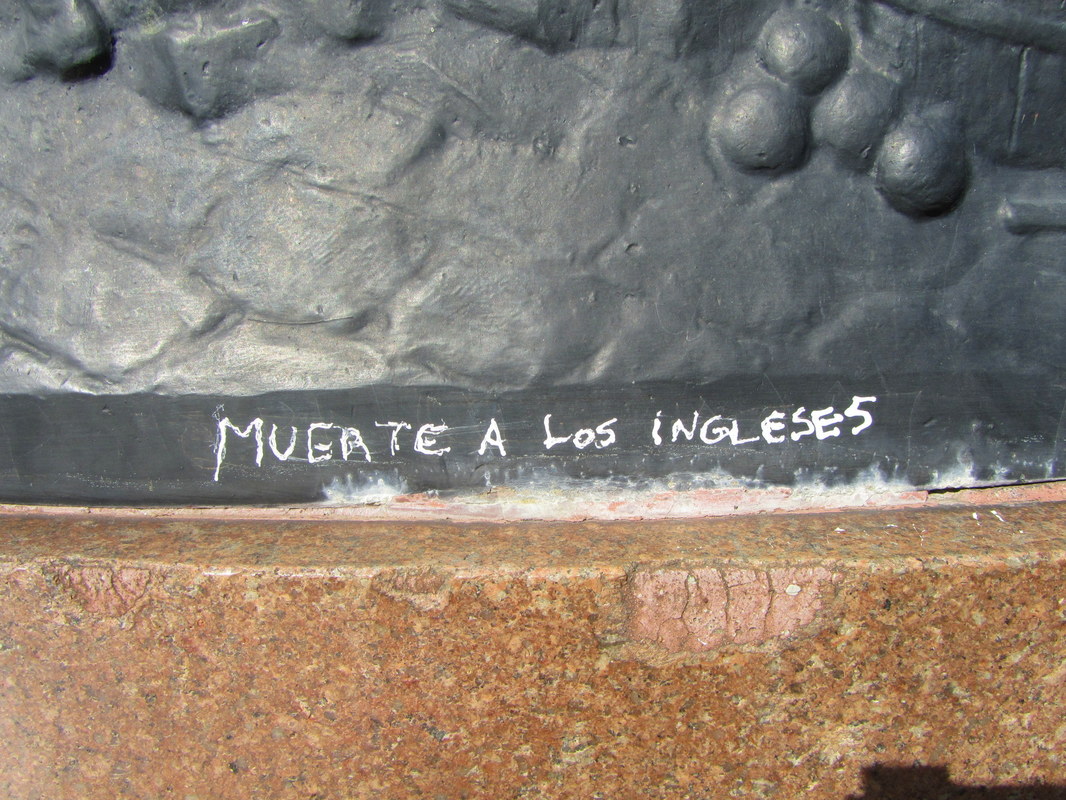 ​Steaks as big as your face can be ordered at Caminito, and at Plaza Dorego you will find people dancing tango on the street. I came back here three nights in a row to get bewitched during these (free) passionate shows the stylish locals gave away.
​The true Argentinean spirit can even more be experienced in La Boca, one of the poorest parts of town that now turned into a tourist hotspot (/trap). It´s the kind of area where you shouldn´t wander around at night (I spoke with some travellers who got mugged), but where you can see people making music on their self-made instruments while dancing hysterically on it during the day. And then, all of a sudden some fake colorful oasis reveals itself, filled up with tourists in too tight 90’s sportswear and camera’s as big as their bum.
I turned around and walked back to my hostel in Montserrat, a central area that lacks character, but has great cheap and local restaurants and is close to the stunning Teatro Colon. A few blocks walking away you can check out the government house Casa Rosada where Evita was once giving her famous speeches. I went to a free 1-hour tour, organized every weekend (you can even go in the president’s office!).
Most Tripadvisor highlights you put on your to-do-list are found in the fancy La Recoleta area. Opposed to well, basically every other country in the world, Argentina is a big fan of the French. Wandering around these streets you wonder if you didn’t accidentally took the plane to Paris. It’s the homebase of the rich & famous, where the dogs wear diapers and the women look like Cher. Public health care is free, but if you don’t care about some peso’s more or less you go to a private hospital where plastic surgery every two years is included.
​
The Cementerio de la Recoleta is a beautiful labyrinth of the ones that passed away, where you can also visit the grave of Evita. During a free walking tour (tip-based), porteña Magdelena told me the story of the death of Evita: Her body was stolen by the military who tried to take power and she was hidden in Italy, where they cut of her nose. Later on a necrophobic soldier took care of her, before her corpse came back to her homeland. Then President Perón then married an ‘exotic dancer’ and made her vice-president. So when mr. Perón died, the country was leaded for two years by a stripper. Nice resumé, stripper – president of a 2.780.400 km² country. Yes, this country is a poco loco (I saw a woman changing her teeth while waiting at the traffic lights, but that’s a whole other story).
Oh, and once you’re there anyway: visit the surrealistic show Fuerza Bruta which plays with your senses.

I can just say I saw something Cirque-du-Soleil-ey, but what? No idea.
​Argentina is a catholic country, and unlike Europe also the local youth is very religious. So what do you need then? Right, a Jesus themepark. Wait, what? I couldn’t believe this was really happening,  so I went there to get my own share of ‘holy sh*t’. What can I say? I watched a 20-meter plastic Jesus resurrect out of the Earth, while I was eating some bread in the ‘last supper’ kiosk and drinking holy water with a straw. Halelujah to that.
​Once you’re in that area, take your time to practice your Spanish when talking with some fishermen, proud to show their catch of the day. Then continue walking to the Belgrano area and the Argentinean version of China Town (Barrio Chino) to watch the streetlife.
After you did all your sightseeing, be sure you stick around somewhat longer to experience the nightlife. You will skip a complete night as it starts at 2AM (!), so be aware not to make plans for the day after. Start with a milonga, a tango night to warm up. After a glass of sublime wine (or 8), head to a nightclub. As a woman, I was easily underdressed (or overdressed, depending on how you see it). The local chicas go out in hotpants that show more than it covers, wearing high leather boots and well, something like a bra. They do their make-up exactly as my transvestite friend Angelina Loci.  It kind of reminded me of home, as prostitution is legal there. 50% of the crowd wears sunglasses, to cover up their coca-eyes, but they easily give themselves away when they start hugging the wall or dancing like Boney M. In short, it’s an experience.

​So I started dancing, looking in the same direction as the Argentino’s surrounding me.
This  blog is written in 2014. I came back to Buenos Aires for almost a year in 2016-2017. I wrote these blogs:​
Free Healthcare in Argentina & Buenos Aires Museums
In order to support the travelers’ community, I spend many hours per week to adequately document all information and advices for prospective visitors, accompanied by a (hopefully) entertaining insight into my personal observations and experiences. This service is and will remain free. However, if you voluntarily want to make a contribution and support my travels and thus the creation of new stories and information supply, here is the button you’re looking for:
Donate
Related:
​- Where to go to next in Argentina? Check out the Argentina Page!
- Travel to Uruguay: the short boat trip to Colonia del Sacramento or (better) Carmelo
- Capital cities in South America: Santiago, Lima, La Paz, Asunción, Montevideo, Quito and Bogotá
- City madness in Sao Paulo, Brazil
- Modern adventures in polluted San Jose, Costa Rica
- Dangerous or incredible? San Salvador, El Salvador
- Slowly falling in love with Quetzaltenango, Guatemala
- Yay or nay? Panama City...
- Wind and hipsters: Wellington, New Zealand
- The ultimate Scandinavian citytrip in Copenhagen, Denmark
- The face of modernity: Frankfurt am Main, Germany
- Nature and culture in the capital: Edinburgh, Scotland
- Where modern meets classic: Vilnius, Lithuania
- A capital surrounded by scenic little villages: Lisbon, Portugal
- Discover Romania's enjoyable cities: Bucharest, Brasov and Cluj Napoca
- Spanish citytrips: Barcelona, Malaga & Sevilla
​- The smoggy capital of Malaysia: Kuala Lumpur
- Getting comfy in the Korean big smokes: Busan and Seoul
- Other places where I (shortly) lived: Haarlem [The Netherlands], Florianopolis [Brazil], Medellín [Colombia], San Jose [Costa Rica], Roatán [Honduras], Granada [Nicaragua], Boquete & Isla San Cristobal [Panama], Port Waikato [New Zealand]