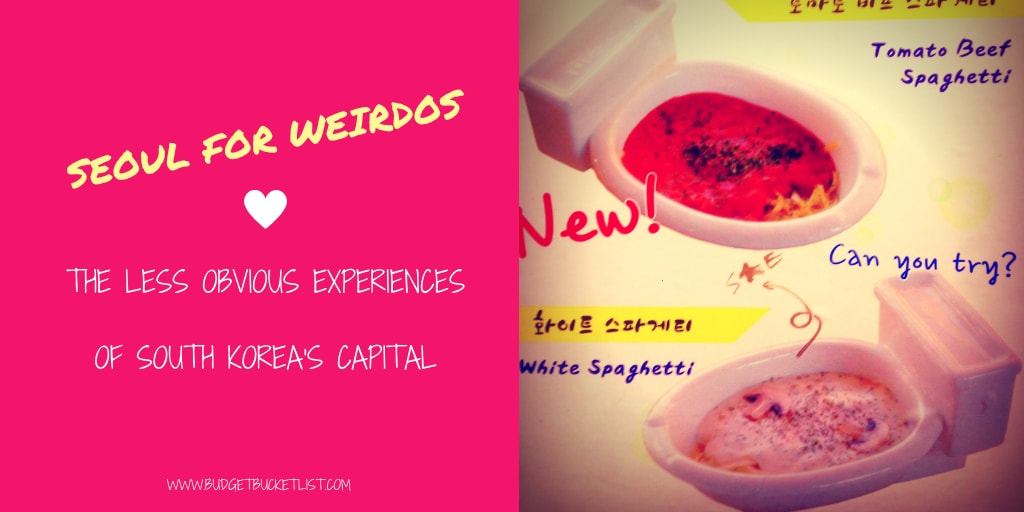 There, I said it.

As a footnote I have to add it’s rather hard to impress me with tremendous cityscapes. As a second footnote that I already saw the lion share of South Korea, and Seoul couldn’t add much to the splendour already observed in this gem of a country.
​
However, if you’re here for a hasty layover, a quick check-korea-off-the-list kind of visit, then you’ll probably find an appropriate - be it insufficient – summary in this bustling, rushing capital. 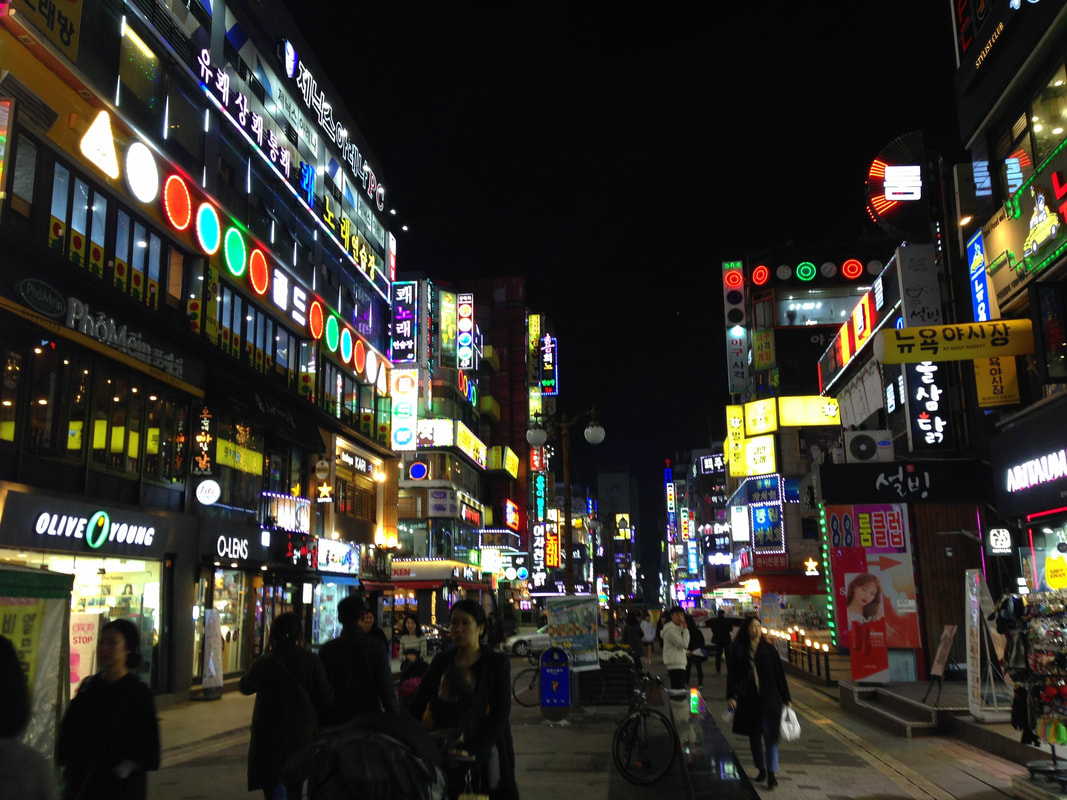 Too busy to read now? No problem, save it for later!
​Save on Get Pocket | Save in Browser Bookmarks| Save on Instapaper
Housesitting and Local Life

Seoul brings museums, architecture and palaces. It has gardens and fountains, man, it even has a true national park: Bukhansan! But if you want an overview of all activities I linea recta refer you to my Seoul Free Budget Fact Sheet (scroll up), I’m not here to repeat it all... no, I spent my two weeks in this city that’s way too big for me tirelessly hopping from housesit to Air Bnb to housesit, trying to grasp the true essence of local life and all its weirdnesses. First in upcoming Goyang (east), then in where-can-we-stuff-more-people Gwangmyeong (south), subsequently in the lively happening Hongdae (central) and to finish it off in the forgotten airport-suburb Gimpo (east).

K-Pop
​
Do I have a favourite? Yes sir, yes I have. Hongdae, focal point of youth culture, cradle of K-pop. I remember very clearly when I was distressingly confronted with the phenomenon. I never heard of it. I’ve been on the road for 4,5 years, I don’t watch TV, let alone listing to Top-40 music of a genre I generally despise (death metal is more up my alley). I didn’t know about the hordes of hysterical American teenage girls filling entire arenas with their frenzied screams. I approached this curiosity in a state of alien.
Busan, 2018. Bleached blond Asians, wearing ragged but perfectly thought out dungarees, their knees not-so-accidentally peeking out. Fluorescent mouth caps somehow attempting a fashion statement, colourful band-aids hinting to their questionable roughness, immediately discredited by their dance moves and excessive make-up use (!)... I had no clue what I was looking at. An undeniable proof of a new youth, no longer composed of my generation. In my young days I was naive, but not naive enough to have a cute crush on a poster boy that would never love me back. Even in a time during which homosexuality wasn’t all that obvious.
​
Hongdae discloses the teenage idols of tomorrow. 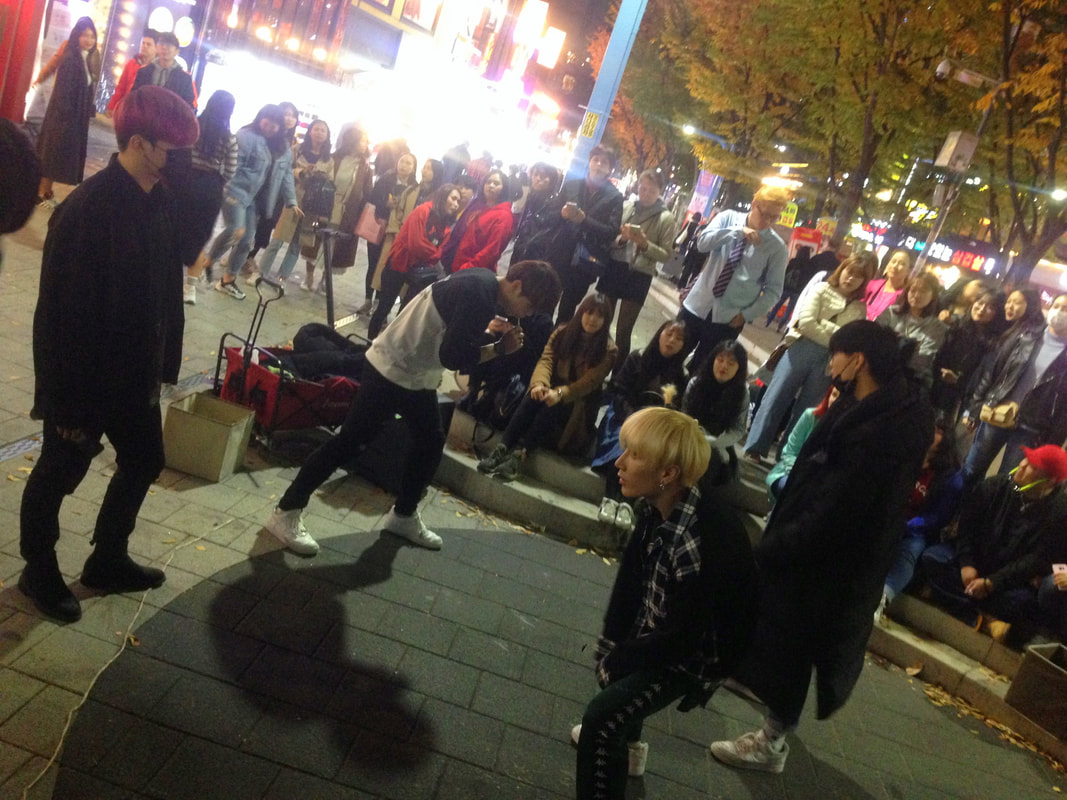 Oppan Gangnam Style!
​
While the K-Pop mania is raging over all hemispheres, one man already put the Korean music scene on the map before it all went loose, whether the locals want it or not... Psy, the man behind the goofy horse dance of Gangnam Style! A little poll around my group of acquaintances proofed most people never realised the performer is Korean though, let alone know Gangnam is factually a neighbourhood of Seoul. Which is where I come in:
A must on the alternative tourist trail. While at it, don’t miss out on Gangnam’s Starfield Library (a new social media hit) and the free-of-entrance Plastic Surgery Museum... doesn’t get more Korean than that!
​

Hanboks
​
This modern face of Korea is strongly denied and toyed with by those longing to times that once were, but never fully granted by the cruel eastern neighbours (and once oppressors). But when the going gets though, the though get going and Korean traditions flourish stronger than ever. Even more so in Seoul, where nationalities flock together to re-create a Korea they’d rather see. One place where an idyllic display of historic customs is gloriously reenacted is the National Folk Museum (free entry). Interesting enough as it is on the inside, the most intriguing aspect is the sight of traditional dresses – hanboks – visitors are stimulated to wear. Also at the palaces, the true grockel-hotspots in town, discounts are granted when arriving in full orthodox attire.

A tad less cheerful, but equally genuine is the Sodaemum Prison. True, you can visit the Korean War Memorial for free, and you definitely should, but I recommend to also go off the grid a bit to visit a less obvious memento. The Korea you can see around you and blend in so easily was fiercely fought for. The prices paid for freedom were incomprehensibly high. If there’s one thing the Japanese are known for in entire Asia it’s their history of brutal cruelty and sadly, Korea was no exception. Allow your mind to turn full sicko and yet, you’ll find tortment techniques more shocking than your brain could ever visualize.

The most disturbing part, however, is the sight of joyful families photographing their children in the sprightliest poses in front of the torture chambers.
Smelly time

None the less, the truest insight into Korean culture came to me in the form of the Poop Café. Yes, really. Only in this corner of the world could one come up with a concept like that.

Always wanted to eat a splattered chilli con carne out of a miniature toilet? This is your place.

Don’t forget to visit the adjoining Poopoo Land, where you can follow the turd’s journey from stomach to anus!
​Seoul. It might not be the highlight of Korea, but a dose of daily weirdness is always around the corner.

​
In order to support the travelers’ community, I spend many hours per week to adequately document all information and advices for prospective visitors, accompanied by a (hopefully) entertaining insight into my personal observations and experiences. This service is and will remain free. However, if you voluntarily want to make a contribution and support my travels and thus the creation of new stories and information supply, here is the button you’re looking for:
Donate
Related:
- Travel more in South Korea: Busan, Jeju Island, Jirisan NP & Surroundings, Andong, Taebaek, Gyeongju, Gangneung, Seoraksan NP & Odaesan NP
​​- 13 Strange Observations of South Korea
​​- A little sneak-peek into North Korea!
- Make a Malaysia roundtrip: Kuala Lumpur, the Cameron Highlands, Ipoh, Taman Negara, Penang, Tioman Island, Kuching, Melaka, Miri, and Sabah!​
- Crossing the border to Singapore... or better not?
- The Philippines: Yay or nay?
- Discover the richness of Brunei in Bandar Seri Begawan!
- My favorite capital cities in South America: Buenos Aires, La Paz, Bogotá and Asunción
- A month in Costa Rica's capital San José
- An alternative experience in Honduras' Tegucigalpa
- Uncovering the hippie state within Denmark's capital Copenhagen
- The unexpected pleasures of Vilnius
​- 8 ways to save money in Vienna, Austria
- The slow charm attack of Serbia’s capital Belgrade​
- Welcome to windy Wellington [New Zealand]!
​- Jordan, a destination on the rise: Extensive guides to Petra, Amman and Wadi Rum