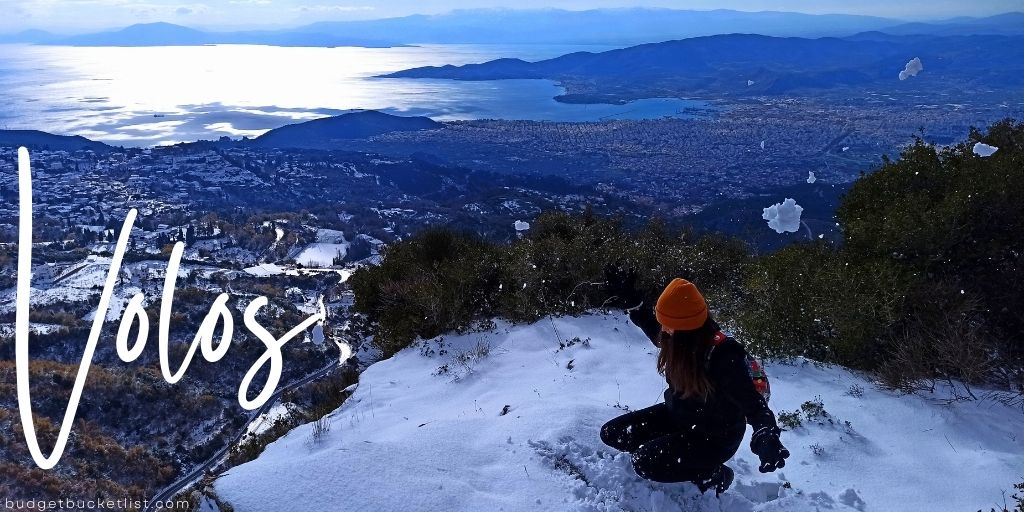 Not in the story-mood? Scroll down for the Quick Budget Fact Overview: an itemized information summary of Volos! ↓
A bit of spare time in the travel itinerary, a lucky hitchhike journey and a friendly Couchsurf invitation… Combine these three random factors and suddenly you have yourself an unplanned adventure in Volos: A pleasant underdog-destination, hiding in plain sight from the crowds in the renowned tourist hotspot Greece. I had no clue where I was getting myself into, but ended up being treated on laidback coastal strolls along the modern port’s boulevard, idyllic snowy mountain getaways, student night-outs and endless rounds of tsipouro. 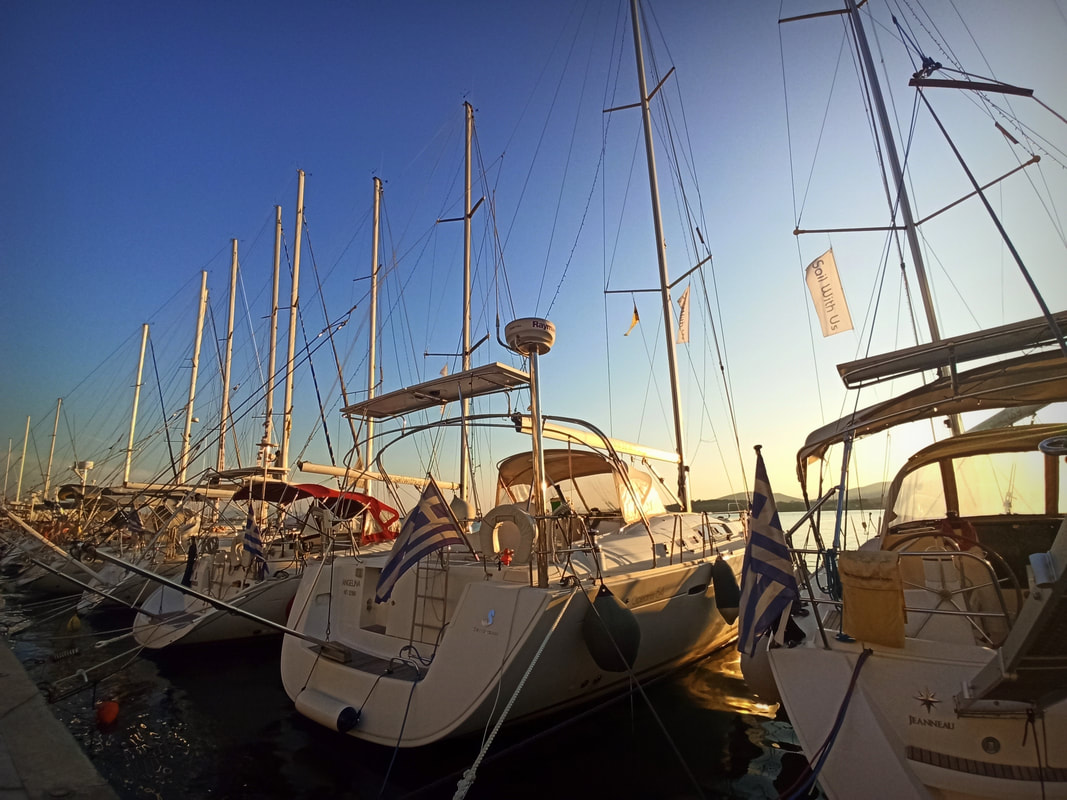 Too busy to read now? No problem, save it for later!
​Save on Get Pocket | Save in Browser Bookmarks| Save on Instapaper
Volos City

Unlike the famous Greek islands and popular mainland-destinations such as Parga, Meteora and Athens, Volos definitely isn’t made for tourism. In fact, since its heydays it has been a commercial city, the natural harbour serving the economic interests of the early settlers. From 1830 on, when Volos truly began to flourish, the construction of a railway line and fast developing infrastructure in the port area enhanced its business potentials, allowing it to grow out to be one of the largest industrial cities in Greece. The Port of Volos served as an intermediary between various major Greek and European cities. Factories focused on machinery manufacturing, textile, distilleries, printing presses and cottage industries quickly popped up in the region, all contributing to the rapid growth of this new industrial hub. As such, the urban layout of 19th century Volos was primarily characterised by the utilitarian facilities serving the port, little attention being given to the creation of an attractive public space. The centre merely comprised two major roads running along the seafront, a few public squares encircled by rather plain-looking public buildings, and zero provisions being made for the public benefit besides some schools and churches.
Volos suffered heavily under the Axis bombardments during the Greco-Italian War, as well as from the Nazi occupation during WWII, when hunger was a major cause of death for the local population. In this period, wages constantly fell, inflation reached a record high and as a result, transactions were mainly carried out in black-market exchanges. Volos was liberated from German occupation on 19 October 1944, but a new Civil War was lurking. In the aftermath, Volos found itself in an economic recession due to most factories being shut down. The earthquakes of 1955 and 1957 completed the destruction of the city's pre-war topography: Most buildings were destroyed and the economy came to a standstill. Luckily, the city's reconstruction was carried out with great speed, focused on fast and easy solutions without a strategic plan… and once again with a total disregard for the city's distinctive urban life.

Starting in the mid-1980s, more evident efforts to improve the city's image were made: Pre-war buildings were listed for conservation, abandoned industrial structures were refurbished and repurposed, and the seafront cupping the Pagasetic Gulf was thoroughly developed. This is the Volos we will find today during a well-deserved visit. The Coastal Promenade invites for a long and laidback stroll all the way from the port area towards the small Anavros City Beach, providing a wide and pleasant accessway for pedestrians, skaters and cyclists. It’s exactly features like this that make Volos feel remarkably “liveable,” challenging its frantic past and industrial character.

The history of Volos as described above is perfectly laid out in the City Museum. This museum serves as an excellent start before any exploration of the town, allowing you to better understand what you're seeing around you while appreciating the many historical and cultural layers. The museum has open Wi-Fi to use Google Lens for translation of the information signs of the ground floor exhibits, whereas the collections on the upper floors have English displays. Other museums include the Folklore Museum of Kitsos Makris, Athanasakeion Archaeological Museum, Tsalapatas Rooftile and Brickworks Museum, Entomological Museum of Volos, Byzantine Museum of Makrinitsa. Its pre-industrial past can be further explored at the Dimini Archaeological Site, Sesklo Archaeological Site and the Volos Fortress. 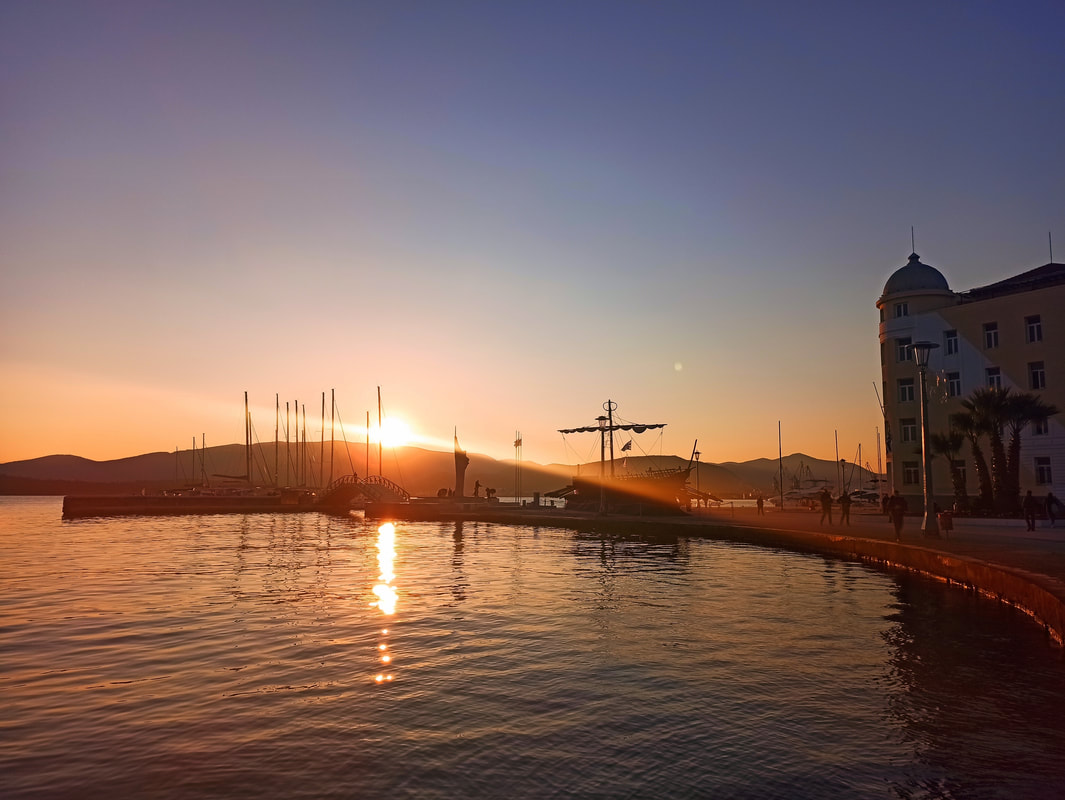 How can one better experience a once again liveable city by actually living it? Throwing yourself in the spots where the locals hang out, strike up a conversation and observe their ways. I had a head start in this regard, as I was Couchsurfing* with a group of light-hearted students, daily reminding me of how resourceful I once was and never will be again when it comes to tracing down an ongoing stream of nightlife activities. I’ll remember those evenings in Volos, eased into by pot-infused hangouts and conversations, while you suddenly find it ending at some drag show at the Kaleidoscope Bar. It were however the simpler “tsipouradika”** that won me over… and I don’t even like tsipouro, the local spirit containing 40-45% of alcohol, nor the fish-dishes served with them (I’m a vegetarian).

It’s the practice, the ambience and the conviviality this tradition is drenched with that truly made me feel I reached the core of Volos culture.

Indeed, the phenomenon of the tsipouradika, establishments serving tsipouro accompanied by fresh ‘n free plates of food at every round (very much like the Spanish tapas or Italian aperitivo), is strongly tied to Volos. This true cultural heritage dates back to the early ‘20s, when after the loss of the Greco-Turkish War a stream of refugees from Smyrna “found their way”*** to Greek cities such as Volos, settling in the Nea Ionia district. Back in those harsh times of poverty, distress and social exclusion, it was common practice for for the male refugee population to have a drink after a day of hard work or, worse, a day of futile search for it. Nothing was cheaper than tsipouro… nothing was stronger either. Hence the need to serve the 25ml bottle with some bites to ease down the boozing.****


* A free traveller’s exchange where you are hosted by a local.
** I went to a very local and affordable tsipouradiko called "Δεμίρης Παραδοσιακό Τσιπουράδικο"… just copy-paste it into Google Maps.
*** And with that I refer to the population exchange which people were forced into. Muslims were sent “back” to Turkey, whereas the Orthodox living in Turkey were expelled to Greece. I dive a tad deeper into that in my Thessaloniki article.
**** warning: portions are incredibly generous, definitely don’t eat in advance like I did. 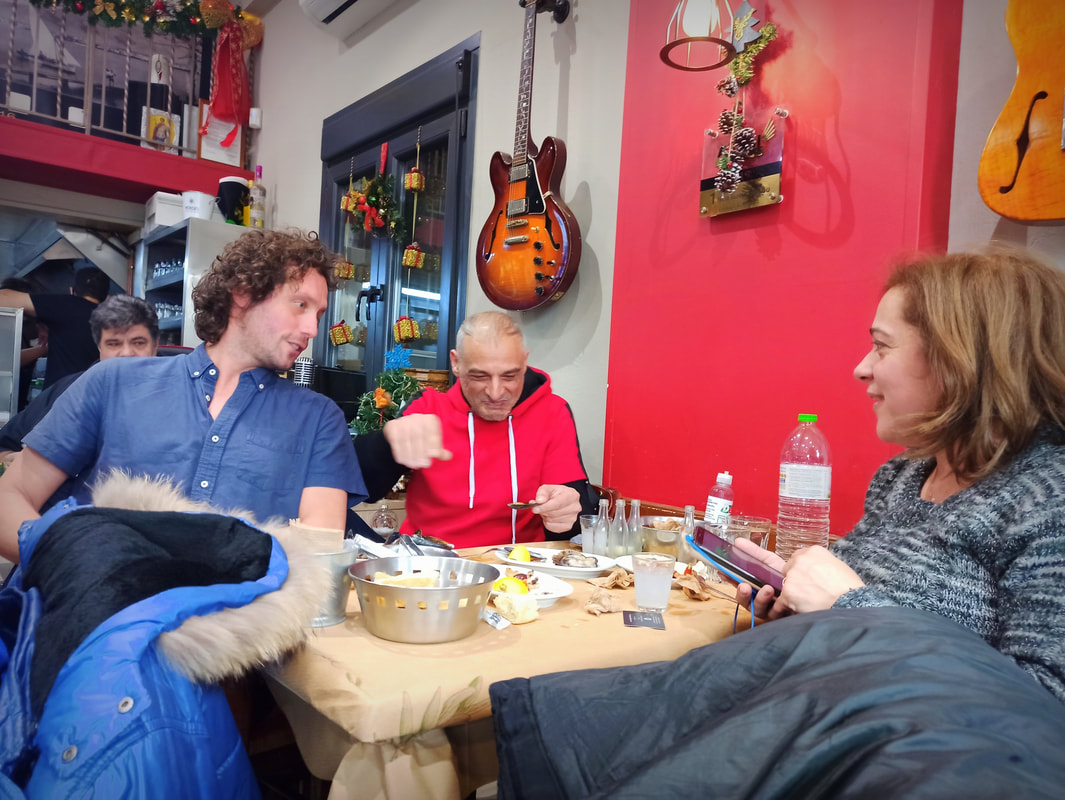 Volos is the place where people live… Mount Pelion is where they head to in the weekends. I mean, wouldn’t you? The thickly forested peaks encompass numerous springs, gorges and hiking trails leading to beaches and coves. Pelion itself forms a hook-shaped peninsula separating the Pagasetic Gulf from the Aegean Sea and is considered to be one of Greece’s most alluring mountains… inspiring tales and myths alike. According to Greek mythology, Pelion served as the home of Chiron the Centaur, who was the tutor of several heroes such as Theseus, Herakles, Jason and Achilles (Peleus, whom Pelion is named after, was Achilles’ father). When Chiron hosted the marriage of Thetis and Peleus, the uninvited goddess Eris showed up vengefully with a golden apple engraved “to the fairest”… triggering a dispute between Hera, Athena and Aphrodite eventually leading to the Trojan War. Nowadays, the Centaur Path is still a popular walking trail.

Besides goddesses and other creatures, one can also find the Agriolefkes Ski Resort on the mountain top, providing a modest 3km of slopes.

Volos is the main gateway to the Sporades island group, including a total of 24 islands, of which 4 are inhabited: Skiathos, Skopelos, Skyros and Alonissos. As I visited in winter, it was unfortunately not the best season for exploration, so I cannot provide you with personal recommendations. However, I found the website Ferryscanner most informative when it comes to schedules and ticket prices (all over Greece): 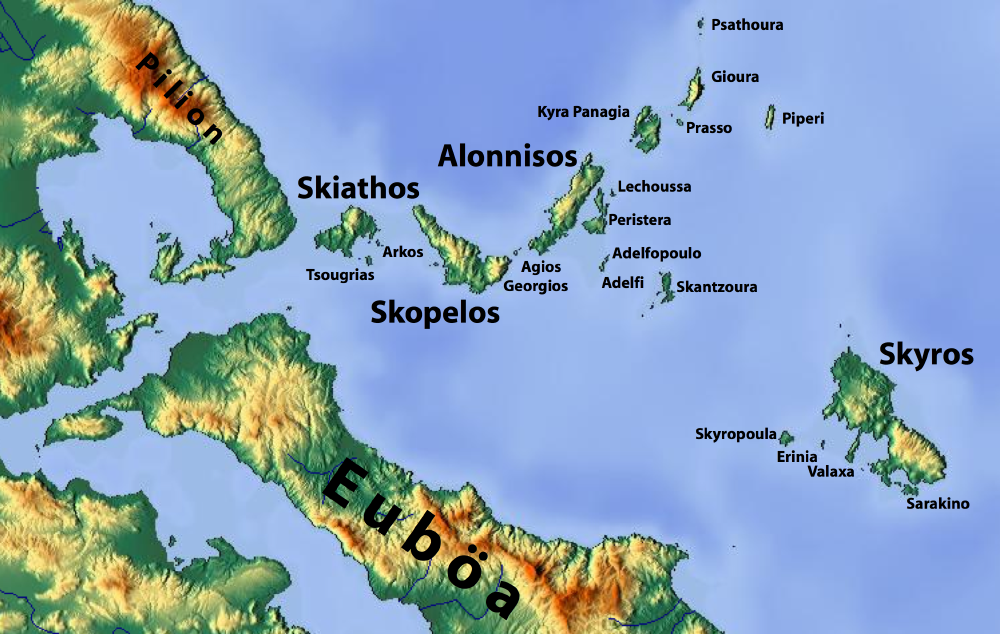 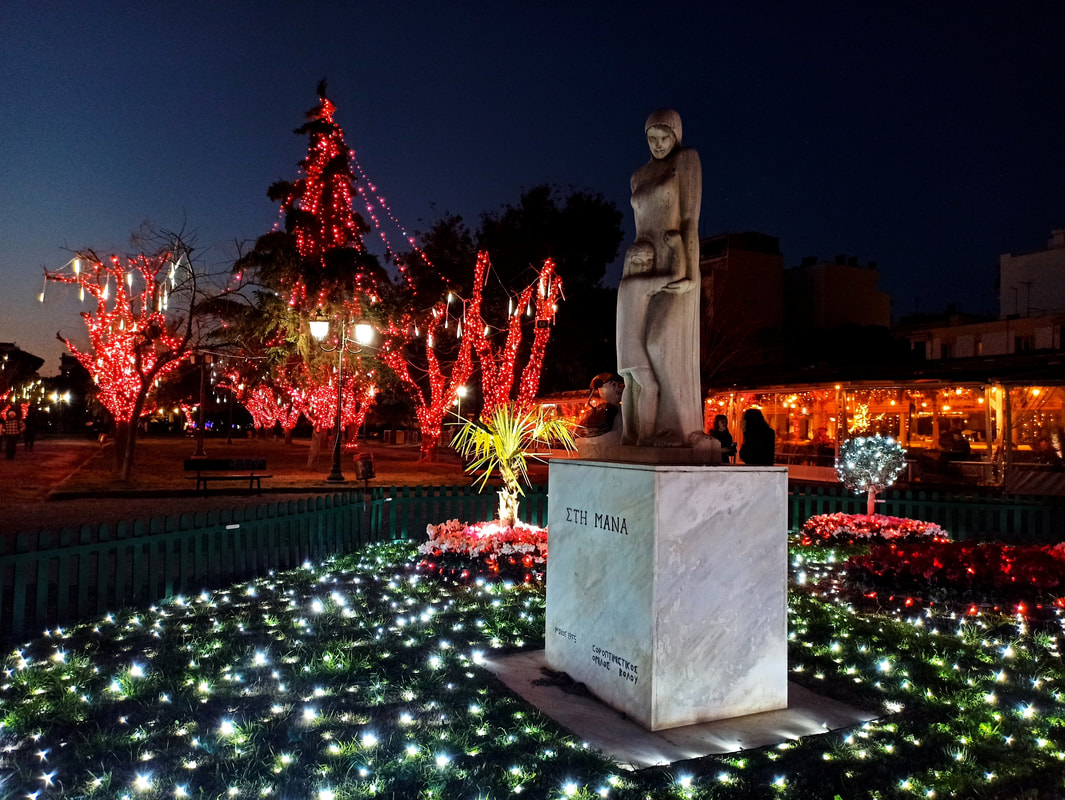 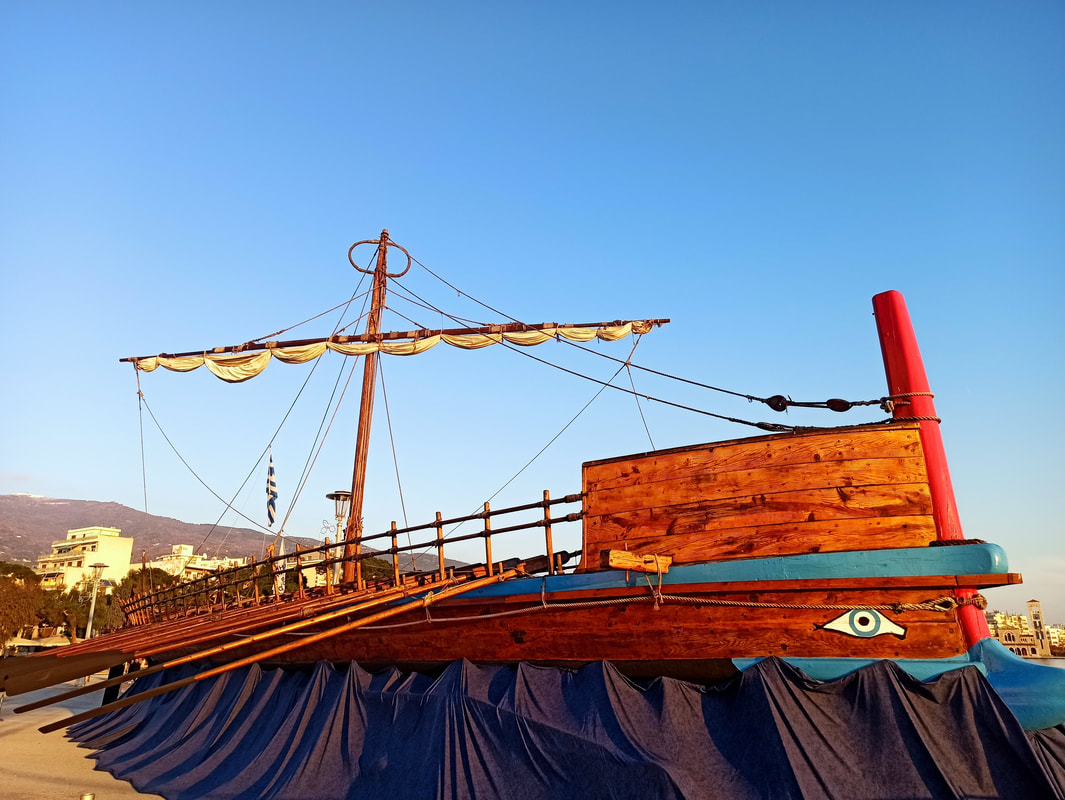