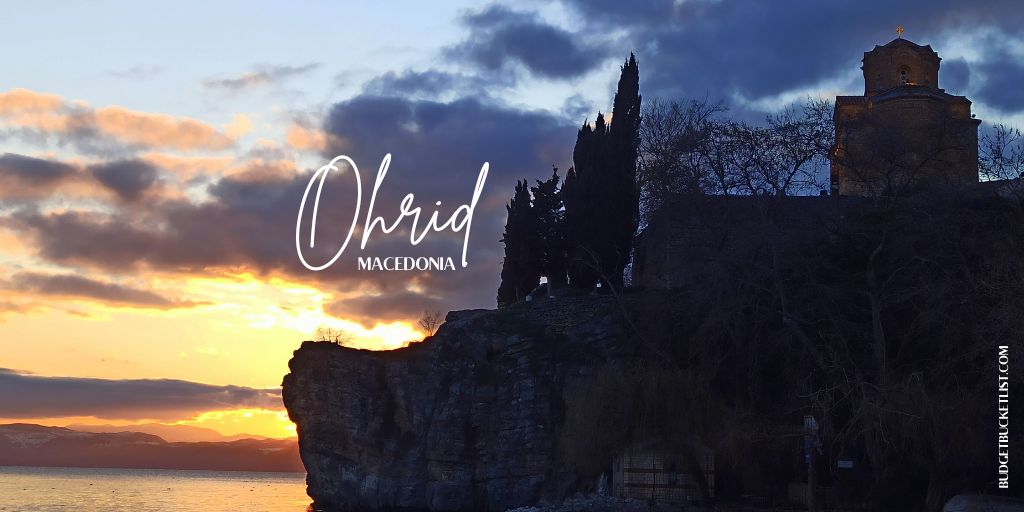 Not in the story-mood? Scroll down for the Quick Budget Fact Overview: an itemized information summary of Ohrid↓
I simply love traveling off-season. That blissful time at prime destinations when prices are low and crowds are gone. However, this doesn’t always fly with regards to beach resorts and coastal destinations… the quiet pre- and post-period can cause the alluring hustle and bustle of a local beach scene to promptly die out. I spent an entire autumn, winter and spring in the Balkans and concluded this over and over again when roaming down the coastline of countries such as Montenegro and Albania: I found long stretches of delightful beach towns, offering almost private access to the crystal-clear waters of the Adriatic, yet lacking the turmoil caused by those sunny summers. That said, I traced down one Balkan “beach” resort breaking that cycle: Ohrid. Why? Because this place is so much more than just a pleasant coastal town…

Ohrid is a jaw-dropping UNESCO World Heritage Site, rubbing shoulders with the illustrious Ohrid Lake and Galičica National Park. Even though I had already seen the famous Ohrid Lake from the Albanian side (its 70% Macedonian and 30% Albanian – bordering the town of Pogradec), the two destinations on opposite sides of the water make for a very different experience. Fair enough, Pogradec is pleasant… but Ohrid is extraordinary: Macedonia’s sweetheart and #1 tourist destination for very clear reasons. When in Macedonia, there’s no way around it. 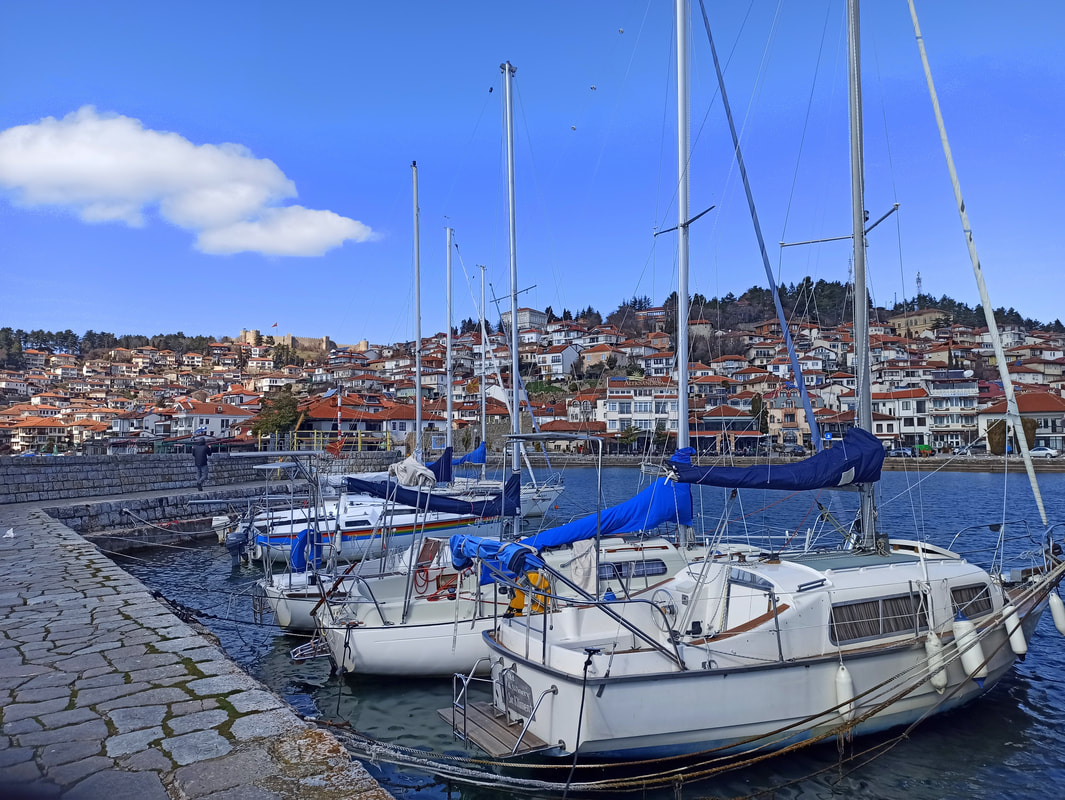 Too busy to read now? No problem, save it for later!
​Save on Get Pocket | Save in Browser Bookmarks| Save on Instapaper
More Than Just a Coastal Town

What does a town have to do to be crowned UNESCO World Heritage in its entirety? Looking at Ohrid, apparently combining an outstanding natural element such as Lake Ohrid with carefully preserving one of the oldest human settlements in Europe. The town ensembles a great quantity of archaeological remains from the Bronze Age up until the Middle Ages, including some 2500 square meters of Byzantine frescoes and over 800 icons (check out the Icon Gallery). The cultural, architectural, historic and artistic value is immeasurable. Let’s face it, you won’t be able to visit all of Ohrid’s archaeological sites and churches… the small city is known for once having 365 of ‘em, one for each day of the year. However, when making a selection, try to include at least a few of the following: St. Sophia, St. John Kaneo, Holy Moher of God Perivleptos, Monastery of St. Naum, Holy Mary Perybleptos, Plaoshnik, the Holy Virgin Mary Kamenik and/or St. Clement* and Panteleimon. Church’ed out? The National Ohrid Museum (Robevci House) presents an ethnographic collection in the former house of one of Ohrid's most influential families.


* Saint Clement of Ohrid was one of the first medieval saints and one of the disciples of Saints Cyril and Methodius. He is associated with the creation of the Glagolitic and Cyrillic alphabet. 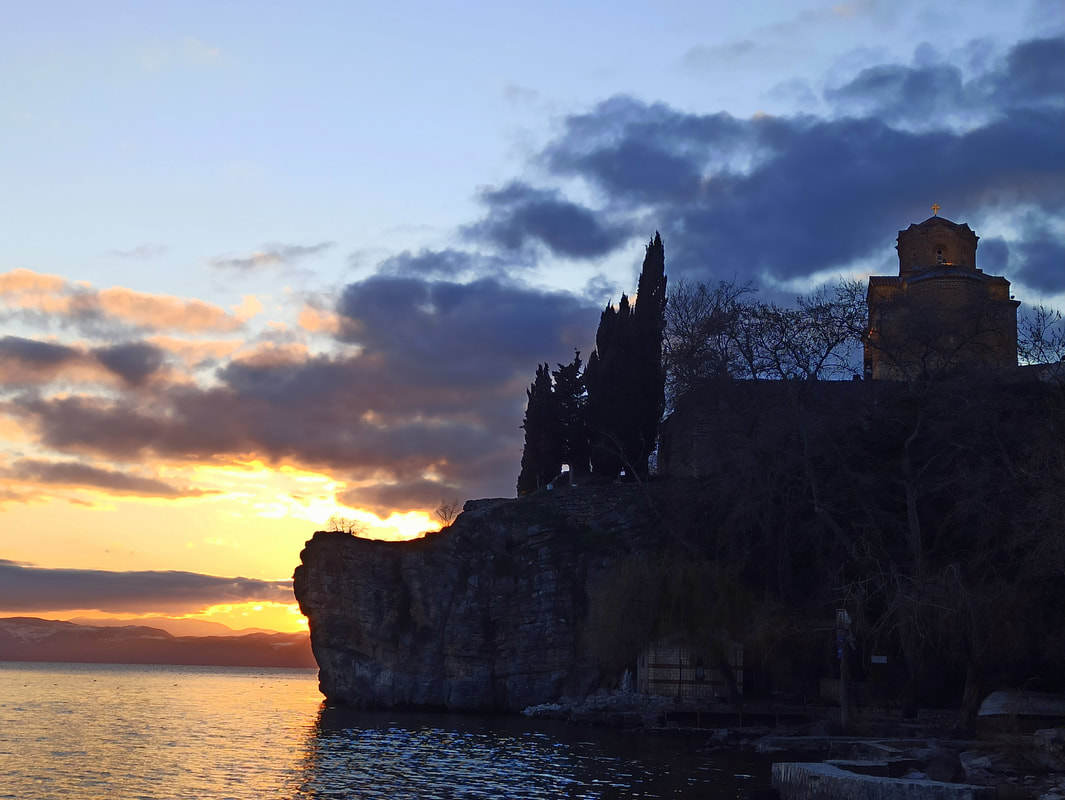 Another intriguing sight, encompassing marks from almost all timelines embroidered through Ohrid’s history, is the Samuel Fortress. The construction, which was started during the times of King Philip II when the town was still called Lychnidos, is one of the largest of the country and occupies the entire Ohrid Hill. Outside of the downtown area following the coastline, you can track down the Bay of the Bones, which is a major tourist attraction. This museum, built on poles on top of the water, represents a reconstruction of the pile dwelling settlements of the Bronze and Iron Age. The most interesting part is that it’s actually hovering above the foundations of the original one, which can be explored by the means of scuba diving.

With Ohrid being as popular and well-visited as it is, keep in mind that all previously mentioned sights charge entry fees (yes, even the churches – even though they’re often prettiest from the outside). Freely accessible historic sights include the Ancient Theatre and the Gorna Porta, the entry gate to the ancient city walls.

Another major draw, setting Ohrid apart from the more “standard” coastal resorts, is the extraordinary Galičica National Park right at its side. The park, existing since 1958, covers no less than 241.5 km², with peaks as high as 2265m (Kota F10). Nature enthusiasts can observe over 1600 different plant species and a rich fauna. As everywhere in Ohrid, the tourist infrastructure is sublime. A very well-kept and comprehensive trail network makes hiking a straightforward and hassle-free activity, with endless opportunities to mix and match different routes to suit your level of fitness and anticipate on external factors such as the weather conditions. 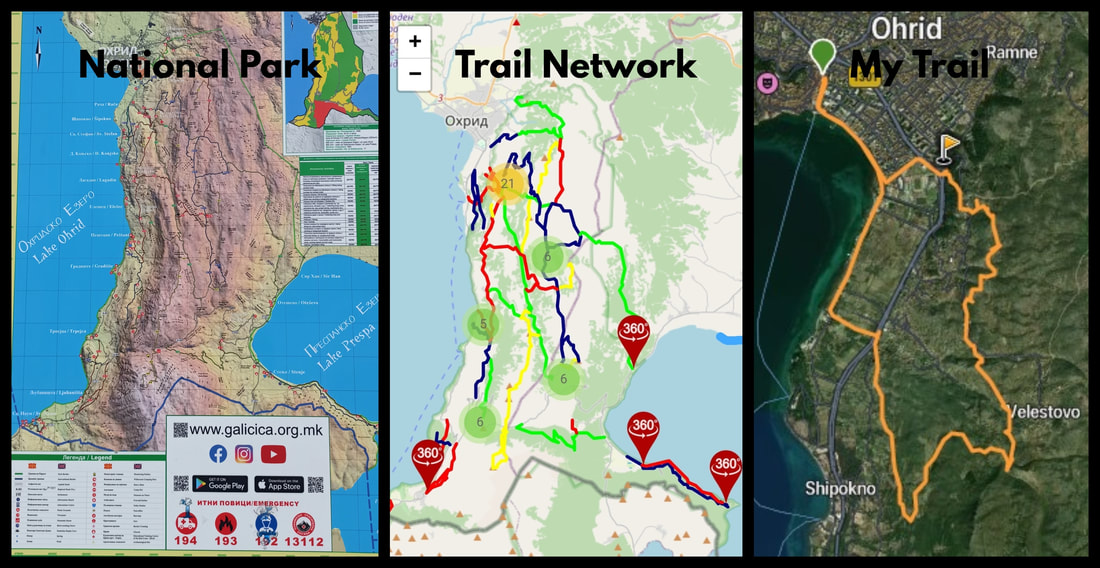 My trail was walked in winter when the higher parts were inaccessible due to heavy snowfall. In summer, more extensive hikes can be made. I recommend my marked starting point (flag), as it allows you to simply walk towards the park from the downtown area, without the need for taxis or public transport.
Besides hiking, there’s another, more bad-ass way to discover Galičica. ATV Adventure Ohrid provides adrenaline-drenched quad and buggy tours right through the wilderness of Macedonia’s most pristine natural settings. The soothing scenery of snow-capped tree branches and gentle traditional villages, withstanding the test of time, couldn’t contrast more sharply with the roaring motors of me pumping that hulk of vehicle up the slippery hills. It are exactly those moments that reveal the cheeky child in me. Blasting through the mud until the dirt drips from my eyebrows while a memorable panorama stretches out beneath me… a shortcut to honest smiles of pure joy.


More Than Just A Coastal Town… But…

Ohrid has so much more to offer than just a charming coastline… but the coastline it does offer, is immediately one of the Balkan’s best. A year before the Old Town was absorbed into the UNESCO-list, Lake Ohrid already formed a part of the protected heritage. This body of water has been around since an estimated 3 million years, forming the habitat of more than 200 plant and animal species which are entirely unique to the lake. Besides a variety of beaches, including the Lagadin, Gradiste and Ljubanista Beach, Ohrid Lake offers excellent opportunities for water sports, including scuba diving and paragliding. A more accessible and laidback way to explore the clear waters is per boat tour, for which I strongly recommend Ohrid Lake Cruises by Mato. Considering the very affordable rate of just €25 for a 6-hour boat tour, it’s worth mentioning that this is one of the most comfortable and luxurious boats I have ever cruised around in. Sinking deep into the soft leather seats while gently rocking on the waves, I listened to the captivating stories of Captain Dimitar. My brain tried to juggle taking in all this detailed and entertaining information, while drinking in this million-dollar landscape I simply couldn’t get enough of. What a perfect day out on the water… a memory forever tied to my times in Macedonia.

The Greek-Macedonian name dispute explained:
Even though the video concludes with stating that a solution has been found and an agreement reached, keep into account that this is only on paper. The people of the country of Macedonia are extremely offended if you refer to their country as North Macedonia, and when traveling in Greece you can get into heated discussions when you mention the "country of Macedonia." I learned this the hard way ;)

* A relatively complete overview of all sights and activities can be found on TripAdvisor or Lonely Planet… these lists include the ones I personally recommend. 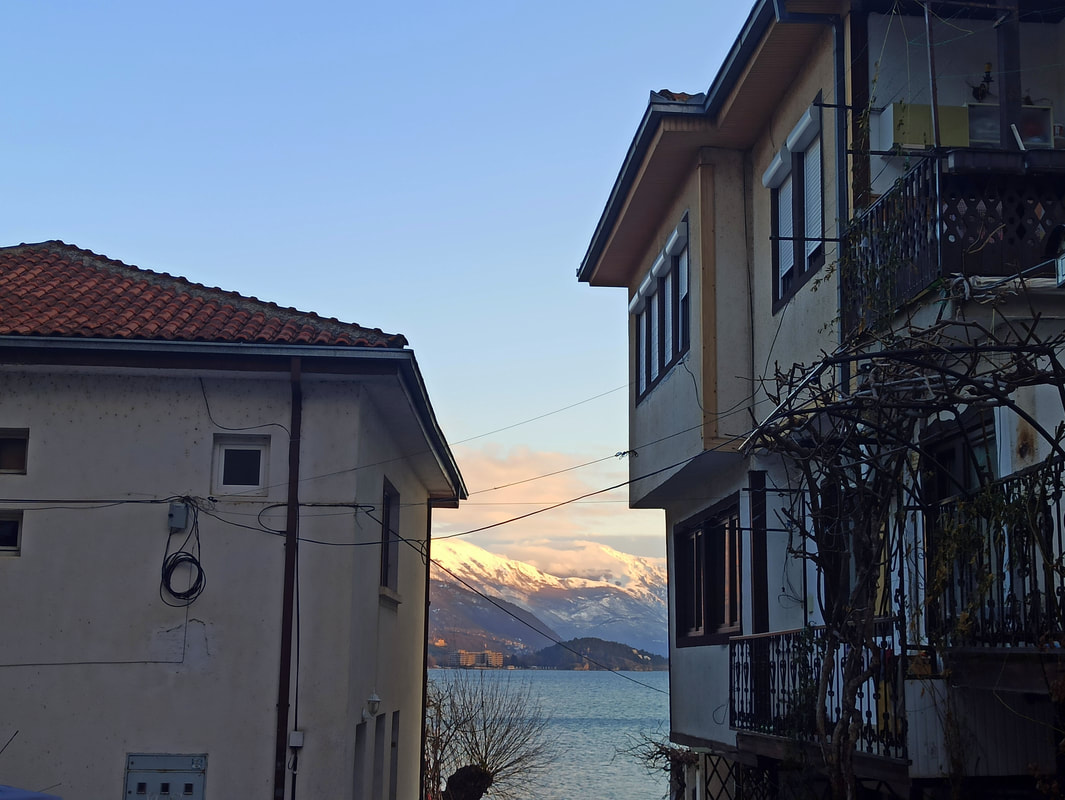 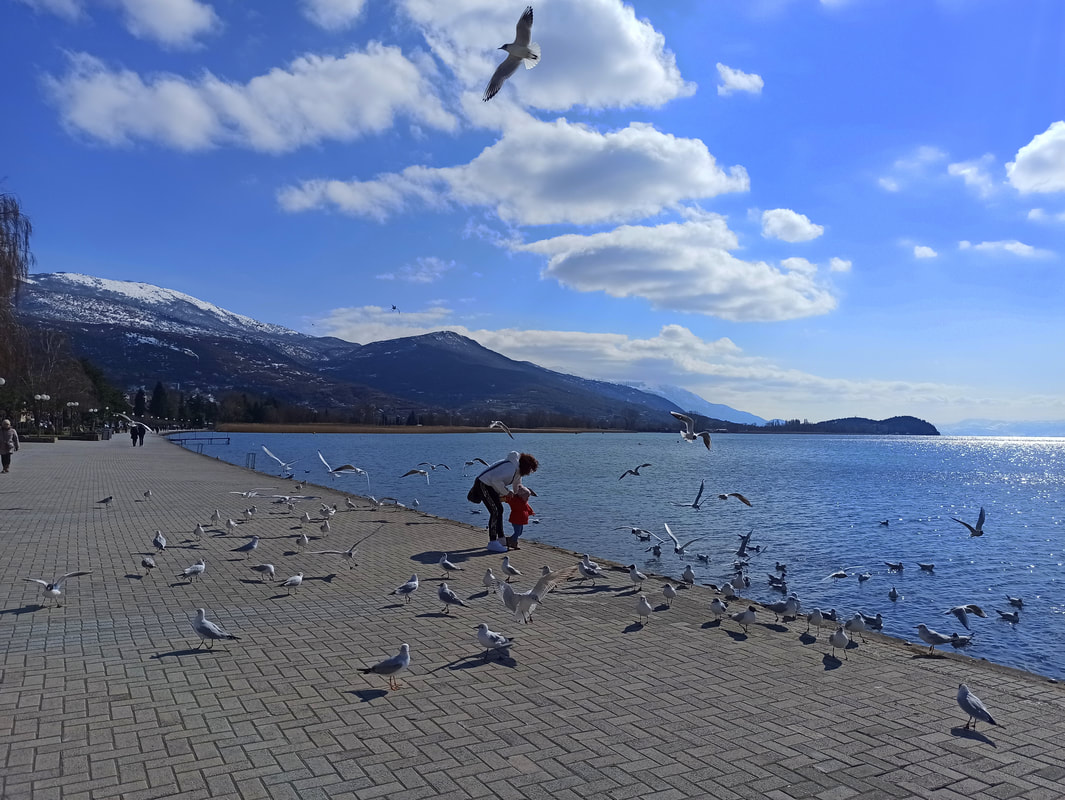