Download File
An edited version of this post can be found on STEEMIT: Upvote me to support my travels for free!
​
I figured four or five days in Florianopolis should do the trick. Those four days turned into three weeks. And then I came back for yet another three weeks. Whether this is related to the place itself or the people I met on these grounds I leave in the middle here (which kind of answers it), but location is certainly a contributing factor. 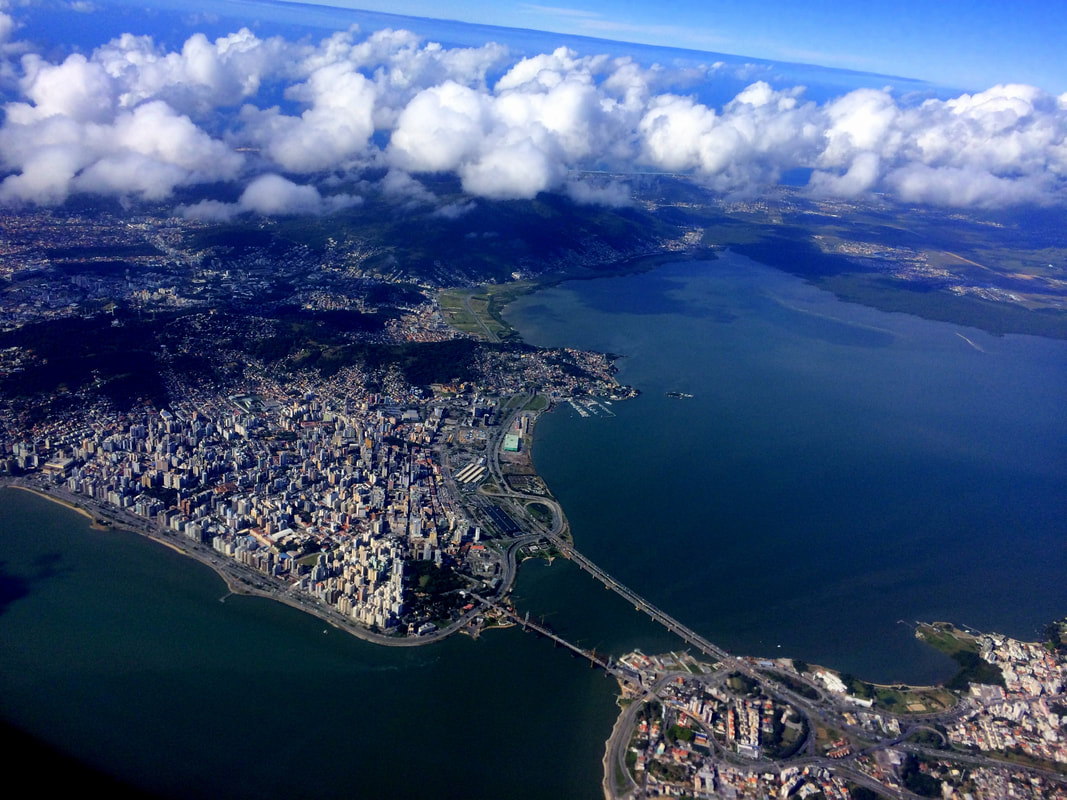 Simply put together the elements island, sun, beaches, good food and palmtree-dotted lanes, and you get an idea why this place has such a strong magnetic effect on (the mainly Argentinean) crowds. However, if you now find yourself dwelling on some idyllic image of you jumping off the springboard sticking straight out of your bamboo hut while a hot muscular João kayaks towards you to bring you the coconut he freshly slammed out of a palm tree, you totally got the wrong picture. Florianopolis, Floripa for friends and family, is developed. Un-Brazilian developed.
​
Perfect asphalt cuts a way through jewels of real estate shaping every broker’s wet dream, people of all colors parade through the streets full of the latest fashion, vegan restaurants and organic pop-up markets reflect the national dream of health-trends and everything is expensive, so damn expensive.

[except of car hire I noticed, somehow]
That also means that the touristic infrastructure is up and running and ready to give you the great outdoor experiences you’ve been dreaming of. Do I already sound like a slick commercial break to you?
​
Ok, let’s cut the bullshit then right there. Because of course, this is still Brazil and Brazil is still in Latin America. And when something is “up and running” in this pleasant slice of our planet it means “whenever they feel work is on the agenda”. So if you want to organize, let’s say, a 4WD ATV adventure, that means that you email the tourist agency, and again, and call them, and again, and email and call them again a few times more, then go in person to their office to find it closed for undefined reasons, then stalk them via Facebook, Twitter and Instagram until someone found enough working spirit to  grant you an answer, but then cancels on you again, and again, and one more time until you leave town and you wonder what those people on the brochure-photos have done to get their ass on that quad in the first place. In short, I didn’t ride any quads, two times three weeks wasn’t a sufficient time span to arrange anything tangible. BUT, I did basically everything else. 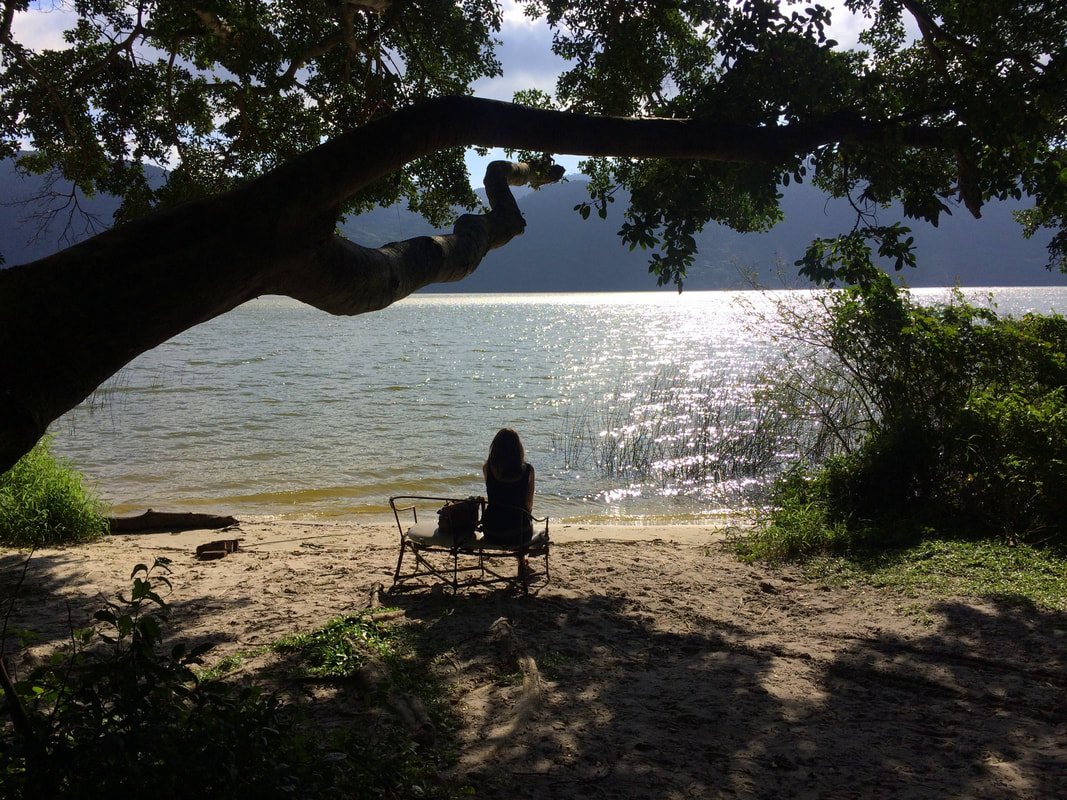 I traced down all hiking trails on the island and started working down my little list. The Arya of the outdoors.

The short but satisfying Trilha de Costa de Lagoa leads you alongside one side of the Lagoa de Conceição, in my opinion the most vivid spot on the island.

​Lingering through the jungle alternated with strolling along people’s backyards, you end up at a tiny town where lakeside bars await your arrival with cold wine (yeah yuck, they do that in Brazil). From there a budget boat drives you all the way back to where you came from.
A bit more physically demanding and therefore more interesting are the trails sprouting out of Lago di Perri.

Balancing on mossy rocks and sliding along slippery tree trunks you’ll reward yourself with views over a stunning lake and even a waterfall if you go far enough (which I unfortunately didn’t, as my +1 didn’t share my trekking passion… and as I liked him more than the trail we headed back ahead of time).
Another interesting one is the Trilha Santinho at the northern tip of the island, going up and down a steep hillside forcing you straight through a densely overgrown wilderness where snakes haste away just in front of your feet hushed by the vibrations of your footsteps. As the trail in itself is rather short (I did it jogging in less than 40 minutes), I decided to initiate at the beginning of Praia de Moçambique, following its pearl white coastline for hours until the forest interrupted this virgin landscape. 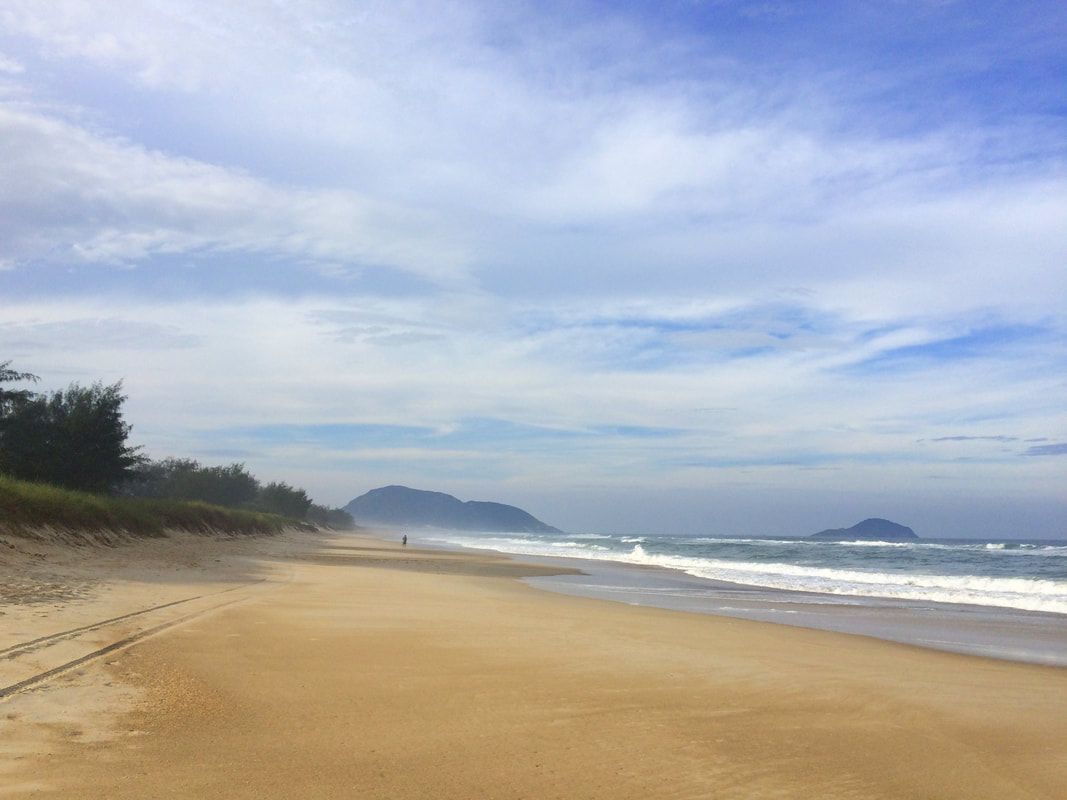 These strolls are usually perfect to organize the maze of my mental wanderings, but this day I found a companion leading the way. I don’t know his name or his usual whereabouts, but he was playful and furry and as his blisters and infected eyes revealed the truth about his physical health, I figured he could use a friend who can make the limited lifetime he has left a tad more pleasurable. We were a perfect team. 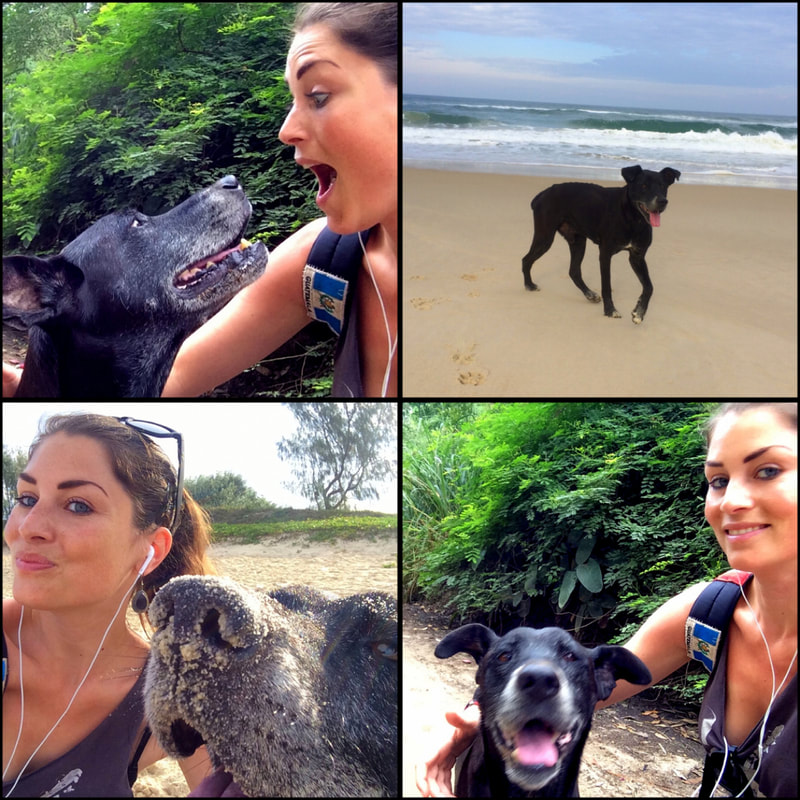 If you have your hiking boots all tied up anyway, why don’t you head to the Trilha da Gravata when you’re at it? Truth told, it’s a pain in the arse to find the entrance (I climbed over a guard fence, got subsequently bitten in the bum by a bunch of hounds who were NOT waiting on my friendship and then got my entire foot sucked in fluid mud in my attempt of tracing down the real trail), BUT thou shalt be rewarded.
And don’t worry if you spent all those hours you planned to spend in the gym fattening yourself up while watching Netflix: this one is laughably undemanding. I clambered down to secluded beaches and ascended flaring rocks overlooking the bays that appeared to be my little kingdoms.

The hilltops grant views over that long white stretch called Trilha da Gravata, paragliders running into eternity with these sights right under the shadows of their parachutes. 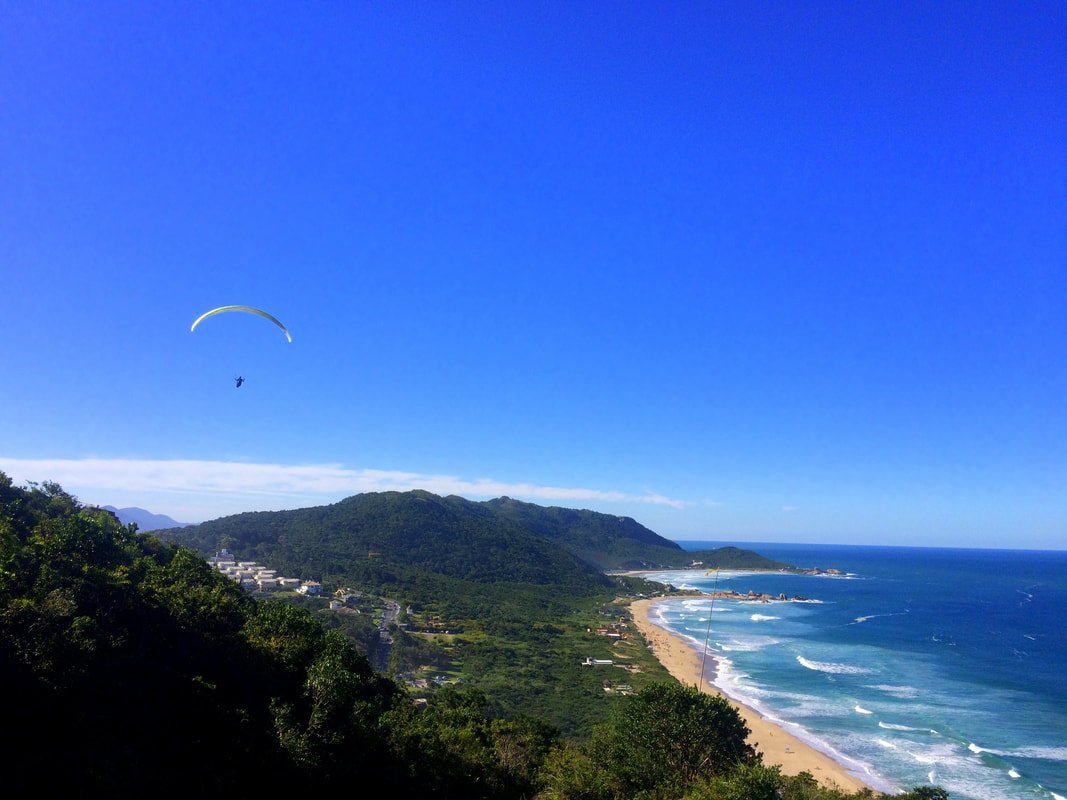 That brought me to an idea. I paraglided before, in Slovenia and Argentina to be exact, and yes, I enjoyed myself. Why couldn’t those areal adventurers tie me up and take me for a little ride through the sky? Well, because the wind wasn’t strong enough on this side of the island to keep two people up, for starters. Which is why I went all the way to Santo Amaro, where the wind was exactly perfect and ready to deliver my own all-time high. 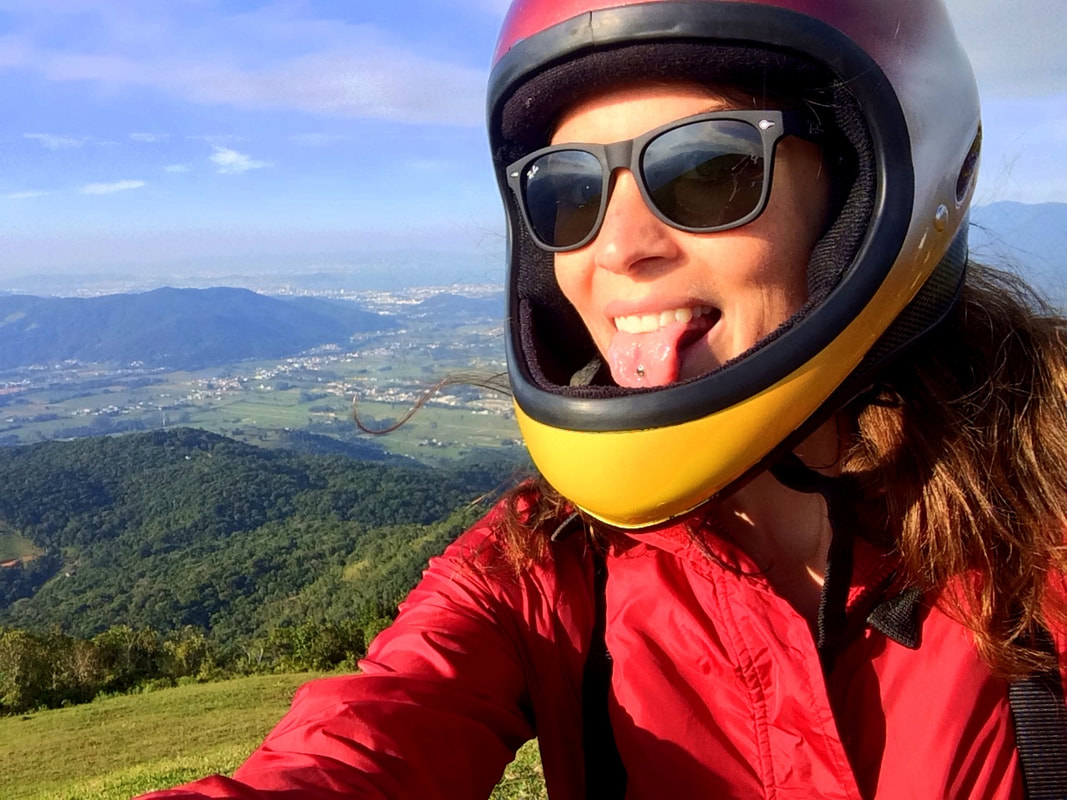 Honestly, I was a little bit worried up-front. You see, the company I got hooked up with came up with this genious name “Icaro Parapente”. Deep! [Icarus, didn’t that have something to do with some ancient Greek or Latin mythology? Well, then it must sound smart and inspiring!] Yeah… it’s always a bad idea if people who haven’t studied but still want to sound intelligent head down hardcore on the ancient history route. I personally did waste my time with studying Latin, classic Greek and mythology for the duration of 6 years and I can tell you: the amount of people I observed with grammatically incorrect Latin tattoos since then is just too damn high! I also know that Icarus tried to fly but instead crashed into the ocean and died an instant death. Where the hell am I getting myself into?
Luckily, the employees of Icaro Parapente spent all that time I allocated to my studies on practicing the art of gracefully jumping off mountains, so unlike this horrifying name suggests I was in good hands.

If I dare to run off hills on the loose, doing the same attached to some cables wouldn’t be the greatest concern then either. I might have expected a bit of a bigger zipline-network, but in this case it just meant I settled with doing the same track several times. I had worse afternoons. 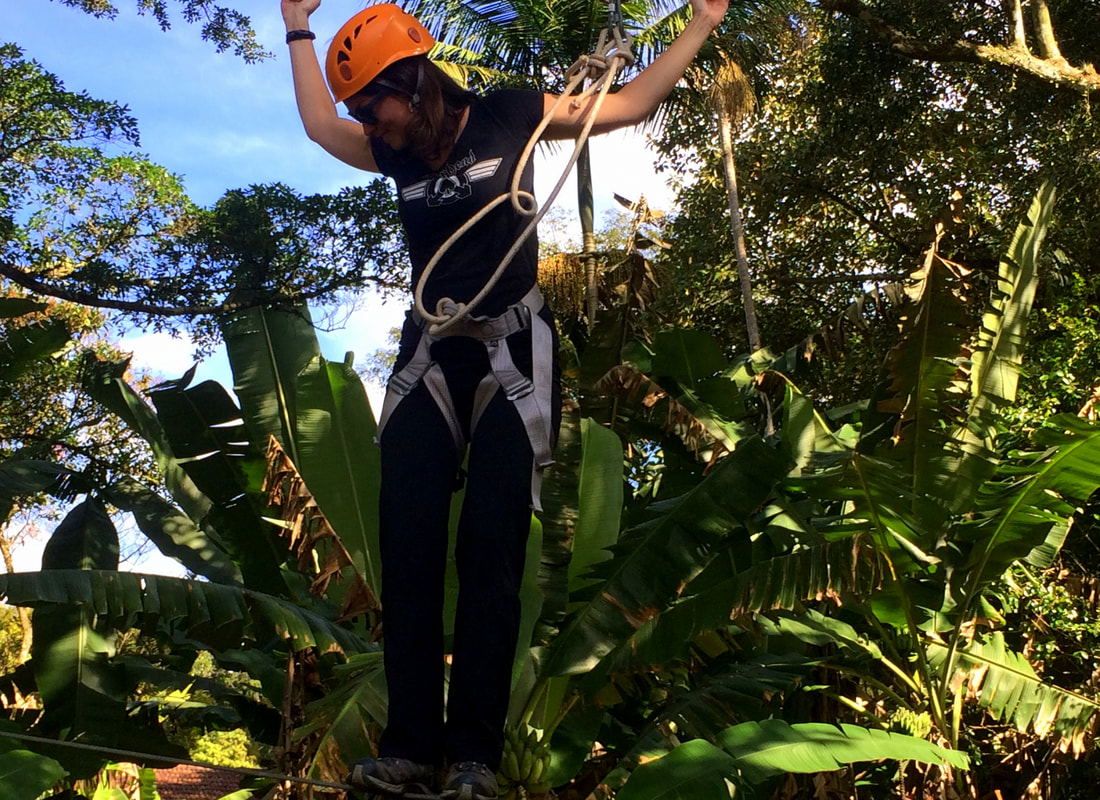 ​If sliding through the air gives me such great pleasure, then for sure racing through the sand could match this joyful sensation. So we headed to Dunas de Joaquina, the inimini Sahara of Floripa. 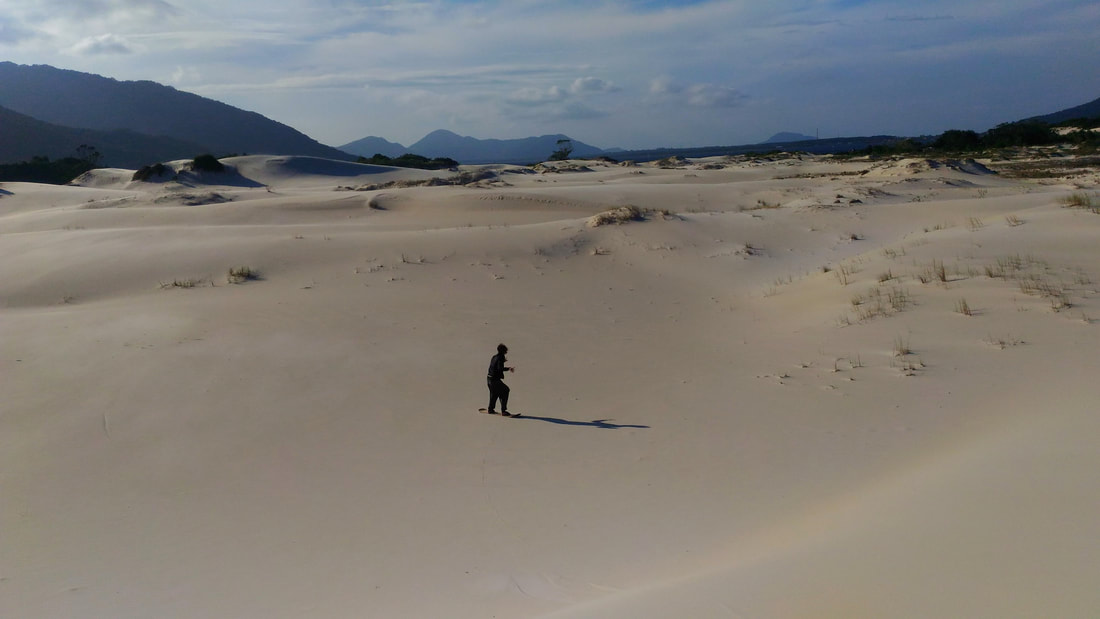 We rented a mellow sitting-down version and a badass standing-up surfboard edition. Guess which one the show-off Leo insisted on riding? Right.

I crushed all my muscles during the numerous high-speed face plants and I ate enough sand to skip lunch, but man, I laughed a lot.

And if you fall often enough, at some point you learn how to stand up and succeed with that one thing you set your mind on (with sandboarding, or with whatever in life).
Talking about good ideas… Flyboarding, you’re doing it! Stop reading, google the nearest flyboarding-outlet in your region and grab that phone right now: you have plans this weekend.
​
All booked? Great, I’m so thrilled for you, because this brand new adrenaline-outdoors-adventure-whatever almost got me peeing my pants out of pure excitement. Or wetsuit, in this case.

It’s not really that easy, they tie some heavy-weight giant to your feet and then drag you along on a rope behind a jetski… and I wouldn’t say that having a forceful stream of water pouring out from under you while you trying to keep your body straight isn’t all that natural either. 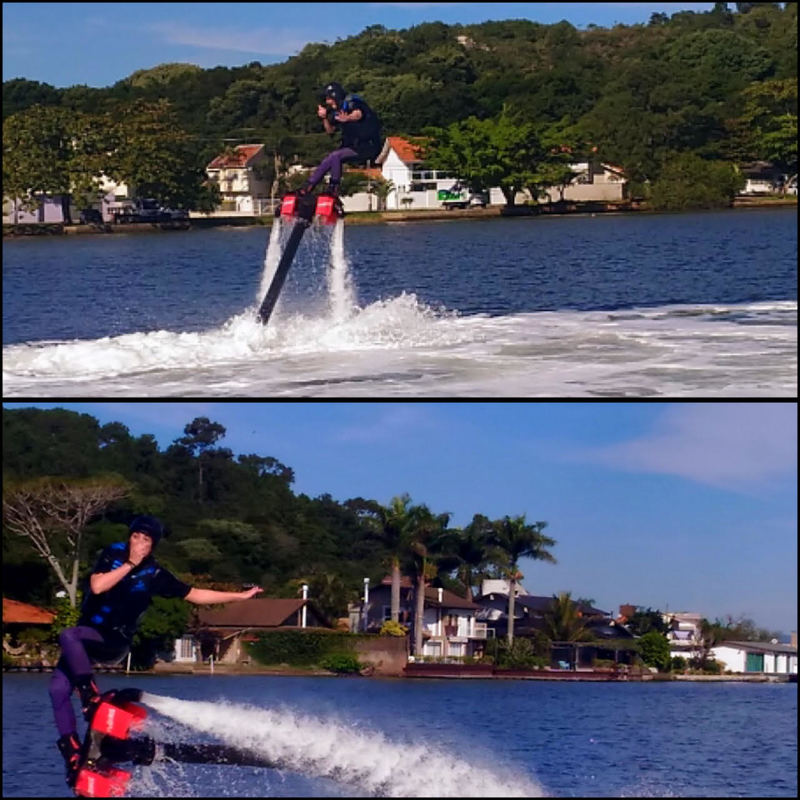 … see?
But once you got it, when the laws of (the in this case rather insane) physics seep through into your behavior and body posture, damn… you’re on top of the bloody world! Or the water, good enough. Whatever lunatic invented this sport should be rewarded with a Nobel Price, is this the place where I can nominate?
Florianopolis. That was one wild ride.
In order to support the travelers’ community, I spend many hours per week to adequately document all information and advices for prospective visitors, accompanied by a (hopefully) entertaining insight into my personal observations and experiences. This service is and will remain free. However, if you voluntarily want to make a contribution and support my travels and thus the creation of new stories and information supply, here is the button you’re looking for:
Donate
Related:
​- Check out Budget Bucket List's FAVORITE HIKING DESTINATIONS worldwide!
- More hiking in Brazil: Cambará do Sul, Ilha Grande & Itatiaia
- Skydiving in Brazil
​- Paragliding in Argentina
- Adventure sports in Ecuador
​​- The 4-day Adventure Sports Jungle Trek to Machu Picchu, Peru
​- Off the beaten path in Peru: trekking in the northern Andes
- Rope-jumping in Lithuania
- Back to nature: a wooden cabin in Los Alerces National Park, Argentinean Patagonia
- Camping and trekking in southern Patagonia: Torres del Paine, Chile
​​- Chilean greenery at its best: Isla de Chiloe
- Golden days in a self-built wooden hut right on the beach in Barra de Valizas, Uruguay
- A 3-day trek through the remotest parts of Bolivia
- Green in Colombia: Minca, Salento & Tayrona National Park
- An overnight forest hike in the hottest part of Paraguay
- The green heart of Uruguay: Minas
​​- The green treasures of Costa Rica: Monteverde, Tapantí National Park & Tortuguero National Park
​- Visiting the national parks of Belize: Belmopan & Sarteneja
- More Brazilian beaches: Ilha Grande & Rio de Janeiro
- Beach hangouts in Uruguay: Cabo Polonio, Barra de Valizas & Punta del Diablo
​- Argentinean beaches: Puerto Madryn & Colón
- Paraguayan beach: Encarnación
- Bolivian beach: Copacabana & Isla del Sol
- Colombian beaches: Palomino, Cartagena, Santa Marta & Tayrona National Park, Colombia
​- Nicaraguan hiking adventures: Matagalpa, San Sebastián de Yali, Mombacho & Laguna Apoyo
- A perfect wooden cabin in the middle of absolutely nowhere: Aukštaitija National Park, Lithuania
- An island with only 59 inhabitants: Easdale, Scotland
​- Hiking the Highlands: Glencoe (West Highland Way) and Isle of Skye, Scotland
- Hiding in the woods: the non-touristy Mols Bjerge National Park, Denmark
- Relax at the beaches of the Algarve, Lisbon
- Spain and its beaches: Barcelona & Malagá
​​- The ultimate off-the-grid beach & surf spot in New Zealand: Port Waikato
​​- Lush, beautiful and with the bluest waters: Northland, New Zealand
​​- Malaysia's tropical scubadive-island: Pulau Tioman
​- Malaysia's hottest hiking spots: visit Taman Negara, Cameron Highlands, Penang, Miri and Kuching!