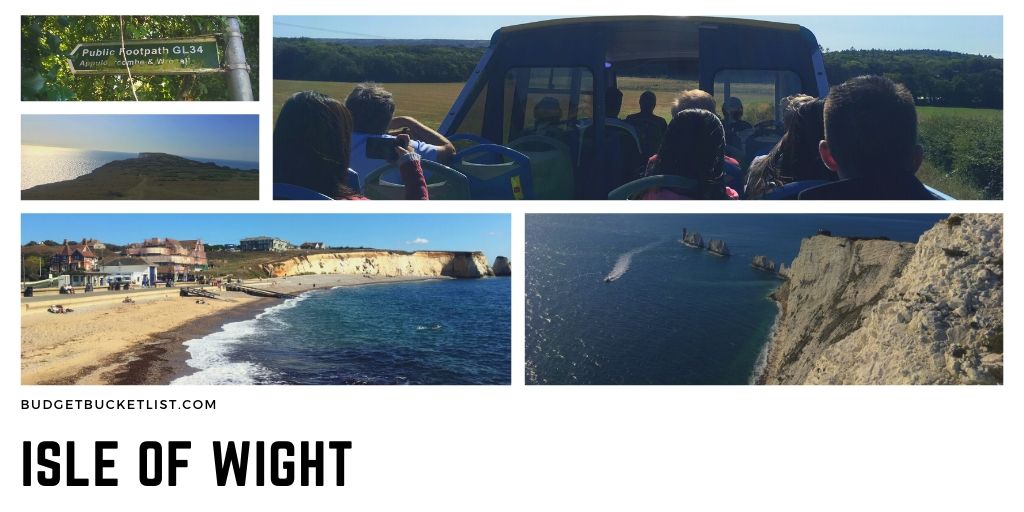 From the sunrise in the East to the sunset in the West,
Just a ferry ride from England is the island that's the best,
Castles and churches, houses with thatch
Country lanes fording rivers - there's no place to match

My chosen home, the Isle of Wight
Sandy beaches and coves, cafes for a bite
Scones, fresh cream and local preserves on the shore,
Fresh fish from the sea - who could ask for more ?

The island attracts musicians, actors, singers and many a poet
You'll fall in love with the place like they did - but before you know it
You're on the return ferry wondering where the time went
Already you're missing Jane Austen's "Island" - that is truly heaven sent.

By: Mark Mordey – Poet of Wight
I don’t know why islands have such an overpowering attraction on me. Every time I spot one on a random map the decision to travel down there is already made before my intellect had the chance to process that piece of information in the first place. This time in England. Isle of Wight, whatever. It was there, so I had to go. Without having a clue what to find there. The most precious state of being to find yourself in, so to say, as everything that comes at you is a surprise, capturing the essence of traveling how it was meant to be.

A train, a bus, a stroll, a hitchhike and a boat later I was there. Where? At Mark’s, a 70-something-year-young, long-bearded, kilt-wearing, cookie-baking juvenile who most probably is the nicest bloke on the entire island, I promptly concluded without having met anybody else. 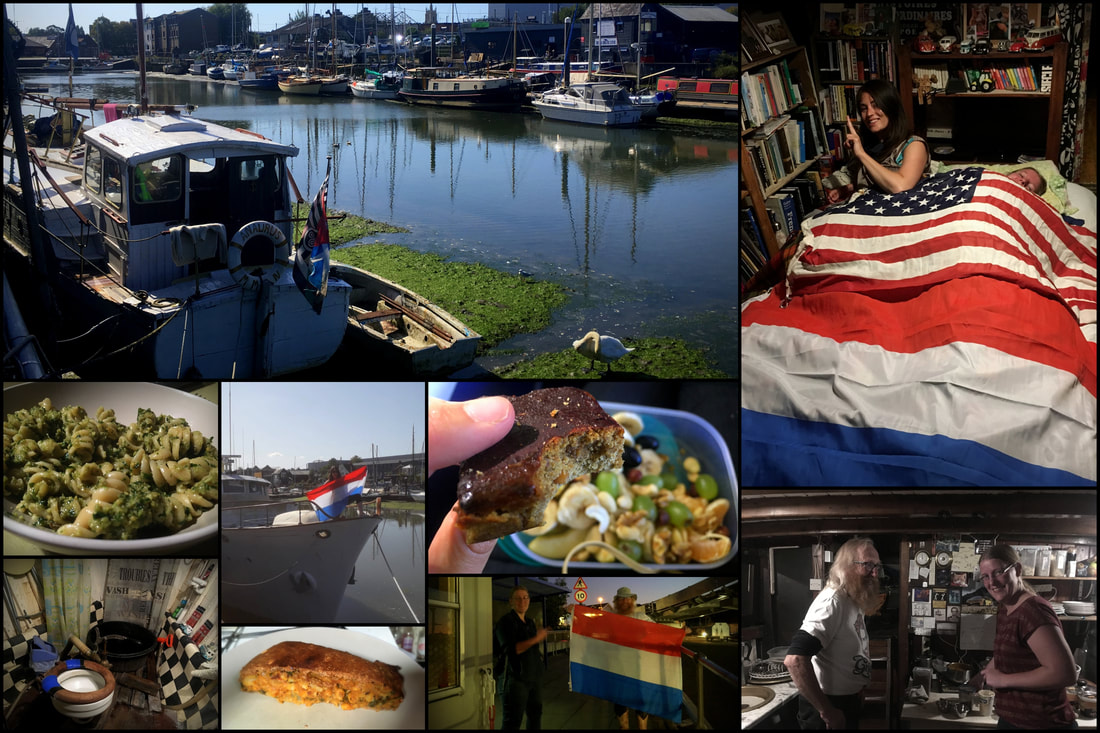 Couchsurfing most certainly is the best way to get to the core of local culture. Sign up here!


Not only does he open up his heart, but also his house-boat on a weekly basis to the wild-minded, following their heart to this island tucked away somewhere down in southern Britain. An island that certainly looks smaller on the map than it actually is, I must add. Which is why you want to know more about…


… Getting Around on a Budget!

In fact, Wight can be considered a proper extension of England, consisting of a conglomeration of cities connected by a rather-smoothly functioning public transport system. Just to get from Newport to Yarmouth, to give you a quick example, already cost me half an hour of bus time, traversing just a small section of the island. Luckily the buses go fast and frequent, reaching even the furthest corners of the island, allowing you to properly explore even with limited time and budget.

Budget tip: The longer you stay, the less you pay! Check out current  24-, 2-day and 7-day bus ticket prices here... Even cheaper is via the Key Card (transferable among people) or the Clickit2Ride App. Find bus timetables and maps here… and if you want to do it well, don’t skip on the open-top “breezer” bus (but mind the typical English weather).
More options include a car (the roads are excellent), train (Ryde Pierhead to Shanklin), hitchhiking (the people are kind), biking… and for the true epicureans: hiking.

* To get on the island to begin with: There are 3 different boat services, the Hovercraft is the most expensive option, Wightlink the slowest but cheapest (Portsmouth to Fishbourne or Lymington to Yarmouth, that is… the Portsmouth Harbour to Ryde Pier Head service is more expensive). Red Funnel is even cheaper, but operates from Southampton, not from Portsmouth. Don’t forget to order a student ticket, it’s not like they’re gonna check ;)

But you’re on the Isle of Wight, so why bother with public transport. Your best mode of transportation is dangling right under you: your own two loyal feet! As there’s indeed no better way to get around than hiking! Luckily, they made it quite easy for you here, as they created no less than 500 miles (805KM) of perfectly maintained trails. In fact, the island is quite famous for having more footpaths per square mile than in any other English county!

The best known one being the multi-day Coastal Path, 70 miles (113KM) stretching along Wight’s breath-taking - you guessed it - cliffy coastline, passing unspoiled nature, fantastic beaches and cultural heritage. Depending on how fast you walk, you can complete the entire thing in about 3-5 days (or just walk sections of it).
Save this article for later!
​Save on Get Pocket | Save in Browser Bookmarks| Save on Instapaper
Recommended day-hikes:


Find more suggestions and downloadable trails on Outdoor Active, National Trust or GPS Routes...
To give your hikes an extra dimension: Geocaching is very much alive here. Download the app to spice up the trails!

​
If you really want to take it to the next level, make sure you arrive during Isle of Wight’s Walking Festival, yearly organized around the first stretch of May. Talking about which:

The Walking Festival is definitely not the only event luring visitors to Wight. In fact, one could argue that celebrations such as the Isle of Wight Festival put the island on the map on an international level. If you need any proof of that bold statement, simply google the last live album of ehm… perhaps… Jimi-fucking-Hendrix, recorded only 3 weeks before his tragic death.

To relive this moment of glory: visit the Dimbola Museum

A complete overview can be found here.

You can’t be reading a Budget Bucket List blog and escape some suggested museums. I LOVE museums, I sometimes visit places just to see a specific museum or check off every single one of them in town (like the 38 of ‘em in Buenos Aires),  I’m a nerd like that. But… I might love guitar music even more (preferably 3 at a time: melodic death metal ahoy!), which is why my top-notch-mention goes to the Dimbola Museum, where music (Jimi!), photography and an old-school play of dress-up are pleasantly combined. Or maybe it’s just because it’s the only one I visited during my far-too-limited time here, a probable possibility. Fact is that if you want to see every single one of ‘em, a month on the island will just do. For a culture kick, head to the Quay Arts Centre, the Postal Museum, the Glass Museum or the Island Artisan. A dive into history? Are the County Museum, Osborne House, Museum of Island History, Brading Roman Villa, Military & Heritage Museum, Ryde District Heritage Centre, Longshoreman’s Museum, Ventnor Heritage Museum, Dinosaur Isle, Bembridge Heritage Centre as well as the Bembridge Fort enough choice for you? Preferring some island-related nautical brass tacks? Head to the Shipwreck Centre & Maritime Museum, Cowes Maritime Museum or the Classic Boat Museum. Or perhaps some useless shenanigans to pass the time? The Lilliput Museum of Antique Dolls & Toys might be just your thing.

Or, if you're simply looking for some freebies… The Bus & Coach Museum as well as the Sir Max Aitken Museum won’t charge you a dime.

The Isle of Wight is all about the mesmerizing English chalk coasts and natural gems. That said, even for a city trip you’re served at your beck and call, as on the island there’s quite the colourful urban collection, with each and every one of them their own unique character. Stroll along the pretty harbour of Yarmouth, or grab a cold one at the charming little beach town of Shanklin, praised for flawlessly maintaining its authentic historical identity. Strut along the classy coastal promenade of Ventnor, submerge in Ryde’s modern city life or explore the greenery bordering Bembridge. There’s a downtown match for every mood.
Besides several days on the Isle of Wight, I decided to spend an extra 2 days in the vibrant harbour town of Portsmouth, the hop-on point of the Wightlink- and Hovertravel Ferry. My highlight was the visit to Wymering Manor (free on Heritage Day), notorious for being haunted by a wide spectrum of spirits.
[More haunted stuff: Appuldurcombe House on the Isle of Wight]
If you have some cash to spare: Splurge with a boat tour along the ‘Solent Forts’ of No Man’s Land, Spitbank and Horsesand – only the names are already a loud and clear YES.
In order to support the travelers’ community, I spend many hours per week to adequately document all information and advices for prospective visitors, accompanied by a (hopefully) entertaining insight into my personal observations and experiences. This service is and will remain free. However, if you voluntarily want to make a contribution and support my travels and thus the creation of new stories and information supply, here is the button you’re looking for:
Donate
Related:
-- Discover England: Bath, Brighton, Isle of Wight, Portsmouth and London!
​- Go Green, Go Scotland: Easdale, Edinburgh, Glasgow, Glencoe / The Highlands and Isle of Skye
- Geocaching Wales: Cardiff & Region
​- In search of Harry Potter: Rowling's hometown, Hogwarts, Hagrid's Hut and a ride in the Hogwarts Express
- Unravel the mysteries of Serbia
​- Europe's best skiing & hiking: Get your ass over to jaw-dropping Switzerland!
​- Budget Bucket List hitchhike trip to... Kosovo!
​​​- Guest Blog 'Kosovo Girl Travels': Travel tips and stories from Kosovo's first and only travelblogger!
- The 3 golden rules to travel Sofia on a budget! & Why you shouldn’t miss out on Plovdiv! [Bulgaria]
- The film locations of Game of Thrones: King's Landing in Sevilla [Spain]
​​- A visit to Lord of the Ring's Hobbiton [Matamata, New Zealand]
​- A housesit next to a Lord of the Rings film location: Port Waikato, New Zealand
​- Citytripping in Denmark's capital: Copenhagen
- Where modern meets classic: Vilnius, Lithuania
​- 8 ways to save money in Vienna, Austria
- Medieval Holland kept alive: Den Bosch & Haarlem
​- Visit Europe's mini-countries: Gibraltar, Liechtenstein, Luxemburg, Kosovo & Wales!
- Discover more Belgium: Antwerp & the most kick-ass Flanders itinerary!- 3 reasons why you need to visit Nijmegen [The Netherlands]
- A capital surrounded by scenic little villages: Lisbon, Portugal
- Spanish citytrips: Barcelona, Malaga & Sevilla
​- German gems: Aachen & Frankfurt am Main
​- Abseiling in Banos, Ecuador
​- Graffiti hotspots in South America: Bogota [Colombia],  Sao Paulo & Porto Alegre [Brazil], Valparaiso [Chile], Asunción [Paraguay]
​- Malaysia's street art hotspots: Penang & Ipoh!
- Hiking Poland's longest mountain trail (550km) with a tent: Glowny Szlak Beskidzki - check the reports here!
- Walk like a pilgrim! 6 weeks on the Camino Frances towards Santiago de Compostela / Finisterre (900km) - check the reports here!​
​- Check out Budget Bucket List's FAVORITE HIKING DESTINATIONS worldwide!