I looked at his fast moving eyes, which rested too long on me. I analyzed his body posture and behaviour and his two friends who didn't seem to be just travelling. I imagined him pulling out a gun and forcing us to hand over all our belongings. Immediately I buried this negative thought as I didn't want to send any incentives into the universe. The bus approached a barricade of police cars that were pulling over all vehicles for a thorough check. The men got out of the bus immediately. Conversations started, conclusions were drawn by locals and I realized my instinct was right again.
​
We passed more of these police- and military blocks, many more. Every half hour a uniformed man (or boy) with a machine gun walked in and out again. I didn’t know if I should feel secure because the police is there to protect me (although Honduran history shows the police used to be the source of all terror, operating as an extension of the totalitarian government executing all opposed ‘elements’), or if I should feel scared as apparently there are many dangers that we need to be protected from. Somehow it's disturbing and reassuring at the same time. 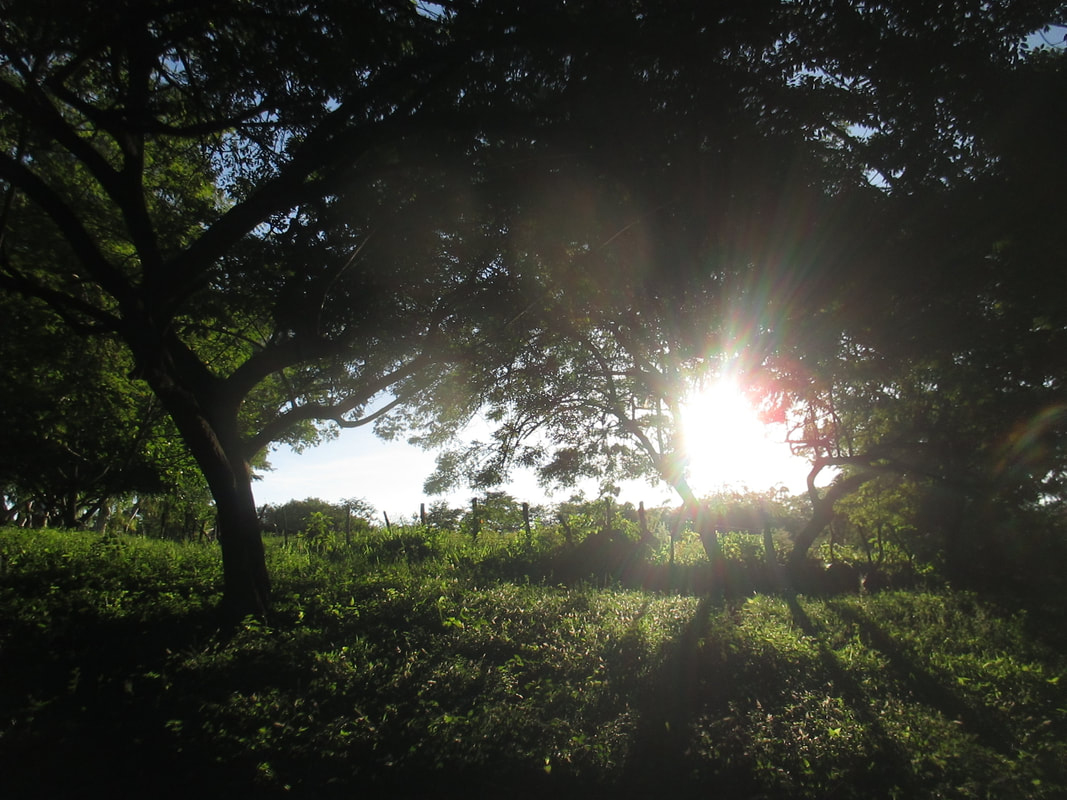 I never take the media a 100% seriously, as it’s usually only one side of the story. The sensational side. Just so that the routine-loving, travel-avoiding, security-craving masses can switch off their TV’s again concluding that only their part of the world is the right one, safely crawling back into their comfort zones. In the bus I realized this negativity and overload of warnings did take its toll on my consciousness though, or maybe it were the frantic warnings of locals underlining the danger of their capital Tegucigalpa. Even though I travelled a year as a woman alone through a continent that’s known to be quite unsafe, now for the first time I felt chills running down my spine and my nerves strangling me. In combination with the fatigue related to the intense heat, mosquito infestation and insomnia, plus the frustration of lack of personal hygiene due to the absence of running water and facilities the past few days, I felt devastated. My comfort zone was so far away that I didn’t even know what it looked like anymore.
​
There are two things you can do in this situation: Cry and feel stressed and depressed, or accept this is the reality you ended up in by making conscious choices and embrace it. I did both. Just like the locals do: They are aware of the dangers existing in their country  but they somehow found a way to embroider this into a peaceful existence, because this is what they know. 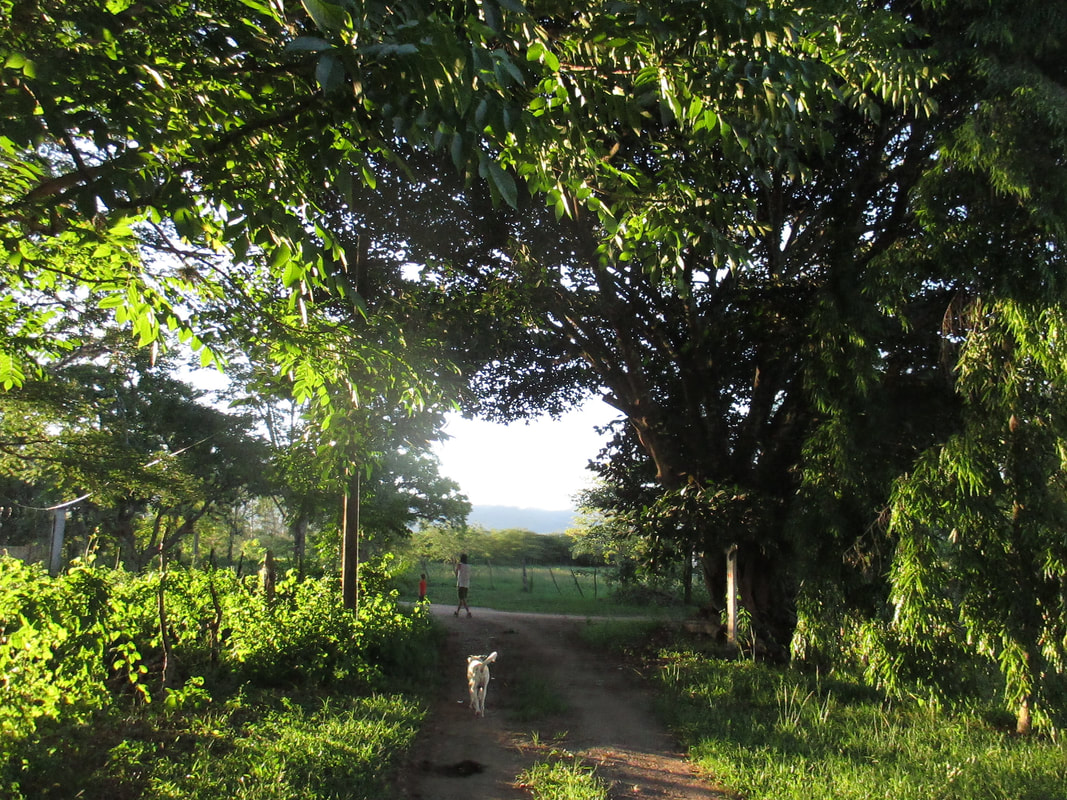 This feeling partly answered the question I had before entering Honduras: “Why do people live here?” The other part of the answer is:

This country is unimaginably beautiful, the people are warm and welcoming and it has it all: Caribbean beaches, islands, access to the Pacific and Atlantic Ocean, history (Maya-invasion, helloooo), mountains, metropolitan cities… 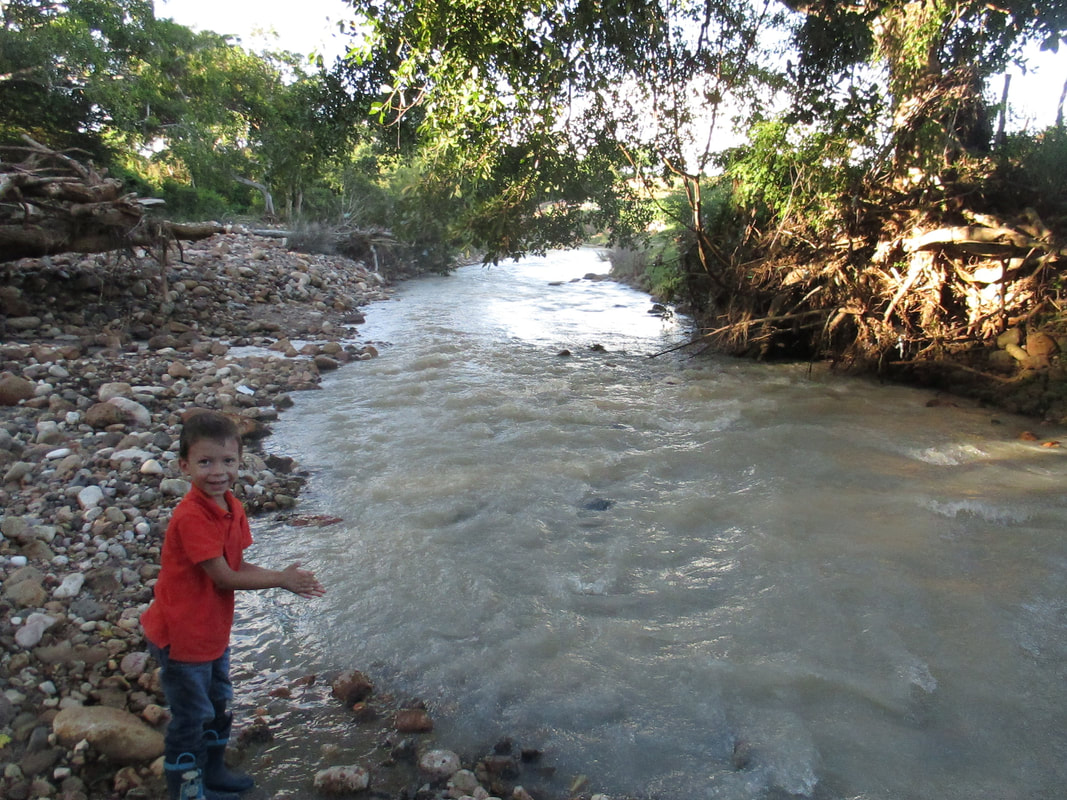 ​The duality of apparent danger and a state of peace and happiness I found back by Manuel, Sarah and their kids Nico and Anika, the incredible Couchsurfing family that opened their doors for me. The moment I sat on the backseat of Manuel’s car, bumping on the dirt road down their house in El Zamorano, the burden of fear fell off my shoulders. Looking at Nico making funny faces at me in the mirror, while his father waved at the neighbours that all appeared to be family, my fear even felt like something completely ridiculous… an experience from another world. This Honduran/North-American family made living in ‘one of the most dangerous countries in the world’ work, perfectly. 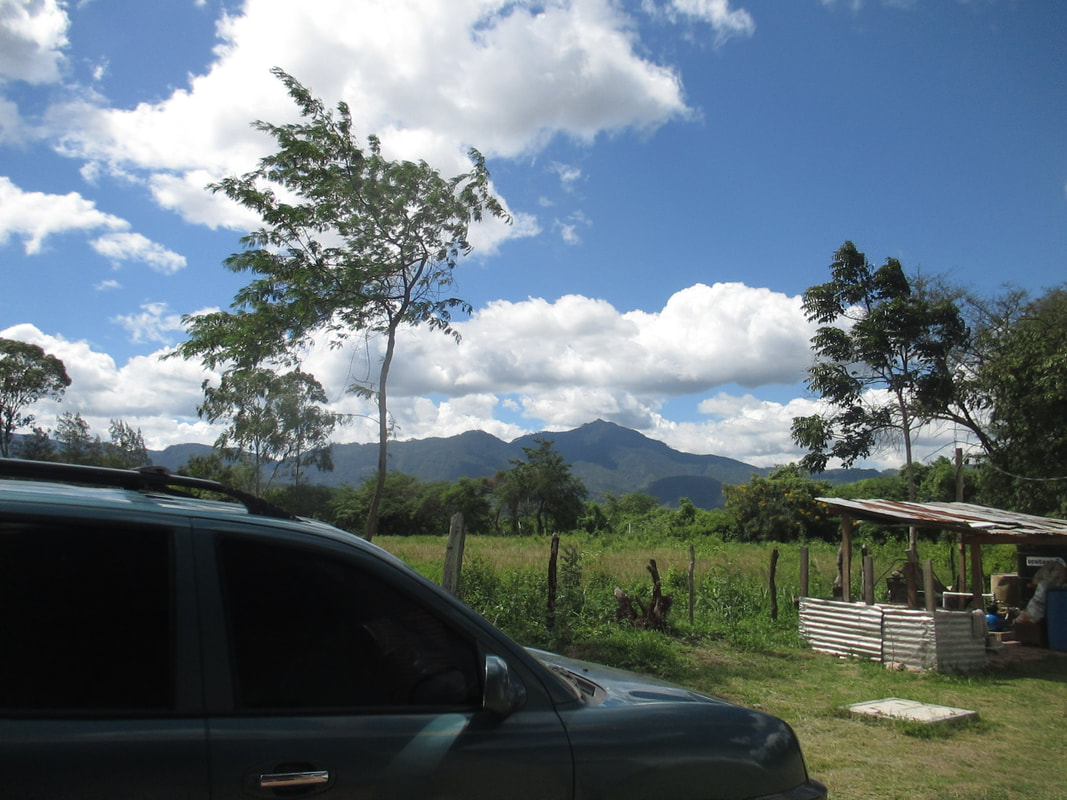 Beyond the outskirts of the capital, hidden away in the green mountains, they created their own beautiful safe haven denying every image the media once created of this country. After a delicious shared meal I took the best shower in months. Playing cards I drank away the best wine I tasted in months, to burry myself into the best bed in months. This was the family time I didn’t have in such a long time, but where I was craving for. Just being here made me recover in all senses, with all senses.
Hiking down to the river we passed the houses of Manu’s father, mother, brother, sister, grandmother and aunt, all living just a stones’ throw away. I breathed in the fresh air, lifted Nico up and realized he has a better childhood than I had. In Honduras. 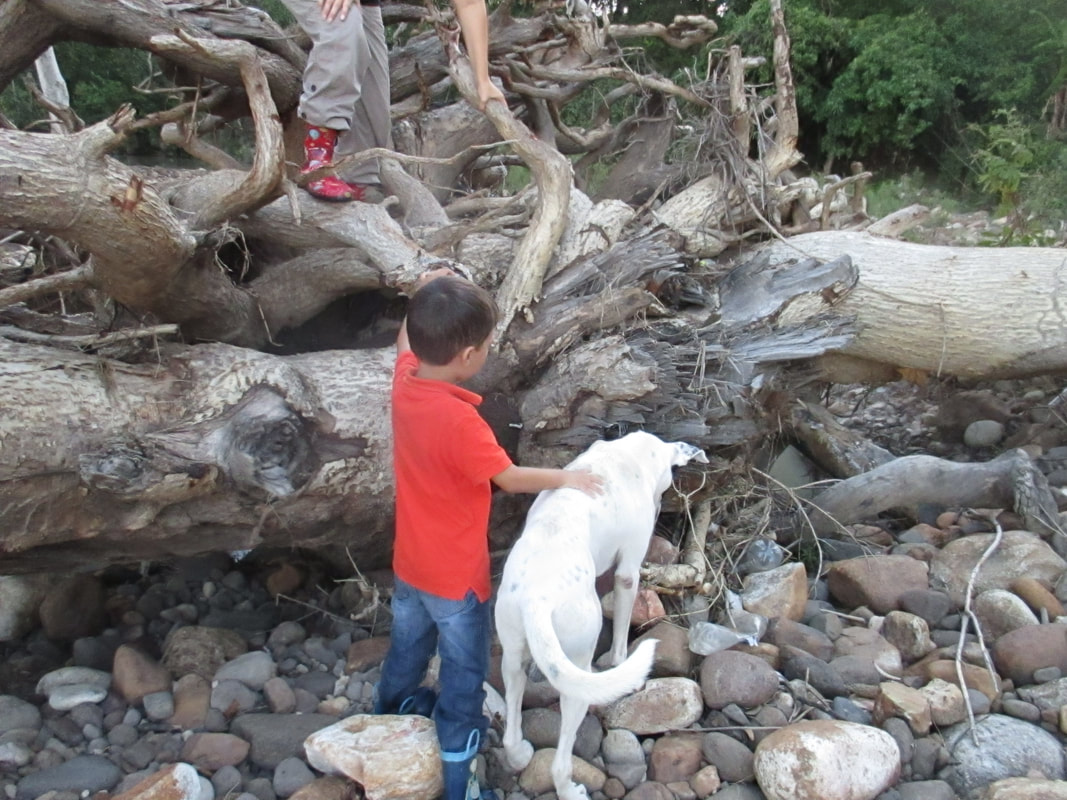 ‘Family’ time was followed up with a useful day in Tegucigalpa. The dangerous Tegucigalpa. As soon as you visit a place and spend some time the danger wears off. I got up when the family got up, which is 5am, and drove away at 6am. First I headed to the Centro de Salud for a yellow fever shot. This simple part of local daily life seemed to be an eye-opening tourist experience for me. Hundreds of women, many pregnant, were waiting in lines that continued on the streets outside. Tumult and the loud zoom of many voices filled up the chaotic rooms. Corridors were dirty, paint flaked off the wall, messy hand-written sign hanged around randomly. This was nothing like the white, sterile, organized structures I know from Europe, Australia and even Thailand. Luckily the vaccine line was way shorter, so after an hour waiting I could enter the small office. When the needle went in I glanced at the broken furniture and stickers on the wall, adjusting my perception of what’s normal. I was surprised I didn't have to pay anything, neither for the vaccine which is valid for life nor for the proof. In Holland I once paid €30 for a 10-year one… in a clinic with crisp white walls. 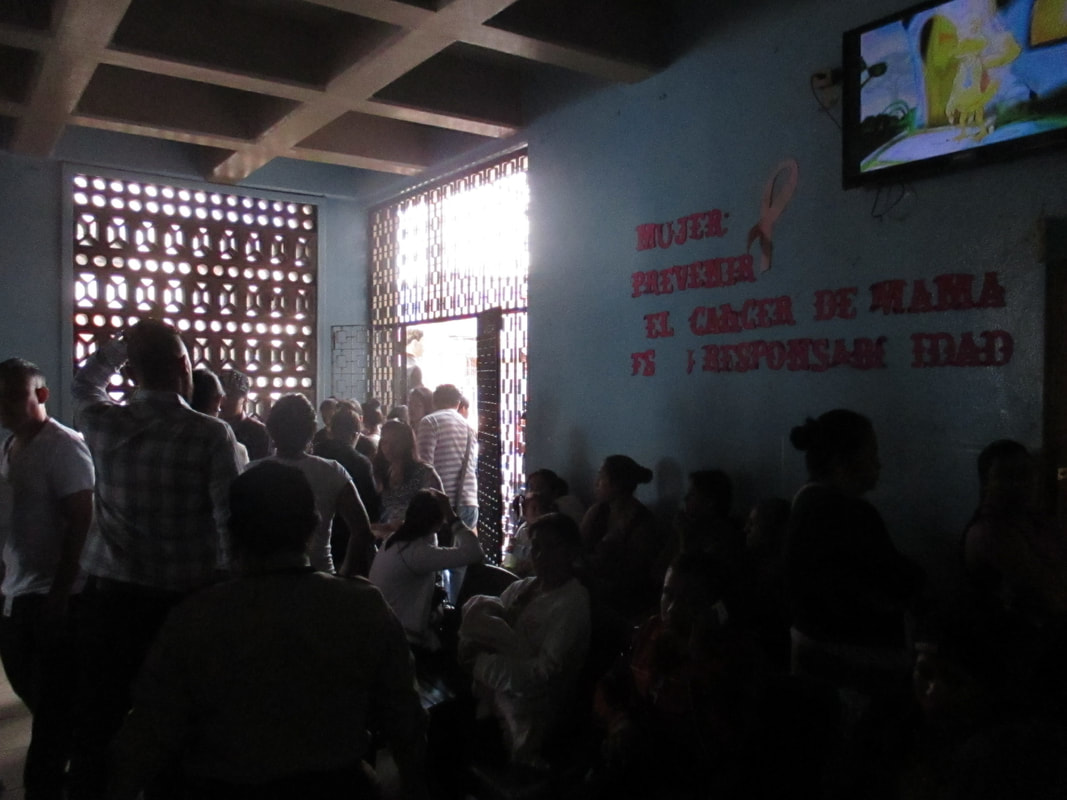 Next: Migration. After all the corruption at the border I had to deal with, I assumed the 30-days visa was a rip-off too. I quote myself: “I learned about the C4-agreement between Nicaragua, Honduras, Guatemala and El Salvador. It is basically invented to facilitate movement of people and goods between these countries, for locals. For tourists it means you get only a 90-days visa for all 4 countries, which sucks for long-term travellers and volunteers like us. Your options are paying for an extension in one of the capitals, or exit one of these countries for a few days and re-enter (what I will do in Belize).” As I was about to head a month to Roatán to volunteer at a school to teach kids with AIDS, I had no other choice but to extend it. I had to invest $20 and time, a lot of time. First I waited in line to enter the Migration building. Then I waited at the desk (and as this is Central America you're likely to wait at two incorrect desks first, due to insufficient information supply). Then I got a form and had to pay, so walked to the bank right next to it and… waited. Then I got back to wait at the desk again. And then I waited a few hours until they're done. In short: Bring something to read.
Back to El Zamorano, the contradiction of Tegus. Because I loved it here too much to leave I didn’t and stayed another day, just enjoying being there and pretending to have something that resembles a normal life somehow… in a life were abnormal is the normal norm.
In order to support the travelers’ community, I spend many hours per week to adequately document all information and advices for prospective visitors, accompanied by a (hopefully) entertaining insight into my personal observations and experiences. This service is and will remain free. However, if you voluntarily want to make a contribution and support my travels and thus the creation of new stories and information supply, here is the button you’re looking for:
Donate
Related:
- Maya ruins in Copán, Honduras
​- A complicated border crossing: Choluteca, Honduras
- Volunteering in a school aimed at HIV-affected children from the slums: Roatán, Honduras
- Beach bums and Garifunas: Tela, Honduras
- Off the beaten path in Peru: trekking in the northern Andes
​- Outdoors lover? Head down to Ecuador and don't miss Banos
- What tourists skip: San Sebastián de Yali, Nicaragua
- An island with only 59 inhabitants: Easdale, Scotland
- Free healthcare in Argentina
- Private healthcare in Brazil
- Getting hospitalized in El Salvador
- A hospital experience in Tegucigalpa, Honduras
- Food poisoning in Peru
​- Why it's wise to have your yellow fever shots when travelling in Central America
​- A little sneak-peek into North Korea!
​​- The psychological start of a journey... in the city of Marrakech [Morocco]
​- Discover Romania's enjoyable cities: Bucharest, Brasov and Cluj Napoca
- Serbia at its greenest: hiking Pirot!