“Why are you escaping your country, don’t you love it?”
​
When people find out I’ve been travelling for 5 years straight, one of the first assumptions made is that I therefore must hate where I’m from. The same conclusion is usually drawn when I clearly state I am definitely not a patriot (and, in fact, think that the whole concept of nationalism is the easiest, most simple-minded way to empower those seeking pride and privilege in something they literally did nothing for but popping out of a uterus on a designated stretch of soil). I leave in the middle if it’s worth my, and therefore your, time to debate the indebatable, but fact is that I am drawn to any place that vibrates with both external and internal beauty, captivating history and/or cultural curiosities. Qualities that sum up the modest-sized nation of The Netherlands, the place where my birthgiver’s particular uterus happened to be located in 1987, on the 5th of August at 6PM. 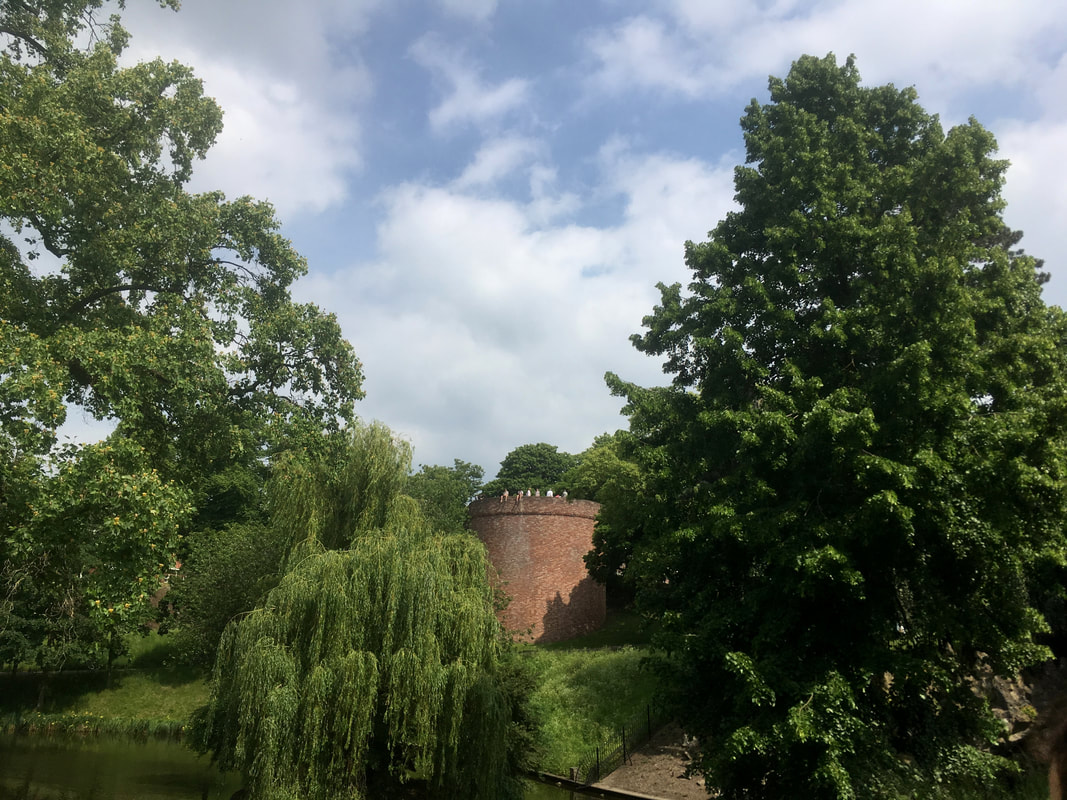 Too busy to read now? No problem, save it for later!
​Save on Get Pocket | Save in Browser Bookmarks| Save on Instapaper
Rationally speaking, you’d think that living about 26 years (on and off) in a country not bigger than 42.508 km² should give a rather thorough idea of what the place is like. It certainly does, but there are always new things to discover. Despite its limited surface area (in perspective: 186 times smaller than Australia / 67 times smaller than Argentina) the country contains 17,08 mln inhabitants (only 0,44 times less than Australia / 1,6 times less than Argentina). All these inhabitants live in cities and villages with basically no space in between them… where one ends the other starts. And every single one of these has their own culture and dialect (some dialects are so distinct they are languages on their own, like Frisian and Limburgs, which aren’t understood by non-speakers), highlighting the enticing variety of this ini-mini country.

Yes, you’ve heard of Amsterdam (during my travels I learned that a shocking number of people think Holland is Amsterdam’s capital). You’ve heard of Rotterdam and probably The Hague. If you really did your homework – or love soccer – you might even know Eindhoven… but do you know The Netherlands’ oldest city: Nijmegen? Because I think you should.

3 Reasons Why You Need To Visit Nijmegen 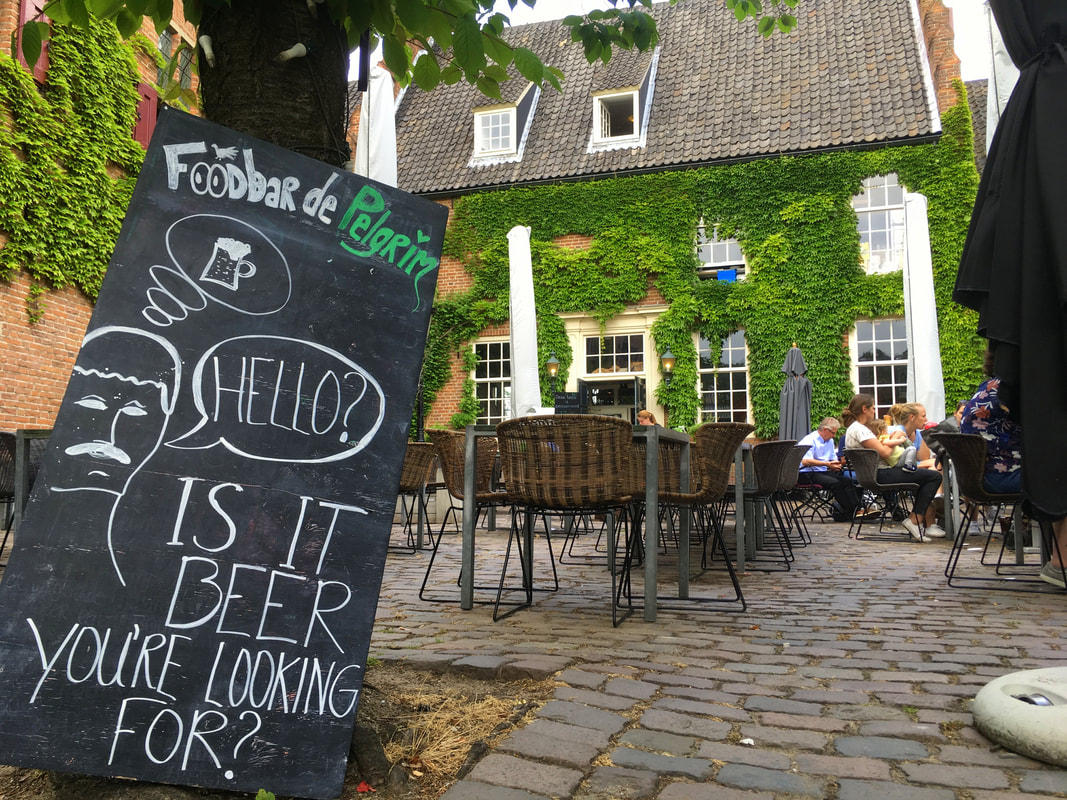 I love summer. Not because it’s the only season you’re not freezing your arse to your bicycle’s saddle, or aren't swept off your bike altogether by the consistent winds and downpours that spell out the glories of ‘Dutch Weather’… but because of music. Throw a glance at your iPod and chances are high you’ll find some Dutchness seeping through your playlist: DJ Tiësto, Armin van Buuren, Fedde le Grand, Junkie XL, Afrojack, Vengaboys, 2 Unlimited, Eddie van Halen, Golden Earring, André Rieu, Candy Dulfer… or in my case: Nightwish (Floor Jansen), Epica, Gorefest, Ayreon, Textures, Carach Angren… the Dutch appreciation for the melodic arts brings forth as many talented artists (one more than the other) as it attracts foreign acts to their stages. The one element I miss the most when travelling is - except of my exquisite cat Kartoffel - the luxury of being overwhelmed with choice when it comes to kick-ass music festivals. It’s one of those things you realize was there when it’s gone.

While Amsterdam might win it in quantity, Nijmegen definitely takes home the price for the most exhilarating variety. From satanic metal to silent disco, and from jazz to African djembé. Its inarguable winner that keeps luring me back in year after year (whenever I’m situated within the country’s borders):


Other music festivals to plan your Nijmegen visit around: 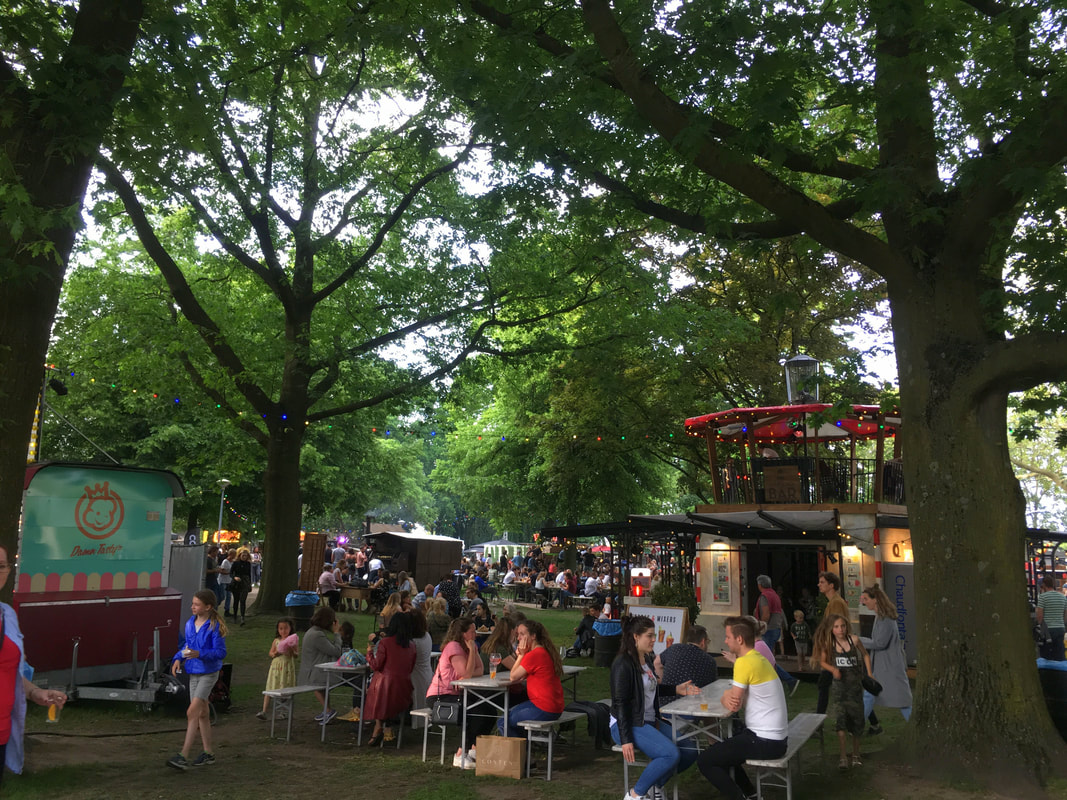 The relationship between Dutchies and their bikes doesn’t need any further introduction. However, did you know we hike, bro? Surprising, yes, as we don’t have any mountains. We do have valleys (the country’s lowest point is 6.76m under sea level), for what it’s worth. But whatever we don’t climb we compensate in distance. Our country might be small, but we walk the shit out of it. And the biggest hiking event, nation-wide, takes place in the city of Nijmegen: The Nijmeegse Vierdaagse (also one of the biggest annual parties in town – don’t miss out). Every year in July around 45,000 fanatics walk 30, 40, or 50 kilometres every day for 4 days in row. And if the first thought shooting through your head is a clear ‘who the hell does that?!’… People are lying in line to subscribe; a lottery system is in place to select the lucky ‘few’.

Missed out? Worry not, my comrade in hikes. There’s plenty of nature to traverse, all within and along the green city of Nijmegen. I name an Ooijpolder, I name a Gelderse Poort: It’s eco, it’s free and it’s accessible all year 'round. Off you go.
3) Because you like history

You’re not in Nijmegen. You’re in Noviomagus.

I clearly remember the first time my high school dragged me to Nijmegen… while my friends from other classes had fun fieldtrips to zoos and amusement parks, we Greek-and-Latin-nerds had to analyze potsherds of ancient Roman vases in the Museum het Valkhof. I wish I could travel back in time and tell the angry teenage version of me that there will come a time that I envy these free-entry’s to actually-pretty-kick-ass-museums (and that future-me is a vegan that would be embarrassed of every prior zoo visit anyway). Because, bloody hell, isn’t Nijmegen the ultimate wet dream of history enthusiasts?!

First mentioned in the 1st Century BC, the location of Nijmegen served as the prime spot of a crucial Roman military camp, providing excellent strategic value by providing views over the Rhine and Waal river valleys. After the Romans destroyed the Batavian village ‘Oppidum Batavorum’ due to their short but fruitless rebellion, they built another even bigger camp where the Legio X Gemina was stationed (later re-stationed to Vindobona – nowadays Vienna). In 98 the settlement received Roman city rights, making it the country’s oldest city, and in 104 Emperor Trajan renamed it to ‘Ulpia Noviomagus Batavorum’… Noviomagus for intimae. The Romans liked it so much they hung around until the 4th century, until it changed hands to the Frankish Kingdom and lads such as Emperor Charlemagne, Louis the Pious and Henry VI. It never really got boring though, as Nijmegen played a crucial role in (among others) The Dutch Revolt of protestantism against the catholic rule of Philip II of Spain, escalating in the Siege of Nijmegen (1591) and other exhilarating little uprisings.
​
Elements of history that are still clearly visible today, despite the heavy bombing by American forces during WWII (our western buddies confused Nijmegen with the German city of Kleve… let’s just say that education and geographical knowledge has never been USA’s strongest asset). I think you should go and check it out. 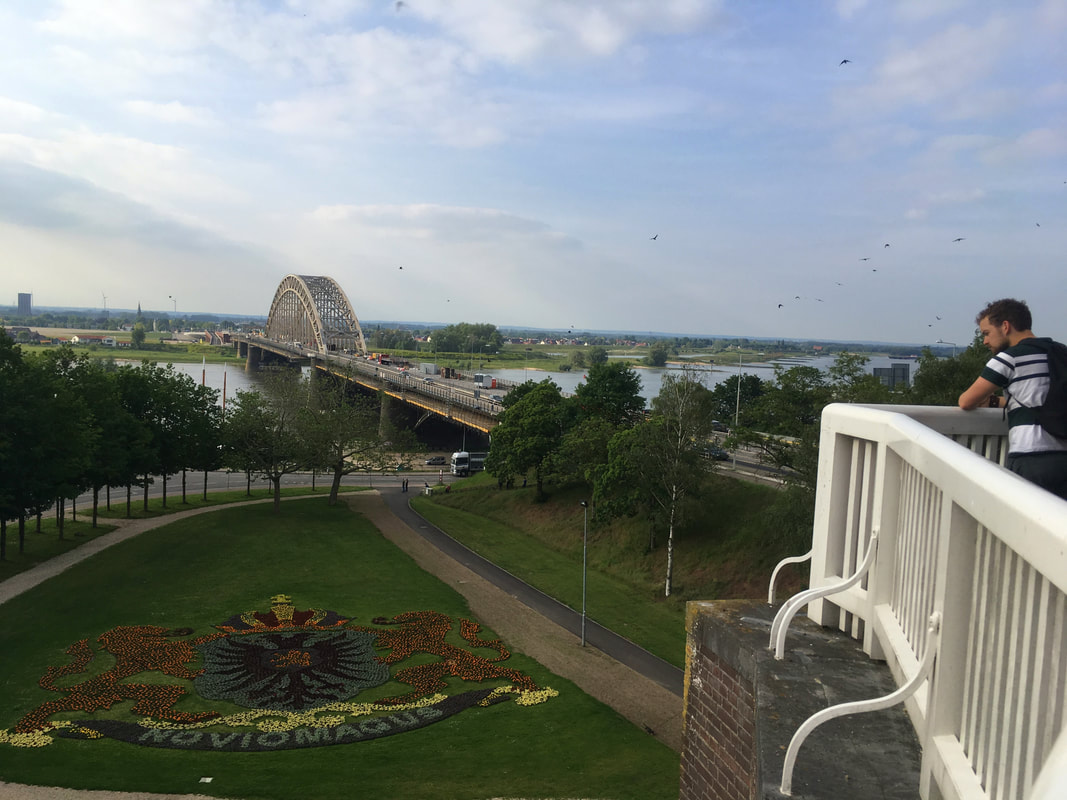 If you want to hear more and in much greater detail… meet this guy Jesse, Nijmegen’s prime history-expert who might want to guide you around if you shoot him a friendly message via Couchsurfing.
3 reasons why you need to visit Nijmegen…

… and 3 alternative places where you can spend the night:

Previously to screw the government and their land taxes (You wanna tax the land I build my house on? Fine, I'll build it on water, you dicks!), currently because it’s just pretty damn hipster to have a floating house… This is a excitingly unique accommodation opportunity when visiting The Netherlands – Land of Water. 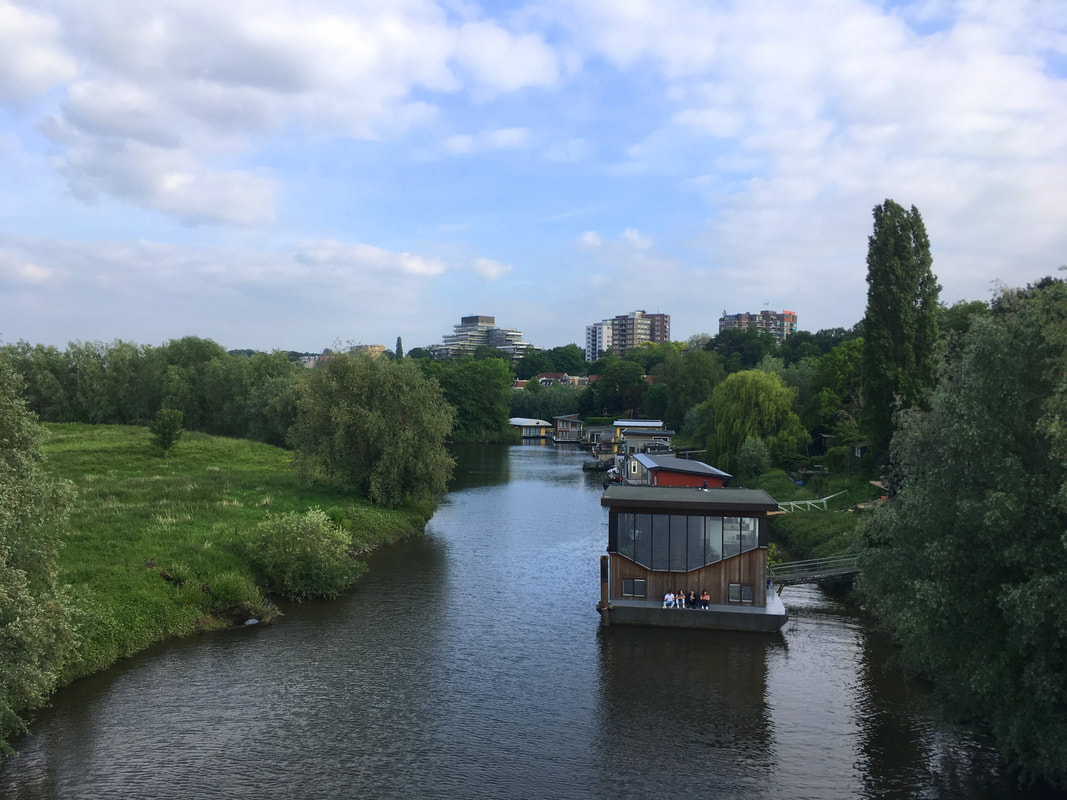 You know squatters, right? As the freebie-loving Dutchies really took it to the next level when it comes to seizing free vacant property, in 2010 the Anti-Squat Law came in place… which is basically squatting-against-squatting with thumbs up from the government (incl. some monthly rent – be it ridiculously low). This is so common in Nijmegen that both times I spent a couple of nights in a Couchsurfer’s house in this city it turned out to be an (anti-)squatted building. First in a seized factory-building-turned-into-artist-collective called Paraplufabrieken, which you should totally check out, the second time in a gigantic empty office building inhabited by two young men… each having their own wing.
3) A Private Bed-in-Cinema

Comparable with the squatting-situation, we can just assume that people had sex in cinemas on such a scale that they just tried to internalize it in the system somehow. Hence, ‘Bed & Bios’. A bed in a cinema (you can spice it up with a jacuzzi and/or sauna package – or 2 Dutch Gazelle bicycles, whatever rings your bell). Let just hope they wash the sheets on 90 degrees.

Writer's pick​: The Dutch market leader of travel gear and outdoor clothing is Bever. Get a 365-day free return policy, free shopping (from €30) and special repair & maintenance service via this link!
In order to support the travelers’ community, I spend many hours per week to adequately document all information and advices for prospective visitors, accompanied by a (hopefully) entertaining insight into my personal observations and experiences. This service is and will remain free. However, if you voluntarily want to make a contribution and support my travels and thus the creation of new stories and information supply, here is the button you’re looking for:
Donate
Related:
- Medieval Holland kept alive: Den Bosch & Haarlem
​​- Top-5 places to visit in South Limburg [The Netherlands]
​- 10 typical Dutch celebrations you shouldn't miss out on
- More metal in Holland: Into The Grave Festival in Leeuwarden
​- Metal in Brazil and Argentina: Festival Maximus
- Relive history in Austria's majestic capital Vienna
​- Discover more Belgium: Antwerp & the most kick-ass Flanders itinerary!
​​- German gems: Aachen & Frankfurt am Main
- Unravel the mysteries of Serbia
- More European city-tripping: Copenhagen [Denmark], Vilnius [Lithuania] or Glasgow [Scotland]
- Where city and nature meet: Edinburgh, Scotland
​- Europe's best skiing & hiking: Get your ass over to jaw-dropping Switzerland!
​- Budget Bucket List hitchhike trip to... Kosovo!
​​​- Guest Blog 'Kosovo Girl Travels': Travel tips and stories from Kosovo's first and only travelblogger!
​​​- History preserved: Time capsule of Romanian culture Maramures
- The prettiest historical town in Romania: Sighisoara!
- The 3 golden rules to travel Sofia on a budget! & Why you shouldn’t miss out on Plovdiv! [Bulgaria]
​- Discover the splendours of Turkey: Istanbul on a Budget & Reasons to visit Edirne