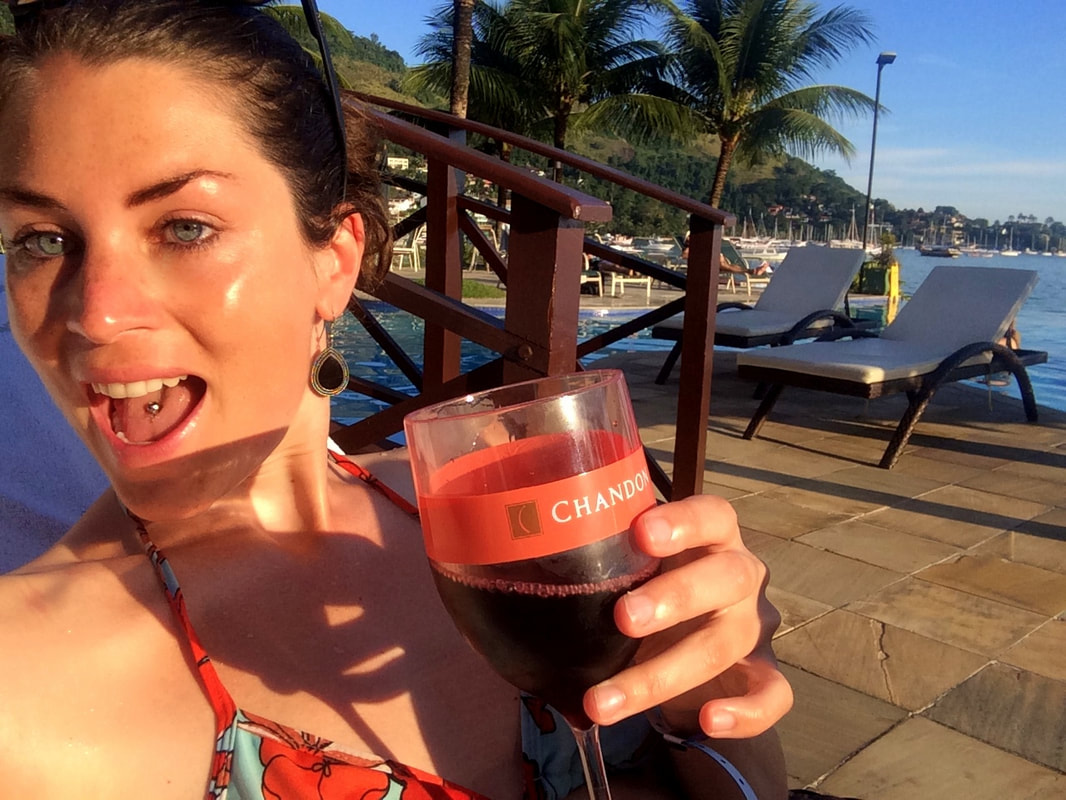 It’s always good to know local people. It’s even better if those people have a car, way too much money and are more than eager to show their country to you. Enter Wesley, a reader of this blog who not only had decided to treat me on a nice vegan dinner in São Paulo (twice), but also decided to buy me a skydive and as such fulfill one of my long cherished dreams... And while he was at it he also took a few days off from work to drive all the way to Angra dos Reis to pick me up after my Ilha Grande trip and show his favorite parts of Brazil: Trindade and Paraty. Hard to say no to such things. 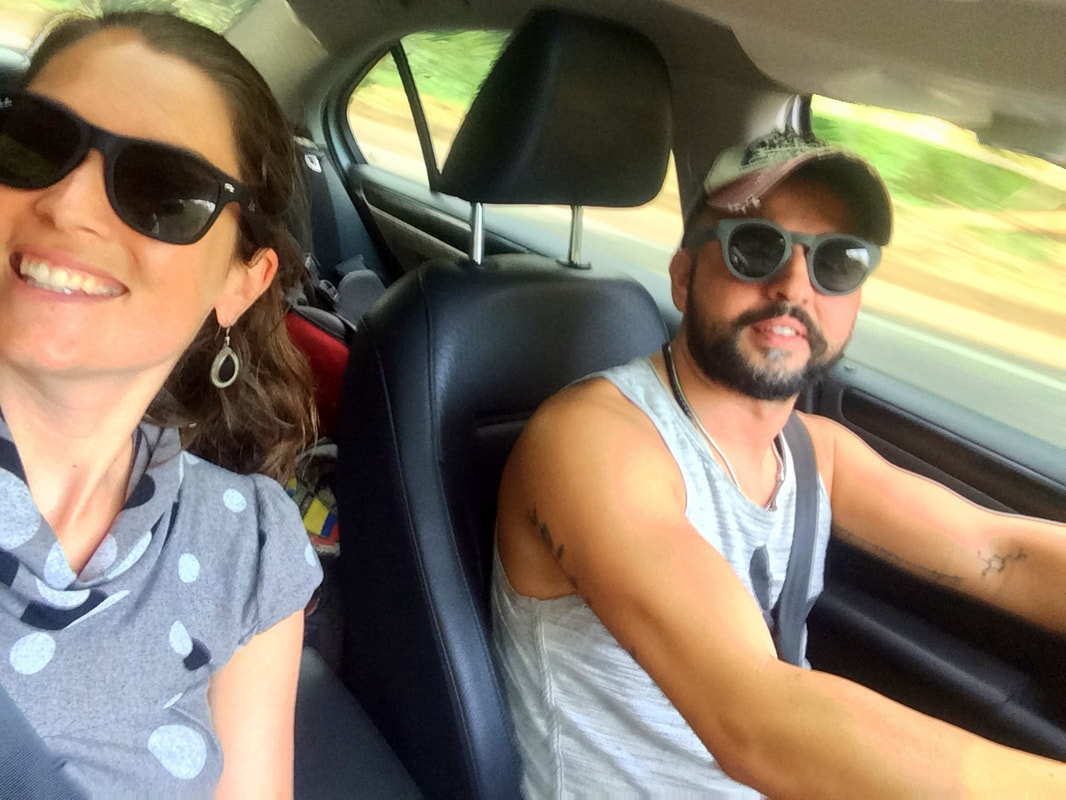 I got off the boat in Angra dos Reis at about midday. I looked left, I looked right: No Wesley. When I grabbed my phone I saw a few missed calls and messages. He was going to be late, but as he didn’t want me to get bored he booked me into a 5* hotel so I could chill, get a massage and dive into the infinity pool. Oh and I should order some wines and caipirinhas too while watching the sunset and get some dinner in the restaurant, this vegan pesto-pasta was supposedly quite the smash-hit. Don’t worry, my bill was on his credit card.

Yeah, I also don’t know what’s wrong with that guy, but…

Sometimes it’s better not to question the good stuff that’s happening to you. 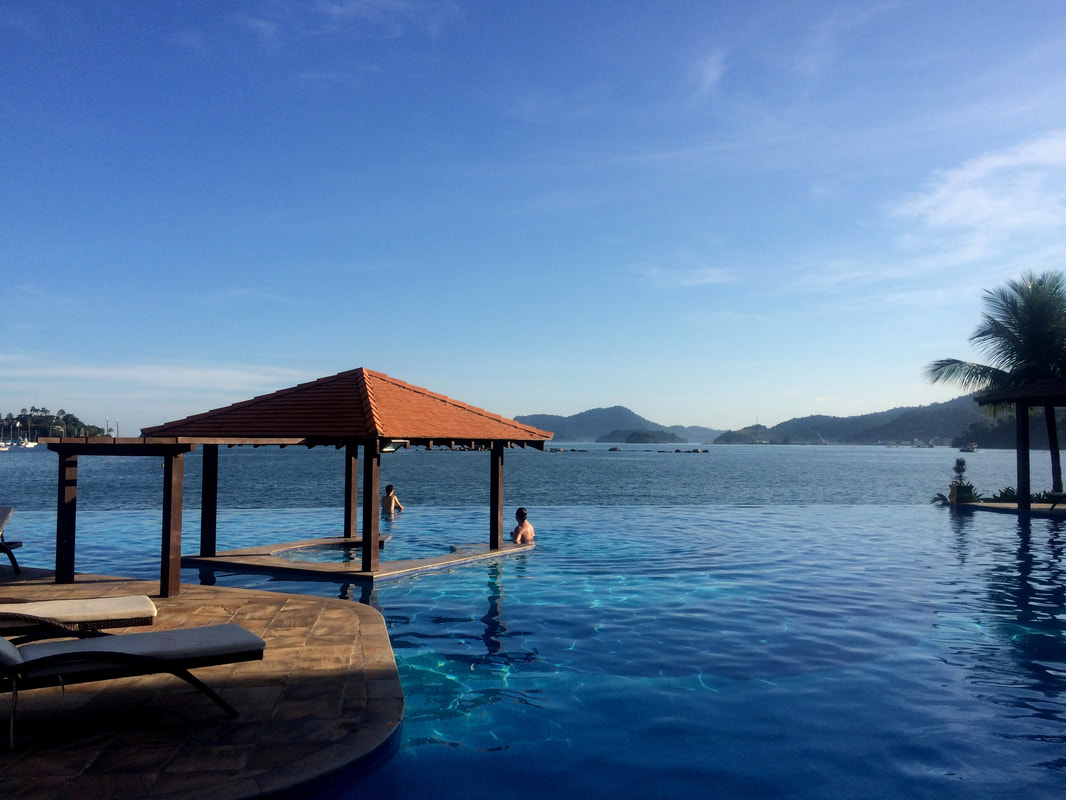 No, in case you already drew your conclusions: I didn’t sleep with the man and no, this didn’t make me want to. Fact is that I always felt more attracted to (financially) poor men, as they can’t afford to let their identity or status rely on that shallow thing called ‘money’ and are therefore more pure and often creative. I tell you something, I find it quite the turn-off to have a man supporting me, I can perfectly take care of myself thank you very much. . . But once I made this clear Wesley smiled and said he’s been a broke traveler for over 10 years, unable to afford anything. “I know how it feels when people help you out when you least expect it. And I know you’re doing the same to people that have less than you. This is your time to see the other spectrum of traveling you never write about, bucket list without the addition of ‘budget’, can you do that for me?” Ok, I guess I can manage. 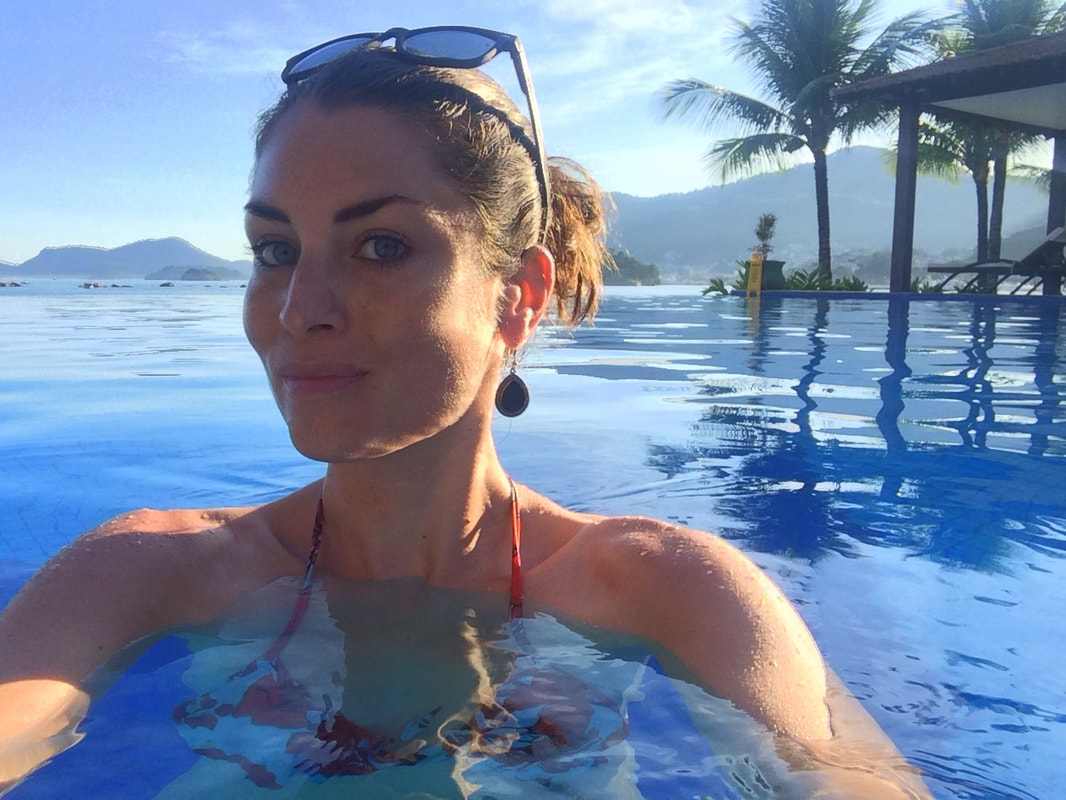 I didn’t tell him I was still about 4km away from the resort, I was afraid he would order some limo-service for me to get me there. Instead, I felt like hiking all the way over there in the burning sun, I’m more comfortable with a little suffering.

My entrance was remarkable, to say the least. While fancy sports cars raced by I knocked on the cabin of the security guard, sweat pouring down my face. A little cautious he asked what I was doing there. “I have a reservation”, I smiled. Confused he walked back into his office to make some phone calls, referring to me as a ‘gringa muito particular’, to find out that I indeed wasn’t mistaken. After a short fight with the bellboy about me not wanting him to carry my filthy backpack on a golden carriage, I completed my check-in, stared at by both guests and staff. I guess the ripped metal-shirt with flip-flops is a look to get used to in high society.

I stared at the price list and concluded that one night here costs as much as I spend in an entire month traveling, all expenses included.

Holy shit, some people know how to flush money down the drain! And usually that are exactly the people asking ‘how I do it, traveling for so long’. 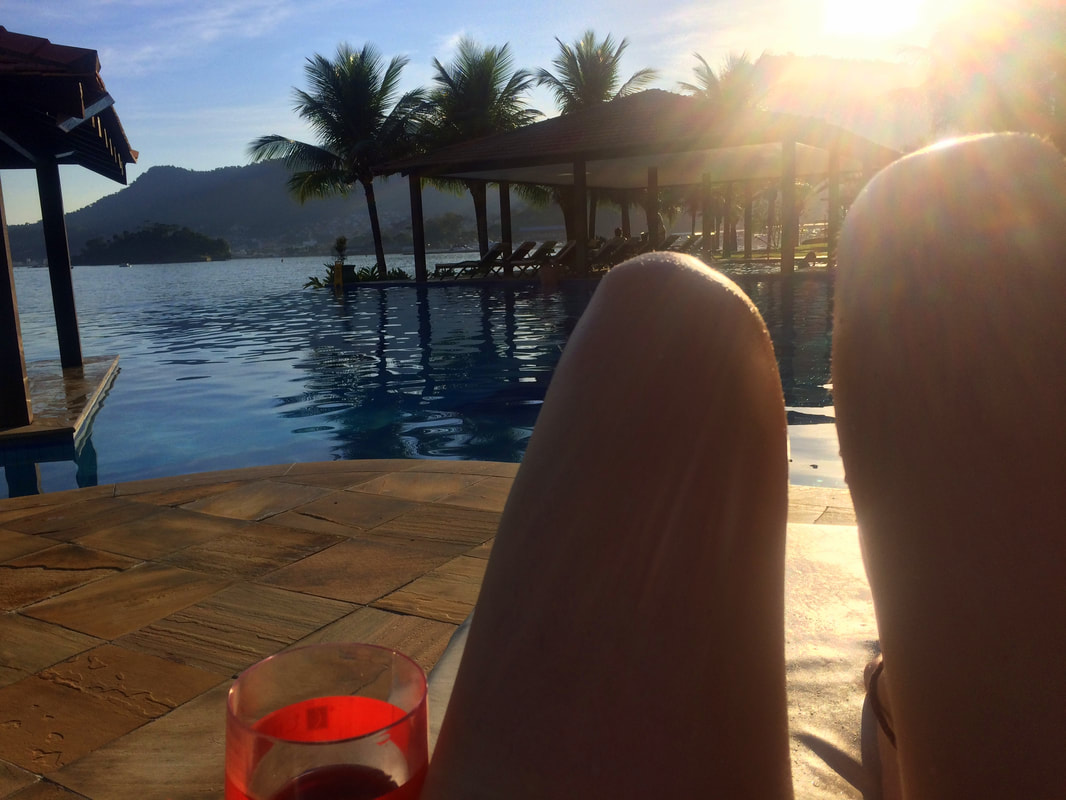 That said, that massage came straight out of heaven, that food almost made my taste buds orgasm and one shouldn’t underestimate the art of drinking too much alcohol while floating into an infinity pool overlooking the entire harbor of Angra dos Reis. I decided that whatever was happening, however strange, was nothing to complain about.

As Wes only arrived at midnight we decided to spend the night in this not-so-modest lodging (read: that bedroom was bigger than any apartment I ever rented – and I had it all to myself!) and continue the next day to this beach town called Trindade.
With that all is said about this destination: a beach town. Is that a bad thing? No, absolutely not. Especially if you like beach it isn’t, I would say.

And if you’re, let’s say, into vegan food. Because man, that muqueca de verduras is a treat! The cook said he couldn’t keep his eyes off me while I was eating, he never saw anyone stuffing her face which such honest happiness. What can I say? I might not be seduced by money, but feeding me is always a good start. 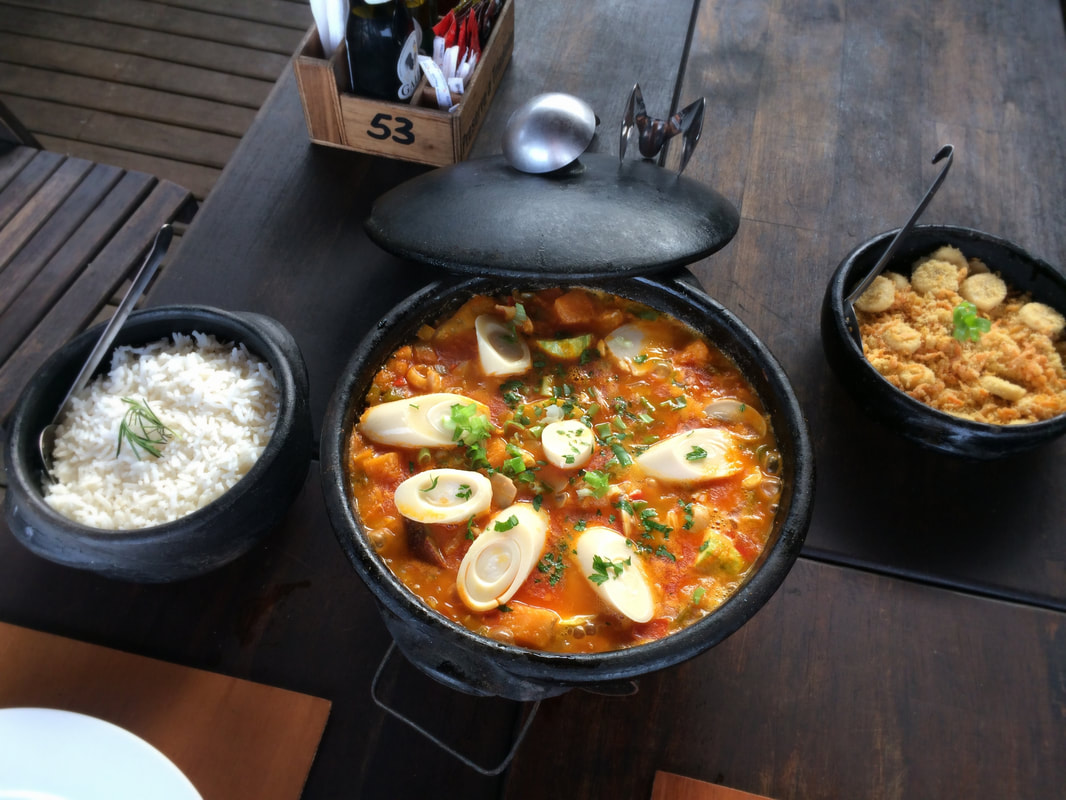 After a delicious salty and windy afternoon we boarded the car again, as I needed to explore more of Brazil now I was on this specific spot of the globe once in a lifetime. Paraty is an often mentioned destination by local and foreign tourists. With that information you immediately know what to expect: a very touristy place. 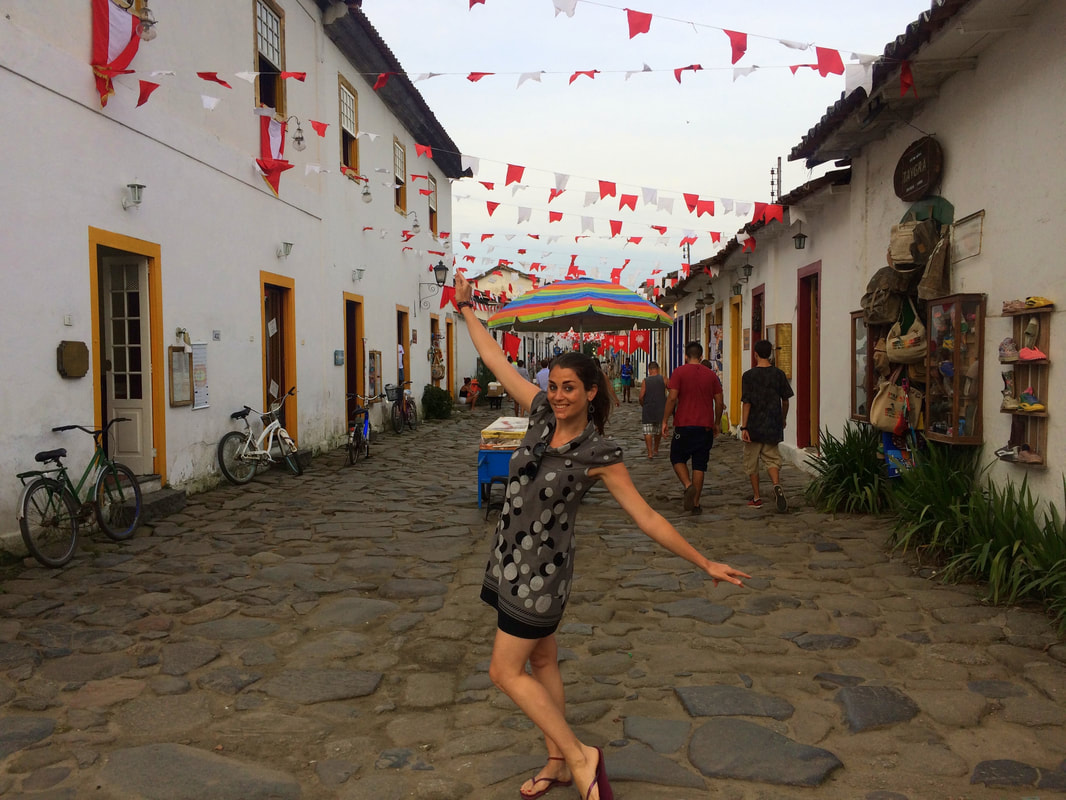 Too touristy, if you ask me. The other side of the story is that there must be something to see then, if entire population groups make it down there. And there sure is. In the area that was initially inhabited by the Guaianás Indians (who called the entire region Paraty: “river of fish”), the Portuguese colonialists established this town in 1597 (and formally in 1667). After the discovery of the abundant gold mines Paraty became an export port to transfer the gold from its righteous owner to the oppressor’s country Portugal. Later on, when some wise men realized it wasn’t so cool to exploit a country that isn’t theirs and shatter the lives of millions of Africans by forcing them into slavery, Paraty acquired its richness by the export of coffee and later on chacaça (the basis for the famous caipirinha). All of that and more is to be found back in the current streetscape of this overly colonial and picture-friendly hamlet.
​But half an hour later I was out. Metallica slamming out of the speakers, engines rolling... it was time for the real adventure Wes had planned for me (stay tuned for that one!).
As soon as I belong, it’s time I disappear.
In order to support the travelers’ community, I spend many hours per week to adequately document all information and advices for prospective visitors, accompanied by a (hopefully) entertaining insight into my personal observations and experiences. This service is and will remain free. However, if you voluntarily want to make a contribution and support my travels and thus the creation of new stories and information supply, here is the button you’re looking for:
Donate
​Related:
​- ​Where to go to next? Check the Brazil Page!
- Skydiving with Wesley in Resende!
- More fancy-pants traveling: Couchsurfing in a mansion in Jujuy, Argentina
- Couchsurfing in a penthouse in Panamá City
- Relaxing in a nice hotel in Granada, Nicaragua
- When consumer-based tourism goes wrong: Cancún, Mexico
- Colonial city in Argentina: Salta
- Colonial city in Uruguay: Colonia del Sacramento
- Colonial city in Bolivia: Sucre
- Colonial city in Colombia: Cartagena
- Colonial city in Ecuador: Cuenca
- Colonial city in Peru: Arequipa
- Colonial city in Guatemala: Antigua
- Colonial cities in Nicaragua: Granada and Léon
- Colonial cities in Mexico: Merida, Oaxaca, Puebla and San Cristobál de las Casas
​​​- New Zealand's most famous coastal national park: Abel Tasman NP
​​- The prettiest historical town in Romania: Sighisoara!
​​- History preserved: Time capsule of Romanian culture Maramures
* As I don't think that (besides a 5* hotel) Angra dos Reis is an interesting  place to visit as a traveler, I only included a Fact Sheet concerning Paraty and Trindade.