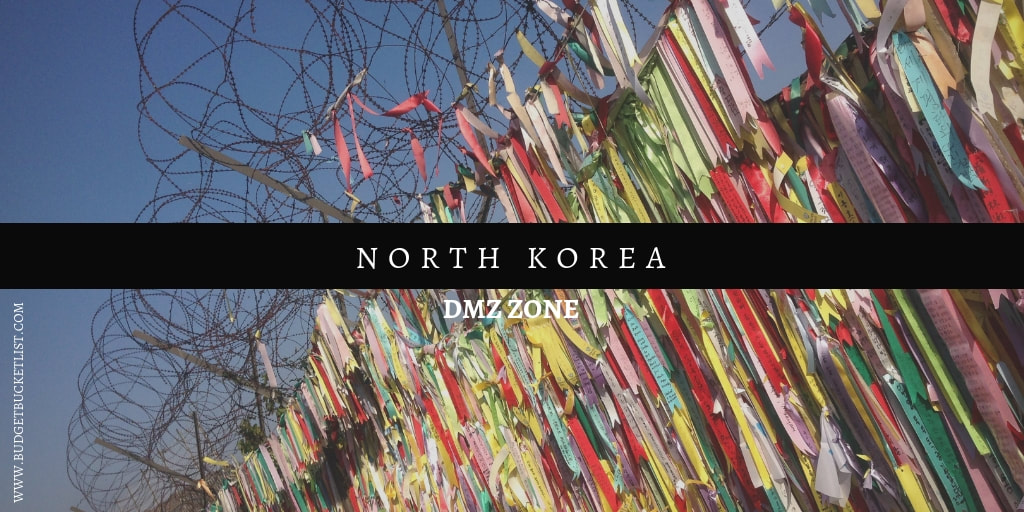 Thunder rumbled through the night. Grey skies crowned earthly events. It suited the day.
​
The day I was going to visit North Korea.

The North Korea of Kim Jong-il and Kim Jong-un. The land where women were forced to drown their babies and where poorly performing Olympic athletes were sent to labor camps. The home of terror, torture, severe indoctrination and crimes against humanity. The Korea that differs so vigorously from the Korea I’ve seen the last 2,5 months, marked by wealth, technological supremacy and neon lights. 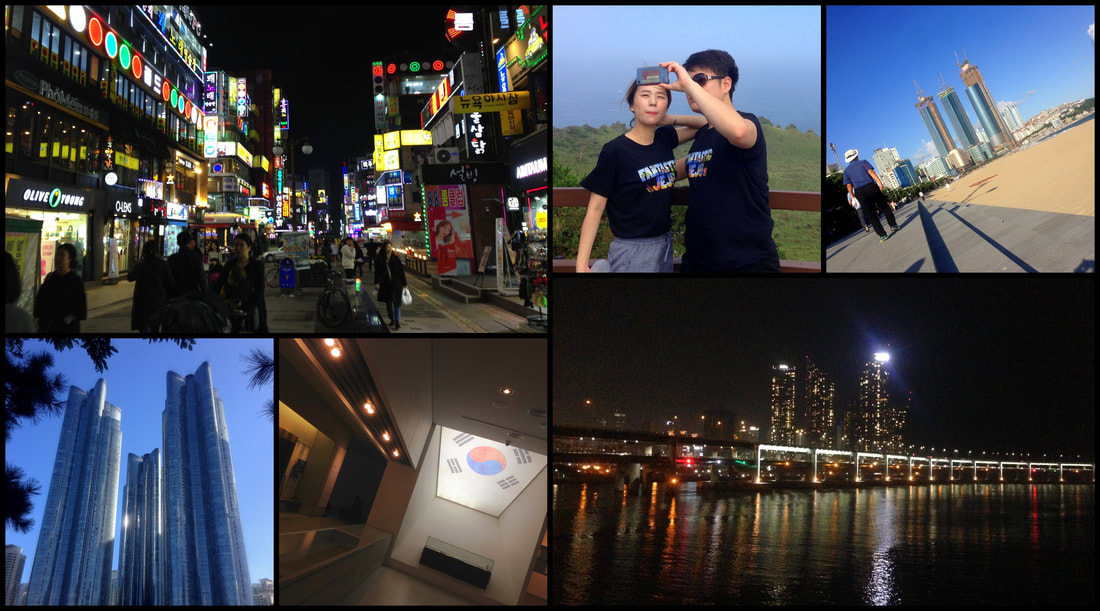 Too busy to read now? No problem, save it for later!
​Save on Get Pocket | Save in Browser Bookmarks| Save on Instapaper
I was going to experience one of the world’s most feared countries, the internationally shared bogeyman. But only just. The antsy tensions between the two Koreas force you to limit your exploration to the military border zone, the DMZ and JSA*, the most interesting sights when it comes to actually witnessing national developments from the Korean War to current frictions in one visual.

​
* Demilitarized Zone / Joint Security Area or: Panmunjeom – only accessible by tour.
I couldn’t  sleep. My brain buddied up with Google to absorb the night with knowledge. A mental scheme internally stored:
In short, this isn’t the country to rebel. Getting ‘in trouble’ does not mean a gentle slap on the wrist. Trouble means forced labor camps for up to 20 years, lengthy prison sentences, torture and death. 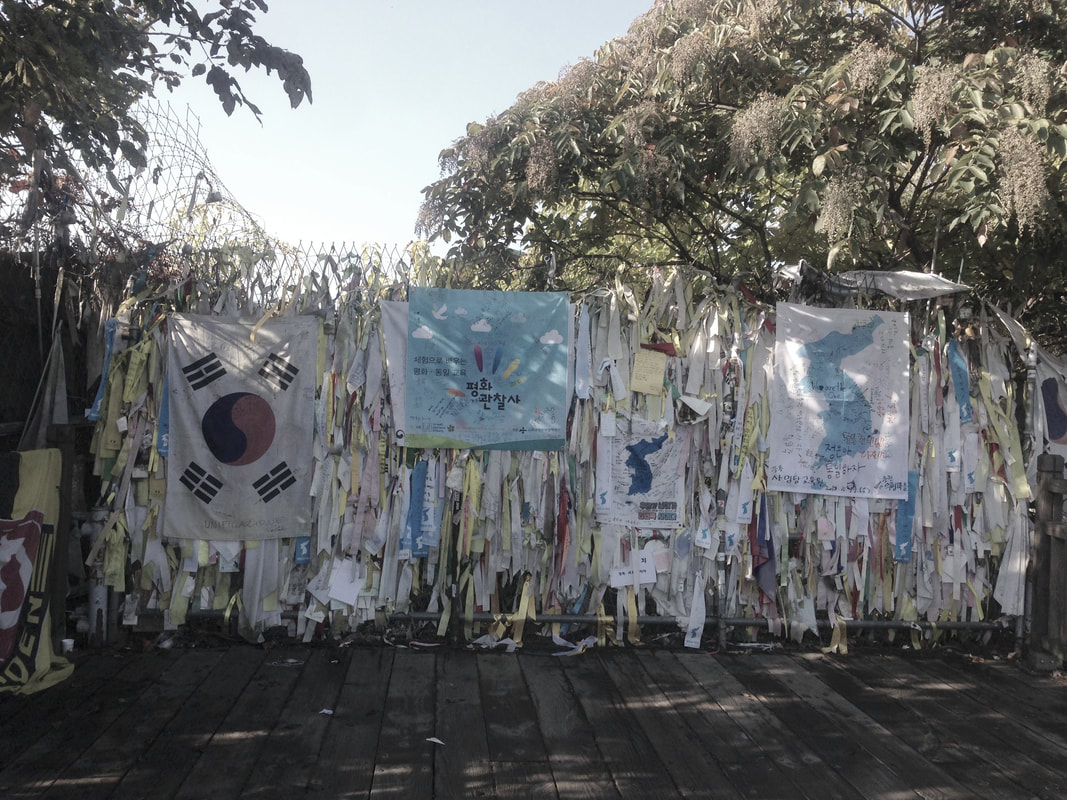 Soon I learned this extremity mainly applies to visitors engaging in a full round-trip through North Korea (currently only possible from China), participants of the DMZ and JSA tours mustn’t worry too much and are solely reminded to bring their passports (yet a dress code applies, basically asking you to hide all skin and curves). Safe and well-organized tours leave Seoul daily to show visitors a slice of past and present, VVIP Travel being the market leader offering the best-priced deals in town (this I researched). Initially I opted for the JSA-package, the most hardcore experience of both leading you towards the heart of the border zone where North and South Korean troops are standing face-to-face, allowing you to feel the ice cold tension trembling in the air... A tension so severe that tours were cancelled for another two months. Which left me with another suitable option: the DMZ Tour, an extensive excursion through the varied edges of this stretch of the political buffer zone. 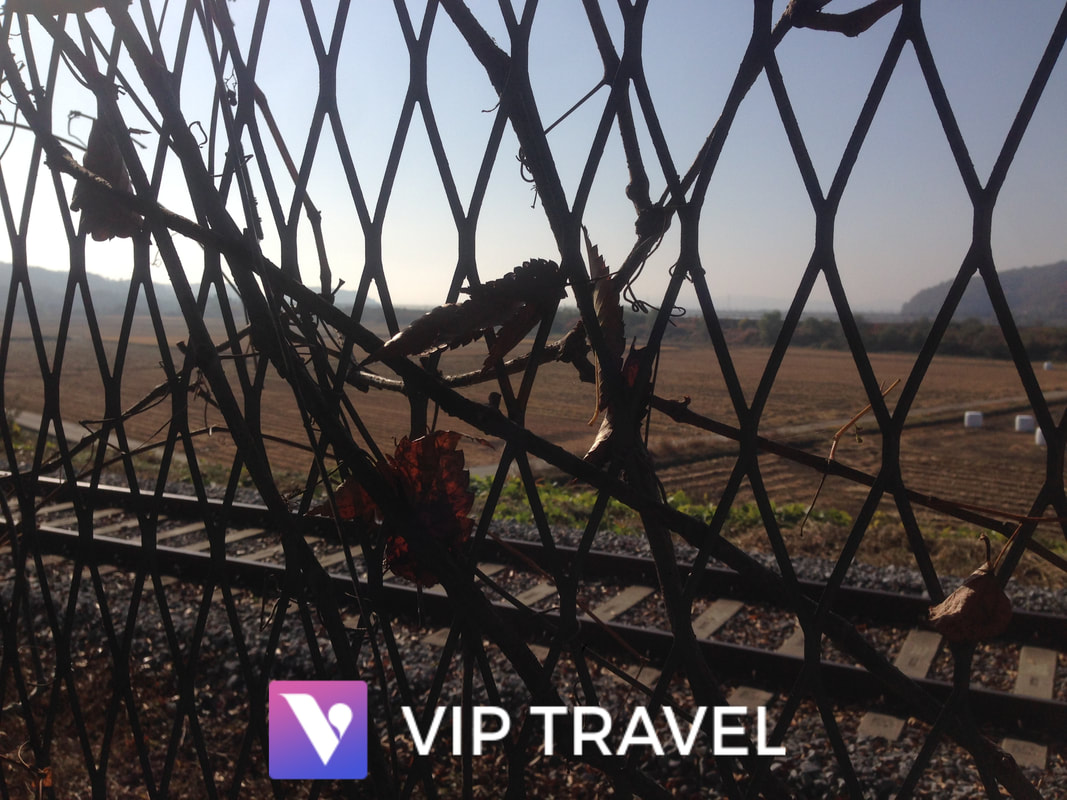 It’s funny they call it that, Demilitarized Zone, as nowhere else in Korea I saw this many soldiers.

Nationwide there are about 600,000 of them in the south, guaranteed my knowledgeable guide, forced into duty at the age of 18. I always imagined myself fleeing the country if I were in the shoes of these poor fellows... if it weren’t for the passport that is only granted after completing military service. Sneaky! I listened to her words, persistently pressing us to not leave the group as landmines, ‘accidently’ dropped among the civilians inhabiting the (tax-free) DMZ Zone, were currently being cleared.

First stop: Imjingak Park and the Bridge of Freedom. Designed as a place where South Koreans can honor their families lost to the North, already over half a century out of their reach. Built in 1972 with the hope Korea would once again be one, nowadays it’s a strong reminder of the persistent separation. A strong schedule allows you to swiftly run passed many interesting scenes, such as the Unification Pond in the shape of the Korean Peninsula, the Peace Bell, outdoor photo exhibitions, monuments, tanks, the North Korea Center and the dismantled Gyeongui Train Line...
​... But reality instantly stopped me at the border line, hidden under a sea of weaving ribbons. Message of hopes, wishes and dreams cracking my heart wide open. 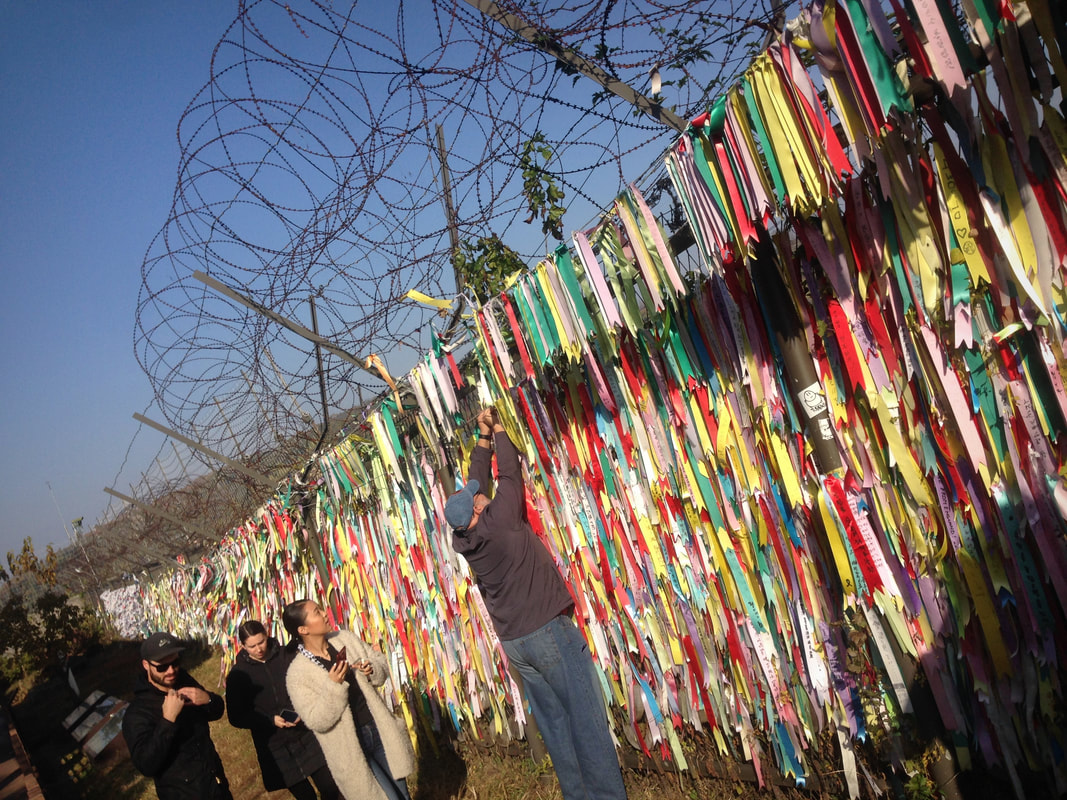 Time’s up! Back in the bus! Driving over the roads quite recently used as locations for massive speakers - used for blasting out South Korean propaganda into the hearing scope of the North, where it met the even more powerful chants of the enemy - we swiftly met another particularity: The Third Infiltration Tunnel, one of four leading towards Seoul, enabling a planned surprise attack.

According to the North built by the South, according to the South built by the North. As I was currently accompanied by the latter I was led to believe the second, backed by convincing proof of dynamite directions which your guide will gladly show in case of the slightest doubt. 2 meters wide and  about 1,7 meters high (you’ll be wearing a helmet), this isn’t a place for the claustrophobic among us, and if I have to believe the many warnings: neither for the unfit (it’s about 10 minutes back ‘uphill’ – nothing to worry about though). Being forced to leave all your electronics and camera equipment behind you can crouch towards the end of one Korea, the beginning of another. If you have the persistent need of “touching North Korea”, this is your spot.

And it was about to get a tad weirder with the slick promotion movie presented in the DMZ Theatre and Exhibition Hall, introducing the border zone as a place of lush nature and laughter (a sublime insight in the tactics of propaganda!).
After some bizarre selfies with carton soldiers (the real ones are still forbidden to photograph) and children-friendly military puppets, the tour continues towards maybe the most prominent stop of the tour: The Dora Observatory.

What makes this stop so special, you ask? Well, ladies and gentleman, this is the spot where you can look straight into the Forbidden Land. North Korea stretches out right in front of you. Gloriously, one might argue...

... who would have thought a country that feared and condemned could look so goddamn beautiful?
Rolling hills, lavish fields and green galore. Grab one of them binoculars and you might even spot a North Korean bending in the meadows, absorbed by fruitful labour. Where along the highway-fences trees are cut to hide enemy disguise, here everything seems to grow twice as hard to make up for natural needs erased by men fighting men... Making up for its hidden cruelty, as the strongest disguise of all...

Somehow of all unsettling sights I witnessed today, this shocked me most profoundly: The beauty of something presumably ugly.

It’s interesting to keep an eye out for the from here visible propaganda village, historically used to attract Koreans into the apparent prosperous North. If you’re blessed with clear weather you can see as far as the city of Gaesung (3d largest of North Korea)... a tall, bronze statue of Kim Il-sung peaking out as a remarkable indicator.

​
The last stop of the tour forms the first stop for future northward travel to a destination that won’t be called North Korea anymore, just Korea. The symbolical start of a prospective literal unification: The Dorasan Train Station, ready to roll.
​
Passport fetishists can have their stamps here, although due to current political tensions it’s recommended to merely stamp a separate paper.
Besides a stamp, I went home with a piece of the actual border. Crazy! For my future-grandchildren, so to say. [I especially liked the comment of the lady selling it to me: "grandchildren?! you look so young!"... it's okay, I'll take that.]

With a full head and an empty heart I returned to the tourbus, ready to be dropped off in the Itaewon area where another military sight can be admired, may you have a drop of energy left: The War Monument, an essential stop on any Seoul itinerary.
Hey what’s that? US Army on both North and South Korean war machines. [sarcasm] How unexpected! [/sarcasm]

What an important, crucial day I’m so happy to have experienced.

​
In order to support the travelers’ community, I spend many hours per week to adequately document all information and advices for prospective visitors, accompanied by a (hopefully) entertaining insight into my personal observations and experiences. This service is and will remain free. However, if you voluntarily want to make a contribution and support my travels and thus the creation of new stories and information supply, here is the button you’re looking for:
Donate
Related:
- Travel South Korea: Seoul, Busan, Jeju Island, Jirisan NP & Surroundings, Andong, Taebaek, Gyeongju, Gangneung, Seoraksan NP & Odaesan NP
​- 13 Strange Observations of South Korea

- Ready for another Asian highlight? Visit Malaysia!
- Crossing the border to Singapore... or better not?
- The Philippines: Yay or nay?
- Discover the richness of Brunei in Bandar Seri Begawan!
​- One of my favorite countries in Central America? The dangerous Honduras!
- A nightmare in El Salvador...
- Visiting former Yugoslavia: Travel through Serbia!
​​​- Guest Blog 'Kosovo Girl Travels': Travel tips and stories from Kosovo's first and only travelblogger!
​- Jordan, a destination on the rise: Extensive guides to Petra, Amman and Wadi Rum
​- 10 things you can't do in the non-touristy part of Morocco