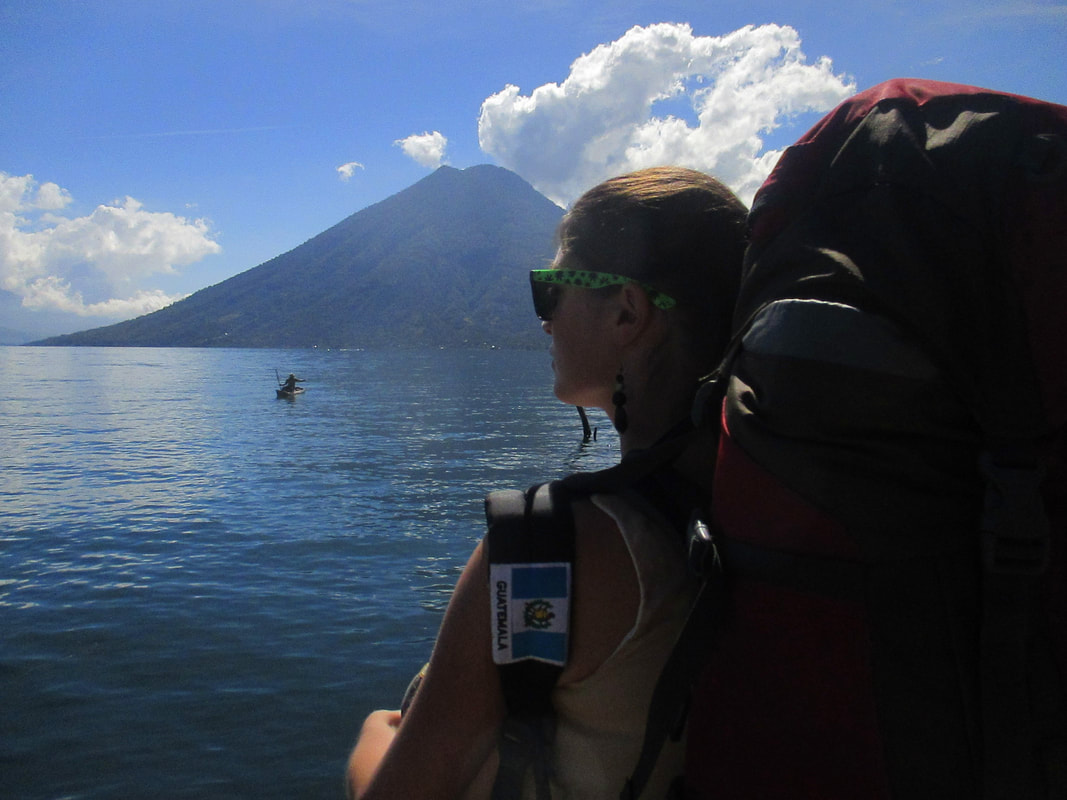 I thought Lago de Atitlan looked close on the map when travelling from Antigua. I never learn. The journey I was about to take can go straight into the top-3 of the most uncomfortable trips I ever experienced (beating the trips hitch-hiking in the back of pick-up trucks or hanging on the side of rickshaws). First I had to take a chickenbus to Chimaltenango, where overcrowded got a whole different meaning. There I took another even more crowded rattle-thing to Los Encuentros. I didn't know what was worse: the road with the most terrible pointy curves and turns of the country, the bus itself in which I sat on one butt cheek with seven people on a three-people-bench or the driving style of the maniac behind the wheel. Every time we turned left I almost involuntarily orally pleasured the guys crammed next to me by falling into their lap, every time we turned right I had to hold the luggage rack in a water-ski-position in order not to roll to the front of the bus over the heads of the hundred other passengers. I wasn't done yet: I had to take another chickenbus to a village and then ANOTHER one to Panajachel and from there take a lancha-boat to San Pedro.

​I could imagine a better way to spend the first day of Christmas. Especially because most Guatemalans used us to secure their own Christmas bonus: Welcome to the rip-off-circus, Feliz Navidad to me!

** Later on I learned in this rare case a shuttle would have been cheaper (50q instead of 80), more convenient (direct instead of four crammed buses and a boat) and quicker (three hours instead of six). I couldn't as they didn't go on Christmas, but I learned a valuable lesson for the return trip. 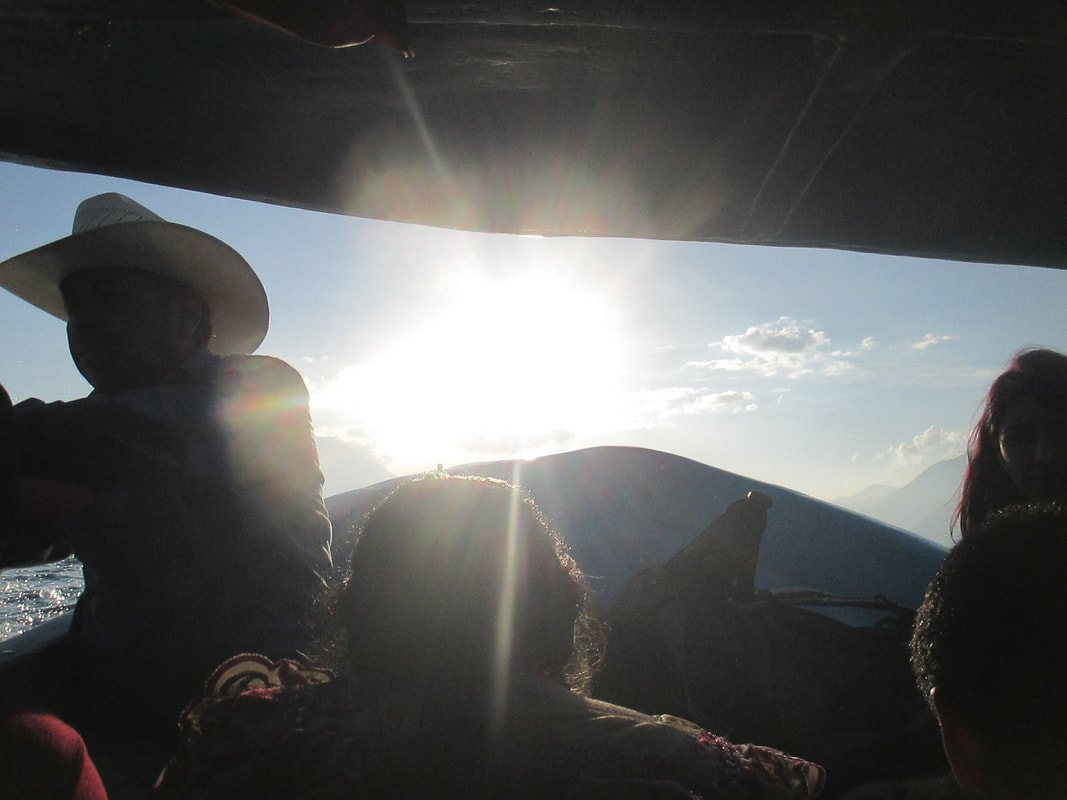 After this shitshow I finally arrived at the house where I was invited by a bunch of Aussies I met in San Ignacio [Belize], ready to be rewarded for all the trouble. That didn't happen. It only got worse. My view of Christmas: snow, deliciously smelling pine trees, lights and fires, Wham, family time, mountains of food... Their view of Christmas: Take-out junkfood, booze, cocaine and MDMA. I was just sitting there in the middle of it: sober, starving, in between maniacal chewing and raving people, thinking about how nice it would be to see my family again after almost 1,5 year. It was very kind and sympathetic to be invited, without doubt, I guess I just had different expectations. 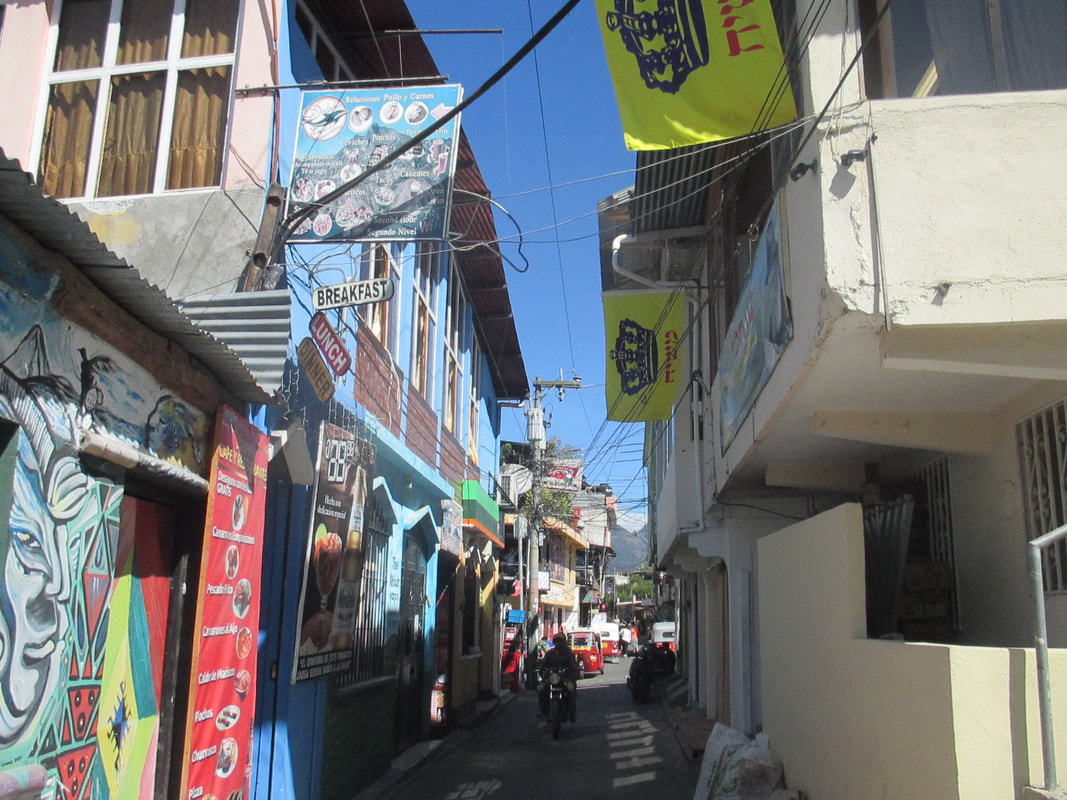 ​Apparently I had to sleep a night for these expectations to be met. I crashed in between the empty bottles under a blanket on the couch, my earplugs keeping the noise out. Once I opened my eyes and walked onto the roof terrace with a cup of coffee I got slapped in the face with the most dazzling view over the lake and its surrounding mountains. This was everything I needed, the entire prior day was forgotten. The sun shone bright, the people were detoxed again and revealed their true uninfluenced personalities, freed from the cloak of drugs. I was happy.
I decided to leave San Pedro though, as there's nothing authentic about this place. It's pumped out of the ground to please the easily satisfied backpacker party crowd.
​
San Marcos, the hippie-new-age-vegan-haven, seemed to be a better match. 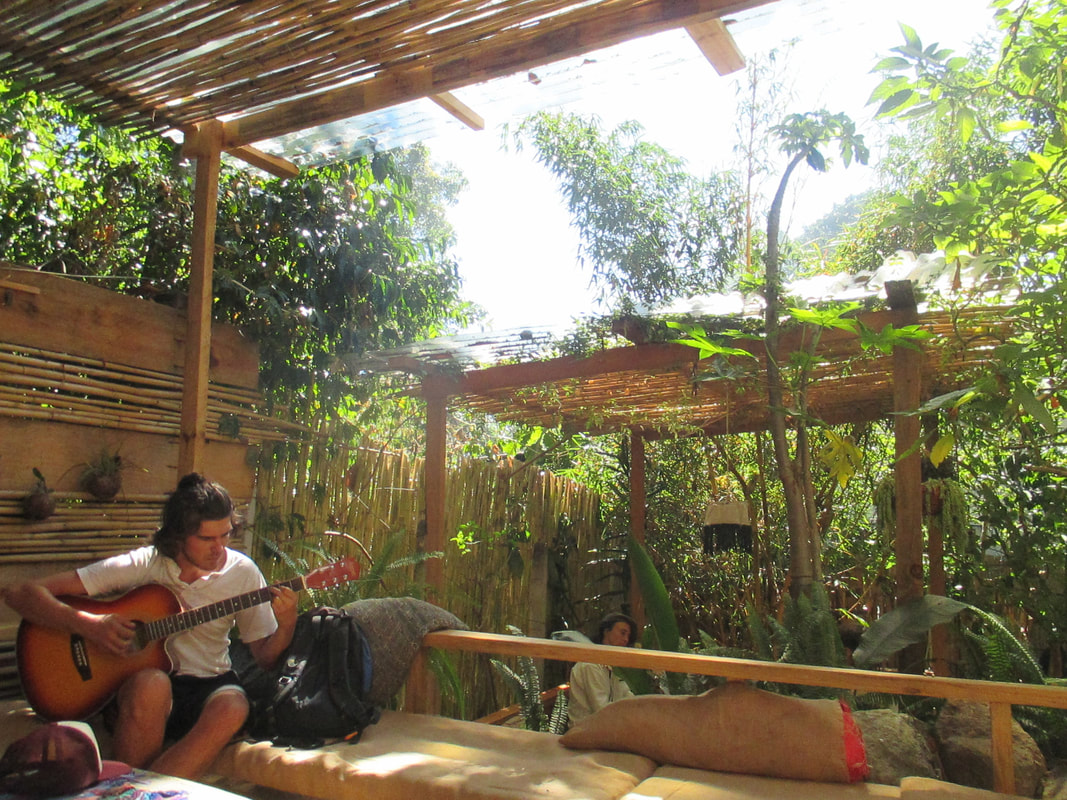 The moment I got off the boat and walked through the little slithering alleys full of organic biological produce, recycled artesania and herbal shaman medication I knew I found my place. I felt it was kind of artificially maintained, the girls frantically copying each other to look as hippie and enlightened as possible... But well, let them.
​
I looked at the hand-written ayahuasca-colored advertisements: Open channel healing art retreat... Meditative reiki massage fusion... Cacao, hike, fire & shamanic journey... Cosmic convergence festival... The divine feminist... Ayurvedic consultation... The art of making herbal medicine... Spiritual sexual shamism... Manifest your dreams: yoga of sound & chocolate. Alright! Enough for me yet to learn, can't wait to be a part of this weirdness.
First I had to find Merlin. The wizard? Yes the wizard.

In Belize I met some American boys from a commune who temporarily settled in this place at the house of the local wizard, they said I should come. Hearing about a planned rainbow gathering I was easily convinced.

We really met him. It was Merlin the wizard who I coincidentally saw a few days before on the Disney classic ‘Sword In The Stone’. He travelled down from France straight to San Marcos with the intention to live here, without having seen the place beforehand. That's 17 years ago at the moment of writing (2015). Now this skinny man with the long white beard and three happy teeth decorating his joyful smile completely settled down on top of the hill with his nine cats, opening his house for any stranger that randomly knocks on the door (in fact, his house doesn’t even have a lock). 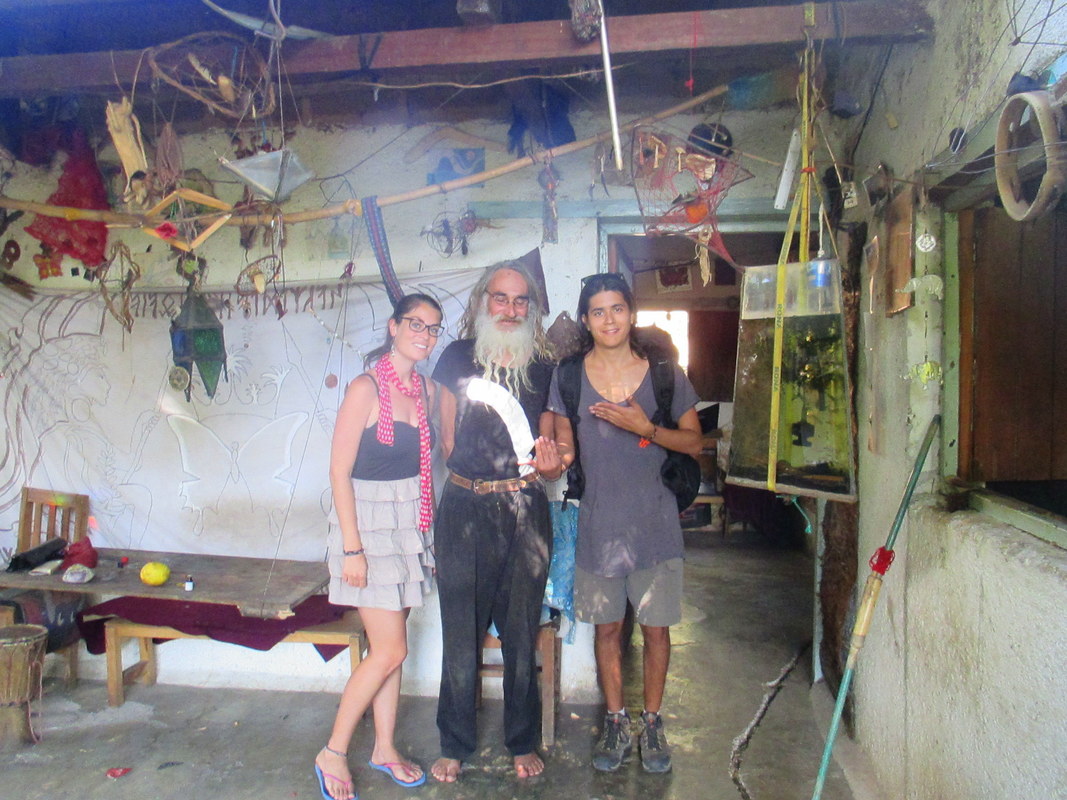 ​That night we spent in his little kingdom, San Marcos style... What's that? Oh well, with ten stoned people that were randomly camping in the garden, brewing soup in a pot on an open fire and building djembe's. When I asked about the shower no one knew if it worked or not, why would you shower in the first place? You just swim every now and then. My remark that I shower after swimming to rinse off the dirty water vaporized in the marihuana breeze, the brains too high to process that nonsense. But it didn't matter indeed, I crashed in the kitchen on a bed that smelled like cat pee and where visibly hundreds of people slept on before... No need to be clean for that, life is so easy.
How much I was repelled by San Pedro, that’s how much I adored San Marcos. I had to leave, but immediately asked around for work and voilá, within an hour I had something to come back to: a volunteer gig in a hostel in exchange for private accommodation and food.
​
Little did I know life had other plans for me: My then-boyfriend picked up chikungunya (a virus spread by mosquitoes causing breakbone fever, some sort of dengue) wiping him out for weeks… I got a severe food poisoning that ended in a hospital in El Salvador due to serious dehydration complications, a high fever and abrupt considerate weight loss. Stuff happens. Maybe it’s life’s way of saying I should have never left. 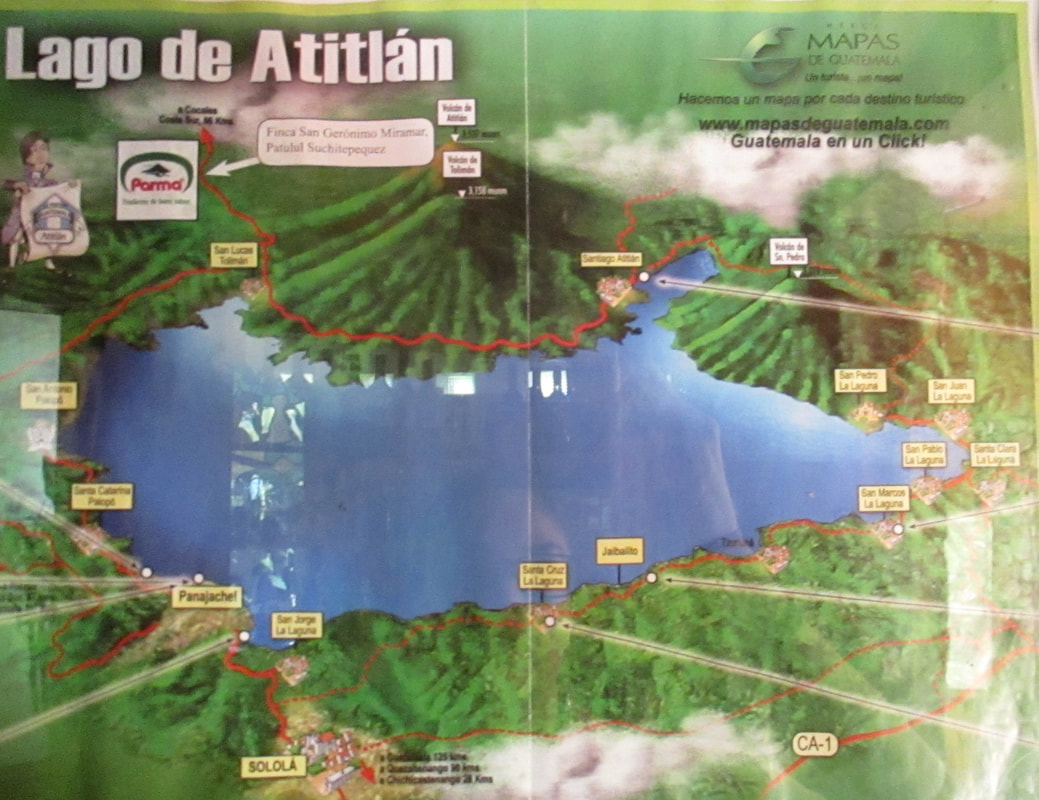 In order to support the travelers’ community, I spend many hours per week to adequately document all information and advices for prospective visitors, accompanied by a (hopefully) entertaining insight into my personal observations and experiences. This service is and will remain free. However, if you voluntarily want to make a contribution and support my travels and thus the creation of new stories and information supply, here is the button you’re looking for:
Donate
Related:
- Hiking adventures in Xela, Guatemala
- Couchsurfing on a boat in Rio Dulce, Guatemala
- The most beautiful natural treasure of Guatemala: Semuc Champey
- The biggest Maya city: Tikal, Guatemala
- A journey through the mind with ayahuasca [Peru]
​- Wannabe a hippie? Head to Tulum, Mexico
​- Vegan food and tarot-readings in Minca, Colombia
​- Uruguay's hippie beach spots: Cabo Polonio & Barra de Valizas
- Hotspot of the Argentinean (wannabe) bohemians: Purmamarca & Tilcara
​- An independent hippie-republic in the center of Copenhagen [Denmark]: Christiania
​- An independent hippie-state in the center of Vilnius [Lithuania]: Uzupis
- Other party-hardy backpacker disillusions to avoid: San Juan del Sur [Nicaragua], Taganga [Colombia], Cancún [Mexico], Playa del Carmen [Mexico]
​- The city of volcanoes: Auckland, New Zealand
​- The city that smells like eggs: Volcanic Rotorua, New Zealand
​- Natural hot pools and a volcanic alpine crossing: Taupo/Tongariro, New Zealand​
​​- Travel South Korea: the ultimate budget guide to Jeju Island!
​- Malaysia's street art hotspots: Penang & Ipoh!
​- Check out Budget Bucket List's FAVORITE HIKING DESTINATIONS worldwide!