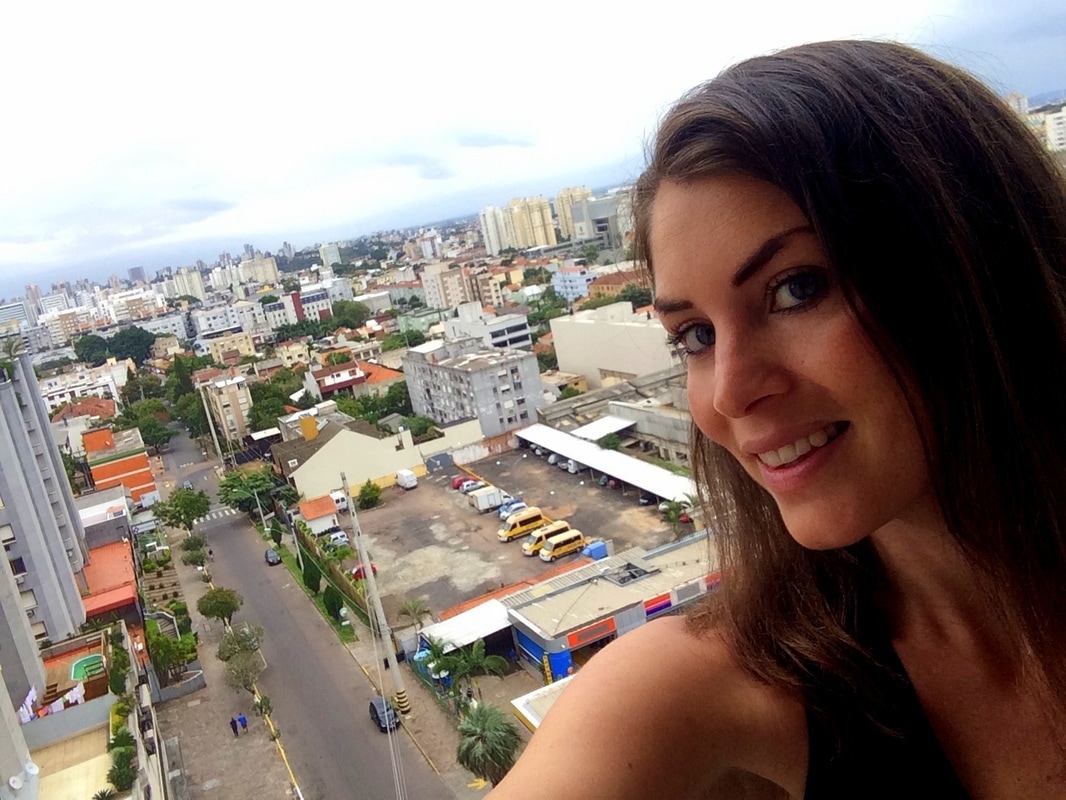 The more people warn me for a certain country, the more I want to go. The Steph-travel-law-of-attraction, it’s easy as that. So when I got robbed of my passport, all my credit- and debit cards, my iPods, my camera, my driver’s license, travel documentation and all my cash, I just waited for life to straighten itself out again and went to that other country I shouldn’t go to according to everyone caring for my well-being: Brazil. Hitchhiking of course, ha, I do what I want. Right…

I got robbed the first 24 hours I entered the country. 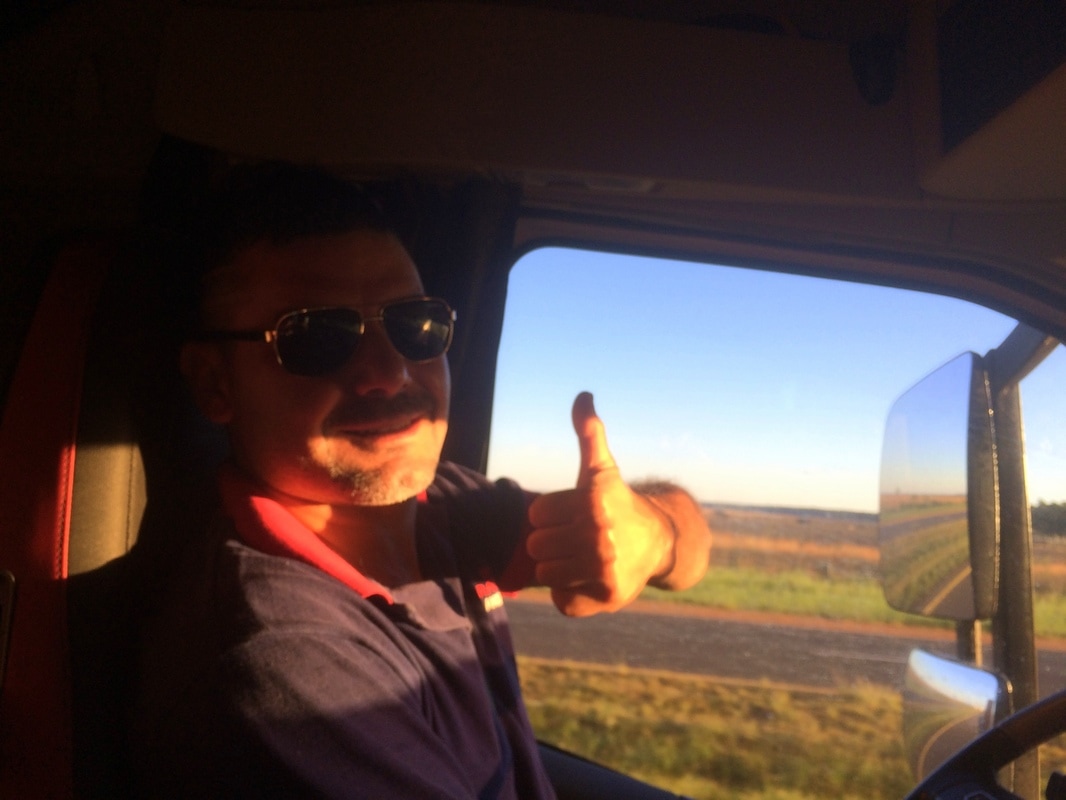 … I immediately tracked down some other splendid expressions of mankind: Rafael and Elton, two guys who follow trucks with guns for a living. Yeah, that’s apparently necessary in Brazil in order not to get robbed from your load and entire vehicle, splendid omen. They were more than happy to drive me all the way down to Porto Alegre, for the simple reason they never met any woman like me before and they wanted to hear me talk about what I call life.     ​ 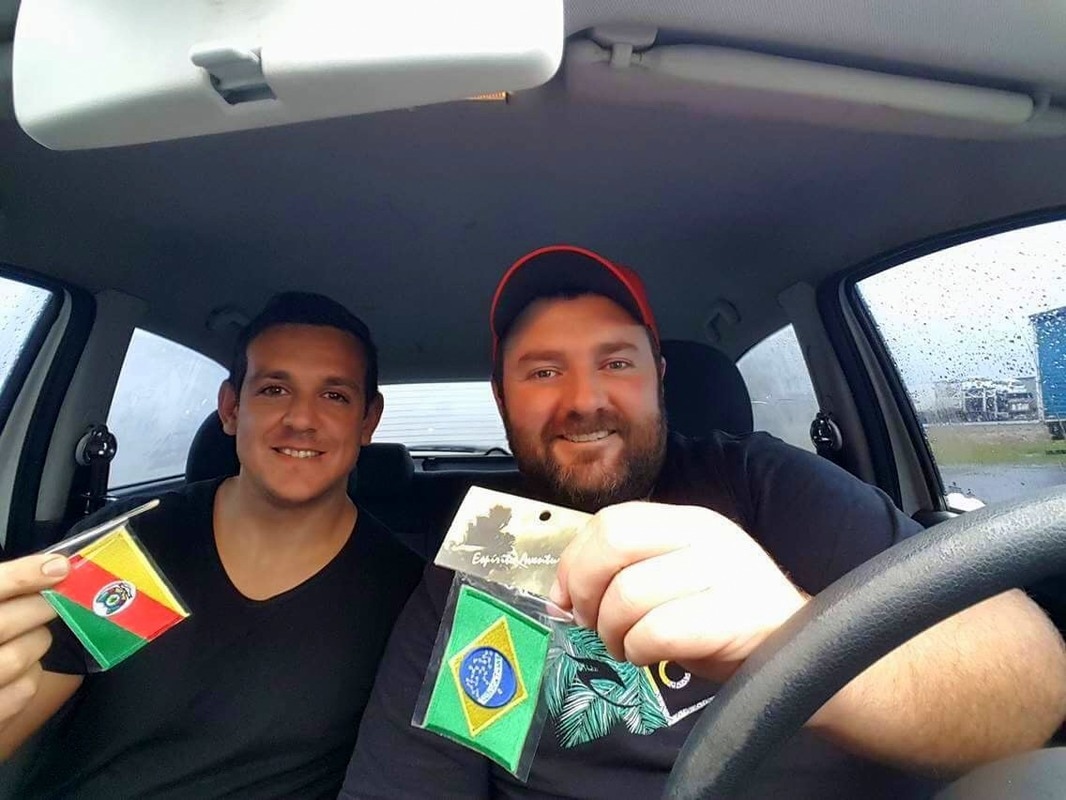 However, they had to wait a lot before they could leave border town Uruguaiana, and as such, so did I… up until the point we decided to spend the night at a gas station. Nothing I haven’t done before.     ​
So after a little barbecue in between five parked trucks I pitched my tent on the cozy cement surface of the parking lot, on which I slept without a mattress… Hm, maybe a shower would do me good? It for sure would, if no one would enter the room with an extra key to snatch away your money belt that is.
​
The moment I realized my money, credit card and passport were gone again I lost it. Not again, this is not happening. I woke up every trucker in a 7km radius but I didn’t care, I knew who the thief was and that bastard was going to give me back my damn passport. And he did. Don’t wake up a peaceful Leo. 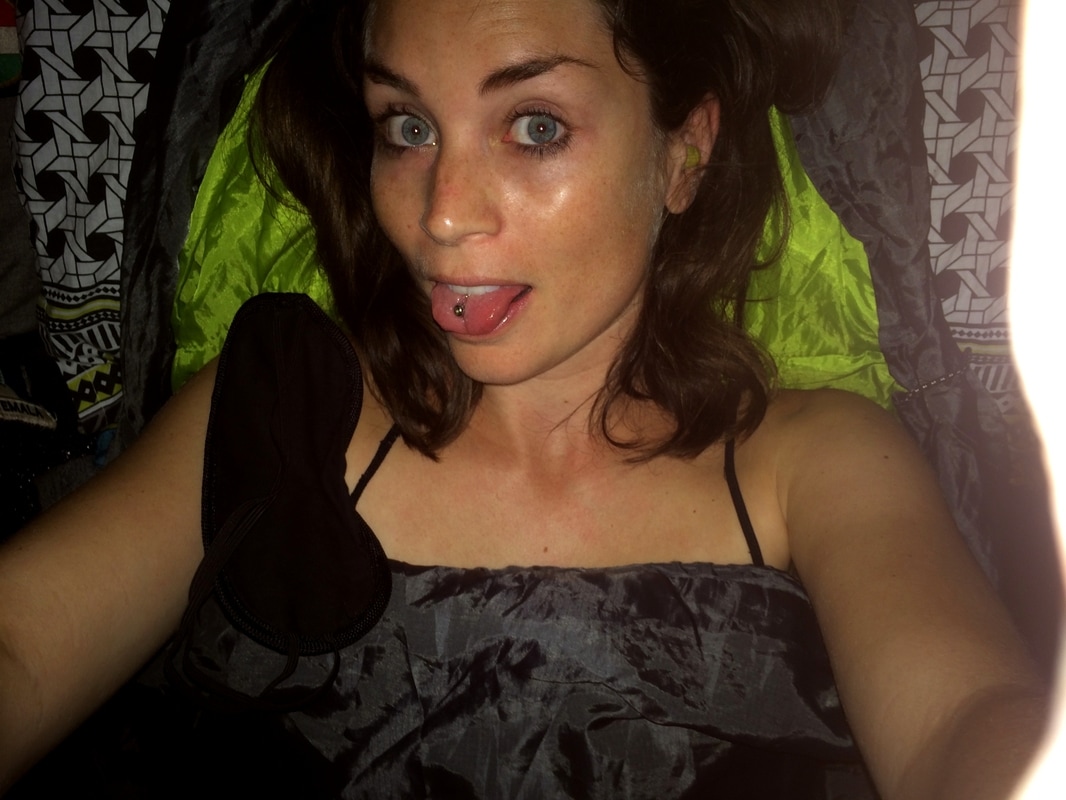 My money belt miraculously appeared again, without my just cashed out money and freshly bought USB-sticks, but with my brand new passport. I was satisfied. Keep the money, I told him, if your life is so miserable and you need it that much I would have given it to you if you just asked me to. Now you have to live with the humiliation of lowering yourself like that, you got your punishment alright.

Welcome to Brazil, I guess.
​
While wondering why I so eagerly needed to explore this country again we drove coast-ward, the place where my friend Carlos awaited my arrival. He hosted me before in Foz do Iguaçu (check that blog here), but couldn’t wait to show me his new home base Porto Alegre. He knew what just happened and had just one mission: make me drink until I forgot about that. Powerful strategy. 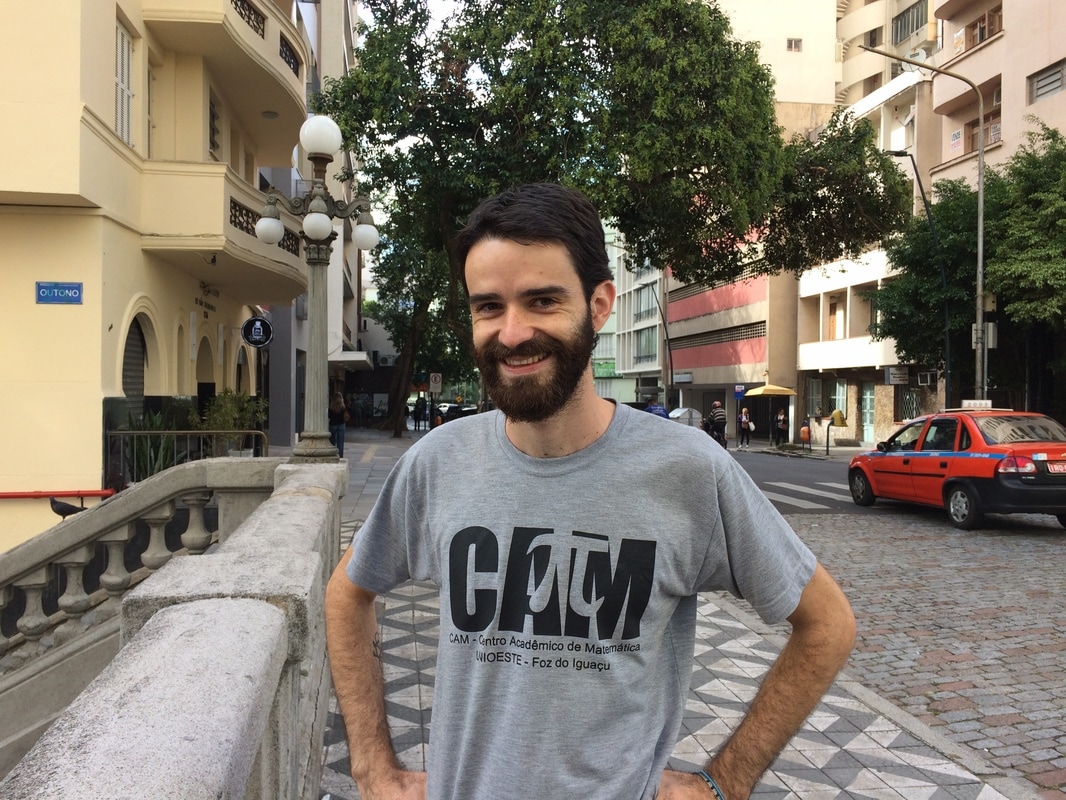 With those national alcohol-bombs called caipirinhas that goes quite efficiently, I must confirm in retrospect. At some point that night I even forgot where I was again, geographically… which in the case of Porto Alegre might be favorable, some might argue.
​
Truth told, this city didn’t promptly blow me away with its stunning architecture, vibrant cultural scene or appealing supply of museums. It could have maybe, but because of my superb timing during Easter I wouldn’t have known anyway. You think Easter is fun? Not here, with Easter Porto Alegre is dead without any future perspective of resurrection whatsoever. 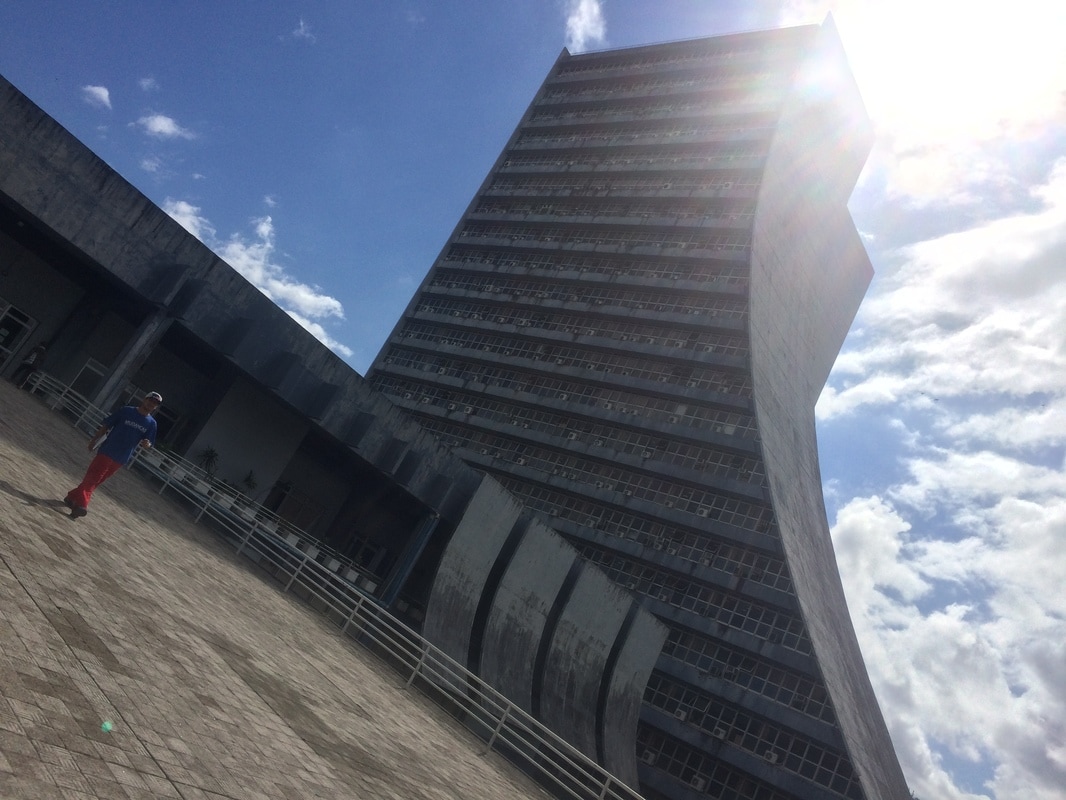 I would have loved to uncover the hidden urban treasures of this shady metropolis, but I only found closed doors during my entire stay here. But that didn’t temper my enthusiasm, the fact that this was the first dot on my personal Brazil-trail for sure worked in its favor. While I helped Carlos move in into his new apartment I let a wide variety of impressions seep in. ​
Buildings reaching to the horizon, homeless sleeping at their feet while men in suits raced by in Mercedes’s without looking down upon them. Parks unexpectedly sprouting out of the concrete like sparse oases. Street art outlining social tension and political critique, reality unfolding itself right in front of it like subtitles of this image presented. Absolutely ape-nuts people. A guy with a Jesus-thorn-crown on his head and red painted nails singing along with Boney M. A skinny black boy crossing the sidewalk moonwalking (done so well that even M. Jackson would turn pale out of jealousy, oh wait, awkward use of words). A man jogging butt-naked in the park… wait, what?    ​ 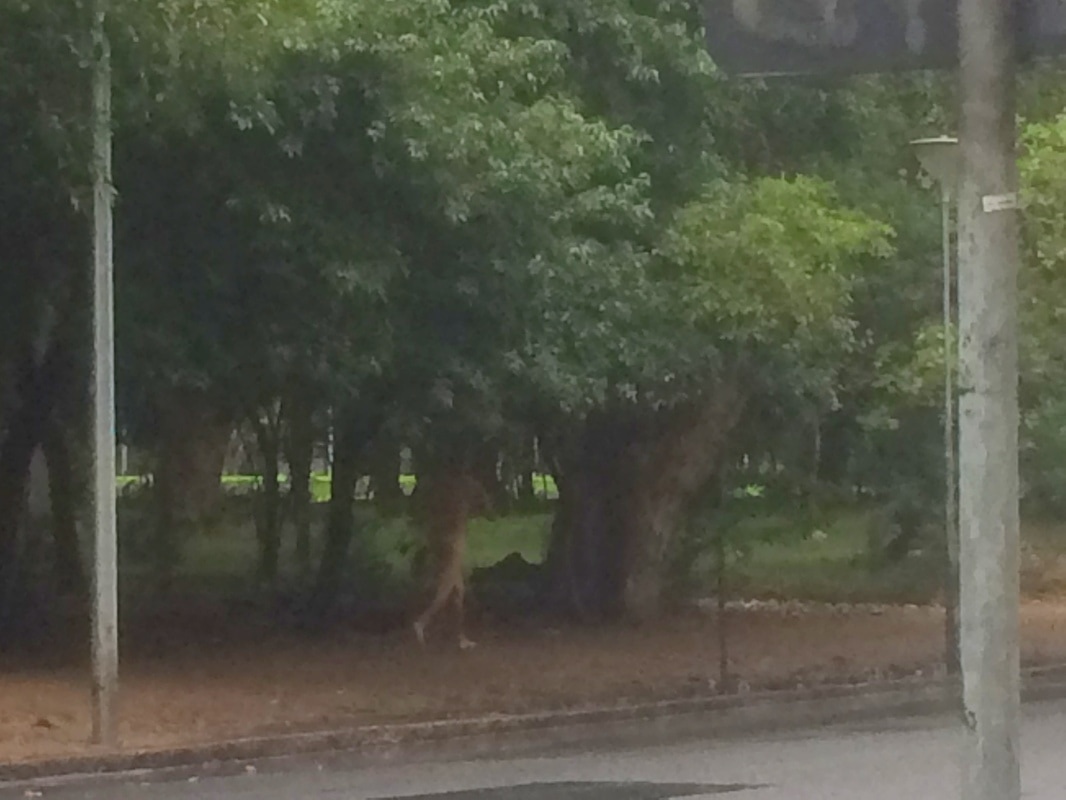 Is this how people jog in Brazil? Is this local culture? Is this what I need to do to blend in? Am I being rude by working out here with my clothes on? So many questions... (sorry girls, this is the only photo-proof  I have)
​
And good-looking people all over the place. What the hell. In every hole and crack you look there's some hot guy hiding. I even found myself attracted to some homeless people, djeez Steph, get a grip. I know every country has a percentage of beautiful people, which is usually an elite, that’s why they stand out so much of the mundane-looking masses. But in Brazil every sense of equilibrium is gone. My neck got a lot of stretching those first few days, I can tell you that… if this is life’s way of treating me after an emotional break-up, it’s doing an outstanding job.
While trying to not be distracted by all the man-candy surrounding me from all angles, I turned exploration-mode on, focused on everything that hadn’t doors that were closed for Easter. The tourist in me comes out in the most unlikely places. While snapping holiday shots of Viaduto Otavio Rocha, the Cathedral, Escadario de 24 de Maio and Palacio Piratini, Carlos stood on the look-out. He must, in case I wanted to keep that iPhone. If there’s one sentiment overcasting my senses, it’s the feeling of danger here. You can almost touch it. You know it when strolling around on the plazas or peeking in some alleys: do it fast, stay low key and stuff away your valuables. I don’t mind, it spices the experience up with some adrenaline to tell you the truth, but it’s certainly not for everyone.
​
I wanted more. 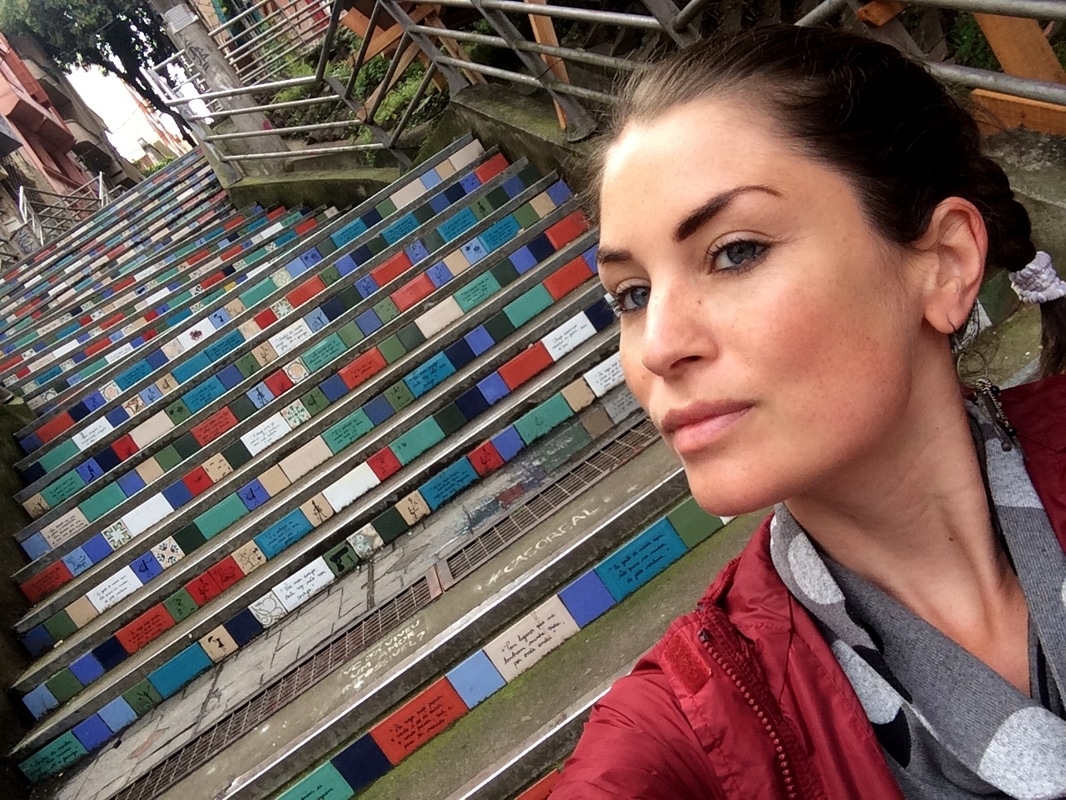 - “Are there any specific areas where I shouldn’t go alone?”, I asked Carlos.
- “All of them”, he answered without blinking.
- “Cool, see you later… I hope”, I murmured (which kinda rhymes on murdered).
​
But I didn’t get robbed. I just strolled and registered. I walked until I became absorbed by the city haze, forming a human piece in the diversified urban puzzle. I hung out with the feminist anarchist network, that had, ironically enough, a leader. [I always wonder what their meetings look like… they just kind of get together in the same space and start doing what the hell they want, individually in a group context? I don’t think much would be accomplished. Well, I don’t have enough female body hair to join such groups anyway. And the amount of uterus-tattoos scared me away before even considering it]. 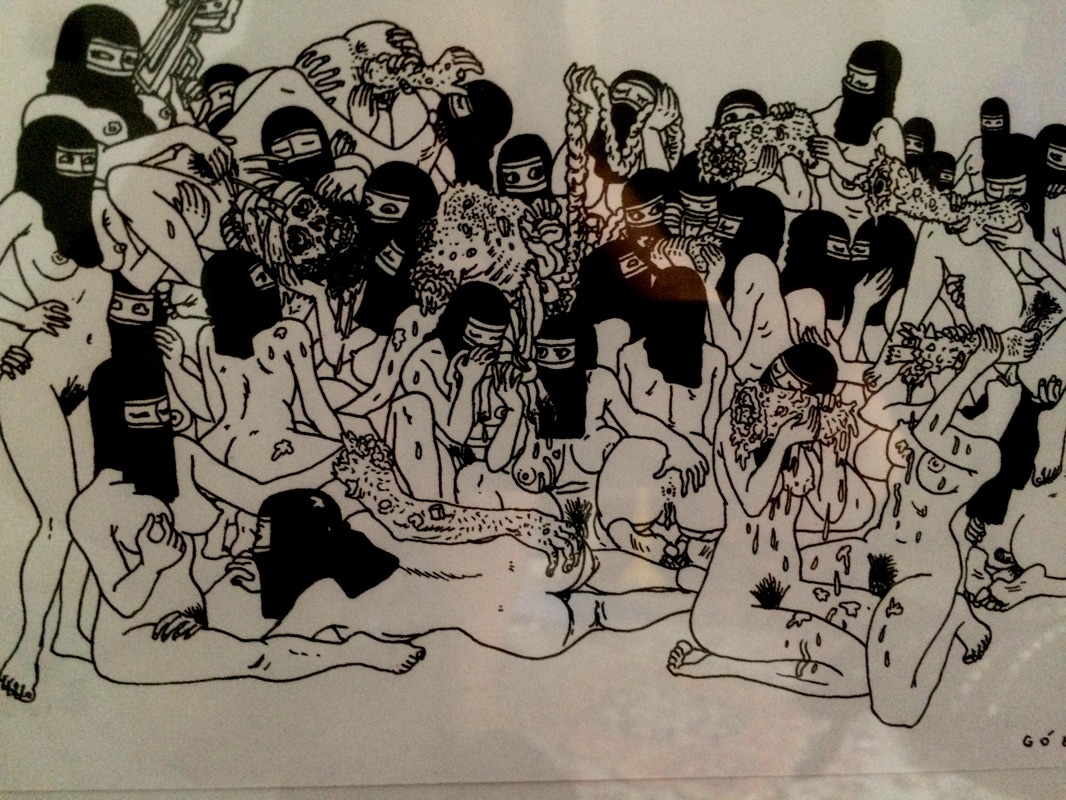 A painting I traced down in the room of the feminist anarchist.
​
And I biked, man, did I bike a lot.

You see, I had the great pleasure to meet up with this girl Karini, and Karini is an active member of Porto Alegre’s inline skate group. As I generally don’t have a pair of skates tied to my backpack and the female shoe-size 41 is non-existent in this continent anyway, I borrowed a mountain bike to join the skaters. And they don’t fuck around, I can tell you that. I, a Dutchie with far-developed biking legs, was struggling to keep up with their speed. And fast we could go, as we waited until midnight when all traffic had vanished and the bus lanes had transformed into our private racing circuit. That, people, is a lot of fun.
It was my highlight of Porto Alegre. I was just convinced that Brazil had more to offer than this.

​
In order to support the travelers’ community, I spend many hours per week to adequately document all information and advices for prospective visitors, accompanied by a (hopefully) entertaining insight into my personal observations and experiences. This service is and will remain free. However, if you voluntarily want to make a contribution and support my travels and thus the creation of new stories and information supply, here is the button you’re looking for:
Donate
Related:
- Getting robbed in Argentina
- Escaping an armed gang-rape in Valparaíso, Chile
- A horrendous night in Copiapó, Chile
- The most dangerous border crossing of South America
​​- Severe racism at the border of Singapore
- Couchsurfing with several men searched on Interpol
- Volunteering in a school aimed at HIV-infected children from the slums, Honduras
​- Corruption and misery at the border, Honduras
- Couchsurfing with a 'gangster' in Belize
- Couchsurfing with someone threatened by gangs in El Salvador
- The worse place to go to in Mexico: Cancún
​​- A little sneak-peek into North Korea!
- When traveling goes terribly wrong: Gibraltar
- Where you shouldn't go to for holidays: Kaunas, Lithuania
- Digital Danger
​​- Graffiti hotspots in South America: Bogota [Colombia], Sao Paulo [Brazil], Valparaiso [Chile], Asunción [Paraguay]
- Graffiti Trail in Glasgow, Scotland