Download File
An edited version of this post can be found on STEEMIT: Upvote me to support my travels for free!
​
It took me about two full weeks to remember this name. That’s how far in advance I knew I was going to some tiny place (20-30 inhabitants – not kidding) on New Zealand’s West Coast called Punakaiki. If that’s the Māori name for Pancake I don’t know, but the Pancake Rocks are the main attraction drawing in the crowds.

Most people just check this tiny walkway loop off the bucket list in five minutes and continue their journey, but not me. No, I decided to dedicate three full nights and days to this destination bordering the Paparoa National Park. Is that slightly exaggerated? I was about to find out. 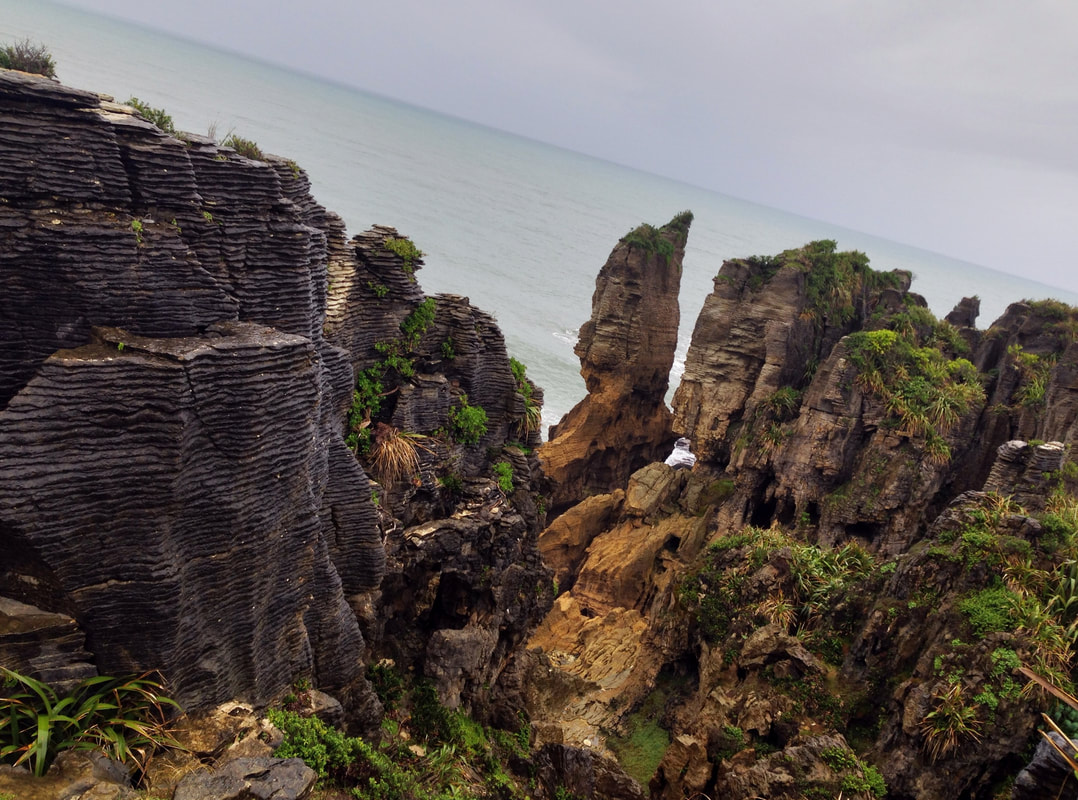 But first I had to get there all the way from Nelson. Preferably without spending a single cent. That’s honestly rather easy in this part of the world, as South Island has only two main roads, one along every coast, going right through every tiny village and town. Which means that you catch 100% of the West Coast traffic... but it also means only a tiny percentage of that transit goes actually further than an hour north or south. Which is in turn a great opportunity to meet people and listen to the stories of those who pick you up! Like those from an old man called Brian, who has been successfully married for almost half a century, but prefers to live about half a country away from the beloved wife; and who was the lucky receiver of an arthritis-related religious miracle. Or the raw Aussie immigrant called John who was drawn to these lands even further down under with severe symptoms of gold fever, digging for decades with his two brothers until they kicked out the eldest. Or that sweet cheerful lady, who, while steering through the stunning gorges of the Nelson hinterland, told me about an existence suffering the very rare disease called ‘cold allergy’ or ‘cold urticaria’. 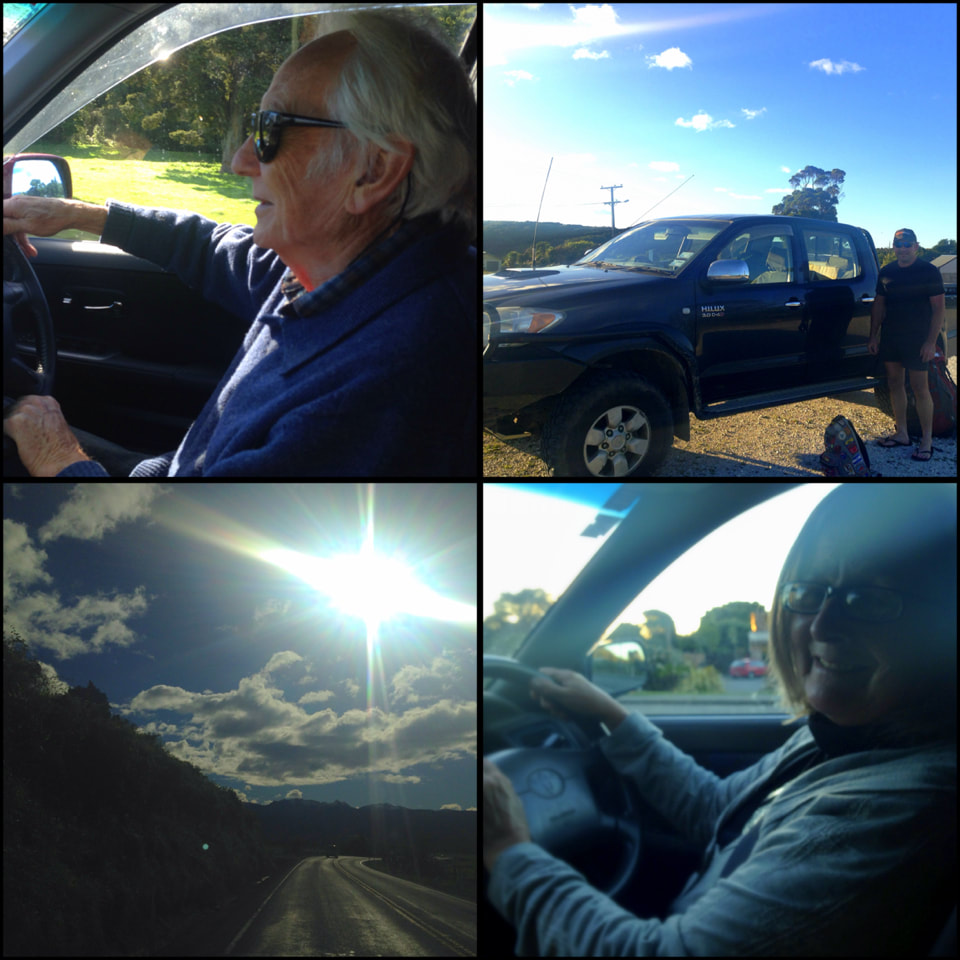 Well, she wouldn’t want to be in Punakaiki these days then, as the mercury was about to dangle around freezing point. So far my kiwi summer! In fact, after I witnessed a mesmerizing sunset from the cliffs I had to swiftly run inside to hide for the upcoming storm. The perfect weather to sit in front of a crackling fire place with a hearty meal. But oh no: there is no supermarket, food store or even 'dairy' available in this town! Instant noodles and canned beans in metallic-tasting tomato sauce, that were my next three meals to come. Pathetic. 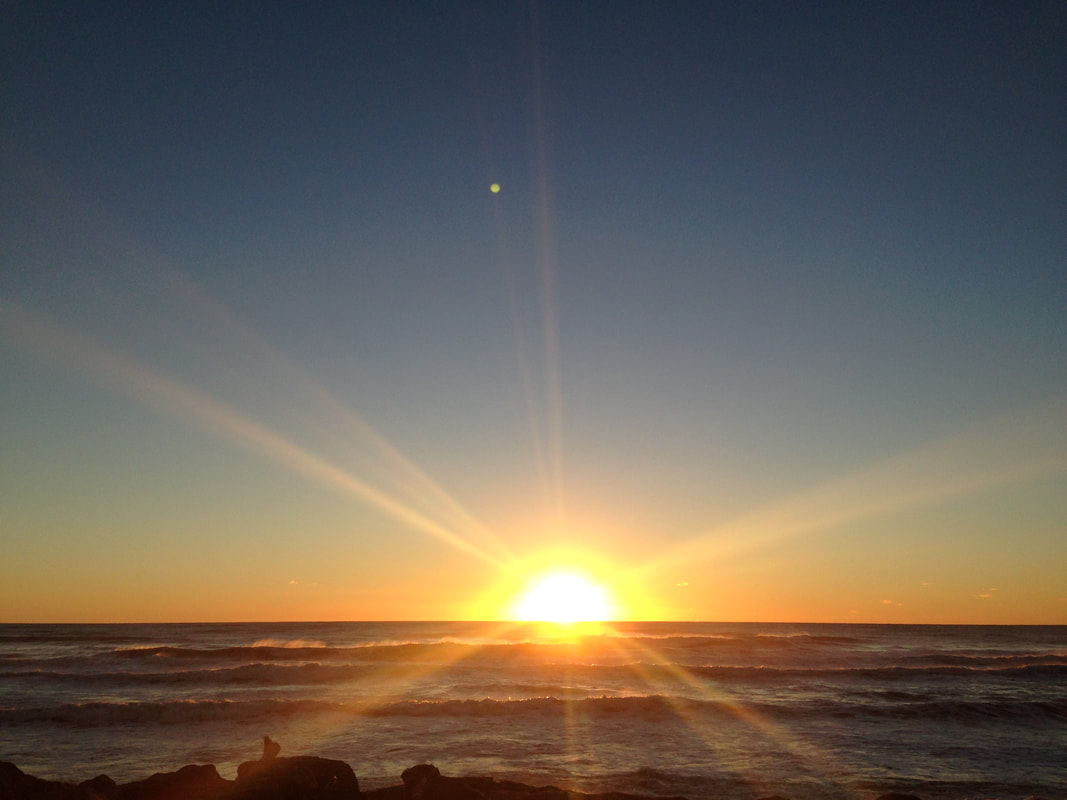 After a breakfast of peanut butter, scooped out of the jar with a knife to be licked off, I couldn’t be less unwilling to explore the outdoors. Rain was slamming against the windows, the winds sang an entire opera. I just sat there looking at my shoes for about an hour until I finally pushed myself out, hidden under a crappy broken poncho and Gore-Tex. Pancake Rocks, I guess?

​The cloudburst couldn’t wash away the crowds. I kickboxed myself through the Japanese flesh mass with tele-lenses sticking out, making the exact same photos everyone else has. Beautiful photos though, don’t you agree?
For the geeks among us:

The unusual shapes of the odd Pancake Rocks are the result of weathering. About 35 million years ago, the creation of limestone commenced with millions of tiny skeletons and shells of marine animals falling to the bottom of the sea. 10 million years later the limestone was being formed in an alternative place: on the seabed. Massive amounts of sand and mud eroded from the land, crushing tiny fragments of marine organisms with enough force to turn them into limestone. This continued for another 15 million years, until an uplift of the limestone from the sea bed came into motion during a massive warping, uplifting and downthrowing the land. A process that continues until today.

Where this area used to be a beach covered at high tide, the land has now been uplifted to its current position above sea level, the rocks largely stripped of beach sands and gravels that used to cover them. The pancake structure is believed to be obtained via a process called ‘stylobedding’, referring to the natural mechanism of shell and skeleton grains being buried, compacted and put under a strong pressure, resulting them to transform into solution. Some minerals subsequently formed thin seams of mudstone in between the limestone layers, creating the layering effect.

​
Just down the road you can find the Punakaiki Cave, which is exactly what it says it is. No exciting wildlife sightings or underground explorations here, but a cave is a cave and caves are cool. Can’t argue with that.

Subsequently I followed the beach in order to reach the Truman Track, which sounds more bad-ass than it is. Admitted, these ten minutes are definitely worth the little walk, but it doesn’t answer the call for tramping adventure you might have when booking your ticket to NZ.
The Paparoa National Park certainly does. By time of writing, 2018, its tracks are being developed as one of the heavily promoted New Zealand Great Walks, so this is the time to explore before the masses invade. In fact, I was the only one I saw on these trails that day, as the fancy i-Site Visitor Center had advised everyone about the trail’s inaccessibility due to storm damage. To me that sounds like an open invitation really. More adventure! More challenge! Not an obstacle I can’t climb.

In order to make the most of my day I decided to grab the mountainbike of my Couchsurf host Fergus I temporarily moved in with, racing and sliding through the mud towards spectacular sights full of green and wildlife.
Suddenly I made a swift turn towards a place called Cave Creek. I threw the bike over my back and jogged down, all the way down into green-covered cavern edged by a moist river bed. It seemed like there hadn’t been anyone around for a long time. I felt the seclusion, far away from civilization, trapped in a mystical bubble that strangely enough had some eerie vibe to it. I lay down on the rocks and tried to breathe in its calming energy, but somehow I felt uncomfortable. Something pushed me away. That night, while Fergus’ face lit up by the dancing fire I listened to his story about the history of this very specific place.

In 1995 fourteen students found their brutal death here after a look-out platform collapsed, causing the youngsters to fall forty meters down from the cliffs and shatter on the sharp rocks.

On the exact spot where I was resting lay their mingled bodies. How is that for a campfire ghost story? 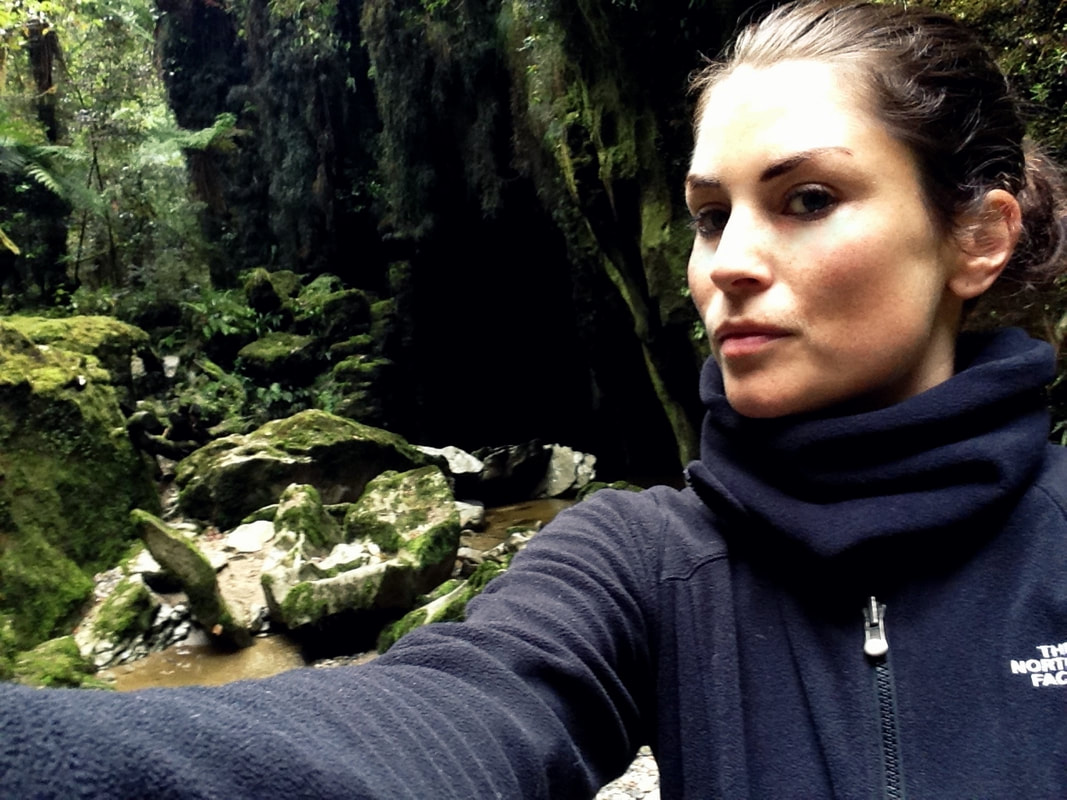 Right where I made this selfie.


It was time to go. The traditional gold-mining town of Hokitika (bring your sieve – you still might get lucky!) 1,5 hour down the road begged for further exploration. Within a fraction of a second two Indian men had picked me up to drive me straight to the hostel I had booked, the only one in town. From 20-40 inhabitants it suddenly jumped up to 3600, but still small enough to market it as coollittletown.com... well, let’s see about that!

Little it is, they didn’t lie. Within one hour I had seen the hardly fascinating glow worm dell (outdoors, so it must be explored at night I assume), the dark beach full of log wood and some forgotten churches. It’s rather inspiring to see the purple-orange horizon set behind the snow peaks of Mount Cook at the popular Sunset Point, but I quickly realized the real treasure is to be found outside of the sleepy town of Hokitika.
And that’s exactly where the shoe pinches: Unless you travel with your own vehicle, there’s no way of going there. Thumbs will help however: A miner called Michael had soon picked me up and decided to just drive me up and down the touristy attraction he lives right next to but didn’t visit for fifteen years: The Hokitika Gorge.

You don’t know blue until you visited this spot. Emerald, celeste and all its divine subtractions... glaciers work true magic on its discharging waterways. 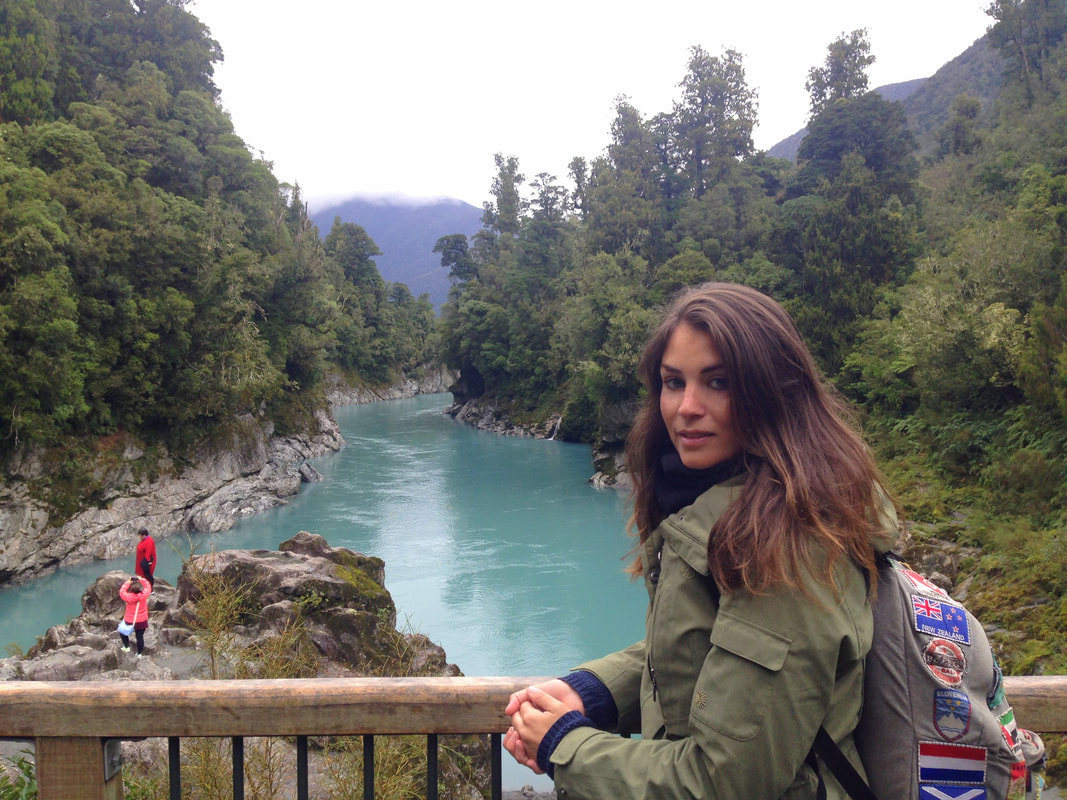