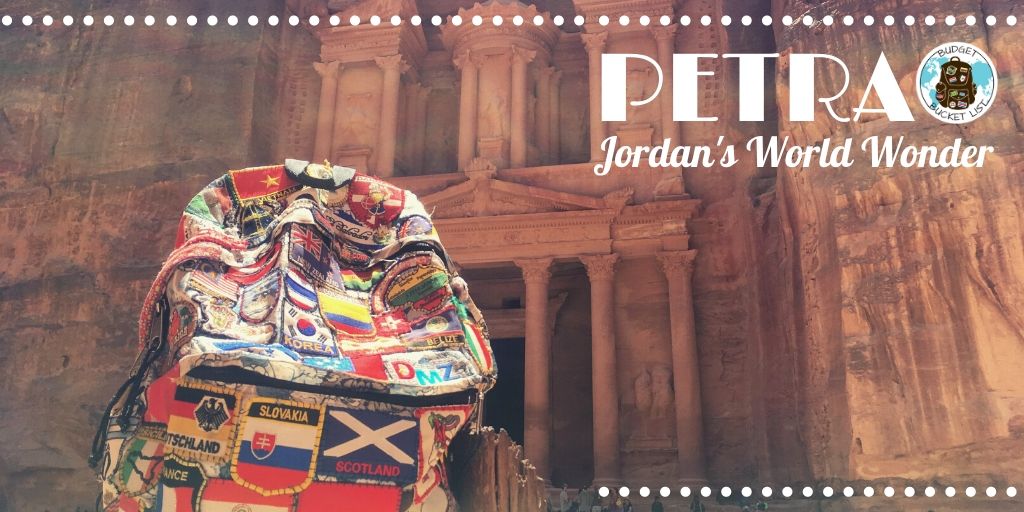 You’re right, there’s absolutely nothing original about visiting Petra. You are not the first, not the last and you will definitely not be the only one there. ‘Beaten’ doesn’t even start to describe the trails circling around the ancient sights you have seen before on a thousand travel shows, blogs and vlogs, and your photos have been taken by others many times before… by half a million visitors a year, to be exact. The ultimate tourist trap, Jordan’s most significant cash cow where locals pay 1 dinar and foreigners 50…

But hey, you know what? If you stand in front of one of the Seven World Wonders that somehow is an expected and foreseeable part of the experience, so you fucking grow a pair and join the circus.

Petra, big fat check on the (not-so-budget)-bucket-list!
Hmmmkay, so how do I get there?

Where Jordan’s public transport system leaves a lot to be desired, obviously reaching its main attraction isn’t the hardest obstacle to overcome. Most tourists without their own vehicle choose Jettbus, which drives straight from Amman and Aqabar without stopping along the way… Jettbus leaves Amman daily at 6:30AM from the Jettbus station in Al-Abdali, arriving in Petra at 11AM. From Aqaba it leaves at 8AM from the Jettbus office. It’s advised to book ahead online or via their office, as there’s only one bus a day. In case you just want to take a Jettbus from Petra to elsewhere in Jordan, guarantee a seat by reserving at the tourist desk upon the entry of the park. There’s one Jettbus leaving for Petra from the Wadi Rum visitor centre at approximately 10AM (flexible – so be there early).

Local (mini)buses cost about half the price but take twice as long, leaving whenever they’re full. The same principle goes for shared taxis, that about equal the price of Jettbus. In case there are empty seats, they might request you to pay for those too in order to leave, which makes it a less-than-ideal option. In Amman they leave hourly from the South Bus Station (Wihdat), in Aqaba they leave from the bus station until midday.

I reached Petra by my own personal favourite: hitchhiking… straight from a tent camp in the Wadi Rum desert to Wadi Musa. Free, fun and with a welcome pinch of added adventure. 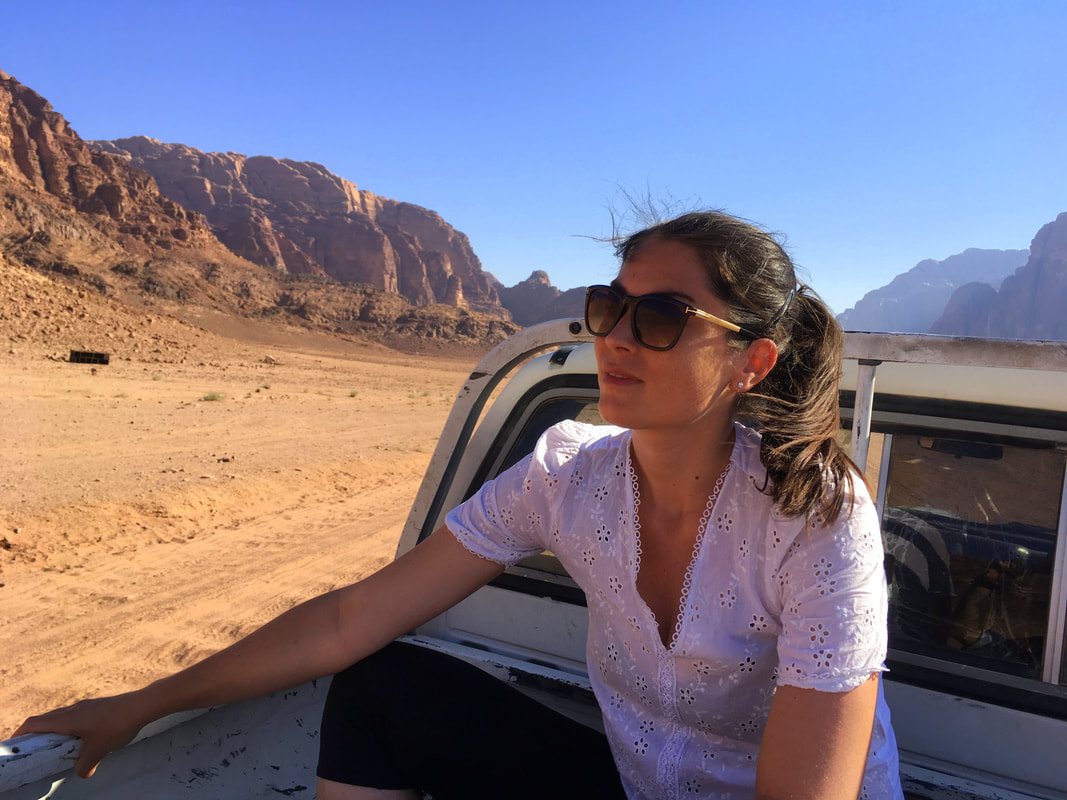 Where do I stay?

If, like me, you are a fervent follower of ‘An Idiot Abroad’ you might, also like me, hold the idle hope to spend the night Bedouin-style in a cave facing the world-famous Treasury. Allow me to crush that dream for you. However, do relax, as accommodation will be the least of your worries. Wadi Musa, a village named after Prophet Moses’ water stop and once famous for its role in the Arab Revolt against the Turks, now mainly serves the purpose to house and feed the untamed herds of tourists daily raiding its adjacent sight (at walking distance). Surprisingly, the prices weren’t as elevated as I anticipated and I paid only 5,5 dinars for a night in my own ‘capsule’ (Petra Capsule Hostel). Restaurants and supermarkets are all over town, and as I stubbornly stuck with my vegan falafel kebabs, I energized myself for about 4 bucks a day. 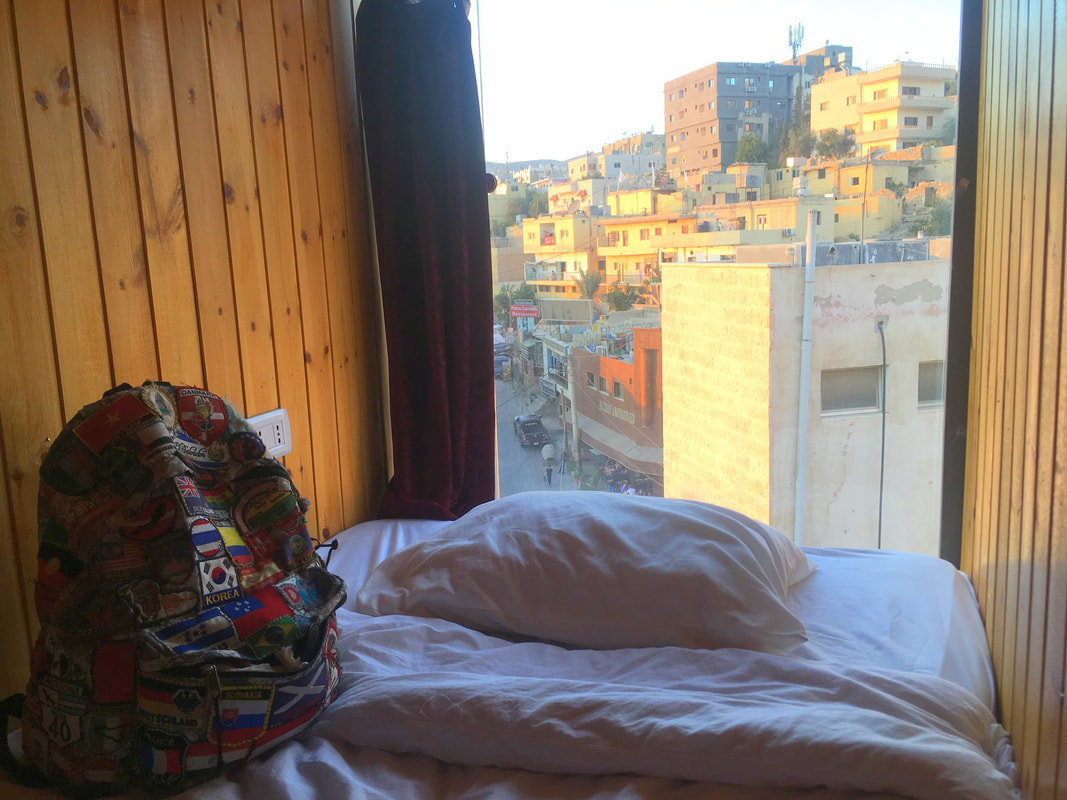 Back to business: Petra… How, what, when?

Okay, this is the time to pay attention, as I will hereby allow you to learn from my mistakes: Before you enter Petra… before you enter the damn country, buy a JORDAN PASS. You can choose between three different packages, all including the visa, attraction entries and a visit to Petra… its value mainly determined by the amount of days you decide to spend in Petra. If you enter via Amman, you will save a shit-ton of cash here. If you enter via Aqaba, please do the math of your itinerary finances in advance, as visa fees are waived from this entry point.

Petra opening hours are:
So, how many days should you spend in Petra? It basically all depends on how fit you are, as all these trails are to be hiked (in boiling hot and dry desert conditions – mind that) and the sights are pretty far spread out. Sure, you can join the league of the lazy and take a horse or a donkey… but you’re a good guy/gal with high ethics and shit and a heart for animal welfare, so you really don’t want to be that person. Generally I’d say that a day is definitely not enough if you want to see at least 75% of the attractions. I easily managed to walk almost every single trail of Petra in 2 days (during the hottest time of the year – July/August), but I must add entirely brag-free that I’m a pretty fit and trained walker that after Jordan walked another 900KM from France to Spain without any physical problems. Evaluate your level of fitness (the main trail is flat, but all others entail steep inclines), your desired itinerary and settle with 2-3 days max. 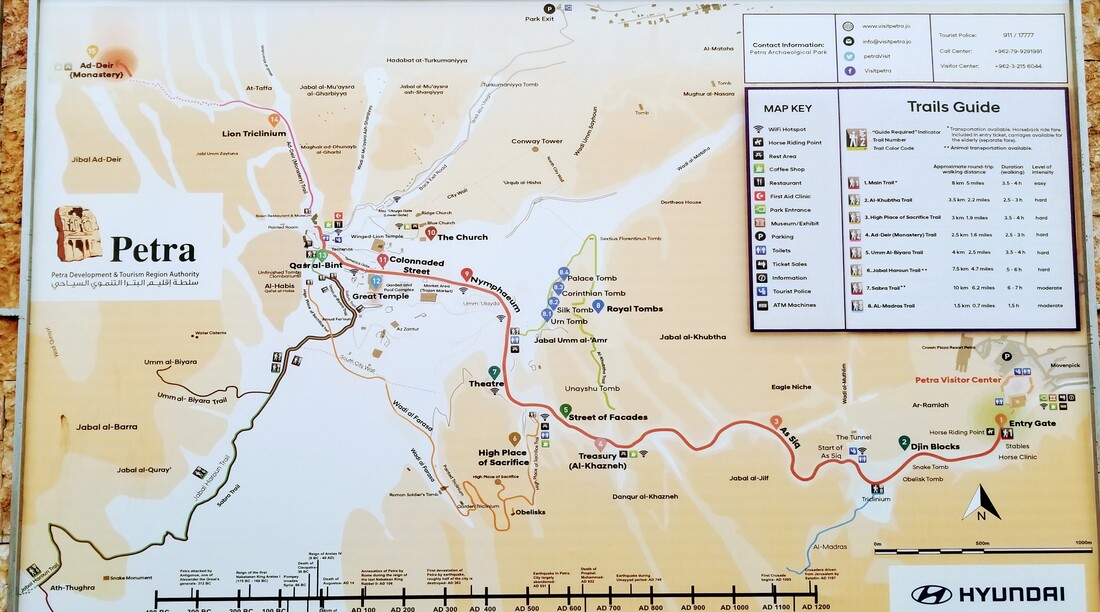 The Most Important Trails

As is usually the case, the trail times provided are worst-case scenarios… just so that people of a certain age, body weight or slightly less healthy lifestyle don’t find themselves stuck inside of the park before the gates close. However, you, beautiful, fit, vigorous god(dess) that you are, will complete the trails in about 25-30% of the walking time provided, trust me. To give you a clearer idea, I timed my actual walking times in the most draining season of the year:

You can’t avoid this one, as it’s the one you’ll have to take to enter the grounds of Petra in the first place. As such, this entirely flat and easy trail will be over-crowded and suitable for anyone from children to the elderly to the handicapped. It passes along several (but definitely not all) of the main sights, such as Siq, Street of Facades, the Theatre and the postcard-friendly, world famous Treasury (Al-Khazneh). It looks quite long on the map, but in reality entails only 4KM (which you will have to walk both ways though). I walked it in exactly 49 minutes instead of the 3,5-4 hours estimate. It gives a nice overall overview of Petra, but merely scratches the surface.

Alternatively, one can enter via the hardly used Nabataean Tunnel Trail on the right side just before the Siq (bypassing the Treasury and Royal Tombs completely). Initially used a rainwater rerouting system (away from the Siq and down into the city), also in current times this magnificent piece of engineering might be prone to unexpected flash floods. Only enter with 100% dry weather previsions.
Ad-Deir Monastery Trail – 2.5KM return [moderate-hard]

Get ready for the real deal. If you have time for only one extra trail (because you made the mistake to only visit 1 day, for example) make sure it’s this one. Easily accessible at the end of the Main Trail, this one leads further up to that other famous sight you have most definitely seen before on 1001 social media channels: the (du-uh) Ad-Deir, the Monastery. When I say further UP, I most definitely mean up-up-up! You’re gonna feel this one in the legs, so stretch up, you hiker! Don’t be too scared though, it’s indeed more declined than the no-fitness-level-required-main-trail, but most certainly not as hard as the vendors of donkey rides make you believe it. I was up in 29 minutes instead of the promised 2,5-3 hours… you’ll have to return via the same route.
Al-Khubta Trail – 3,5KM return [hard]

This one is pretty sweet too, as it passes along a wide variety of tombs and all the way on to the most magnificent look-out over the oh-so-celebrated Treasury. Don’t be mistaken though, if you thought the Ad-Dear Monastery Trail was pretty damn elevated, this one is gonna rock your world. I was up in only 21 minutes (instead of 2,5-3 hours), but I was sweating buckets. Also, even with a 50-bucks-entrance-price there’s apparently still room for further exploitation, as some clever Bedouin has privatized the prime viewpoint and will only allow you to enter if you buy his extremely overpriced drinks. Smart, as nobody in their right mind who just completed this devastating climb will have the heart to deny themselves that panoramic award. [Return via the same route.]

Alternatively, a harder to find and as such more adventurous route is provided by the Madras Trail… also known as the ‘Indiana Jones Way’… the route the Swiss explorer Jean Louis Burckhardt took before stumbling up the treasure currently listed as a proper world wonder. The Madras Trail represents the first deviation from the Main Trail, on the left before entering the Siq, and loops over a stretched out desert plain towards the High Place of Sacrifice (which is further than lined out on the map), eventually leading towards an alternative, non-touristy look out above the Treasury. A guide might be recommended. 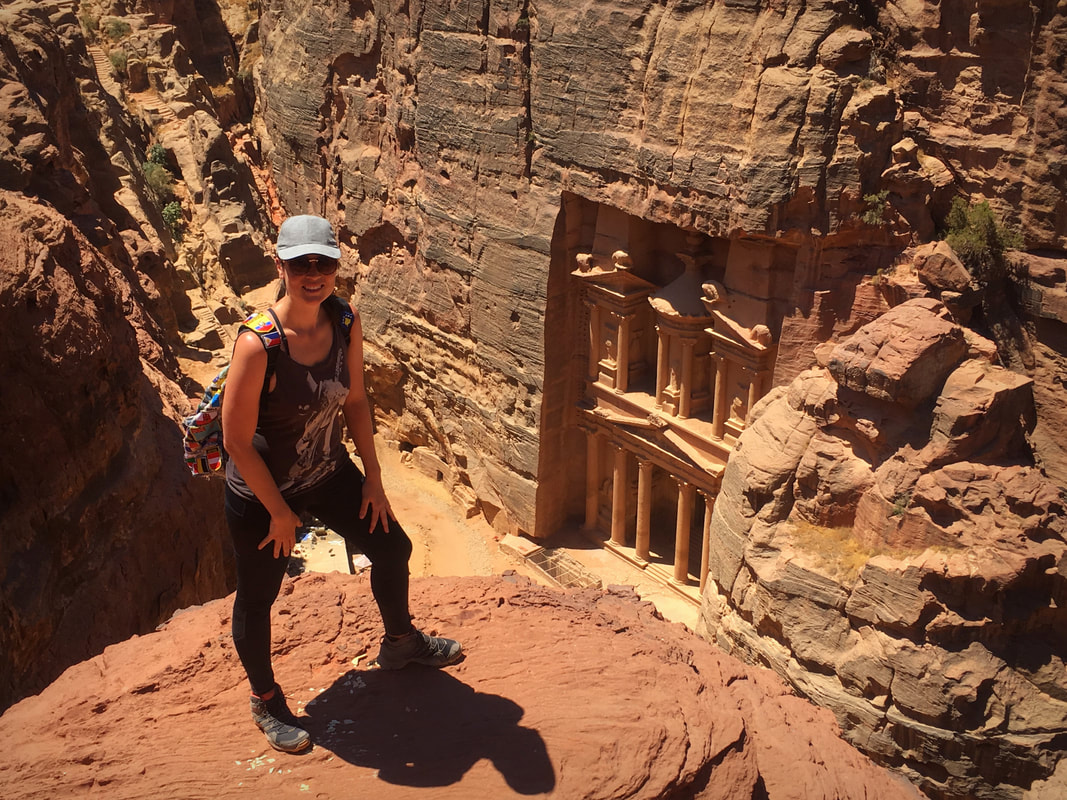 This one kicks off quite clearly, at the left side a bit before the Theatre… but at some point the trail kind of vanishes. You can clearly see where most people turn around (after mounting the steep stairs)… don’t though, because this is exactly where it starts to get interesting, as the crowds finally evaporate. I am not afraid to admit that I 100% got lost here (and hence don’t have a representable hiking time to share with you), the footsteps in the sand going in all possible directions showing me I was definitely not the only confused hiker out there. When the trail splits, make sure you take a steep right and all will be fine. This trail grants a few interesting sights and viewpoints such as the Lion Monument, the Garden Temple, the Roman Soldier’s Tomb and Qasr al-Bint, BUT, most importantly: a series of Geocaches… which might be the only reason I did this one, I’m not gonna lie. You can either loop back, but I suggest you start with this trail and continue on it all the way to the Ad-Deir Monastery Trail (so you do the roughest part first) and then after completion return via the easy Main Trail to grant your tired legs and easy return (and if you’re not tired at all, add the Al-Khubta Trail to the equation).

Alternatively: Just before reaching the Ad-Deir Monastery trail, the High Place of Sacrifice Trail interferes with the moderate Sabra Trail (10KM) which you can complete when taking a left. From there you can climb the Umm Al-Biyara Trail (4KM-hard) and/or continue on the Jabal Haroun Trail (7.5KM-hard), the entire combination-round-trip taking about a day of hiking. If you have time, it provides an interesting insight in the more rural side of Petra, mixing hillside views with local Bedouin culture.
Tips & Tricks
3… 2… 1… aaaaand join the madhouse!
In order to support the travelers’ community, I spend many hours per week to adequately document all information and advices for prospective visitors, accompanied by a (hopefully) entertaining insight into my personal observations and experiences. This service is and will remain free. However, if you voluntarily want to make a contribution and support my travels and thus the creation of new stories and information supply, here is the button you’re looking for:
Donate
Related:
- Why Wadi Rum is one of Jordan's main highlights
​- A brutally honest guide to Petra [Jordan]
- When in Amman... you might as well make the most of it! Check here how!
​- 10 things you can't do in the non-touristy part of Morocco
- Discover Morocco as a travel destination
- Make a Malaysia roundtrip: Kuala Lumpur, the Cameron Highlands, Taman Negara, Penang, Tioman Island, Kuching, Melaka, Miri, Ipoh, and Sabah!
- The deception of northern Borneo: Don't ever go to Kota Kinabalu
​​- Visiting the tiny sultanate of Brunei
​​- Comfortable with the uncomfortable? Bohol & Panglao Island, The Philippines
- Travel Asia off the grid… discover the magic of South Korea!
​- Hiking Poland's longest mountain trail (550km) with a tent: Glowny Szlak Beskidzki - check the reports here!
- Walk like a pilgrim! 6 weeks on the Camino Frances towards Santiago de Compostela / Finisterre (900km) - check the reports here!
​​- Check out Budget Bucket List's FAVORITE HIKING DESTINATIONS worldwide!