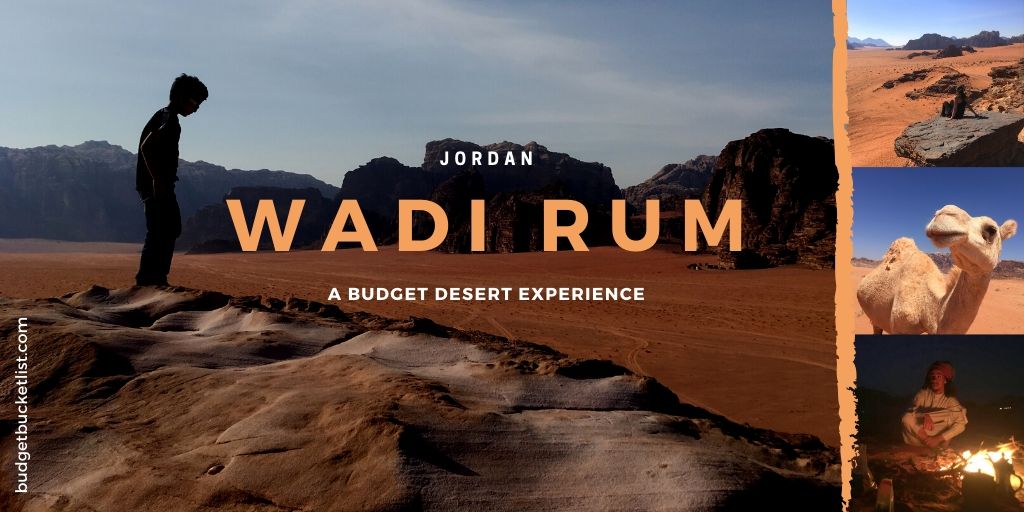 Deserts arouse an almost magical connotation. It’s not the plain reality of it (a wide, scorching marshland of sand and dryness), it’s the concept of its extreme yet mesmerizing conditions, overwhelming but at the same time calming… The absolute victory of Earth over human control and amendments, with on the other end of the spectrum mankind’s tireless attempts to adapt to such extremities anyway, inspiring mystic myths and laureated legends like 1001 Nights and Ali Baba.
​
It’s only logical that a country as incomprehensibly hot and parched as Jordan (level: fry-at-first-sight) has a desert too. One could argue that the country basically is one big dusty desert as a whole if you take all forms of urban development away… which is yet another reason to plan a visit. Yes, of course, you have Petra… but this ancient settlement is more and more feeling the fiery breath in its neck from upcoming tourist-topper Wadi Rum, increasingly considered an almost obligated stop on the Jordan itinerary.
How do I get there?

A pretty simple, straight-forward question with nevertheless a multi-faceted answer. The good news is that Jordan, outside of Petra, isn’t really developed yet as a tourist destination (yeaahhh you’re a pioneer!), and the bad news is that Jordan isn’t really developed yet as a tourist destination (boohoo, complicated times ahead!). Public transport is one of those universal pain-in-the-asses a visit to Jordan brings along, in case you don’t have the budget/mindset to rent your own vehicle or pay for an of those organized and grossly overpriced ‘Jordan-in-so-many-days-tours’. To reach Wadi Rum you have broadly 3 options:


All these options, except of a private un-shared cab, will leave you eventually at the Wadi Rum highway intersection, from where it’s another 10KM to the desert entrance. You can either take a cab or hitchhike.

Once you went through all the efforts to reach this mind-blowing destination, you want to make sure to get the most out of it. Where I normally stimulate my readers to avoid tours, and instead go out by themselves to experience as much as possible on their own initiative, this time I discourage anyone to do so. Simply because it’s the freaking desert we’re talking about, which looks all cute and pretty in picture books, but it can fucking kill you if you don’t know what you’re doing. Luckily, there are plenty of locals here who do, as this is what they call a home… people that are known in this world as the Bedouin. I’m not even going to tell you what an unforgettable experience it is to form a short-term component of their pack, because you already bloody know just by the mere thought of it. Those are the kind of travel stories you want to take home and tell your friends, there’s no way of denying it.
Plus, this is how you’re able to see all Wadi Rum sights the most convenient and kick-ass way possible (by 4x4 jeep)… because let’s face it, you weren’t gonna walk that shit, and even if you were: the roasting slap-in-the-face-microwave-heat would beat that idea straight out of you brain. Sights your temporary Bedouin-buddy will drive you too (fixed stops):


Warning: After a report of sexual harrassment of some of the guides towards a solo female traveler I have per direct decided to terminate the cooperation with the local Wadi Rum company I previously trusted in. Contact me for more details. Stay safe.
Accommodation Options

Okay, this is were stuff gets really interesting. Some people decide to only visit for a compact daypart, probably as part of some kind of Jordan-package-deal… but all we can do is pity them. If you were impressed by Wadi Rum during the day (and you 100% will be), embrace yourself for the nightly experience… Yes, I’m building up to this: You’re going to sleep in a BEDOUIN TENT CAMP! *Drum rolls, hysterical clapping, audience cheering!* Honestly, if this doesn’t almost give you a heart attack out of pure excitement, I don’t think we can ever be friends. It is as mind-blowing as it sounds, as obviously you won’t be staying in some crappy Decathlon pop-up tent half blown away by desert whirlwinds, but in a proper Bedouin creation made of colourful carpets while camels are literally strolling past your sleeping spot. My head almost explodes thinking back about it. 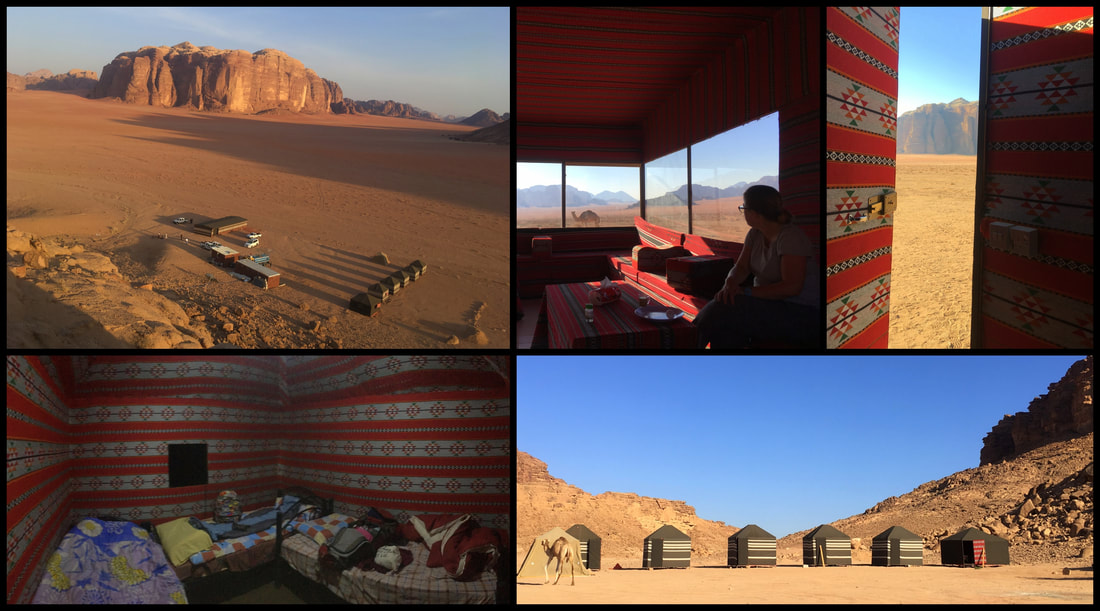 Dinner is an experience on its own, as the collective of desert guides go the extra mile to provide their guests (treated as if they were long-lost friends) with an ancient traditional Bedouin dish: Zarb. Similar to the Polynesian version I experienced in for example Samoa, fresher-than-fresh food is prepared in a dug out underground hole filled with flaming hot coals and covered with blankets and sand. An investment in time and efforts, but with downright mouth-watering results. And all you have to do is lay back and eat it.
As a big chunk of the native Jordanian cuisine is ‘accidentally vegan’, there’s plenty of choice here and you certainly won’t go hungry!

I think I made my point when it comes to being excited about sleeping in a nomad camp tent… So, what if I tell you there’s something even better?! With the risk you might drop dead from an instant cardiac arrest out of pure exhilaration: You can actually go out with the Bedouin and camp out under the stars! Indeed, read that again: In the desert, smack-bam in the Middle East, as part of a nomadic Bedouin tribe, under Jordan’s A-Class star-sky (a shooting-star-frequency of about 3 per minute, including the Milky Way, Northern Star and the entire razzmatazz). This is some serious bucket list material, folks. And a big fat check-off on my side.

Other option: overnight stay in a cave.
Another part of my in total 2,5-day-Wadi-Rum-endeavour that will never leave the miraculous land of personal memories, is the time I spent here outside of the touristic cycle. I can never emphasize enough how heart-warmingly welcoming the Jordanian people are towards foreign visitors. I personally travelled Arabic countries such as Morocco, Tunisia and the United Arab Emirates as a woman, and even though I thoroughly enjoyed these destinations, I sometimes experienced rather uncomfortable moments due to cultural and religious differences (I always dress appropriately with respect to local culture, but f.e. refuse to wear a headscarf for the simple reason that it’s not my religion – in my country I don’t urge female Islamic immigrants to take them off, so in return I don’t want to be forced to put one on)… but Jordan, nothing like that! I deeply enjoyed the overall vibe of mutual respect and a strong sense of ‘togetherness’. Wherever I went in this country, people always greeted me with a smile and more often than not an honest “Welcome to Jordan”, sincerely inquiring if I am enjoying my time on their lands, offering many suggestions and recommendations.

​Also in Wadi Rum I was positively surprised how easily I was adopted in the inner circles of the desert inhabitants. Not only was I invited for tea, shisha and camp-fire-conversations every single afternoon of my stay here, they even invited me without hesitation to a family celebration, for which a goat was slaughtered on the spot for the occasion, everyone gathering around me to teach me how to eat my rice (I’m a vegan) with my hands only.
During these kinds of moments I just have to take a step back and evaluate where life had brought me. Sitting there around a fire, in the middle of a desert, surrounded by Arabic men dressed in crisp white tharbs and red-and-white keffiyeh’s wrapped around their heads, lying on a carpet smoking a water pipe against a décor of a 1001 shooting stars… providing me a bulk of wishes only to be made for others, as right here, right now, I had nothing left to wish for.


​
In order to support the travelers’ community, I spend many hours per week to adequately document all information and advices for prospective visitors, accompanied by a (hopefully) entertaining insight into my personal observations and experiences. This service is and will remain free. However, if you voluntarily want to make a contribution and support my travels and thus the creation of new stories and information supply, here is the button you’re looking for:
Donate
Related:
​- A brutally honest guide to Petra [Jordan]
- When in Amman... you might as well make the most of it! Check here how!
- Discover Morocco as a travel destination
​- 10 things you can't do in the non-touristy part of Morocco
- Make a Malaysia roundtrip: Kuala Lumpur, the Cameron Highlands, Taman Negara, Penang, Tioman Island, Kuching, Melaka, Miri, Ipoh, and Sabah!
- The deception of northern Borneo: Don't ever go to Kota Kinabalu
​​- Visiting the tiny sultanate of Brunei
​​- Comfortable with the uncomfortable? Bohol & Panglao Island, The Philippines
- Travel Asia off the grid… discover the magic of South Korea!
​- Europe's best skiing & hiking: Get your ass over to jaw-dropping Switzerland!