Download File
I looked at my printed ticket to Quito which I bought a day in advance. Yes, it clearly said 11AM. Then I looked at the overweight woman sitting behind the desk of the bus company in question. Her face not hiding her amusement about a stupid foreigner like me who was really thinking this bus even existed. Time in Ecuador can be represented by the famous painting of surrealist hero Salvador Dali:  Fluid, flexible and therefore meaningless. So I took my seat at an uncomfortable bench to wait for the next possible bus to show up and racked my brain about this Ecuadorian mystery I had yet to unravel. 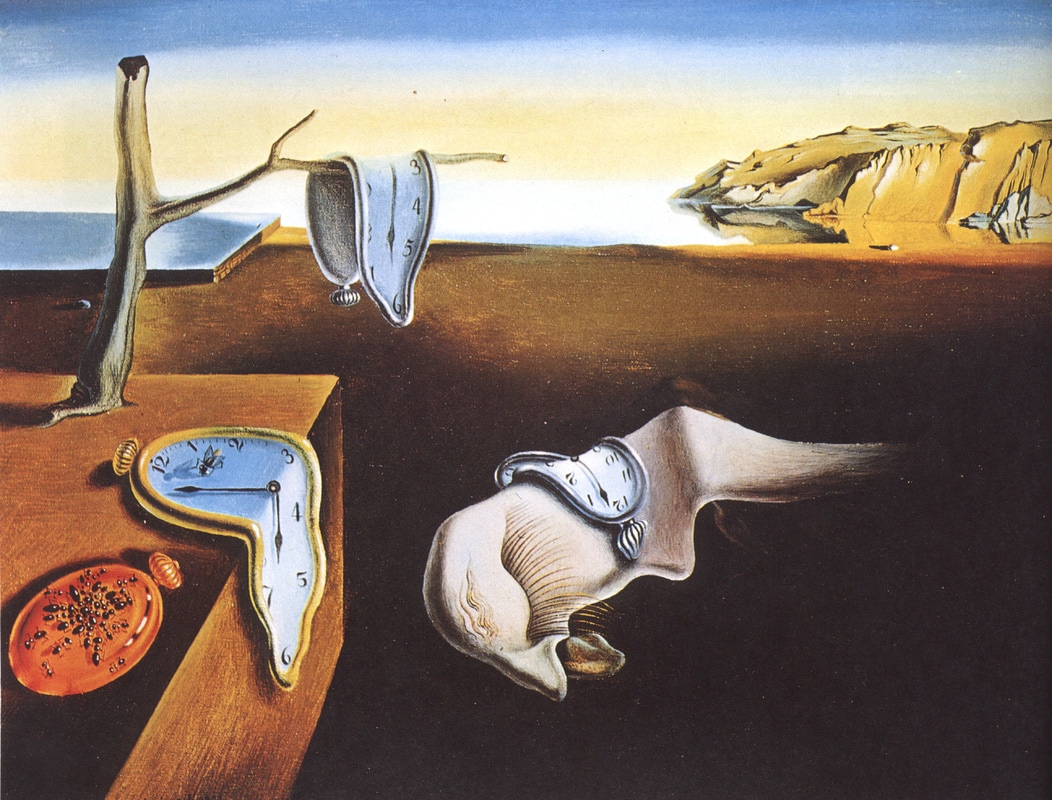 I wasn’t sure what to find in Quito.

I had heared stories about the amazing hiking and climbing possibilities around this capital, like the Cotopaxi volcano, Mindo and the Quilotoa loop.

Thumbs up, however, I had just injured my knee during a canyoning adventure and I was now limping my way around town. Me going on these incredible hikes was as likely as me having the munchies after a cake which appears to be a spacy one, choking on three bananas crammed in my mouth to beat the sudden hunger, passing out and opening my eyes while undergoing a mouth-to-mouth resuscitation from Bradley Cooper who appears to be looking for a wife and finds me suitable. In short, unlikely. 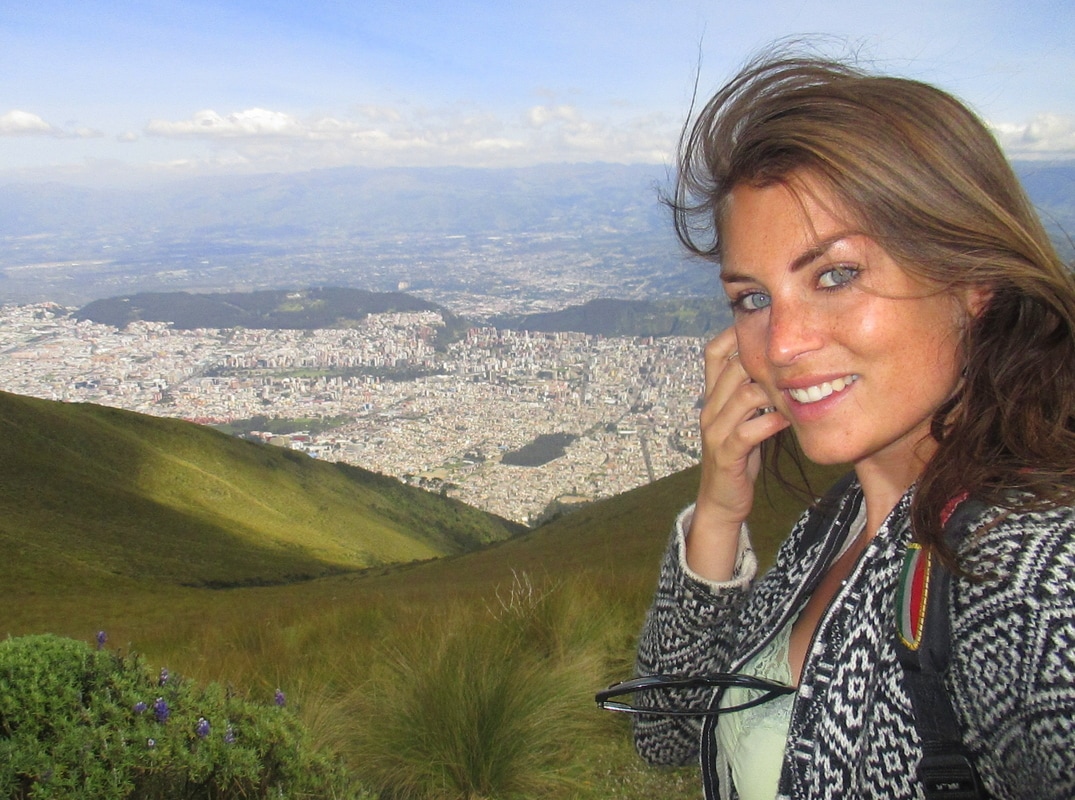 ​Before I could be worried about that however, I needed to head downtown from the southern bus terminal, which seemed to be 1 hour away. As a cab was 10 bucks and public transport 25 cents I choose to be a cheap Dutchman once again. However, when I saw several poor men eyeing me with a mixture of greed and anger, I suddenly remembered the story of a fellow traveller who got his backpack cut open with a knife in Quito’s public transport and lost everything. When these men on purpose started to bump into me I decided to listen to the voices in my head screaming “Turn around, Stephanie, TURN AROUND”. I negotiated the taxi price down to 5 and drove until I saw my Canadian travel buddy Josh walking down the street. 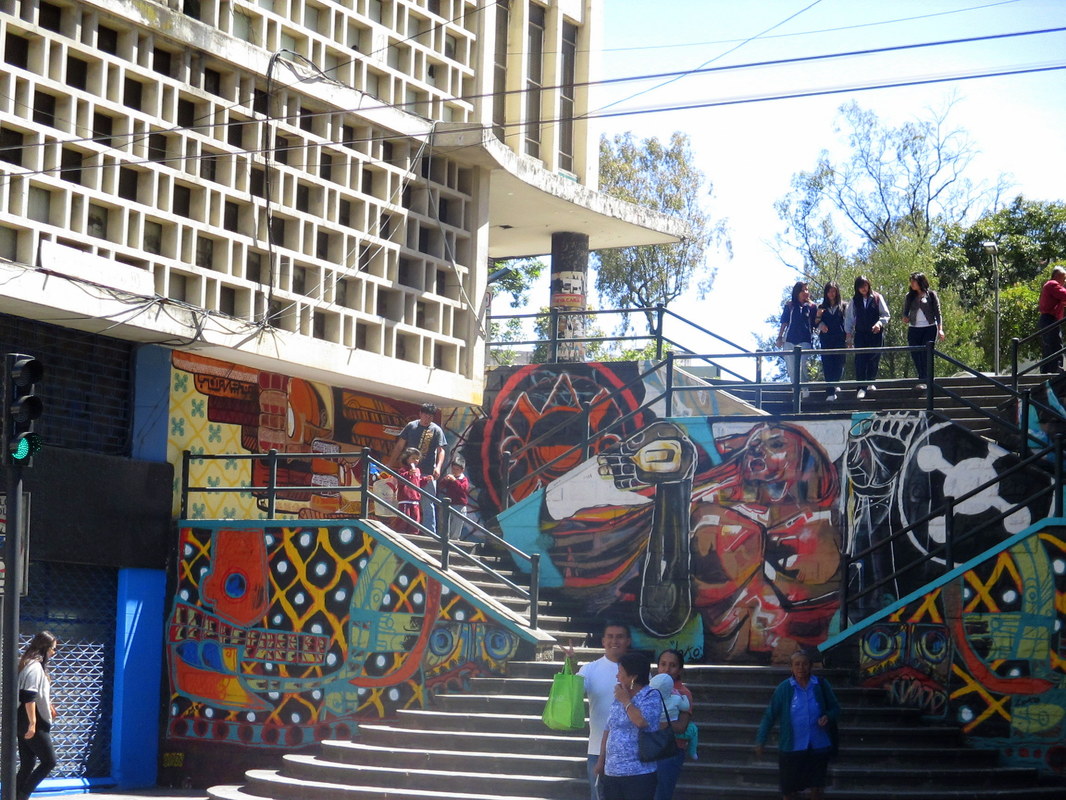 ​My first day in Quito I spent with my leg up in the hostel garden, entertained by the gorgeous New-Zealand surfhunk Kieran who worked here for a month via Workaway. As doing nothing is more difficult for me than doing six things at the same time I decided to join him and two other work-and-travellers for an overnight trip to Otavalo. They formed a fine selection: English guitarboy Nick who would be the first candidate to be called for an Oasis reunion; Canadian Nathanial who looked like the result of a viking and a polar bear having sex, wearing a kilt 24/7 and always travelling with a hash pipe, bottle of whiskey as well as a comb to brush his beard; and Kieran who probably caused the average attractiveness level of New Zealand to drop as soon as he left the country. 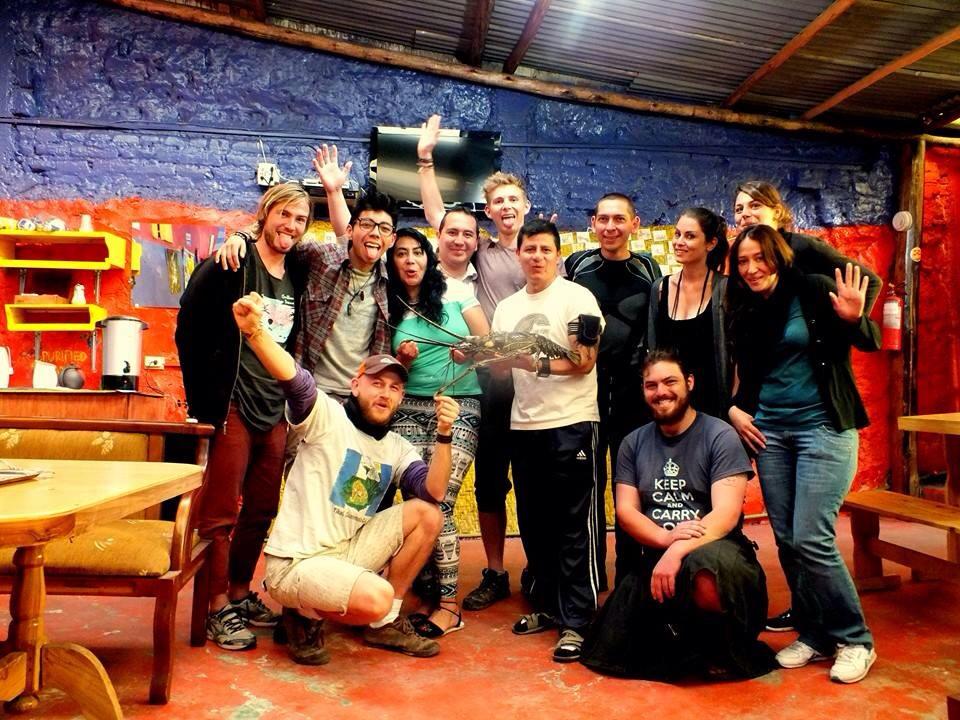 ​In the bus an Ecuadorian fashion photographer from the States joined the group and topped it off. 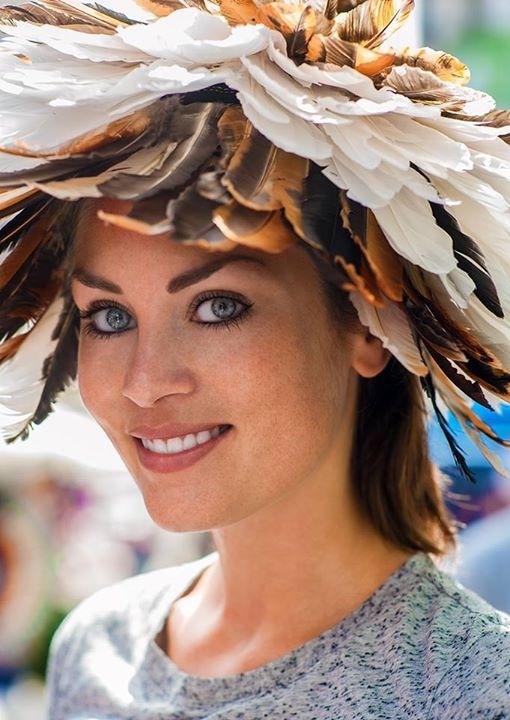 Who shot this amazing photo of me
Credits: www.julioetorres.com
​After we found some last minute accommodation we decided to hurry to the bar to catch up with happy hour. Every other cocktail made Nathanial look more and more like Alan from the Hangover and every other beer made the stories louder and funnier. Oh hey there you go, it’s closing time.

Needless to say, the early alarm we set in order to check out the Saturday market of Otavalo in the wee hours of the morning was persistently ignored. Luckily it went on for the entire day, so we were still in time to discover the animal market. This is not a place for the sentimental. Like me. Being separated from the love of my life (my cat Kartoffel) for 4 months now I immediately teared up by seeing piles of caged kittens crawling over each other while biting their skin after yet another flea bite.
Not only cats had a hard time here: the dozens of guinea pigs, bunnies, chickens, struts, dogs and pigs were thrown in too small boxes, held up by their throats by the vendors and dragged home upside-down and alive by the new buyer.

True, it was an unique sneak-peek in the local culture, but I felt sick in the stomach when leaving this market ground. Luckily, this market consisted of many more divisions, one of them being my personal specialty: Clothes, shoes, jewelry and… did I mention clothes? A wave of greed took a hold of me and all of sudden I realized I couldn’t have a satisfying life anymore without the possession of a bright red poncho with a cute little hood. The fact that I already own three poncho’s back home didn’t raise my awareness of the ridiculousness of this situation. Five bracelets, two pairs of earrings, a few scarves, baby clothes for my friends’ newborn and a handful of family gifts later my perfect red-riding-hood-poncho still didn’t reveal itself. Maybe it’s just not meant to be.

Joking, of course it is, the perfect poncho will find me in life when the time comes. 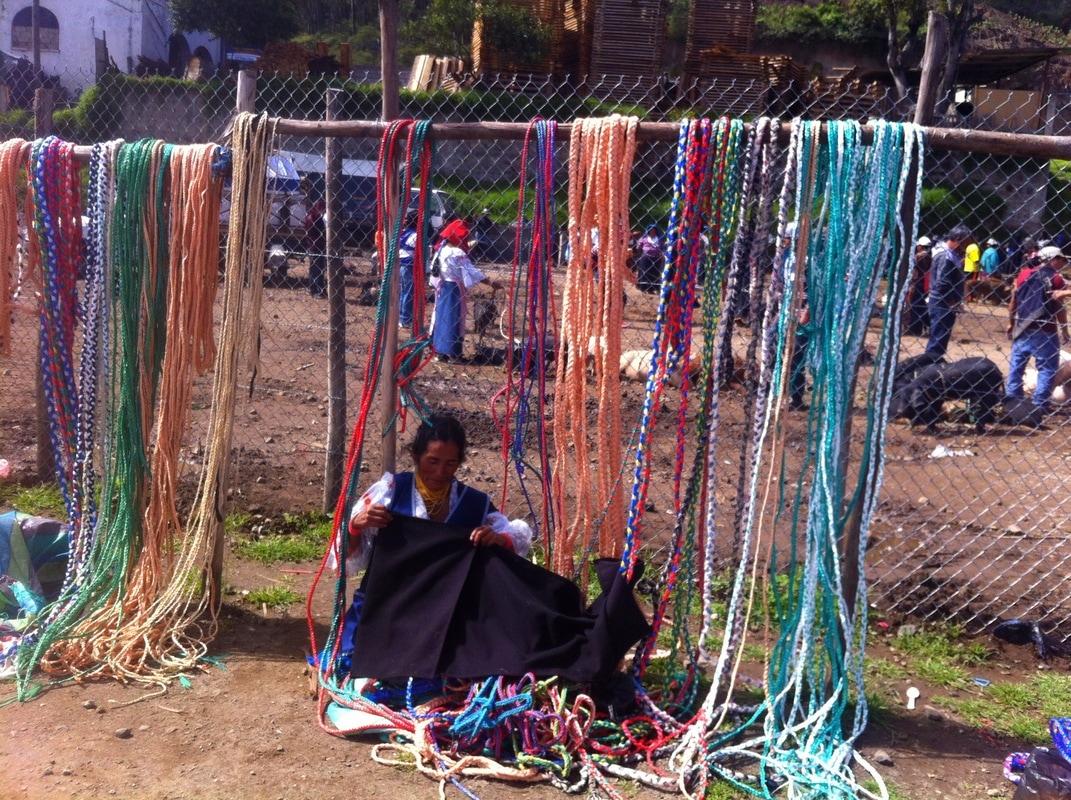 ​After The Best Dinner Of The Hemisphere I felt prepared to hit the Quito bars with the boys. Shouldn’t you take some rest considering your sore kneecap? Off course I should, but you know, alcohol and stuff. I think it’s wise not to throw a detailed description of this wild night on the world wide web, but I’ll give you one clue: free booze until midnight. And so I got my day of rest after all: Sunday I wasn’t able to do anything but to stare into the eyes of something blonde and sporty.

Monday then, would Monday be the day in which I would discover the magic of Quito? Maybe, if you find balancing an egg on a nail magical. Nope, I didn’t run into David Copperfield on a Christmas break nor did I sign up for an evening class at Hogwarts. It’s aaaaall the 0,0,0 latitude, my friend. 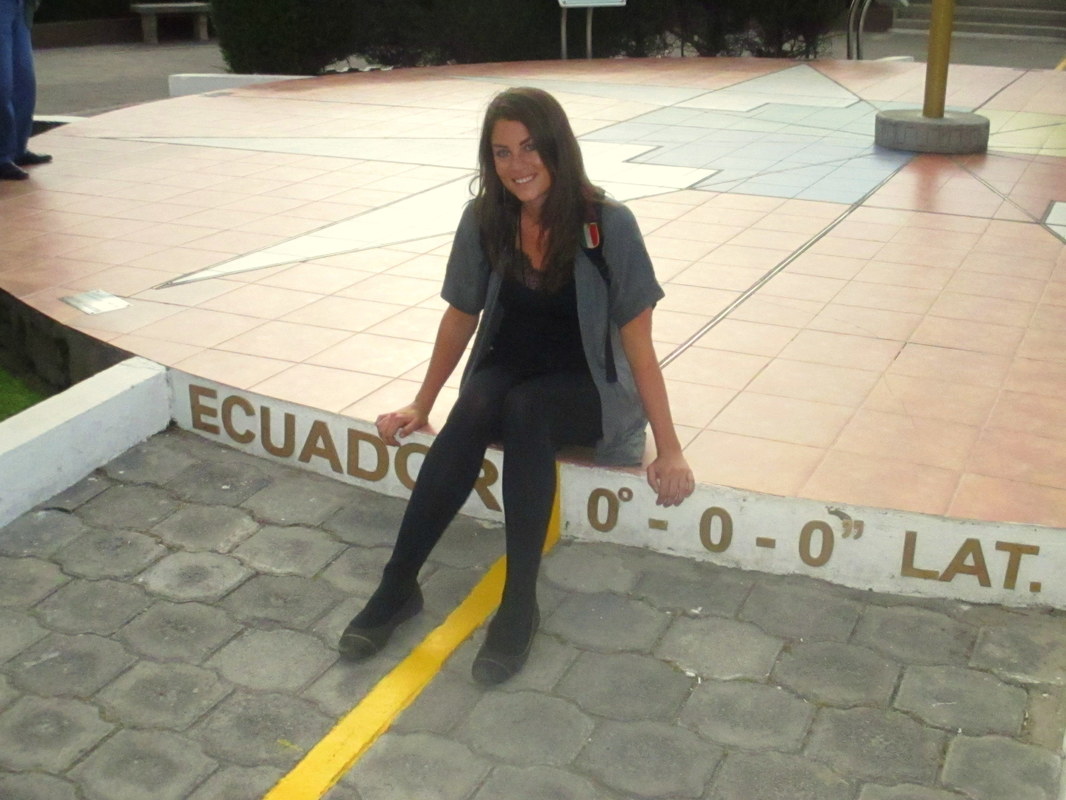 ​The equator from which the country got his name is a place worth visiting. Or so I thought. It’s basically just a random monument and a yellow line… which is also drawn at the wrong place, the real equator is a bit further up. Yeah, ze French took care of it, enough said. So what do you do then? Take a shitload of selfies to pass the time and be cool on Facebook about standing on the freaking equator, indeed.
​Tuesday, last day in Quito. “I should really come up with something good now, as I write a travel blog after all” was my first morning-thought. So after my market breakfast of tortilla de yuca, tamarind juice and my daily shot of morocho I looked for a cab to get me to the Teleferico. The cabs looked very nice. They were full though, all 5000 of them that passed and ignored me. So I hobbled to the Museo Nacional first, guided by a kind rockbar-owner in exchange for a pretend-to-be-my-girlfriend-picture. This enjoyable (and free) museum allowed me to walk through the history of Ecuador, Quito specifically, and was a perfect way to kill some time.

After I spent yet another 45 minutes hailing down cabs in vain, I finally stole someone else’s ordered taxi by faking my identity. My acting classes were a great investment after all. So finally, at the point where I now had seriously screwed up my knee after all the unnecessary walking that day, I was dragged up to the hills surrounding Quito by some non-ski-lift made for gringo’s. It reminded me of La Paz, although there it cost 60 cents and here $8,50… but the views were priceless (yes, I know how cheesy that sounds, but it’s true man).
Although hiking to the Pichincha volcano was a no-no with my handicapped knee, just hanging out at the lush green hill tops was worth going up there. I could have taken a horse to get closer to the fire, but you know… I don’t trust them. So I breathed in the fresh mountain air and enjoyed being on top of the world, after all these nights of enjoying down under.

Quito is a city I grew to like, but it didn’t steal my heart yet. But what the hell do I know, I only scratched the surface.
In order to support the travelers’ community, I spend many hours per week to adequately document all information and advices for prospective visitors, accompanied by a (hopefully) entertaining insight into my personal observations and experiences. This service is and will remain free. However, if you voluntarily want to make a contribution and support my travels and thus the creation of new stories and information supply, here is the button you’re looking for:
Donate
Related:
- Outdoors lover? Banos is your place in Ecuador!
- More nature in Ecuador: Cuenca and its Cajas National Park
- Where NOT to go to in Ecuador: Guayaquil
- Meeting Kieran again: Salento, Colombia
​- Capital cities in South America: Buenos Aires, Santiago, Lima, La Paz, Asunción, Montevideo and Bogotá
- City madness in Sao Paulo, Brazil
- Modern adventures in polluted San Jose, Costa Rica
- Dangerous or incredible? San Salvador, El Salvador
- Slowly falling in love with Quetzaltenango, Guatemala
- Yay or nay? Panama City...
- The ultimate Scandinavian citytrip in Copenhagen, Denmark
- The face of modernity: Frankfurt am Main, Germany
- Nature and culture in the capital: Edinburgh, Scotland
​​- A vibrant city surrounded by nature: Auckland, New Zealand
​- The smoggy capital of Malaysia: Kuala Lumpur
- Getting comfy in the Korean big smokes: Busan and Seoul