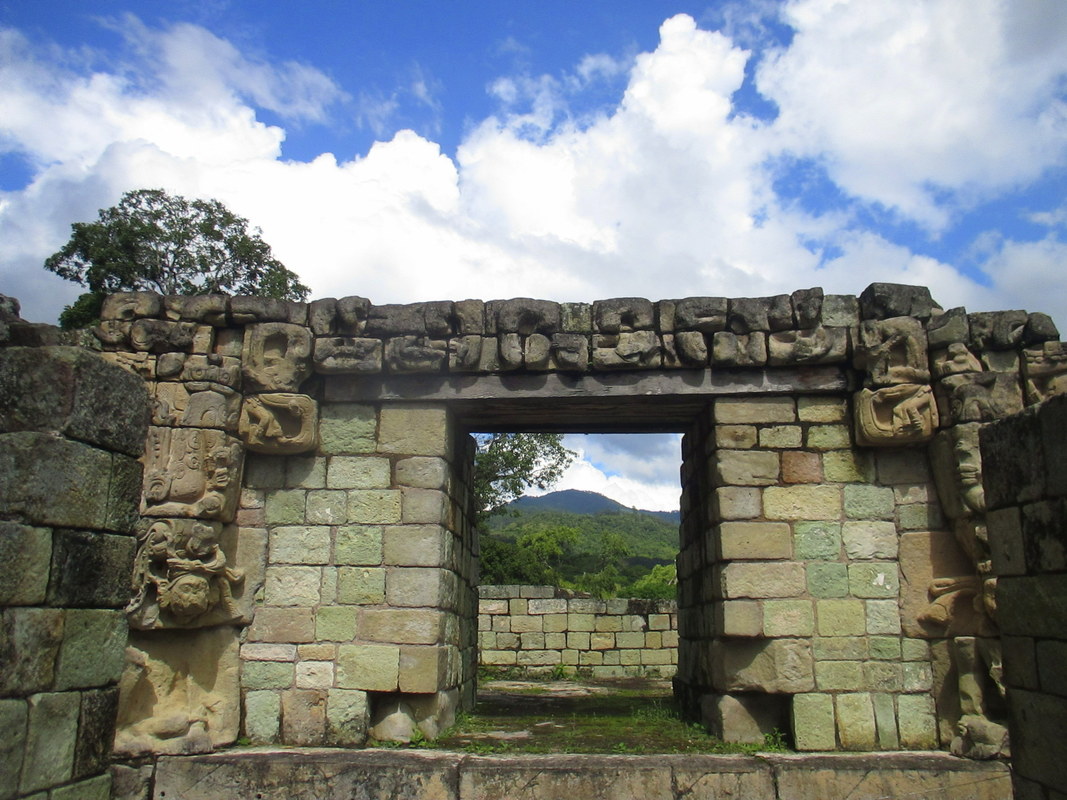 After a nerve-wrecking trip in which I was forced to entrust my life to some maniac driver, I finally ended up somewhere indubitable wonderful right up in the mountains… a tiny place called Copán (Ruinas). In this place lives Edgar with his family. He didn't have an address, but he assured us that everyone knows him and his home. 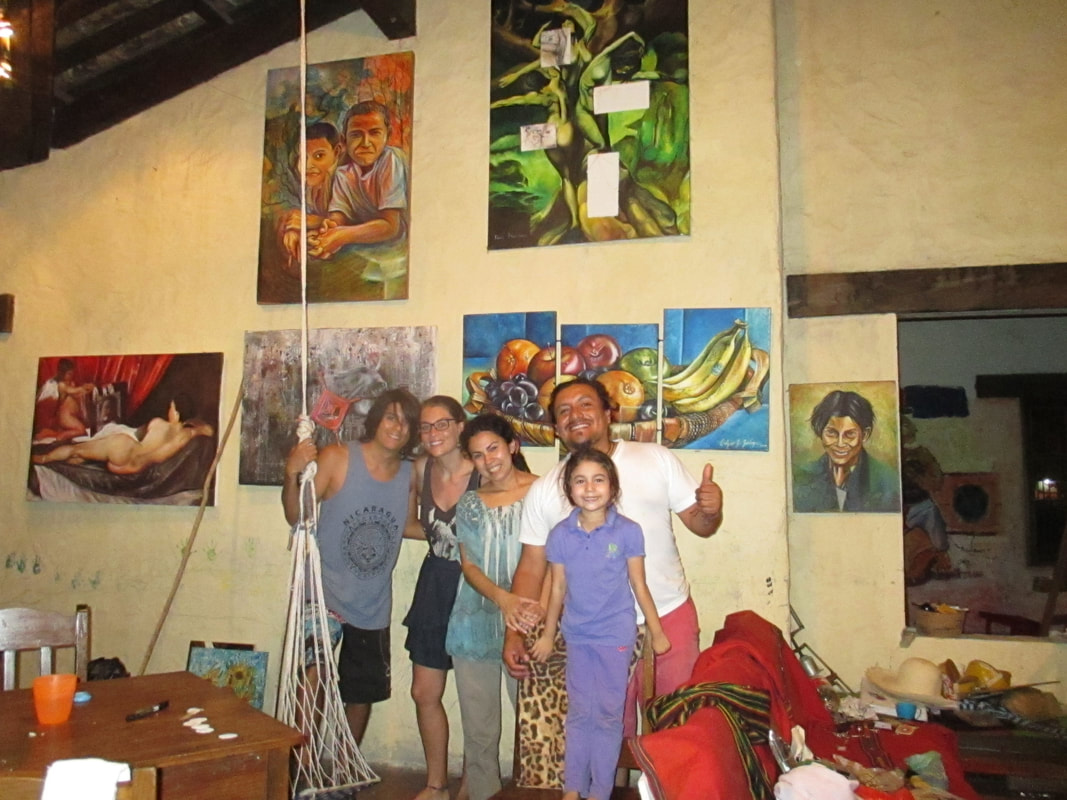 ​After a tuktuk-drop-off I entered his house and understood why. I walked straight into some bohemian, artistic never-never-land, a giant live-in atelier. Dozens of works of art (and not just shitty amateur-shambles, but really talented crafts) decorated the walls, easels with crayon sketches were scattered around in a circle and inspiration for new creations hung in the air. Artesania materials were spread on all tables and couches, as his beautiful dreadlocked wife was working on her jewelry entirely made of recycled material. For an art lover like me I felt like I walked into some utopia, like I won the karma lottery.
Edgar built this giant impressive residence from scratch, including most of the furniture in it, creating enough space for him, his wife, their two daughters Luna & Jade (her pronounced as ‘ga-day’), dog Samba, two baby kittens (with whom I was inseparable from that moment on) and an ongoing stream of travelers.
I was certainly not the first visitor, the entire world and all its nations passed by in the meantime. It explains his wide, open-minded, refreshing world vision. He spiritedly told me, while treating me on the best baleadas I ate in 1,5 months in Honduras, about his new project in the making: a car running on vegetable oil taking his entire family on a trip from Canada to Patagonia, crossing all the Americas. They will sleep, live and home-school in the vehicle while teaching art to people who might not have access to it.

It opened my eyes. I don't have to hand in my free, vagabond lifestyle in order to start a family.

In fact, my best gift to my future kids will be the world, literally. A life like this creates human-beings that know other cultures and lifestyles from experience rather than from untrustworthy secondary sources like one-sided media or prejudiced institutions, which in turns generates tolerance... A thing we obviously lack in our society: Wars and conflict are based on a failure to understand and tolerate why 'the other' does what he does, and a differentiation (us versus them) and subsequent stratification of identities. Just being in Edgar's house and witness his self-designed existence gave me very clear and viable ideas about how to design my own current and future professional and personal life. The seed is planted, now just watch me grow. 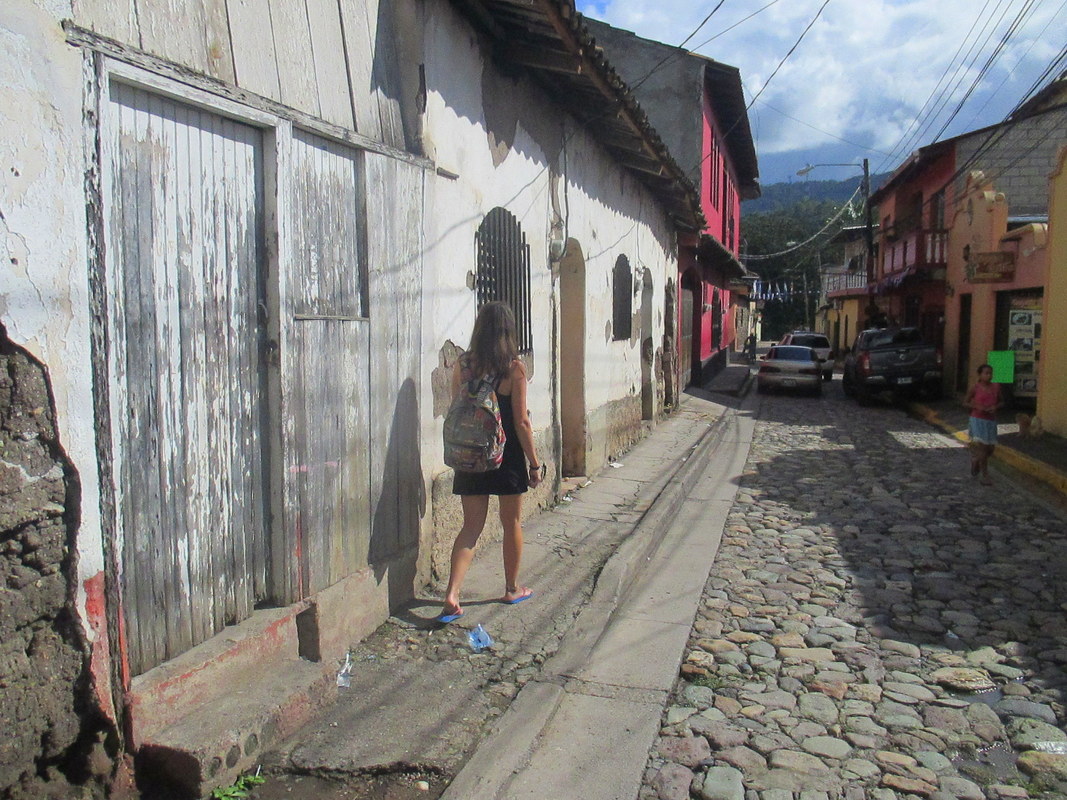 After a night in my own private guest studio, I shared breakfast with the Zelaya family including grandpa, who entertained us with his wide array of Honduran folk songs.
​
I decided to kick off with some exploration of the little village. This was a success as the place is lovely. The cobble stone streets ornamented with little farmers wearing big traditional hats, selling their fresh produce seemed to come straight out of a story book. Of course I optimized the opportunity to experience the local specialty: coffee. I must admit, I wasn't disappointed. Even though most Central American locally served instant coffee doesn't pass the test (which is sad, as most plantations are located here... they just export all the good stuff), Café Copan served a traditional cup of black satisfaction.
​After this inactive, but perfect day I went for an early night to get up at 7AM for the ruins… sung to sleep by the dripping of the rain. That worked out quite differently. At 00:30 my travel buddy woke me up screaming. The gentle rain shower had turned into a deluge. The entire room was flooded, water streamed in tiny waterfalls out of the walls, making us assume a pipe must have broken. My charging phone went out for a swim and as all my stuff was laying on the floor, everything was soaked. As I was barefoot I had to remain seated on the bed-island in order not to be electrocuted. And although in theory I could quietly sit and wait until it’s over, it’s more interesting when being hysterical and freaking out. This craziness went on for a while until the water stopped pouring in after an hour. Then Edgar came home to join the panicking circus. He explained that sometimes with extremely heavy rainfall the sewage system floods and then it all comes down to this room. Ok. At 1:30AM we cleaned most of the water out of the room and hung our stuff out to dry. We put my dripping phone in a bag of rice, as then apparently the Asians come out at night to fix it. That worked. 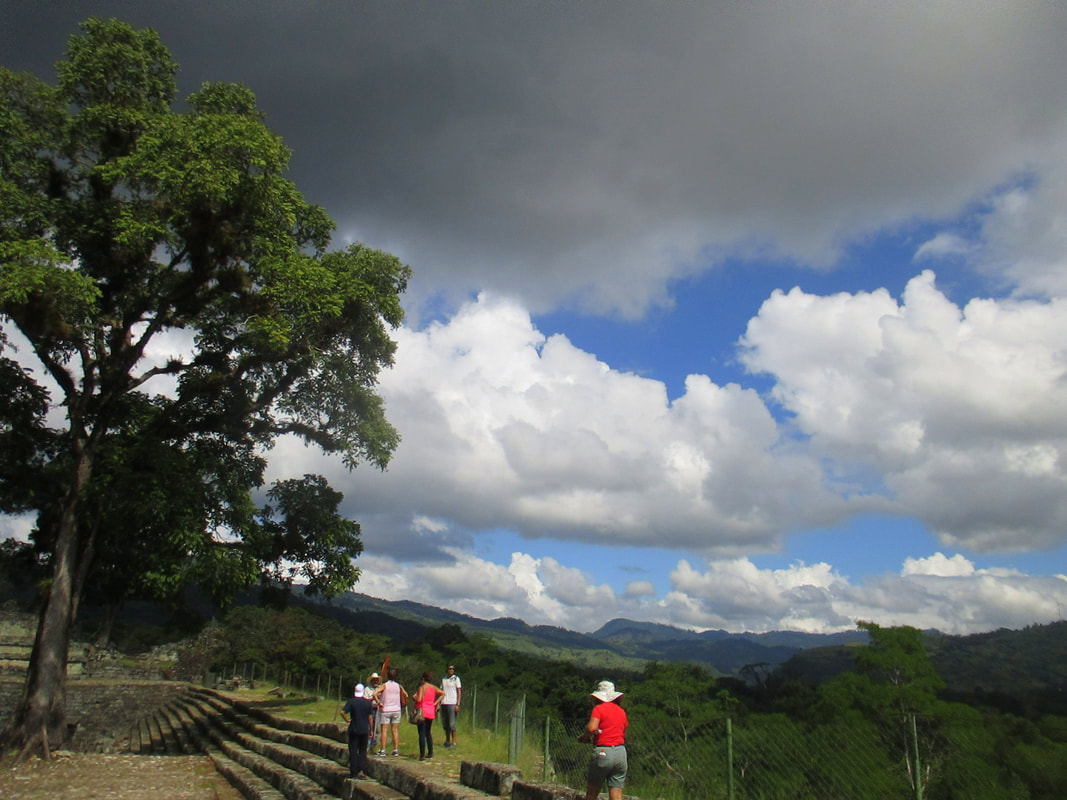 ​After this, 7AM was painfully early. But I went. Edgar was setting up his tuktuk to drop me off (this man doesn’t have a car, he owns a tuktuk – now that’s swagger)... after which I  could proceed with my secret evil plan… MUHAHAhahaaaaa! A fellow long-term cheapo traveller had informed me that at the back of Copán’s ruins park you can easily climb over a gate and skip the $15 entrance fee. Sounds like something I would do. Edgar offered to be my guide in the museum next to the ruins, providing intriguing extensive background information about everything I saw in the museum along the way. He worked as an illustrator for books about these Maya ruins, so he spent a lot of time studying them. And he participated in a Discovery Channel documentary in which he starred as some Lost Mayan King... ​In short, he knows his shit. I wouldn't describe the climb over the fence as 'easy', but I made it. And it was worth it. It was really incredible seeing this entire settlement in such an amazing state. You could almost see the Maya emperor being carried along the majestic buildings, reigning over his community. Living here must have been incredible, you won't find such overwhelming architecture, art and city plans anymore nowadays. And given the limited tools they had, it's fascinating.
Craftsmanship never left Copán. While crossing the border to Guatemala just down the road I touched my new earrings made from recycled materials, by Nelly's hands: A little token from this unforgettable pure feeling of hospitality.
Check out Edgar & Nelly Zelaya's work:
artshop
In order to support the travelers’ community, I spend many hours per week to adequately document all information and advices for prospective visitors, accompanied by a (hopefully) entertaining insight into my personal observations and experiences. This service is and will remain free. However, if you voluntarily want to make a contribution and support my travels and thus the creation of new stories and information supply, here is the button you’re looking for:
Donate
​Related:
- Tranquil Couchsurfing right next to the capital: El Zamorano, Honduras
- Volunteering in a school aimed at HIV-affected children from the slums: Roatán, Honduras
- Beach bums and Garifunas: Tela, Honduras
​- A complicated border crossing: Choluteca, Honduras
- City of Mayas: Tikal, Guatemala
- Maya and Aztec heritage in Mexico: Merida, Izamal, Tulum, Palenque, Oaxaca, Valladolid and Mexico City
- Back to Inca heritage: Machu Picchu, Peru
- Inca museums in Arequipa, Peru
- Inca aqueducts around Cajamarca, Peru
- Inca heritage at Copacabana, Isla del Sol
- The MAAM Museum in Salta, Argentina and its Inca children
​- Where time stood still: Stewart Island, New Zealand’s third main island
​- Budget Bucket List hitchhike trip to... Kosovo!
​- Jordan, a destination on the rise: Extensive guides to Petra, Amman and Wadi Rum