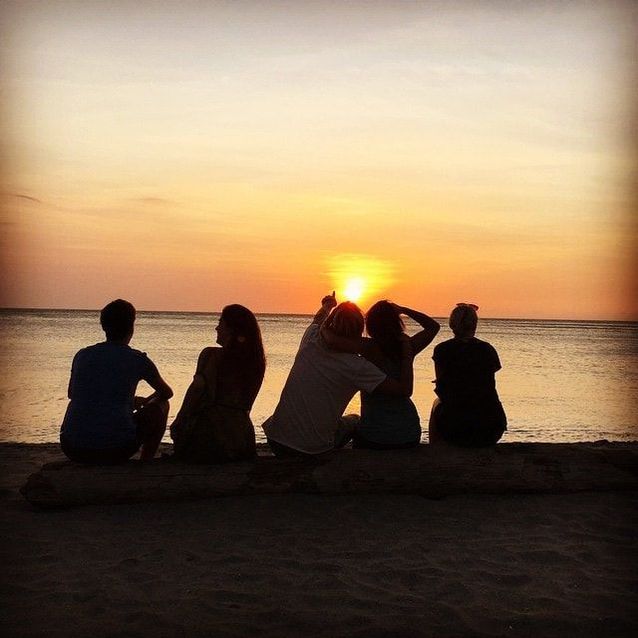 When I asked a fellow traveller if Santa Marta was worth visiting he gave me a serious look and said:

“I have to warn you though, you might not be able to leave anytime soon.”

I asked the bus driver to stop about 15 minutes south of the crowded city centre, as I preferred staying at a recommended hippie-hostel right on the beach: Playa del Ritmo. I saw many oceans bordering the South-American countries, but I never took the effort to travel down to a beach as I assumed they are the same everywhere anyway: Sand = sand, sea = sea and waves = waves. True story, but I almost forgot how happy this combination makes me. 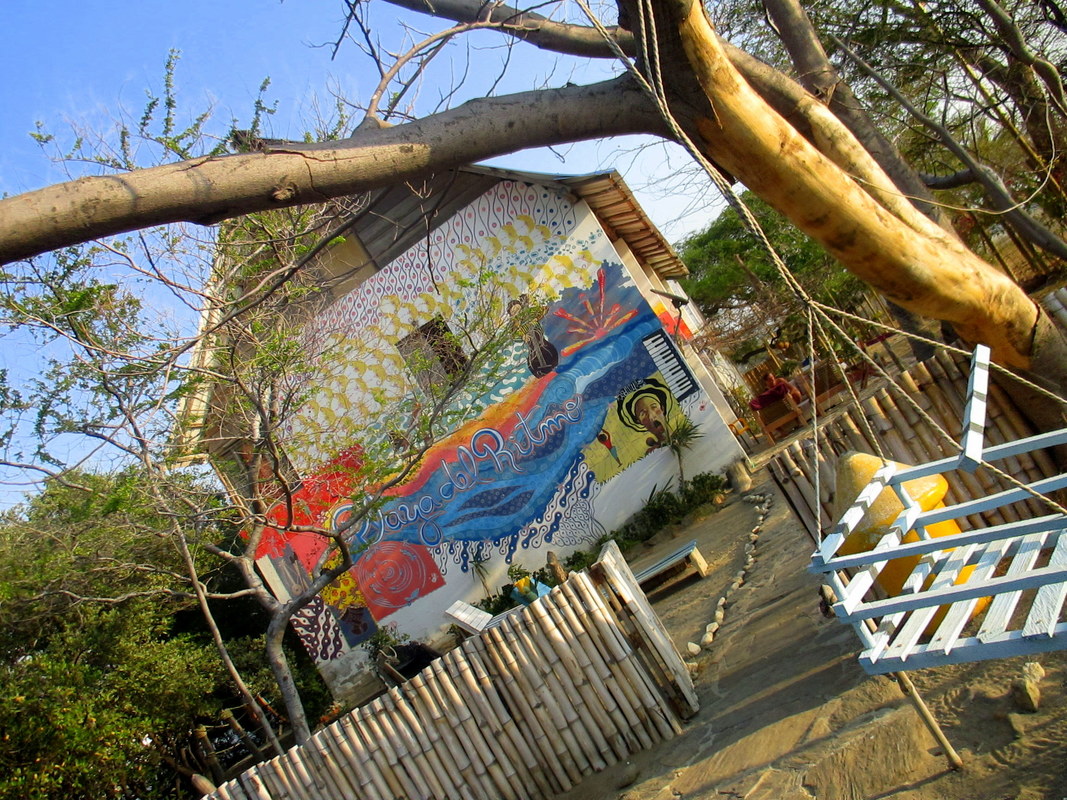 ​The first step in adopting the beach-bum lifestyle is a step back. So I took off all my clothes except of a tiny tropical bikini, ordered a piña colada and watched the pink-purple sunset from under a palm tree. Truth told, Santa Marta isn’t the most scenic beach town in Colombia nor has it the most impressive backdrop, but this place apparently has friends for grabs, cervezas being the social glue bonding a wide acreage of nationalities. And cocaine, why do backpackers snort so much cocaine? Oh right, Colombia. When the banana-bar finally closed I walked barefoot into the self-built wooden hostel and let the sound of the waves sing me to sleep. 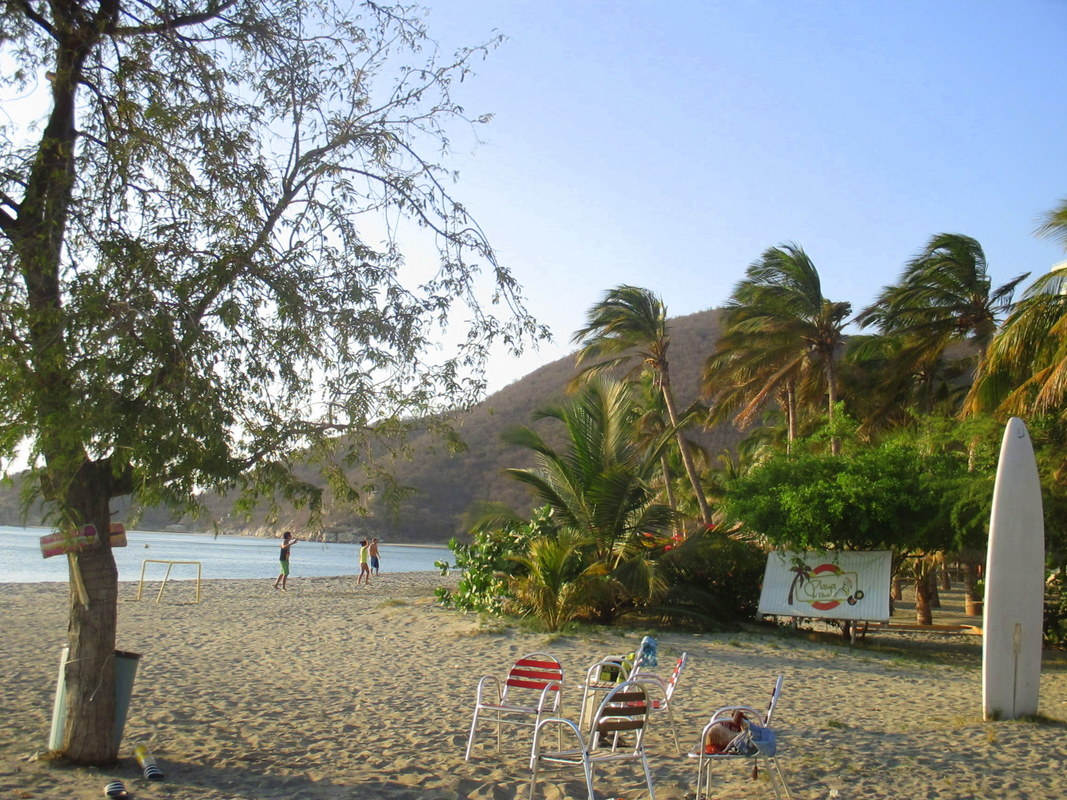 ​I woke up with salty-tasting lips in a bed full of sand, put zero make-up on and had breakfast in a hammock. While watching tanned beach boys running into the ocean I wondered how people could have depressions in a world where happiness is such an easy thing to acquire. Positioned horizontally under the Caribbean sun I witnessed my group of friends gradually expanding. That day we did... well... nothing really. I lay around a few hours until the sun filled up my entire face with freckles, watched the sunset-show again and spent the night drinking rum on the beach while everyone sang along with a long-haired blonde Swede playing guitar. That’s the life. 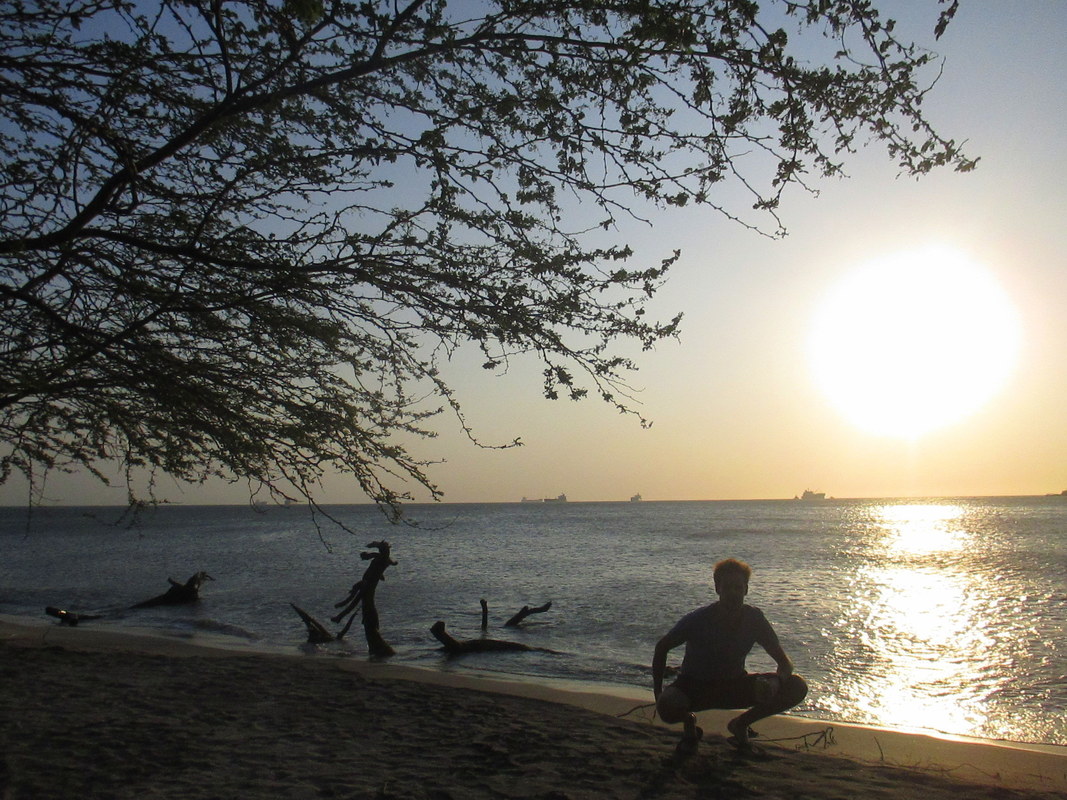 ​To have at least some kind of a plan the day that followed I took the minibus to the city centre of Santa Marta. Right, I shouldn’t have done that. This city has a dozen of things to do in its surroundings, but the town itself has not much to offer. In the devastating heat I stumbled around the centre a bit, checked out its unimpressive cathedral and melted away at the polluted harbour. I lunched with some fresh Guaynabo, guanabana, maracuya and granadilla and realized once again that the Dutch artificially grown green-house fruits have nothing to do with fruits at all. Sunny South America gives me so much more opportunity to eat healthy, as the fruits and veggies don’t taste like nauseating water balloons here (that said, it also gives me so much more opportunity to eat unhealthy, as everything else is fried to shit).
​I entered the only art museum I could find, which had a quite small and amateurish set-up. The art was sincerely weird though, which is my benchmark for awesomeness.
​Disillusioned I took the bus back to our secluded beach hide-out and let the previous night repeat itself. 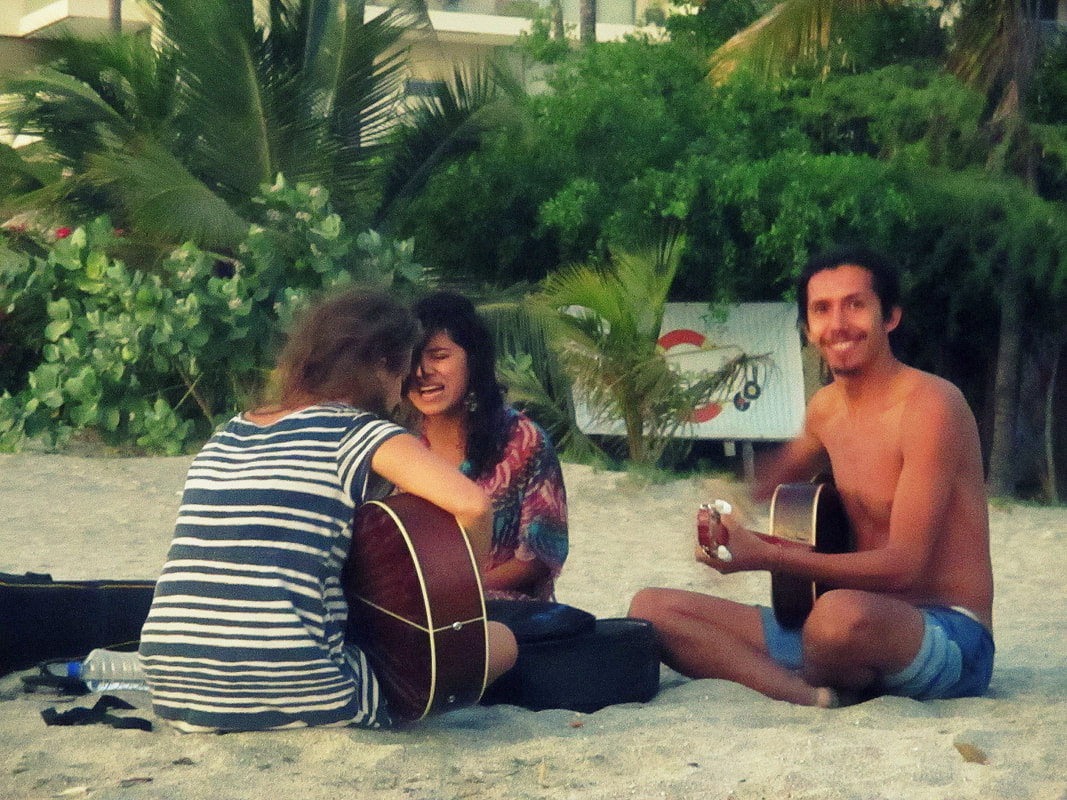 After I let another laidback and completely useless day pass by I decided my life needed some physical activity. So I tightened up my hiking shoes and travelled up to Tayrona National Park. Or so I thought. I was now part of a group though and peer pressure convinced me to head to the ‘picturesque fishing village’ of Taganga first. As soon as I got out of the taxi (also not my idea, I prefer cheap public transport or hitchhiking as my budget way of getting around) I knew I (THEY) made a mistake. I gazed at the crawling mass of people invading the tiny polluted beach while massaging each others’ sunburnt cellulite-bums with sun screen.

I made the mistake to swim in there with a snorkel mask on... I didn’t see any fish, but I swam right passed a used diaper and some floating sanitary napkins. Thanks, Taganga. 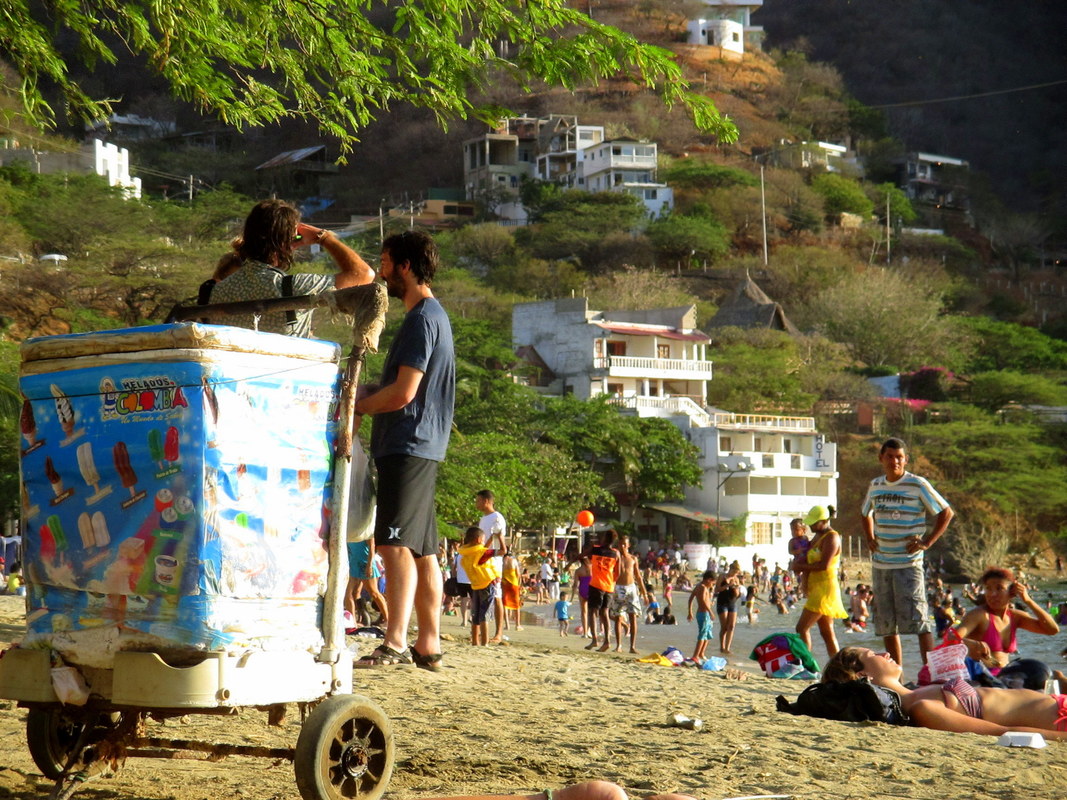 Every building was either a hostel, English-menu restaurant or a travel agency. The only locals inhabiting this place either sold pre-packaged ‘touristic experiences’ or narcotics.
​
However, soon after this observation I realized negativity is just a mental state creating a filter that can be altered easily, so I tried to focus on the bright side: My Dutch friends are locked up in offices while listening to the rain smashing against the windows, knowing they have to cycle back home soon in their plastic ponchos, while my only worry was how to run into the sea from the beach without burning my feet (and avoid the junk in the water). Completely in style we stocked up on booze and BBQ-burgers to start a night that apparently wasn’t going to end until the next morning. 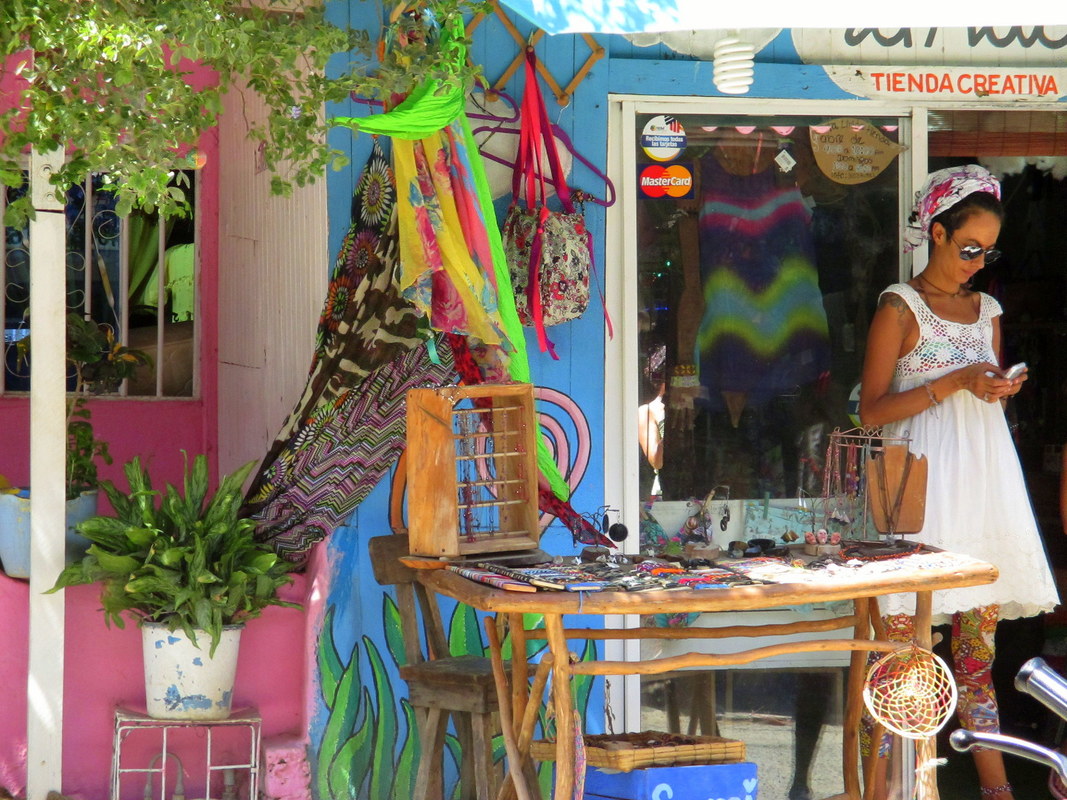 ​Nevertheless, this group experience reminded me once again why I travel the world alone. So I grabbed my independence again and took the bus to Tayrona by myself. 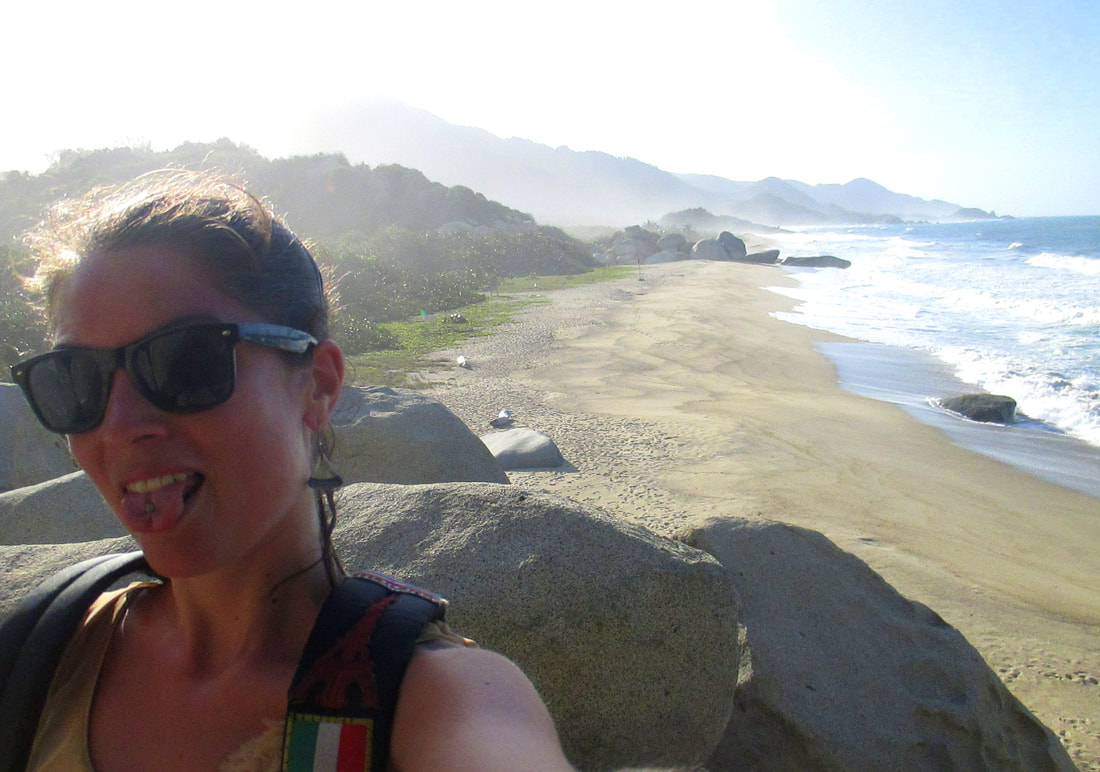 Being a cheap Dutchie I was highly upset because of the sign saying Colombians and students under 26 pay a COP7500 entrance fee, while foreigners have to cough up COP38000. I don’t get that, we don’t let our valued visitors pay more for the Anne Frank house or Van Gogh Museum. I decided that if they like to rip me off like that, I can at least return that favour. I am neither a student nor under 26 years old, but I flashed out my 5 year old dateless Italian student card and made so many folding lines on the copy of my passport that the 7 of 1987 could easily be a 5. I couldn’t fool the ticket-bitch though, they’re quite strict when it comes to overcharging tourists.

My body didn’t seem to notice that it skipped a complete night and for some reason I almost found myself running through that national park while the 38 degrees squeezed every drop of liquid out of me. I passed humid forests, gorgeous beaches, jaw-dropping cliffs and spotted monkeys in the trees before I reached Cabo de San Juan.

I threw my backpack down, took off my clothes drenched in sweat and ran into the ocean naked. While floating on the waves I watched the sunset and realized the beauty of the Tayrona beaches can only be levelled by Australia: absolutely world class. I only came out of the water when the sky turned pitch black and put on some mindfulness-music to meditate under the stars. What a place. 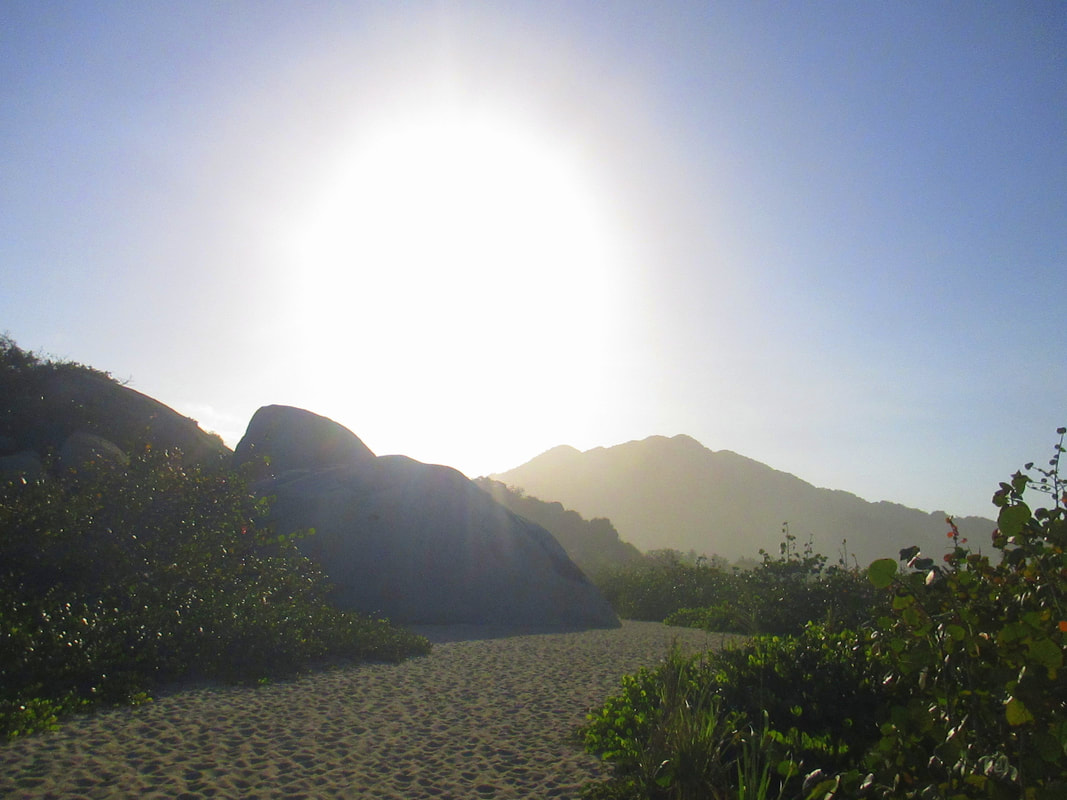 ​The only option was to rent a tent in which I had to sleep on the floor. Regardless of that, it took me about 7 seconds to pass out before 8PM. I slept 11 hours until the sun boiled me out of my tent again. Still wearing my bikini I marched straight into the sea again and noticed the intimidating amount of fit sun-kissed bodies. This place was a melting pot of highly attractive and (oddly enough) mostly Dutch-speaking foreigners. This motivated me to tone my legs with even more hiking, so I lined up to use the only sink for the 200 campers to freshen up for the climb to the ‘pueblito’. 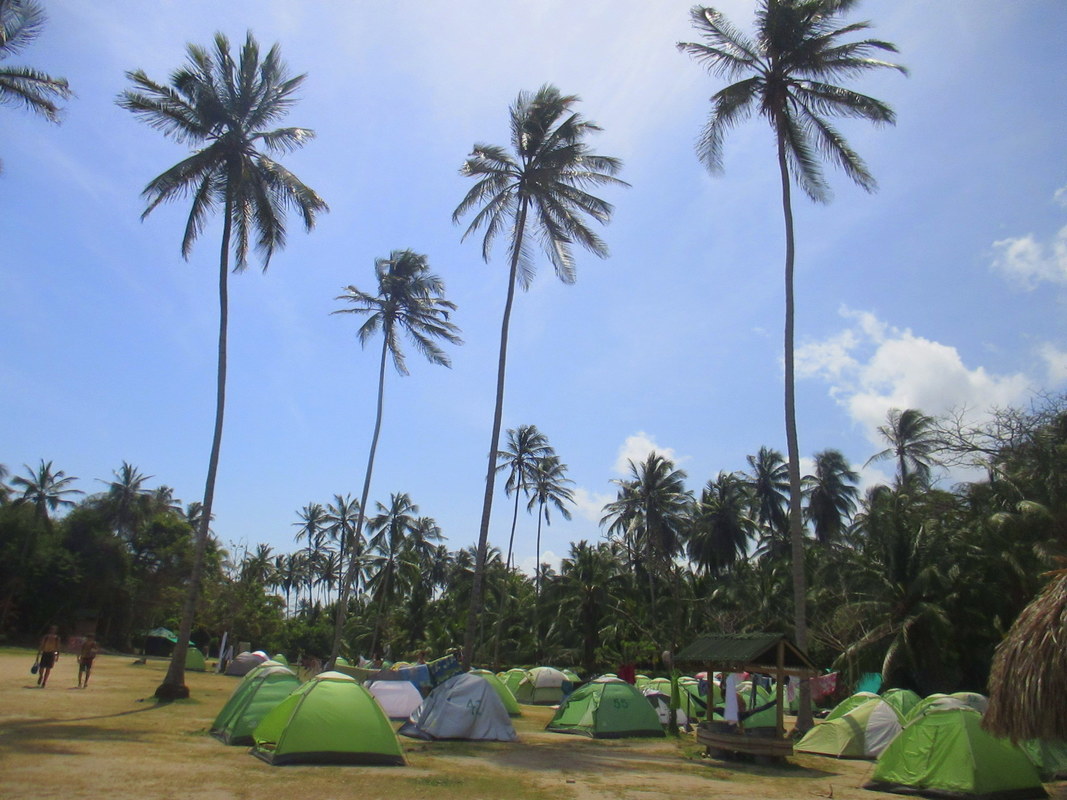 ​I actually rather wanted to explore the southern part of the park, but I learned that in that case I had to walk back to the park entrance, take another bus, PAY AGAIN and then enter the park from another entrance. Ehmm, do you take payments by credit card, cash or my middle finger? I find it quite ridiculous that we have to pay for nature in the first place. The planet is ours, nature belongs to all of us and is a public ‘good’. The fact that we apparently need to turn it into some Disney-style protected park and put gates around it to make sure no one will destroy or exploit it for their own profit only shows how fucked up our world became. We think we are getting more and more advanced, but I think we can learn a lot by going back in time (before the introduction of the monetary system) and see how our ancestors only took from our precious nature what they needed to stay alive, instead of taking as much as they can in order to become rich and therefore powerful. But... I’m drifting off, sorry about that. 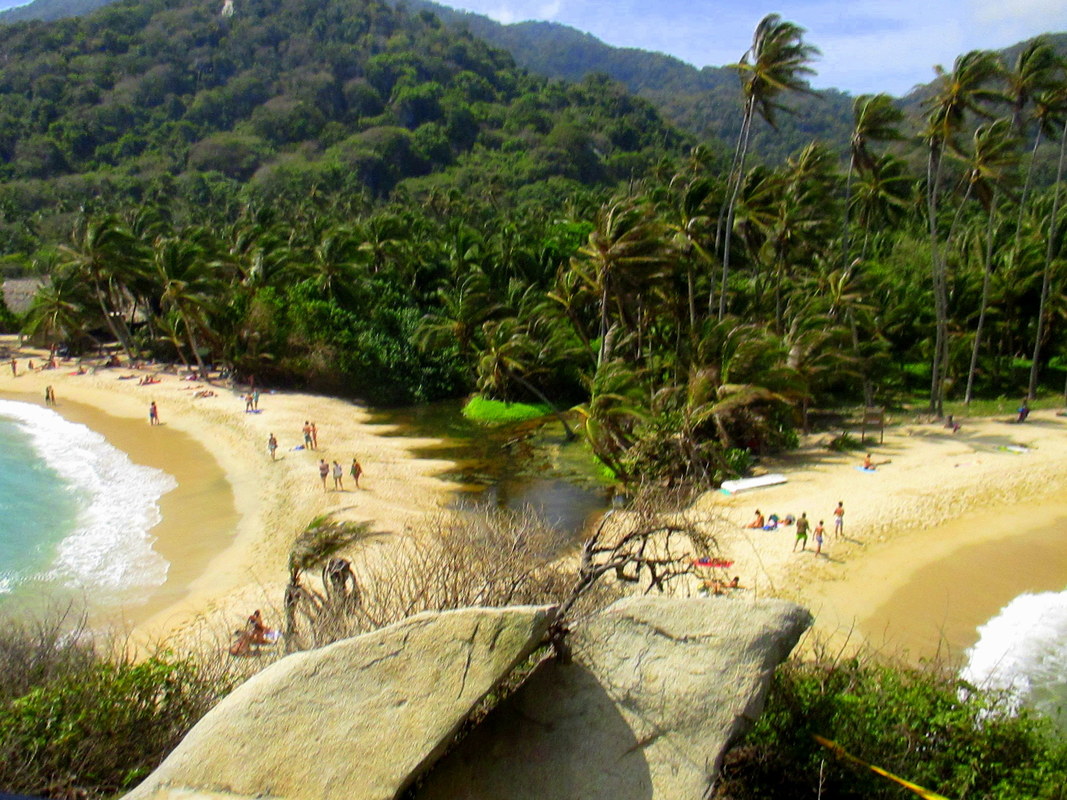 The hike to the pueblito seemed to be a steep climb. I would have dealt with that unpleasant surprise if the temperature would be either 20 degrees less or shade would be existent, but neither of these scenarios could be applied. I come from a cold country and intense heat is something that drains all energy out of me. Add up the fact that I drank drinking water that wasn’t drinking water after all, and my belly felt like there were 6 balloons in there that needed to be farted out... So when I was half-way after an hour of agony I asked myself how much fun I was really having. None.
​
I turned around and walked back to the park exit via an alternative route straight over the breathtaking beaches Tayrona is famous for.
I ended up walking 7 hours in total, after which I took the 1,5 hour bumpy non-airco bus back, got stuck in traffic for another hour in a van to my hostel and walked the last part with my painful salt-scrubbed butt cheeks rubbing against each other.

The crappy cold shower I took afterwards was the most refreshing one I ever experienced, the not really cold diet coke the best one I ever drank and the hard mattress the most comfortable I ever slept on. My feet were bleeding, my belly was tortured by an intense red sunburn and the UV put blisters on my mouth... but I would have taken twice the pain to experience the splendour of Tayrona National Park. 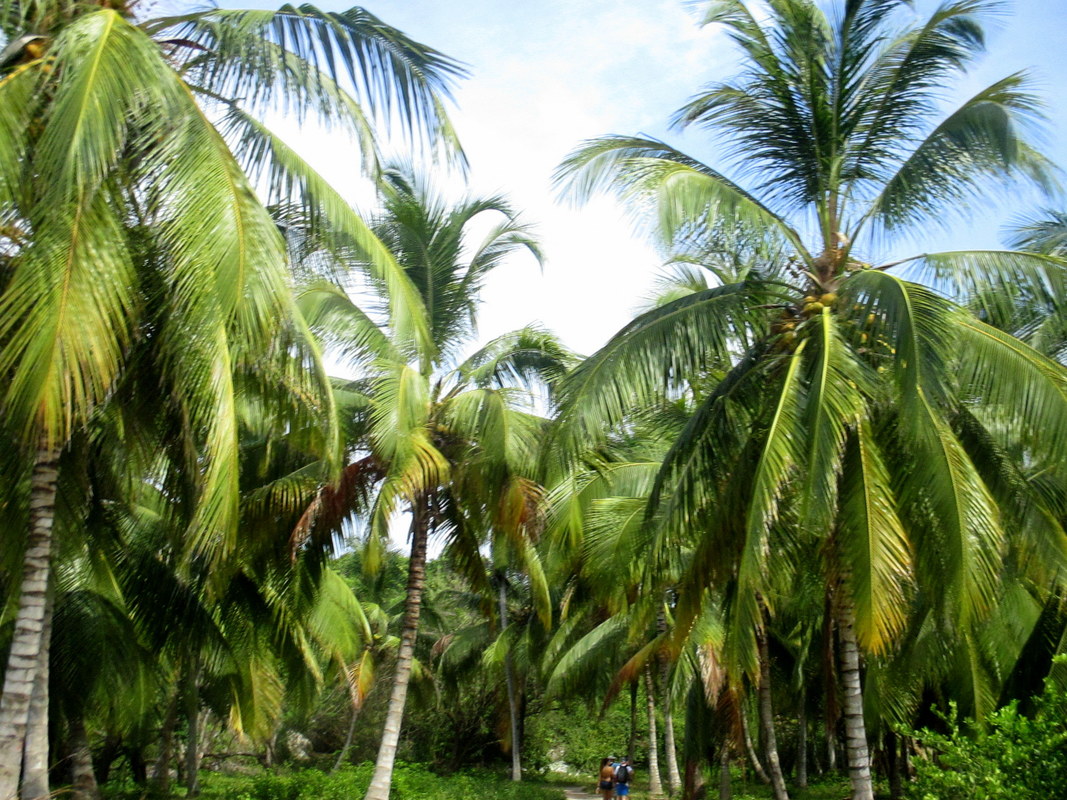