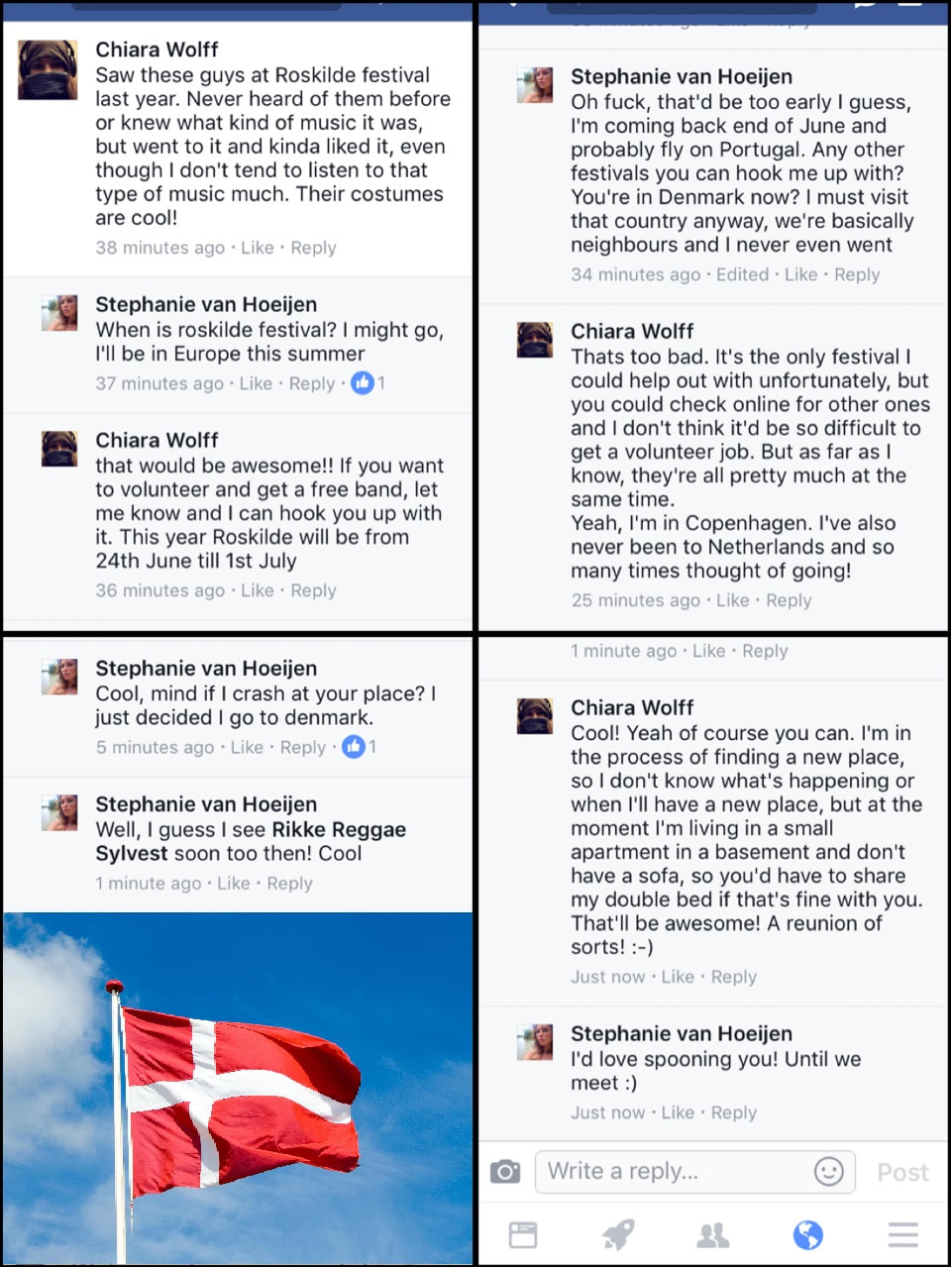 That’s how it went.

My friend suggested in a reply on a Facebook-post I should go visit her in Denmark. So I did.

I would be in Europe at that time anyway, so what was stopping me? Five minutes after this post I had booked a flight. And also one to Scotland and Lithuania, but that’s another story. I’m afraid I’m a serious case of travel addiction. Incurable infection of the travel bug. 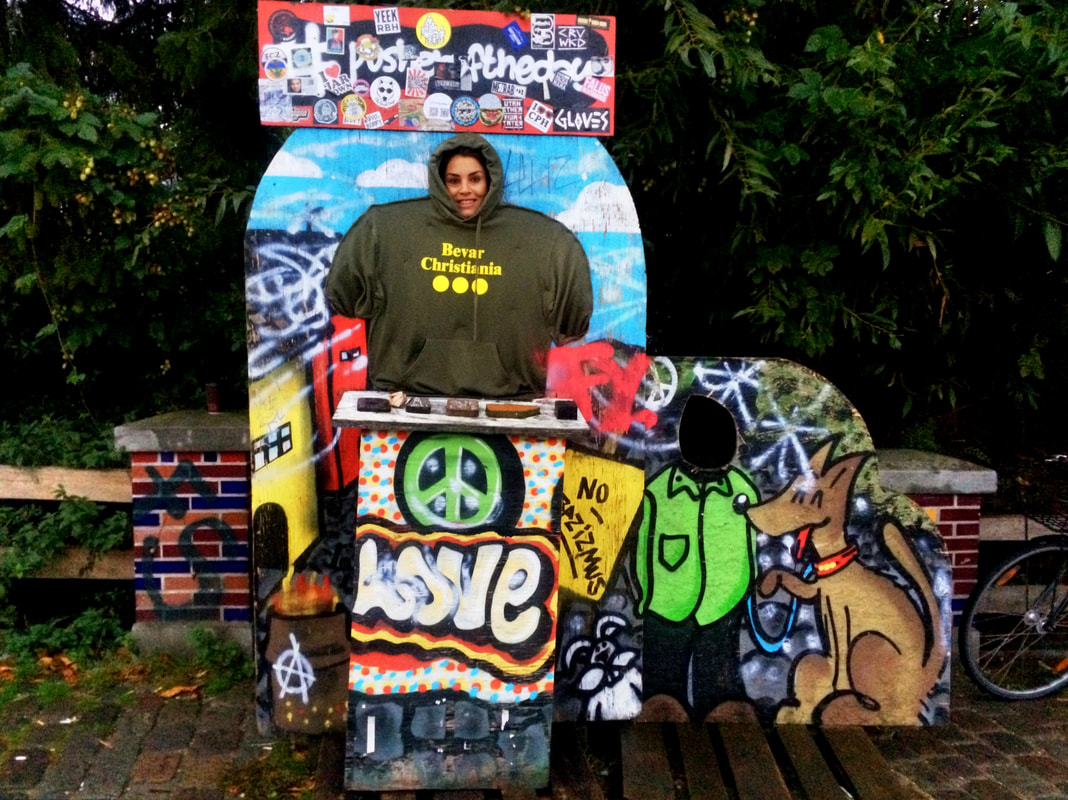 It might be because I was flying from Scotland and people in this section of earth are known for many things, but not necessarily their irresistible looks (although my personal experience forces me to remind you of some exceptions!)… but man, that was one good-looking airplane-filling. I know the Swedes are globally praised for their hotness, but don’t forget about the Danes! Even the construction worker fixing a lamp at the airport had his hair done like he was about to walk some Armani show, rocking those fluorescent workpants with swagger.

On my way to my friend’s house I noticed I was all the time stimulated with this sharp sense of recognition. It felt like everywhere I went people were speaking my native Dutch around me, but once I pointed my ears to listen more carefully I had to conclude I didn’t understand one single word they were saying. 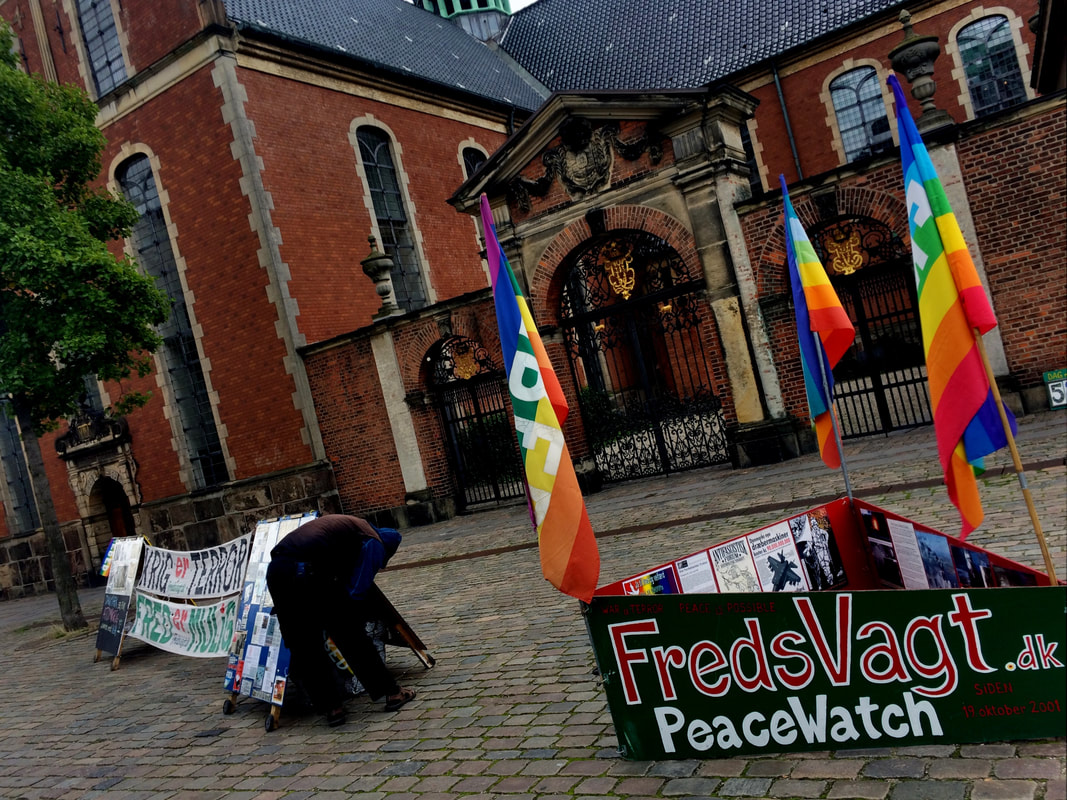 ​I observed a similar thing with regards to the city sights flashing by my eyes. It looked so much like The Netherlands, but at the same time it was so different. Everything looked so thought out and organized into the minor insignificant details, and man, so Scandinavian! Which is not surprising, as Denmark IS Scandinavia. Sherlock.

What else? Well, I immediately noticed that people speak flawless English, they never smile (muscles must be frozen by the cold), but at the same time they’re remarkably kind and polite. Oh, and everything is expensive. So goddamn expensive! I must conclude this is so far the most expensive country of all the 50 I visited, and now I’m including Sweden and Australia. In fact, I quickly learned that the Danes have a habit to live in Malmö just across the border and take a daily train to Copenhagen to work, so they can profit from cheaper rent and lower cost of living. And Sweden has always been my #1 expensive country… up until now. 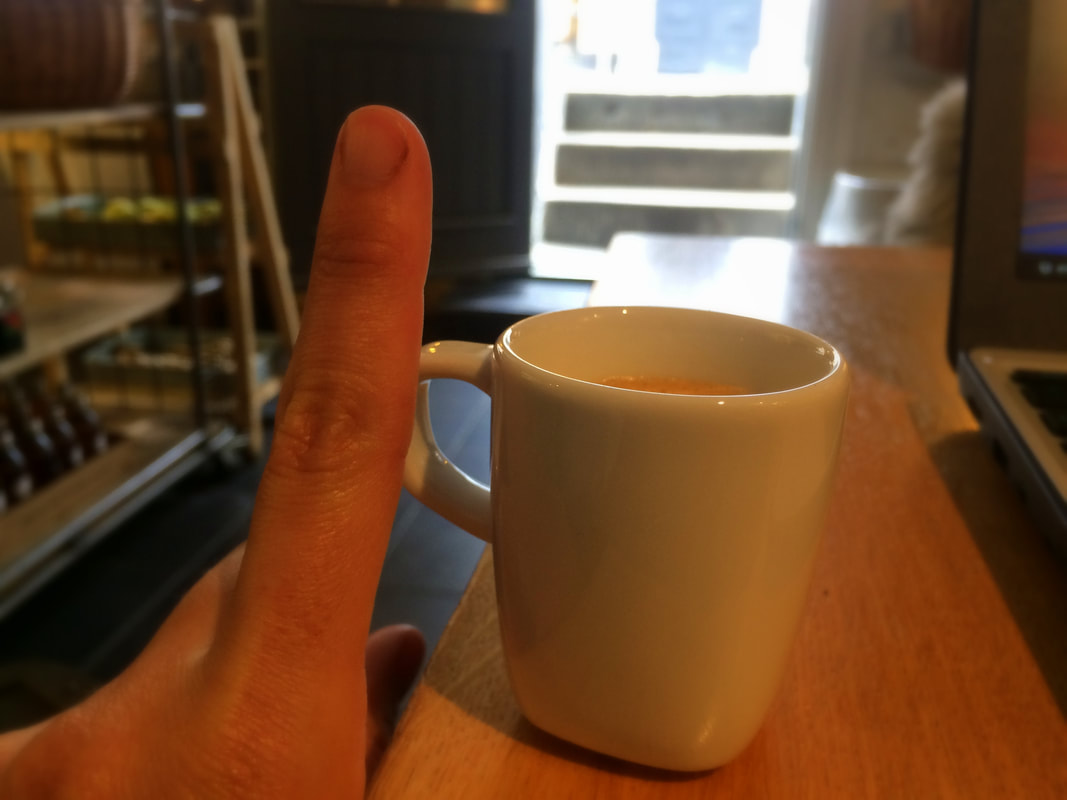 See this cup of coffee of half a finger long? 5 euro’s, please.

​
I took the metro*, which cost half the price of my Ryanair-flight from Edinburgh to Copenhagen, and shortly after hugged one of the two friends I came to meet here: Rikke.

[*Not an unimportant side note: The metros here are operated purely automatic, there’s no one driving it… this allows the front to be made entirely out of glass, which made the whole trip feel like some rollercoaster ride. Or like that one Marilyn Manson music video. Jeeeej!]

We met about six years ago in an Australian house of a nudist Couchsurfer called Peter Pan (another story for another time) and kept in touch. Logically, as we have lots in common. The two main coherences: We’re both travelers and we both love animals. Although: Me, the homeless nomad; she, the home based gypsy with a house full of flags and maps: 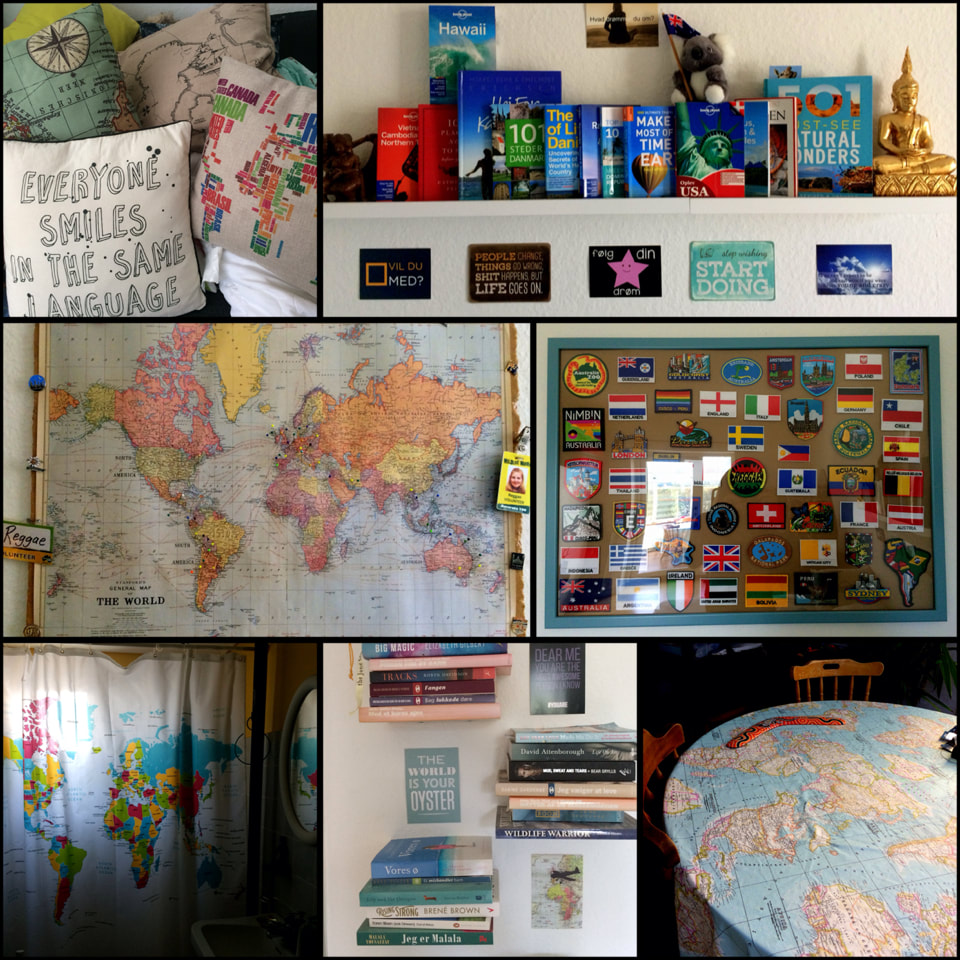 Me, not killing anything with a heartbeat but saving the hugs for everything soft and fluffy (like her two hyperactive chihuahuas); she, obsessed with snakes and reptiles. In fact, my couch was right next to a wall of aquariums, a total of six snakes sliding passed my face when I was in dreamland. 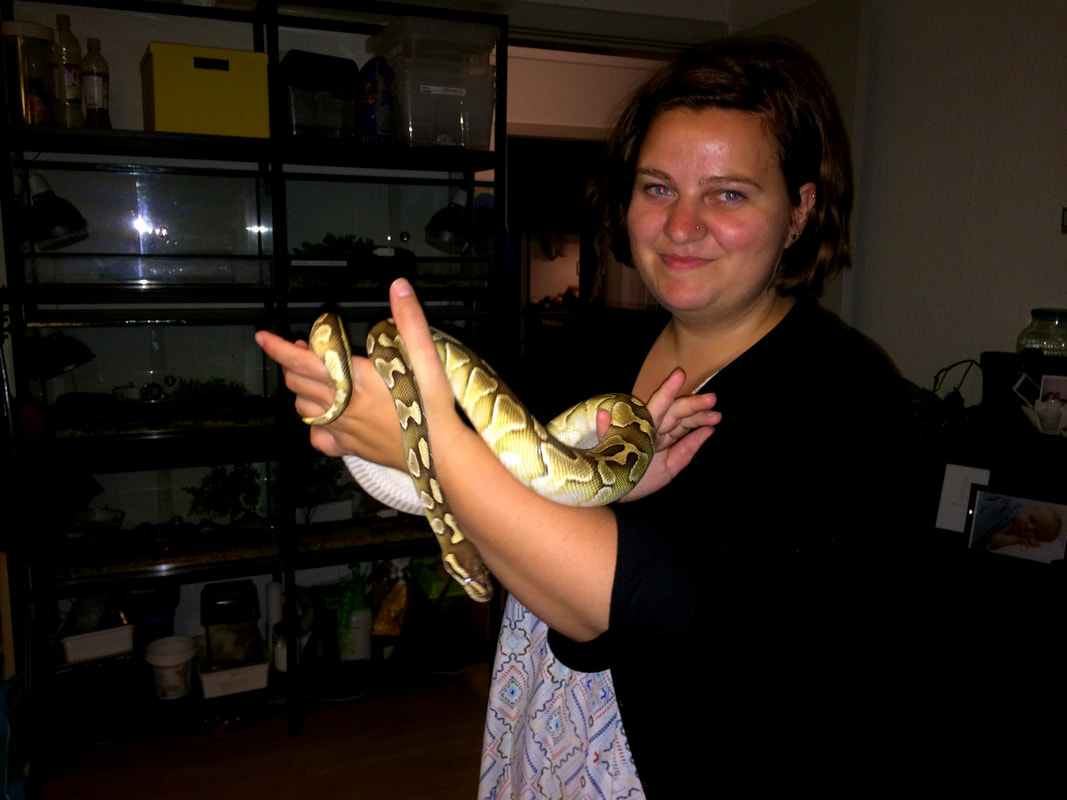 Ahw, what a cutie pie!

​
​Luckily, she keeps the snakes at home, only Hope The Chihuahua travels along in her specially designed dog-backpack. 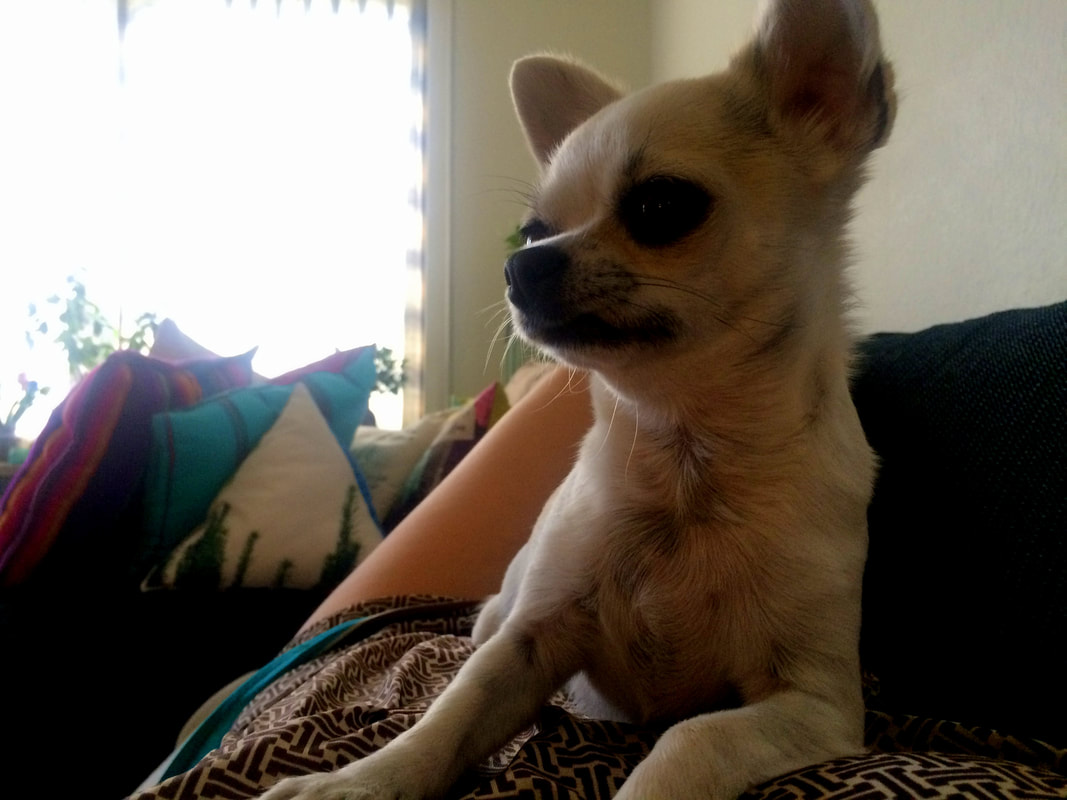 On our private tour around her city I was at least as excited as this little barking creature. New cities to discover, that’s one of my favorite hobbies! From the central station we crossed the road to Tivoli, an ancient amusement park in the middle of the city. 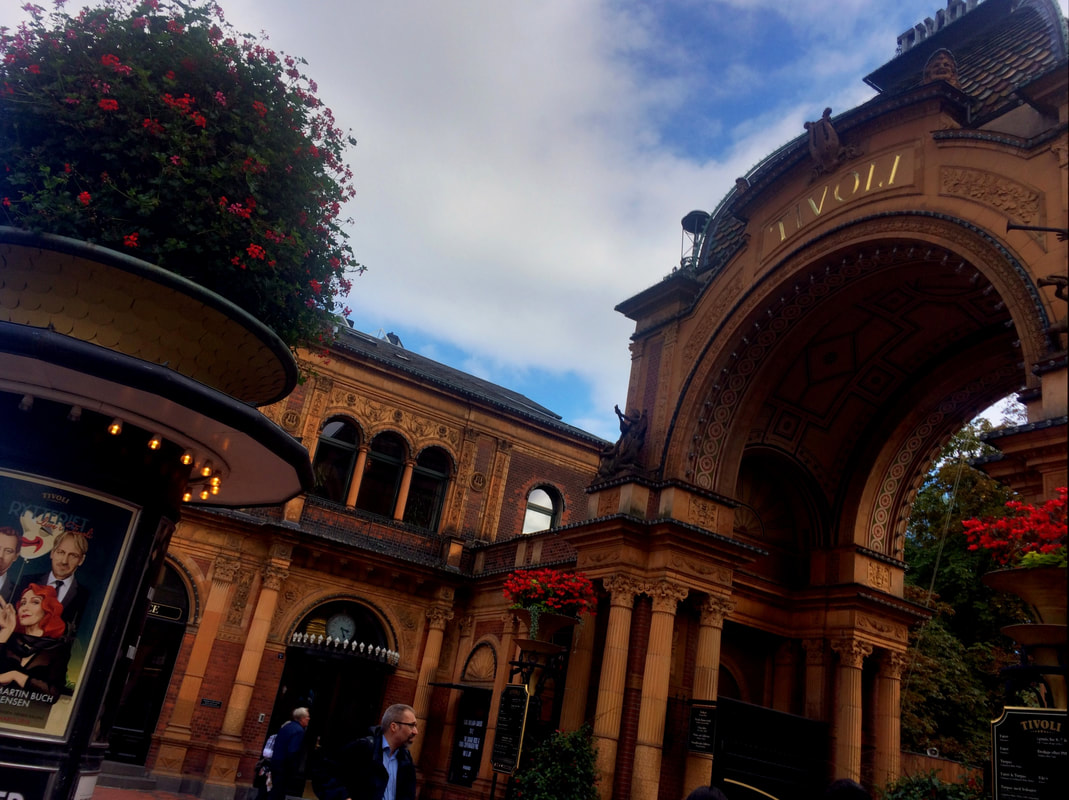 From there we continued to the standard postcard-spot of Copenhagen: the colorful Nyhavn, meaning ‘new harbor’, even though the newest harbor is Christianshavn. Minor detail. 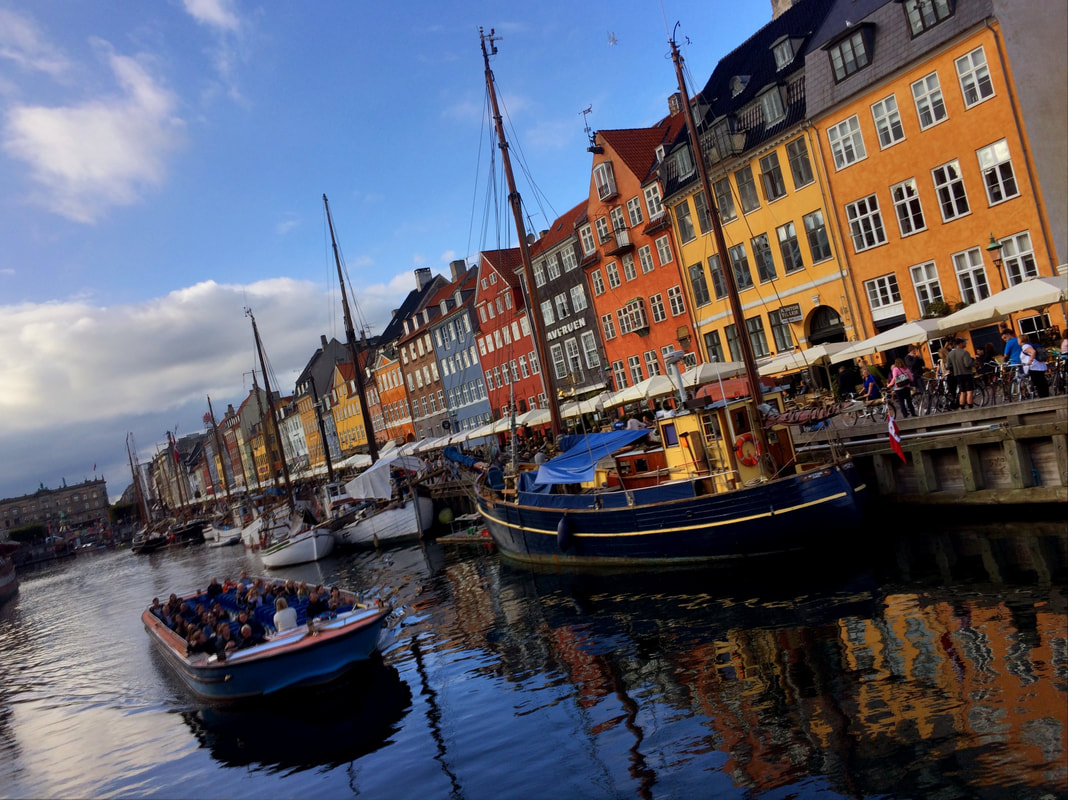 While we walked the shopping streets passed the Rundetaarn I noticed one other thing that certainly resembles my home country: Bikes, lots of them! If Holland comes first, well, then Denmark must come for sure second considering the strength of the bicycle culture. One major difference though, which I noticed when exploring the entire area on my friend's bicycle:

Danes are so well-behaved!

It’s impossible to tempt them to commit any traffic violation. I basically came out of the uterus on a little bicycle and when I’m on one I can flawlessly blend into a suicide squad. I race, zigzag between cars, roll down pedestrian lanes and honestly, I can’t remember the last time I stopped for a traffic light. I mean, I have eyes in my skull right, why should I need to wait for the color green to know if I can go or not? I think it’s the Dutch approach. The Danes are the politest people I’ve ever seen. 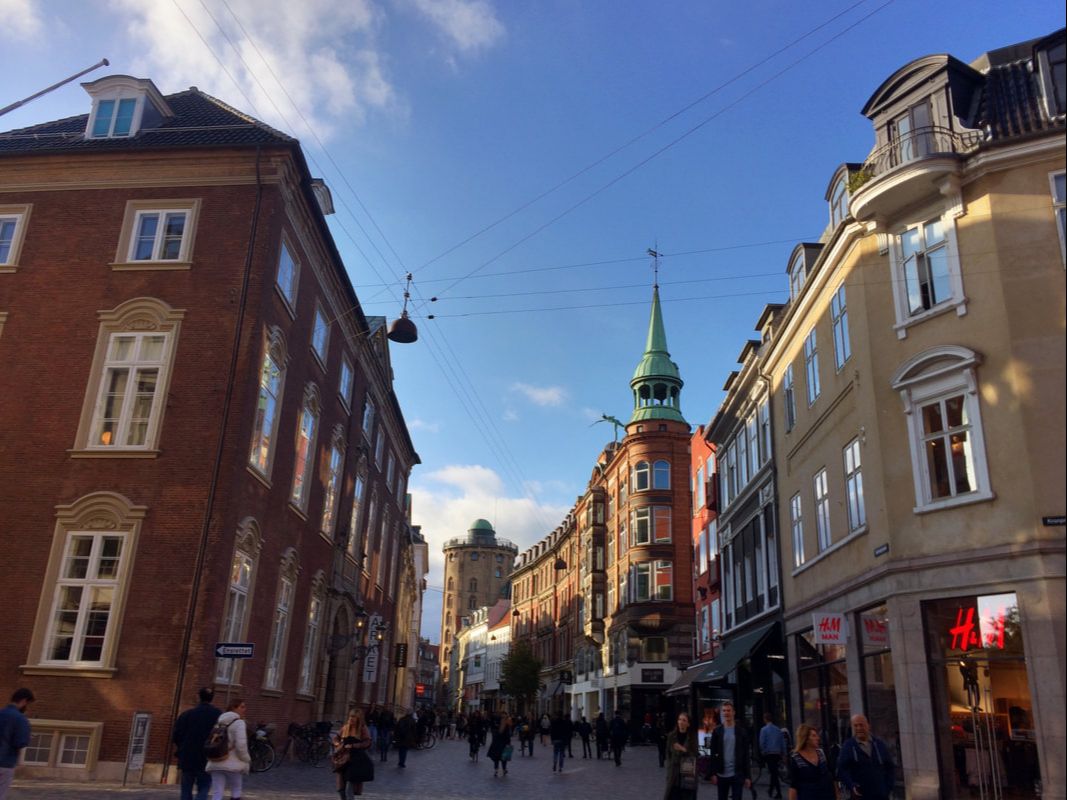 Also historically, nothing shocking ever happened here. The most exciting stories must come from the guy that married the queen, a Frenchie, causing national outrage with his rebellious attitude. Therefore, the Free (=tip-based, nothing is free in Denmark) Historical Walking Tour was hardly uplifting. If nothing happens, what’s there to tell?
You can walk passed the Operaen opera house, the castle of Amalienborg and Rosenberg Slot, the Cathedral, Royal Palace and, of course, the Little Mermaid statue (Hans Christian Andersen is a Dane)… which was overwhelmingly tiny and disappointing. 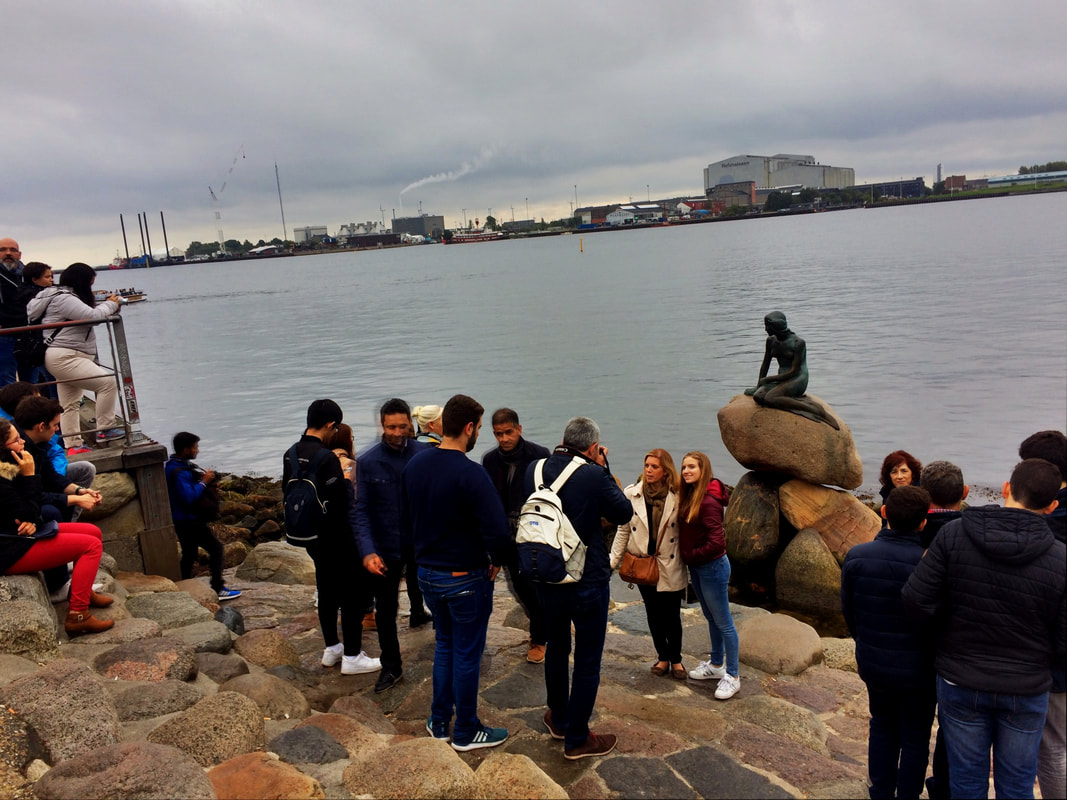 I tried to visit the museums the next day, as I carefully planned out my cultural scheme around the freebie-days because I cannot afford Danish entrance prices. But guess what, they discarded those too. Screw the poor, let them be ignorant and culturally starved! One bright museum employee suggested I buy a Copenhagen Card to visit a few museums in a 24-hour-timeframe… you know what they ask for that? 389 kronor, or 53 euros...

Well, dear Copenhagen, you can stick that ‘promotion’ where the sun don’t shine. I rather go for REAL culture, created by the people. And the ultimate place where you can find this in all its uniqueness is Christiania, where my other friend Chiara guided me through. 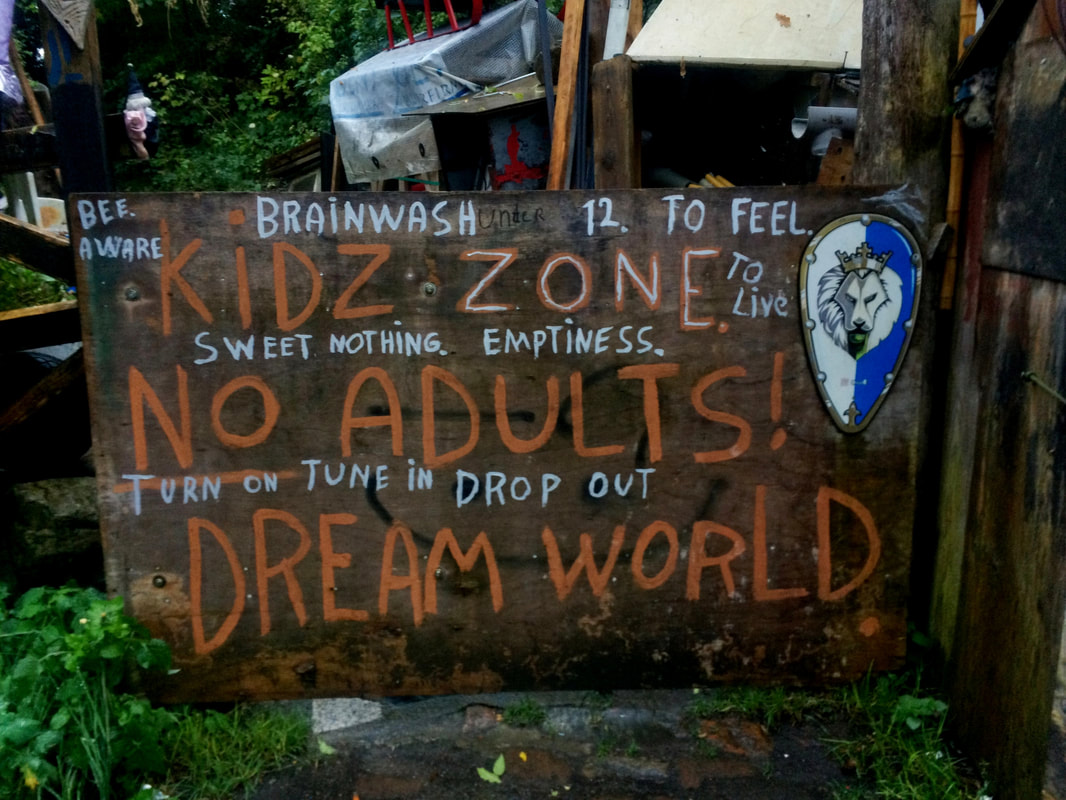 It’s very appropriate, as this place suits her so well. Chiara, who is Rikke but louder and more careless. This friendship, also originated at the same location in Australia, was mainly initiated because we’re both equally reckless. Chiara is a dude in a female body, and I think this is the biggest compliment I could ever give to a woman, as it’s my own biggest virtue. She laughs without restraint, she burps whenever her body gives the sign and if she has something to say (which is basically 24/7), she says it as it is, directly in your face without beautification. She’s full of tattoos, probably all set whenever the impulse came up to do so, a ring dangles off her nose and she thinks dumpster-diving is a great idea.

If we were both gay I think we would make a great couple, we would laugh a lot for sure. 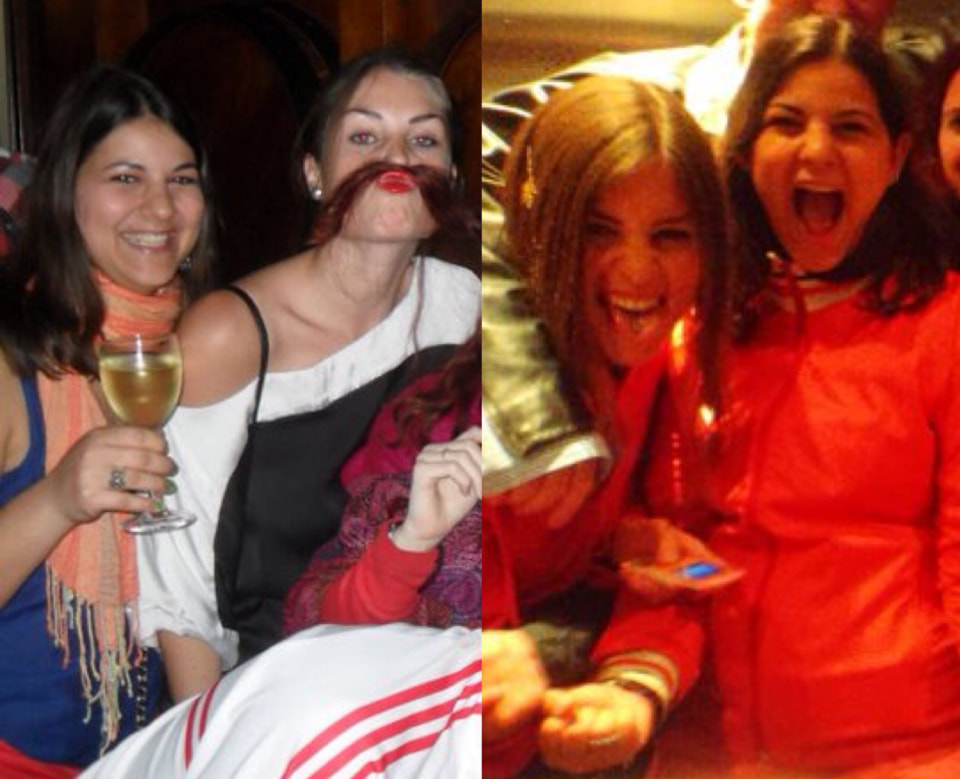 Right, I was talking about Christiana, wasn’t I? So this place is officially a separate state within Copenhagen. An independent, marihuana-infiltrated, peace-bro-woodstock-baby hippie state, to be more precise. Luckily there ARE Danes that do not follow the rules. 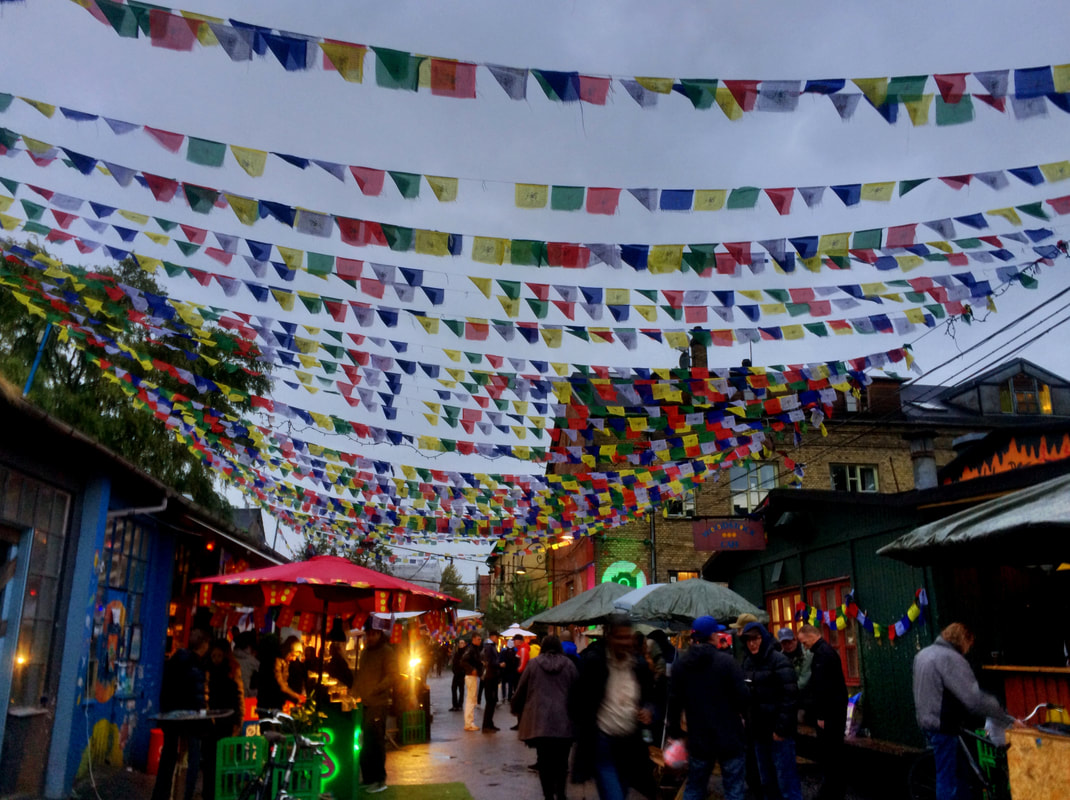 This is the weed market
​

They don’t follow the rules in such a degree that they separated themselves from the country - man, even from the EU a handwritten sign in pink glitter-paint informed me - and created their own law. A law that can be basically summed up as ‘make love, not war’, put in too many words which were probably written high anyway. There are no street lights, so if you want to see the scraps-built houses painted in all colors of LSD, come during the day. And wash your hair afterwards, as that anti-smoke-law in bars for sure doesn’t fly here.
So what else? I saw Copenhagen, I saw an independent state right into it… aha! I need to see the city’s surroundings! With a bit of nature, please. Blend it all together and you get Jægersborg, a regional park 15km above the capital where deer live freely.

I went per bike, of course, my whole childhood I cycled the same distance up and down to highschool, through all four seasons (the only reason for my parents to bring me to school by car was when the snow was knee high and blocking my wheels, or if it rained and froze right after so the roads had turned into ice… although I remember I had to fall with bike and all FIRST before they were convinced to give me a lift… yeah, drilled to be a bike warrior). On this rare sunny day I passed the little villages circling around the capital, listening to names like Lyngby, Ordrup and Taarbæk, leading to my natural treasure. 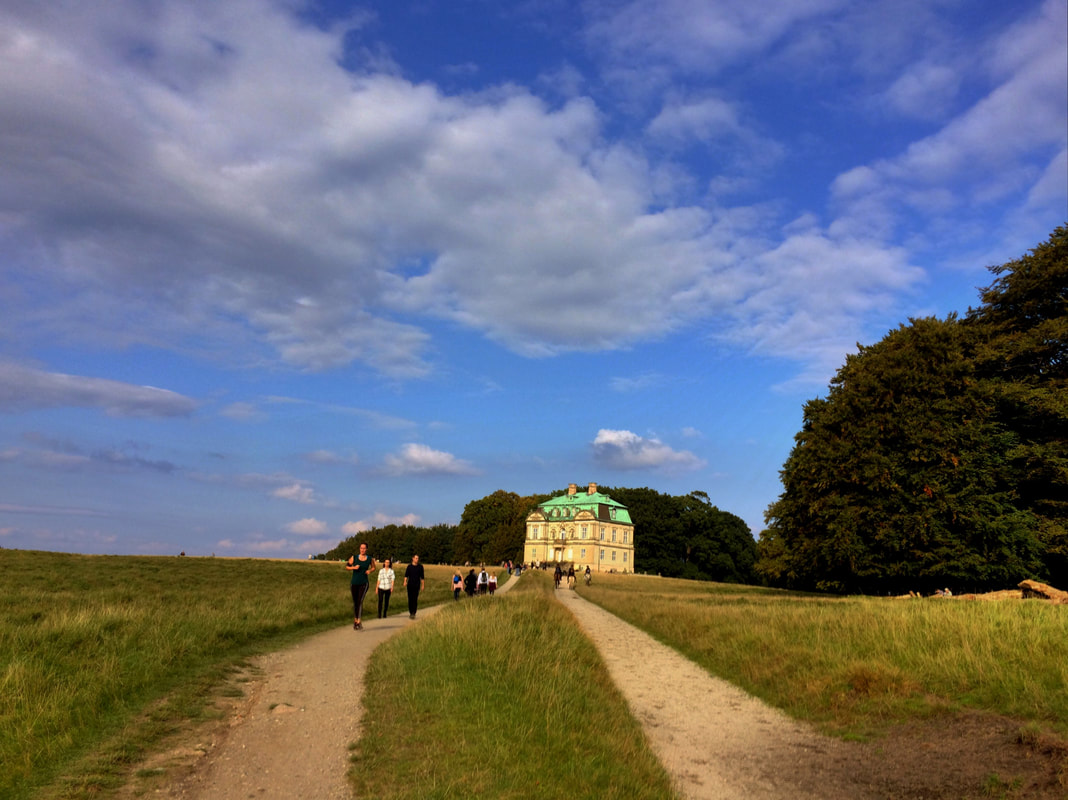 ​Which was, it must be said, no, it must be shouted off the rooftops, amaaaaaazing! Finally some grass after 3 days of bricks! And the deer? Love ‘em all. I spent an hour lying on my belly in between the hay observing them, until they probably thought I must be some absurd-looking plant and dared to come shockingly close. The leader throwing his head in his neck and uttering deep chest sounds to keep his herd together, it’s a magical sight. 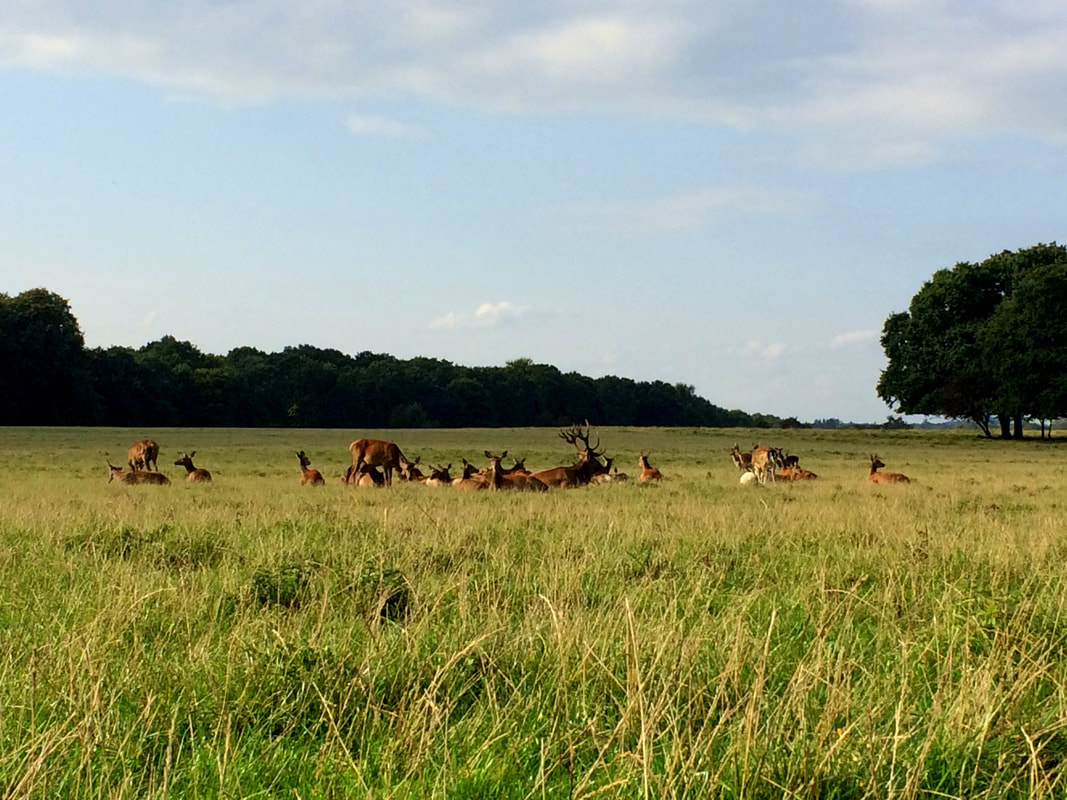 Animals, they’re cool. Copenhagen, passes the test as well, as long as it’s played by the rules. 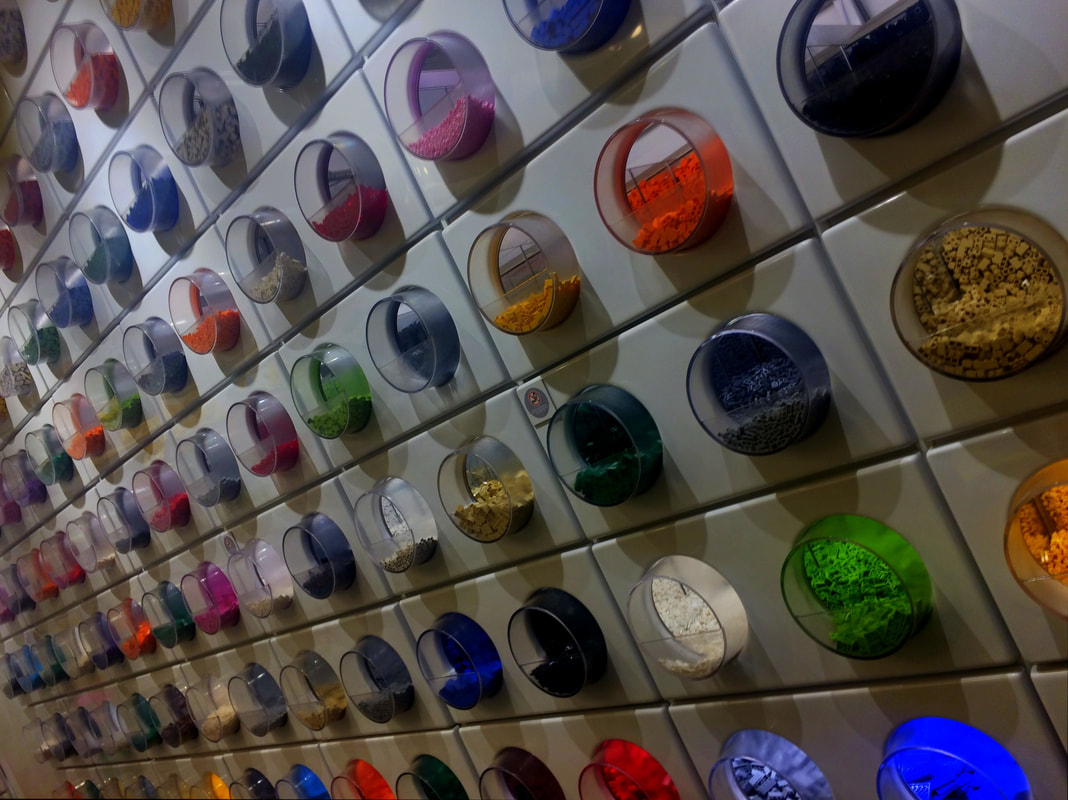 No this isn’t candy. It’s Lego. Denmark happens.
In order to support the travelers’ community, I spend many hours per week to adequately document all information and advices for prospective visitors, accompanied by a (hopefully) entertaining insight into my personal observations and experiences. This service is and will remain free. However, if you voluntarily want to make a contribution and support my travels and thus the creation of new stories and information supply, here is the button you’re looking for:
Donate
Related:
- A natural getaway in Denmark: Mols Bjerge National Park
- The town of Hans Christian Andersen: Odense, Denmark
- An independent hippie-state in the center of Vilnius [Lithuania]: Uzupis
​- 8 ways to save money in Vienna, Austria
- The slow charm attack of Serbia’s capital Belgrade​
​- Europe's best skiing & hiking: Get your ass over to jaw-dropping Switzerland!
​- Discover more Belgium: Antwerp & the most kick-ass Flanders itinerary!
​- Romania's Winter Wonder Land: Skiing in Sinaia & the Sibiu Region (and sleep in an igloo!)
- The hippie settlement of San Marcos around the Atitlan Lake, Guatemala
- A journey through the mind with ayahuasca [Peru]
​- Wannabe a hippie? Head to Tulum, Mexico
​- Vegan food and tarot-readings in Minca, Colombia
​- Uruguay's hippie beach spots: Cabo Polonio & Barra de Valizas
- Hotspot of the Argentinean (wannabe) bohemians: Purmamarca & Tilcara
​- Where modern meets classic: Vilnius, Lithuania
- Medieval Holland kept alive: Den Bosch & Haarlem
​- 10 typical Dutch celebrations no traveller should miss out on
- A capital surrounded by scenic little villages: Lisbon, Portugal
- Where city and nature meet: Edinburgh, Scotland
- Spanish citytrips: Barcelona, Malaga & Sevilla
- The modern delights of Frankfurt am Main, Germany
​- Wind and hipsters: Wellington, New Zealand
- Getting comfy in the Korean big smokes: Busan and Seoul
​- Discover Romania's enjoyable cities: Bucharest, Brasov and Cluj Napoca
- The 3 golden rules to travel Sofia on a budget! & Why you shouldn’t miss out on Plovdiv! [Bulgaria]
​- Budget Bucket List hitchhike trip to... Kosovo!
​​- Guest Blog 'Kosovo Girl Travels': Travel tips and stories from Kosovo's first and only travelblogger!
​- 3 reasons why you need to visit Nijmegen [The Netherlands]
​​- Top-5 places to visit in South Limburg [The Netherlands]
​​- Discover the splendours of Turkey: Istanbul on a Budget & Reasons to visit Edirne
​- Malaysia's street art hotspots: Penang & Ipoh!