Download File
"What are you doing here? Get back into the bus. There's nothing to do here."
​
A worse introduction to a city isn't imaginable. But this is what some expats told me once I set foot in Belmopan. I looked around me: a parking lot aligned with grey government buildings. I assumed this was some suburb, so I asked how to get to the vibrant centre. "This is the centre", the security guy said. I laughed and searched his face for a cue that he might be joking. He wasn't. Then it started raining. 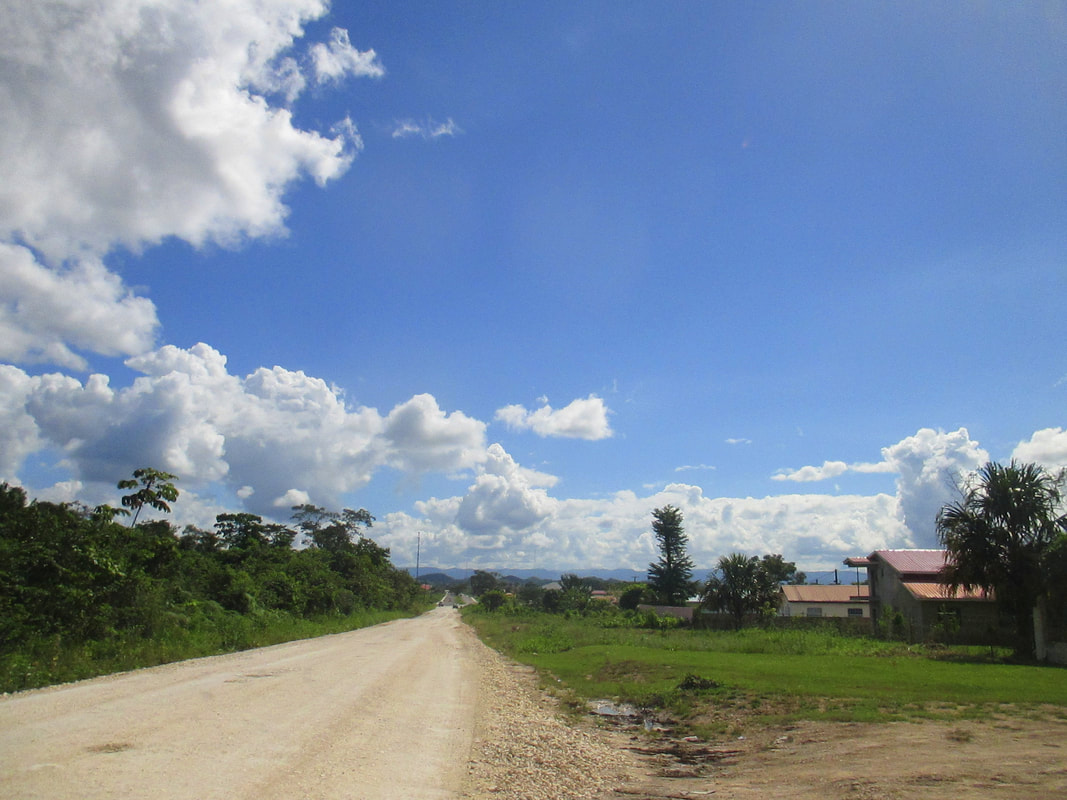 ​The good thing is that from that point on it could only get better. And it did! Couchsurfer Andrew tapped me on the shoulder and welcomed me to his town. Given his Latin last name (Rodriguez) I assumed he was a local, but he was in fact an originally Puerto Rican North-American citizen working for the US army. After four years in Guyana, his employer recently sent him down here, providing all his life necessities. And you know how Americans always want things big, bigger, biggest? Right. This guy lived in a giant four-bedroom villa with three bathrooms, massive living room and kitchen (I counted three bread toasters) and a flat-screen TV bigger than myself. Alone. 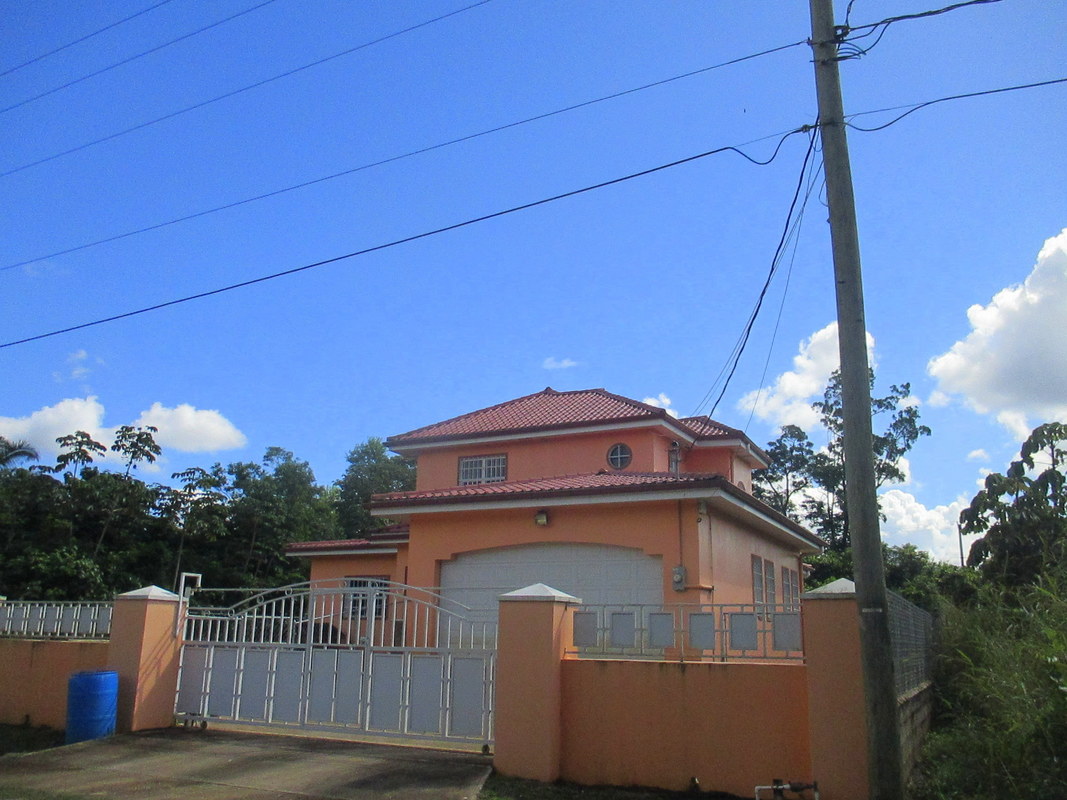 As a house like that feels pretty empty with just one person in there, he dived into Couchsurfing to have some voices filling up the void. I was one of the lucky bastards that found this guy. After he made me lunch we watched a marathon of series and documentaries on Netflix, followed by a splendid dinner. He assured me 'his food is my food' and led me to my bedroom with private bathroom (WITH hot water). So yes, certainly not complaining. 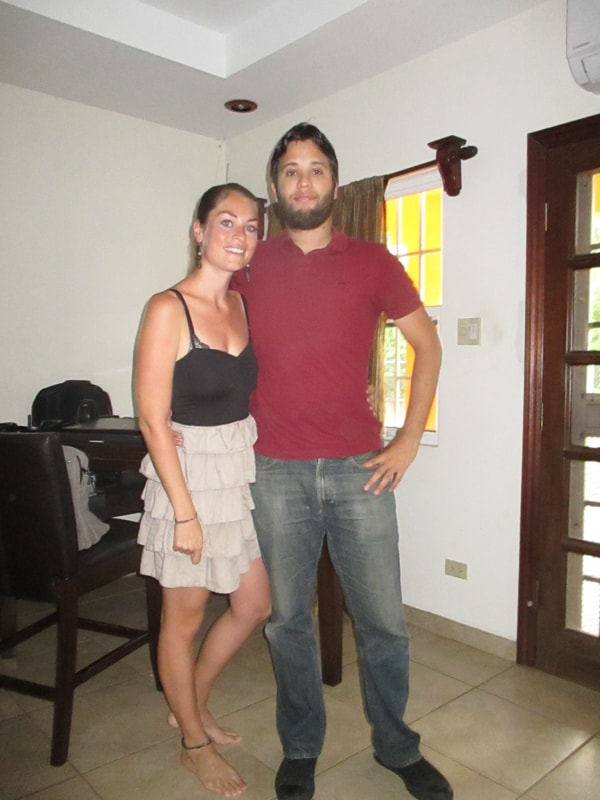 After an intense coma-sleep-night-rest I finally caught up with my website and internet-related work now I finally had the fastest internet of Central America and some supersonic laptop at my disposal.  After weeks of hand-washing I did my laundry the Western way (in a machine) and walked down to Guanacaste National Park, passing 'downtown' Belmopan. To be honest, it looked more like some tiny yuppie suburb than a country's capital. It felt like I walked down Wisteria Lane (Desperate Housewives duhh…). Some expat safe haven materializing the essence of The American Dream: big houses, big cars, well-kept perks and a lot of white people. After I went undercover in some black Garifuna villages this felt weird. But weird is good.
​
At the park entrance a hysterically happy ranger dragged me inside and started explaining the two short trails I could walk. I didn't understand one word he said, but the man was clearly enthusiastic about what was lying ahead of me so I was pumped up too. 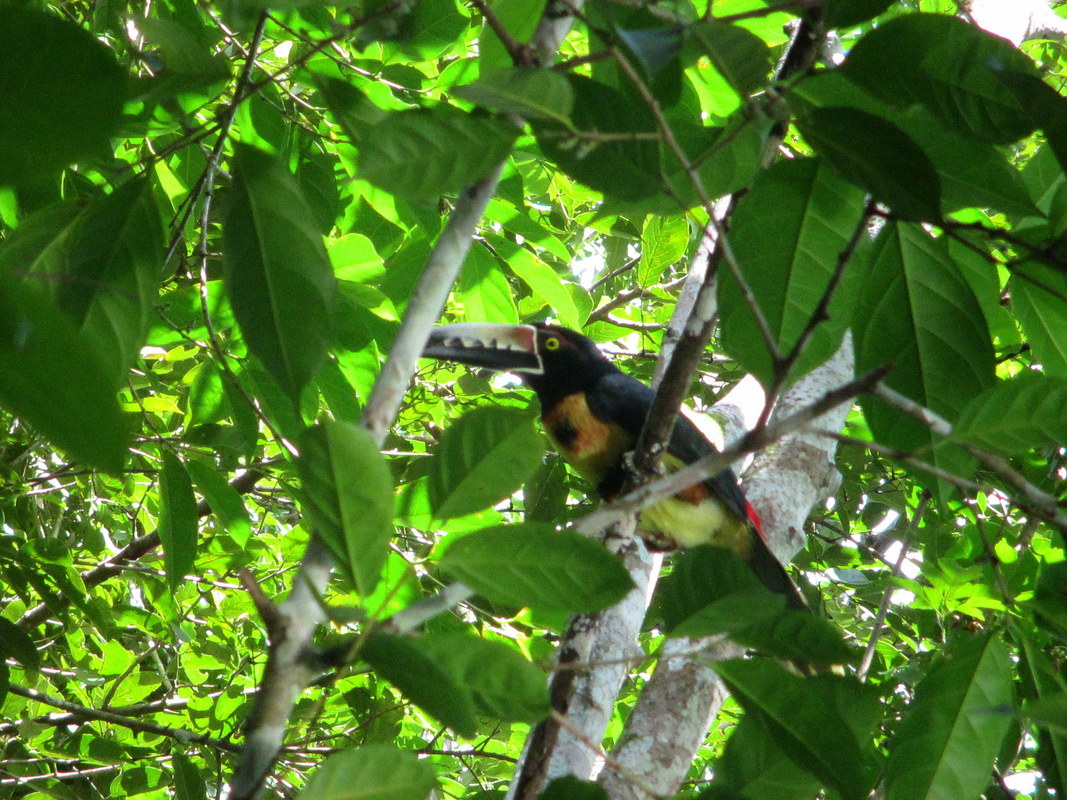 Let's start with the downside of this NP: It's very small and lies right next to the highway, so I never really got an out-in-the-wild feeling. The bright side is that there's actually a lot to see. I took the time to sit down for a bit to observe and a whole natural extravaganza passed my vision. Huge iguanas and at least five toucans hung out at a two-meters-distance from me, pretending I wasn't there. 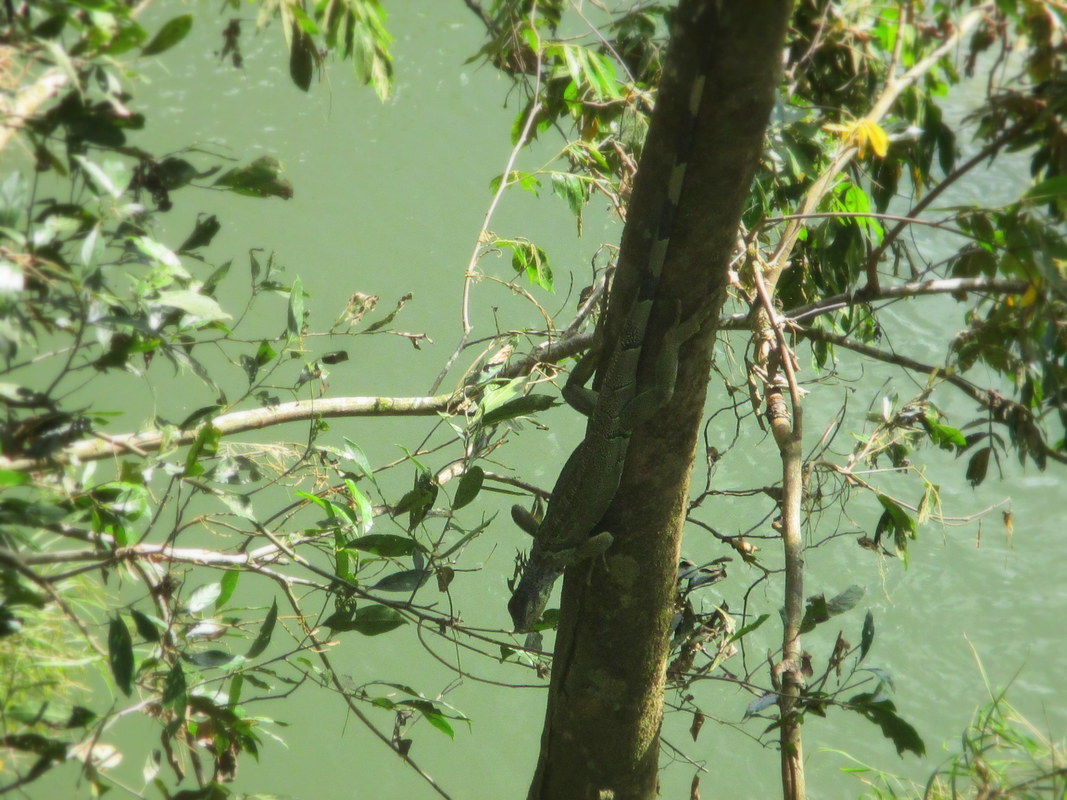 I saw a bird killing a hummingbird that just wouldn't die, he kept on slamming it against the tree trunk. I tried to intervene in this brutal spectacle, but that just resulted in him flying off with his convulsing victim. I clearly ended up in the ghetto part of the jungle, the 'wrong side of the river'.
​
I continued my hike, spotting much more interesting wildlife. I couldn't really stop to admire it though, as the entire local mosquito population would land on me if I stopped longer than two nano-seconds. It got so bad that in the sweaty tropical heat I had to put on my rain jacket, including hood, as they would zoom into my ears to suck the blood out of my lobes. Party-poopers.
​*** Psssht, want to get into Guanacaste NP for free? Walk along the highway with the park on your right side. About 20-30m before the official entrance you see a sign next to a big rock, where you can look for a small beaten path. On the opposite side of the highway there’s a dirt road going into the forest and sometimes a guy selling flowers and plants. Just saying.


The same thing would happen the next day, when three new Couchsurfers (Brian from Canada, Darene from Lebanon and Dimitar from Bulgaria) that came to Andrew’s crib and myself made our way down to the Blue Hole National Park. The place itself is a delight, but some out of hand mosquito infestation kind of ruined all the fun. So without pausing we ran through the park with its mysterious St. Herman’s Cave where Mayas used to sacrifice people to satisfy their gods (skeletons and artefacts can still be found there if you float down the cave with a guide, something too expensive for me). ​ 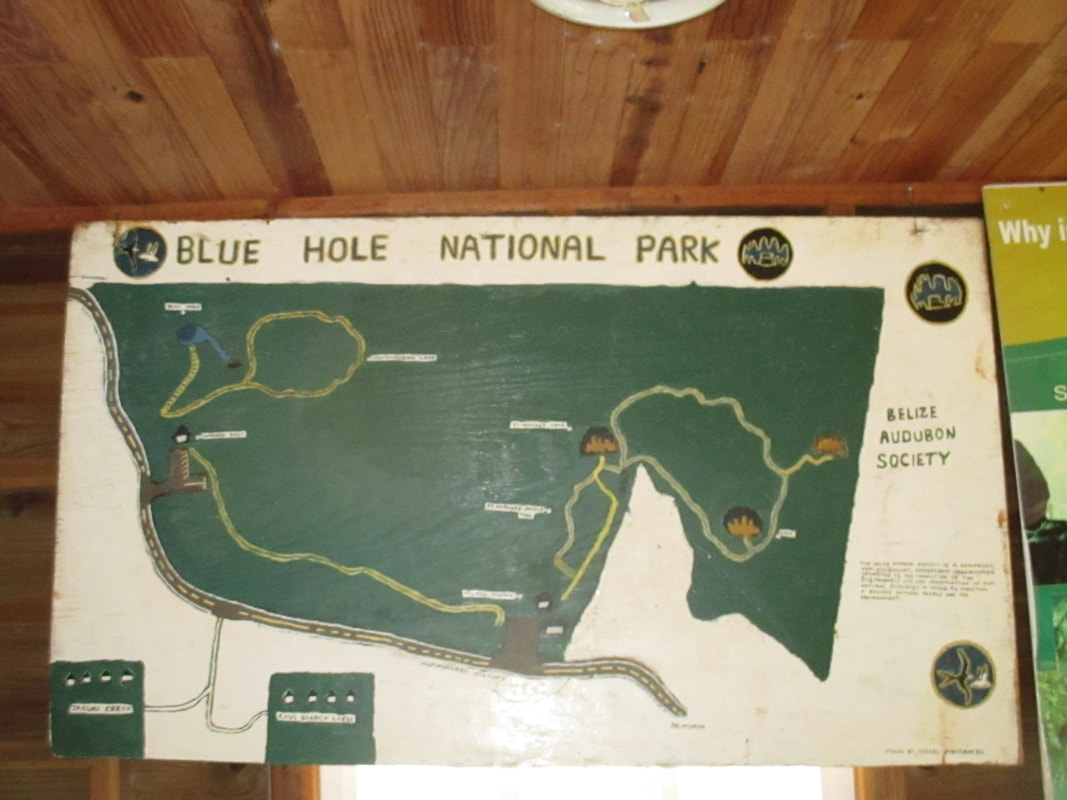 ​From there you can commit to a three-hour jungle hike, but we didn't want to run out of time for the blue hole itself so we went there instead. Well, they didn't lie: It was a hole in the ground and you could say it was kind of blue. Not taking the stinging bugs into account, the location amidst the jungly surroundings was astonishing. A perfect place for a dip. Even though the water is very cold (kind of like the Dutch North Sea on the hottest day of summer), I couldn't imagine a better break from the draining heat. Yes, just like the other national park, this place is worth going.
And there's more: A third national park close by called Five Blues Lake, some art exhibitions and a bird rescue centre. If I wasn’t meeting someone up north I might have even stayed longer, as next to the many touristic attractions surrounding the city, the place has good vibes.

And you know what, let me tell you an even better story: I came back later on! A bigger middle finger to the uninspired, negative-minded expats that told me to skip Belmopan altogether isn’t possible.

I was more than pleased to see Andrew again, who would most probably have been one of my closest friends if we weren’t living in different places. Once back, I got in touch with the passionate leaders of Belize Bird Rescue who immediately invited me over for a private tour. 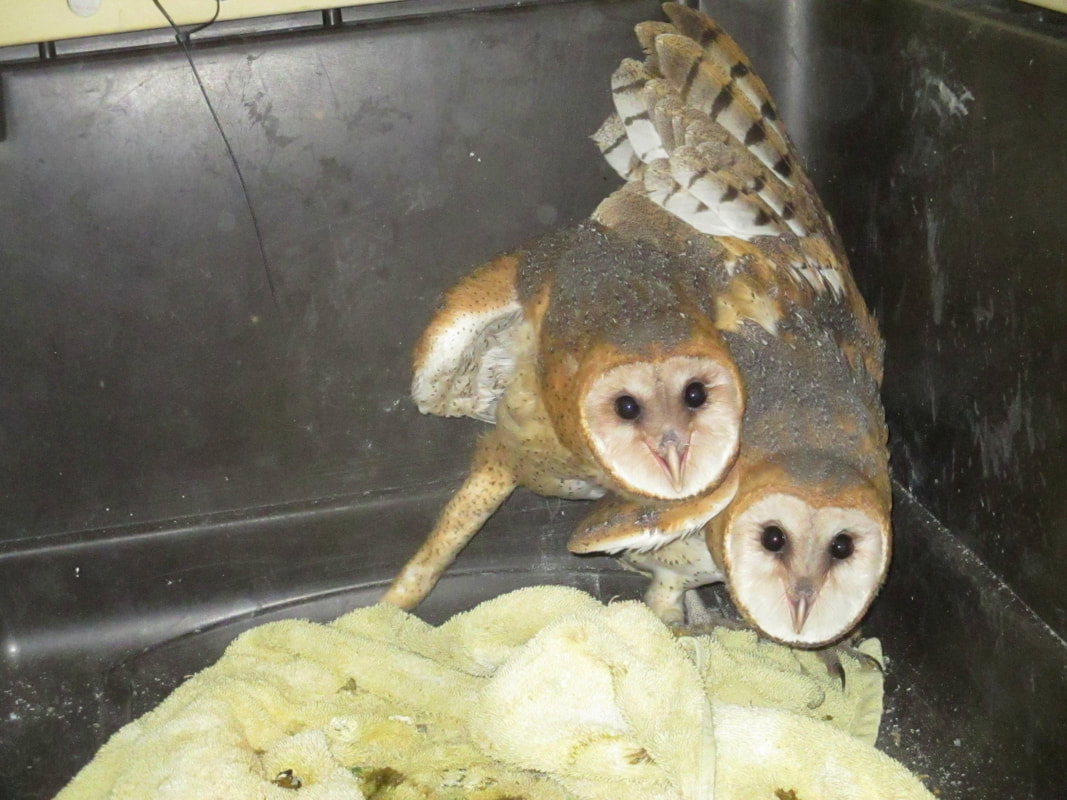 After I hitchhiked down there with a bored personal driver grateful for a distraction, one of the volunteers showed us around the cages with dazzlingly beautiful tropical birds. Ok, now I hear you thinking: Birds? Caged? Is this some kind of animal unworthy zoo or circus created to serve the selfish need of human entertainment? No my friend, you can adjust your perceptions right there. The aim of this place is to turn back the incredible harm we humans cause to these wonderful animals.
Belize Bird Rescue’s mission is to encourage empathy for and awareness of the importance of the preservation of indigenous birdlife by means of education, conservation, enforcement and rehabilitation. This is necessary as locals think it’s acceptable to capture wild birds for pet trade or catapult them out of the air to see them from up close (and then dump them somewhere). As these values are passed on from parents to children this organization provides lectures in public schools to teach children that animals aren’t material goods but fellow living creatures. 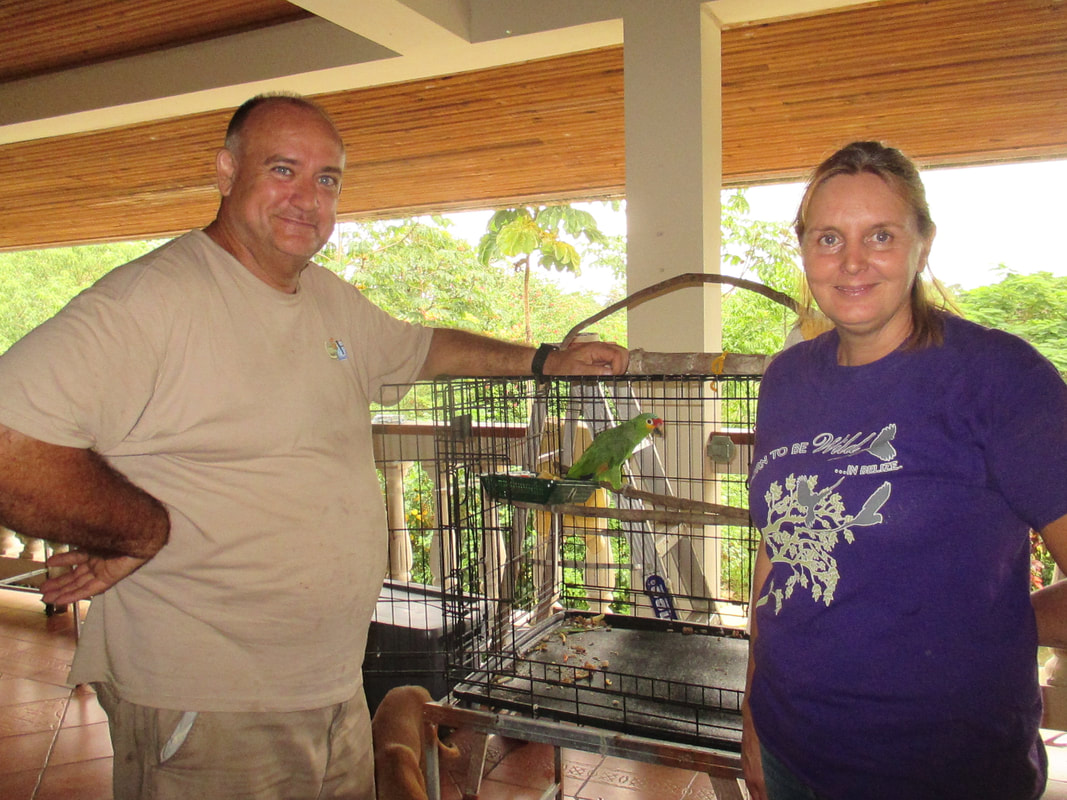 The centre itself rehabilitates former pet parrots, injured birds and orphaned baby birds until they’re ready to survive in the wild again. Next to that they regulated the license policy and laws for pet birds and advice the owners about proper caretaking. I have no words to describe my respect for this organization that is financed and managed solely by the owners and helpful volunteers. This place alone makes Belmopan a place worth going.
Need a shot of good karma? I full-heartedly recommend to donate to Belize Bird Rescue to support them in their admirable work:
​
Donate & be awesome
In order to support the travelers’ community, I spend many hours per week to adequately document all information and advices for prospective visitors, accompanied by a (hopefully) entertaining insight into my personal observations and experiences. This service is and will remain free. However, if you voluntarily want to make a contribution and support my travels and thus the creation of new stories and information supply, here is the button you’re looking for:
Donate
Related:
- Another City in Belize: Belize City
- Belizian beach adventures: Punta Gorda & Sarteneja
- A crashcourse in the Belizian Kriol language
- Maya heritage in Belize: San Ignacio
​- Check out Budget Bucket List's FAVORITE HIKING DESTINATIONS worldwide!
- Just across the border: Visit the Maya city of Tikal, Guatemala
​- Other capital cities in Central America: Panama City, San Jose, San Salvador, Managua
- A vegan on a meat and dairy farm in Paraguay
​- Nicaraguan hiking adventures: Matagalpa, San Sebastián de Yali, Mombacho & Laguna Apoyo
- Another good cause to support: Charmont Bilingual Acadamy, Honduras
​​​- The green treasures of Costa Rica: Monteverde, Tapantí National Park & Tortuguero National Park
​​- Lush, beautiful and with the bluest waters: Northland, New Zealand
- Malaysia's hottest hiking spots: visit Taman Negara, Cameron Highlands, Penang, Miri and Kuching!
​- Discover Romania's enjoyable cities: Bucharest, Brasov and Cluj Napoca
- Hiking Poland's longest mountain trail (550km) with a tent: Glowny Szlak Beskidzki - check the reports here!
- Walk like a pilgrim! 6 weeks on the Camino Frances towards Santiago de Compostela / Finisterre (900km)- check the reports here!​