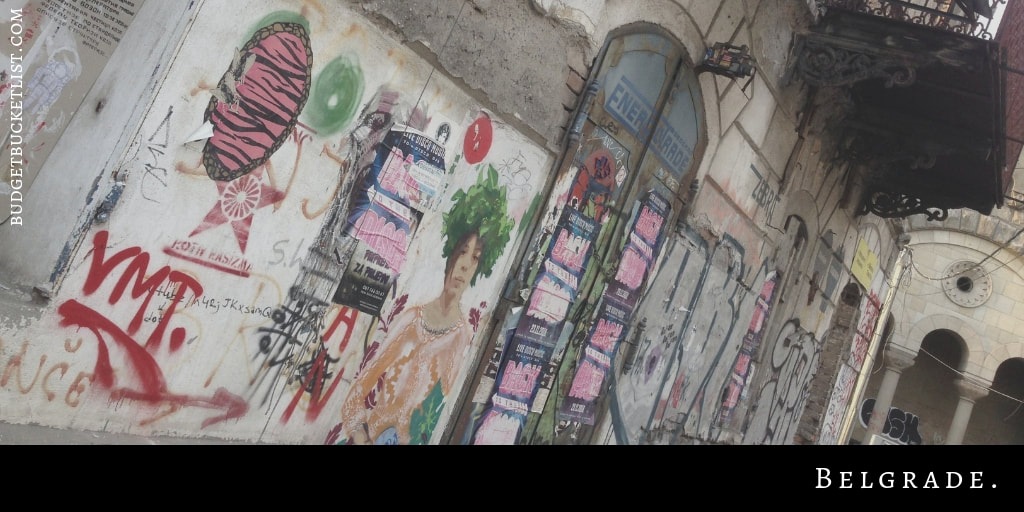 Belgrade. It’s not for everyone. It isn’t particularly pretty, nor has it that typical European historical charm that usually wins me over so effortlessly.
​
In fact, while hitchhiking from the Romanian border towards the Serbian capital I wondered if the Serbians even liked the place themselves. Every friendly local offering me a ride - without the slightest hesitation - seemed to be utterly confused about me, a western European, showing interest in their country for touristic reasons. Yet, at the same time, this almost shameful modesty didn’t exclude fierce patriotic sentiments, especially in political opinions and cultural engagement. I was about to find out why.
The Serbians' self-image is a sharp reflection of their eventful history.

Serbia is a country with a turbulent recent history, to put it quite lightly. After spending a handful of centuries under the foot of the Ottoman Empire, the 20th century finally brought independence… and wars. Many, many wars. Besides the standard European dose of World Wars, Serbia got a series of genocides, reunion- plus separation movements, and civil wars on their plate, both on the giving and receiving end. However, no matter their role in every conflict, be it the villain or the victim, the majority had one major aspect in common: They publicly had to take the fall for it, the US pushing them into the unwanted position of overall scapegoat, shedding a one-sided light over complex situations containing transnational manifestations of evil... The downside of having the world’s most manipulative and powerful media giant against you. As a further humiliation, the once so proud Serbs had to helplessly witness the western infiltration of their government, selling out everything that was legitimately theirs or what they once stood for. A fine example of how a government and its people operate as two entirely different, almost opposing entities.
​
For a more detailed overview of Serbia’s recent history: scroll down.
​
Too busy to read now? No problem, save it for later!
​Save on Get Pocket | Save in Browser Bookmarks| Save on Instapaper 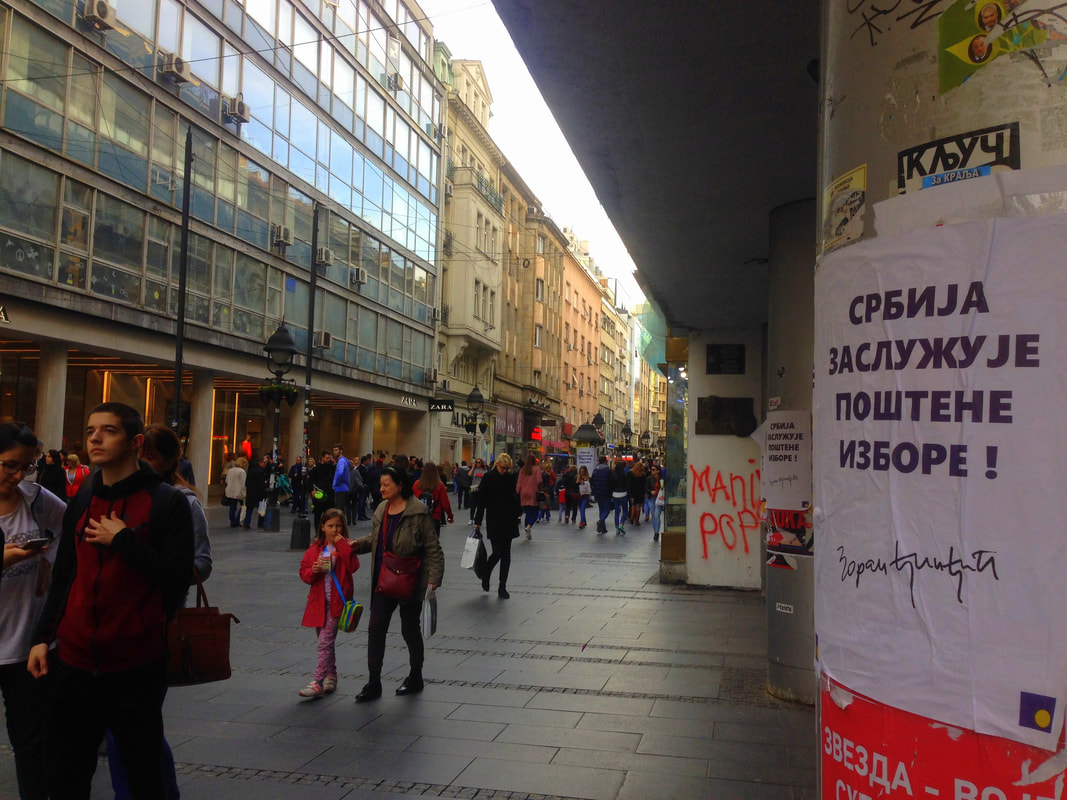 Just a fragment out of a random Couchsurfing profile in Belgrade...

​​
So what does that mean for you, an unsuspecting but now educated visitor? The same level of ambiguity in both architecture and sightseeing, I’d say.

Visits to landmarks such as the formerly bombed Yugoslav headquarters, the NATO-bombed Chinese Embassy (entirely covered up by the western media) and endless lines of soulless communist buildings could be part of your leisurely city trip. At the same time, I witnessed modern (one might argue: capitalist?) shopping streets, and western music pumping out of downtown nightclubs and floating disco’s along the Donau river.

Graffiti-stained walls alternate with high-end art in the National Museum (filled with, however, mainly international artists such as Van Gogh, Renoir and Picasso). Crumbling viaducts, severe traffic jams and air pollution goes hand in hand with Nikola Tesla, probably Serbia’s most famous resident to ever walk the Earth, Belgrade scattered with tributes in his honour. I found an ever-expanding city crawling out of its seams in a constant fight with nature, its forests and surrounding mountains being simultaneously preserved and contaminated.

I found a city I just couldn’t get my head around.
But little did I know that Belgrade didn’t play all its cards yet. It had saved a secret charm attack until the very last night I was there, showing a side shielded away from political regimes and believe systems… a part of Belgrade that wasn’t communist or capitalist or Yugoslav, but simply gypsy (or later on, more trendily called: ‘bohemian’).

Luck and sheer randomness led me to Skadarlija. Asphalt with potholes turned into cobble stone streets, gypsy music reached my ears. I followed the cheerful sounds to its source and peaked into a little basement window, catching the eye of the contrabass-player. He signed I should come in, which was the invitation I was waiting for all these days without knowing I did. As the only guest I was positioned on a gigantic chair in between the musicians, a throne surrounded by music… How could I have anticipated that what was about to follow turned out to be the highlight of my entire visit to Serbia… or the entire Balkan, if you will?
​
One round of drinks was the fare of a private concert that continued until the dead of night. A night that changed my mind about Belgrade, and brought about the motivation the explore Serbia in all its variety. A variety that doesn’t necessarily expose the country’s weakness, but more so its strength.

Serbia’s recent history in a nutshell:

In spite of the multicultural melting pot, a Serbian Orthodox majority was believed to dominate the Kingdom, triggering feelings of hatred in the minds of the Croats. This quickly turned into murderous terrorism by the Ustaša movement (funded by the Vatican, because God = love). The Croats weren’t done with the Serbs yet, as thereafter some dude called Adolf turned the Yugoslav territory into the Nazi ‘Independent [puppet] State of Croatia’ during World War II. With the help from both Hitler and the Pope the Croats started a genocide against the Serbs, building proper concentration camps for the cause (the general goal: 1/3 killed, 1/3 expelled ,1/3 catholicized).

After the defeat of the Nazis in ‘45, and the exodus of Croat/Nazi war criminals to primarily Argentina, communist leader Tito (Croatian/Slovenian) took over in the new Social Federal Republic of Yugoslavia, with also Macedonia, Bosnia and Montenegro added to the mix (creating three new ethnicities). After breaking his alliance with Stalin in 1955 and making a pact with Albania, anti-Serbian Tito opened the Yugoslavian border to allow the Albanian influx into Kosovo, simultaneously prohibiting Serbs to settle in this land which was officially theirs. Nationalist movements easily sparked on both sides, Albanians battling to start a separate Yugoslavian Republic of Kosovo, while the Serbs (led by Milosevic) fiercely refused to let this happen as they hold the majority of their cultural heritage in this specific region.

After the fall of the Berlin Wall and demise of communism, Yugoslavia started to crumble in 1991 when successively Slovenia, Bosnia and Herzegovina, Macedonia and Croatia left the alliance… Once again not without bloodshed  (the Croatian War + the Bosnian War between Bosnian Serbs and a Muslim-Croat Federation; costing the lives of many civilians on both sides in, among others, Srebrenica - however, only the Serbs are prosecuted for their war crimes). In the meantime, the Kosovo struggle continued between the Kosovo Liberation Army and the Serbs. The USA, needing a capitalist puppet state close to Russia, baptized the KLA from a terrorist organization into an alliance of freedom fighters and joined forces to obtain its independence: The NATO started bombing Serbia, killing countless Serbian civilians and destroying local infrastructure. To stop the bombing Milosevic united with the NATO, causing a national outrage among the Serbs.

The corrupt and pro-Western/American leader Dindic took over, selling out Serbian companies to foreign hands. The promotion of Western values and stimulation of Serbian ethnic self-hatred takes effect and escalates when, once again, only the Serbs are publically prosecuted for their war crimes and one-sidedly portrayed as the cause of evil in all recent wars, which is only partly true. In this era, Serbia grew out to be the most corrupted and crime-ridden country of Europe… and after martial law came into effect right after Dindic’s assassination, triggering severe police violence and undemocratic arrests/murders, Serbian self-loathing and immorality reached its peak.

But it didn’t stop there. The Kosovo War intensified, during which a large share of Serbia’s ancient monasteries were burnt down. Moreover, in 2008 Kosovo – backed up the NATO/USA – declared independence without UN recognition, followed up with riots in Belgrade during which the US Embassy and McDonalds were attacked and destroyed. The struggle continues until today, Serbia’s government and people refusing to recognize the Kosovo border, while its people simultaneously try to somehow preserve Serbian values and sentiments in a country led by an obedient pro–Western president.