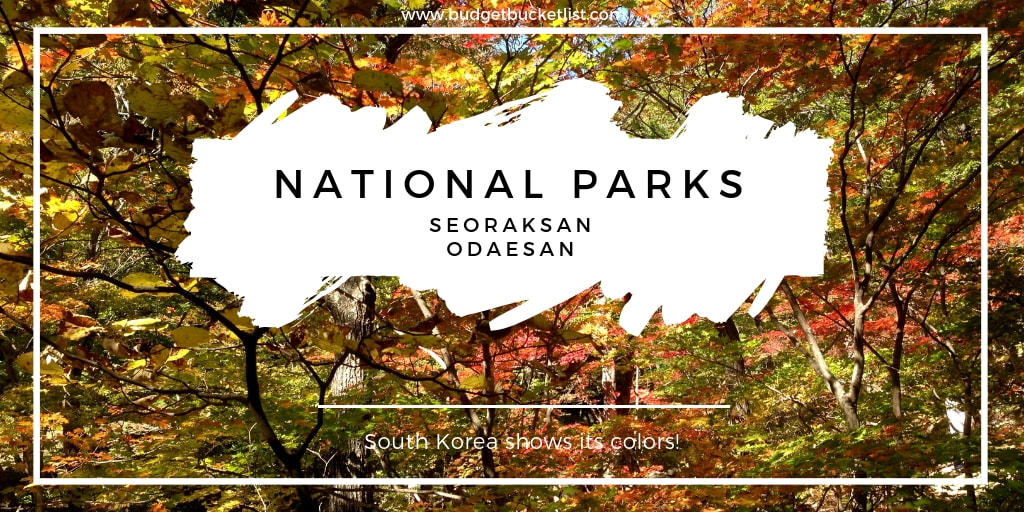 Every nature buff needs its weekly (daily) shot of green. If I spend longer than a fortnight in between city concrete, my subconciousness, trembling for adventure and oak-filtered air, simply banishes me out until I return with majestic mountain views burned on my retina.
​
Luckily, no matter the modest size of South Korea, national parks (22 in total) are never far away.

Northern Gangneung seemed an outstanding base to combine two in one go: The national darling, the famous Seoraksan National Park right on the beaten tourist path, and the lesser known and harder accessible Odaesan National Park. 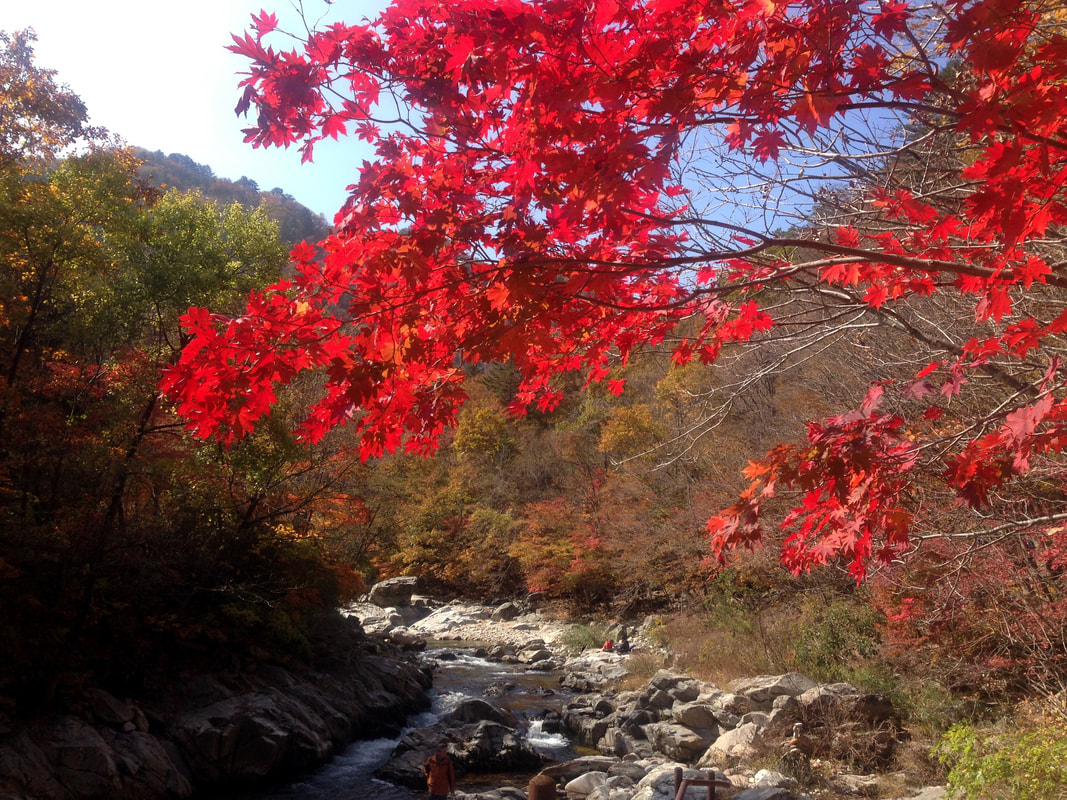 [To lazy to read today? Scroll down for the two travel video's that do the work for ya]
​
Couchsurfing

Grateful I let a low-priced city bus drive me out of the city smokes of downtown Gangneung, right towards the emblematic harbour town of Jumunjin.  Under the aromatic curtain of sea salt and ill-fated fish having the last bit of life smoked out of them hides the Kangdbang Guesthouse, run by a polite man that looks like a boy* called Sang-Yun. I found this terrific boyman on the Couchsurfing network where he occasionally offers one of his normally paid-for hostelbeds for free to curious backpackers. To me. A level of incredible hospitality that happened to me many times before in places like Chile, Argentina and Honduras, but never ceases to amaze me.
​

* Where the sun-eroded faces surrounding me during my recent adventures Down Under (thanks to their monstrous gap in the ozon layer) made me feel like 20-something again, Asia katapults me straight to looking 40ish, for local standards. If anyone has some Asian genes for sale, shut up and take my money.
Gangneung / Jumunjin

Gangneung, as well as Jumunjin, have some attractions of their own to suck in the crowds, such as the Museum of Art*, the Fish Market / expo of cruelty and the endless supply of brisk white beaches regularly used as film locations for the internationally recognized Korean film scene (and more important for us travellers: many with free camping spots!). Also, if besides the mentioned shot of green you’d like to inject a daily dose of caffeine into your bloodstream, you’ll definitely find your needs met in the place actively being re-marketed as Coffee Capital of South Korea.
​
​
* I tried to visit every single museum on Tripadvisor and Maps.me, but besides the Museum of Art (free) and the Hassla Art World (paid), many were either untraceable, non-existent or entirely beyond walking distance.
But that’s not what I was there for. I had an entirely green program. Agenda point one:

In order to work towards a literary climax I shall start with a firm disappointment: The well-known and famously demanding Dinosaur Ridge Trail I was planning on completing during an overnight trip was rigorously wiped off the table by Korea’s rules-and-regulations-fetish. As well as by a population of 51,47 million inhabitants of which an estimated 99% could be classified as die-hard hiking aficionados. You see, there is an excellent, cheaply priced shelter-network spread out over all national parks, but in order to use them reservations generally have to be made far in advance. Months, when it comes to national sweetheart Seoraksan. That’s not how my mind works. I can’t even tell you what I’m doing tomorrow or tell you which country I’ll be in a month from now...

Another option is skipping a night and starting to hike at m-f’ing 3AM to blast through for 14 bloody hours. It aren’t the 14 hours that scare me, it’s the lack of sleep where I draw the line. Hardcore as I can be, ‘fun’ is an essential ingredient for any hiking endeavor... A sentiment triggered by brain stimuli that are entirely crippled in a state of insomnia.

In short: I can’t treat you on that story. But hey, there are tons of them on the wild wild web. And I read basically every single one of them and I was utterly surprised no one gives any practical information... and all what the national tourism board comes up with is in Korean. So that’s where I come in: 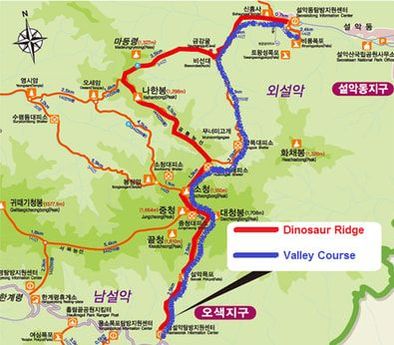 * Other overnight trips (for which bookings need to be made via this link – the low rates are paid in cash at the shelter) are the Baekdamsa Pilgrims Trail, the Namgyo-ri Ridge Trail and basically any combination that can be made based on this map: 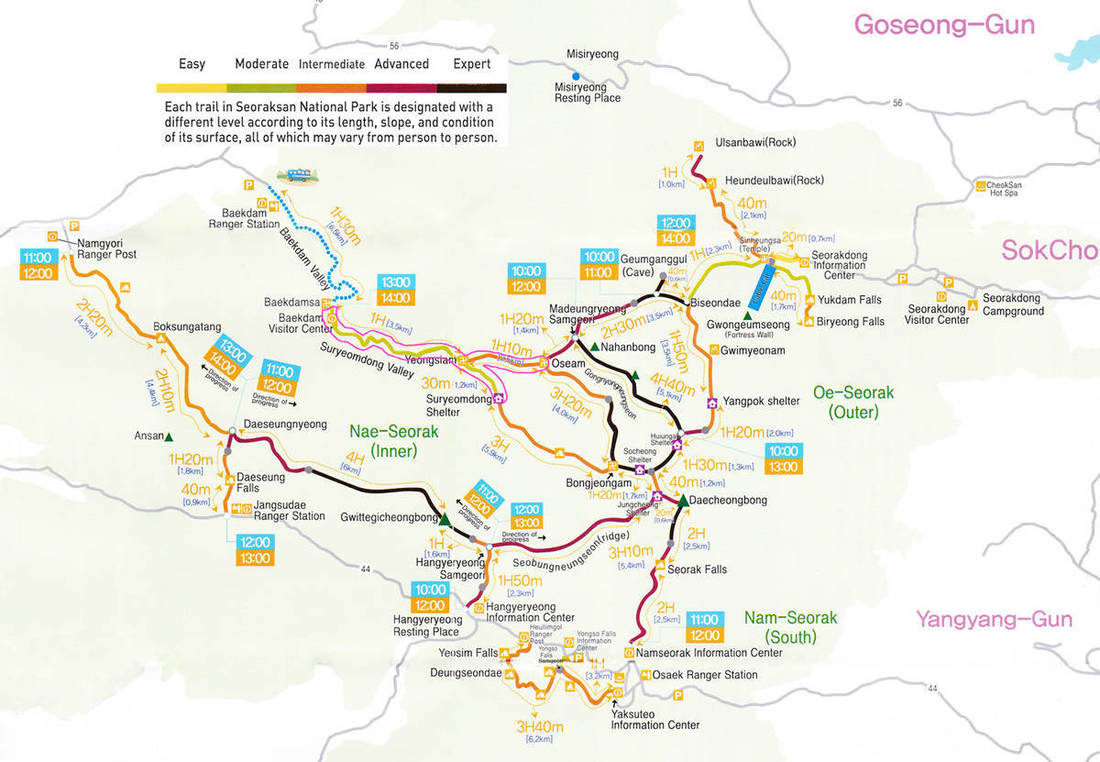 ** Be aware of the check off points mentioned on the above map, indicating until which times park rangers allow you to pass (and believe me... they drag you back when you break their holy rules, I tried on many occasions).

*** Always bring plenty of water, but don’t be too stressed about it. Crystal clear and clean water is available at every single river and temple you can see on the map.
​
**** Buses to Sokcho leave both from Seoul and Gangneung, the latter passing through the Jumunjin Terminal. If you arrive from the south get out at the Seoraksan Park Entrance, referred to as “Mulchi’, where you can take bus 7 or 7-1 into the park (paid by TMoney, Cashbee or cash). Bus 7 and 7-1 also pass the Sokcho bus terminal and go very regularly.
​ 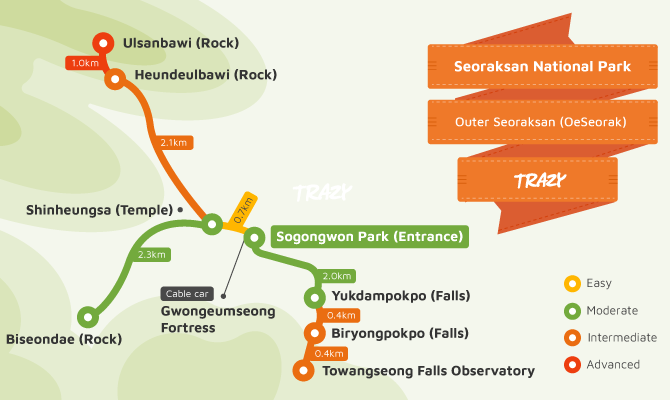 So what’s left for the frustrated (or relieved) daytripper? Luckily, a broad spectrum of options! The most accessible trails are reached from the main entrance just outside of the rather developed town of Sokcho. The most popular one comes undoubtedly in the shape of the Ulsanbawi Rock, a great alternative for the Dinosaur Ridge due to its almost unearthly form. You’re reading this blog, which means you’re doing your research, so chances are you’ve already read about this ‘strenuous’ hike taking a generous 3-4 hours 1-way up...  Well, don’t worry about that, I timed it and I was up in exactly 00:52 minutes and down again in about half of that. It’s steep enough, but the actual staircases surrounding the peak take all physical difficulty away for the seasoned hiker. Minimum effort for maximum rewards:
Which means you have time for yet another one! The Geumgangul Ridge (via the Biseondae Rock) is a great start. Whereas the Ulsanbawi Route steeply ascends from beginning ‘till end, this one leisurely starts on a long, paved, flat path, eventually sticking out straight up into the mountains. This is where most people turn around, but where you continue. Because it’s going to be s-p-e-c-t-a-c-u-l-a-r.

Yes, you’re gonna feel this one in the buttocks, but it’s gonna pay back every calorie you spent. Far-stretched bare peaks rigorously sticking out of seas of green vegetation, the proud mountainous spine stretching out over entire South Korea. To think that the 1-day-dinosaur-ridgers don’t even see this stretch of the hike, as it will be completed in the dead of night... I’m starting to regret it less and less ;-
Seoraksan’s dark side

All these words of praise and glory? Do I have nothing to bitch about when it comes to this crushed and crammed natural Promised Land? ‘Course I do. Because its popularity is literally turning against it. Disneyland didn’t make its entrance in Korea yet, but quite frankly, it doesn’t have to... Seoraksan is already doing the job. If you’re all pumped up for a one-on-one-encounter with virgin nature you’re in for a downer: There was literally a traffic jam going into the park, so bad I forced my way out of the bus to walk the last three kilometres to reach the entrance. There, crowdsurfing over Asian families dressed in fluorescent leggings and suncaps I paid for a f*cking entrance ticket to consume nature. Since when did nature become a capitalist commodity? Since those humble Buddhists came in, that’s when!

The Korean Buddhist Enterprise ©, monopolizing national park’s entrances since 4BC.

The same can be said about Odaesan. The miserable public transport options (I therefore hitchhiked) and relatively remote locale serve as a deceiving disguise of a tucked away raw paradise... but Odaesan can’t hide from the never-ending parade of crammed tourbuses delivered straight out of the green-deprived capital Seoul. Thanks to the Buddhist-mania also this national parks carries an entrance price, even if you skip the so-many’th temple entirely, but let me reassure you: It’s all worth the pain.
​
The fact that you can literally walk over heads is a strong indicator of the level of beauty jammed in these 303.9 km² of delightful national park. Especially in autumn, Korea’s cracking color carnival.

No matter how big the national park, the day-trip options come down to the same combination of trails... the full loop from Sangwonsa if you’re in for a challenge, up and down the Birobong Peak (1563m) if you want a milder but still pretty damn steep course, or a gentle stroll up to one of the several temples if you can’t be arsed. Every single trail, including the flat ‘n easy one from the Woljeongsa to the Sangwonsa Temple, is absolutely world-shattering beautiful.

​
​* As you can see on the map, also an overnight trail to/from Sangwonsa towards the northeastern Sogeumgang Campsite is available, with the opportunity to stay overnight at the Noinbong Shelter (no reservations needed). You will need to have private transport arranged though, as there aren't any public buses on this side of the park.
Mind the Koreans though, as they won’t mind you!

The (non-existent) Korean Hiking Etiquette never ceases to surprise me.

The fact that basically everyone in this country hikes doesn’t mean everyone’s good at it. Hell no, if I my quote my dad: “Slow as a turd in a funnel.” And if you think you can easily just ‘take over’, you’re in for a disappointment. Koreans have the sublime talent of being entirely oblivious to their full-scale surroundings. You can politely ask, cough, tap their shoulders, scream, click your hiking poles right next to their goddamn face: It won’t enter their field of consciousness. Worse, they will proceed to stop walking entirely, unannounced, as there’s nothing more crucial in Korean day-to-day life as taking selfies. All the freaking time. That there’s instantly forming a whole line of impatient hikers behind them is no biggie, they won’t notice it anyway. As I said, it’s a gift.

That said, their permanent state of absent-mindedness I can somehow forgive them, however annoying the consequences. I mean, they’re Asian after all, you don’t want to know how many nearly-dead-experiences I had when trying to circumvent around whole truckloads of entirely ignorant Japanese tourists when riding a bike in Amsterdam. It’s in their blood... It’s the ones that do see you that grind my gears. Walking towards you with their hiking poles spread out like a lumpish clumsy spider they look you straight in the face, not intending to give in on one centimetre of hiking trail. As they approach I, already clenched to a rock or being whipped in the face by off-trail vegetation, wonder in panic how I could possibly give them more space then I’m already giving?! Jumping off the cliff to a quick but certain death, or bouncing into a tree, that are the only options left. The options they expect you to choose from, as a Korean giving way voluntarily, that’s as likely as asking an Englishman to visit a beach and stay sober.
​
But when in Rome, do as the Romans do. Bulldozer right through. Straight forward into the purple fluorescent sun caps.

And don’t forget to look around, will you? Because it’s pretty damn gorgeous. 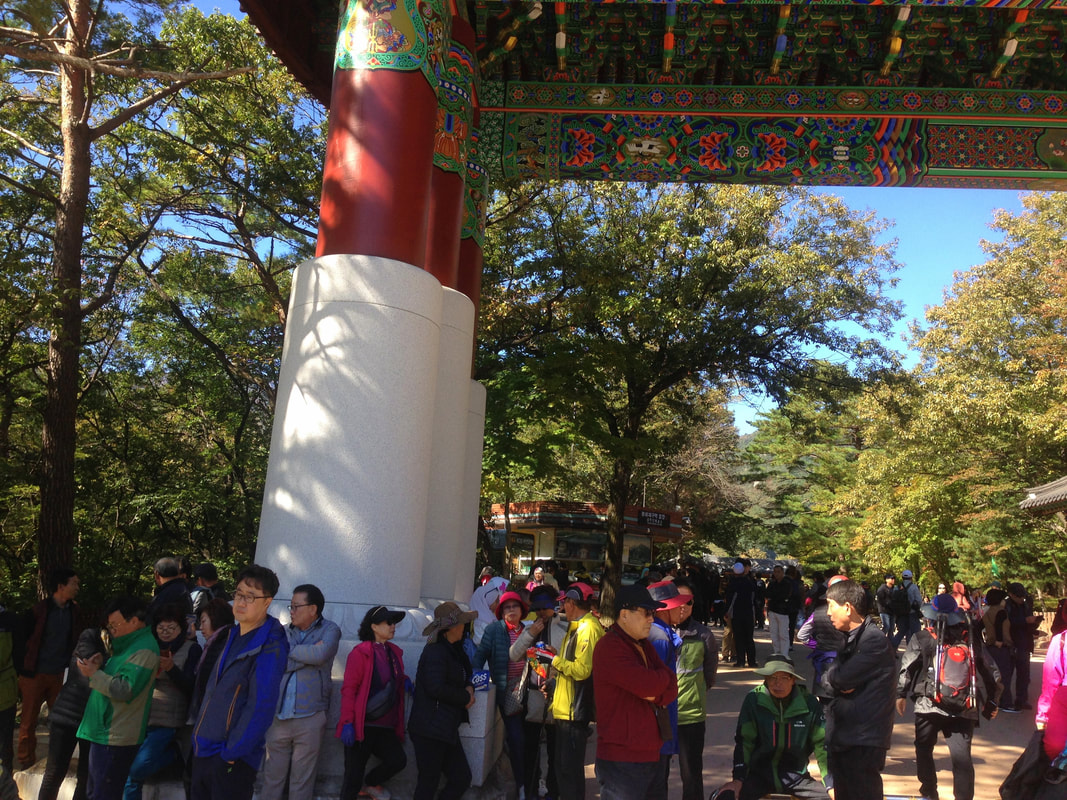 * Public transport options are severely limited, resulting in absolutely inhumanely filled buses transporting about 700% of its capacity. Odaesan National Park has two bus stops, at the Sangwonsa Temple where all main trails start and a bit earlier at the Woljeongsa Temple (there's a trail and a road in between two temples).

All Odaesan buses pass through the Jinbu Terminal, from where buses can be taken to the west (Seoul) or east (Gangneung / Jumunjin). (Expensive) trains also serve Seoul. I translated the bus schedule for you. You're welcome. 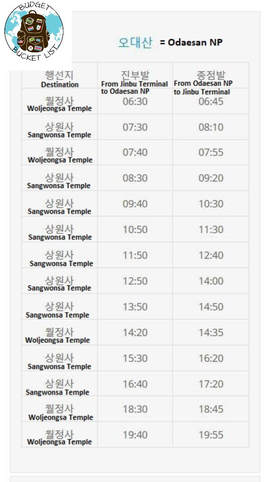