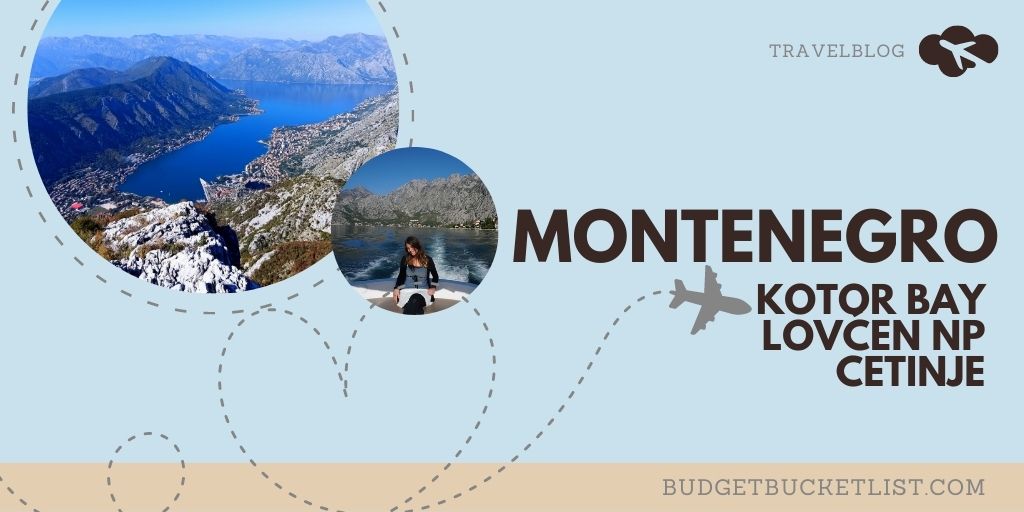 When visiting a country, every traveler has the absolute freedom to model and mould their own personal itinerary, depending on time, financial resources and personal preferences. There are however certain pinpoints that not one single visitor will forgo… in Montenegro, this is Kotor Bay. Believe me when I say I tried… the online wave of mass hysteria preceding my arrival almost convinced me to stubbornly loop around it, in search for the lesser-visited underdog-destinations of Montenegro (such as Prokletije National Park). Thank goodness I ended up tossing my prejudices out of the window, as this stretch of coast could easily be considered one of the most precious ones of the entire country. Not in terms of sand beaches, as you’ll need a magnifying glass to trace them down in this area.* However, most definitely with regards to a slap-in-the-face-combination of blue bays enclosed by the region’s prime national park, melodramatically dotted with a series of villages. Each village represents the national cultural heritage in its purest essence: Kotor, Perast, Risan, Dobrota, Muo and Prćanj.**


* Check this blog to find the best sand beach destinations!
​
** Tivat is located on the outer side of the Vrmac Peninsula, where the unique ambiance of the inner bay gets lost in a more urban hustle and bustle. Therefore, it won’t be covered in this article even though it forms part of the Kotor Bay area. That said, you can read more about Tivat as well as the alluring Luštica Peninsula in the Montenegro Coastal Towns Blog. 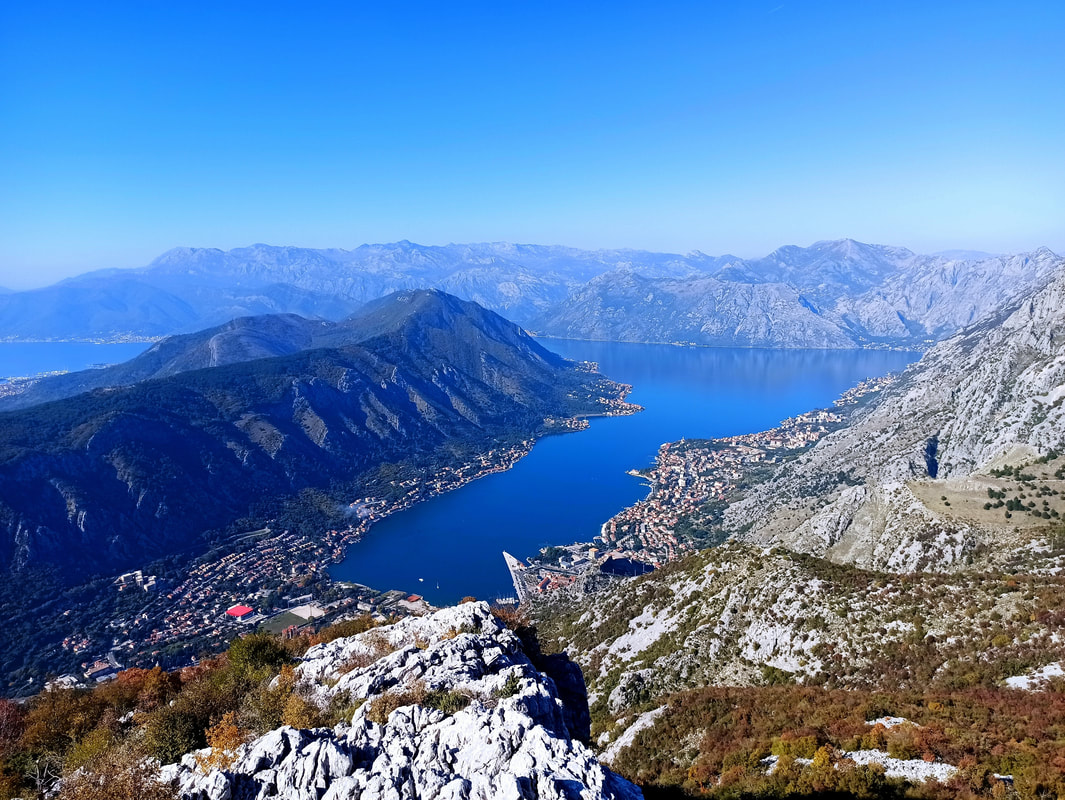 Too busy to read now? No problem, save it for later!
​Save on Get Pocket | Save in Browser Bookmarks| Save on Instapaper
Looking back in time, the Kotor Bay area gained relevance as an intermediary between the East and West, as well as the Adriatic and Mediterranean. This premium positioning didn’t only lead to prosperity, but also blended a variety of arts and influences. One can notice the subtle differences between the towns… for example, Risan’s main influence stems from the Illyrian and Roman times, while Perast prospered in its co-existence with the former Republic of Venice, which is still clearly visible in the town’s current architecture. Kotor’s historical value seemed to have abruptly disappeared when a disastrous earthquake in 1979 destroyed the town. However, with tremendous efforts Kotor was restored to its original glory. With only a small chunk of the population returning afterwards, the focus was shifted to tourism resulting in even more careful preservation.

Today’s activities at Kotor Bay largely evolve around the appreciation of these historical influences, every town along the bay inviting for a short but thorough city walk during which its hard to suppress the urge to photograph every single corner, church and square. Whereas the inner cores of the separate municipalities are best explored on foot, getting around can be done easiest by bicycle*. Not only the recommended way to admire the bay from all its precious angles, but also to bypass the traffic madness which haunts this destination in summer. That said, nothing beats a boat ride* to fully experience the Bay of Kotor. Tasting the salty air on your lips, while you gently rock along on the waves splitting against the bow of a boat smoothly navigating over translucent waters... You squeeze your eyes and gaze up through the sunrays at the steep peaks of Lovćen dramatically rising up around you… If the pure bewilderment didn’t already take away all words, the only thought that’s left is “what a place!”


* For confident cyclists only. The roads are very narrow and traffic is hectic. Plus, not all drivers are used to taking cyclists into account, so you have to be very vigilant. 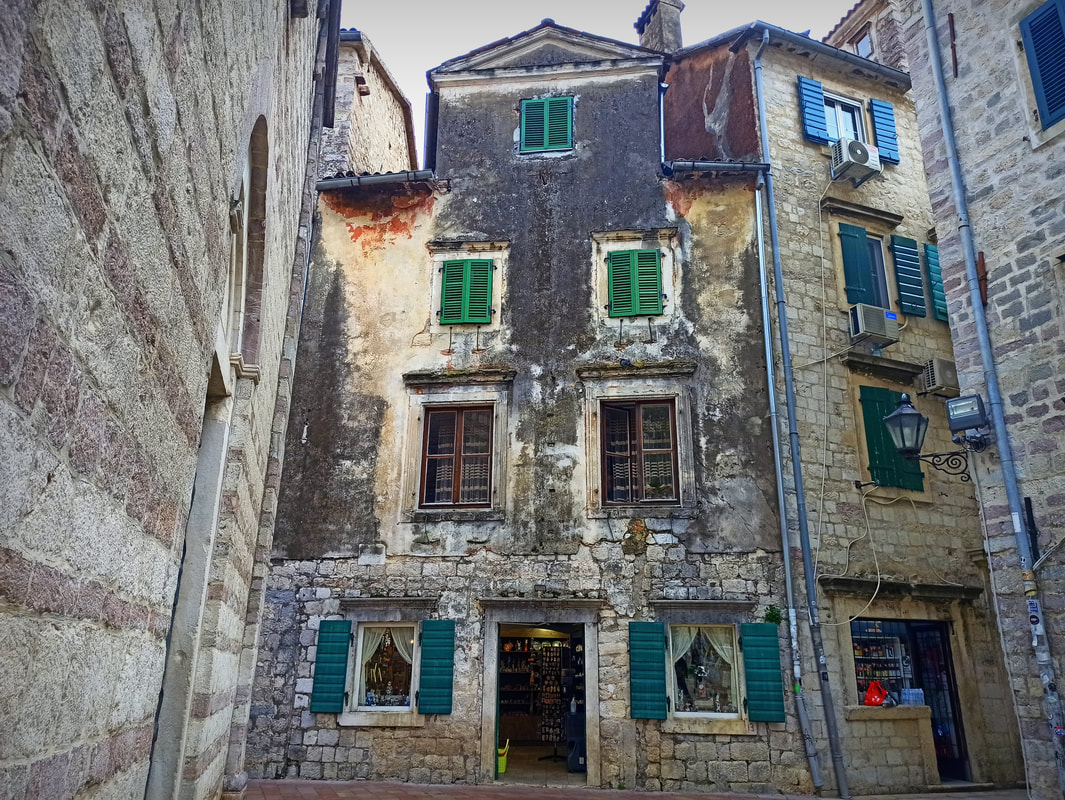 ​* Unlike the pushy vendors swarming around Kotor’s harbour trying to lure you into their overly filled speedboats destroying the ecosystem of the bay’s marine life, I enjoyed the laidback rhythm and personal approach of Captain Ivan. A man who lives the Boka Kotorska, sharing an inexhaustible sequence of stories and anecdotes about the bay and its surroundings to whomever is lucky enough to listen. The boat tour includes a visit to Perast and the Lady of the Rock Island. Pre-booking is necessary and is possible via this link. Tours start either from Kotor or Dobrota / Ljuta (a cheaper and quieter place to stay outside of the Old Town) or another pick-up point on request.

**  In order to get to the free castle entrance point, get out of the city walls, go right, cross the bridge and go right again at the Voli supermarket. Walk until the very end of the road, with the water on your right side, until a trail starts zigzagging up. The trail is on Google Maps and Maps.me. Go up until you see a little house, go left in front of it to get a bit higher and bow back right again towards the castle walls. There’s a ladder to get up into the hole (at least when I was there). You can walk back via the official way (if you start from there it costs €8 – anno 2021/22).

*** The Tre Sorelle Palace is associated with the legend of three sisters falling in love with the same handsome captain. They lived separately in their respective parts of the palace waiting for their beloved captain to return, but this never happened. Every time a sister died of old age, still waiting, their window in the palace was walled in by the others… until the last one died, with no one left to wall in the window anymore. Recently the new owner opened up the windows again, as such eliminating the proof that this might not have been a legend after all…
Cetinje

I was about 3 weeks in Montenegro, already full of stories and fond memories, when I realized about 95% of what I had been experiencing so far was nature-focused. Fantastic news of course, as that holds my main interest… and while the Balkan offers superb hiking- and mountain adventures overall, Montenegro runs off with the first prize (potentially shared with Albania, I found out later). However, I enjoy absorbing the human, cultural side of a country as well. Represented in art, literature and a history shaped by the actions of mankind, one can attempt to grasp the essence of its people. This was a straightforward quest in countries such as Serbia, in light of recent wars and struggles outlining and openly displaying a very clear image of their national identity… or in Bosnia and Herzegovina, where one museum after the other is established to remember and honor the heartbreak of its latest decades. Yet, for some reason, this turned out to be a complicated mission in Montenegro. I was roaming through one historical town after the other, but couldn’t find one proper museum which could explain the layers of history I was actually experiencing. I noticed statues and artwork on the streets, but couldn’t trace down one gallery or exhibition enlightening me about the nation’s finest artists… not even in its capital Podgorica (not taking into account that one Art Museum displaying paintings of faeces surrounded by rags of toilet paper). Yet, I knew this was all going to change in Cetinje, the country’s former royal capital and focal point of the national art scene. 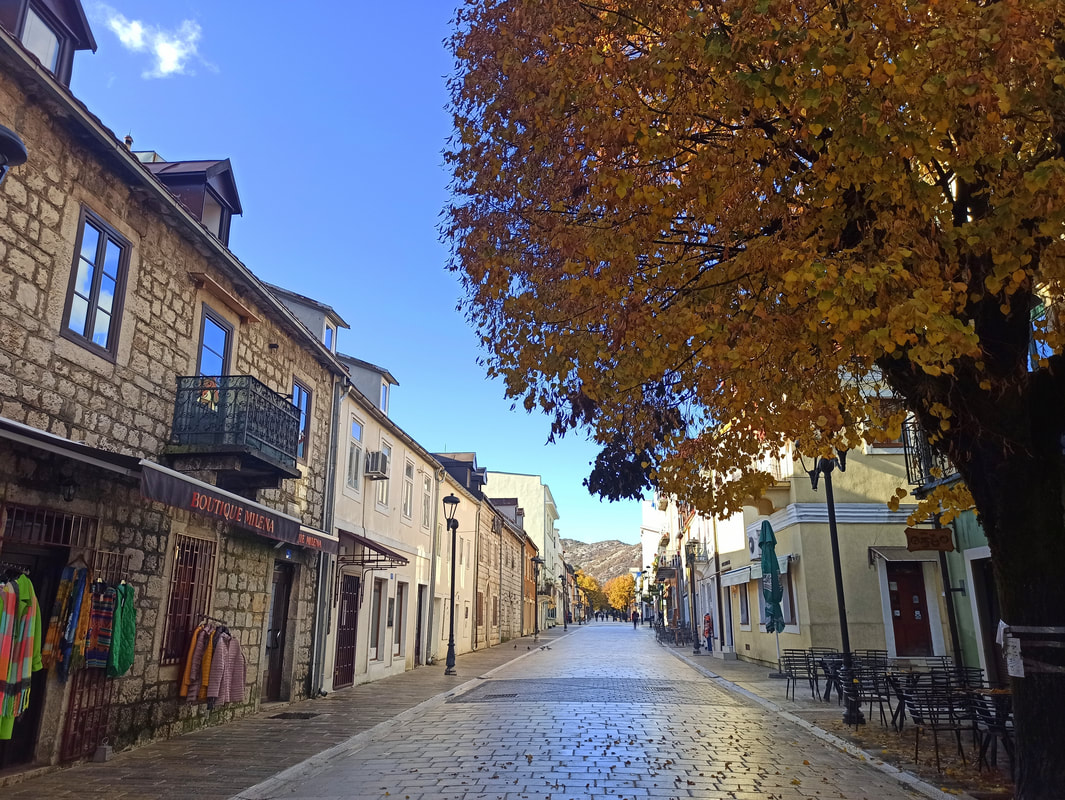 Cetinje, named after the Cetina River, was founded as a capital of the state in 1482 by Ivan Crnojević, the Serbian leader who in an alliance with the Republic of Venice guided the resistance against the expanding Ottoman Empire. The location at the foot of Lovćen was deemed easily defendable in an ongoing series of attacks that would last the centuries to follow (a period with short periods of Ottoman rule – that said: during the biggest chunk of this history timeline Cetinje was the only “free zone” of Montenegro). Cetinje maintained its significance over the centuries, especially as the home of Petar II Petrović Njegoš, a prince-bishop, poet and philosopher… a man who is considered one of the most prominent literary figures in Montenegrin history. The Billiard House, his royal residence in Cetinje’s centre, can still be visited today. Once Montenegro obtained independence as a separate country during the Congress of Berlin in 1878, Cetinje was crowned its official capital. Serving as a location of the main national institutions, such as the National Library, the State Archives, and the National Museum, it attracted artists and intellectuals triggering the rise of a vibrant educational, cultural and artistic scene. In the 19th century, Cetinje managed to withstand the test of time… which definitely wasn’t mild considering the crises suffered during the Balkan Wars, WWI, WWII, and the communist Yugoslavian era. Even though the capital-title was handed to Podgorica, “Titograd” at the time, the remnants of its glory days complemented with a fresh wave of new artistic talent can still be experienced today. Cetinje truly is the cradle of Montenegrin art and culture, and secretly that one destination that I had been looking for all along.
To-See / To-Do ​
Lovćen National Park

Mentioned repeatedly in this article: The Lovćen National Park is the natural element that makes this area so special and embellishes it with character. In fact, it was Mount Lovćen which gave the country its name: Monte Negro, Crna Gora… Black Mountain. Rising abruptly out of the Adriatic Sea, it’s subject to two different climates it itself created by separating the sea and mainland with its barren, rocky slopes. Even though looking up at this steep beast of a mountain can be rather intimidating, the top can be conveniently climbed by means of an extensive trail network creeping up from all sides. As Lovćen is tucked in between Kotor Bay on one angle and Cetinje on the other, you can use both areas as a base of exploration. That said, I personally recommend Kotor Bay, as the trails start right from the shoreline where you’ll also be staying. In Cetinje it entails an extra 5km walk along an uninteresting highway (each way!) to reach the closest trail that only permits you to explore the lower area of the park (unless you have plenty of daylight and don’t shy away from a 40km-hike).

On the Jezerski peak you’ll find the Mausoleum of Petar II Petrović Njegoš. It’s the world’s highest mausoleum and a remnant of its own turbulent history. It was upon Njegoš personal request that he was buried on this exact location. He even oversaw the construction of the chapel in advance. He died in 1851, after which his remains were transferred to Mount Lovćen in 1855, where they remained until 1916. What happened? When Montenegro was occupied by the Austro-Hungarian Empire during WWI, a monument in honor of Franz Joseph was erected on the exact same mountain. As this was quite the insult to the South Slavic national pride, Njegoš’ corpse was moved to Cetinje. After WWI the chapel was so damaged, the reburial location was a great topic of political debate. Montenegrins favoured a restoration of the original chapel, while the authorities of the Kingdom of Yugoslavia opened a competition for a new designed mausoleum. The lack of funds worked in Montenegro’s favor and a reconstruction took place, but after WWII an entirely new mausoleum was designed by Ivan Meštrović, said to remove all Byzantine / Serbian elements.
Not much of a hiker? The entire Lovćen National Park area can also comfortably be explored by car, as the asphalt roads are in great condition here. Convenient, as it allows you to see the entire stretch in just one day and hop from one spectacular viewpoint to the other. It’s the cheapest option besides walking, as even though there are public buses and ferries (be it infrequent) along the Kotor coastline and towards Cetinje, there is absolutely nothing going up to Lovćen National Park, besides expensive tour packages. Personally, I had a good experience with Drive Montenegro, who provided a budget-friendly car to not only explore this area, but also the more remote, breath-taking areas of Montenegro yet to be discovered by mass tourism. 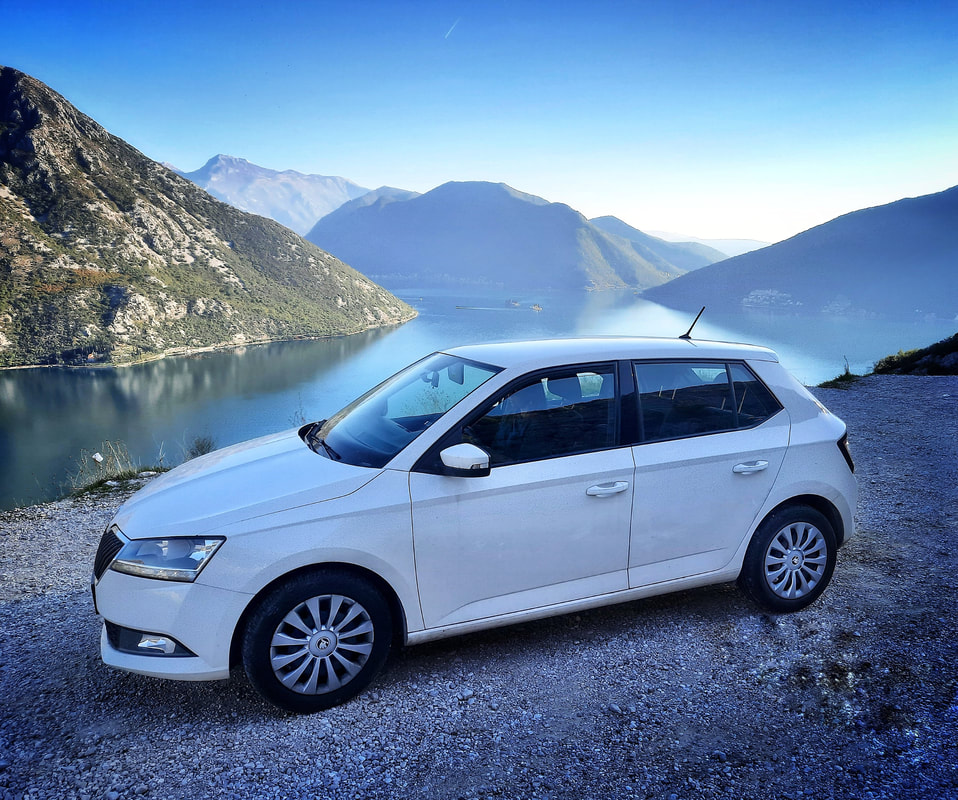