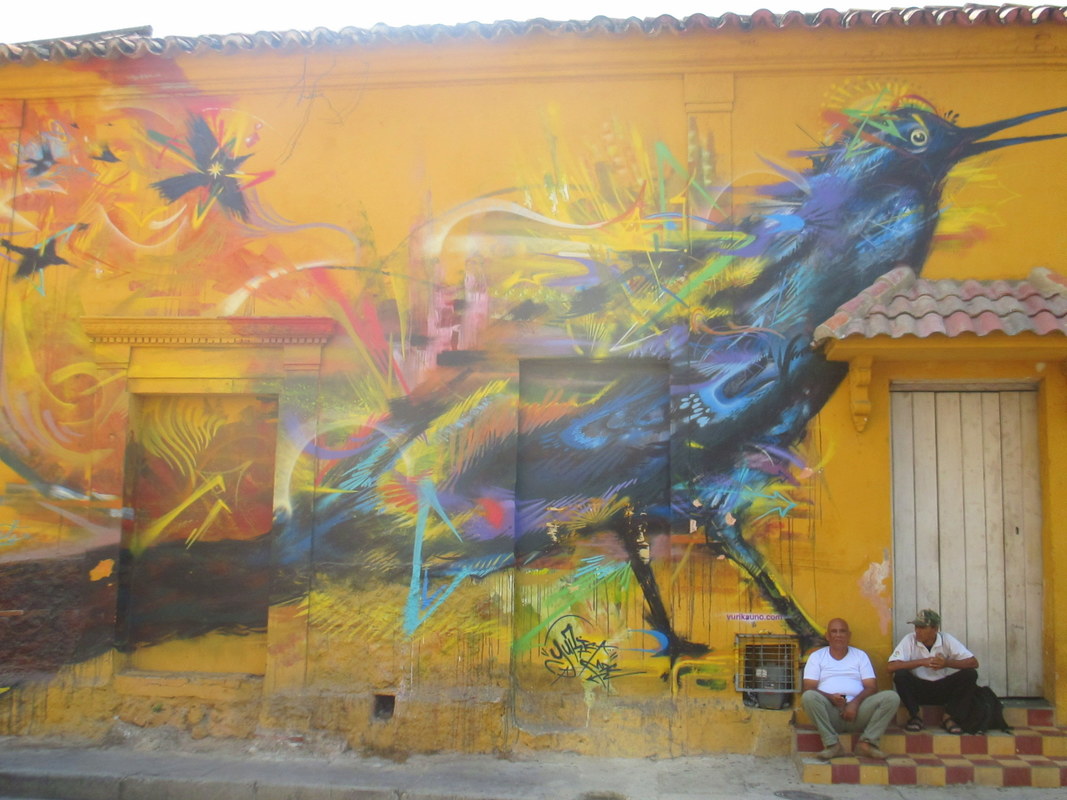 In Palomino I ended up hanging out with a homeless Peruvian world citizen who told me about some free concert in Barranquilla he would be hitchhiking to... Did I ever hear of ehm, Manu Chau?
​
ARE YOU F%&! KIDDING ME ?!? I’ve been waiting for an opportunity to see this swinging legend live for years now.
​Although I intended to go to Cartagena I decided Barranquilla was on the way. I immediately changed all my ‘plans’ as far as I had some and made my way back to the city where I left some carnaval-memories. After the old-but-young-hearted artist and marionette theater actor Jaime entertained me the entire bus ride, Couchsurfer Ux picked me up from the bus stop and led me to his small but cozy home in the working class neighbourhood where he lived with his mother. 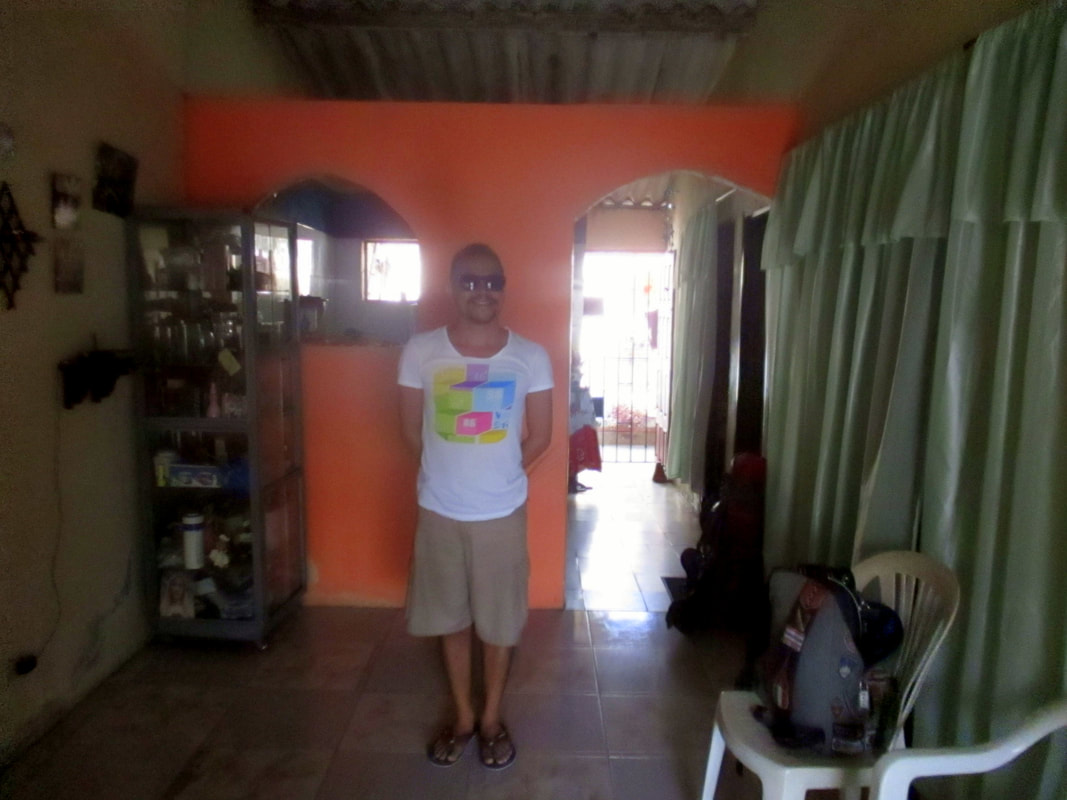 ​It didn’t matter that the festival started at Colombian time (about 4 hours too late) as this gap was easily filled up with some Colombian talk: politics, history, metal music, indigenous tribes, new ideas for the world economy... Ux and I seemed to have an invisible line connecting our brains, interchanging corresponding ideas and world perspectives. Before the big Manu made his entrance, a wide range of his ‘guest-musicians’ warmed up the crowd, demanding high flexibility in taste of music: from cumbia to indie, and from sax-sessions to punkrock. Many musicians I hung out with told me South America is their favourite continent when it comes to touring, simply because the audience goes NUTS and overwhelms them with a hysterical, irrational enthusiasm that can’t be levelled anywhere else. Also this time the audience didn’t disappoint. The festival area, clearly marked by a marihuana fumes atmosphere, turned into a gaga madhouse of jumping lunatics, screaming along with every single word... well, every single guitar solo from the top of their lungs. The happy tunes of Manu Chau even initiated a continuous moshpit of raving, crowdsurfing and headbanging fanatics. After the show, and after Manu ‘came back for more’ 4 (!) times, Ux told me he cried out of happiness.
As this enthusiasm is contagious I also danced liked my life depended on it... which resulted in a feeling like my feet just fell off and I was now stepping around on 2 bleeding stubs. However, when I woke up in my private bedroom and a breakfast of papaya, buñuelo and tinto was served by a heart-warming Colombian mum all physical discomforts were instantly forgotten.
​
I looked at my phone and read a message from my Cartagena-Couchsurfer Sebastián: “Hurry up, I want to take you to my mangroves tour at midday... NOT Colombian time”. So Ux leaded me to some dodgy bus stop under a bridge, hugged me goodbye and thanked me for appearing in his life.
And then, in the sudden tranquillity under the zooming air-conditioning of the minivan, it hit me:

The majority of the people in this world are genuinely good and honest human-beings with the best intentions, just not too many of us go out there to discover this.

Instead, they tend to focus on the minority that screwed it up and therefore appear in the news, and let their world perspective be polluted this way. 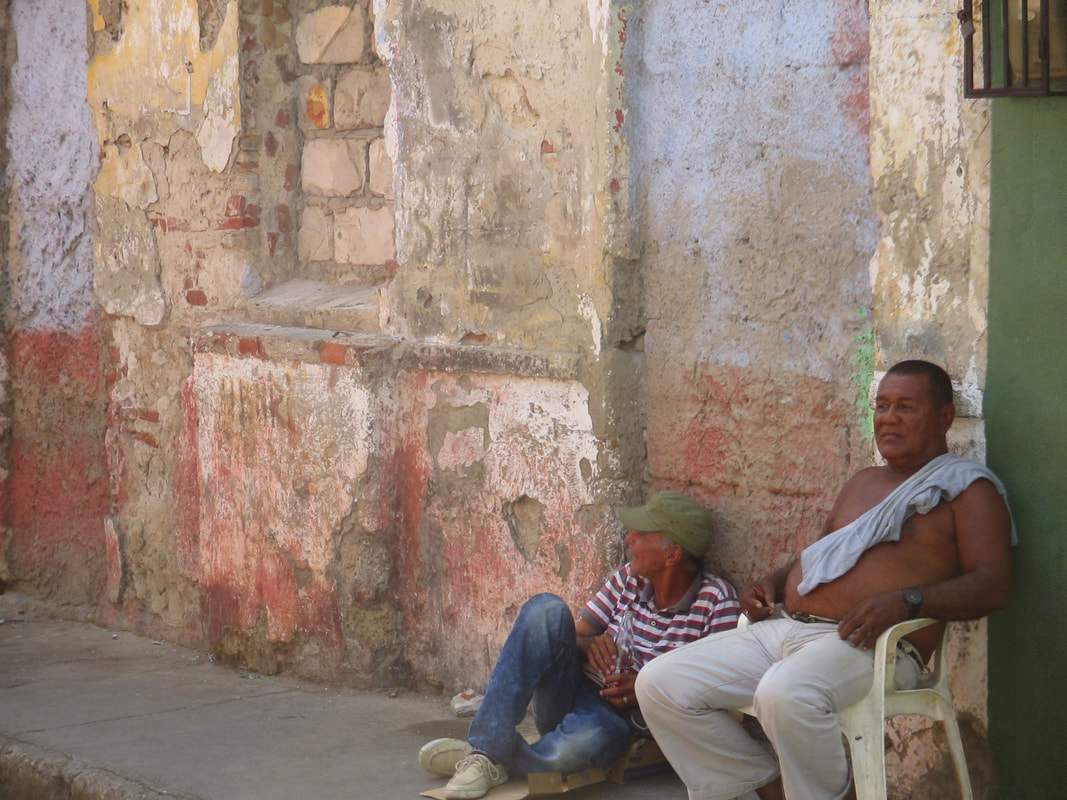 Although at home some friends used to give me an earlier arrival time for parties and meetings so I would actually be there at the same time as them, in South American terms I’m quite punctual. Public transport however means you are dependent on the public, which is in this case South American: I was 3 hours late, quite an achievement for a 2-hour trip. Add up that Cartagena thinks it’s fun to give every street 2 different names so that even Google Maps doesn’t know what the hell is going on and you could find me frantically roaming the streets for over an hour with all my luggage while a 40-degrees-UV-strength roasted my face. In short, I missed the tour.
​
Luckily, as my host and excellent tour guide Sebastián just started his business he was more than eager to take me for free on all the tours he had customers for. In the week I ended up staying in Cartagena I got to experience the historical city tour and the street food tour. The former being an informative and highly interesting stroll through the atmospheric streets of this colonial city.
​While Sebas put my head full with info about the colonial times and the liberators, I gaped at the cute alleys with tourists crawling around under the hundreds of flowers hanging from the colourful balconies. Yes, this place is a tourist trap with a capital T, but if that’s your reason to skip Cartagena on you Colombia-trip you will do yourself short. This is also what P. Escobar and his fellow-drug lords thought: While the rest of the country was destroyed by gunfights and car bombs, they kept Cartagena intact as their favourite holiday retreat... and therefore, it still is. 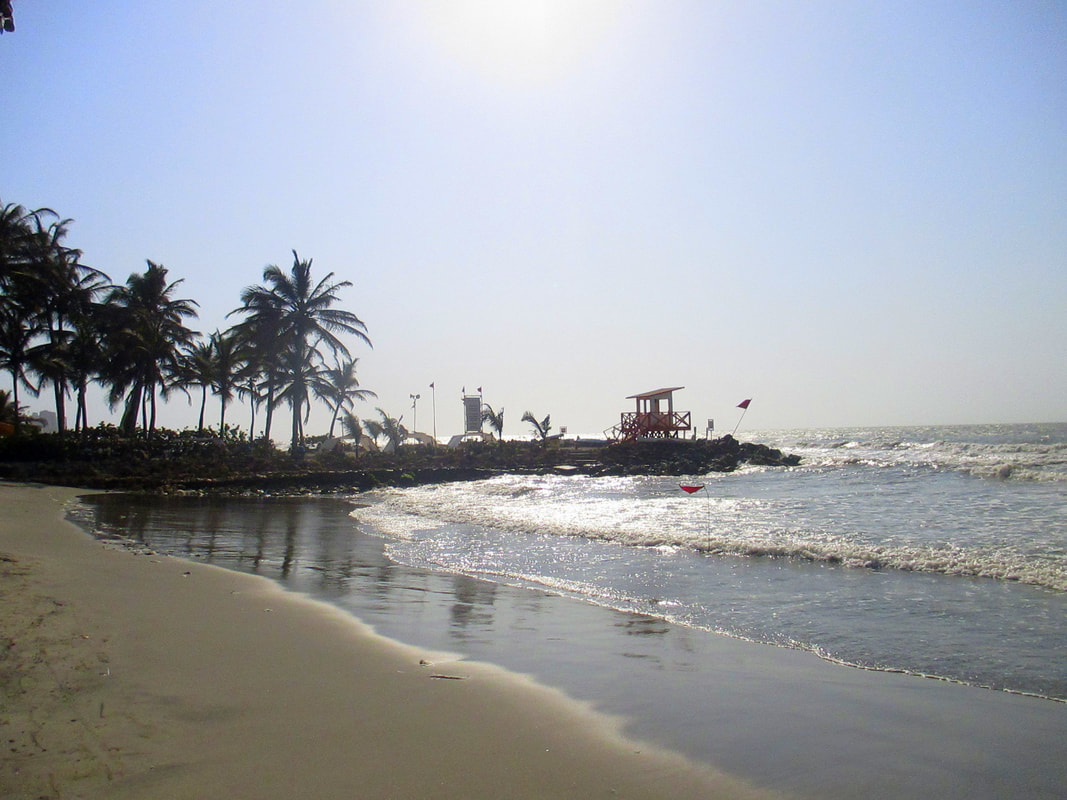 During the food tour we swapped these heavy subjects for something that’s heavier on the stomach: Colombian food. Since my arrival I have been loving and hating the fattening cuisine of this nation, so I considered this tour as my last tribute before making my way to Central America. We downed patacón (deep-fried plantain) with cheese (ok, not sublime Dutch cheese, but still cheese), arepa con huevo (fried to shit corn pastry with egg, meat & sauce), chicharon con yucca (deep-fried pork belly-fat with cassava), arepa con queso (fried mixture of cheese, corn and butter), arepa con chocolo (my favourite: Corn pancake filled with melted cheese), queso costeña con guava (cheese of the coast with teeth-rottening pieces of sugar), mora/guayaba popsicles and to pretend we’re being healthy: a granadilla (local fruit). In my defence: In these 3 months in Colombia I managed NOT to eat the bandeja paisa (meat layered with sauce with meat with sauce with meat etc... about 2500kcal per portion), so I was entitled to this calorie splurge.*
​
* Pre-vegan era, if that wasn’t obvious yet
​By myself I discovered all other parts of the city I found interesting. As always, the first place I ran to was the Museo de Arte Moderno. Although this gallery was rated quite low on TripAdvisor, I absolutely adored it. This either means that the average visitor doesn’t know anything about art or I have bad taste. Google painter Enrique Grau (good stuff!) and judge for yourself.
An absolute highlight is the high amount of street artists manifesting their talent: From a Caribbean dance with bums moving faster than I can move my index finger, to a passionate transgender guitar player filling the square with the sensitive sounds of her weeping instrument. There are other museums to visit, like the Gold Museum which I skipped because I saw the biggest one of the country in Bogotá and was fairly unimpressed, and the Inquisition Museum which I skipped as well due to the outrageous admission price.  I rather spend that money on drinks in the feel-good Cartagenean nightlife!
I subsequently headed to the Manga area to check out an exposition I couldn’t find and visit the harbour. I played with the thought to sail to Panama via the scenic San Blas islands, a new favourite on the backpack-track. However, the $500-600 price tag was something I felt needed some negotiation. “Impossible!”, screamed Sebastián, “You are not allowed in the harbour unless you have a ticket.” I don’t know why, but every time someone drops the word ‘impossible’ it seems like a nice thing to try. So with an elegant swing I loosened my hair and waited for the first captain to come my way. Within an average 5 seconds I was invited into the harbour and found myself sitting in a rubber boat to check out some ships. Once seated on the ship with a free cocktail I decided it was negotiation time, so I took off my sunglasses to exploit my blue eyes: Latino men tend to get lost in them and agree to more than they intended... if you realize that, why not use it? In no-time I got 50% off if I helped cooking dinner on the ship. However, Panamá knows how to squeeze cash out of their (mostly American) visitors and charges a $100-entrance-fee via San Blas, whereas it's $0 via airplane or ferry. Also, the heavy wind tormenting the country this season made the 20 hours in the open sea to reach San Blas sound less attractive... so I decided to do an overnight trip from Panama City and spare some pesos.

One excursion worth splurging for however was our overnight party-trip to Tierra Bomba. This almost deserted sand island on the opposite side of Cartagena was inhabited by about 5 people, some chickens and the young backpackers-crowd of the only beach hostel. Don’t expect to hike, surf or dive here... just sit back, order a cocktail and stand up sometimes to move to the music. Il dolce far niente with a tad of extreme party flavour.
It was time to go.

Time slips out of your hands too easily in a country like Colombia.

After almost 3 months in this country I came under its spell. It almost physically hurt to cross the border... but 1 thing is certain: I’ll be back in South America!*

* And I most certainly would be, quicker than I thought, crazy little thing called love... another 1,5 years I would spend here, re-visiting Argentina, Chile, Bolivia, Paraguay, Uruguay and Brazil and visiting every patch of those countries I left out the first time. 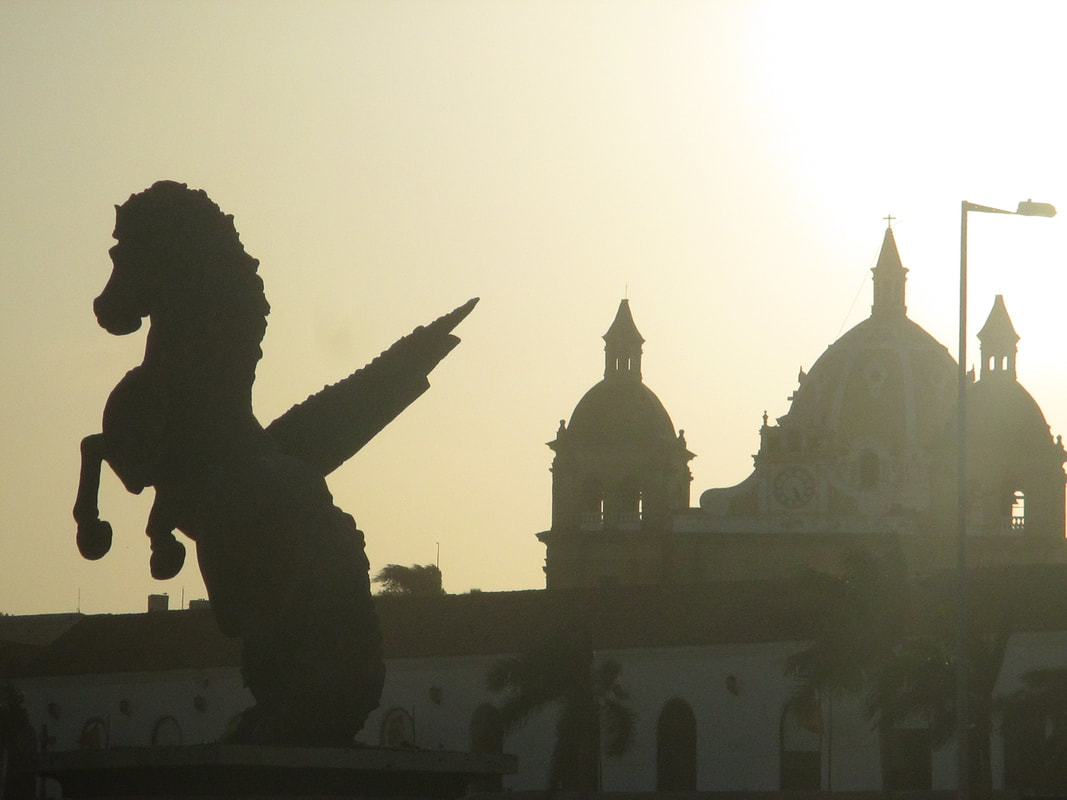 Did you know that...
​
... an earthquake (6.2 Richter scale) hit Colombia when I was in Cartagena. I worried it was the hangover when all of a sudden everything started moving around me... until I discovered that also the furniture was rocking around the living room.
... hairdressers should be avoided at any cost here. I thought €2 for a haircut was quite a bargain.  However, considering I paid someone to completely screw up my brown locks it’s not such a great deal.
... women are the prettiest in Cali, where the plastic-ass-density is the highest. Funnily enough, men are the ugliest in this city. The most gorgeous guys can be tracked down in Bogotá. Curvy women can be found in the south, they get skinnier (and less plastic) further up the northern coast: Pick your type and plan your trip around it, I suggest.
... as a pedestrian you don’t have any rights. You can never cross the street if there’s a car anywhere in your sight. Green traffic lights are just decoration. Forget about traffic rules, they’re not meant for you. No law will protect you. If a car hits you when racing around the corner with 60km/h, it’s your fault.
... my whole family was paranoid about me being in cocaine-nation Colombia. In fact, in no other South American country I felt safer, more protected and welcome as here. 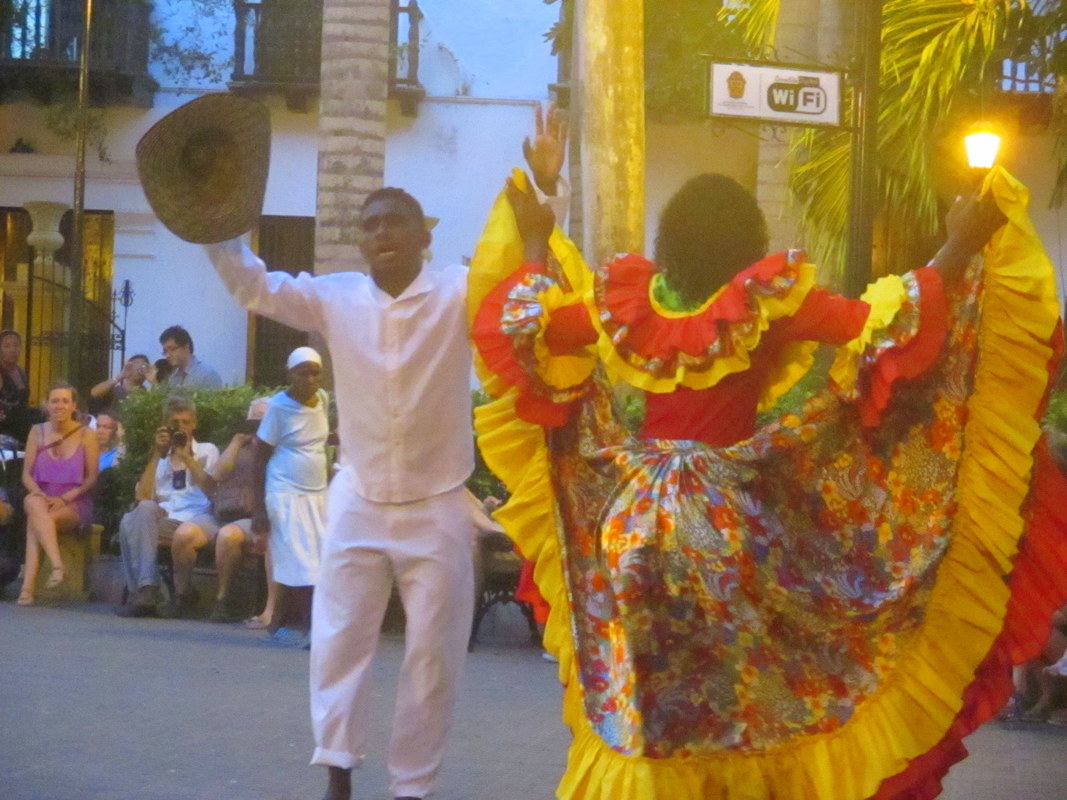