Download File
An edited version of this post can be found on STEEMIT: Upvote me to support my travels for free!
​
Self-high-five, I managed to get back on the Ruta 40!

Not only the Patagonian part from Bariloche to Ushuaia which recently did is enough to wipe you off your feet and lift you up to heaven and back again, the northern stretch has certainly a lot to offer for the aesthetic-driven vagabonds among us (which includes myself). So there I stood on this iconic highway, with my improvised carton that sloppily had ‘Cachi’ written onto it. 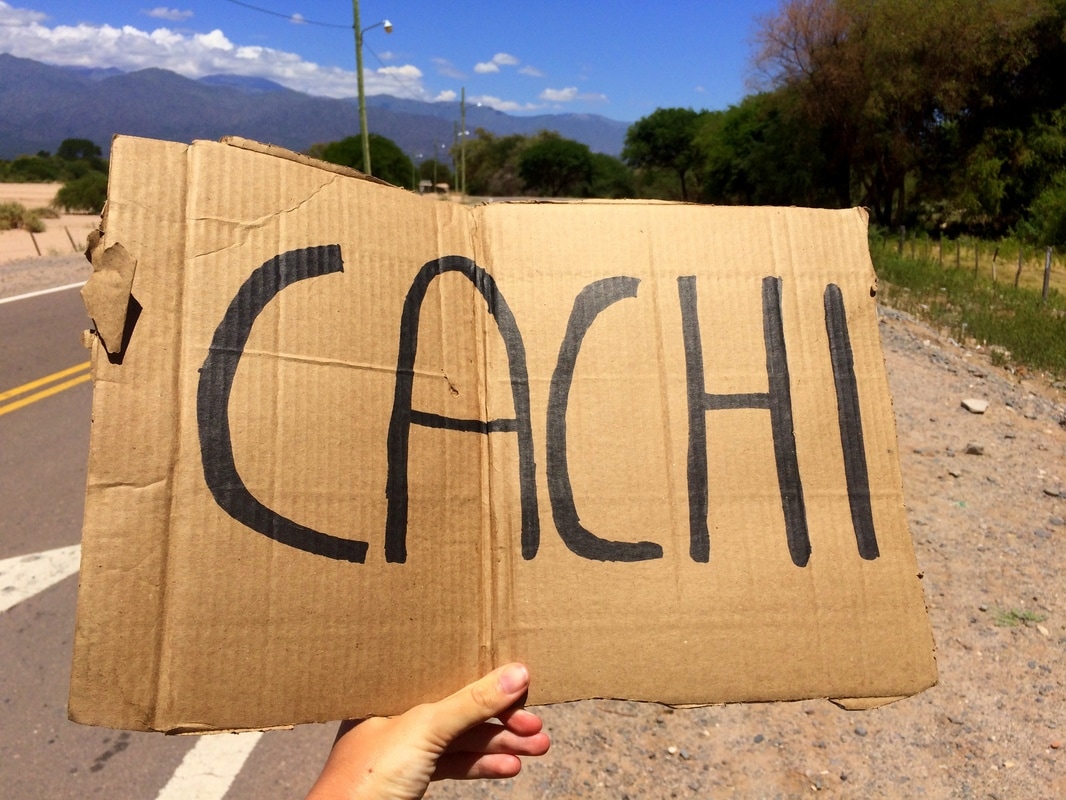 It took mere seconds for a car to stop and drop me off at the next town, San Carlos… but from there, well, it kind of stopped. Besides honking scooters and the occasional horse and carriage not much seemed to head north on this rough dirt road… I pondered lying down in the shade of the only tree in a kilometer circumference, with a grass halm in my mouth watching the fata morgana damp arise from the smoldering asphalt tortured by Salta’s 48-degrees midday sun.

​Then, after 45 minutes, I saw a cloud of dust moving into my direction. This was gonna be my ride, I knew it! I was correct. With squeaking tires a car filled with three male holidaymakers came to a halt, the driver welcoming me with a half-liter-beer-can in his fist. He stopped because my eyes were not normal blue, but 3D-blue, he wisely explained… whatever the hell that means. I mounted the vehicle and watched the white powder on the floor… I decided that was sugar, even though they told me they didn’t sleep all night, I wanted that to be sugar. 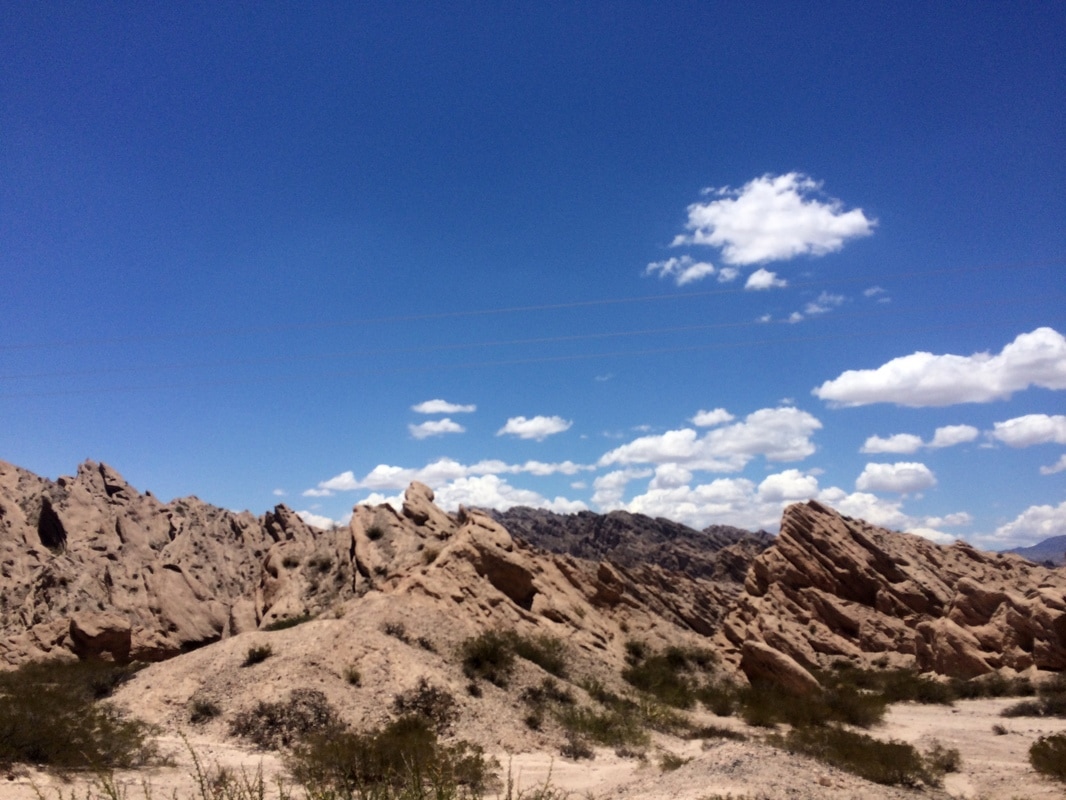 Not that you would need drugs to experience the true spirit of this scenery.

Let me put it this way: the route from Cafayate to Cachi is the exact reason why I travel and accept to be out of my comfort zone at all times.

This space on Earth is in one word immaculate. While the car slid passed bright rock formations looking like red eroded castles, only occasionally interrupted by hand-built adobe houses, I analyzed the contradictions. Contradictions not only in the almost unnatural-looking natural colors contrasting with the fluorescent blue of heaven, but also with the dryness of the mountains dotted with cactuses bordering a fertile green valley circling around a refreshing river. How did Pachamama pull this off? It’s both confusing and mesmerizing. This ride of a lifetime through the Chalchaquies Valley was one of the best things that happened to me in weeks, and in my case that really means something. Honestly, I didn’t even care about Cachi anymore after all of this, I was a satisfied soul. 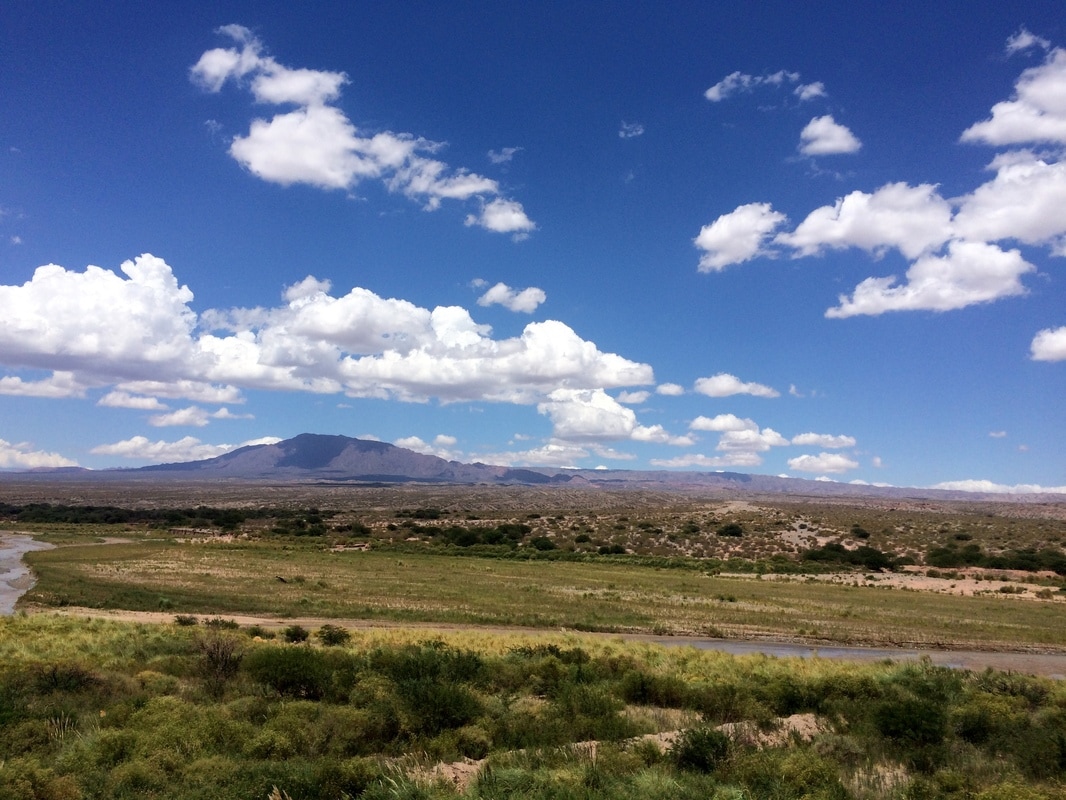 Luckily, it only got better. I planned to camp somewhere for $2 a night as some people I met on the road where staying at the local campsite, but an even more economical option blew my way. Rafael, the only Couchsurfer in town who didn’t have time for me, had time after all and spontaneously texted me when I was planning to visit his town. I was driving into it, as we speak… with my 3 new friends suffering developing drunkenness and self-inflicted insomnia, Rammstein’s only Spanish song “te quiero puta” pumping out of the open windows as one of the guys looking like Steve-O was hitting on me and decided to be a metalhead AND vegan on the spot (although his very next meal included eggs and cheese – oops, wrong lie to get laid). 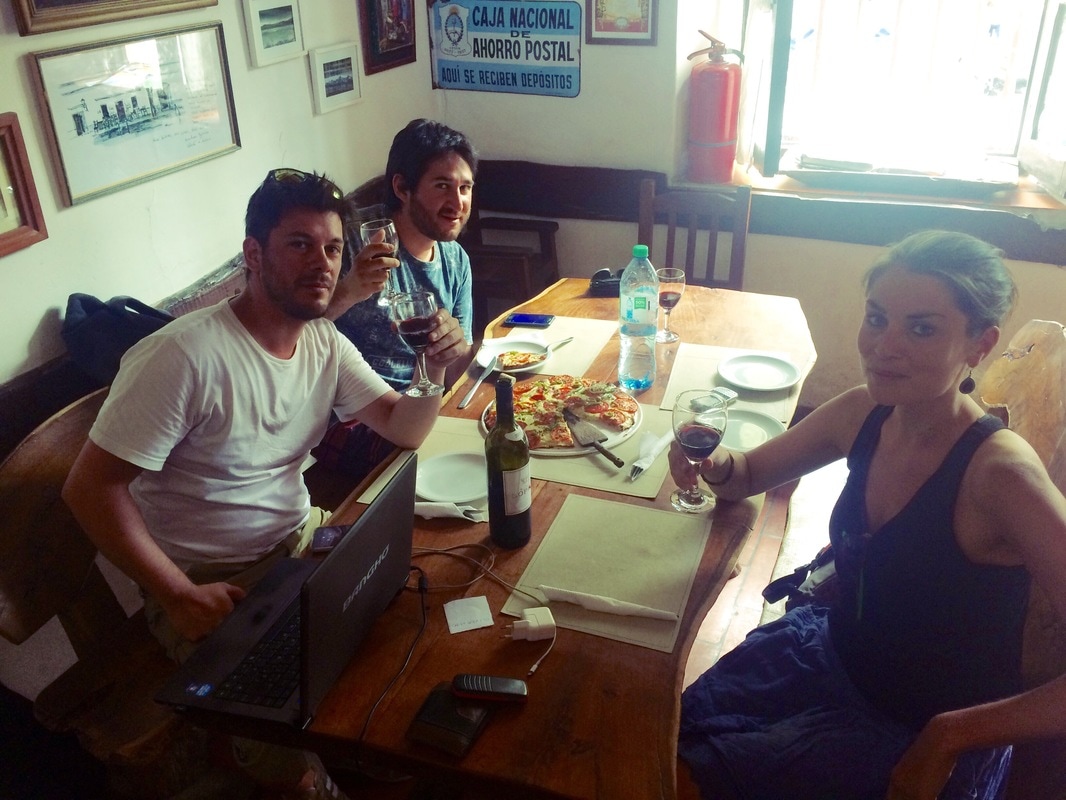 Rafael not only runs Cachi’s cultural and tourist center, he lives right into it. And therefore so was I, those days. An indigenous tour guide and one of the most knowledgeable people in town: I must conclude I hit the Couchsurf-jackpot once again. 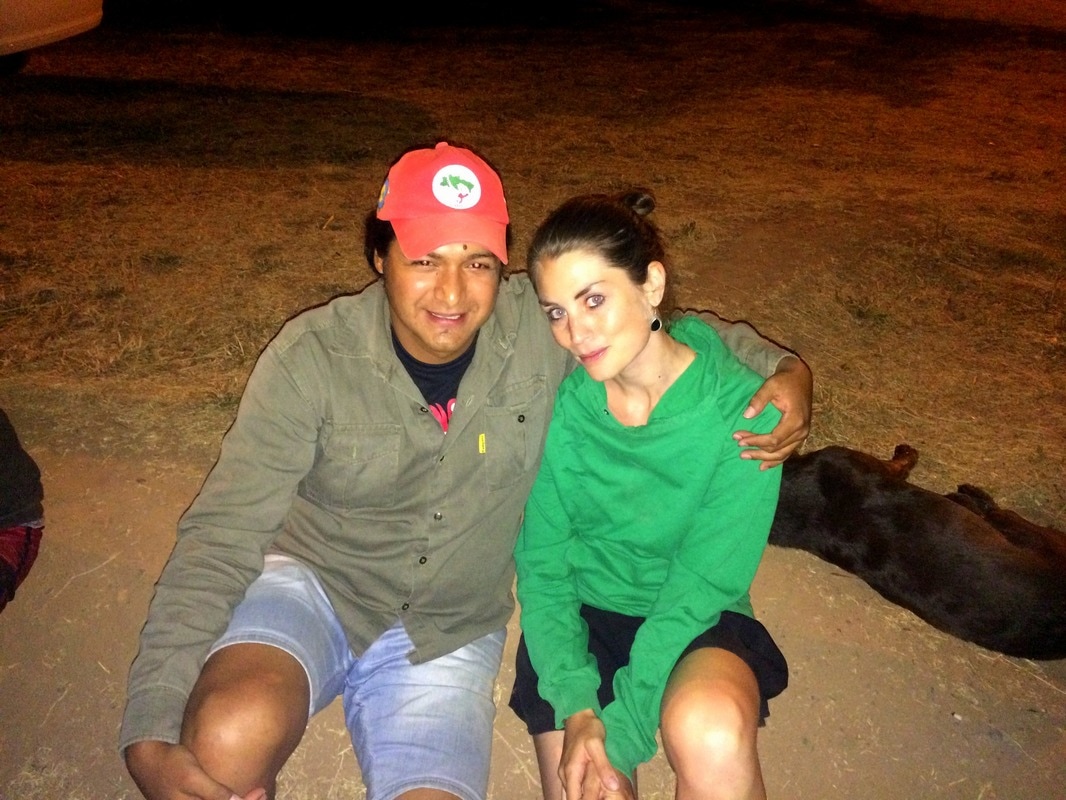 That asks for a celebration. With – oh my god guess it, nooooo you can’t it’s too good – home-made wine! Because THAT this man also does. My life is one big happy rollercoaster. I wasn’t even recovered from the liver-attack of wine region Cafayate, but who cares? I’m on a holiday, even though I’m hitting the tjree-year-mark soon. After we threw a bit of wine on the floor to sacrifice to Pachamama, Rafa, me, the three party-animals and a couple from La Plata I met in Amaicha raised our glass! To the Dutchie that brings all Argentineans together somehow. And to the aliens!
To the aliens? Oh right, you didn’t meet Antonio Zuleta yet, did you? Sorry for being rude, let me introduce you. In Cachi lives a chap called Antonio, a great fanatic of mountain-climbing. On one of his uphill journeys the good man was suddenly surrounded by a circus of bright lights, after which he woke up many days later without a single detail engraved in his memory. You know how Spiderman got bitten by this little insect and was suddenly in possession of all additional capacities? Well, Zuleta could all of a sudden communicate with aliens after this experience. Bullshit, you shout? You’re invited to come and visit him at his Ovnipuerto.

Yes that’s right, he built a giant alien gateway full of stars, moons and mystical messages to invite extraterrestrial activity onto our planet. An E.T. landing strip. He himself lives in a cave right under the platform.
​
Let him explain it to you in his own words:
Zuleta acquired an impressive amount of convincing proof in the meantime, giving him short bursts of national fame. Many documentaries paid attention to Zuleta and the many alien-observations in Cachi:
There’s even a movie made about him, Al Centro de la Tierra, if this aroused your interest.

Obviously, this was where I was headed at midnight. Show me some of the good stuff, Anthony! Nevertheless, this spiritual being was nowhere to be found… his cave full of faded papers full of star-sign-calculations only vaguely reminding of his presence. His gateway, however, was all ours.
And it has to be said, stuff happens up there. Yes, me, cynic #1, admits that some seriously freaky things are to be seen in these desolated skies hovering above Cachi. I kept on observing 3 bright points transforming into 1 dot and back again and colored lights rhythmically moving from left to right. And no, stop laughing, I know what a bloody satellite looks like. I’m not instantly converted, but at the same time I wondered how much proof I really need. It makes me uncomfortable thinking that there’s more than just us, but at the same time it seems selfish to think so. We’re such a tiny dot in the universe, in just our universe that is… would some retarded species that’s not only exploiting and killing all of its animals, but also their own people and the grounds they are living on up until its own destruction really be the only thing they could come up with? Of course not, I know what I saw that night in Cachi.
Wiser and also a little bit drunker we moved to the campsite, where many queer travelers where awaiting our arrival. City-children playing hippie for the summer, young kids with guitars and dreadlocks singing in circles about marihuana. An opportunity presented itself to let an entire campsite eat vegan to please some crazy Dutch chick with a freaky backpack, so of course I showed up. Polenta was on the menu, dinner served at 2:30AM. No worries, Rafa and I brought one of those five-liter wine bottles, one of the greatest inventions after penicillin. Also the hitchhike-guys joined in with a wide variety of music instruments, which meant the night was sang away with Spanish-spoken folklore… up until the point we had to hide into the forests as the police was chasing us for noise-nuisance. Just one of those nights you go home early… in the morning, that is.
And one of those mornings (/afternoons) that you wake up with the hangover of the century. Getting hammered after the age of 25 does have consequences… sadly. Maybe it’s life’s way of reminding you that this life phase comes with responsibilities, but up until now I have successfully been running away from those. Needless to say, I missed the excursion to some kind of archaeological site all tourists go to… analyzing bricks is just too much to ask when your  head can be considered a brick as well. In this state I felt more associated with the death, so I stumbled to the cemetery scenically located on the top of a hill caressing the skies. 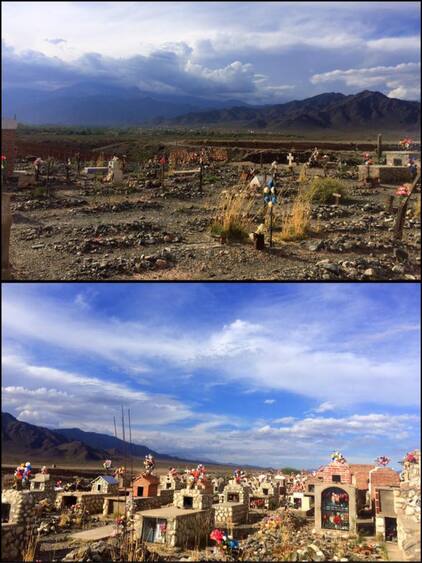 Exactly, why bury the death deep in the dirt if they’re supposedly heading to heaven, that’s quite the detour if you ask me. It’s interesting to see how we allow money to even put a mark on the people no longer among us, richly decorated tombs sharply contrasting with graves marked by crosses nailed together with two broken branches, covered with dirty stones and plastic flowers in cut open coca cola bottles. Well, that’s why you work your ass off your whole life without truly living: to show off your filthy rich corpse! Have fun with that, two broken branches for me please. Staring at the paralyzing hill-sights I realized how life (and death) amidst absolutely nothing never fails to impress me. As good as Cachi looks when standing right into it, as beautiful it is from a distance. 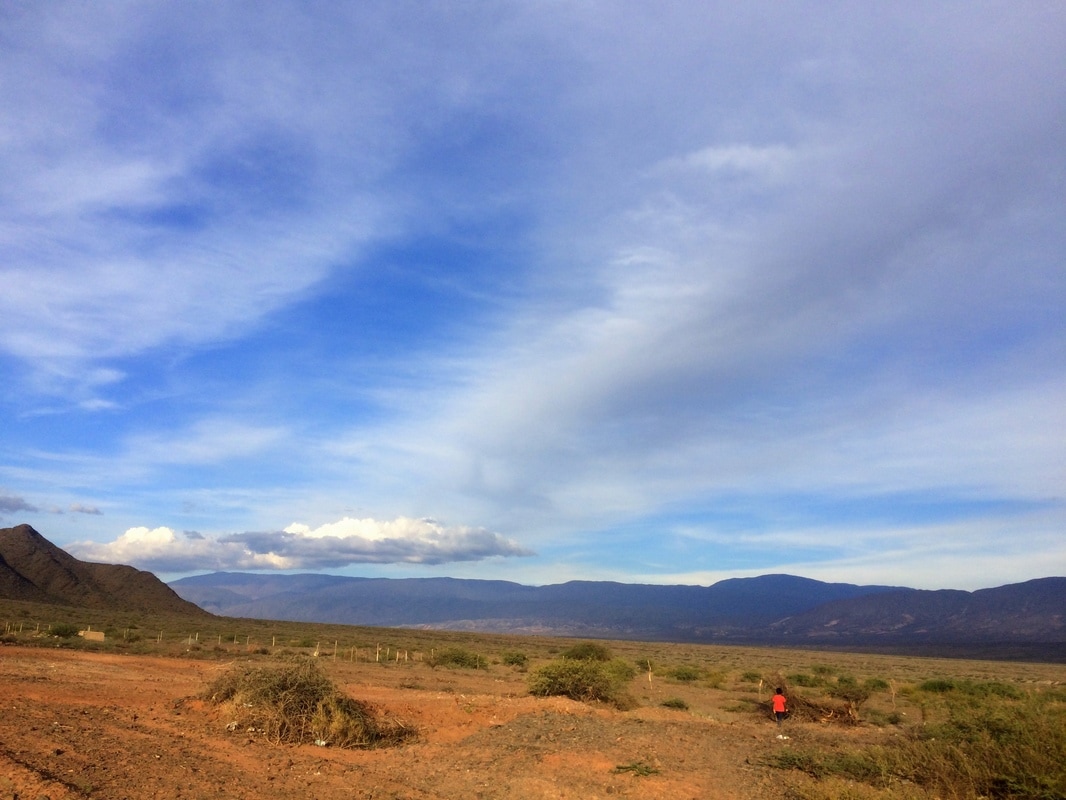 Slowly I moved out of town… an unknown force drew me back to the alien gateway. Zigzagging through fields of cactuses and endless sights over faded colored landscapes I decided I needed to see this unusual place at daylight. Standing in the middle of the starred circle surrounded by triangles and stellar signals an undefined feeling took over. Where is this man? I descended into his deserted cave but felt I was watched. Maybe I was. Maybe he disappeared… maybe I will soon too, an ice cold inner voice whispered into my consciousness. I quickly ran out and moved away, following the never-ending road swallowed by the surrounding mountains, revealing Cachi in the end. 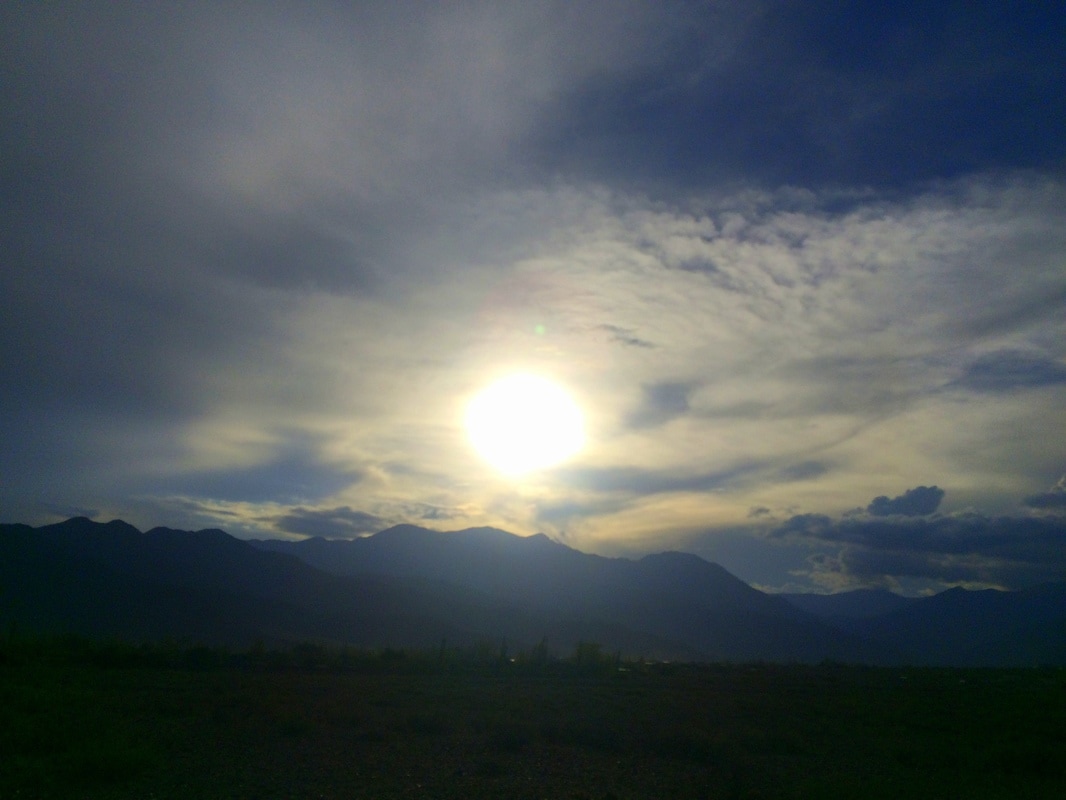 I will never reveal all the secrets of this place. I would never want to.

The mystery keeps it an unfinished chapter wandering in my memory, forever intriguing and longing for more.
In order to support the travelers’ community, I spend many hours per week to adequately document all information and advices for prospective visitors, accompanied by a (hopefully) entertaining insight into my personal observations and experiences. This service is and will remain free. However, if you voluntarily want to make a contribution and support my travels and thus the creation of new stories and information supply, here is the button you’re looking for:
Donate
​Related:
- Go to the Argentina Page for more blogs and hitchhike adventures!
- Check out Budget Bucket List's FAVORITE HIKING DESTINATIONS worldwide!
- Europe's best skiing & hiking: Get your ass over to jaw-dropping Switzerland!