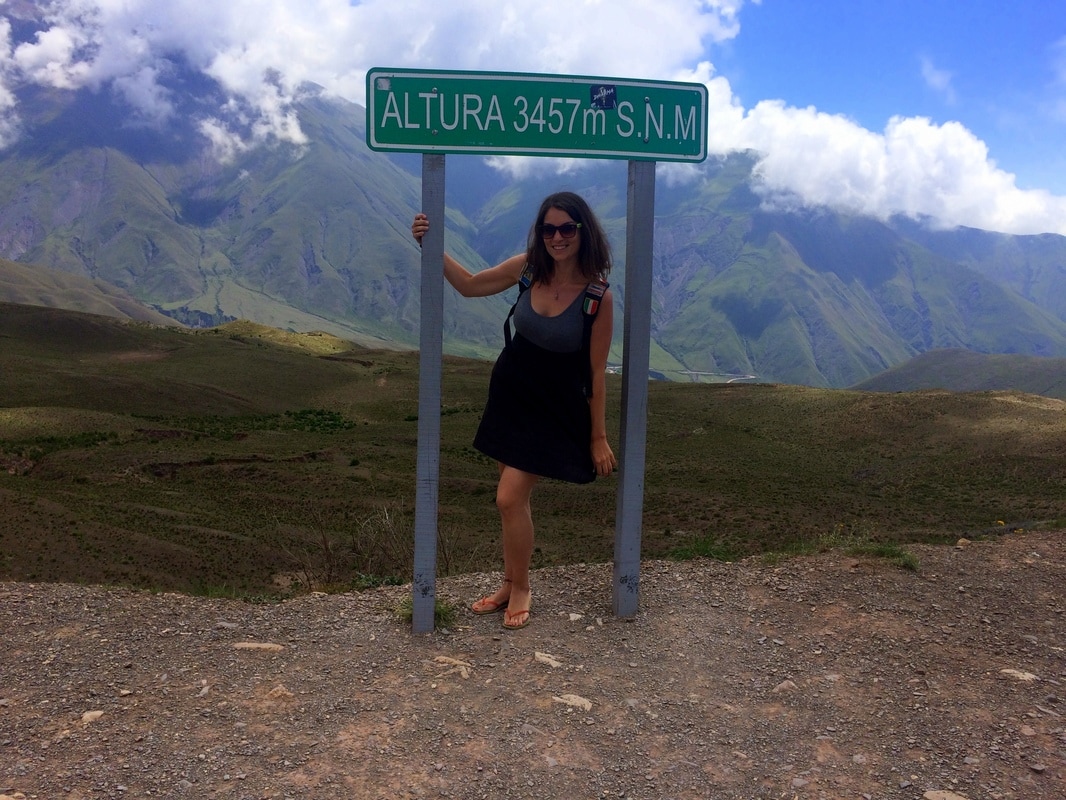 Truth told, I had to walk quite a bit out of town to avoid circulating traffic, but from there a fresh young couple with a little kid immediately gave me a ride to the next town where the crossing to Salta can be found, a road hidden from Google Maps that already saved me three hours travel time… it’s a start! There I met a hitchhiking duo that with a faded smile told me they had been trying to fetch a ride for over two hours now. Well… shit! According to the unwritten hitchhike-rules I wished them good luck and said I would walk to the next piece of shade to grant them the first opportunity. I never reached that shade though, while walking to that point the first car stopped and offered me a ride, while the other two were watching. Yeah… I’m sure they really hate me now, I would. But ehm, see you later ciaooo! 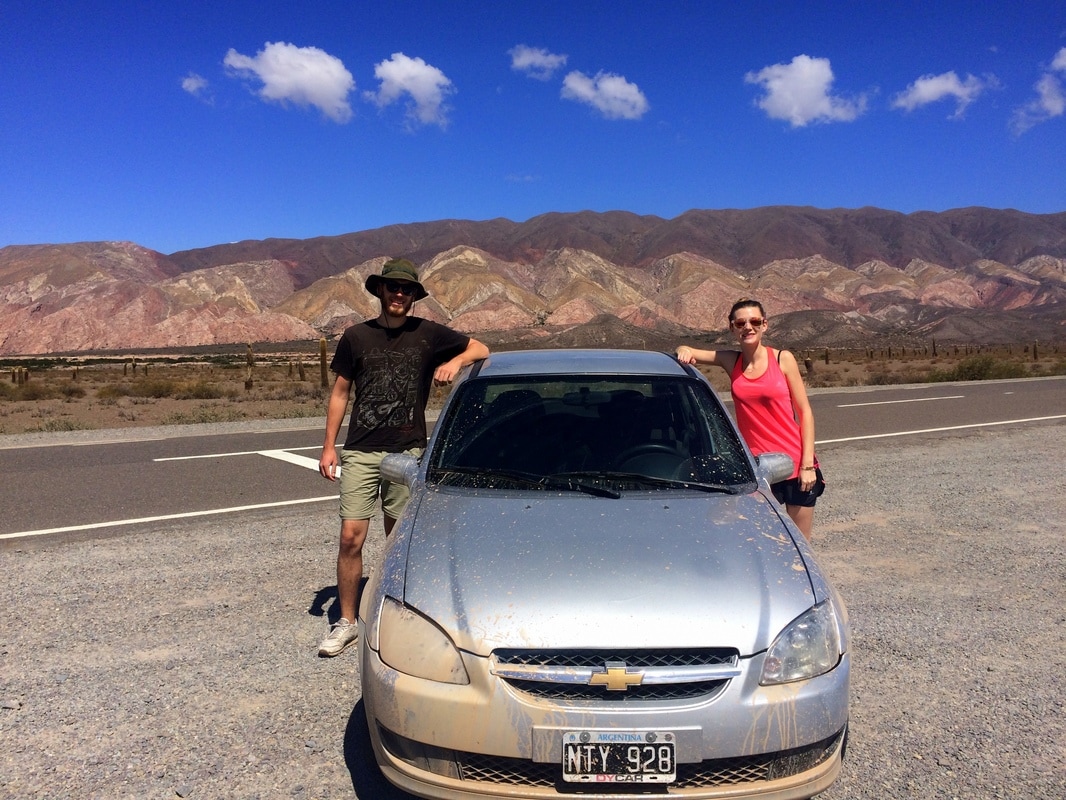 Two cute French lovers with a rented car were on their way to Chicoana, excited to drive the road cutting through Parque Nacional Los Cardones. Good news for me, because that meant they would stop at all look-out points and tourist sights. After all, I still fall in the ‘tourist category’, don’t I?

After a break at the endless dry fields of cactuses we drove up to Piedra del Molibo, a tiny church located  3,500m above sea level... or cutting-glass-with-nipple-level. A tanktop was certainly not sufficient, but the sights were for sure worth the trouble.
Subsequently we followed a swirling dirt road swaying through the mountains, the sharp curves and U-turns forcing me to pop some car sickness pills as puking all over their rental didn’t seem the best way of saying “thanks for giving me a ride”.

Yes that’s right, I’m an ever-traveling nomad with car sickness. How ironical. Just like I am a fauna-adoring vegan with an allergy for animal hairs.

​Pachamama for sure pulled a prank on me. It surprised me how the landscapes of drought transformed into fertile green valleys. Quebrada de Escoipe gives a refreshing perspective on the quickly changing faces of nature. 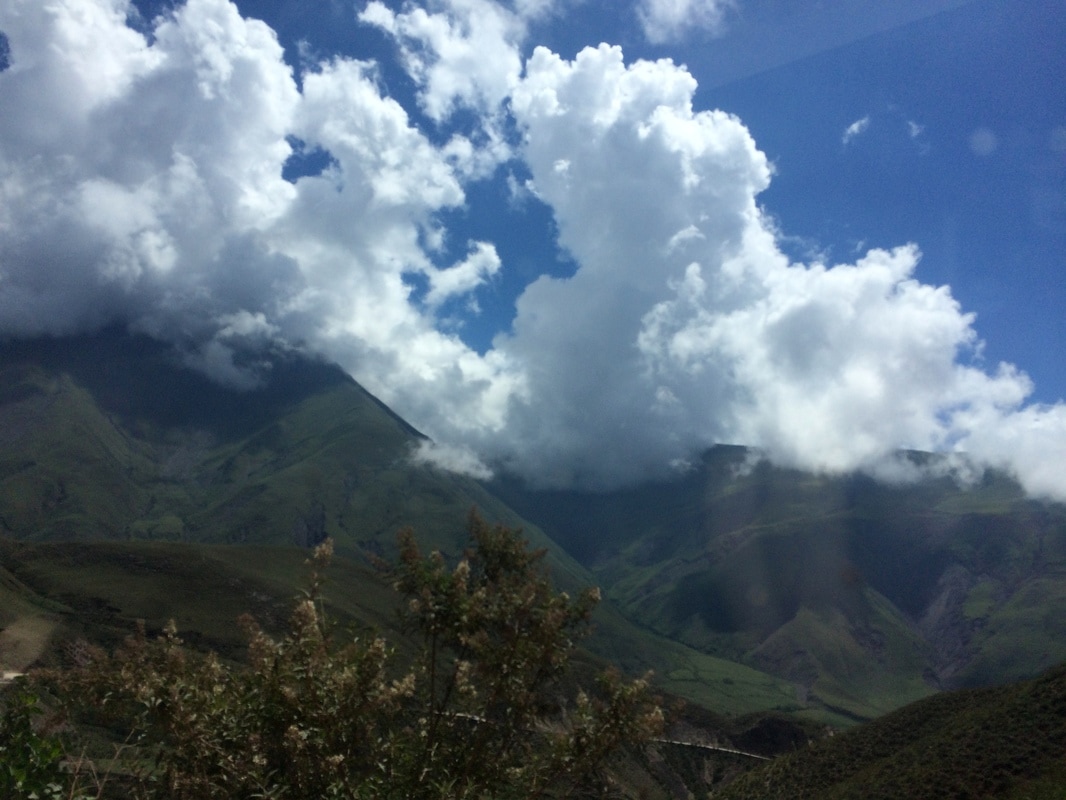 A dream ride for sure, but my body wasn’t happy. Once the Frenchies dropped me off I waved until they were out of sight, the exact second they disappeared around the corner vomiting in full force behind a traffic sign. Alright, ready for ride #3!
​
It seemed a splendid idea to walk to the next crossing, as from there all traffic went to Salta. I just forgot I’m slightly retarded when it comes to reading maps and estimating distances… which resulted in me walking to the next village El Carril… 7.4 KM away… on flip-flops… backpacked on the back and front… without the slightest slice of shade… on the hottest peak of the day. Clever! With the skin peeling of my nose and swimming in my own sweat I pulled up my thumb again, realizing I would never have stopped for the creature that I saw in the mirror at that moment. However, some people surprisingly did: a car full of senior holidaymakers dropped me off right at the doorstep of Couchsurfer Juan* (pseudonym).
Once I entered his house I tried to get the conversation started with an “oh I see you just moved in, everything is under construction?” opener. Well, he didn’t, he lived there since two years, this is just what his house looked like. Ouch. This awkwardness kind of set the tone for the rest of our time spent together, Juan struggling to socially adapt to other human-beings. Why is he part of the Couchurf-network then, you wonder? Like many men, to easily meet exotic foreign women. In this case he found the apple of his eye in the other French girl staying there simultaneously, making me feel at all times like the third wheel. I was the absolute personification of irrelevant. He had an interesting way of expressing his affection though, telling his prospective sweetheart all people from her country stink… but that’s oke, they can’t help it, they’re born with that terrifying smell. Riiiiiiight!  ​

In my case I could only endure the malicious jokes about veganism (I’m very sorry for not killing animals) and that plants-have-feelings-too-bullcrap or you-know-how-polluting-soy-production-is-rubbish some carnivores pull off (So what does your food eat then? Right, more plants and soy in one day then a vegan in a month, so you’re still better of being vegan if that’s your argument – not to mention the thousands acres of forest being destroyed to raise and feed livestock for the meat and dairy industry, ok drifting off) for a limited amount of time. And when I saw him touching my freshly washed underwear drying in Salta’s powerful sun while remarking the sexiness, I decided it was time to go.
​
To where? To my new friends Emiliano and Xiomara of course, famous from my adventures in Cafayate. 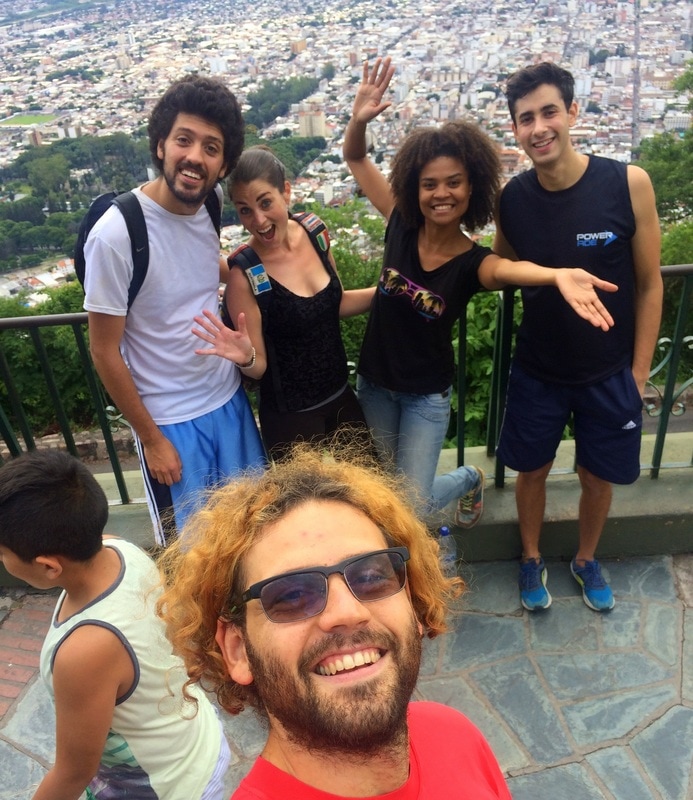 I love it how the puzzle of life fits so perfectly sometimes.

Because of their all-round awesomeness I stayed in touch with this entertaining duo I met climbing some waterfalls… and Emiliano, being an official (loud & proud) Salteño PLUS *drumroll* vegan, invited me to eat in Salta’s most famous plant-based restaurant together with his side-kick. As my Couchsurf host didn’t want to join because “he wasn’t going to pay money for that disgusting vegan shit” we had all the time in the world to plan how I was going to move in into their family apartment smack-bam in the center, bordering the main square.
Restaurant Chirimoya
​
But not before I finished my personal round of sight-seeing. What initially seemed to be ‘just another colonial town that looks exactly like Spain’ actually had some interesting surprises in store. You all know I’m not the most religious being Earth has ever known, but honestly, the excellent architecture and colorfulness of Salta’s churches made me a bit less sarcastic. At least the local spiritual leaders squeezed enough money out of the poor to hire some gifted artists. Especially the curtains cut out of marble at the St. Francis church were so ingeniously and realistically crafted I almost became a tad emotional (that’s right, marble curtains almost made me tear up, I don’t need much). 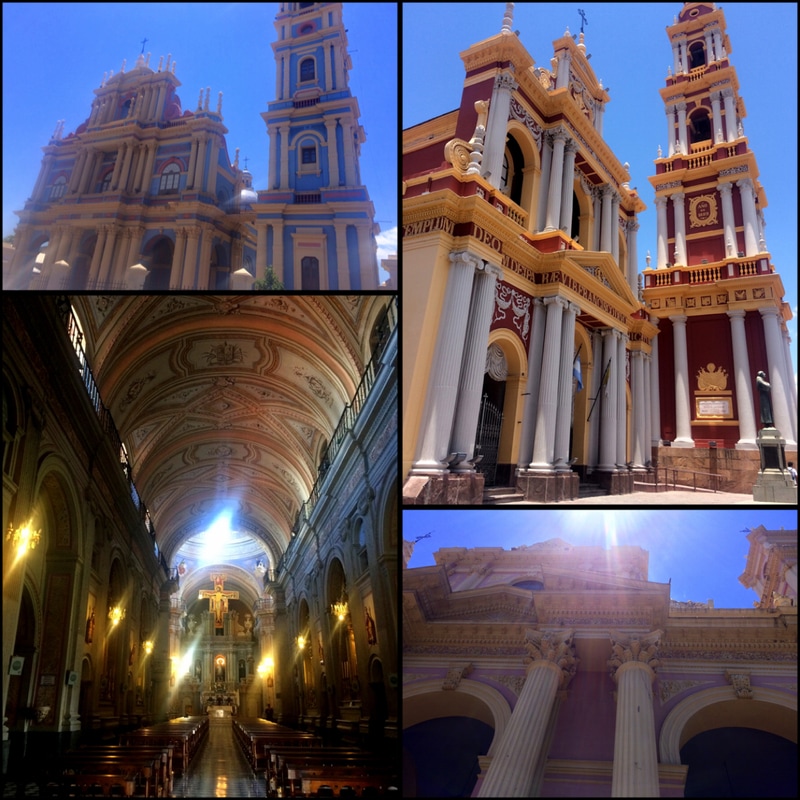 Also the museums weren’t to be ignored. For an art fanatic like me the Museo Provincial de Bellas Artes was the obvious first pick, which doesn’t even have an entrance price. This attractive museum is the home base of a thorough selection of excellent pieces, combined with some questionable ones… which made the good ones look even better. Especially making a photo of a photo of people making photos was a satisfying droste-effect that left me feeling unsettled for a while. Another superb feature: airconditioning, because man, Salta is hot.
The next one on the checklist was TripAdvisor-hit Museo Arqueología, or ‘MAAM’ for cool people like me. They dare to ask 100 pesos to foreigners, but it’s only 30 for fake students like me, which is acceptable. The museum focuses on the archeological findings of Inca origin in the province of Salta and mainly the nearby town of Volcán. The creepiest and therefore most interesting part is the exhibition of dead children, offered to soothe the gods. That day I learned that looking hot and being rich doesn’t always make life easier. Not if you’re Inca, that is. It were exactly the high-borns and physically most attractive kids that symbolically got married to unite tribes, to subsequently have a bit too much to drink to make the buried-alive-part easier.

​Well, if anyone calls you ugly in life, here you have your defense.

Source (taking pictures wasn’t allowed here)
I wasn’t done yet. Centro Cultural América next door had another craft collection of varying quality for those interested. That said, the stunning interior architecture is worth a shot. I decided to skip the Museo Cabildo as I tried the one in Buenos Aires with arguable success (read: I was so bored my brain just short-circuited) and this one didn’t look much more promising either. Also the Museo Pajcha was scratched off due to an entrance price I wasn’t willing to pay, which made me decide to just watch the folk dancing on Paseo de los Poetas. 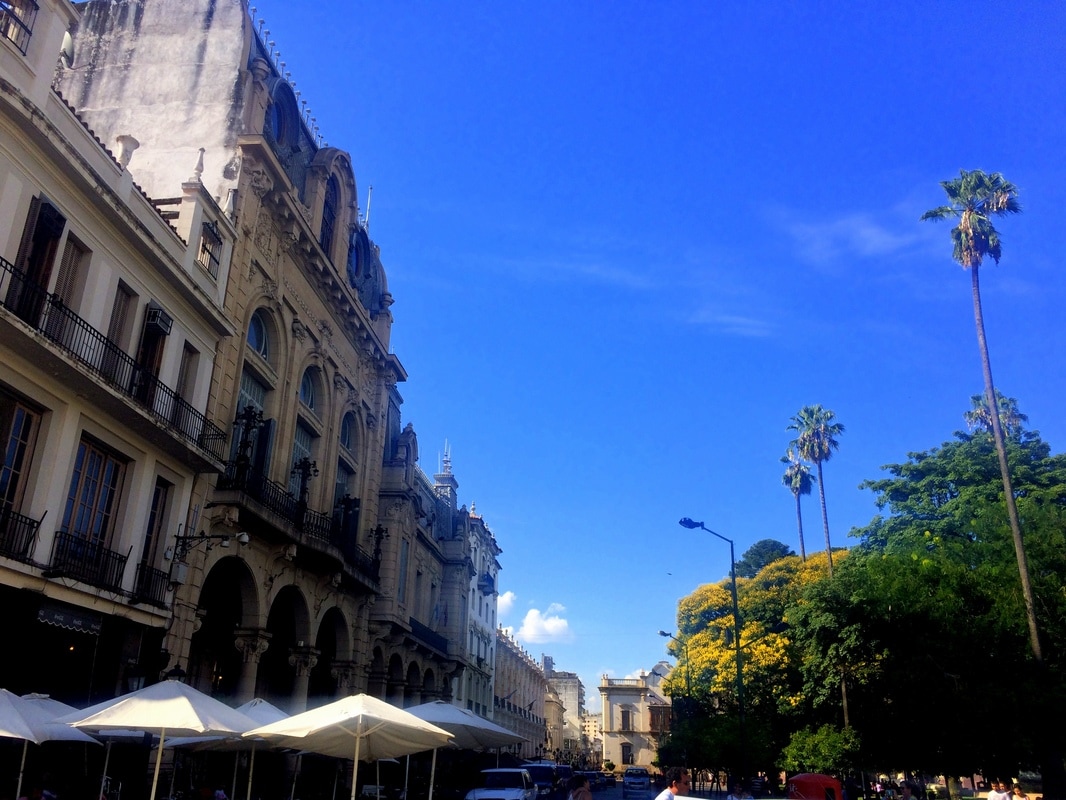 Done with the tourist part I felt ready to move in with the locals and follow the Salteño lifestyle for a few days. Which meant in this case: lots of Netflix and an endless variety in vegan meals… as not only Emi was vegan, but also his brother and his best friend. A vegan majority in Argentina, who would have thought? That said, spending time with pure Salteños also meant I had not one guide, but at least three of them, and they wanted me to experience their hometown from inside out… or from up high. Cerro San Bernardo offers a great opportunity for that, as after a steep little climb you’re treated with satisfying panoramas over this buzzing province capital. And if you don’t care about that you might want to go for the sweaty fitness-guys showing off their sixpacks, as for sure they love to have an audience.  ​
Interesting to see how the cityscape changed over time…
​
To conclude a successful chapter in this delightful town Emiliano took Xiomara and me to the Dique Cabra Coral, a place where locals go in the weekends to chill out and cool down from the devastating heat. We didn’t go where the ‘plebs’ went however, no, Emi knew a more desolate place 7km down the road… which we had to walk on our flip-flops as he forgot to mention we actually had to work out a bit to relax. But like all things you have to work for in life, also this one came with a reward. A breath-taking one.