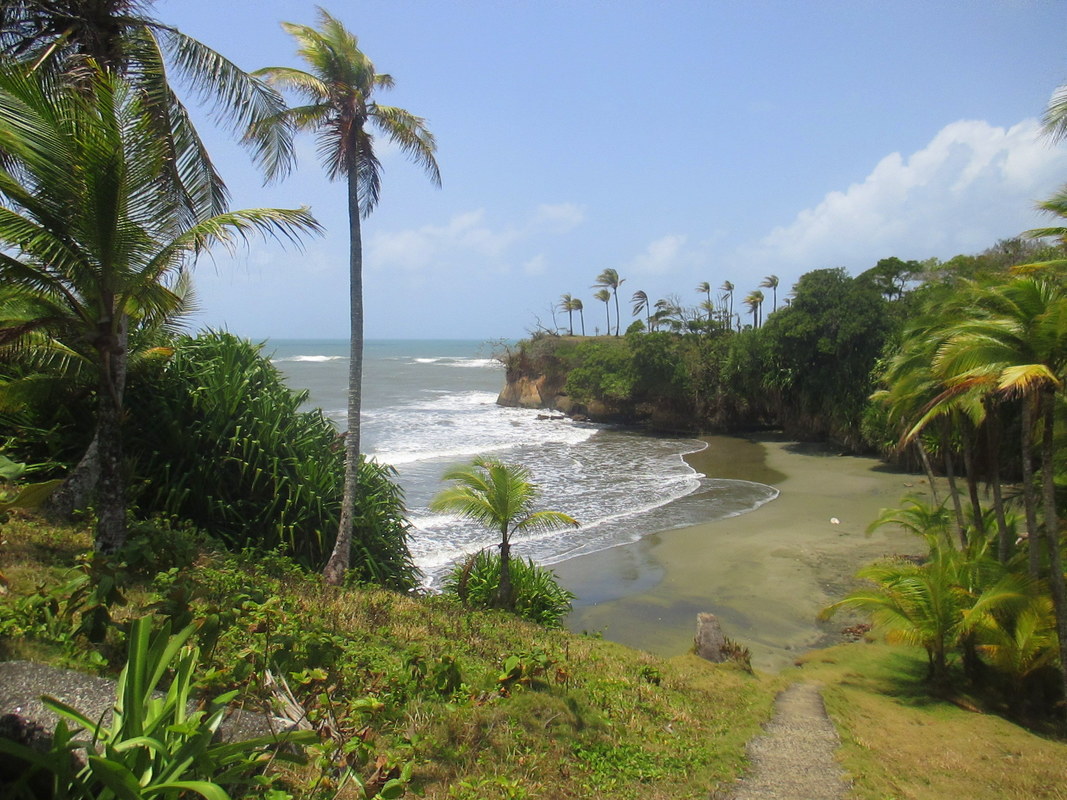 Getting into Panamá… I assume jumping out of a helicopter with a parachute, running into the jungle, digging an underground tunnel and crawl a few kilometres until you discover the first sign of civilization gives less of a hassle than taking a ferry from Cartagena to Colón. It’s quite interesting that a country with such a childish name is so extremely difficult at the border.

Corruption stands strong in this part of the world.

It’s definitely not my first border crossing, but it made me wish it was the last one. A time path:

4PM: According to schedule, passengers should arrive at the Cartagena harbour right now. However, this is Colombia, so I’m not in a rush. In fact, I’m still participating in the food tour of my Couchsurfing tourguide Sebastián and stuffing myself with a higher amount of calories than the number of men Chasey Lain ever slept with. 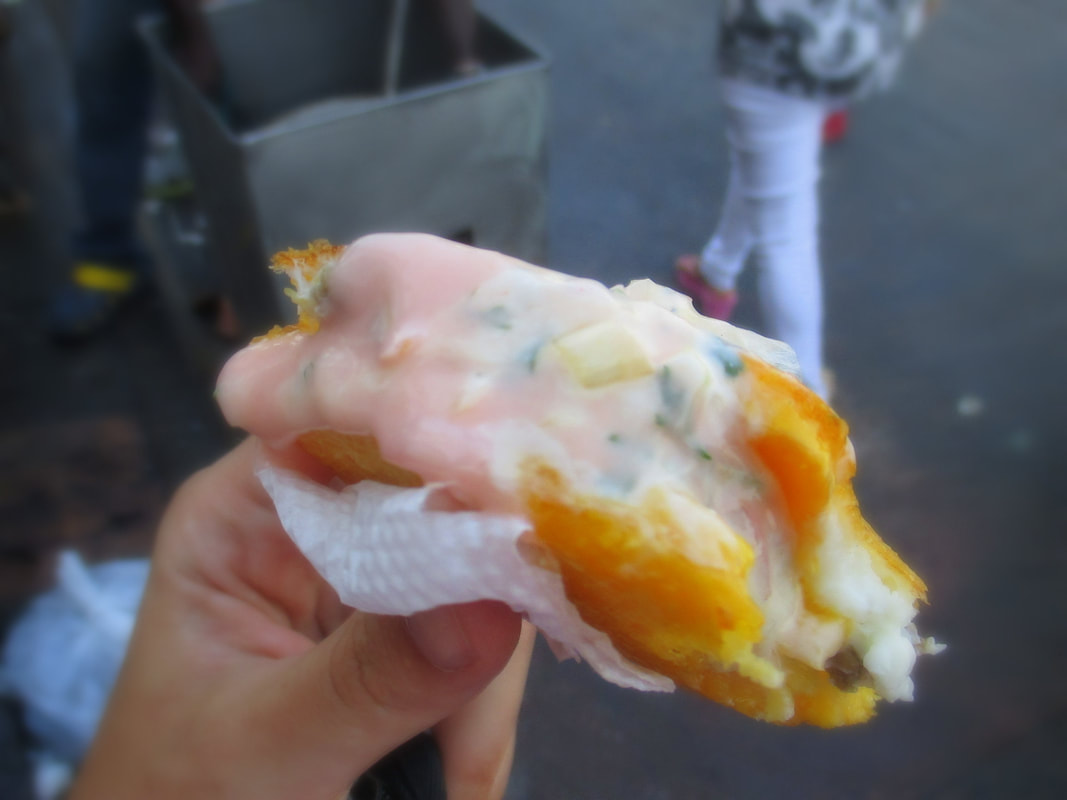 5PM: Although my surrounding Colombians tell me I still have all the time in the world, there’s still European blood pumping through my veins...  Feeling fat and disgusting from these piles of food, I hurry to grab my luggage and GO.

6PM:  After being seriously overcharged by the cab driver I arrived at the harbour. To save some cash I brought a bag full of food, which I am told by the staff is not allowed by customs. Grumpy I enter the line of which I can’t see the end.
​
7PM: According to schedule, the boat should leave now. Instead, me and 500 other people are still waiting in line for customs and immigrations. 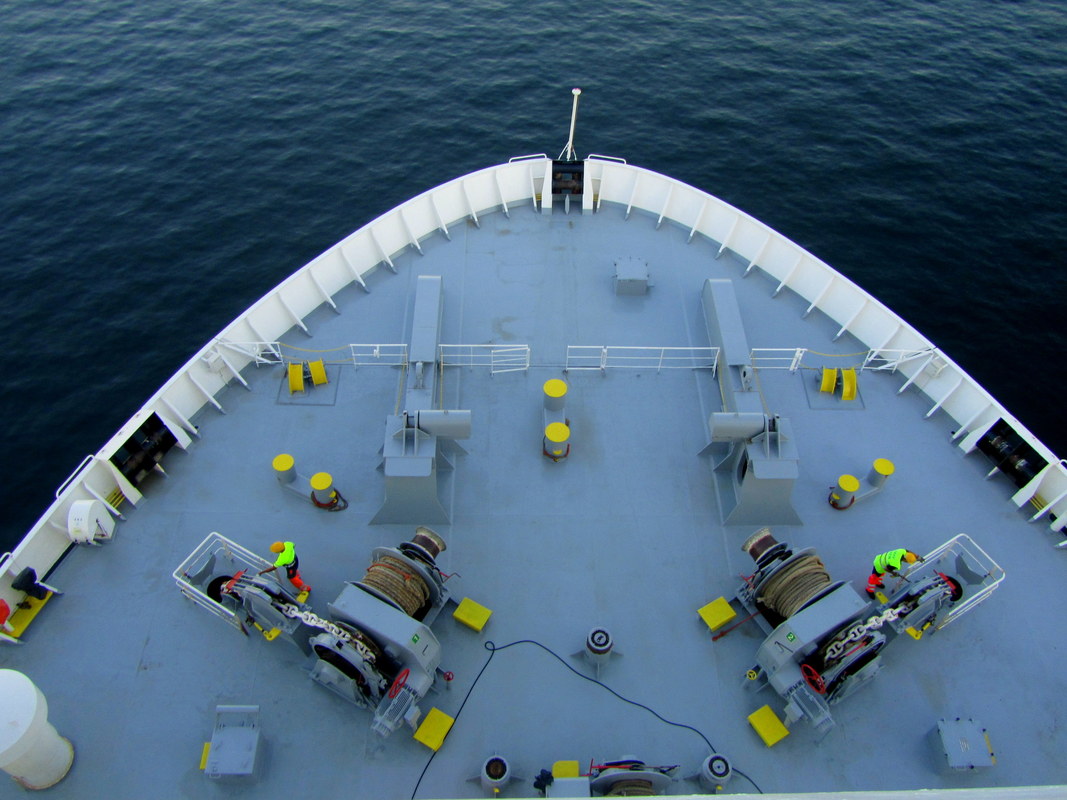 8PM: I arrived at immigration. Food appeared not to be the problem, my visa was. I was sent to three different desks and learned I ‘overstayed my visa’.  I pointed at the stamp from 24-Dec: a 90-days visa, today’s date: 12-Mar... I even did the maths for them to point out I had about two weeks left. Then I looked into the guy’s eyes and understood this wasn’t about my visa, this was about corruption: He made up some bullshit explanation saying that there are two different institutions and visa’s are in fact 60 days although the stamps says 90 days (good story bro)...

In short: He wanted money, the rate of overstaying was COP180,000 and that was about to disappear in his pocket.

If not, he threatened that he would give (wrong) information to the  police and I would have a lot of trouble in Panamá. I explained I had $120 and still had to pay my boat ticket with that, so I didn’t have enough... Things got ugly...  BUT luckily being a chick has its advantages: A big biker joined the conversation and paid all the money on my behalf. Not very emancipated, but damn convenient. Also, when the corrupt officer refused to give a receipt or make a note in my passport the size of this 120kg-bearded-outcast convinced him otherwise.

9PM: I paid $99 for the boat ticket +$5, as also Ferry Xpress joined the rip-off circus by charging me for a ‘cancellation insurance’ for a ticket I booked just a few hours ago.

10PM: A sailor asked me: “Are you angry, princesa?” I counted to 10 and told him quietly “Sí amigo, y sabes porque? Colombia conquered my heart, I am under the spell of your country... but today it showed me the side of its corrupción.” He smiled sadly and nodded: “Disculpe, es verdad”.
​
11PM: Ok, let’s lose this negative energy and explore my prison for the next twenty hours. Looks quite luxurious... and familiar... hey, why are all the signs in Italian?  Ah, I sailed in the exact same ship before: from Sicily to Naples! I guess I’m the only person on this ship who can say that. 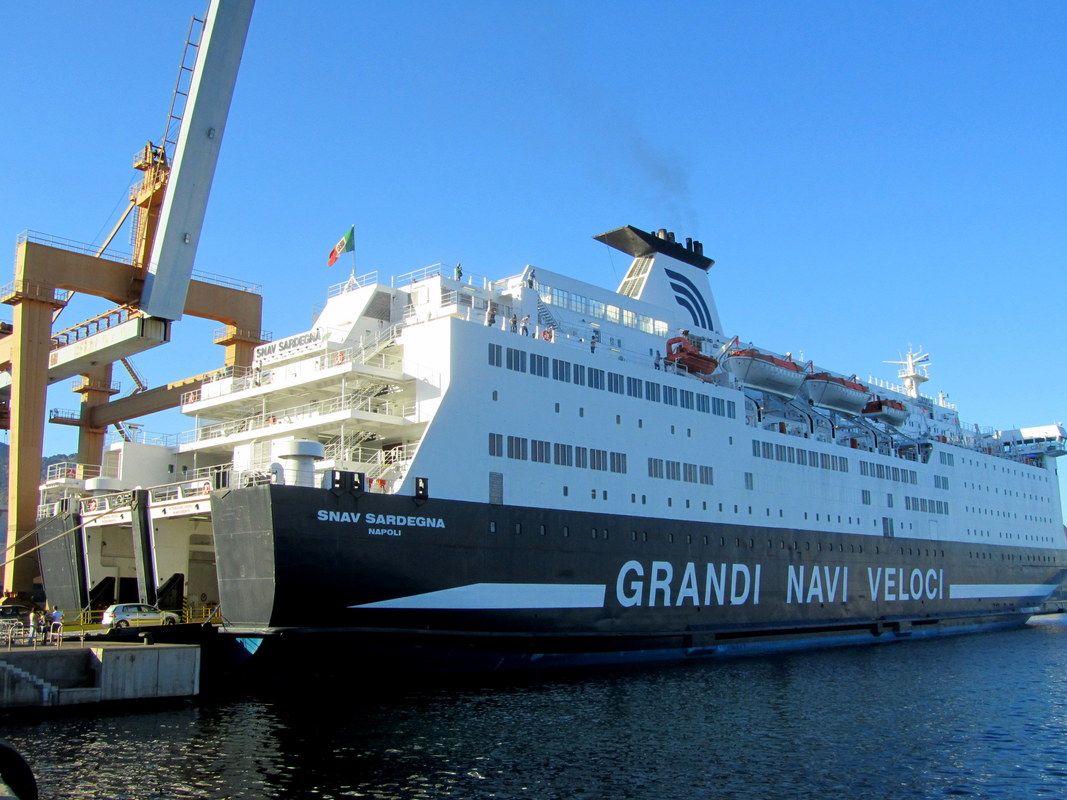 3PM: Ah already there! Wow, that wasn’t that bad for a Friday 13th... right? ... Right?
​
4PM: Sweating my skin off while waiting at the embassy. I made a fake proof of onward travel (flight ticket) as that’s required, I hope they fall for it. In fact I have no idea when I leave their country, I’m a free soul. 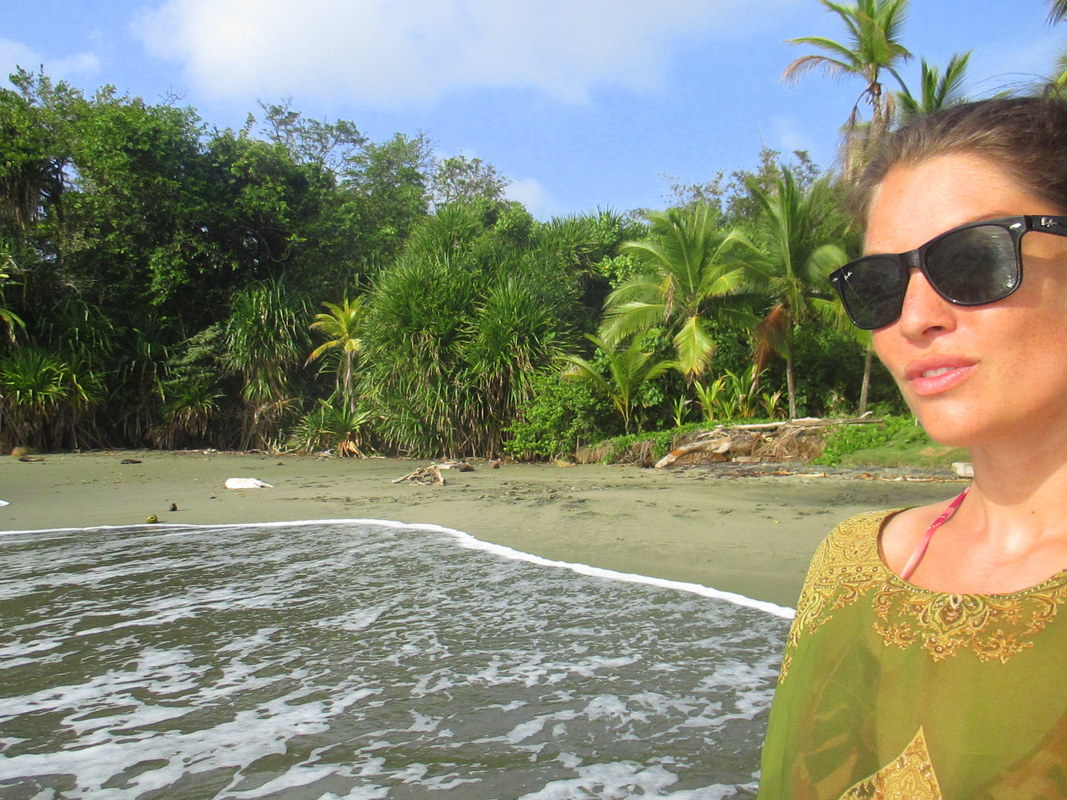 5PM: Self-high-five, I am a good fraud! Helloooo Panamá! Let’s get some cash out. Ok, I tried five cash machines and attempted to get money with my passport at the casino, but nothing works. All banks are closed now, I have 10 bucks. I’m screwed.

6PM – 7PM: Tried to borrow money from some Dutchies I met on the boat, but... luckily... after frustrating, cursing my life and forcing myself to think clearly, the solution revealed itself: my sweet little mother. She called the bank that apparently blocked my Maestro-card for Central America, although six months ago I enabled my card for usage in this continent. What else can you expect from a bank that also accidentally blocked my credit card while I’m travelling without a permanent address to send a new one to, so I was without a credit card for 10 months?
​
8PM: Let’s take a bus to my Couchsurfer in Costa Abajo, Morgan Bay... Normally I decide to go to a specific destination and look for a cool Couchsurfer. This time I found the Couchsurfer, saw where he lived (1.5 hrs from Colón where my ferry arrived) and decided to travel to this secluded beach hide-out which was so remote it didn’t even have an address. 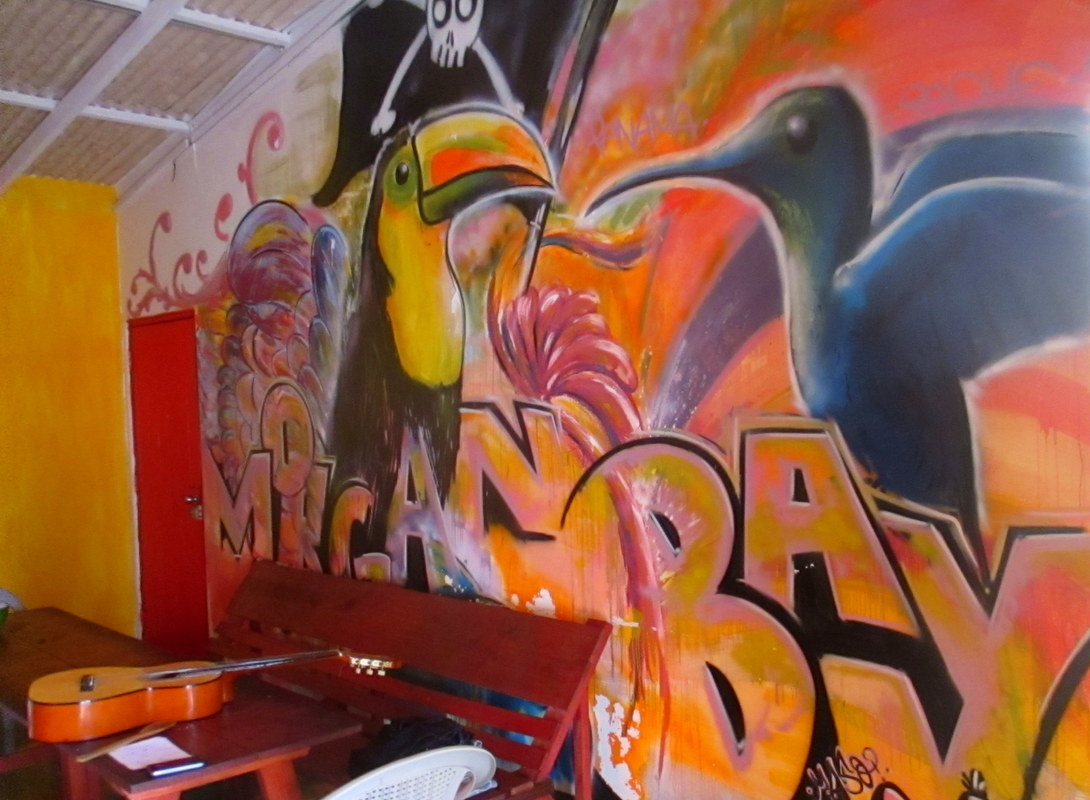 I bought a bag full of food, as no supermarkets are existent in Costa Abajo. As usual, I didn’t use a bag for the fruits and presented my backpack to put all groceries in, as I like to minimize the usage of plastic. This resulted in a big environmental discussion at the cash desk: They didn’t allow selling fruit without a plastic bag around it, with the logical reason that they employed a guy whose job it was to put plastic bags around everything their customers bought.  Aha. This pollution issue appears to be as alarming in Central- as in South-America and it takes up a lot of my energy explaining, irritating and worrying about the continuous raping of Mother Earth.
​
I asked if they liked the national parks and the beaches Panamá is famous for, upon which they enthusiastically nodded with pride. Consequently I informed the bag-guy about the vacancies I just found on Greenpeace’s website, maybe an interesting career switch? 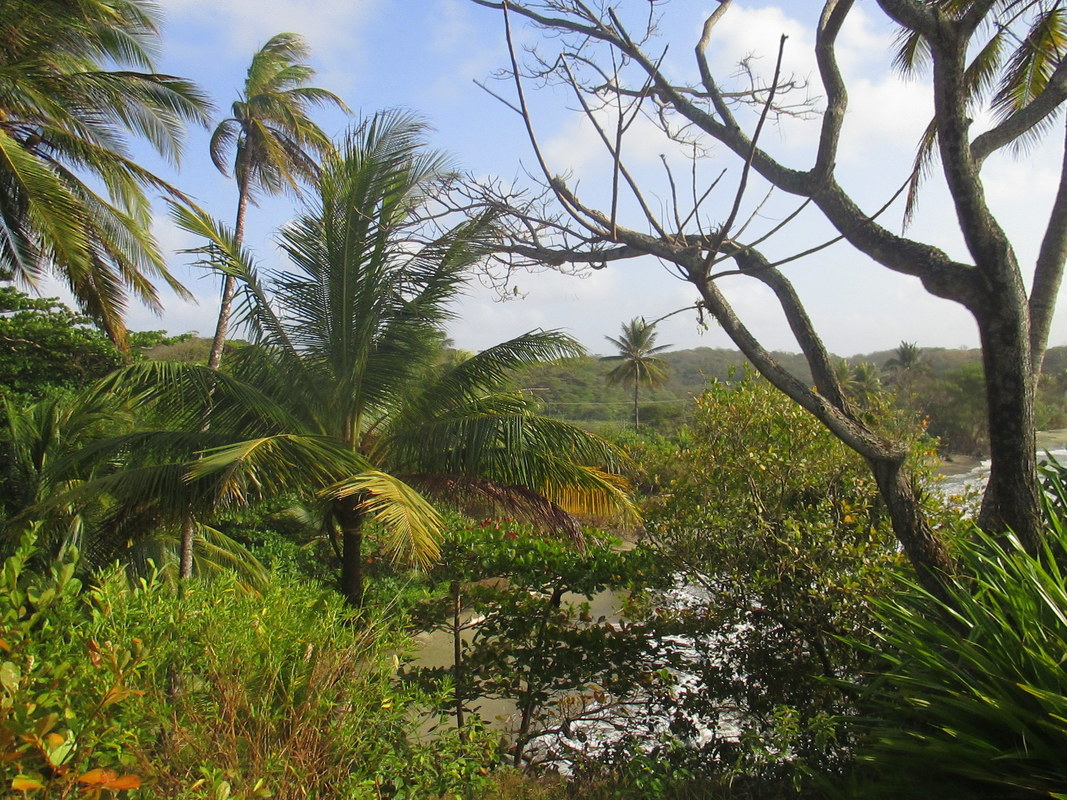 I hurried to the bus terminal to get the last bus to Costa Abajo. I waited... half an hour... one hour... two hours and then finally a colourful throbbing bus made its entrance. The scenes that I was about to witness might as well have happened in India.

People started screaming and running to the bus, climbed on the rooftop and entered via the windows, hitting and pushing each other like they had to defend their life and property.

I was beyond exhausted at this point, but I’ll be damned if I have to wait another two hours. So with my two backpacks and food supply I smashed myself into the bus via the window, unable to move anymore once in. Squeezed in the aisle I asked a guy how long it would take to get to Morgan Bay. “About 40 minutes”, he answered in an incomprehensible accent. After 40 minutes I asked again. “Oh, still about 40 minutes” was the passionless answer. I just stared, imagined happy places and waited until it was all over.

When I finally... finally... FINALLY arrived at Morgan Bay I conquered a bunch of aggressive barking dogs before Couchsurfer Daniel rescued me. Before we could talk, I said we needed to open the bottle of wine I brought, as I was in desperate need for something strong. 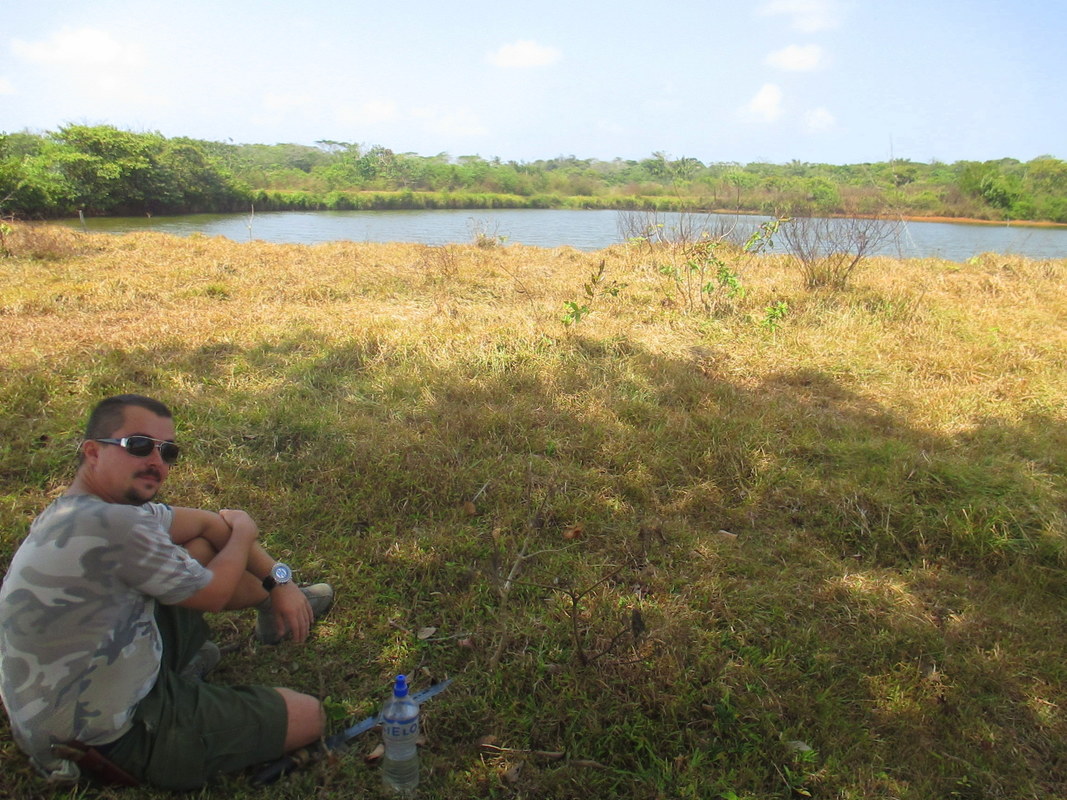 ​His ‘couch’ in fact appeared to be a beach hotel in which I had my own private room for free (usually $30 p/n). This remote hide-out had two private beaches so unbelievably scenic that you can only find something similar back on photoshopped magazine-covers, and it was located right at the entrance of San Lorenzo National Park. Yes, it pays off to travel way off the backpacker-track. 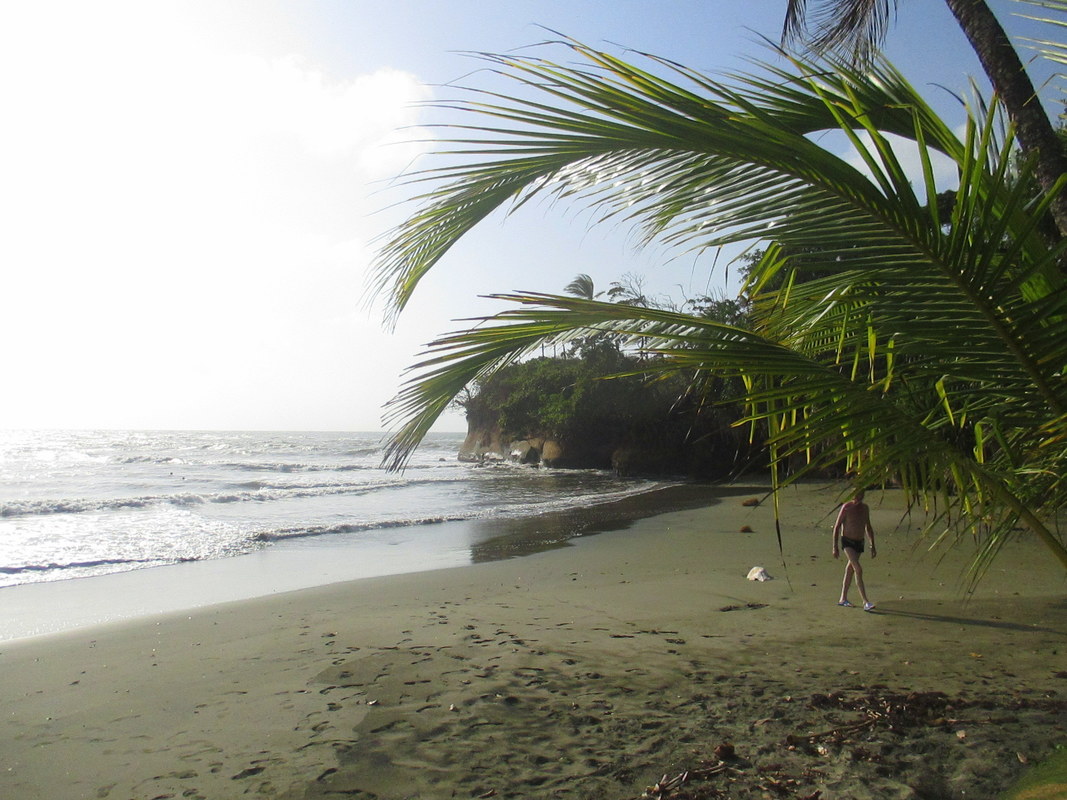 The Czech-Slovakian Daniel and I hung out all night, while he snorted one line after the other. I was curious about his life story as not many Slovaks go outside their country’s borders. His story was quite unusual to say the least. My host had a few businesses back home but wasn’t really keen on paying taxes. After a few years of fraud the authorities tracked him down though and sentenced him for five years of prison. This was not how he intended to spend his 20’ies, so he fled to Panamá and found this secluded hiding place.

At the moment he was in the process of changing his passport and identity, while being closely connected to the local drugs scene. Curious? You can find my host on Interpol. 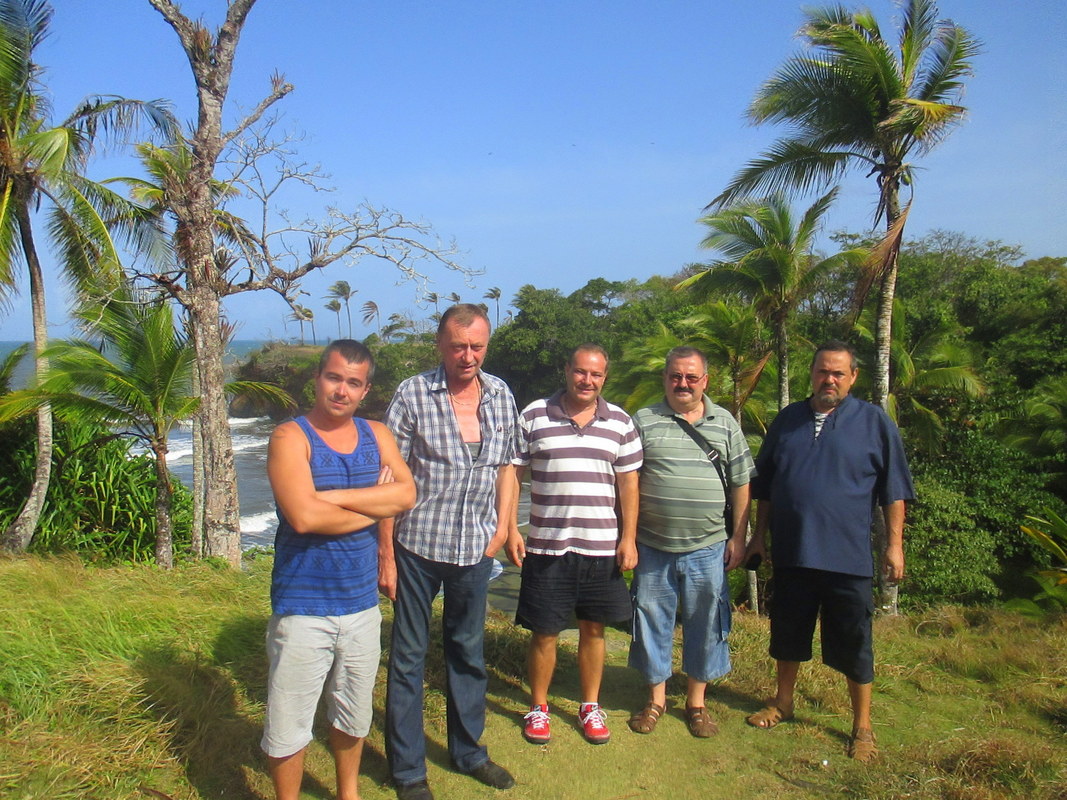 Now, where most people would have been shocked and try to get away as soon as possible, I rather be open-minded. I first want to judge someone’s personality before I judge someone’s “mistakes” (which is up for discussion anyway).

I did notice his stories got weird though, as he for example stated that he was the owner of the property and gave his house away for free to four always drunk old Czechs who were living there too. Why would you do that? He didn’t. The next day I learned from one of the old Czechs, Big Willie (his belly was as big as my whole body folded up),  that he never owned this property but instead rented a room for which he failed to pay for months now as he was broke...  Strange, to me he bragged he was loaded.
​
Also, Daniel had asked them to arrange cocaine for ME, as he convinced them I needed a fix every day.  Interesting statement from a guy who I saw sniffing line after line right in front of me the night before and replacing his morning coffee with some extra marching powder, whereas I needed nothing more than a glass of wine. 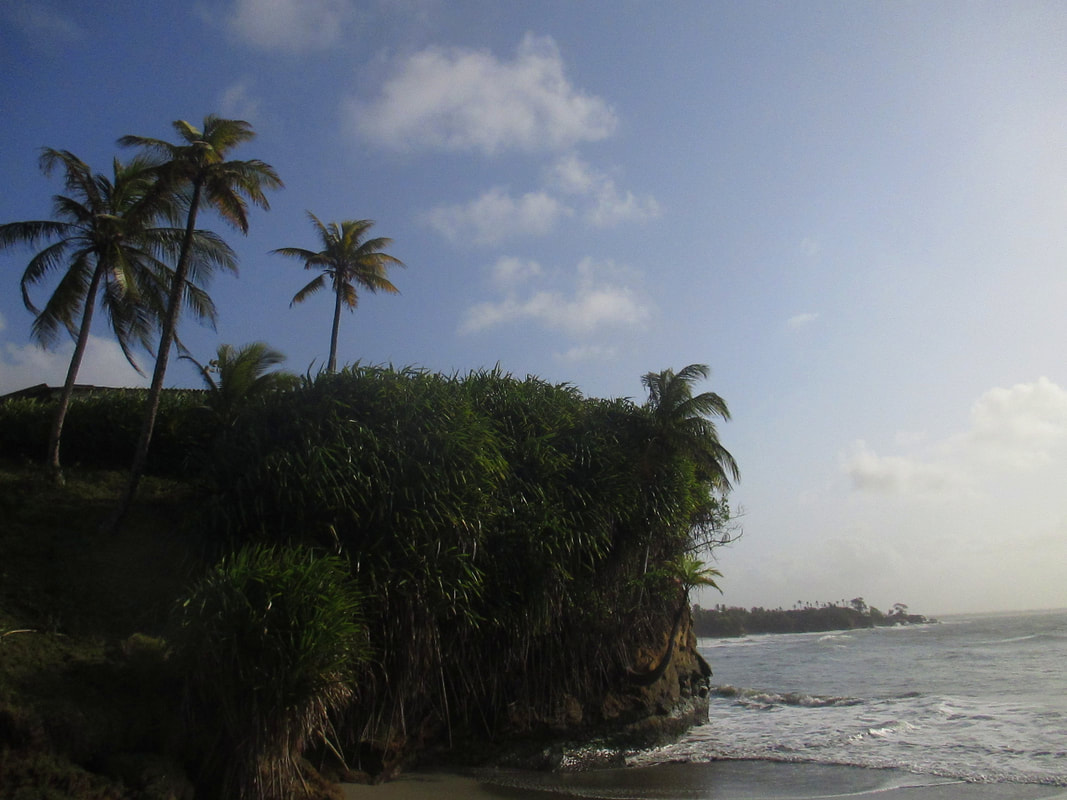 Also, he told all men he had amazing sex with me the night before. Okay cool, can’t remember it though! But nice to know that even in imaginary situations I’m great in bed.

Obviously, this person is troubled. I decided not to just let him talk, sometimes imagination is funnier and more creative than reality and I was interested in where that disturbed mind wandered to. I decided to stay. I know exactly when I might be in a dangerous situation and that was not the case right now. This was one of those interesting opportunities to learn about life.

And learning is even better at a location of which I can’t even describe the unreal beauty. Letting your thoughts flow while conquering the wild waves of the refreshing Caribbean Sea... Falling asleep on the fluorescent green moss hidden in a cave under the palm trees...
Exploring the mind courses of a troubled man while hiking in the San Lorenzo National Park and looking out for snakes, crocodiles and poisonous spiders... Making friends with people triple my age who don’t know any language I speak, while learning how to prepare ancient Czech-Slovakian dishes in the burning sun and tasting the self-brewed alcohol of these odd Panamanian immigrants... Wondering if our world will ever change while seeing police officers on duty renting rooms for an hour with some girls making money, in exchange for drugs...

Sometimes you realize you’re in the middle of a story you're going to tell many times in your life. 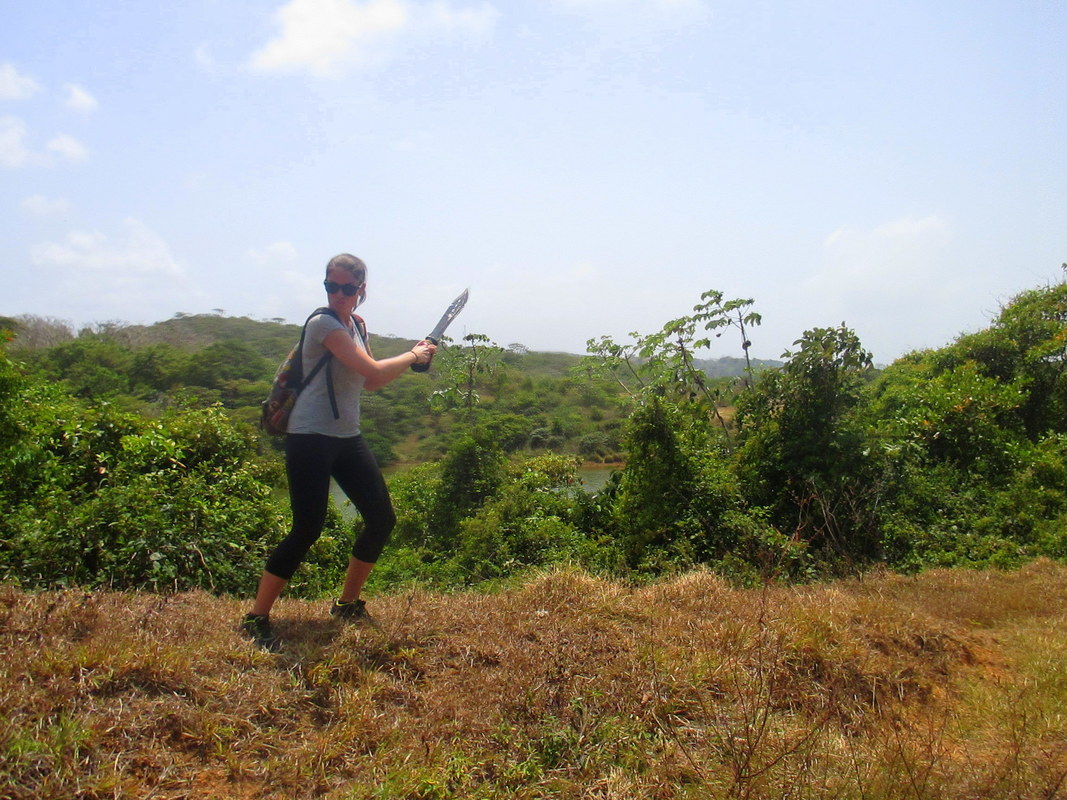 A place that will slowly turn into some legendary location where exciting things once happened, coloured in by the melancholic memories of forgotten times.