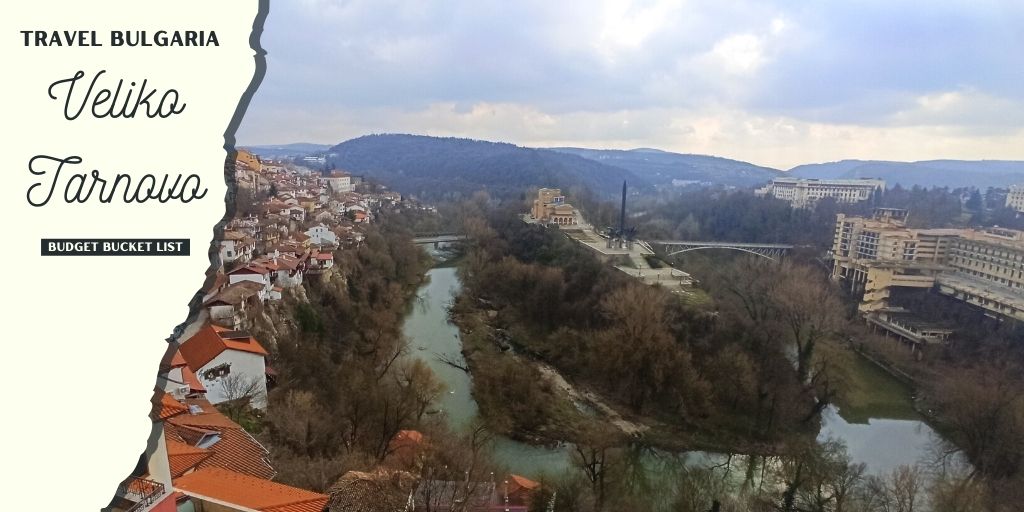 Not in the story-mood? Scroll down for the Quick Budget Fact Overview: an itemized information summary of Veliko Tarnovo! ↓
If you plan on visiting Bulgaria, odds are high you intend to include Veliko Tarnovo into your itinerary. If this is indeed so, I like where you’re head's at! This town is visually quite the stunner, with its unique architecture and traditional houses crawling up the banks of the swirling Yantra River and onto the Tsaravets, Trapezitsa and Sveta Gora hills. It is also Bulgaria’s oldest city and former capital! Nicknamed the “City of Tsars”, it was in fact in Veliko Tarnovo where the brothers Asen and Petar ended the Byzantine rule.  With a series of nominations as the “Capital of Cultural Tourism” and the “Most Beautiful Town in Bulgaria” it surely is a destination hard to ignore (and you definitely wouldn’t want to!).

Sure, many cities in Bulgaria include a historical “Old Town” area. But if Veliko Tarnovo is Bulgaria’s oldest city, that makes its Old Town its “Oldest Town”. And doesn’t Bulgaria know it! Resources nor efforts were spared to protect and restore the traditional buildings that embellish Veliko Tarnovo with its unique character, preserving what the country once was like an eye-pleasing time capsule. The streets of Samovodska Charshiya and Ulitsa General Gurko are perhaps the most famous of all… but honestly, I prefer to refrain from suggesting a walking route for a recommended exploration. Those twirling cobblestone alleys simply invite to get lost, anxious to reveal new hidden marvels after every unsuspected turn and corner.

Veliko Tarnovo’s history is multi-layered. The beautiful part is that every era left its traces, which are still telling their tales in today’s day and age. The furthest trip back in time comes with a visit to the Trapezitsa Hill where the first traces of human presence were discovered, dating all the way back to the 3d millennium BC. Fast-forward to the Roman Empire: the archaeological reserve Nicopolis Ad Istrum, about 20km outside of town, was founded around 102-106 by Emperor Trajan. The settlement continued to prosper after the split-up into the western and eastern (Byzantine) Empire, right until its destruction in the late 7th century during the Avar-Byzantine Wars.

The bloody uprising of the brothers Ivan and Pete Asen against the Byzantine Empire (1185) heralds a new chapter in Bulgarian history… the chapter of the Second Bulgarian Empire ruled by the Asen Dynasty, with Tarnovgrad (Veliko Tarnovo’s old name) as the capital city. The absolutely massive Asen Monument on the banks of the Yantra, reminding us of this victory, is impossible to miss. This period marks the most prosperous times of the city, when also its political, cultural and religious power was at its peak. The Tsarevets Fortress forms another prime monument of this era. This fortress in fact used to be a fortified medieval town, housing among others the royal and patriarchal palaces.

The tide turned when the Ottoman Empire absorbed the city (with the rest of Bulgarian Empire) in 1393. Despite Tirnova (its new name) forming the cradle of all anti-Ottoman uprisings, the enemy remained in power until the 19th century. The city was liberated on the 7th of July 1877 by the Russian general Joseph Vladimirovich Gurko. Indeed, the name of one of the Old Town’s main streets! The Mother of Bulgaria Monument commemorates the victims and heroes of this Russo-Turkish War, as well as the Serb-Bulgarian, the Balkan, and the First and Second World Wars. The Treaty of Berlin defined the Principality of Bulgaria, its seat located at Veliko Tarnovo. The first National Assembly convened here to ratify the state's first constitution (the Tarnovo Constitution), resulting in the transfer of the Parliament to Sofia… which remains the Bulgarian capital until today. Tsar Ferdinand declared the complete independence of Bulgaria in 1908 in the Forty Holy Martyrs Church.

The tumultuous history is depicted and celebrated in the flashy Tsarevgrad Turnov Sound and Light Show, which can be witnessed for free on Bulgaria’s public holidays. More recent history can be witnessed when visiting the neighborhoods Akacia and Kartala, which were the result of expansion tied to communist industrialization and urbanization.


* All monuments mentioned in this paragraph charge an entry price, incl. the church. However, the Tsarevgrad Turnov Sound and Light Show can be watched for free from the roof of Hotel Studio or the Fortress / Tsar Asen I Square. 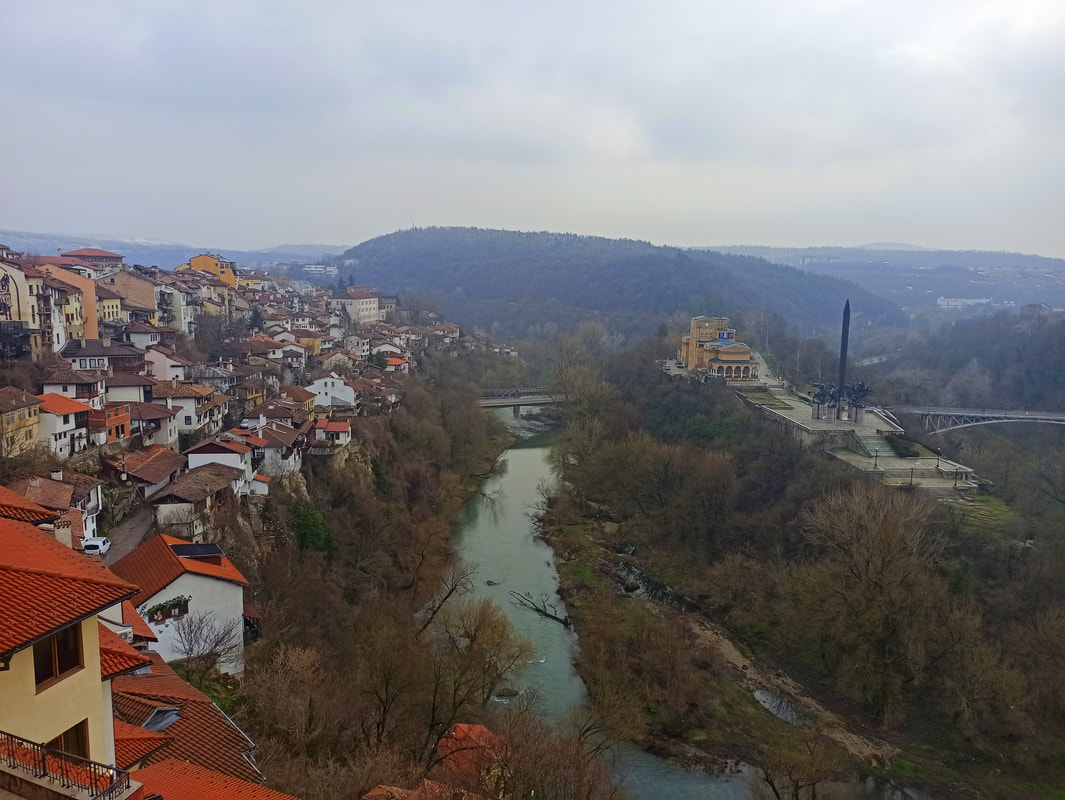 3: More Museums Than Days To Visit

Even though Veliko Tarnovo can be considered an open-air museum in its own right, it actually houses a shit-ton of museums* within its city borders as well. To dive deeper into the above-described national history, the Archeaological Museum presents the findings connected to the Roman archeaological site Nikopolis Ad Istrum. To further explore the day-to-day-life and folklore during the Asen Dynasty, Middle Ages and early Bulgarian revival under Ottoman oppression, the Ethnographic Museum, the Sarafkina’s House and the Tsarevgrad Tarnov Multimedia Wax Museum might be of further assistance. The Museum of Bulgarian Revival and Constituent Assembly is located in the building previously housing the Ottoman authorities, and where later in 1879 the Bulgarian Constitution was signed. Its collection focuses on the development of Christian art which proceeded to be produced during the Ottoman domination, the struggle for liberation, as well as local trade up until the early communist industrialization. At its side you can find the Museum of Prison, which was the last unfortunate station for many brave Bulgarian revolutionaries. The Slaveikov House zooms in on the life of one of these reformers… a man who took part in the Russo-Turkish War and fought for the foundations of an independent Bulgarian Church. On a lighter note: The Boris Denev State Art Gallery highlights the works of this Veliko-Tarnovo-born artist, whose pieces focus on representing the beauty of Bulgaria’s natural landscapes and the unique charm of the cities.

Budget Bucket List tip: On the last Thursday of every month, all museums are FREE! (except of the Tsarevgrad Tarnov Multimedia Wax Museum). On other days of the month: All museums have separate entry prices, so the “2-days combined ticket for 10 museums” could be beneficial. 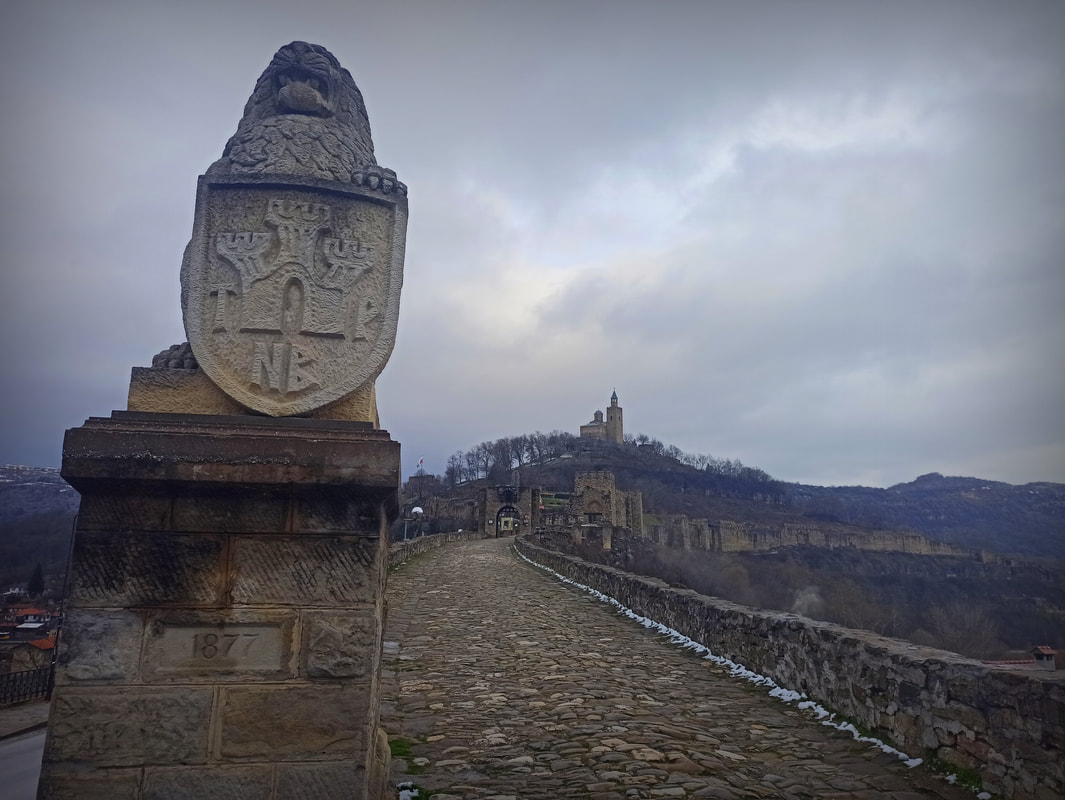 Veliko Tarnovo represents one of the most prominent Bulgarian destinations with regards to historical and cultural heritage… but this overload of information and impressions needs time to breathe! Luckily, in a country like Bulgaria nature is always around the corner. This doesn’t just include the city’s green heart, the Sveta Gora Park. Surrounding Veliko Tarnovo one can trace down up to 50 (!) limestone caves, dating from the Jurassic and Cretaceous eras (located on Arbanasi Hill and the Dervent Gorge). This, combined with canyons, waterfalls (Kaya Bunar) and a wealth of forests and vegetation, creates an environment inhabitable by animal species such as foxes, deer, hedgehogs and turtles. With 350 types of birds, this area also forms a true birding destination. Hikers can enjoy multiple marked trails, including the Preobrazhenska Path, the Arbanashka Path and the Negovanska Path in the  Emen Canyon . Besides trekking, the region has a great infrastructure for mountain biking, rock climbing, horseback riding and swimming. 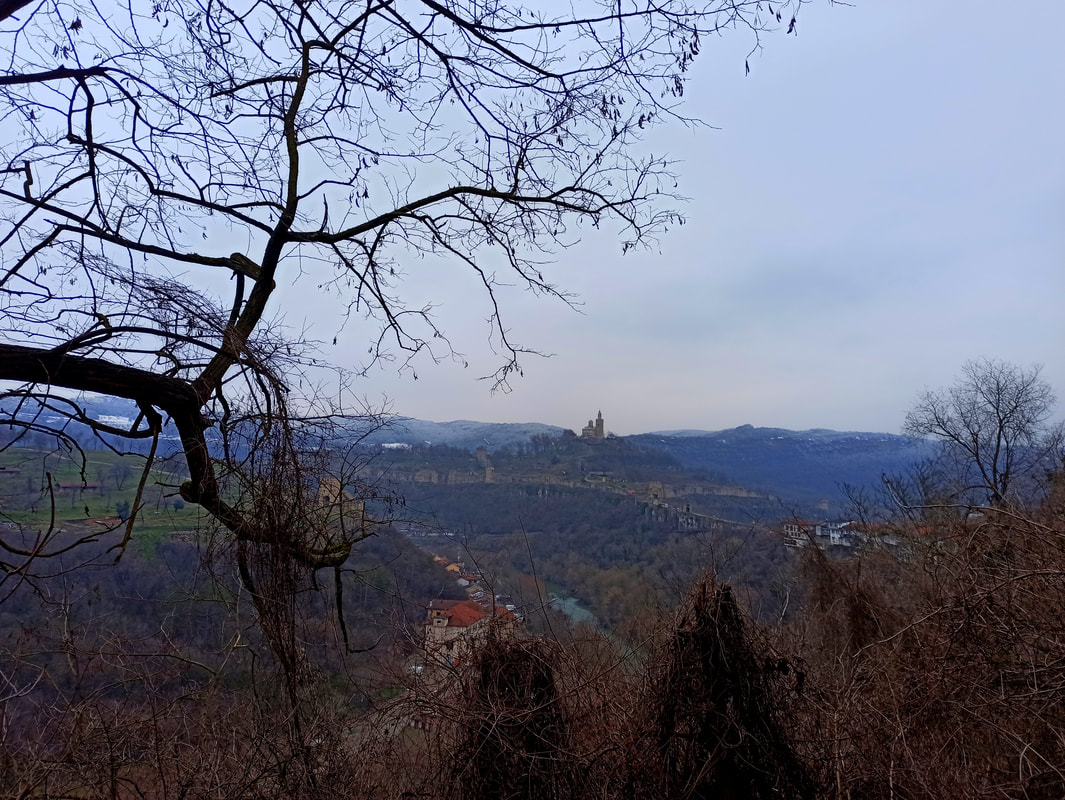 Something I immediately noticed when jaunting down the charming streets of Veliko Tarnovo, is the ample supply of snug traditional restaurants. The perfect scene for sampling the delicious tastes of the local cuisine! Honestly, I’m impressed. As I never ever traced down a Bulgarian restaurant outside of its own land borders, I used to be miserably ignorant of its mouth-watering dishes… but now I know, I won’t ever forget about it. My go-to favorite is most definitely Sach, a steamy hot stew served in a heavy oven pot. Most contain meat, but I have tried a delicious vegetarian version. Other winners are the Moussaka (potato-egg-pork oven dish), Sarmi (cabbage-wrapped rolls) and Kyopolou (eggplant with bell peppers). I’m definitely not the biggest lover of meat, but the rest of Bulgaria begs to disagree: Gyuvech (beef-veggie-stew), Kiufte (köfte – minced pork), Kebabche (grilled meat), Meshana Skara (mixed grill), Lukanka (dried salami) and Shishche (meat-veggie skewers) are a few of the countless options in this carnivore galore. There’s even a dish named after me: The “Rulo Stephanie” is the Bulgarian answer to a meat loaf. As my life revolves around bread, I couldn’t keep my hands off delicacies such as Banitsa (cheese-stuffed pastry), Börek (cheese / meat / spinach stuffed pastry) and Parlenko (grilled flat bread)… If possible, dipped in a dollop of Lyutenitsa (tomato-pepper relish, similar to Serbian ajvar) or Kyopulu (roasted eggplant and bell pepper dish).*

If you’re brave enough: Down it all with a pure short of rakija, Bulgaria's national drink. Nazdrave!


* The most elaborate overview on Bulgarian cuisine can be found here.
Quick Budget Fact Overview 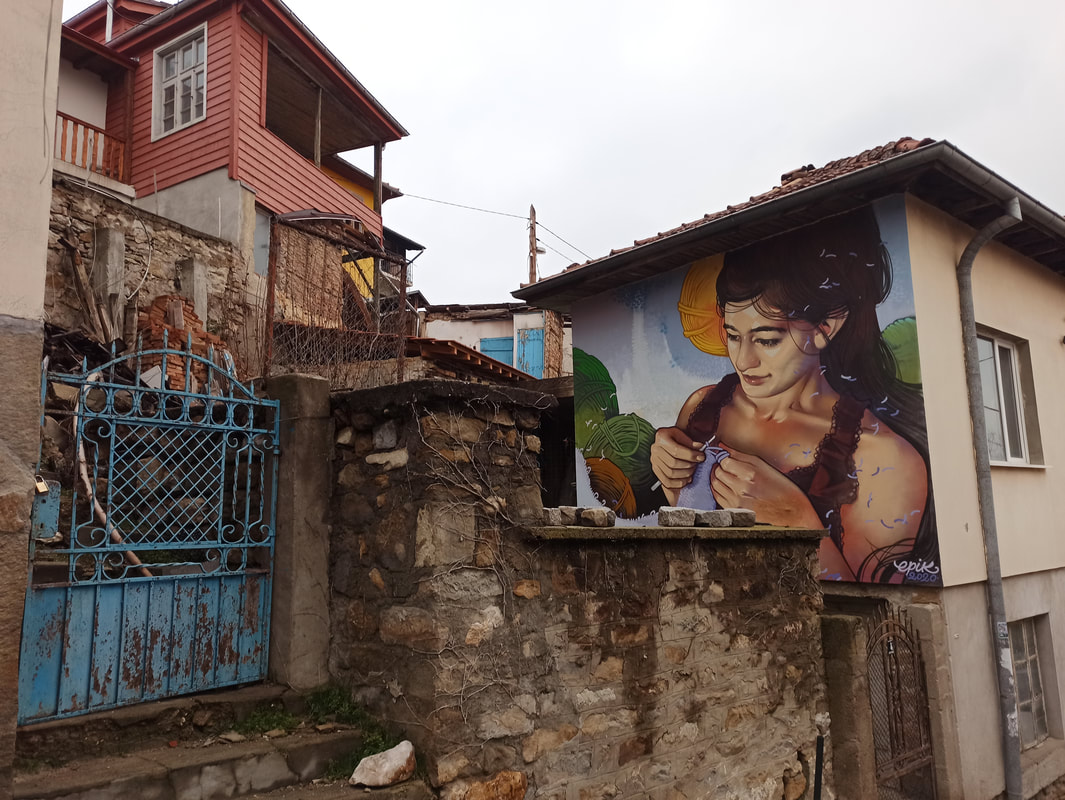 These are my personal recommendations. A full overview can be found here. You can order your Lonely Planet here. 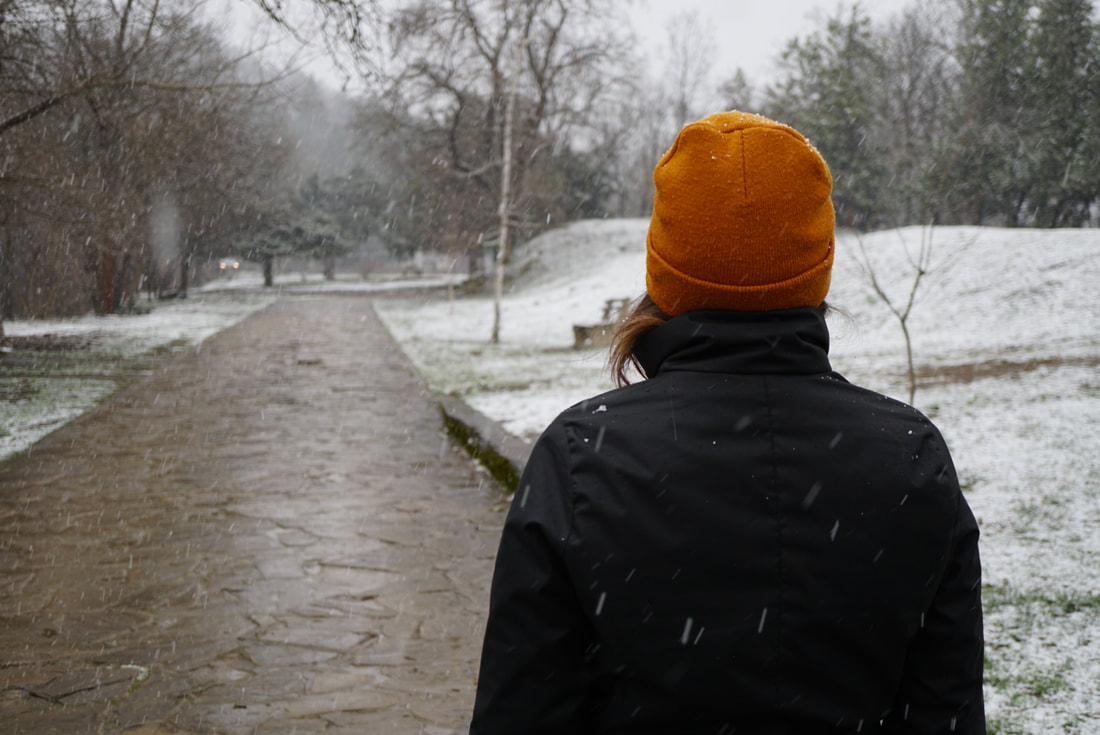 
Next?
​
In order to support the travelers’ community, I spend many hours per week to adequately document all information and advices for prospective visitors, accompanied by a (hopefully) entertaining insight into my personal observations and experiences. This service is and will remain free. However, if you voluntarily want to make a contribution and support my travels and thus the creation of new stories and information supply, here is the button you’re looking for:
Donate
Related:
- Be about Bulgaria: Check off Bansko, Belogradchik, Plovdiv, and of course Sofia!
​​- Skiing on a budget: Romania's top ski resorts!
​​- Check out Budget Bucket List's FAVORITE HIKING DESTINATIONS worldwide!
- Visit Balkan's finest: Montenegro's National Parks Blog, Kotor Bay & Lovcen NP and Cetinje, Podgorica, Prokletije NP and Montenegro's Coastal Towns Blog
​- Get your Albania itinerary ready: Berat, Gjirokastër, Korcë / Ohrid Lake, Theth, Shkodër, Tirana, Mount Korab & the coast!
- 10 typical Dutch celebrations no traveller should miss out on
​​- History preserved: Time capsule of Romanian culture Maramures
- Where modern meets classic: Vilnius, Lithuania
​- 8 ways to save money in Vienna, Austria
​​- German gems: Aachen & Frankfurt am Main
​- Europe's best skiing & hiking: Get your ass over to jaw-dropping Switzerland!
​- Budget Bucket List hitchhike trip to... Kosovo!
- Unravel the mysteries of Serbia
​​- Discover the splendours of Turkey: Istanbul on a Budget & Reasons to visit Edirne