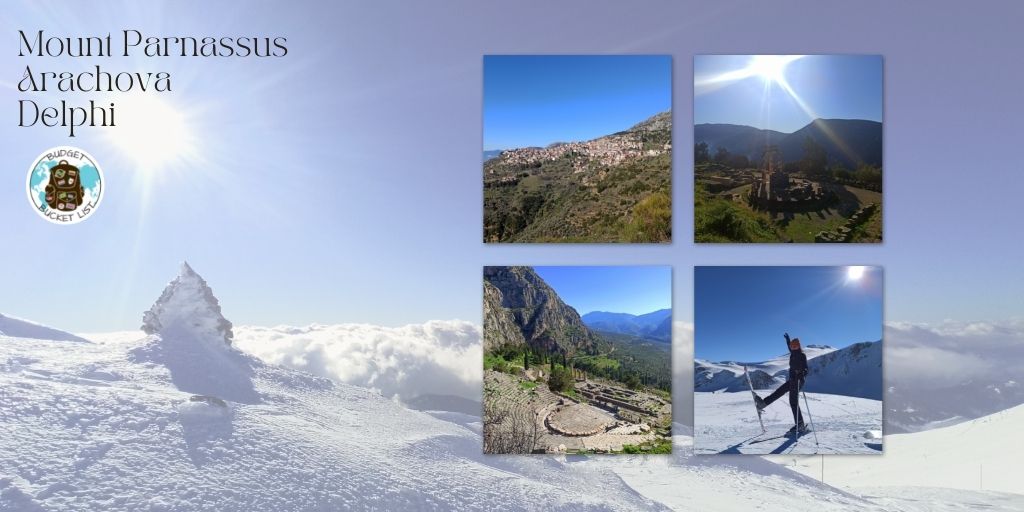 Not in the story-mood? Scroll down for the Quick Budget Fact Overview: an itemized information summary of the area ↓
Before I became familiar with the main highlights of Greece, I had already heard about Delphi. Probably just because my tiny little hometown had a Greek restaurant with this name… But go figure: If some obscure Dutch town called Bergen op Zoom has a diner called Delphi, this simultaneously gives away how widespread its fame and glory truly is. The location is recognized in Greek mythology as the center of the world, identified by Zeus himself after he released two golden eagles in different directions and threw down a stone* where they met… landing precisely at Delphi. Add to that the sublime surroundings of the Parnassos National Park and the idyllic settlement of Arachova creeping up its slopes, and you’ve got yourself one of Greece’s prime mainland destinations.


* The “Omphalus” / navel, which can still be admired in the Archaeological Museum of Delphi 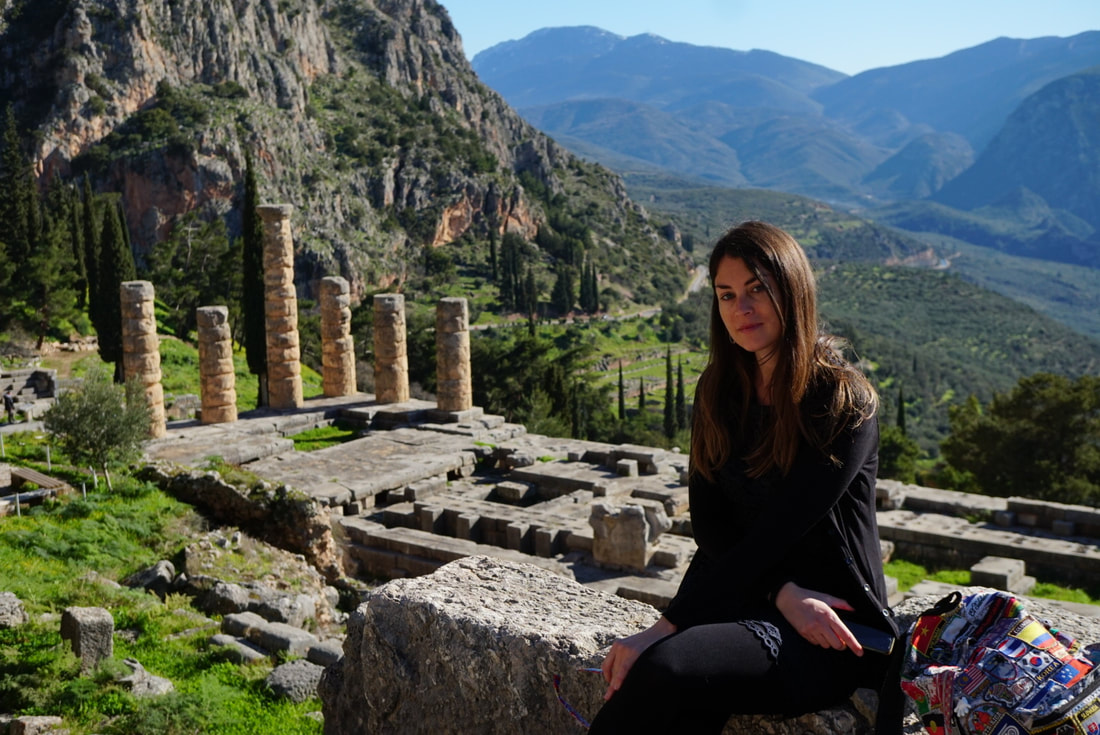 Photo by Miles Watson Photography.
Too busy to read now? No problem, save it for later!
​Save on Get Pocket | Save in Browser Bookmarks| Save on Instapaper
Delphi

The occupation of Delphi dates back to the Neolithic times, with an extensive utilization kicking off at the Mycenaean Period* (1750-1400BC). Initially, it was a place of worship for Gaia, the mother goddess of fertility. At a later stage, the focus shifted to Apollo, the god who slew the male serpent Python (which was temporarily the name of the site). As Python was the son of Gaia, Apollo was severely punished and forced to fly for eight years straight while performing menial labour. In later accounts, the python was considered female and named Delphyne, giving Delphi its name. When Apollo returned, the site was dedicated to honor him, and the Pythian Games were organized every four years to commemorate his victory… serving as the forebearer of the Olympic Games. According to the myths, after Apollo slew Python, its body fell into the chasm of the earth where fumes would arose from his decomposing body. The oracle was built on top of this chasm, allowing the prophetess (named Pythia) to inhale these vapors** which allowed Apollo to posses her spirit and speak through the oracle. The ambiguous “possessed” rants would subsequently be translated by the head priestess. The Oracle of Delphi had a significant influence in the Greek world (and even in early Roman times), and was generally consulted before all major undertakings, such as wars, the founding of colonies and political decisions.
​
In current days, the archaeological area is recognized as a UNESCO World Heritage Site and it is included in the Parnassos National Park.


* Read more about Mycenae and the Mycenaean Period as well as Olympia and the Olympic Games in this article.
** In reality, the fumes are thought to have been either ethylene or ethane, known to produce intense trances. 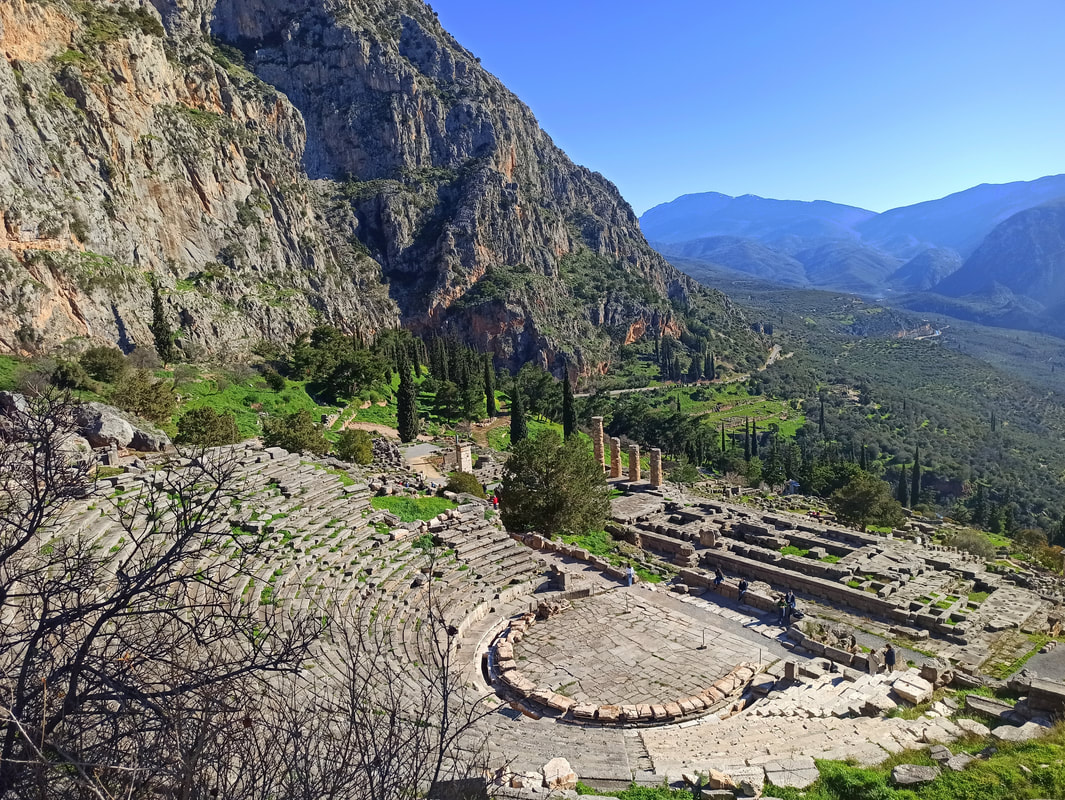 The first sight you (and all ancient pilgrims) see on the way to Delphi is the Temple of Athena. The Sanctuary of Athena Pronaia is a so-called “pre temple,” allowing the wayfarers to recuperate and prepare. As Athena is the Goddess of Wisdom, it’s believed this temple served the purpose of finding the wisdom to ask the right questions at the oracle. The impressive backdrop of glimmering cliffs covered in traditional olive groves aids to the overall feeling of a welcoming and peaceful place. On your way up to the oracle, you will pass the sacred Castalian Spring, its water enabling the purification of both the priests and pilgrims. Myth has it that this is where Python used to live.

Once you enter Delphi, you’ll first pass a series of statues and treasuries on the way up. Treasuries were built by separate Greek city-states to commemorate war victories and as way of thanking the oracles for their useful advice. Inside of the treasuries lay precious offerings to Apollo. The impressive Athenian Treasure is dedicated to the victory at the Battle of Marathon (490BC). Along the way you can notice the Stoa of the Athenians, a quarter of Delphi used for Athenian business and politics, built after their naval victory over the Persians.

The main site of Delphi is the Temple of Apollo. The original structure dates from the 6th Century BC, but the remains we can still see today are from the 4th BC. In front of it, you can find the black marble Altar of Chians, financed and built by the population of Chios. Another striking sight is undoubtedly the Ancient Theatre, giving (up to 4500) spectators a view of the entire sanctuary with a mind-boggling natural backdrop. The theatre dates back to the 4th Century BC, but was slightly altered in 160BC for the occasion of Emperor Nero’s visit. The side of it, the Polygonal Wall, is filled with liberation contracts of freed slaves. Structures tied to the Pythian Games include the Gymnasium, the Stadium (177m long and housing 6500 spectators), and the Hippodrome.
​
Don’t forget to pop into the Archaeological Museum, housing artefacts including the Sphinx of Naxos, the Omphalus and the Charioteer of Delphi, as well as golden treasures discovered beneath the Sacred Way.
Do you have your own vehicle at your disposal? You can end a cultural day at Delphi with a little side-trip to Galaxidi, a refreshing seaside town.

Yes, you can stay at “Modern Delphi” when visiting this UNESCO site. However, Arachova has much more character as well as a more strategic location if you also plan to visit Mount Parnassus (and you really should). Nicknamed the “Mykonos of the Mainland,” it’s definitely not your go-to budget destination… but there are ways to out-cheap this sophisticated spot. Personally I had the great pleasure to spend my time with fervent mountaineer and history-enthusiast Ilyas, who I was lucky enough to find on the Couchsurfing network.
​
Like any place in Greece, Arachova has an intriguing history, being surrounded by not only Delphi but also the Corycian Cave, a place of worship for the god Pan and the Muses. However, the town how we can witness it today with its idyllic houses and cobble stone streets was built in the late Middle Ages, around 1300. Historically, Arachova made a strong name for itself in their fierce efforts during the Greek War of Independence against the Ottomans, the backdrop of Mount Parnassus providing a strategical base. Nowadays its stunning architecture, layout and panoramic situation apparently has a strong appeal to the rich and famous (and somehow: me), serving as a place to see and be seen. 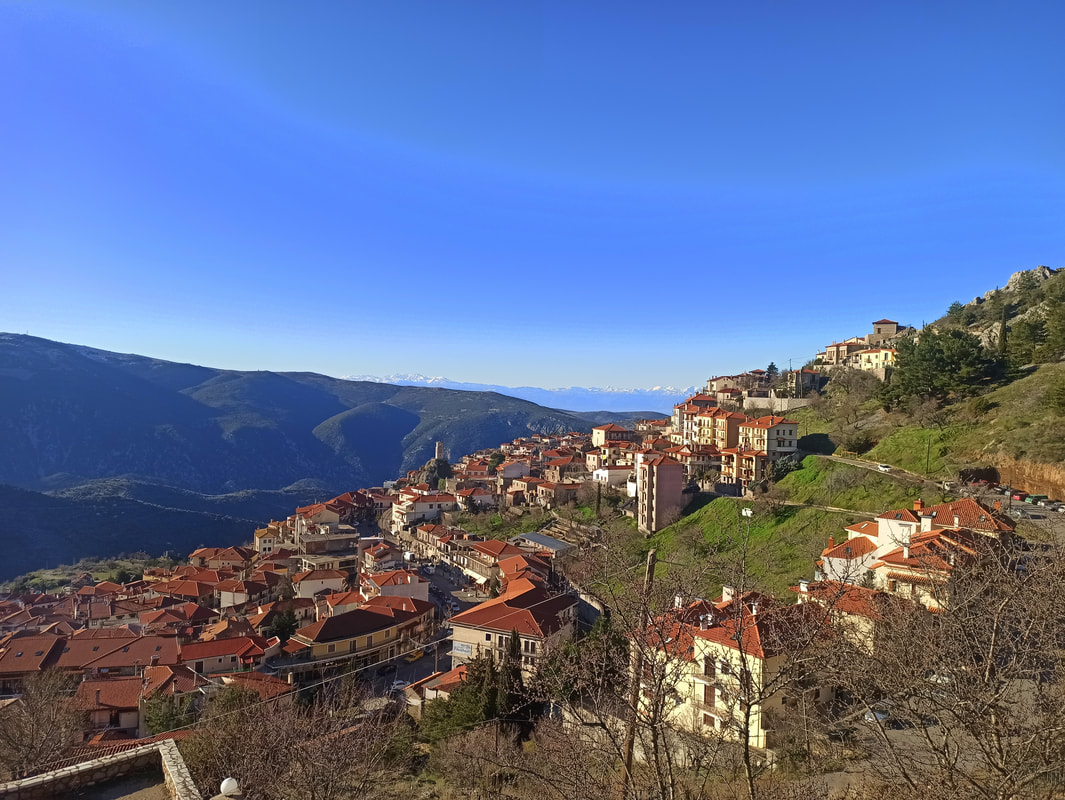 Amidst the abundancy of history and cultural significance to be found in Delphi and Arachova, we can appreciate Mount Parnassus as the dominant natural element. Besides one of the largest and highest* mountain ranges of the Greek mainland, characterized by rolling hills and profound olive-tree-covered groves, it also plays an influential role in Greek mythology. The peaks of Parnassus are believed to be sacred to Dionysus and Apollo, and forming the home of both the winged horse Pegasus and the beautiful Muses: the inspiration-goddesses of science, literature and the arts**. The name is derived from nymph Kleodora’s son Parnassos, and literally means “mountain of the house of the gods.”

Luckily, this indeed truly divine place is not exclusively reserved for the gods… In spring, summer and autumn the extensive network of hiking trails forming part of Parnassos National Park attract sporty visitors from all points of the compass, while in winter it serves as Greece’s largest and most distinguished ski resort. I was lucky enough to visit in the snowy season and utilised the opportunity to explore its 25 marked ski runs, comprising a total length of 36km. Not cheap (unless you go on the specific “low season” weekdays), but a truly recommended adventure you wouldn’t necessarily think is possible in a popular summer destination like Greece.


* The highest peak is Liakoura with a 2457m altitude.
** Sounds familiar? That’s right, Paris’ main artist quarter, Montparnasse, derived its name directly from Mount Parnassus and its link to the muses and their arts.
Quick Budget Fact Overview 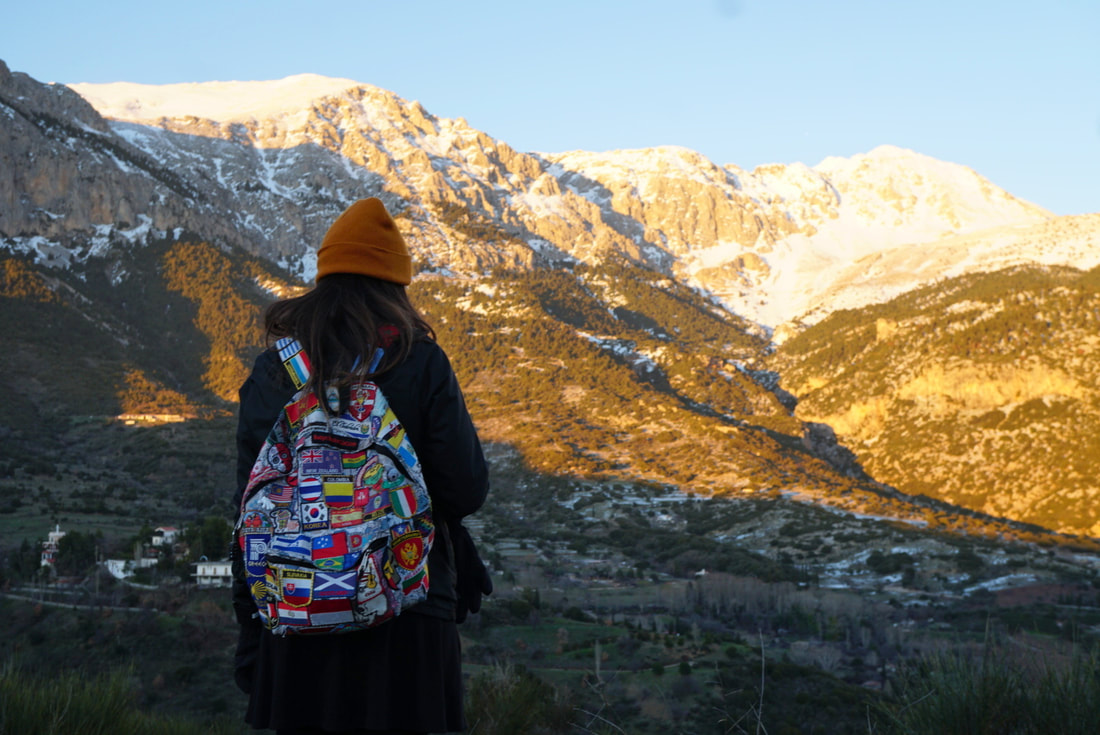 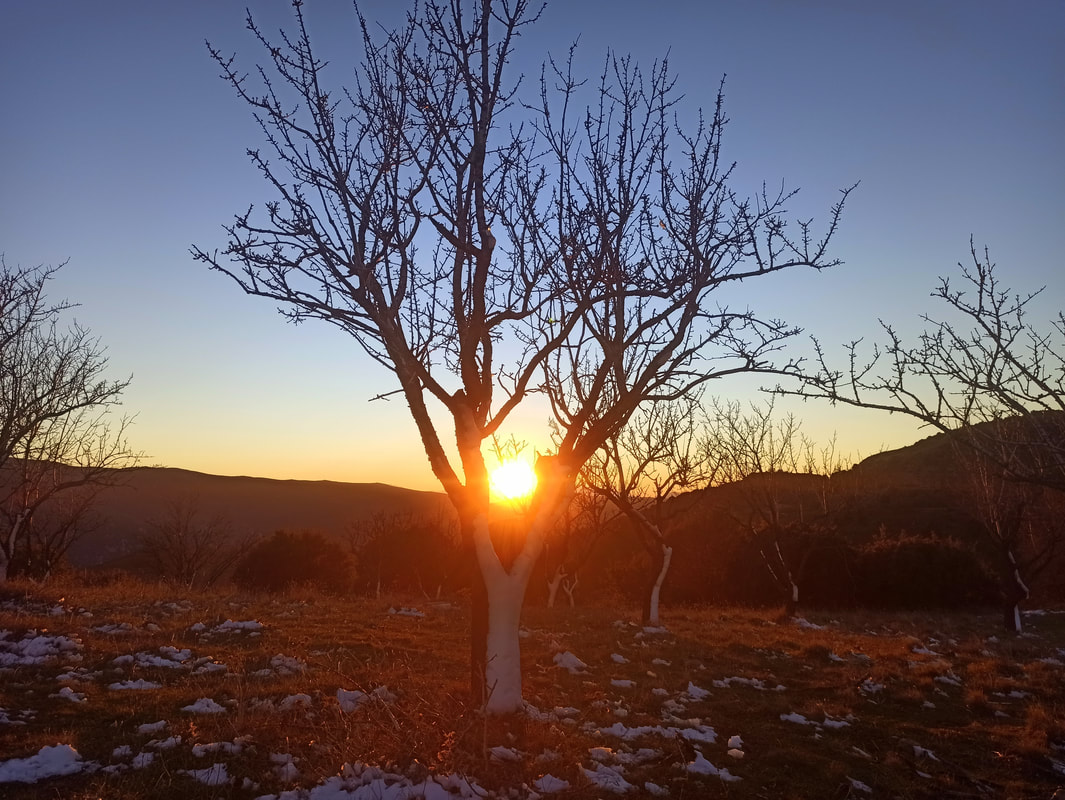 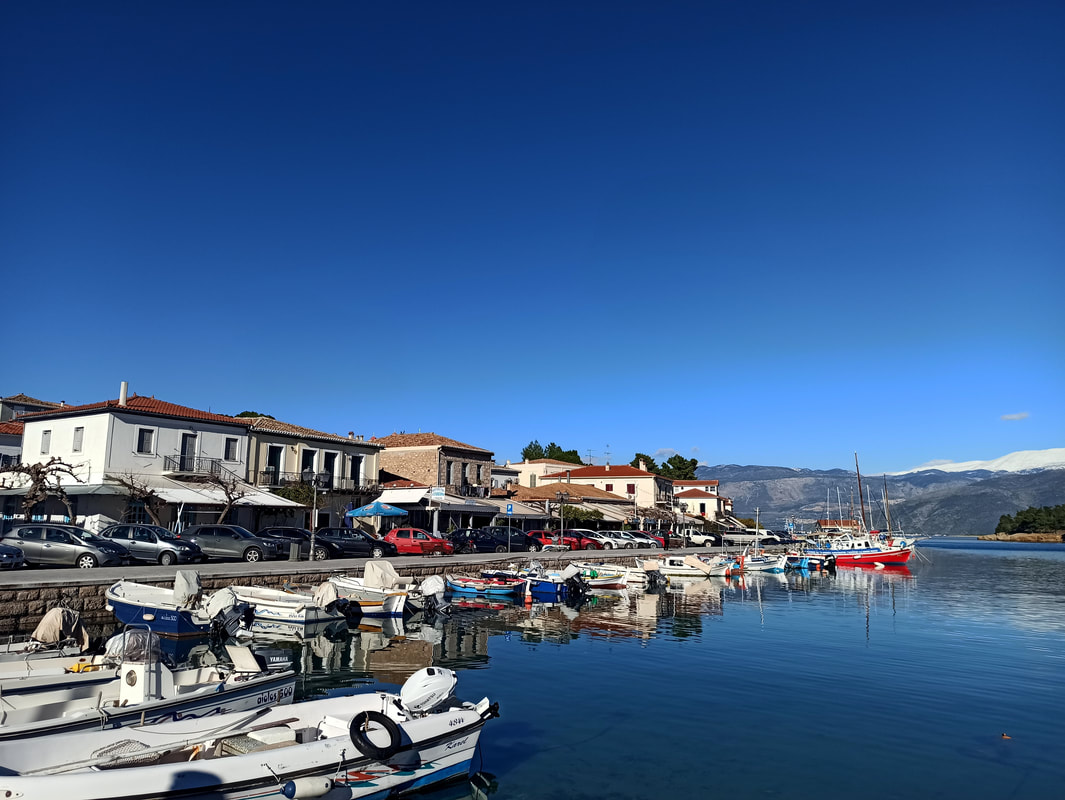 * As described in the “History Recap,” this name is very controversial and still a topic of political debate. Macedonia is the name of a northern Greek province, North Macedonia the official name of the country. However, if you use “North” before the country-name, you profoundly insult the local population of (North) Macedonia. On the other hand, if you are in Greece and use the word “Macedonia” to refer to the country, you will not make any friends. The solution is to refer to the country as “North Macedonia” while in Greece, and change to “Macedonia” while crossing the border.
In order to support the travelers’ community, I spend many hours per week to adequately document all information and advices for prospective visitors, accompanied by a (hopefully) entertaining insight into my personal observations and experiences. This service is and will remain free. However, if you voluntarily want to make a contribution and support my travels and thus the creation of new stories and information supply, here is the button you’re looking for:
Donate
Related:
​- Explore Cyprus: Check out the Cyprus Nature, Cyprus Top-5 Cities and the North Cyprus Blogs!
​​- Check out Budget Bucket List's FAVORITE HIKING DESTINATIONS worldwide!
- Visit Balkan's finest: Montenegro's National Parks Blog, Kotor Bay & Lovcen NP and Cetinje, Podgorica, Prokletije NP and Montenegro's Coastal Towns Blog
- 10 typical Dutch celebrations no traveller should miss out on
​​- History preserved: Time capsule of Romanian culture Maramures
- The 3 golden rules to travel Sofia on a budget! & Why you shouldn’t miss out on Plovdiv! [Bulgaria]
- Where modern meets classic: Vilnius, Lithuania
​- 8 ways to save money in Vienna, Austria
​​- German gems: Aachen & Frankfurt am Main
​- Europe's best skiing & hiking: Get your ass over to jaw-dropping Switzerland!
​- Budget Bucket List hitchhike trip to... Kosovo!
- Unravel the mysteries of Serbia
​​- Discover the splendours of Turkey: Istanbul on a Budget & Reasons to visit Edirne
​- Read about Bosnia & Herzegovina: Mostar, Blagaj, Trebinje, Sarajevo, Jajce, Banja Luka and Sutjeska National Park (incl. Maglic Peak - the country's highest!)