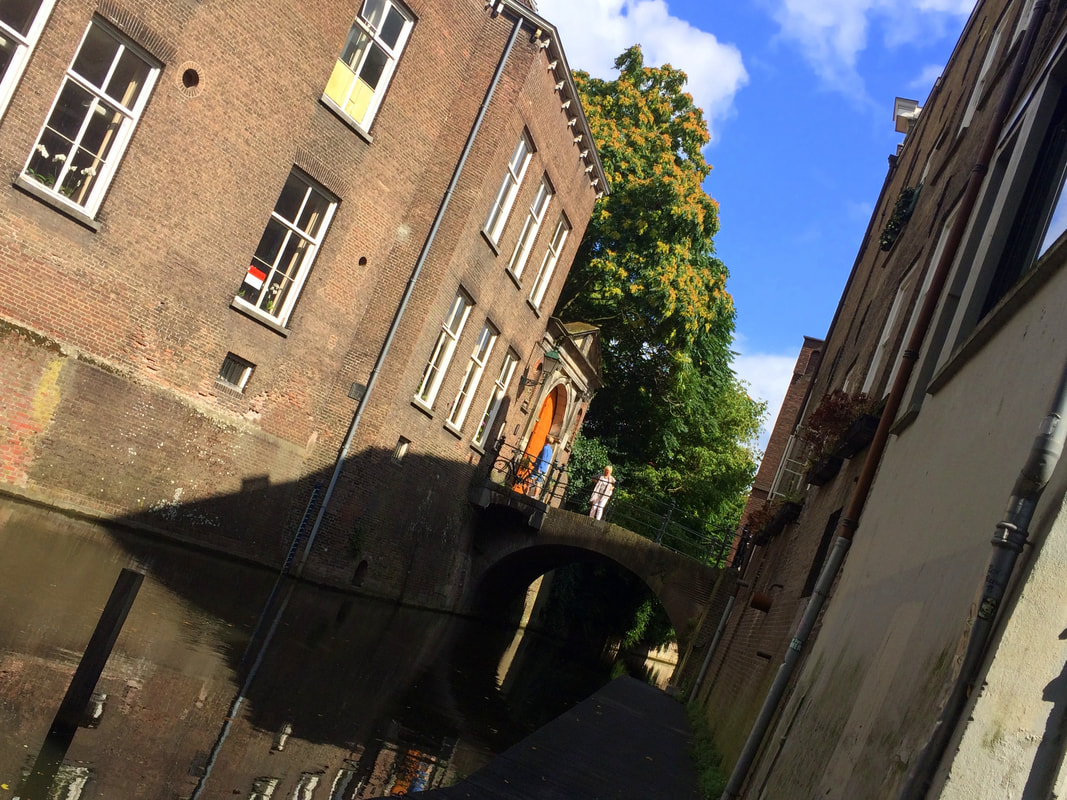 Tourist in your own country, they call it.

But as I’m officially not even a citizen of the Netherlands anymore, that makes me just a tourist. Even though I know this country from the inside out, every gem and every horridness, that doesn’t mean there’s nothing left to discover or re-discover. 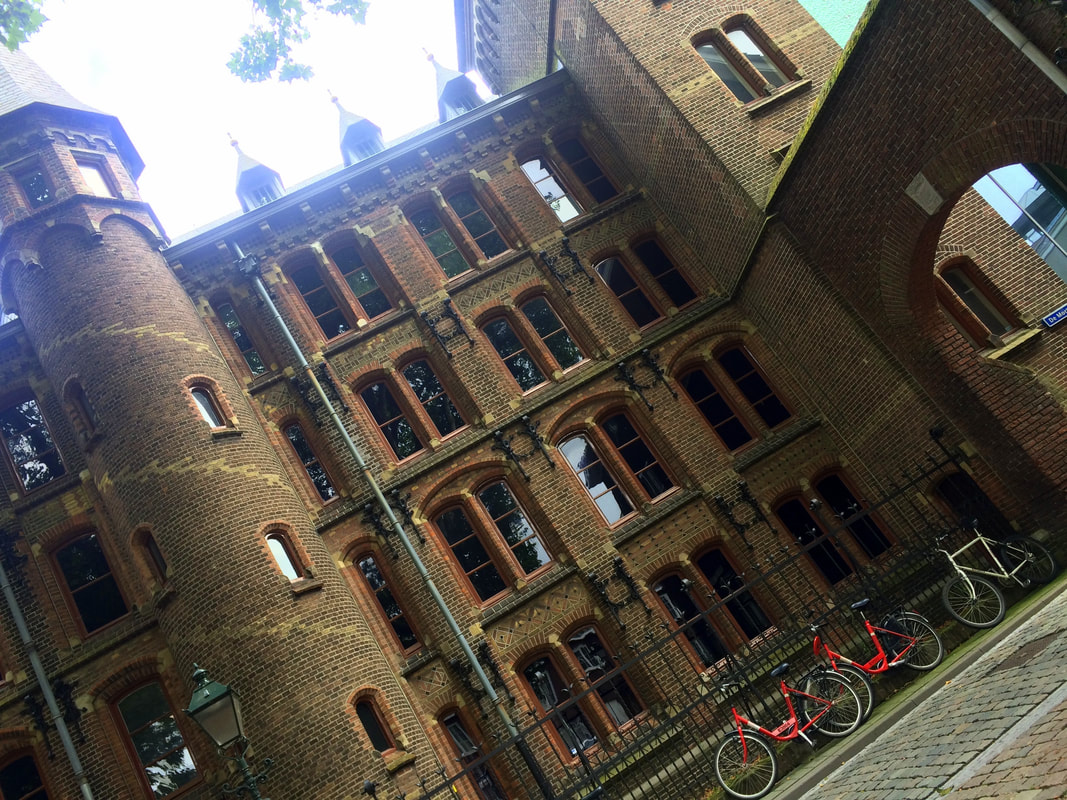 Take ‘s Hertogenbosch, solely called Den Bosch by nationals... A jaw-dropping historical center, a varied supply of stores for the fervent shop-a-holic, a cozy Burgundian nightlife and (hurray) a thrilling offer of museums of all kinds! Not that I was going to enjoy any of that last category that day, as I took along my 17-year-old cousin Aniek and 17-year-olds think museums are lame. Unless you were that weird kid. Unless you were me. But as my family can enjoy my appearance only once every 1,5-2 years I decided to make this day all about her, which turned out for the best as subjectively speaking, she’s a pretty damn awesome kid. ​
​So after I survived the heart attack of spending my hard-earned cash on the ridiculously priced Dutch railway system (30 euros per return-ticket of a 1-hour trip! Driving completely alone in a car is cheaper! Flights are cheaper!), we arrived in the capital of daytrips. As I assumed the one thing a teenage girl wants to do is roaming the chick-outlets full of unethical mass-produced clothing and plastic jewelry I told her she can go ahead and get herself some late birthday gifts. But to my pleasant surprise she grew tired of that one store later… she wanted to do something more substantial. That’s my girl!
* 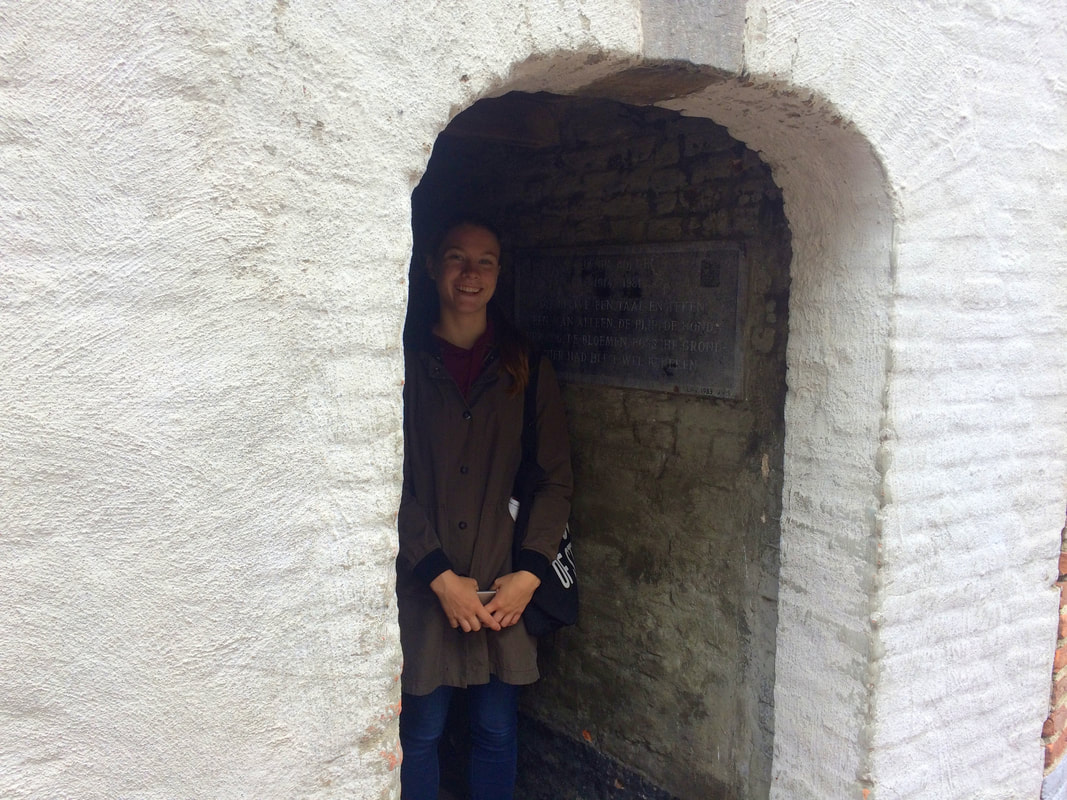 I grabbed her by the arm and told her about the last time I went to Den Bosch as a teenager just like her, when I did a downtown scouting expedition along the historical highlights and less obvious details. When I was saying it out loud I realized how mind-numbing boring I must sound and mentally prepared for the necessary eye-rolling… but I forgot, she’s a very engaged member of the girlscouts and she loves that kind of stuff! So after I sneakily copied the clue-overview from the town’s tourist office (I think I already paid enough that day) the hint-hunt was on!
Here you go! (in Dutch though)
​
We kicked off at the statue of the ‘immortalized couple’ at the Visstraat / Brede Haven intersection and followed our clues along hidden chapels and obscure art at the scenic Vismarkt, full of fragrances of the Bossche gastronomy and typical Dutch ‘gezelligheid’, a concept that’s so local there’s simply no translation for it (altough the Danes have something similar called "hygge"). We followed the Dieze river that provides an underground waterway full of little boats, allowing the curious among us to discover the hidden beauty of the city that lies underneath. ​
We passed wildly decorated buildings dating back to the 15th and 16th century until we reached the Mariën Bridge, looking for façades indicating professions that have long vanished in our modern society. The clues sent us to hidden parks in between historic houses, offering little oases of green right in the middle of the hustle and bustle of the city center. But how green Den Bosch really is was shown to us right after, when we arrived at the Bossche Broek: a nature reserve directly bordering the urban area! The best of both worlds! If I have to indicate one specific point where Den Bosch conquered my heart, this defining moment is probably it.
We crossed the street and marched back into civilization again to find the church rising above the Kruisbroedershof, where finally all these years of hitting the books of Latin came in handy in order to solve the next clue. We continued to the Stedelijk Museum full of the most sublime and most prominent of our national art scene. The glimpses from the building however… in one word spectacular! Dutchness in its best shape. 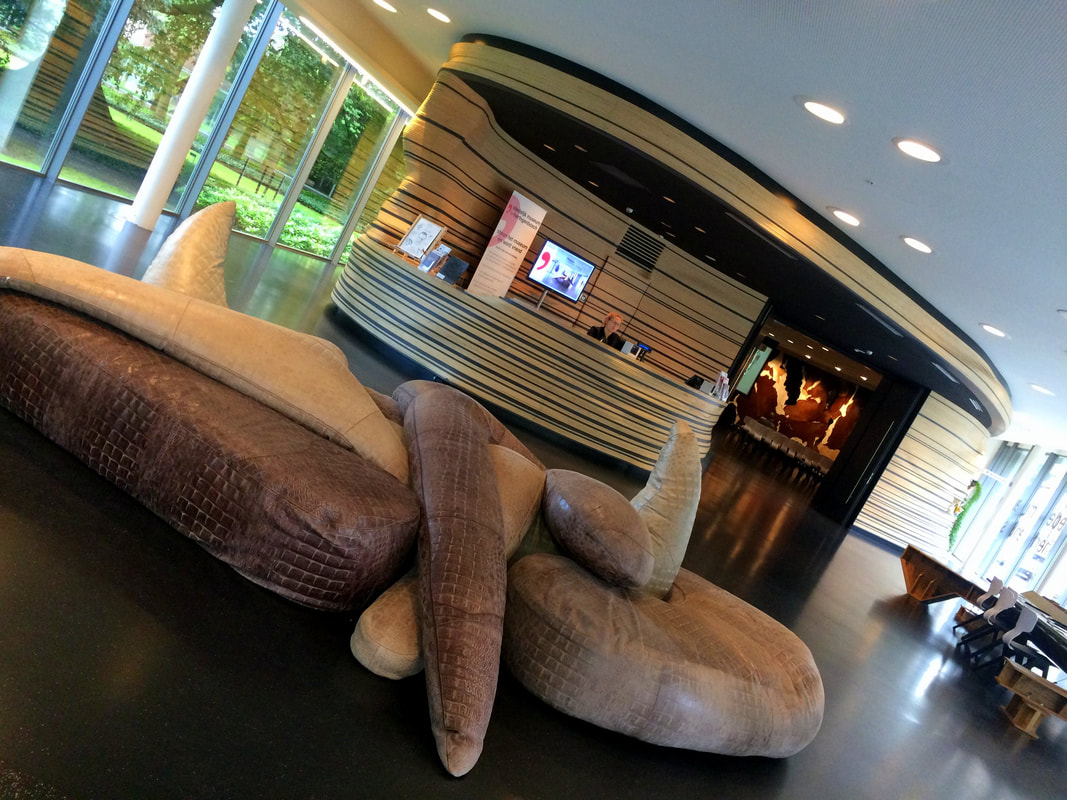 We arrived back at the humming boulevards of the city’s heart where streets have funny names like Achter Het Wild Varken (Behind The Wild Pig) and Klein Lombardje (Little Lombard). Via obscure backstreets, where the loud muttering suddenly fell silent, we uncovered poetry on the walls and hidden monuments of the ordinary men that once built a reputation they’re still quietly remembered by. Just like Janus Borghs, named Janus Kiepoog because of the deformity in his face, who was known for walking around with his dog and tobacco-pipe during the period of Carnaval, a celebration more relevant and widely celebrated in the south of the country than Christmas or Easter. 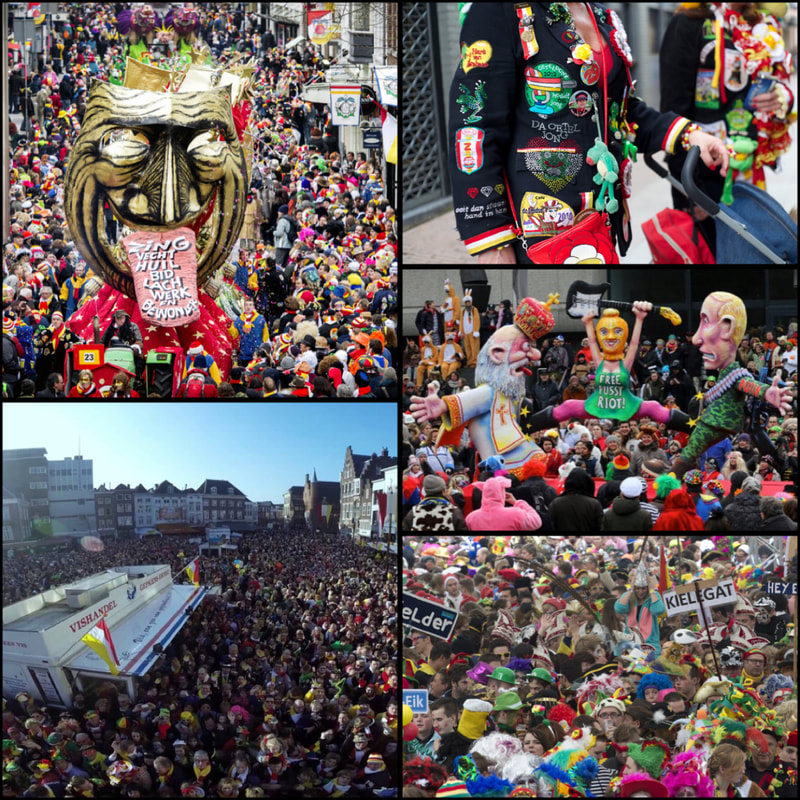 Den Bosch is called 'Oeteldonk' during carnaval season
​
We ended up at the Main Square, which, (mis)fortune has it, was currently the décor of the yearly funfair. Out of the corner of my eye I gauged the face of the youngster next to me, in order to estimate if I was about to board one of those nauseating rotating-until-your-stomach-comes-out-of-your-nose-atrocities any time soon.
“Oh man, I hate this kind of trashy funfair stuff, let’s continue and look for more clues!” my angel shouted, and a load fell off of my shoulders. Relieved I followed the Fonteinstraat leading to the Noord-Brabants (the province) Museum, where we learned a fire destroyed most of the inner city in 1463, facilitated by the thatched roofing that was standard with houses in this century… until that event, needless to say.
​
We reached the Zuidwal, what used to be the defense wall of the city and is still there for us to admire, decorated with art and hocus pocus poetry. ​ 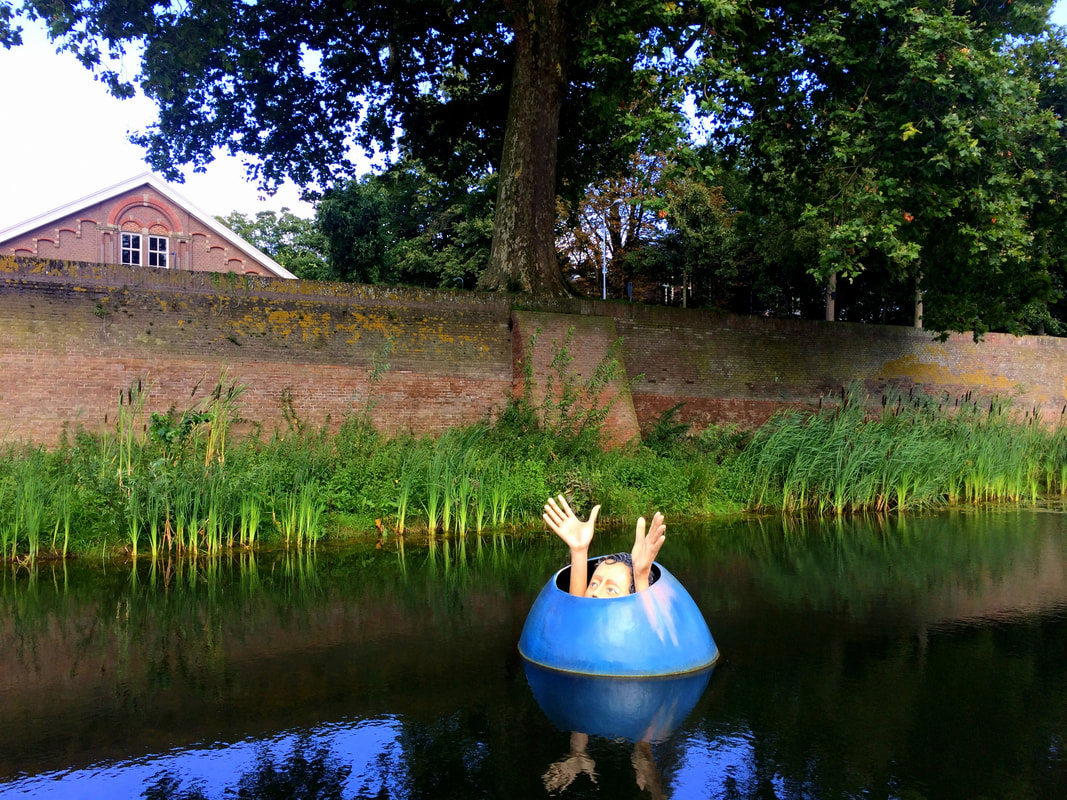 We almost reached the end of our quest, descending from the Gasthuisstraat to another picturesque gateway of the Dieze, flanked with a fountain of a peeing boy… not much unlike the famous Manneken Pis in Brussels himself. 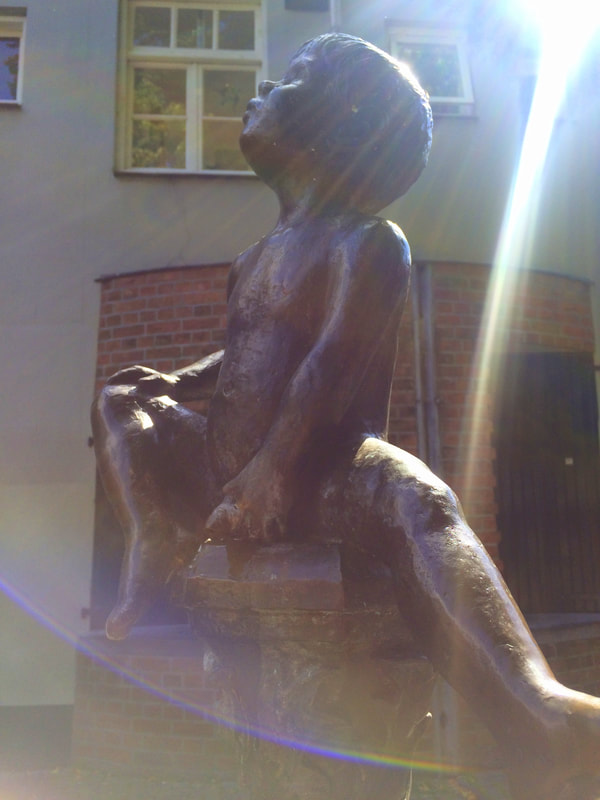 Only to finish at the undisputed highlight of the city, both in absolute height and in impressiveness: The free-to-enter Sint Jan Cathedral! The richness and both absolute and mindful value of this immense structure is of a degree unleveled. Worth the visit of Den Bosch in itself!
​We concluded our delightful journey at one of the many locally owned bakery ‘n bistro’s, as I didn't have the heart to let my little cousin leave without having tried the famous Bosche Bol… a chocolate-coated bun filled with whipped cream. Because she’s young and doesn’t get fat yet anyway. 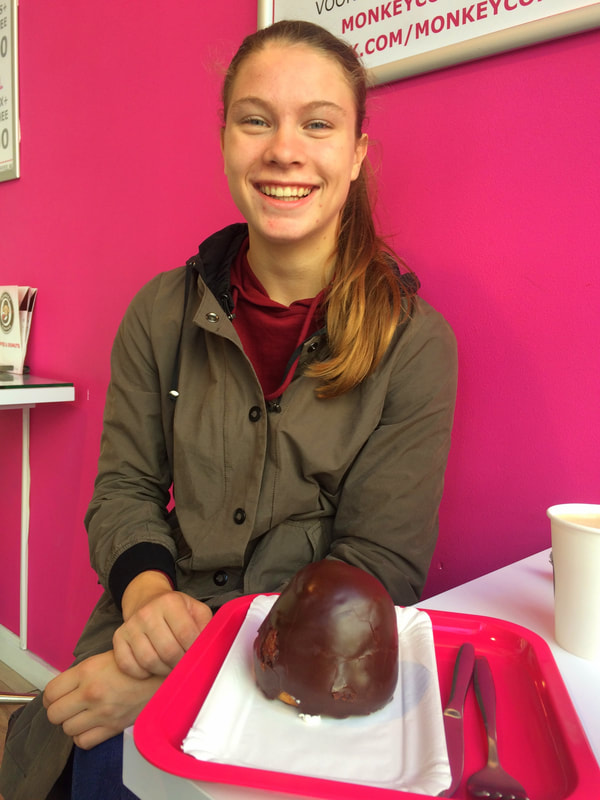 ... and this was me with her mum, in the time that we didn't get fat yet either! 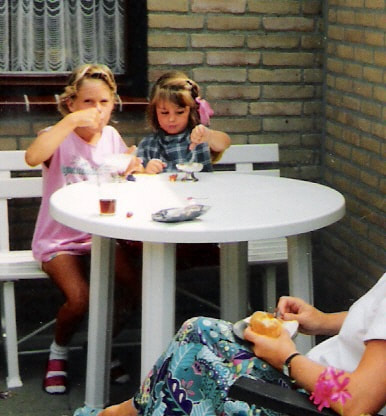 With the corners of her mouth brown and creamy she smiled at me. “I loved today. We can go to a museum of you want, it’s okay.” Love is a complicated concept… not so much described by direct words, but by indirect clues like this one giving a slight hint of what it contains. ​ 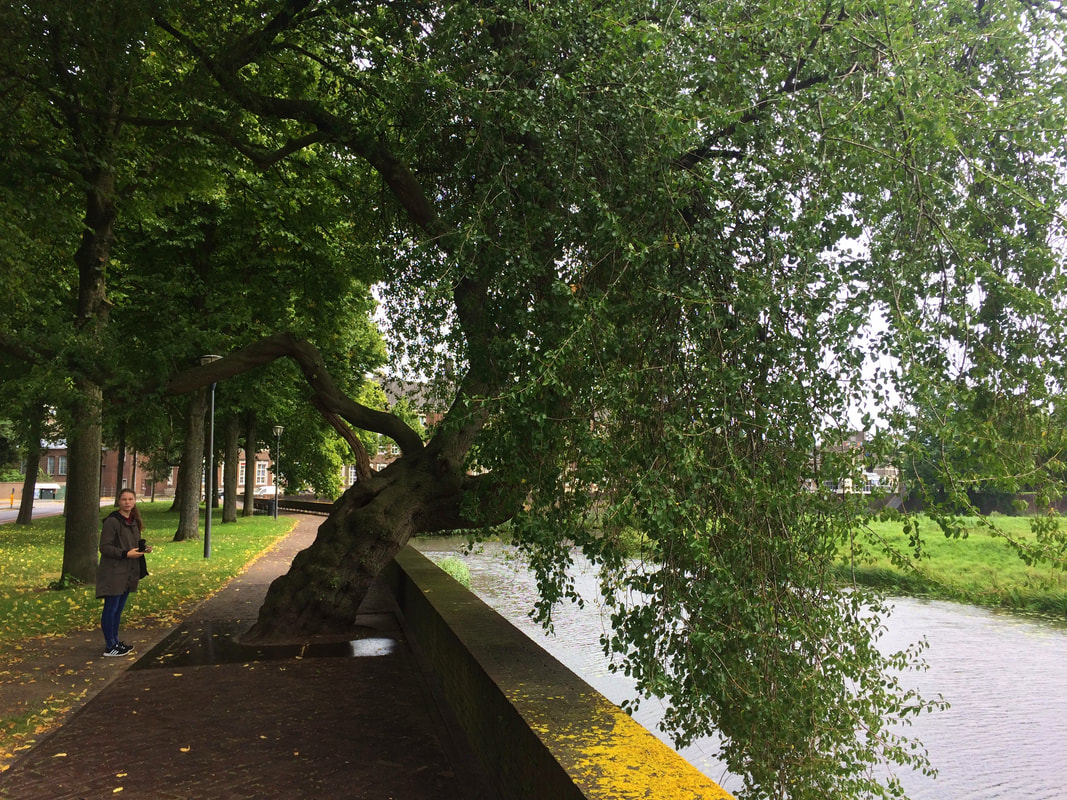 In order to support the travelers’ community, I spend many hours per week to adequately document all information and advices for prospective visitors, accompanied by a (hopefully) entertaining insight into my personal observations and experiences. This service is and will remain free. However, if you voluntarily want to make a contribution and support my travels and thus the creation of new stories and information supply, here is the button you’re looking for:
Donate
Related:
- 10 typical Dutch celebrations no traveller should miss out on
​- My favorite city in The Netherlands: Haarlem
​- 3 reasons why you need to visit Nijmegen [The Netherlands]
​​- Top-5 places to visit in South Limburg [The Netherlands]
- Darkness in the city: a metal festival in Leeuwarden, The Netherlands
- Citytripping in Denmark's capital: Copenhagen
​- Discover Romania's enjoyable cities: Bucharest, Brasov and Cluj Napoca
​​- The prettiest historical town in Romania: Sighisoara!
​​- History preserved: Time capsule of Romanian culture Maramures
- The 3 golden rules to travel Sofia on a budget! & Why you shouldn’t miss out on Plovdiv! [Bulgaria]
- Where modern meets classic: Vilnius, Lithuania
​- 8 ways to save money in Vienna, Austria
​​- German gems: Aachen & Frankfurt am Main
​- Europe's best skiing & hiking: Get your ass over to jaw-dropping Switzerland!
- A capital surrounded by scenic little villages: Lisbon, Portugal
​- Discover more Belgium: Antwerp & the most kick-ass Flanders itinerary!
​- Budget Bucket List hitchhike trip to... Kosovo!
​​​- Guest Blog 'Kosovo Girl Travels': Travel tips and stories from Kosovo's first and only travelblogger!
- Where city and nature meet: Edinburgh, Scotland
- Unravel the mysteries of Serbia
- Spanish citytrips: Barcelona, Malaga & Sevilla
- The modern delights of Frankfurt am Main, German
​​- Discover the splendours of Turkey: Istanbul on a Budget & Reasons to visit Edirne
​​- Diving into Malaysia's history: Melaka
​- Korean culture at its finest: Explore Gyeongju!