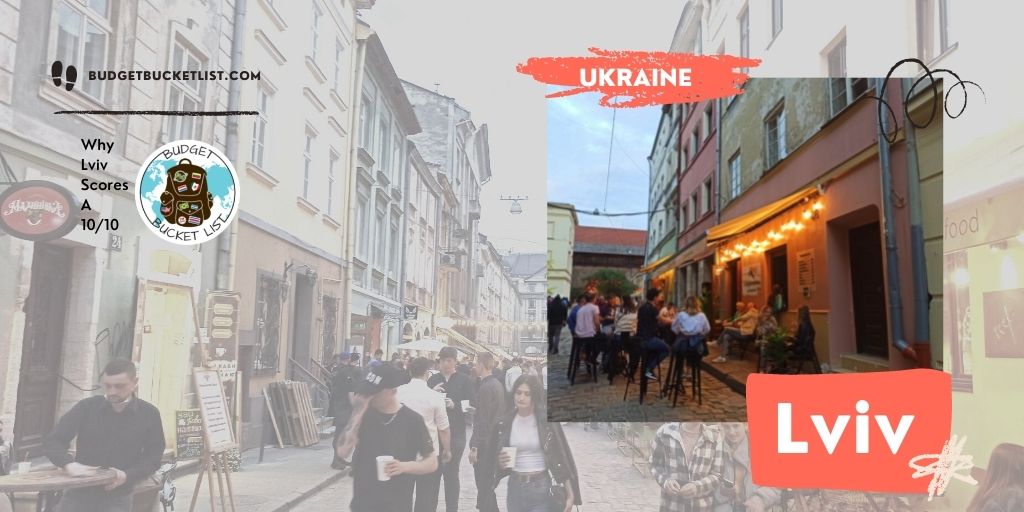 It was quite a long haul from Kyiv: a 7-hour train ride, to be exact. But Lviv was on my list and I wouldn’t take no for an answer. Why? Because they are the proud home base of the Beer Belly Monument, for one, and on top of that, they have a masochist penis statue*. Sold! Count me in! Furthermore, I was told it looks like Poland and I like Poland (I like Ukraine too – so best of both architectural worlds I’d say), they do coffee very well and the people are strikingly good-looking.
Allow me to elaborate… 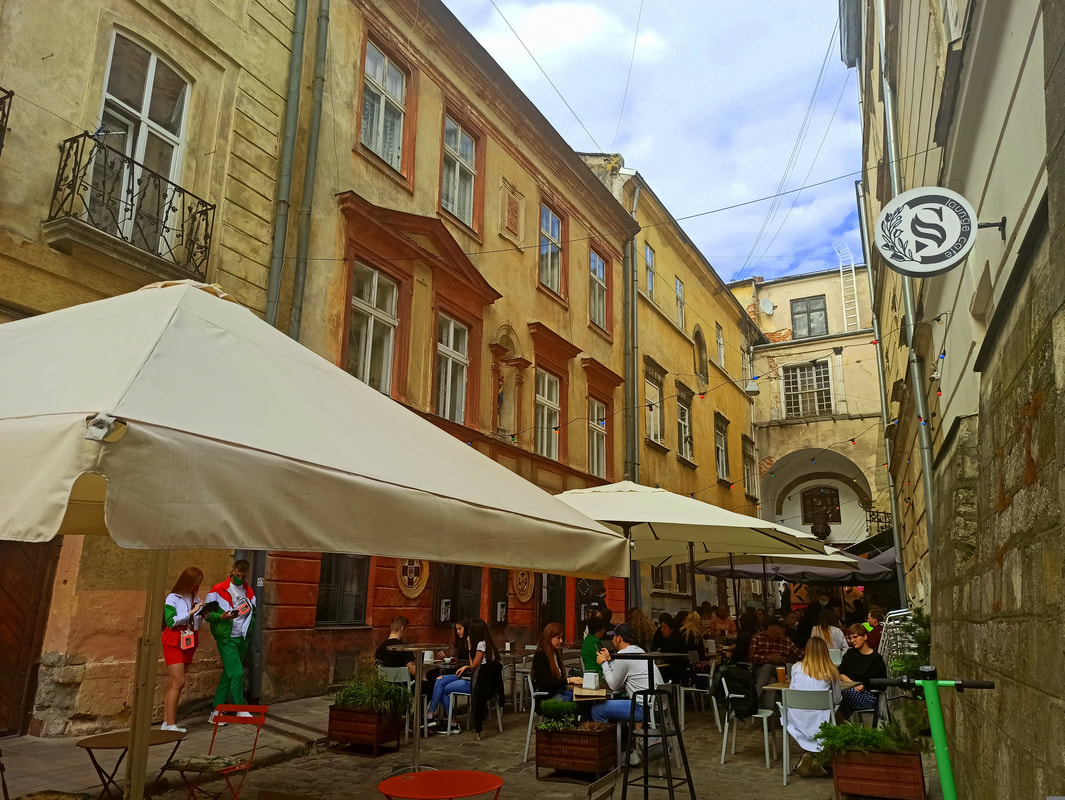 Save this article for later!
​Save on Get Pocket | Save in Browser Bookmarks| Save on Instapaper
Why Lviv scores a 10/10:


Point 1: Their monuments are ridiculous and I love it
​
Quick, the first word that pops into your head when I say “the pleasures of life”! Some might think of alcoholic delights… other minds might drift off to raging orgasms. In both cases, Lviv agrees with you. I consider myself a lover of the arts and I can guarantee I have seen some eyebrow-raising shit, often listed under the modernist or avant-garde category. However, a gilded beer belly? First time! Under the title “Korolivska Brewery Beer Navel of Ukraine” this glorious lump of hairy beef shines up from the cobble stone streets to any observant bystander.

It gets even more absurd. You might have never heard of Leopold von Sacher-Masoch, a novelist born and raised in Lviv when it was still called Lemberg, as a part of the Austrian Empire. However, you might be familiar with the concept of masochism (SM), which is a concept first described, explored, and outlined by this very writer, a passionate masochist himself. It turns out that he was born in the wrong era or simply ahead of his time, as while he received primarily repulsed reactions on his perceived “perversion” and “sexual anomaly”, nowadays his statue graces the streets of his hometown. A very special statue, I must say: if you slide your hands in his pocket, you can wrap your fingers around his tiny dong. It’s an experience. If that invites for further exploration, you can head into the bar for a refreshing slap of the whip by one of the waitresses, or allow them to pour some hot wax on your genitals… I was told by a friend.
[The Beer Belly is located in a small alley just off Rynok Square, in front of the Korolivska Brewery. You can touch Leopold’s penis in front of the Masoch Café.]


Point 2: They don’t screw around when it comes to coffee
​
I’m not gonna lie: I judge a person, company, and why not, an entire city or country by their coffee. A person that brews a weak cup? Must be a push-over! A company that doesn’t have a decent coffee machine on the premises? Zero respect for both the clients and employees, that much is clear. And an entire geographical area that has the balls to serve you Nescafe when you clearly ordered a cup of coffee? Seriously reconsidering my travel plans. None of these distressing concerns in Lviv, though! Hell no! Not only do they have a wide selection of refined coffee bars and cafes on literally every corner, the one even swankier than the other, they also further please you with the existence of Kopalnia Kavy, the “coffee mine”: A heavenly place where one can see, smell, and of course taste all phases of the creation of our liquid black gold. And even better: You can do so while enjoying live music on one of the multiple stages I stumbled upon when getting lost in this massive labyrinth of an establishment. A free museum in the most enjoyable and mouth-watering manner imaginable.
Point 3: Local architecture? Nailed it!
​
I was told that its architectural character can be compared to Poland… which makes total sense, as it basically was Poland, once upon a time: When the area was still referred to as Galicia-Volhynia (1200s) the city received an influx of Poles from Kraków due to a widespread famine, to in 1300s be incorporated into the Polish Kingdom after a short Hungarian occupation. In the meantime, while the major chunks of what is now Ukraine took on the orthodox faith, the conversion failed miserably in Lviv as the rich and noble weren’t down (they even poisoned the poor bastard who made the first attempt: Boleslaus of Masovia from the Piast Dynasty). Church-wise, that’s kind of a shame, as to me those Ukrainian brightly green-, blue- or pink-colored chapels, with their shiny tops of gold and silver, beat the hell out of those rather boring gothic ones the Catholics and protestants came up with and can be found literally everywhere else in Europe… but hey, they truly make up for it with everything else the city offers. Think castles, ancient city walls, medieval towers, and fine cobble-stone streets… on them the vivid movement of students, tourists and shouting merchants… the kaleidoscopic patterns of these “babushka’s” headscarves pulling your gaze away from their wares: eggs, herbs, and of course home-made kefir. Eye-pleasing components turning Lviv into that typical “feel-good” town, with a taste for history and local tradition, to be found and appreciated by a younger and more modern generation. 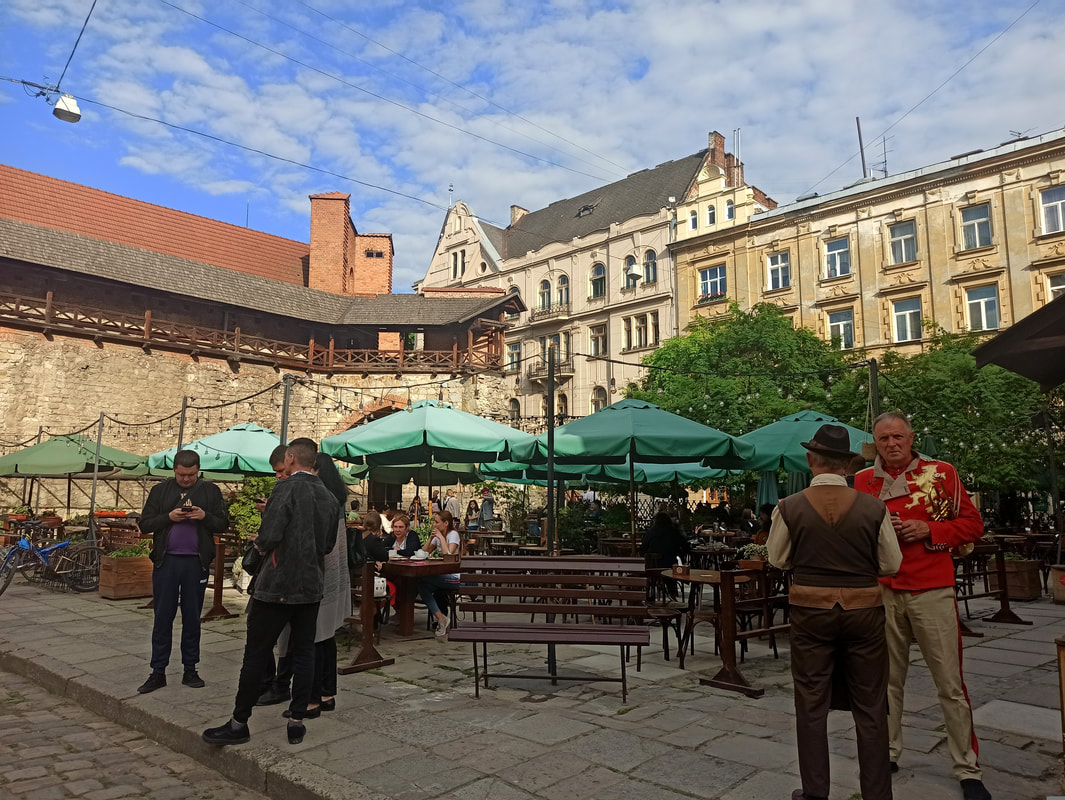 Point 4: Apparently they have some museums and art

Apparently. When Google listed a National Museum, Pharmacy Museum, Arsenal Museum, an Art Gallery, Modern Sculpture Museum, an Ethnography Museum, and even some underdogs such as the Horseshoes Museum and Mermaid of Dniester Museum, I was thrilled. For no reason, as it turns out. I visited Lviv in covid-tormented times, and although it’s totally fine to breathe the air shared with hundreds in the mask-less nightclubs or public transport vehicles, a museum turns out to be the prime spot to catch the ‘rona, according to local policies. I made a fair attempt, but got confronted with a series of closed doors. I wish you better luck.

To me, the power of a city is magnified by its proximity to nature. If I cannot easily reach a forest or national park for a swift little daytrip, I get claustrophobic. You’re reading an article on Lviv, so needless to say this is the moment to tell you this is one of this city’s magic features. I’m not only referring to the most alluring mountain range of Eastern Europe, the Carpathians, as well as Skole Beskids National Park at only a stone’s throw away, but also to Lviv’s own mountain peaks: Lysa Hora, Góra Wilcza, Kortumova, Babin Klin, Wysoka Góra and Chervony Kamin’. Hiking opportunities aplenty. Well played, Lviv, well played. 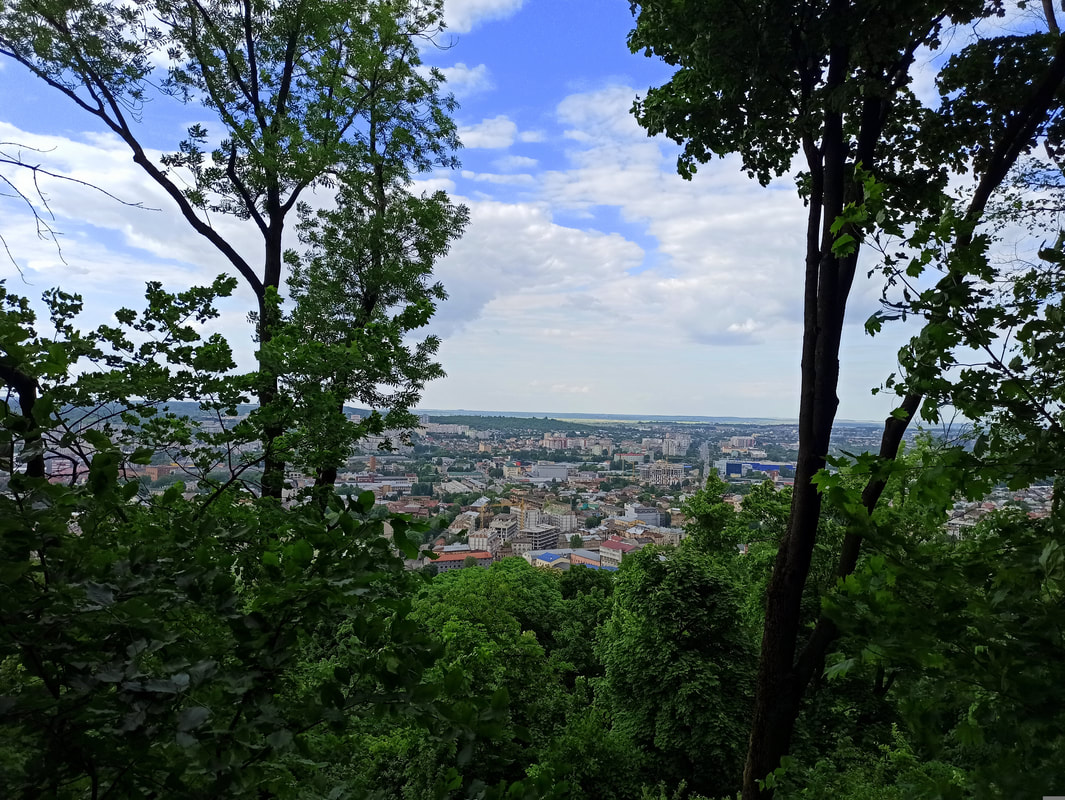 * Find a collection of Lviv hiking trails at Wikiloc.


Point 6: Look at them look-out points!
​
Talking about mountains: that obviously means that a proper bird-eye view is never far away in Lviv. Sure, you can hike that mountain to get that fix, but there are options. For a small fee, they’ll allow you to get up to the clock tower in the town hall for a bit of a panoramic observation of the city that surrounds you. Even better: you can get up to the Lviv High Castle ruins, with 413m the highest point in the city and therefore the most solid look-out point in town… whilst standing on a piece of local history, thank you very much! Other, be it less epic, alternatives include the restaurant of Hotel Dnister, the top floor of the Magnus shopping mall, the courtyard of the St. George Cathedral, the entrance to the St. Michael church and the Pahb Slavy park behind the WWII Soviet cemetery.
Point 7: There’s an active traveller and Couchsurfing scene

What’s even more fun than connecting with fellow adventurous (long-term) travellers? Linking up with locals of course! You can observe the unique sights of a place, wander its streets, and taste the native cuisine and flavors… but the true core of culture lies carefully hidden within its people. Their traditions, believe systems, religion, habits, perspectives on history and politics and certain ways of thinking and behaving they might not even be aware of, but you notice as an outsider. To me, Couchsurfing, and in a lesser degree homestays via Air BnB, are the perfect tool to facilitate such experiences. In Lviv I hit the Couchsurfing jackpot, as to me staying with Osyp and his cousin/sister* Tatiana didn’t just add to the experience, it turned it into one I will remember. In a life of traveling sometimes different places blur together into one memory, especially cities… but it’s the people you meet that stick and give a certain meaning to a location.

* This is the same word in Ukrainian, funnily enough. Just like in Dutch cousin and nephew/niece are the exact same word.
Point 8: The people (read: women) are gorgeous
​
Of course, it’s the inside that counts. That part is all well in Ukraine though: The heart-warming hospitality and helpfulness towards a foreigner, even through language barriers, is something I will mention to anyone who’d ever considers visiting this country. All of those great personalities and kind spirits come in a very nice package though! I must add I am exclusively talking about the women of Ukraine… which in its turn puts the local men in a very lucky position (I’m sorry, I like long-haired men… the millimetre-shaved-heads which is standard for men here just ruins it by default). Honestly, if I’d live here, I would seriously consider lesbianism as a more plausible option, especially if Lviv would be my home base. I’m not sure if it’s something in the water, but these nymph-like girls with their well-shaped forms, shiny bouncing hair locks and high cheek bones represent a level of beauty that is clearly above the global average. On top of that, they dress like they’re ready for the catwalk. Never ever was I more conscious of my stitched-up dress, wrecked flipflops and dinosaur earrings… traveling properly killed the former fashionista in me, that much is true. 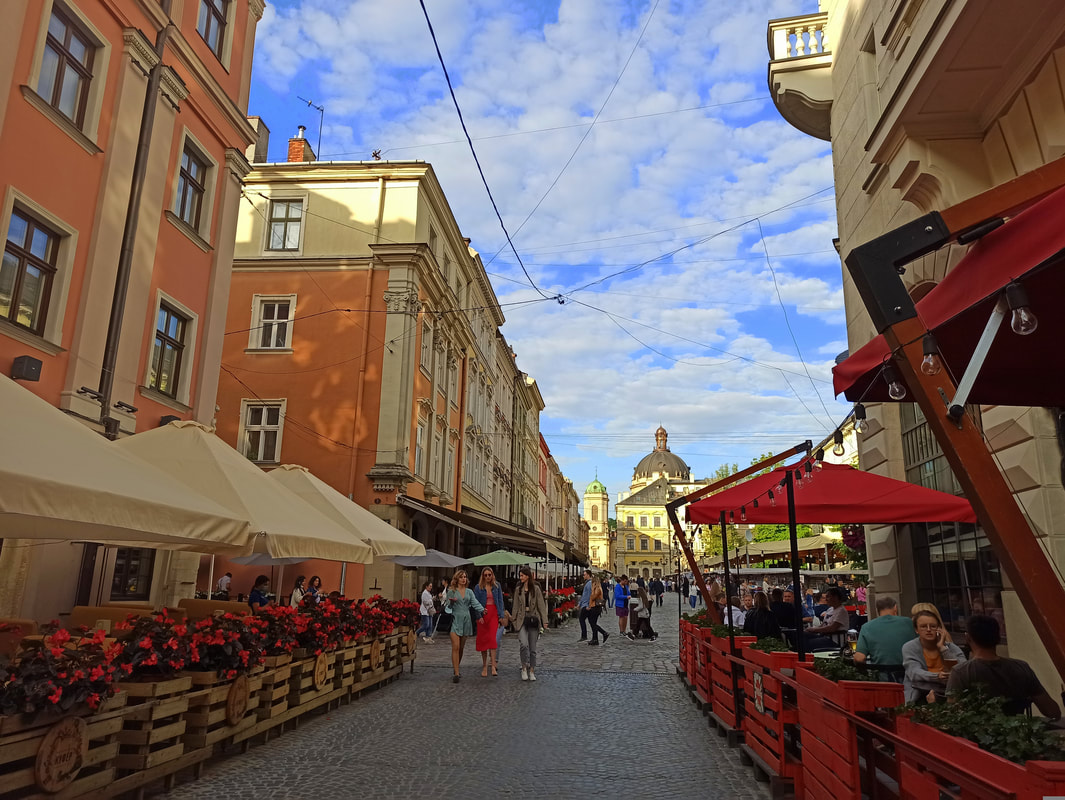 Point 9: It’s very affordable
​
I am aware that I am writing this from a very privileged point of view, having my roots in a wealthy country where I could receive high-end education, always have a job when I wanted one and receive the kind of salary that is a far-fetched dream for the biggest chunk of the world population (even though, by choice, I decided to live a non-luxurious, low-budget lifestyle). That said, most pleasure-driven travellers like us who read travel blogs for inspiration come from a similar background… and that means that to us, eastern Europe is a budget travel walhalla. I found Ukraine especially very budget friendly, with even accommodation options from 3-5 euros per night. Where I normally turn around every cent and weigh my options (as blowing the money I have quickly means I have to spend more time earning new funds, which leaves less lifetime that could be spent on traveling), here everything was a no-brainer. Hostels, food, transport, entry prices… all is just very low-cost!
Point 10: Lviv’s nightlife is smashing!

Talking of which: also going out in Lviv is incredibly affordable. It definitely doesn’t hurt your wallet to give a round to all your new friends here. Regardless, Lviv’s nightlife is an experience on its own, its intimate alleys and charming historical avenues simply inviting you in for a fluorescent cocktail or a good class of local (!) wine. As it’s a student town, you know you can count on a party every night of the week. To me, it was extra special, as after a 1,5 bar/restaurant ‘rona-lockdown it was just a breeze of fresh air (to be inhaled without a mask) to finally celebrate life like all of that was just a bad dream. Ukraine doesn’t do covid.

… which makes me wonder, why am I still writing? I should be out drinking. See you in Lviv!