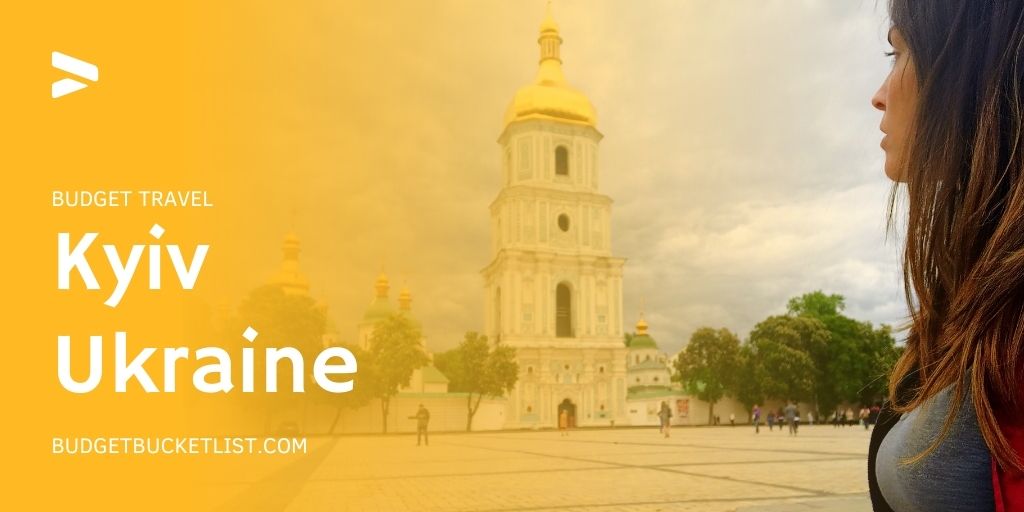 It wasn't easy to get into Ukraine. In the current horrible covid-times we live in, it entailed two separate uncomfortable nose swabs: an anti-allergen rapid test for the transfer in Poland, and a PCR for Ukraine... I had to travel via Poland, as Ukraine is neither Schengen nor EU, and upon my return to my temporary homebase Malta that would go with a 14 day quarantine, even if you're tested negatively or are fully vaccinated (logic is hard to find in these strange times). Fuck that, not doing it. So I had to print a separate entry card for Ukraine to avoid my passport being stamped, as my Ukraine-visit needed to be entirely secret for the same quarantine-related reasons, which also means I needed another two (expensive!) tests upon my return, to avoid having documentation written in Cyrillic raising any eyebrows in Malta. Oh, and even though I have a health insurance and a travel insurance covering all extra health-related costs (both insurances covering covid-related hospitalization), I was obliged to take a third Ukrainian covid-insurance as well (anything to make money!)... foreigners who failed to do so were either refused at the border, or couldn't enter the plane to begin with. In short: this sucks balls.

I must have really strong reasons to get into Ukraine then, right? Nah, not really. I just looked at the map of Europe and picked a random country I had never visited before... which aren't many. Ukraine, why not? I've never met anyone who went for a relaxing summer getaway to Ukraine, so why not be that person?
Save this article for later!
​Save on Get Pocket | Save in Browser Bookmarks| Save on Instapaper
Airport train to centre: UAH 80 - airport bus to centre: UAH 100.
In the city: anno 2021 a 1-way ticket for any means of transport costs UAH 8 and can be bought on the vehicle or in the station's ticket office (punch ticket upon usage), or you can buy plastic swipe-pass that counts for all modes of transport. There are 3 main efficient metro lines, the deepest and cheapest of Europe (with the world's fastest escalators: I almost fell backwards), with metros arriving every 1-3 minutes during peak hours. Above-ground there are trams, buses, line-buses, as also local privately-owned minibuses. Some information is accessible in English, and if not, the people are helpful and despite the language barrier will go out of their way to help you if you just ask. "Black riders" allegedly pay a UAH 60 fine, which is like EUR 2 and therefore represents another very interesting option. Make sure you get out of Osokorky Metro Station to admire the steet art (no need to explore the environment outside of the station here, it's rather depressing, although representing a truthful image about the common living situation of the lower middle class).

Once I had left the airport in the smallest train I've ever seen (see photo) I opened my mind to let the first unfiltered impressions seep in. English? Not spoken at all (some claim to speak German or French - but in all cases over the next 2 weeks this turned out not to be true, once you in fact start a conversation in any of these languages). Prime time to download Ukranian Google translate to make your life a tad easier. Hm, interesting fashion! The fake-brand Adidas training suits, aren't just a Eastern European legend, I saw entire families parading by in this attire... and apparently the mullet is still very much alive - on men, women and children. Ha, no facemasks! And people partying in full bars! Covid's fear politics definitely didn't impress the down-to-earth Ukranians. What a relief after enduring Malta's police force fining sunbathers and swimmers, and closing down everything that gives live that needed extra flavor. And OMG, this country is cheap! Haircuts for EUR 2,50 (you might walk out with a mullet though)... and once I checked hostel prices I was positively suprised to find EUR 9,00 options... it turns out, this was the price for 3 nights. My god, last time I paid that little was probably in Vietnam, in the year 2010. A visit to Ukraine definitely won't break the bank! Also: if I'm going to trace down a holiday-fling, it's gonna be a she. Think jaw-dropping, nymph-like, model-looking women balancing that right amount of elegance and irresistible sexiness, versus chernobyl-looking dudes (honesty is a virtue an old wise man once said, right?). 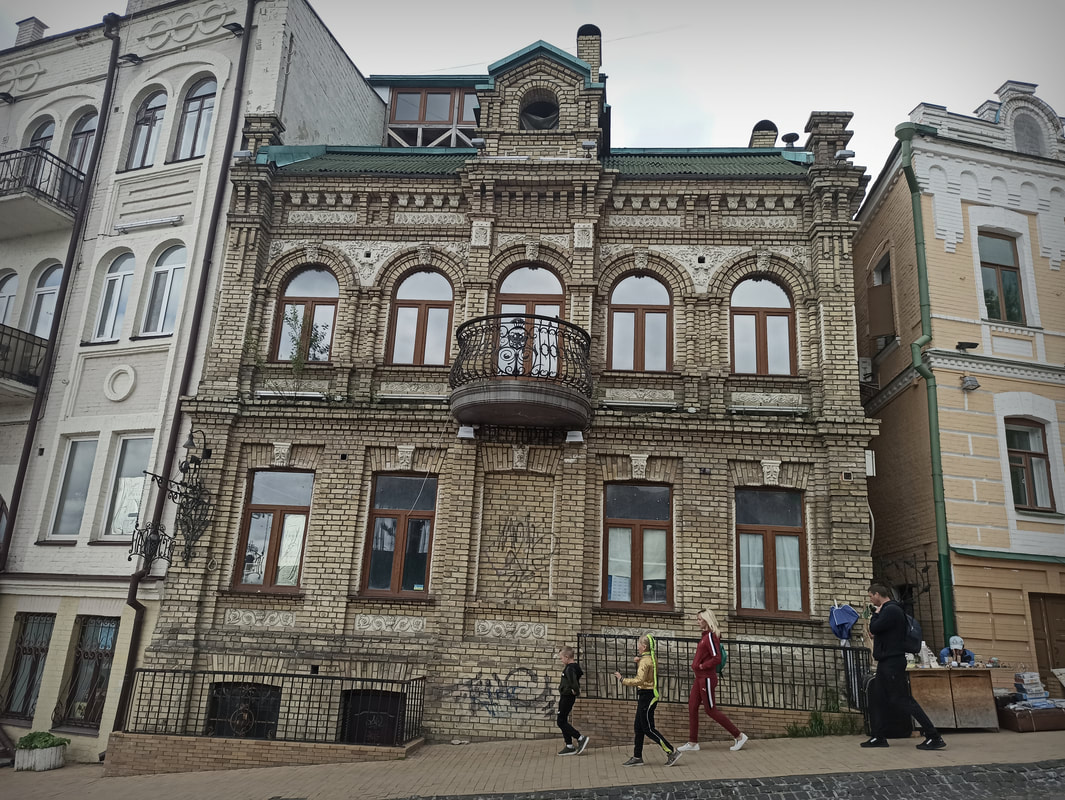 Needless to say, for that price you should expect very little. I had troubles finding the hostel to begin with, as Google Maps kept leading me to this run-down, apparently deserted and squatted building, the cat pee stench captured in the graffiti-embellished cracked walls that seemed ready to loudly collapse any minute now... the type of place you expect emaciated heroine junkies to shoot up in after midnight. This couldn't possibly be it, right? Yes, this was it.
​
Because the hostel wasn't sign-posted, I randomly walked into 3 different living rooms via unlocked doors, only to find Slav families consuming their dinners... undisturbed by the fact that a backpacked stranger was suddenly standing inside of their house. Once I finally traced down the hostel, I concluded - relieved - that the place looked slightly more decent from the inside, although lacking warm water... or properly running water at all. Alright then, no one ever died from a good old army shower! I had opted for the hostel-option to meet up with some fellow travelers, but it seemed a place where mainly locals permanently seemed to live in (in dormitories!), and as such, due to my absent Ukranian language skills not a single word could be exchanged.
​
You can get a private hotel room for 10 bucks, which might be worth the minor investment. 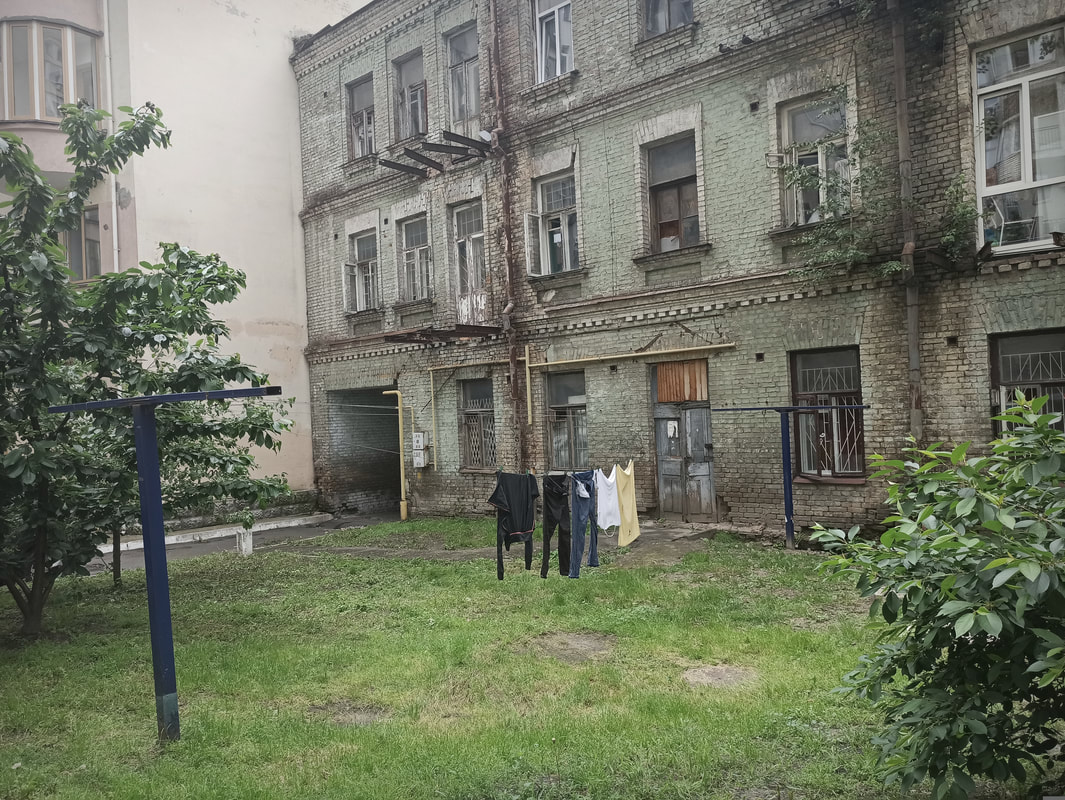 Even though I had skipped almost two nights, and only had the chance to indulge in a few hours of sleep on a public couch in the airport's coffee shop (sleeping anywhere is my secret super power), I decided to absorb all the caffeine I could lay my hands on, and use my scarce time for an urban expedition. Easy in Kyiv, as in whatever direction you look, coffeeshops literally pop up out of nowhere and out of everywhere - triggering a competition resulting in absolute top-notch design and atmosphere, often finding that delightful line between rundown and trendy... just like the city itself. And for EUR 0.50 a cup you can assure I almost drank myself to a mild heart attack.

Through my caffeine-frenzy I let Kyiv work onto my senses... My god, this place is properly weird. If I would be a city, Kyiv would come alarmingly close to my urban DNA. I made my way passed absolutely mental artwork, forcing every sane human straight out of their comfort zone. Some borderline Slav-version of Alice in Wonderland on acid meets hysterically-colored Bolshewist communist folklore. Them churches though, wow: slightly approaching the cognitive image I constructed around the word "Russia", but better. Orthodoxy done well.


PHOTOS: RIGHT CHURCHES
The St. Sofia is a UNESCO World Heritage and quite rightfully so - a must-visit. Other recommendable options: St. Michael & Desyatynnyy.

Besides the mildly unsettling yet stimulating street art, to be found on both sides of the Dnieper River, museums are obviously inextricibly linked to any capital city. The National Museum being entirely free the last Monday of the month... guess when I was there? It was like life wanted me to be here, despite the covid-related obstacles randomly thrown on my path. Expect to find some history, ancient pottery and dino-displays: nothing out of the odinary. It's the Great Terror expo that truly caught my attention, highlighting Stalin's campaign of political repression in the Soviet Union that occurred from 1936 - 1938, involving large-scale repression, ethnic cleansing, widespread police surveillance, imprisonment, torture and arbitrary executions of "undesirable elements." The total estimated number of is between 950,000 and 1.2 million. Though stuff.

The National Art Museum was being restored and therefore inaccessible, but this leads to yet another even more intriguing story. One I'm very familiar with and followed closely. The National Art Museum was damaged during the Revolution of Dignity of 2014, when the people stood up against their corrupt president Yanukovych, with the intention to overthrow the Ukrainian government - yihaaaa, power to the people! More specifically: successive Ukrainian governments in the 2000s sought a closer relationship with the European Union (which would have impacted Ukraine's trade agreements with Russia). Yanukovych continued to postpone, which was interpreted as an attempt to back out of signing this agreement, and led to a wave of protests which came to be known as the "Euromaidan" movement in Kyiv. The protesters were relatively successful (although Ukraine still isn't part of the EU), and the the parliament declared that Yanukovych was "relieved of duty."
As a response, Yanukovych said that this vote was illegal and asked the Russian Federation for assistance, which he received. Also: Widespread protests against the revolution occurred in the eastern and southern regions of Ukraine, where Yanukovych received strong support in the 2010 presidential election. These protests escalated into the 2014 Crimean status referendum, Russian military intervention, and the establishment self-proclaimed proto-states Donetsk and Luhansk -  a conflict which is still going strong today (I researched the possibilities to enter Donetsk and Luhansk, because fuck mainstream tourism - but this was unfortunately not possible). It's interesting how most news sources write in favor of the government and army, stating things such as "18 police officers were killed" - uhuh, and 130 civilians, murdered on their streets. It's easy to guess which side I'm openly on, and the remains of this battle field, such as monuments honoring the "heavenly hundred" (the fallen rebels) and the marks serving as silent reminder of where their bodies once lay, moved me to tears.
​
Kyiv, what a city. It has no chill. 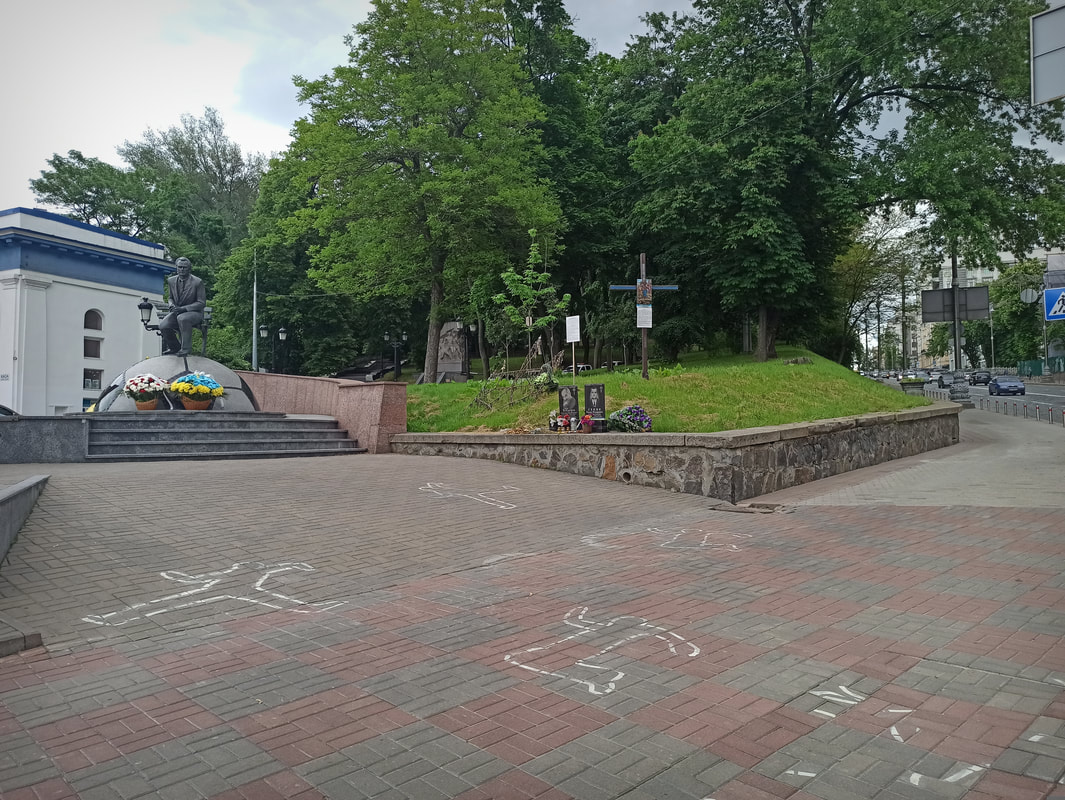 For more digestible museum-material: check out the Naked Room. Oh, and why not: the Baikove Cemetery, the Necropolis of the Capital. People that read my blogs regularly know that I'm hot for the cold, as culture isn't reflected anywhere so clearly as by how the living treat their dead, this one taking the shape of a creepy overgrown forest with metal cages and unsettling constructions accesible by swirling hiking trails, clear photos on the tombs showing you exactly who's rotting away down there, like modern death masks. Black smoke rises up from the ovens located inside of the hills, which would be the backdrop of your picnic with gran: yeah that's right, the Ukranians place actual picnic tables on top of the graves. I can't even... And if that's not enough, behold for crematary building. A diabolic structure from your worst nightmares. I can only imagine the gateway to the burning fires of the abyss must have served as an inspiration for this mentally insane architect.

[For the sights of the story and further recommendations, check out the Free Budget Fact Sheet. You're welcome.