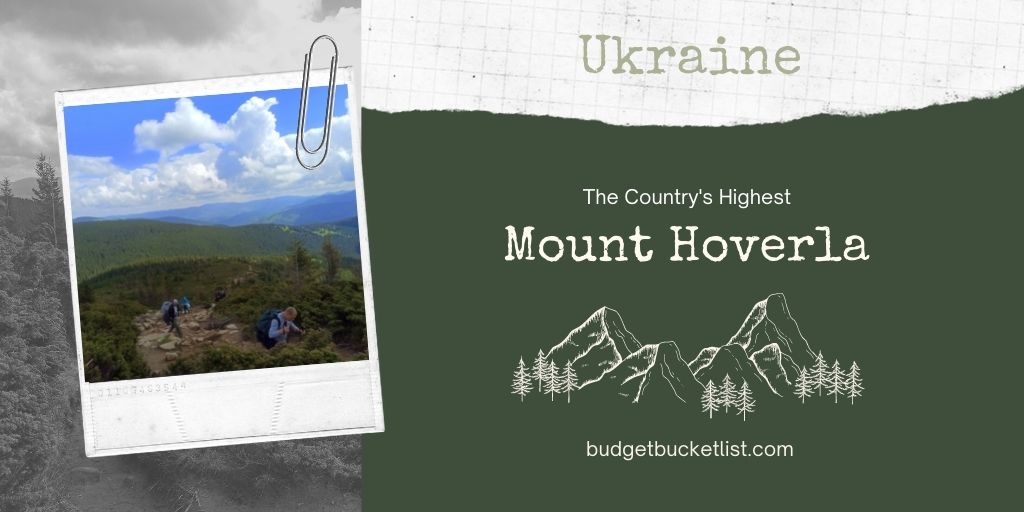 I leaned over my glass of wine to concentrate on the entertaining conversation, the first time after 1,5 years of Covid when I could properly enjoy some good old nightlife… Laughter, shreds of conversation topics, the highest mountain peak of Ukraine, more fragments of dialogues… wait what? Stop, go back: You can't just randomly mention the highest mountain of the entire country over a drink and expect me to not immediately drop everything I'm doing and go over there to climb the damn thing. You know who you're talking to?
​
The next morning I woke up and started packing: On my way Mount Hoverla in the Ukrainian Carpathians!
Save this article for later!
​Save on Get Pocket | Save in Browser Bookmarks| Save on Instapaper
After my amazing Couchsurfing host drove me all the way from Lviv to the pleasant town of Ivano-Frankivsk, we said our goodbyes over a mouth-watering local lunch, while talking about his upcoming trip to the Donetsk and Luhansk region where his presence was required to treat the Ukrainian-favored soldiers (as a dentist). This particularly interested me, as this is the exact location where in 2014 the Malaysian Airlines flight MH17 from Amsterdam to Kuala Lumpur was shot down from the sky by Russian-backed separatists… carrying 283 passengers of which none survived, among them my old neighbourhood friend Erik and his pregnant girlfriend. I don’t always understand my own brain, but the draw of Donetsk and Luhansk is just immense for a person like me and I most definitely would have talked him into taking me there, if I wasn’t so time-constrained on this quick Eastern European getaway (while working a job in Malta)… and, sure enough, if I didn’t have this mountain to climb!

So there I went, instead hitchhiking further down south to a village called Voroktha… deeply tucked away into the countryside, where people don’t walk their dogs, but their cows and goats, and where the colorful houses and golden churches reflecting cloudy skies, sprinkled over the round green hills, are somewhat reminiscent of Hobbiton. I checked into my guesthouse called Trutte, next to the river Prut… which means in my native language as much as “bitches next to the shit-river”, but that aside. In fact, it was a wonderful log-cabin-arrangement, where I got a private ensuite room for about 5 euros a night. This country won’t put any constraints on the travel budget.

An Ukrainian family whom I met during breakfast was kind enough to randomly offer to drop me off at the foot of the mountain, without me even asking. Quite typical, Ukrainians are good folks: open, interested, and always ready to lend a hand to a foreigner like myself. 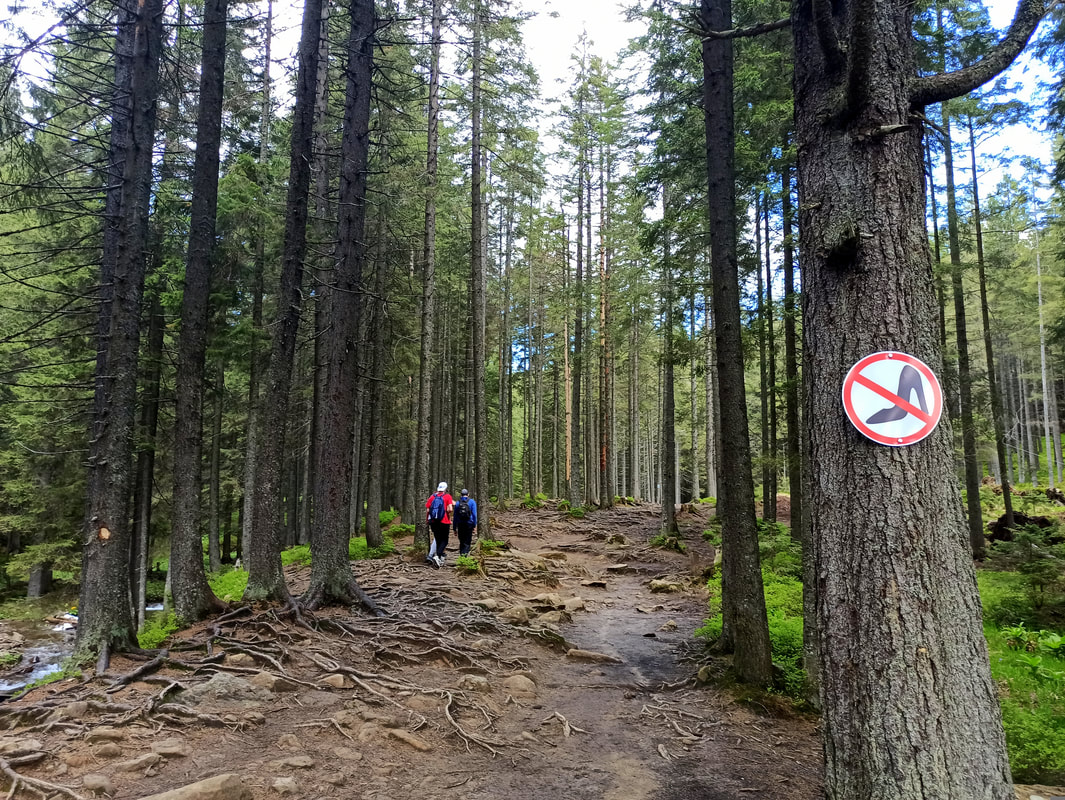 * Pre-warning: Don't trust water sources on the provided or digital maps. There is NO water along the trail. Take at least 3 litres, more on hot summer days.


The fact that a family went there on a weekend trip, as also the trail sign advising visitors to not attempt the climb on high heels, should have been enough of a warning though… I know, I know, 2061m isn’t high at all, and definitely not something I have never done before, but I didn’t expect to be up in less than an hour either. Fair enough, it was steep and sweat was poured royally, but to arrive up there and find gadget-stands selling medals to award yourself for this ‘accomplishment’ seemed rather hilarious to me. If you walked it on high heels, yes maybe. Don’t get me wrong, I applaud the hiking-sport made more accessible to the lesser-fit city crowds, even if that means the mountains are scarred with actual stairs and handrails, as it for sure beats the hell out of couch-potato’ing the weekend away in front of a TV… but forcing the masses on this crowded trail, which is urged to be walked back along the exact same route, totalling maybe 10km tops? Nah, I refuse.
​
Instead, I used the red crosses on the provided trail map, indicating the “dangerous no-go zones” as my route markers for the day, as I figured that would properly scare the herds away. It truly did. And the so-called hazardous snow slides? Melted already, mostly!
I followed the ridge of the Hoverla, offering magnificent panoramic views in all directions, and descended its uneven slippery trails. Then I climbed another mountain. And another, and why not, yet another one, while slowly slithering back into the countryside passing gleaming fields trampled by wild horses and muddy dirt roads leading towards deserted wooden farms, haystacks half taken by the fierce winds. Hours went by, demanding more and more of my feet, but less and less of my brain as there was absolutely nothing to distract me. No sounds, no voices, no questions… just the gradual motion of nature and the distant shadow of the Hoverla growing larger towards me as the sun went down.

I felt the presence of Romania. My favorite region, traditional Maramures, luring behind those icy peaks. I reconnected with Poland, where the complicated muddiness and non-vaseline approach of these steep trails are indistinguishable. And I felt Serbia, where I visited the same mountain range two years ago, ready to be soon re-explored again. I love the Carpathians in Romania, Poland, and Serbia, and as it turns out, I love them very much in Ukraine as well. I leaned back in my log cabin with 30km under my feet. Content. No medals needed, I got my reward.
This was one of the most intriguing spots during this hike. It doomed up in the middle of the forest, out of nowhere. 45 stones, 45 lives. I strolled passed the tilted, overgrown tombs and suddenly noticed that all these men died on the exact same date: 30-08-1916, all of Austrian descent. I knew WWI started after Austria-Hungary declared war on Serbia after Franz Ferdinand was assassinated, which explains their presence here. Ukraine was however still Russian territory back then, but nationalist movements were fierce and the Ukrainians were split into two separate and opposing armies, with 3.5 million fighting for the Imperial Russian Army, and another 250,000 fighting alongside the Austro-Hungarian Army, many Ukrainians thus ending up fighting each other… either helping these 45 men, or helping to kill them instead. The internet won’t provide me with any additional information. Just my own two eyes seeing this concealed spot in a remote forest leaning towards a mountain, where 45 people, who all had their own thoughts, ideas, approaches to life, future perspectives and close ones who loved them, found their sudden death. Wiped out and forgotten in one single day, one single second perhaps. That stuff gets to me.
In order to support the travelers’ community, I spend many hours per week to adequately document all information and advices for prospective visitors, accompanied by a (hopefully) entertaining insight into my personal observations and experiences. This service is and will remain free. However, if you voluntarily want to make a contribution and support my travels and thus the creation of new stories and information supply, here is the button you’re looking for:
Donate
Related:
- Discover England: Bath, Brighton, Isle of Wight, Portsmouth and London!
​- Go Green, Go Scotland: Easdale, Edinburgh, Glasgow, Glencoe / The Highlands and Isle of Skye
- Geocaching Wales: Cardiff & Region
​- In search of Harry Potter: Rowling's hometown, Hogwarts, Hagrid's Hut and a ride in the Hogwarts Express
- Unravel the mysteries of Serbia
​- Europe's best skiing & hiking: Get your ass over to jaw-dropping Switzerland!
​- Budget Bucket List hitchhike trip to... Kosovo!
​​​- Guest Blog 'Kosovo Girl Travels': Travel tips and stories from Kosovo's first and only travelblogger!
- Be about Bulgaria: Check off Bansko, Belogradchik, Plovdiv, Sofia and of course Veliko Tarnovo!
- The film locations of Game of Thrones: King's Landing in Sevilla [Spain]
​​- A visit to Lord of the Ring's Hobbiton [Matamata, New Zealand]
​- A housesit next to a Lord of the Rings film location: Port Waikato, New Zealand
​- Citytripping in Denmark's capital: Copenhagen
- Where modern meets classic: Vilnius, Lithuania
​- Discover more Belgium: Antwerp & the most kick-ass Flanders itinerary!
​- 8 ways to save money in Vienna, Austria
- Medieval Holland kept alive: Den Bosch & Haarlem
​- Read about Bosnia & Herzegovina: Mostar, Blagaj, Trebinje, Sarajevo, Jajce, Banja Luka and Sutjeska National Park (incl. Maglic Peak - the country's highest!)
​- 3 reasons why you need to visit Nijmegen [The Netherlands]
- A capital surrounded by scenic little villages: Lisbon, Portugal
- Spanish citytrips: Barcelona, Malaga & Sevilla
​- German gems: Aachen & Frankfurt am Main
​- Abseiling in Banos, Ecuador
​- Graffiti hotspots in South America: Bogota [Colombia],  Sao Paulo & Porto Alegre [Brazil], Valparaiso [Chile], Asunción [Paraguay]
- Get your Albania itinerary ready: Berat, Gjirokastër, Korcë / Ohrid Lake, Theth, Shkodër, Tirana, Mount Korab & the coast!